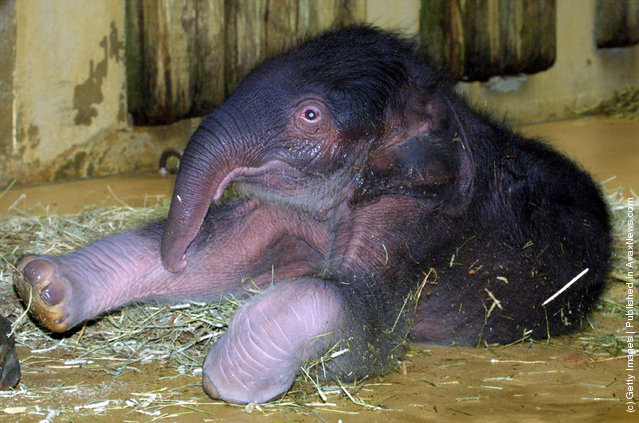 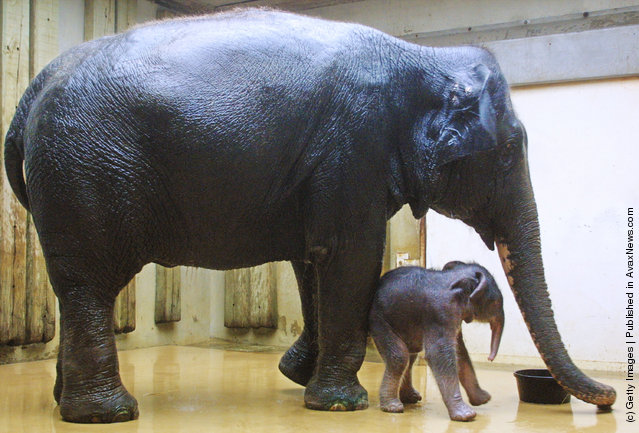 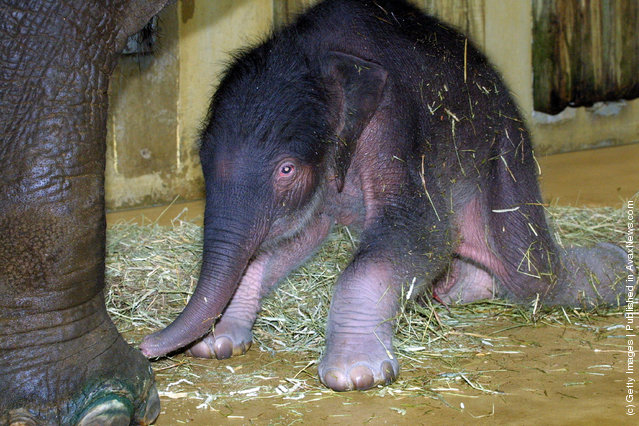 A unnamed baby elephant tries to stand up November 27, 2001 at the National Zoo in Washington, DC. The 325 pounds male calf was born on Sunday and his mother's pregnancy was the fifth successful artificial insemination of an elephant in the world. (Photo by Alex Wong/Getty Images) 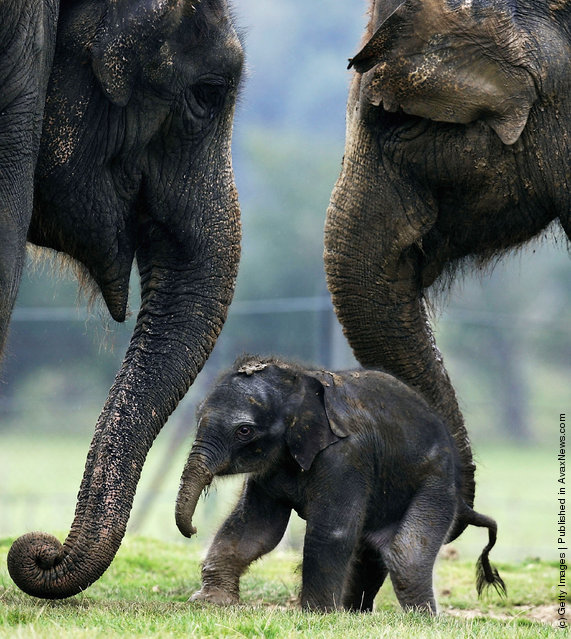 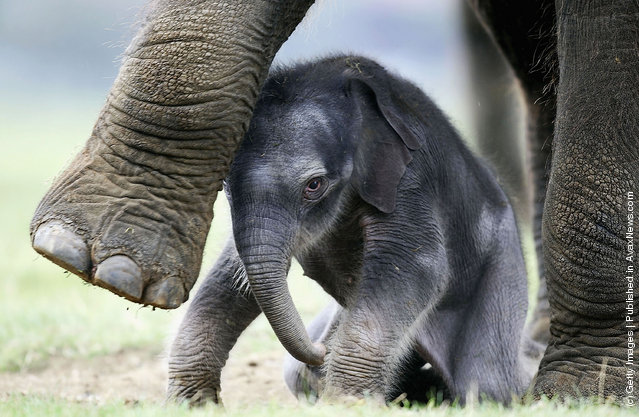 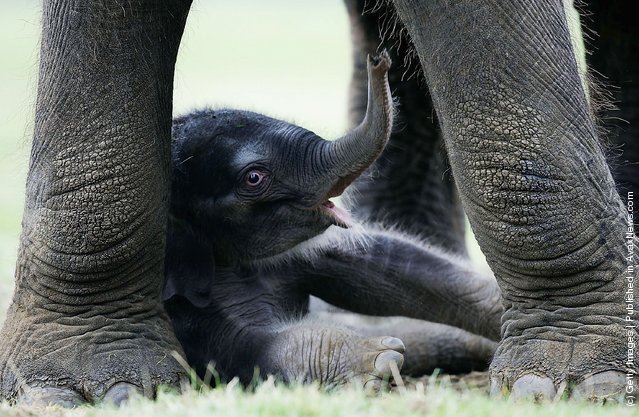 The unnamed Asian elephant calf at a photocall with its mother Azizah at Whipsnade Wild Animal Park on September 29, 2004 in Dunstable, Bedfordshire, England. (Photo by Paul Gilham/Getty Images) 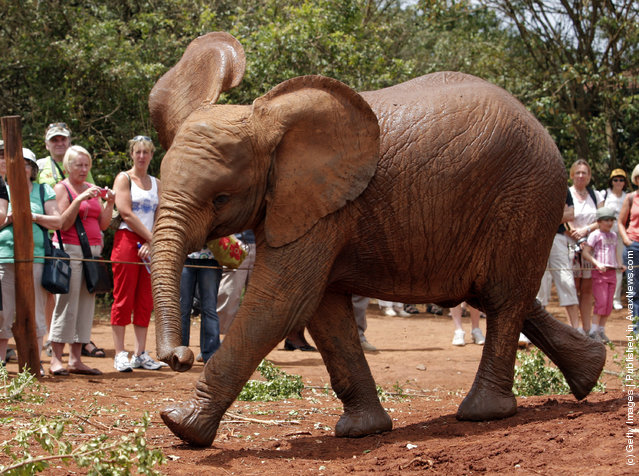 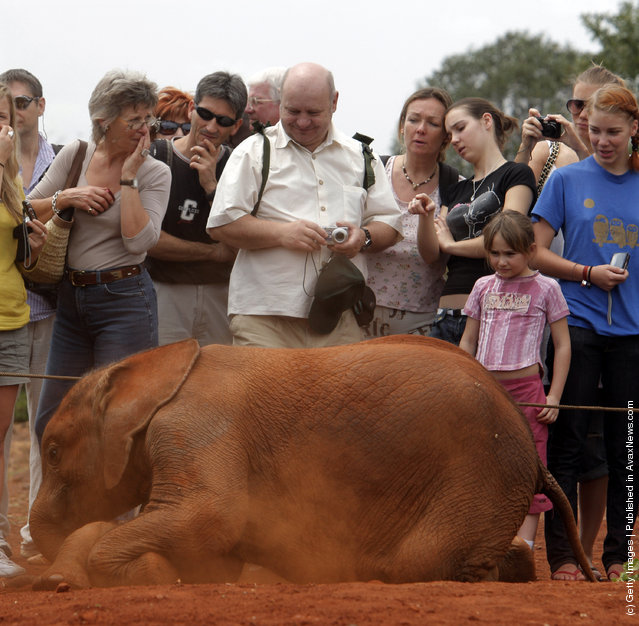 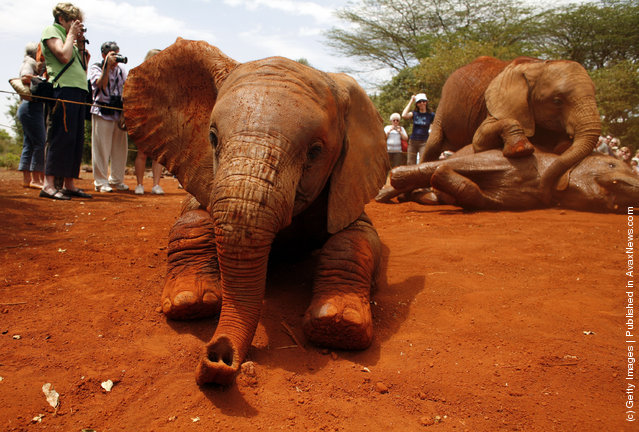 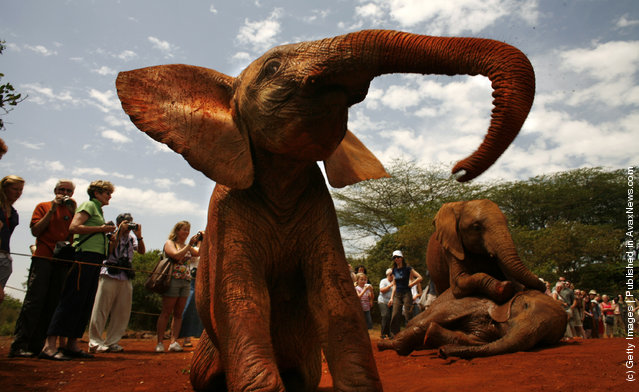 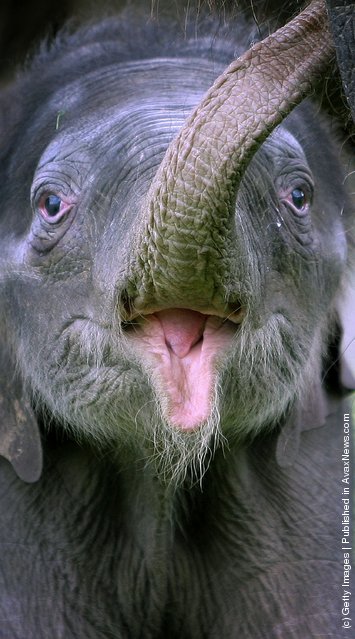 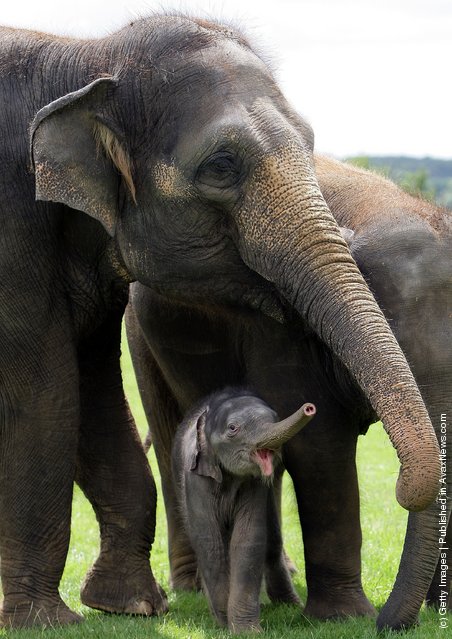 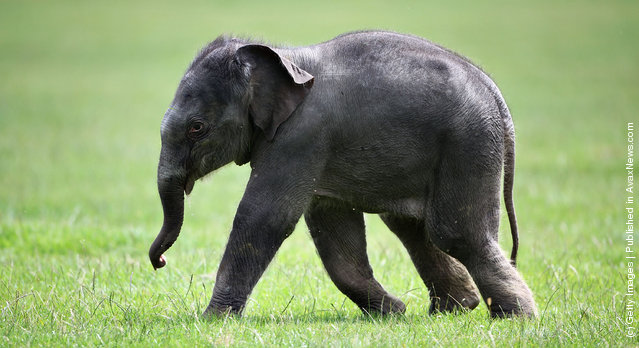 A newborn Asian elephant walks close to other members of its herd at Whipsnade Wild Animal Park on July 28, 2009 in Whipsnade, England. The 6 day old Asian elephant (Elephas maximus), weighed 20 stone at birth and stands at only 3 ft tall. (Photo by Dan Kitwood/Getty Images) 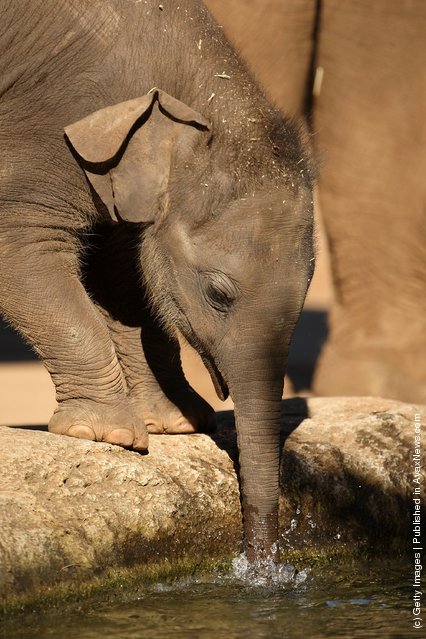 Asian Elephant calf Luk Chai has a drink before a traditional ecumenical Thai blessing for good health and success at Taronga Zoo on August 15, 2009 in Sydney, Australia. To respect the Thai heritage of the elephant and herd, the blessing was performed by a senior Monk along with 8 other Monks from Canberra and Sydney temples, and the occasion was also attended by the former owners and mahout of the mother Thong Dee who travelled from Thailand to attend. (Photo by Mark Kolbe/Getty Images) 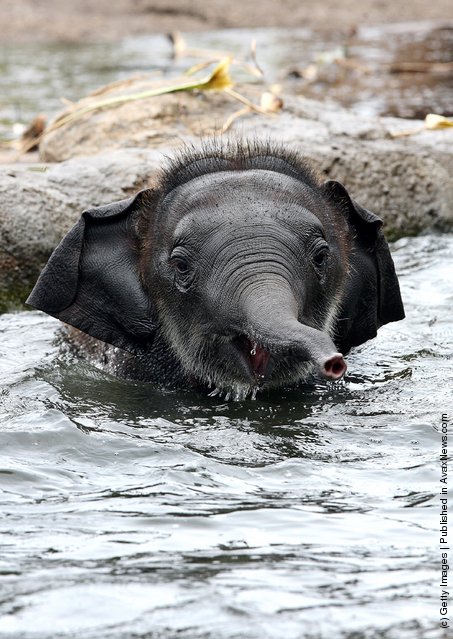 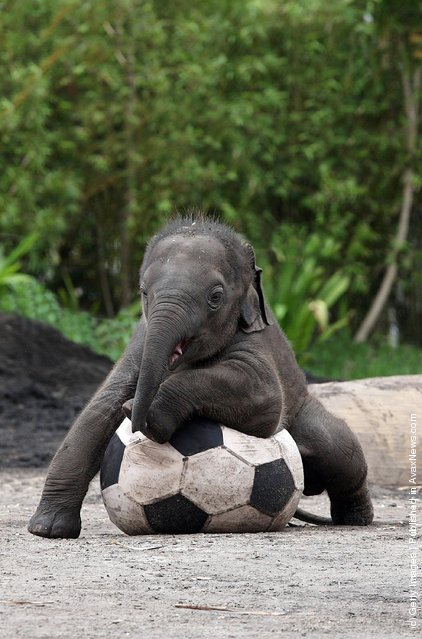 Elephant calf Luk Chai plays with a football in his enclosure at Taronga Zoo on October 27, 2009 in Sydney, Australia. The 4-month old Asian elephant calf was born at the zoo to mother Thong Dee, a former Bangkok street elephant, and was the first calf to be born in Australasia. (Photo by Rick Stevens/Taronga Zoo via Getty Images) 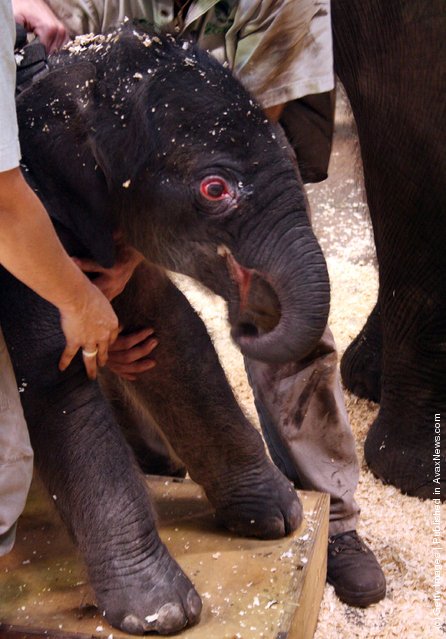 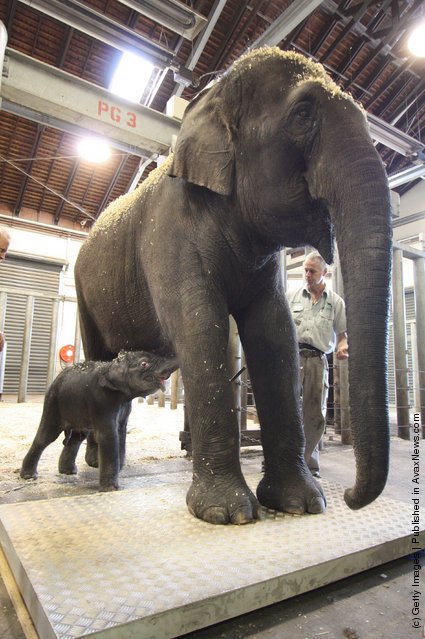 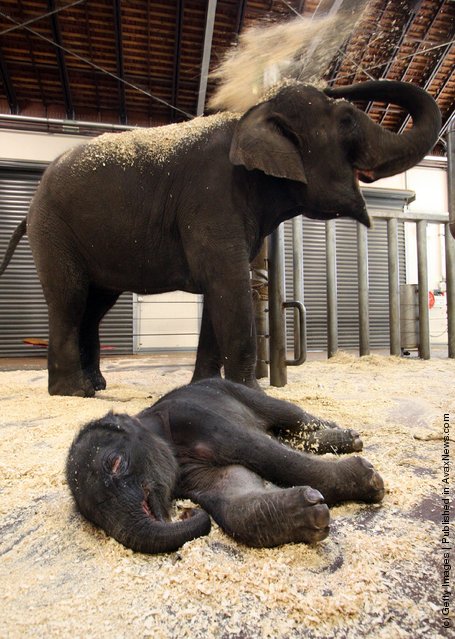 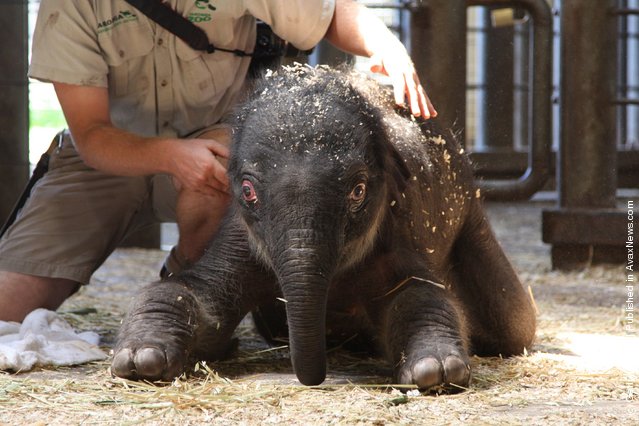 Taronga Zoo's elephant baby, as yet unnamed, is seen at Taronga Zoo on March 12, 2010 in Sydney, Australia. The Asian Elephant calf has continued to make progress following a protracted labour that spanned six days. The calf was originally believed to have died in the womb during labour but surprised veterinarians and zoo staff with an unexpected delivery early Wednesday morning. (Photo by Bobby-Jo Vial/Taronga Zoo via Getty Images) 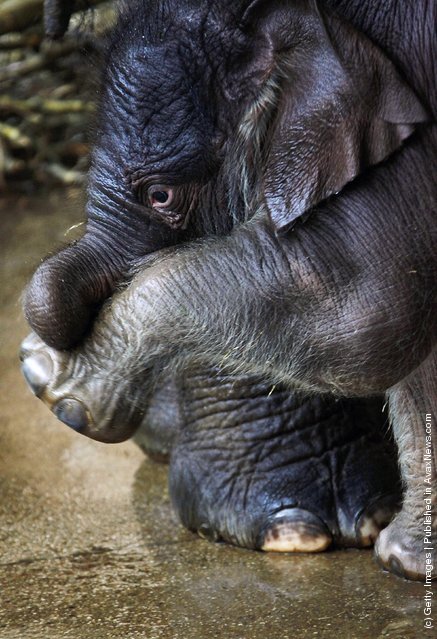 The asian elephant cub Bimas stands close to its mother Cynthia at Tierpark Friedrichsfelde on March 19, 2010 in Berlin, Germany. The baby was born on March 15, 2010. (Photo by Carsten Koall/Getty Images) 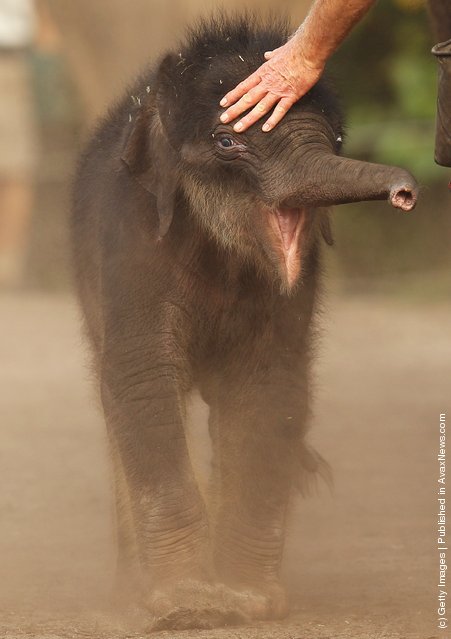 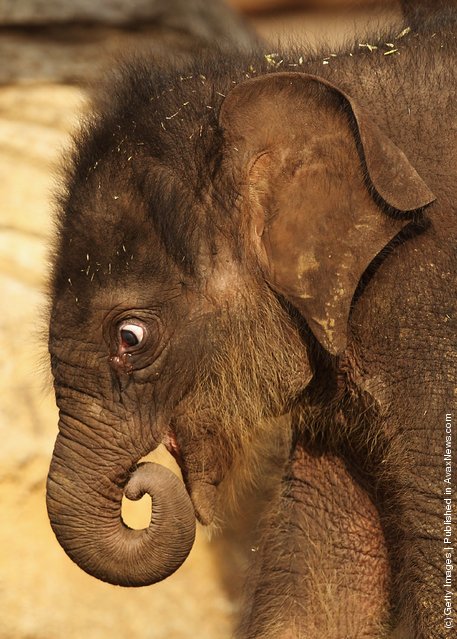 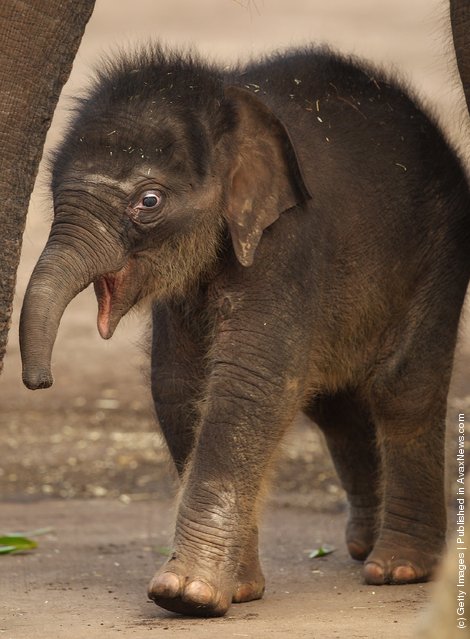 “Pathi Harn” meaning miracle in Thai walks in his enclosure during an official naming ceremony at Taronga Zoo on March 25, 2010 in Sydney, Australia. The elephant calf, born earlier this month, made headlines when he survived a protracted labour that spanned six days after initially being thought to have died in the womb. (Photo by Cameron Spencer/Getty Images)
Edit Del
13 Sep 2011 13:22:00, post received 0 comments
Publication archive:
←   →
Popular tags:
All tags
Last searches: