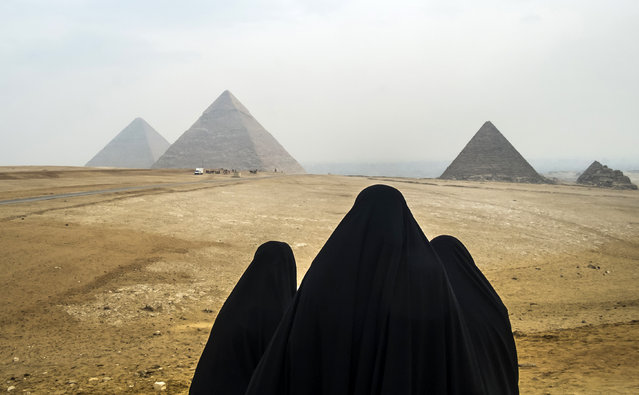 Women wearing veils look at the Great Pyramids of Giza as they stand from across the Giza plateau, on the southwestern outskirts of the Egyptian capital Cairo on February 15, 2018. (Photo by Khaled Desouki/AFP Photo) 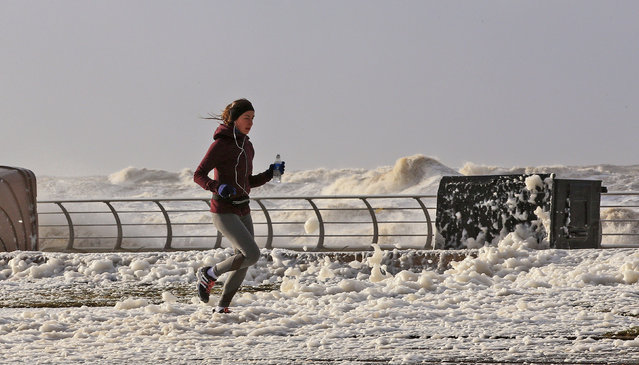 A woman jogs through sea foam in Blackpool northwest England as a storm lashed Britain with violent storm-force winds of up to 100mph, leaving thousands of homes without power and hitting transport links Wednesday January 3, 2018. (Photo by Peter Byrne/PA Wire via AP Photo) 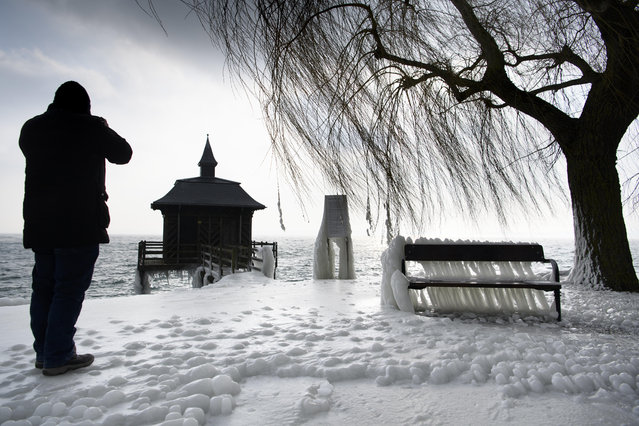 A man taking pictures of an ice-covered bench, on the frozen shores of the Lake of Neuchatel, in Gorgier, Switzerland, Wednesday, February 28, 2018. A cold spell has reached central and eastern Europe with temperatures far below the freezing point. (Photo by Laurent Gillieron/Keystone via AP Photo) 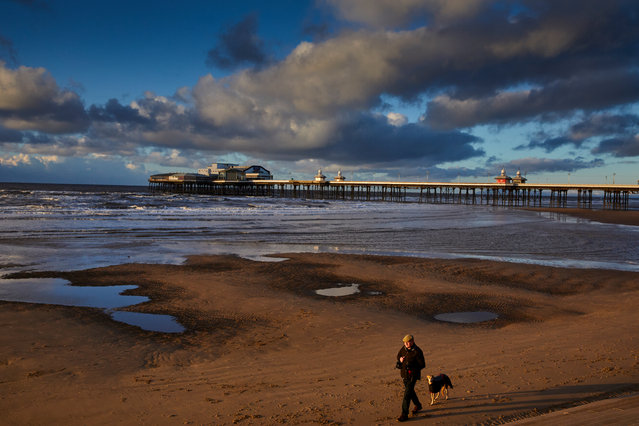 A dog walker at low tide in Blackpool, Rngland on December 28, 2017. (Photo by Christopher Thomond/The Guardian) 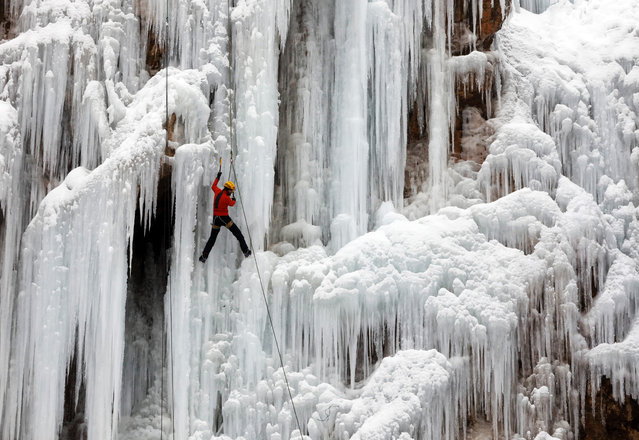 An Iranian ice climber scales an ice cliff and frozen waterfall at the Meygun ice climbing club, in the village of Meygun, northeast of the capital of Tehran, Iran, 26 January 2018. According to Mehid Panahipour, the owner of the school, every year around thousands of professionals and students attend the school, adding that government support would help the club host international competitions. (Photo by Abedin Taherkenareh/EPA/EFE) 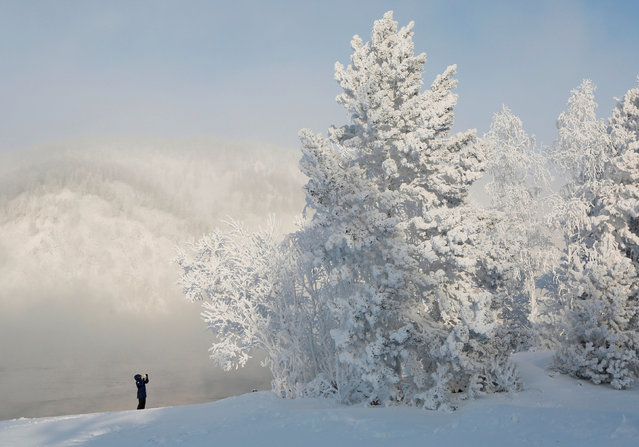 A woman takes pictures on a bank of the Yenisei River covered with snow and hoarfrost, with the air temperature at about minus 34 degrees Celsius (minus 29.2 degrees Fahrenheit), outside Krasnoyarsk, Russia, January 22, 2018. (Photo by Ilya Naymushin/Reuters) 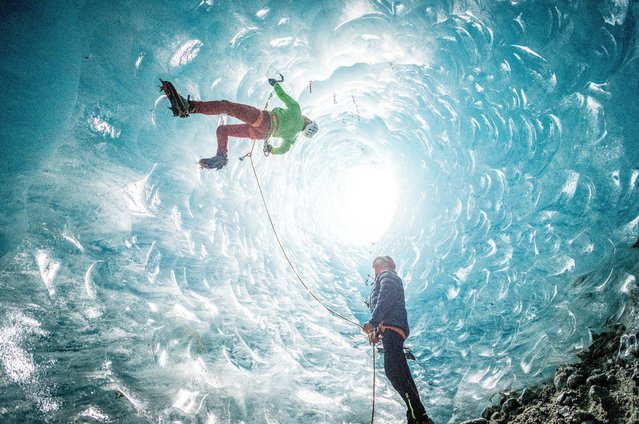 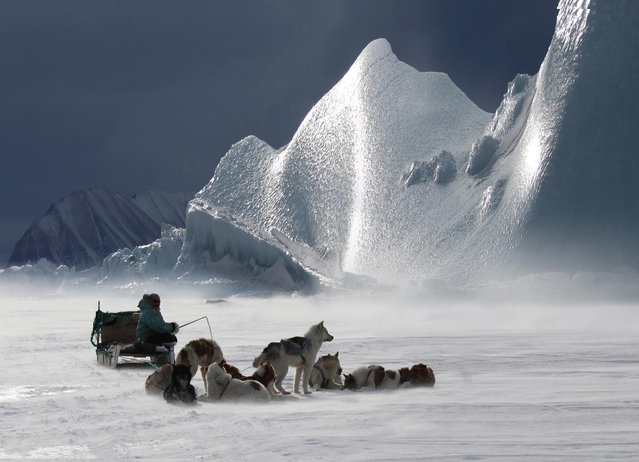 A hunter and his sled dogs are seen in Greenland, April 30, 2013. Dogs are commonly hailed as “human's best friend”, and assist people in many ways. Let's review the moments brought by dogs to greet the approaching Chinese Lunar Year of the Dog. The Chinese Lunar New Year, also known as the Spring Festival, falls on Feb. 16 this year. This year's celebration will usher in the Year of the Dog. The dog comes 11th in the 12-animal zodiac rotation used by the Chinese to represent the year. (Photo by Xinhua/Barcroft Images) 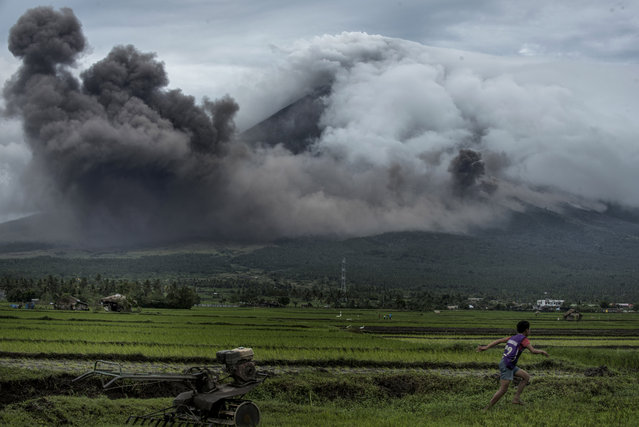 A boy runs as pyroclastic clouds emit from Mayon volcano on January 17, 2018 in Camalig, Philippines. Thousands evacuate as Philippines' Mayon volcano started to spew lava and ash as Philippine Volcanology Institute describes the event as a quiet eruption. Alert level 3 has been issued by authorities and warned that the activity could lead to eruptions of magma. (Photo by Jes Aznar/Getty Images) 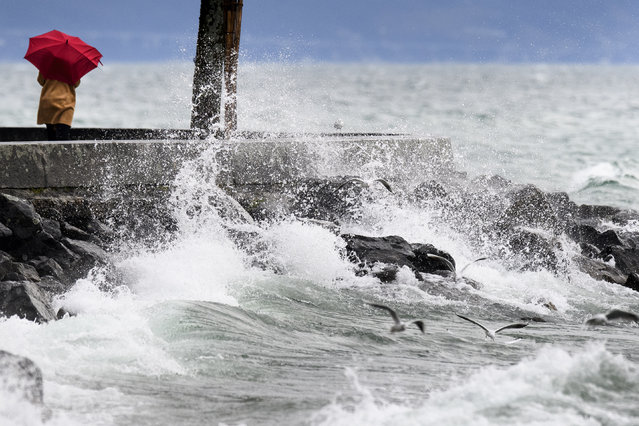 Big waves pound the lakeside promenade on the Lake of Geneva, in the Ouchy Harbour, in Lausanne, Switzerland, Wednesday, January 3, 2018. The Storm Burglind is expected to cause strong gusts of wind of up to 150 kilometers per hour in some mountain areas. (Photo by Laurent Gillieron/Keystone via AP Photo) 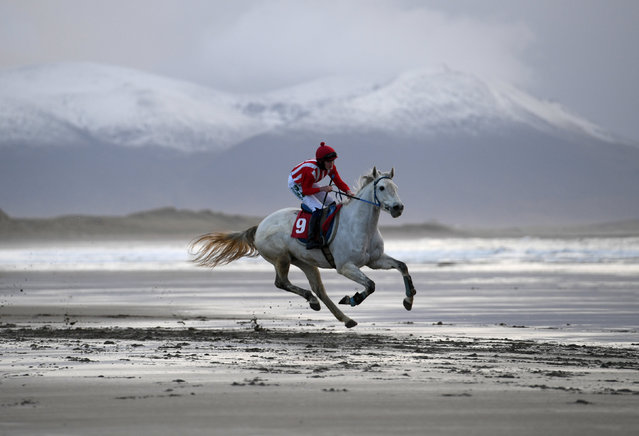 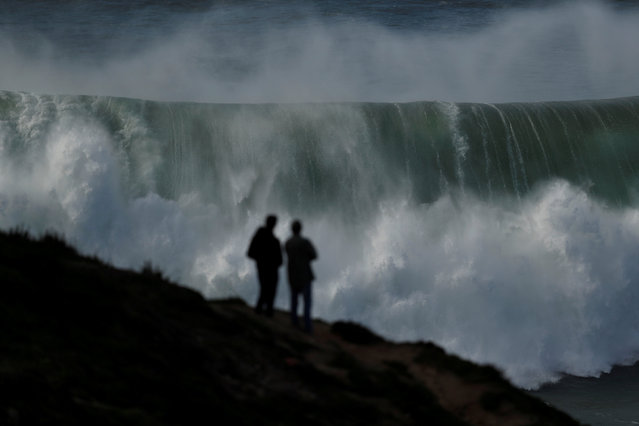 People gather to watch a tow-in surfing session at Praia do Norte in Nazare, Portugal December 30, 2017. (Photo by Rafael Marchante/Reuters) 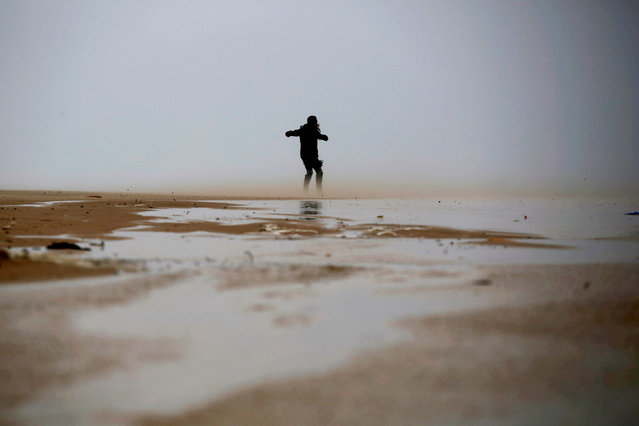 A woman walks against the wind during a storm in Zikim beach, on the Mediterranean coast near the southern city of Ashkelon, Israel January 5, 2018. (Photo by Amir Cohen/Reuters) 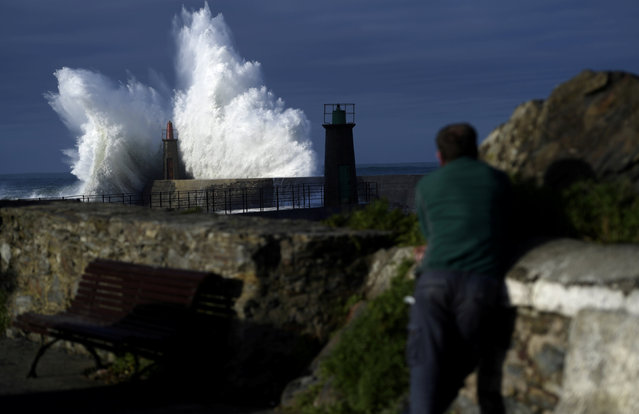 A man looks at waves as they crash against a lighthouse in the port town of Viavelez, Spain, January 18, 2018. (Photo by Eloy Alonso/Reuters) 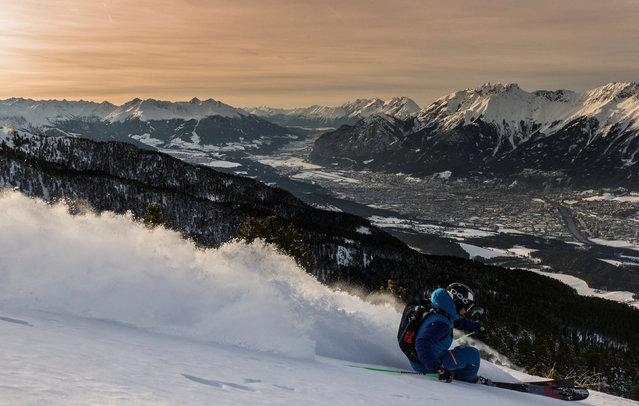 A skier is pictured in front of the Inntal valley in Tulfes, January 24, 2018. (Photo by Dominic Ebenbichler/Reuters) 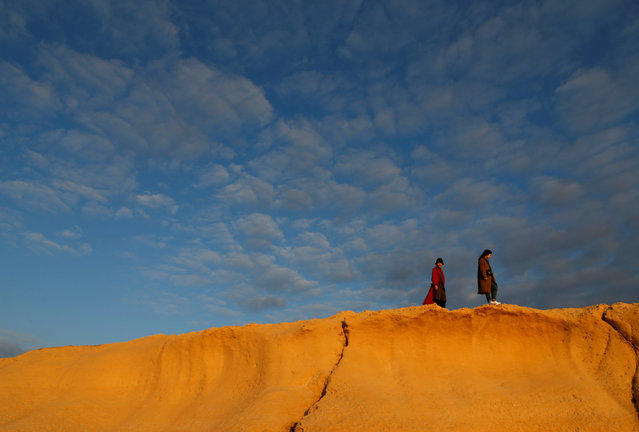 Tourists walk along the coastline at Dwejra outside the village of San Lawrenz on the island of Gozo, Malta, January 25, 2018. (Photo by Darrin Zammit Lupi/Reuters) 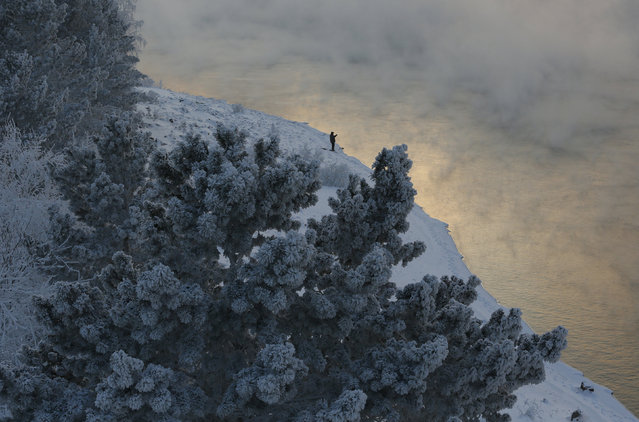 A fisherman is seen on a bank of the Yenisei River at sunset near the Krasnoyarsk hydro electric power station, with the air temperature at about minus 32 degrees Celsius (minus 25.6 degrees Fahrenheit), outside Krasnoyarsk, Russia January 26, 2018. (Photo by Ilya Naymushin/Reuters) 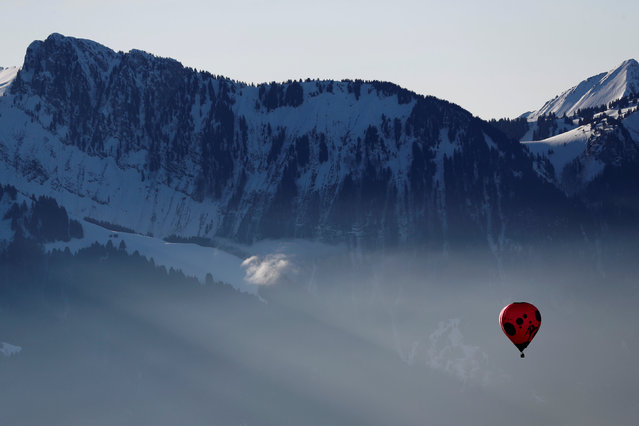 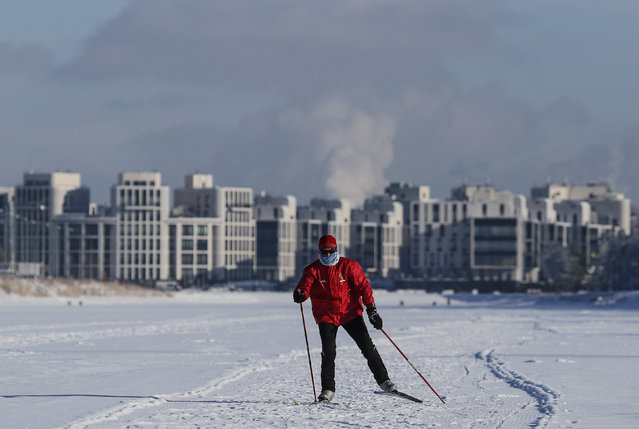 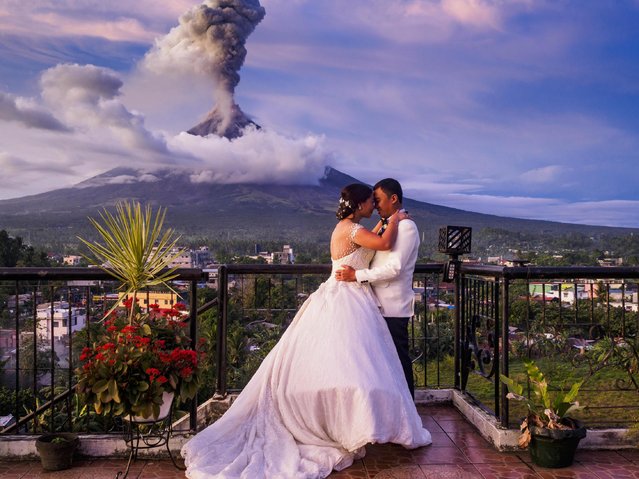 Arlo Dela Cruz and Maica Nicerio-Dela Cruz on their wedding day with the Mayon volcano erupting in the background, in Daraga, Albay, Philippines on January 25, 2018. They were married earlier in the afternoon at Our Lady of the Gate Parish. After their wedding they walked out to Red Labuyo restaurant and the volcano started its eruption. The Mayon volcano continued to erupt Thursday. The airport in Legazpi is closed until at least 31 January 2018. (Photo by ZUMA Press/Alamy Stock Photo)
Edit Del
02 Mar 2018 00:05:00, post received 0 comments
Publication archive:
←   →
Popular tags:
All tags
Last searches: