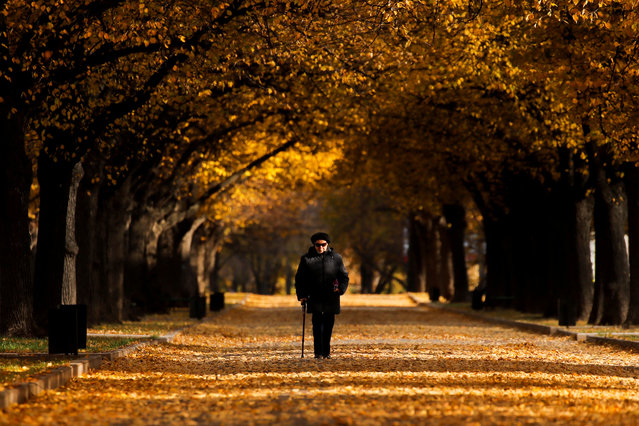 A woman walks under the trees with autumn coloured leaves in Moscow, Russia on October 8, 2019. (Photo by Maxim Shemetov/Reuters) 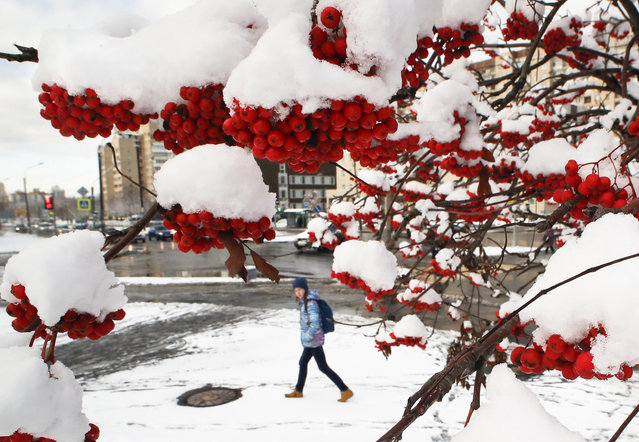 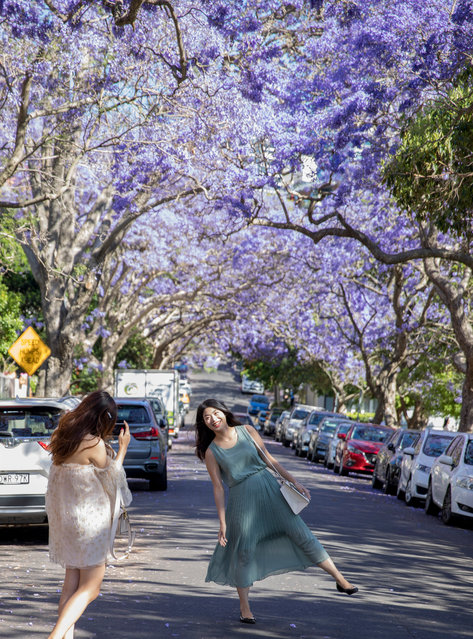 People taking photos amongst jacaranda trees on McDougall Street in the North Sydney suburb of Kirribilli on November 22, 2019 in Sydney, Australia. Jacaranda trees are not native to Australia, but can be found around Sydney and are popular for their stunning purple blooms in spring which attract hundreds of Instagrammers seeking a perfect image with the colourful flowers. (Photo by MicheleMossop/The Guardian) 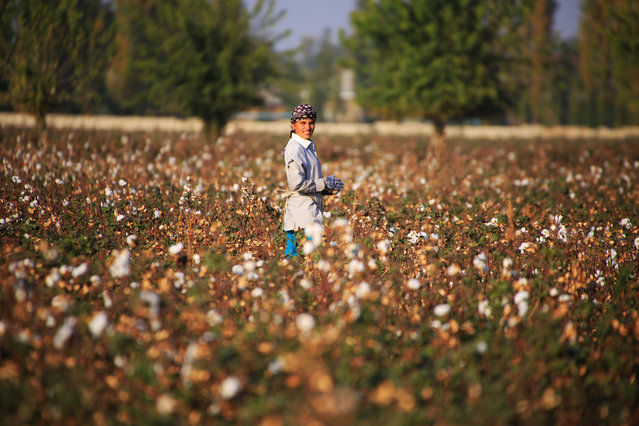 A Uzbekistan's cotton grower looks on as she works in a cotton plantations outside Tashkent, on October 24, 2019. A small revolution is taking shape in Uzbekistan: the State wants to eradicate forced labour in its cotton industry, after having, for decades, forced hundreds of thousands of Uzbeks to work during the harvest. (Photo by Yuriy Korsuntsev/AFP Photo) 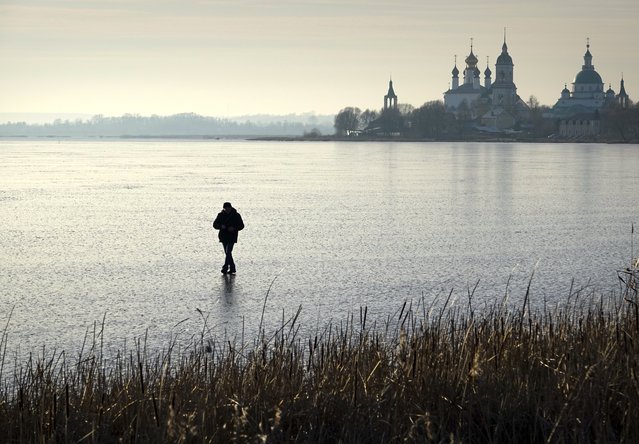 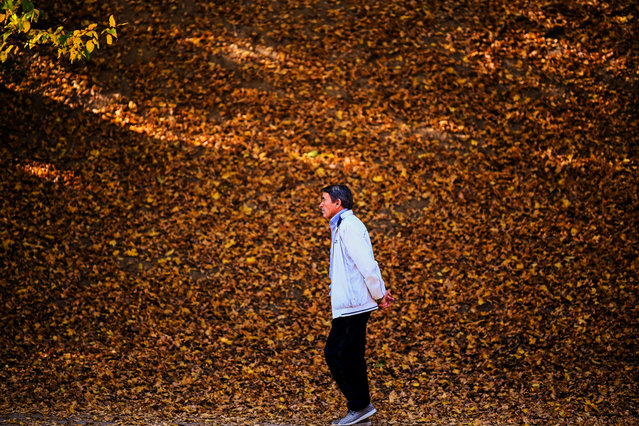 A man walks in the park, covered with fallen yellow leaves, near Pristina, Kosovo on October 23, 2019. (Photo by Armend Nimani/AFP Photo) 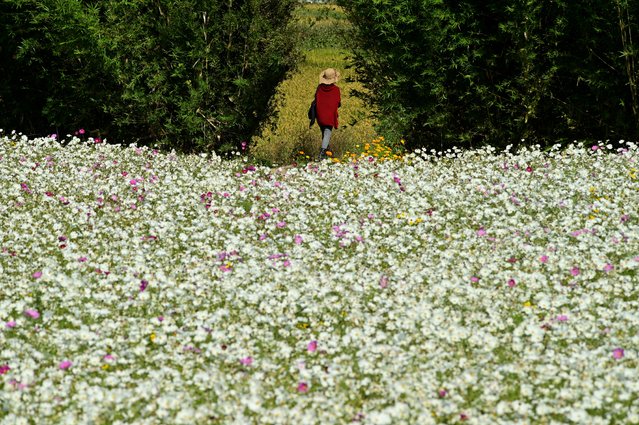 A woman walks in a flower field in Pingchang District in Taoyuan, northern Taiwan on November 26, 2019. (Photo by Sam Yeh/AFP Photo) 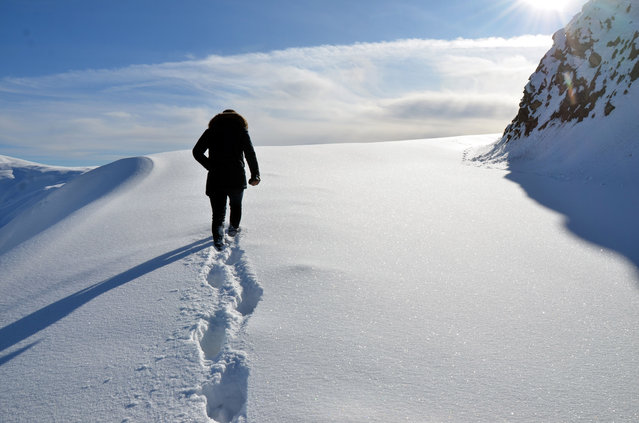 A man walks along a road covered in snow in Mus province of Turkey on December 03, 2019. (Photo by Sabri Yildirim/Anadolu Agency via Getty Images) 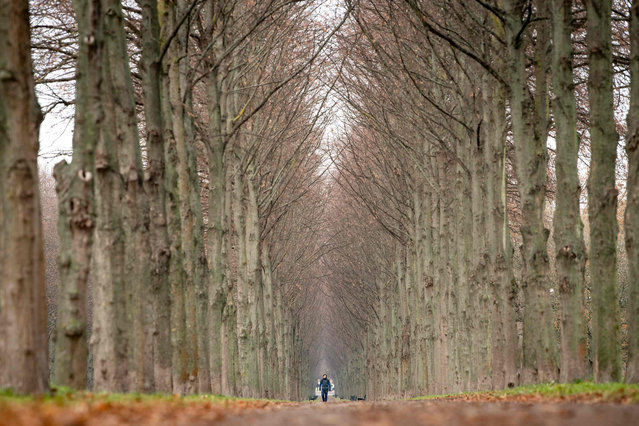 A man walks his dog past trees in Herrenhausen gardens in Hannover, Germany on December 2, 2019. (Photo by Sina Schuldt/dpa) 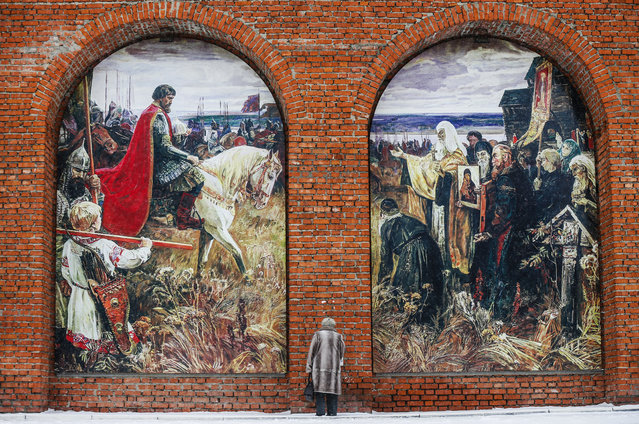 Russian woman stands in front of the wall of the Kolomna Kremlin with huge painting of “Dmitry Donskoy assembles an army against the Tatars” in Kolomna, Russia, 12 February 2016. Kolomna Kremlin was built by the order of Russian tsar Vasily III from 1525-1531 to imitate the Moscow Kremlin. (Photo by Sergei Ilnitsky/EPA) 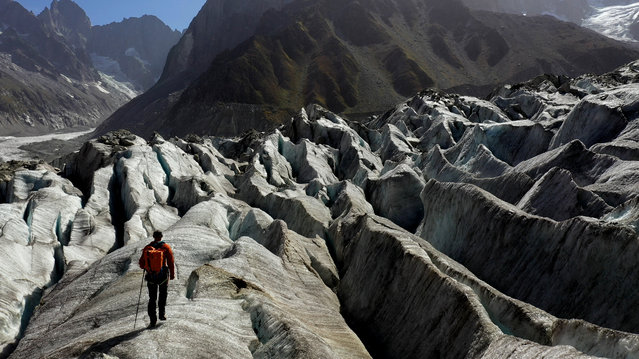 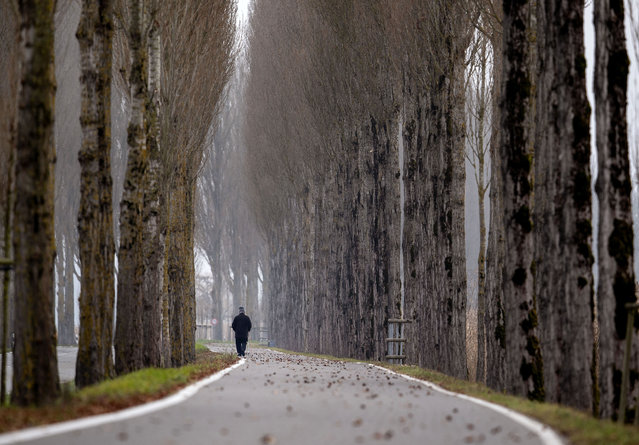 A man walks between trees on the Reichenau island near Constance, Germany, Thursday, December 5, 2019. (Photo by Michael Probst/AP Photo) 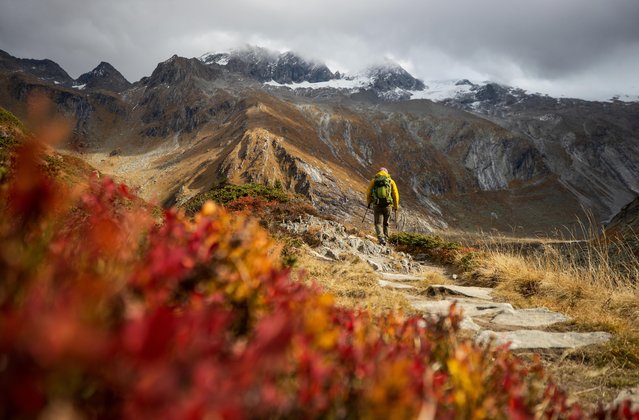 A hiker walks in the Zillertal Alps during an autumn day near the village of Ginzling, Austria, October 15, 2019. (Photo by Lisi Niesner/Reuters) An oil spill is seen on “Sitio do Conde” beach in Conde, Bahia state, Brazil on October 12, 2019. (Photo by Adriano Machado/Reuters) 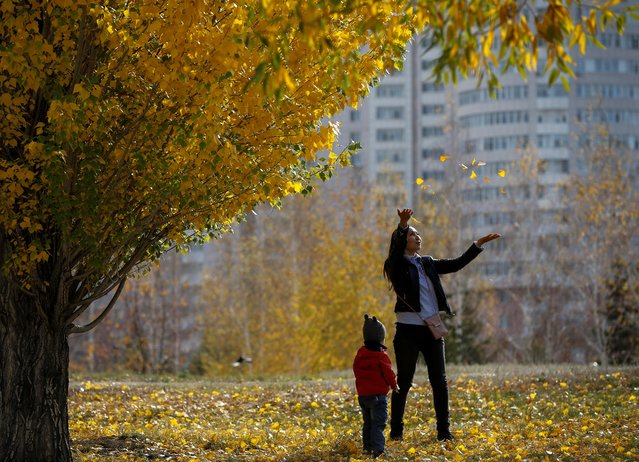 A woman throws autumn leaves in a park in Nur-Sultan, Kazakhstan on October 11, 2019. (Photo by Pavel Mikheyev/Reuters) 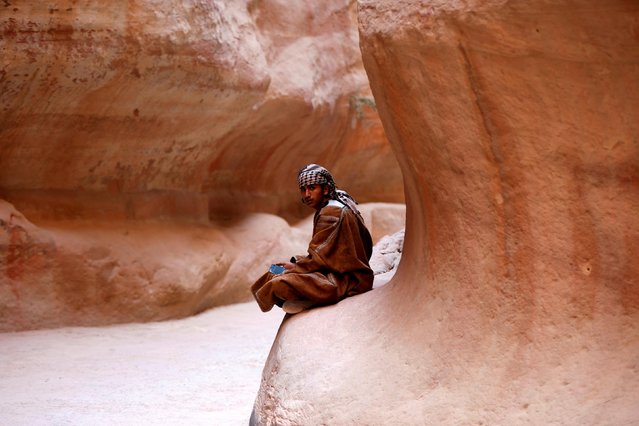 Bedouin young man sits in the Siq in the ancient city of Petra, south of Amman, Jordan, November 21, 2019. (Photo by Muhammad Hamed/Reuters) 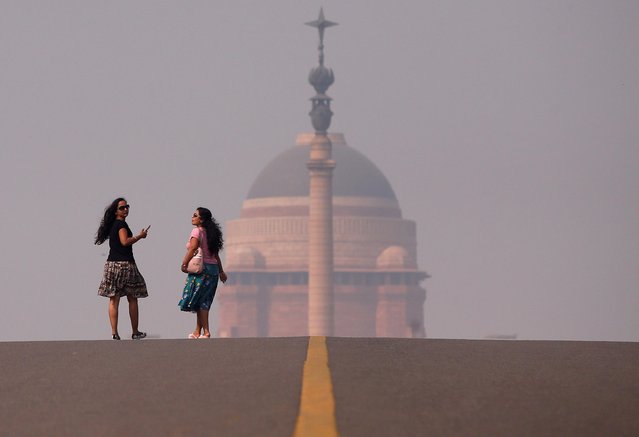 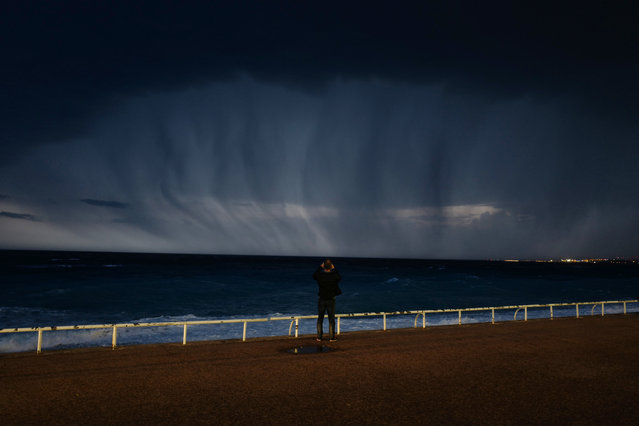 A man looks at a thunderstorm above the Mediterranean sea on the French Riviera city of Nice, on October 23, 2019. The Bouches-du-Rhone, Var and Vaucluse departments were placed on orange alert joining six other departments in the south of France following flooding overnight which closed some road networks along the coast and which also forced some people to evacuate their homes. (Photo by Valery Hache/AFP Photo) 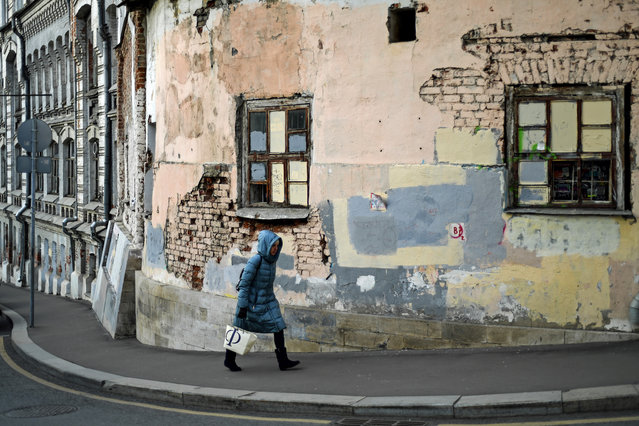 A woman walks along a street in the old neighborhood east of the Kremlin known as Kitai-Gorod, which dates from the 1500s, in Moscow on November 21, 2019. (Photo by Kirill Kudryavtsev/AFP Photo) 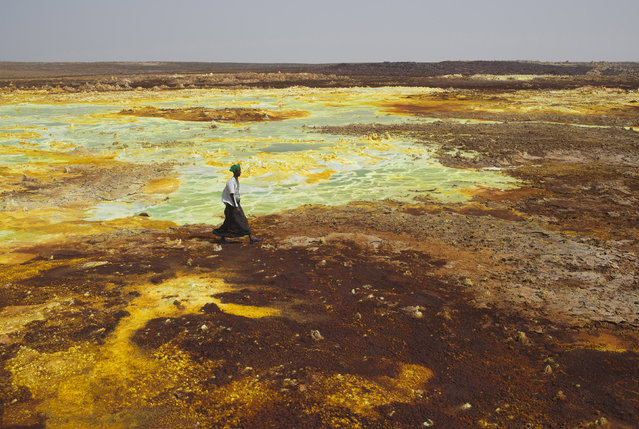 A man walks on sulphur and mineral salt formations near Dallol in the Danakil Depression, northern Ethiopia April 22, 2013. The Danakil Depression in Ethiopia is one of the hottest and harshest environments on earth, with an average annual temperature of 94 degrees Fahrenheit (34.4 Celsius). For centuries, merchants have travelled there with caravans of camels to collect salt from the surface of the vast desert basin. The mineral is extracted and shaped into slabs, then loaded onto the animals before being transported back across the desert so that it can be sold around the country. (Photo by Siegfried Modola/Reuters)
Edit Del
11 Dec 2019 00:01:00, post received 0 comments
Publication archive:
←   →
Popular tags:
All tags
Last searches: