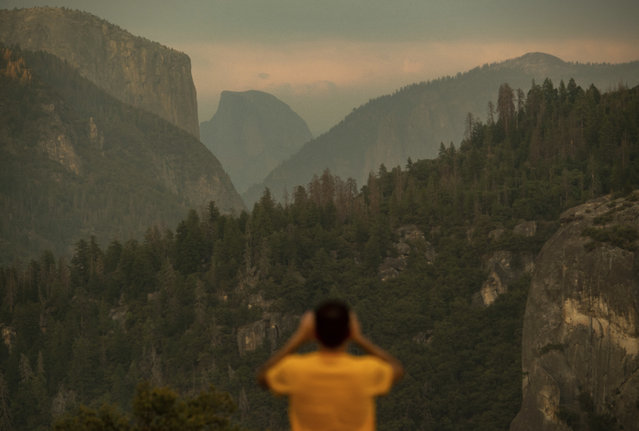 Francisco Avendano, visiting from Madrid, Spain, photographs Half Dome as smoke from the Ferguson Fire hangs over Yosemite National Park, Calif., on Tuesday, July 24, 2018. Parts of the park, including Yosemite Valley, will close Wednesday as firefighters work to contain the blaze. (Photo by Noah Berger/AP Photo) 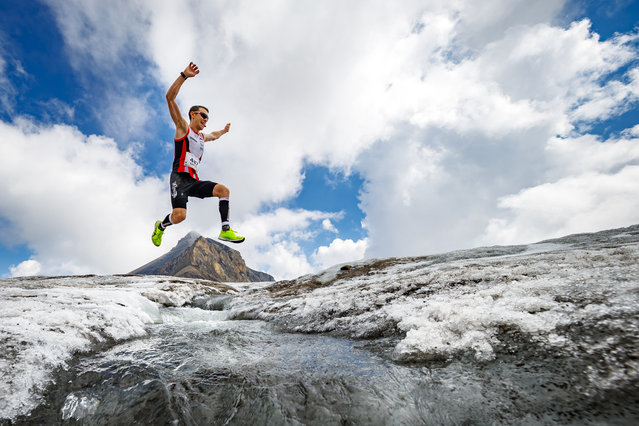 A participant jumps above a water stream on the Tsanfleuron glacier approaching the finish line of the Glacier 3000 run above the alpine resort of Les Diablerets, Switzerland, Saturday, August 4, 2018. The 26 kilometer-long course starts at 1050 meters above sea level in the village of Gstaad reaching a final altitude of 2950 meters on the “Glacier 3000” for a total elevation gain of 2015 meters along the course. (Photo by Valentin Flauraud/KEYSTONE) 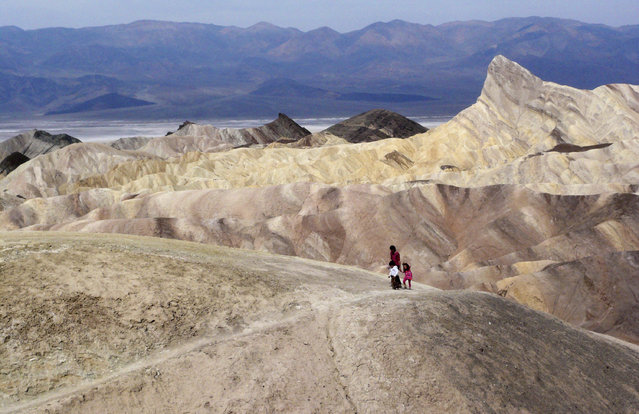 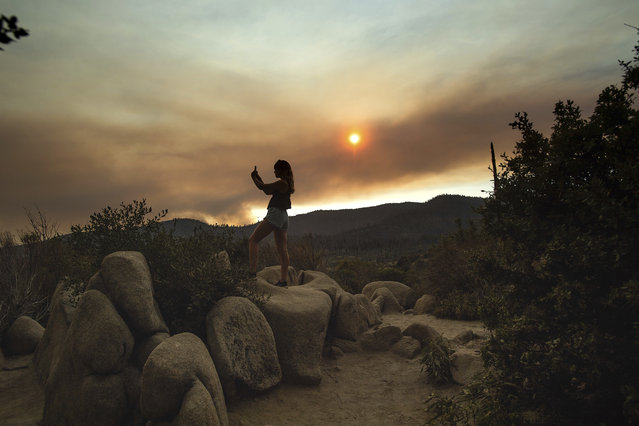 Mara Schumann photographs a plume of smoke from the Ferguson Fire in Yosemite National Park, Calif., on Tuesday, July 24, 2018. Parts of the park, including Yosemite Valley, will close Wednesday as firefighters work to stop the blaze. (Photo by Noah Berger/AP Photo) 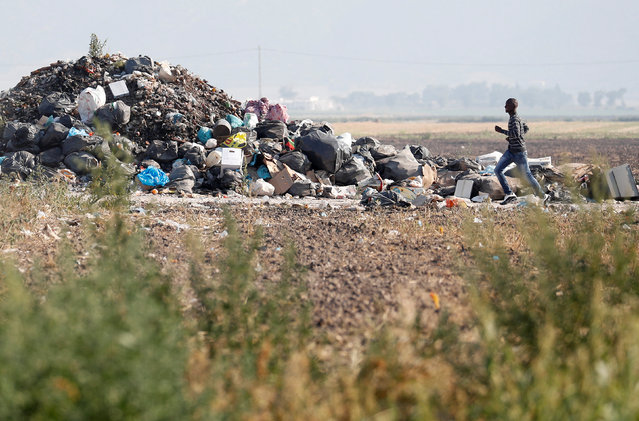 An African migrant laborer runs near a heap of garbage outside the camp known as the “Great Ghetto” near Foggia, Italy on August 8, 2018. The camp was bulldozed by the authorities following a fire that killed three migrants. But with accommodation at a premium, the ghetto has risen again from the rubble - a shanty town of tiny shacks made of corrugated iron and wooden planks. Home to up to 1,000 people, it has zero amenities. Other migrants live in an official, albeit overcrowded and decrepit refuge, which has running water and electricity. It was set up last year after the Great Ghetto was bulldozed. (Photo by Alessandro Bianchi/Reuters) 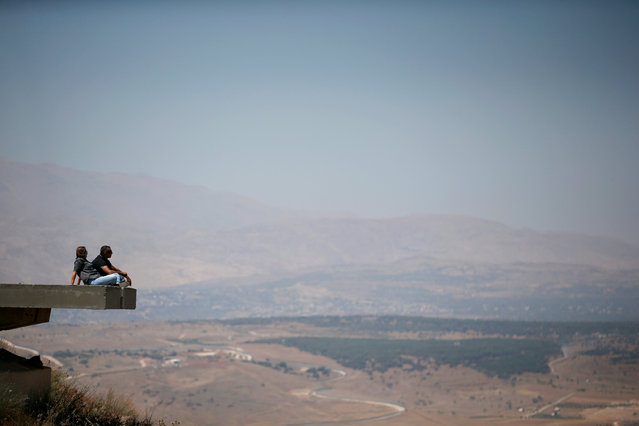 An Israeli couple sit together watching the Syrian side of the Israel-Syria border on the Israeli-occupied Golan Heights, Israel July 7, 2018. (Photo by Ronen Zvulun/Reuters) 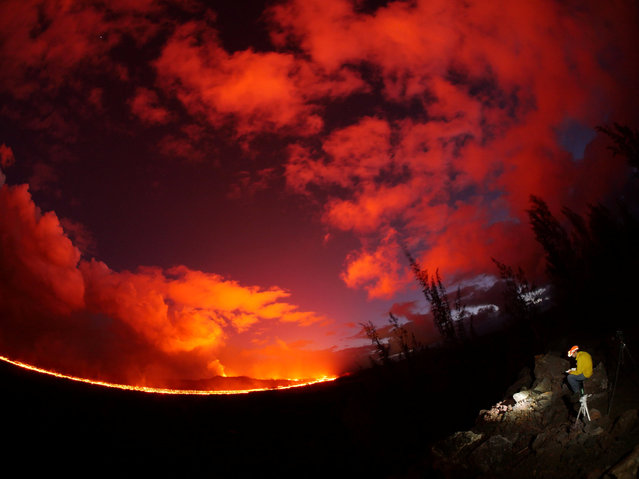 A USGS geologist making observations of the fissure 8 lava channel at sunset is pictured in this July 3, 2018 fisheye lens handout photograph near the Kilauea volcano eruption in Hawaii, U.S. (Photo by USGS/Handout via Reuters) 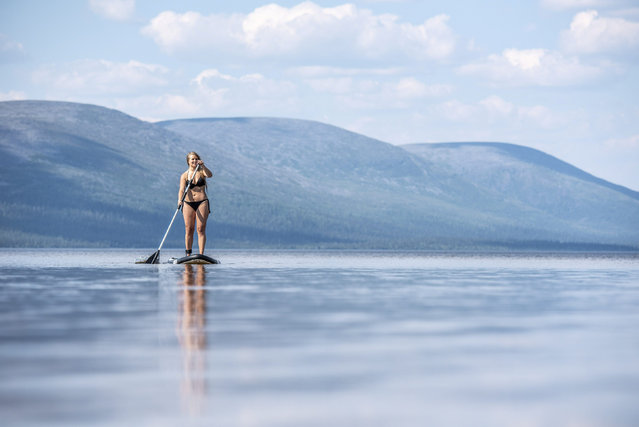 A woman enjoys the warm weather while paddling on the Pallasjarvi lake in Kittila, Lapland, Finland July 18, 2018. (Photo by Otto Ponto/Reuters/Lehtikuva) 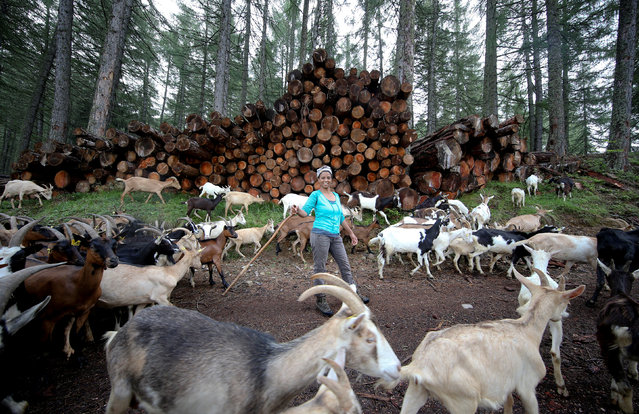 Agitu Idea Gudeta has built up a thriving business in her adopted Italy making goat's cheese and beauty products in just a few years since fleeing her native Ethiopia in 2010 over a land dispute. (Photo by Alessandro Bianchiethiopia/Reuters) 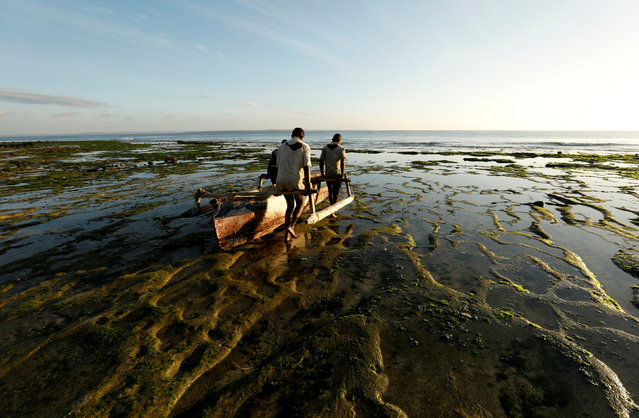 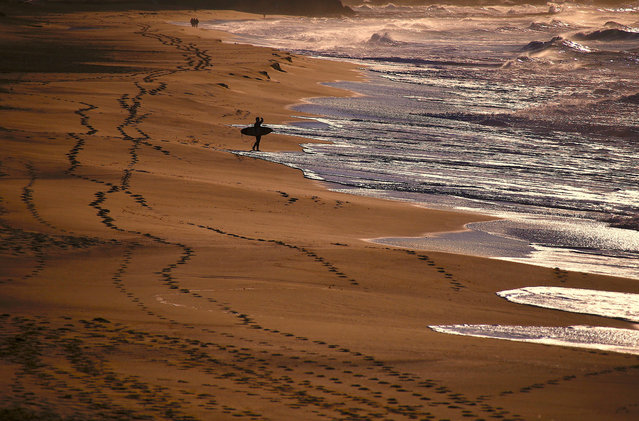 People walk along the beach as a surfer holding his board looks at the waves on Merewether Beach in Newcastle, located north of Sydney, Australia on August 13, 2018. (Photo by David Gray/Reuters) 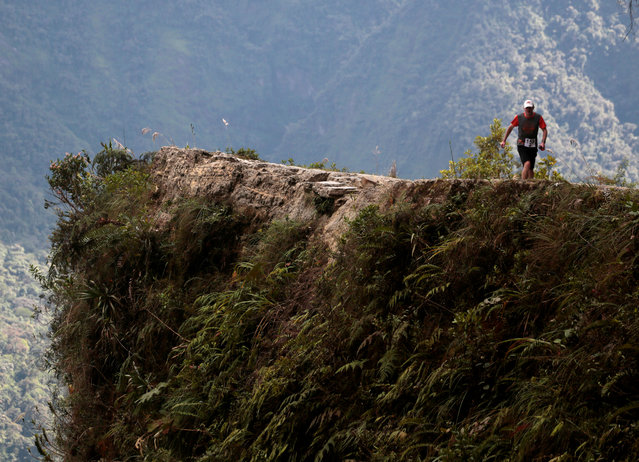 A competitor runs during the Bolivia Sky Race on the “Death Road” from Yolosa to Chuspipata, near La Paz, Bolivia, July 29, 2018. (Photo by David Mercado/Reuters) 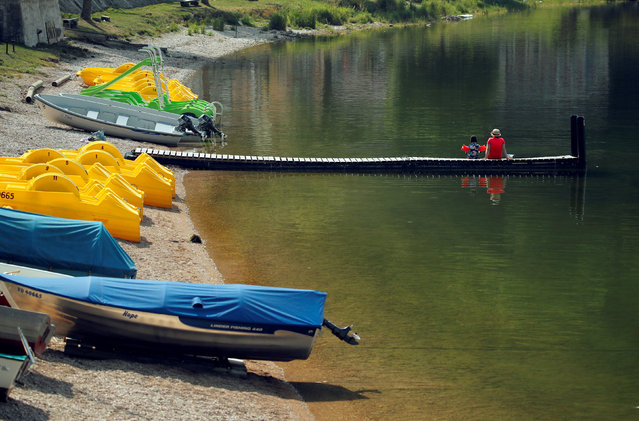 A woman and a child sit on a pontoon on Lac de Joux during a heat wave in Le Pont, Switzerland, July 31, 2018. (Photo by Denis Balibouse/Reuters) 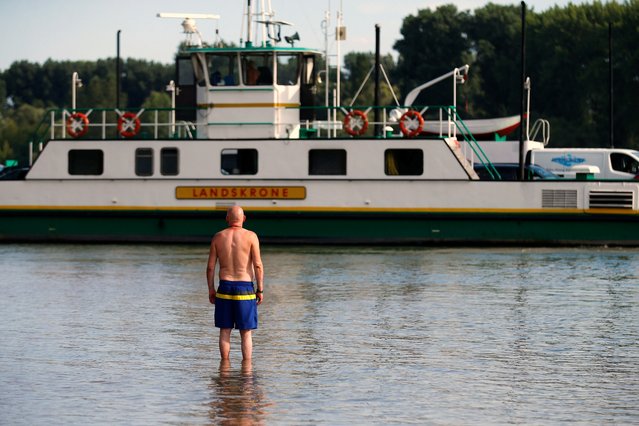 A man relaxes standing in the river Rhine near Geinsheim, Germany on July 30, 2018. (Photo by Ralph Orlowski/Reuters) 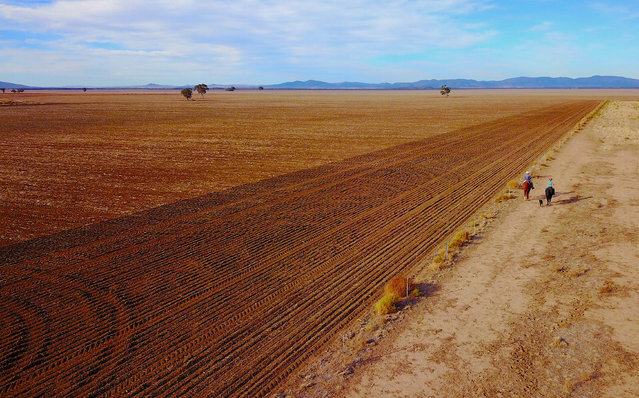 Farmer Scott Cooper and his daughter Charlie ride their horses next to a fence that adjoins a drought-effected paddock, which used to contain wheat crop, on their property named “Nundah”, located south of the central New South Wales town of Gunnedah in Australia, July 21, 2018. (Photo by David Gray/Reuters) 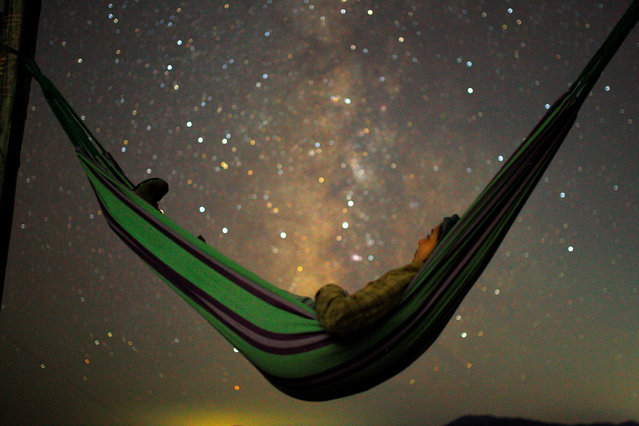 A girl lies in hammock as she looks at the milky way during the peak of Perseid meteor shower in Kozjak, Macedonia on August 13, 2018. (Photo by Ognen Teofilovski/Reuters) 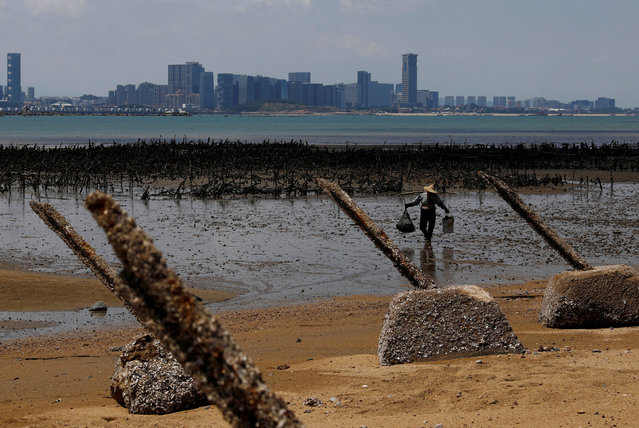 An oyster farmer walks in front of China's Xiamen, ahead of the 60th anniversary of Second Taiwan Straits Crisis against China, on Lieyu Island, Kinmen County, Taiwan August 20, 2018. (Photo by Tyrone Siu/Reuters) 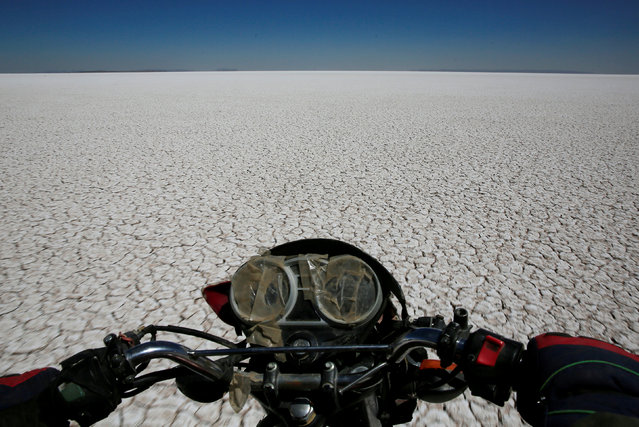 A view of dried lake Poopo affected by climate change, in the Oruro Department, Bolivia, September 1, 2017. (Photo by David Mercado/Reuters) 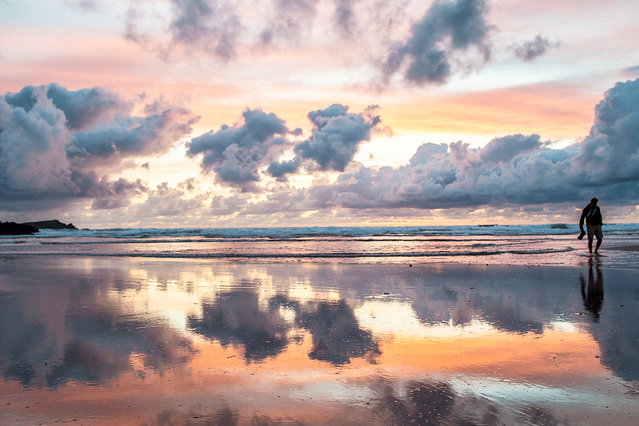 People watch the sun set at Porth beach on the first day of the annual Boardmasters festival that is taking place in Newquay on August 8, 2018 in Cornwall, England. Since 1981, the Boardmasters surfing competition has been held in Newquay and is now part of a larger five-day surf, skate and music festival becoming an integral part of the continually popular British surf scene, growing from humble beginnings, to one of the biggest events on the British surfing calendar. It now attracts professional surfers from across the globe to compete on the Cornish beach that is seen by many as the birthplace of modern British surfing. (Photo by Matt Cardy/Getty Images)
Edit Del
19 Sep 2018 00:03:00, post received 0 comments
Publication archive:
←   →
Popular tags:
All tags
Last searches: