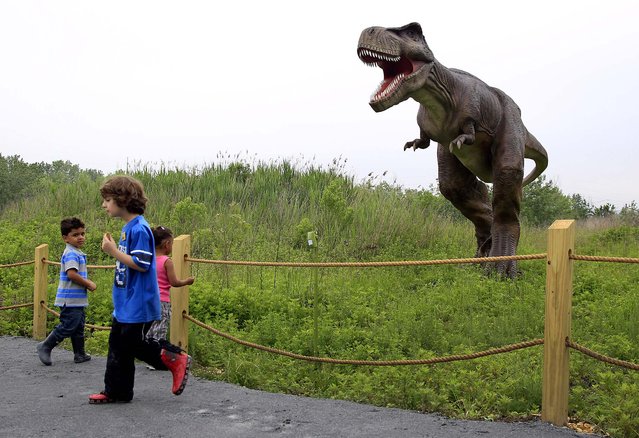 Children watch and react as a T-Rex moves and growls in an inter-active display at Field Station Dinosaurs in Secaucus, N.J on May 25, 2012. There will be 31 types of life-sized dinosaurs displayed at the Jurassic expedition that opens Saturday, May 26. (Photo by Mel Evans/Associated Press) 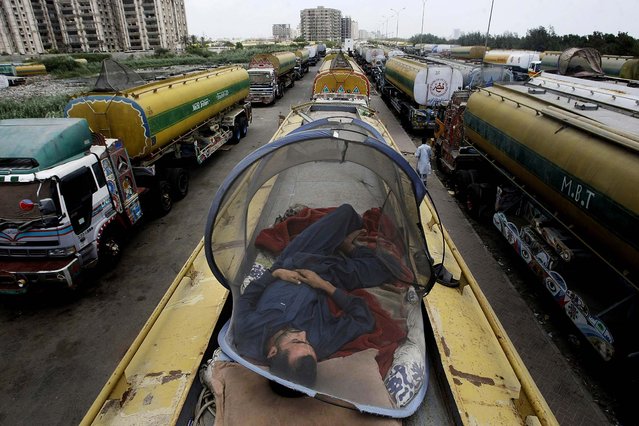 A man takes a nap on an oil tanker used to transport NATO fuel supplies to neighboring Afghanistan, in Karachi, Pakistan on May 17, 2012. (Photo by Fareed Khan/Associated Press) 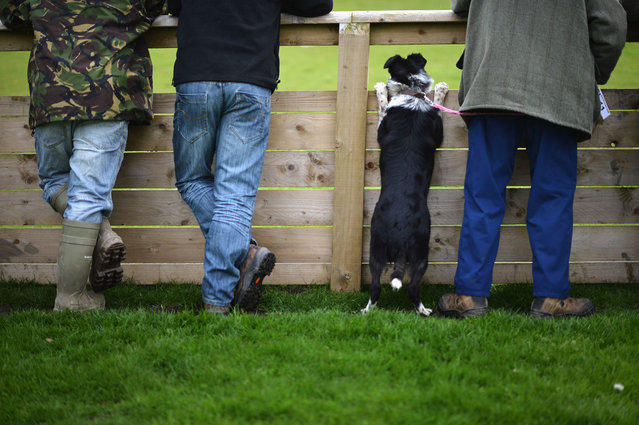 A sheepdog watches another dog in the auction ring as it waits its turn to be auctioned at Skipton Auction Mart on May 18, 2012 in Skipton, England. Craven Cattle Marts (Photo by CCM), in the Yorkshire Dales, are world reknowned for their sheepdog auctions with buyers bidding for some of the countries best bred border collies. In 2010 a world record price of 5145 GBP was each paid for sheepdogs Ron and Rex. (Photo by Christopher Furlong) 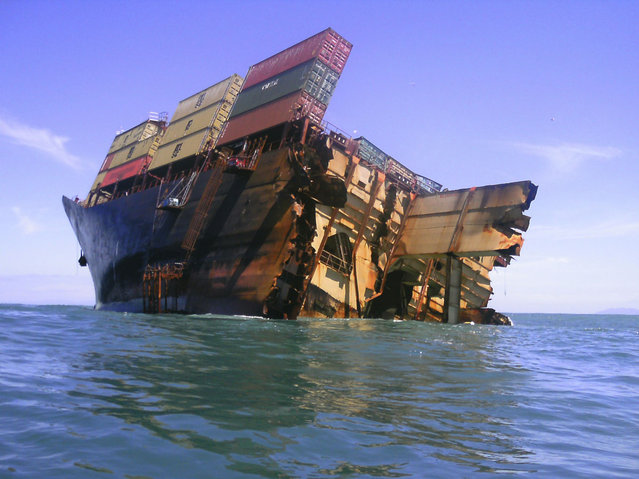 The bow section of the stricken container ship Rena remains above water after the stern broke off and sank about 14 nautical miles (Photo by 22 km) from Tauranga on the east coast of New Zealand’s North Island in this January 11, 2012 photo. The captain Mauro Balomaga and navigation officer Leonil Relon of the enormous cargo ship Rena, which smashed into a reef off a popular New Zealand holiday spot, were jailed on May 25, 2012 for causing the country’s worst environmental disaster in decades. The two men, both Filipino nationals, will spend the next seven months in prison. (Photo by Svitzer/Reuters) 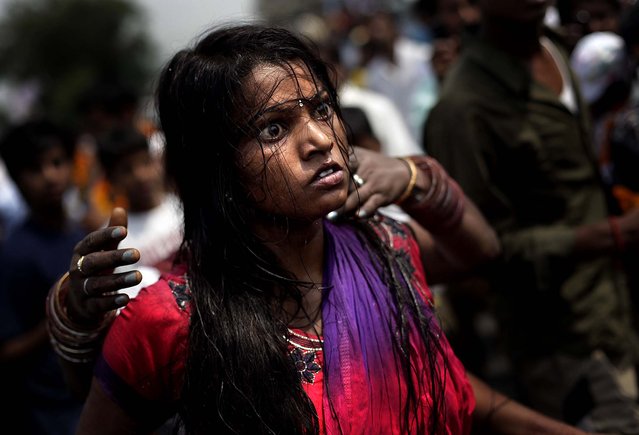 A devotee of Hindu goddess Maha Mariamman dances in trance during a religious procession in Amritsar, India on May 13, 2012. Devotees believe that the goddess brings good health and prosperity to those who worship her. (Photo by Altaf Qadri/Associated Press) 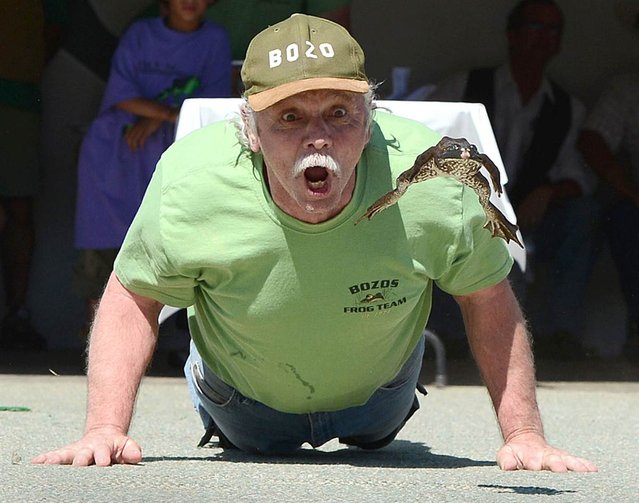 Brent Bloom urges on his frog, Jumping Bob, at the Jumping Frog Jubilee, May 20, in Calaveras County, Calif. (Photo by Chris Weeks/AP) 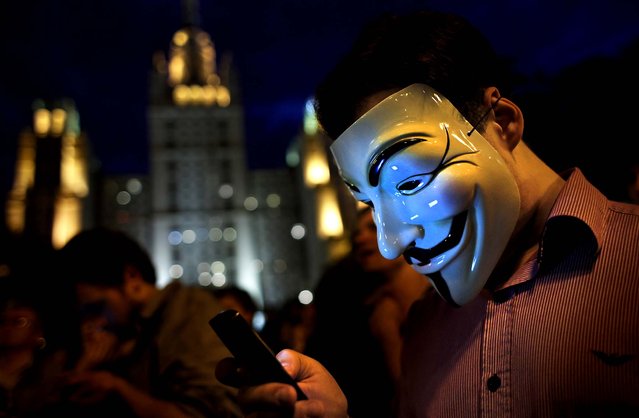 A masked protester tweets while listening to a speech at a new campsite for opponents of the government in Moscow on May 18, 2012. Seeking to maintain momentum, the opposition set up a camp in central Moscow that survived for a week before police dispersed it Wednesday. The new camp, erected at another square across the capital, has survived so far, but has faced police raids and detentions. (Photo by Alexander Zemlianichenko/Associated Press) 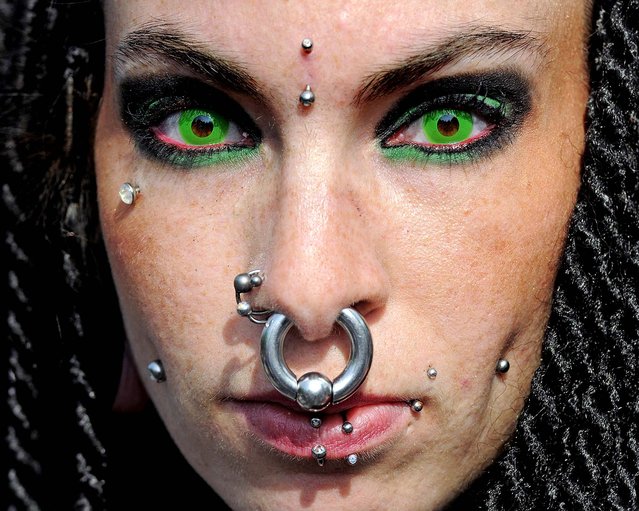 A participant attends the Wave-Gotik-Treffen (Photo by Wave Gothic Festival) in Leipzig on May 26, 2012. (Photo by Jens Meyer/Associated Press) 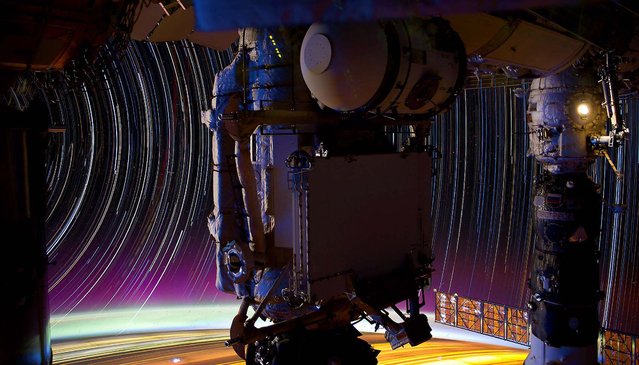 This is a composite of a series of images photographed from a mounted camera on the International Space Station on May 18, 2012. Expedition 31 Flight Engineer Don Pettit said of the photographic techniques used to achieve the images: “My star trail images are made by taking a time exposure of about 10 to 15 minutes. However, with modern digital cameras, 30 seconds is about the longest exposure possible, due to electronic detector noise effectively snowing out the image. To achieve the longer exposures I do what many amateur astronomers do. I take multiple 30-second exposures, then “stack” them using imaging software, thus producing the longer exposure”. A total of 47 images photographed by the astronaut-monitored stationary camera were combined to create this composite. (Photo by NASA/MCT) 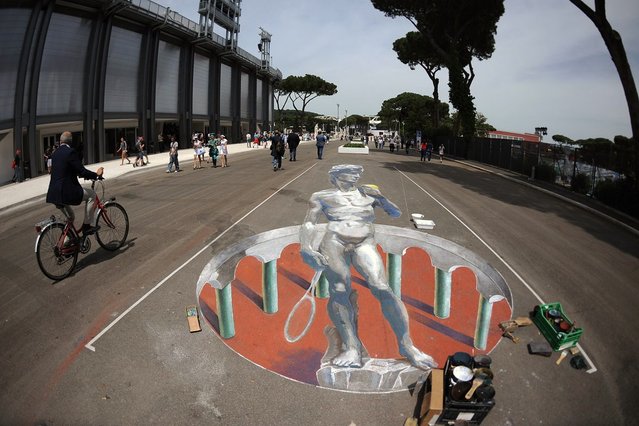 People pass by a painting showing a Roman statue holding a tennis racket on the day of the quarter-finals match of the ATP and WTA Rome tournament on May 18, 2012. (Photo by Gabriel Bouys/AFP) 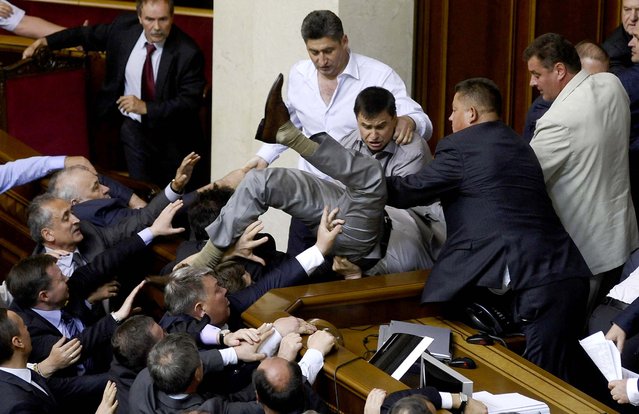 Lawmakers from pro-presidential and oppositional factions in the parliament session hall in Kiev, Ukraine on May 24, 2012. The violent scuffle erupted over a bill that would allow the use of the Russian language in courts, hospitals and other institutions in the Russian-speaking regions of the country. (Photo by Maks Levin/Associated Press)

Wild horses are driven into an arena to pick out young stallions in Duelmen, Germany on May 26, 2012. It is believed that this is the last herd of wild horses on the European continent; more than 300 of the indigenous horses stay free and wild without any care under the protection of the Duke of Croy. Once a year the new born stallions are caught and sold, but all mares stay with the herd and guarantee the survive of the endangered species. (Photo by Martin Meissner/Associated Press) 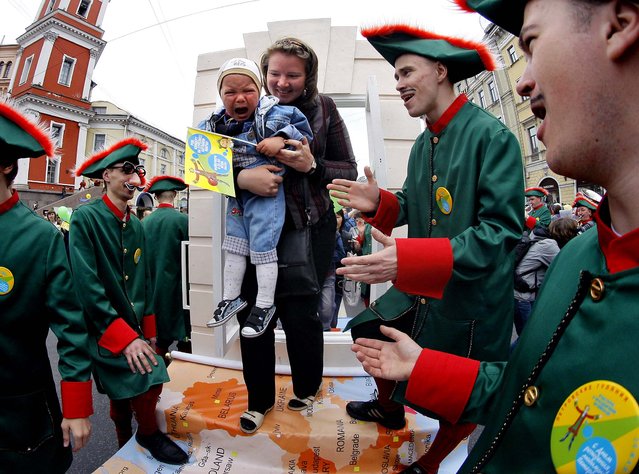 A woman and her child walk through a symbolic “Window to Europe” during celebrations marking the 309th anniversary of the city of St.Petersburg, Russia on May 26, 2012. To “open a window to Europe” is a popular expression that describes the foundation of St. Petersburg by the Russian tsar Peter the Great. (Photo by Dmitry Lovetsky/Associated Press) 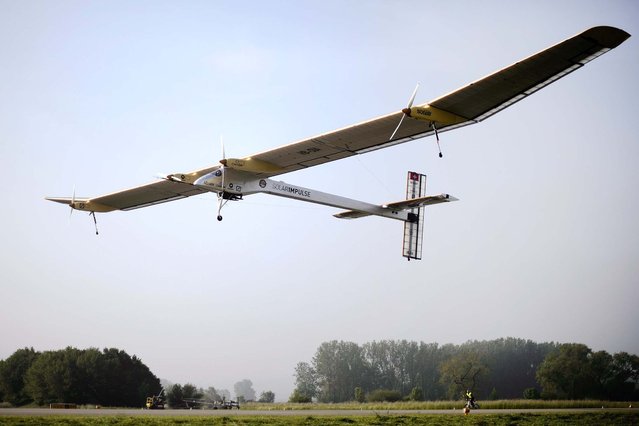 Company CEO Andre Borschberg pilots the experimental aircraft “Solar Impulse” for its first intercontinental flight to Morocco from an airbase in Payerne, Switzerland on May 25, 2012. (Photo by Laurent Gillieron/ Keystone) 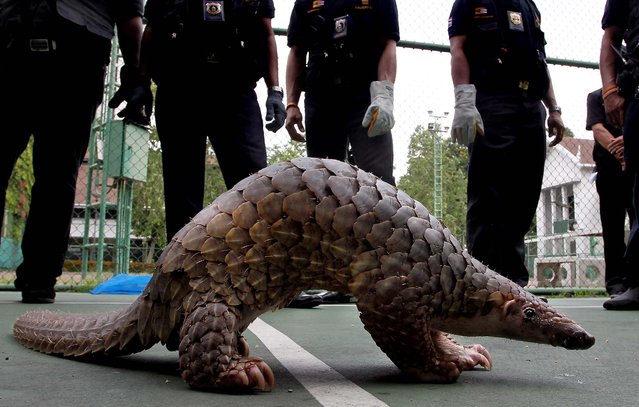 Thai customs officials look at a pangolin they rescued, during a news conference in Bangkok on May 26, 2012. Officals rescued 138 endangered pangolins worth about $46,000 that they say were to be sold and eaten outside the country. (Photo by Apichart Weerawong/Associated Press) 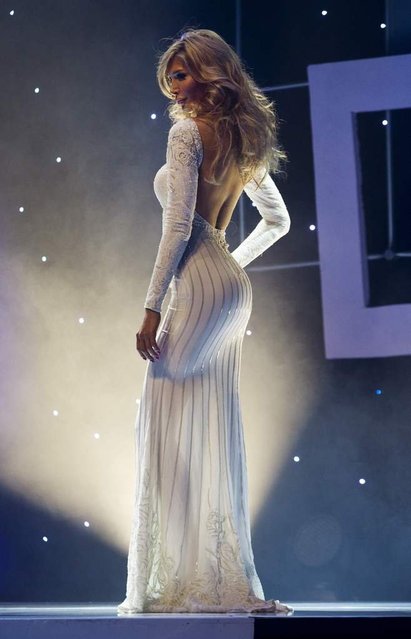 Model Jenna Talackova, the first transgender Miss Universe contestant, is seen on stage during the preliminary round of the Miss Universe Canada beauty pageant contest in Toronto on May 18, 2012. The Vancouver beauty, who was born male but underwent s*x-change surgery four years ago, is among 62 contenders vying for the crown. (Photo by Aaron Vincent Elkaim/The Canadian Press) 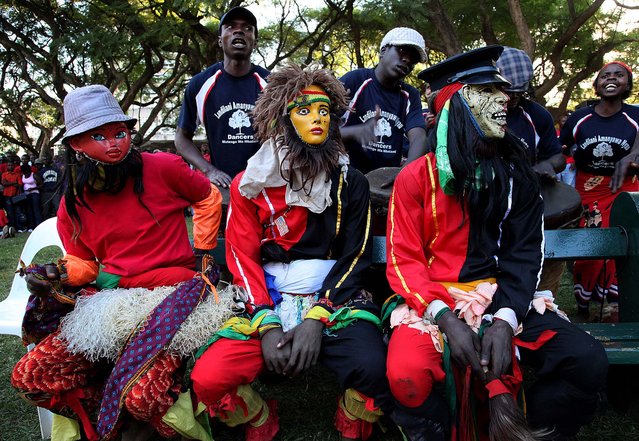 Members of the Landilani Amanyawa Nyau dance group wait to perform during Africa Day commemorations held in Harare on May 25, 2012. The group joined several performers at the occasion which saw Zimbabwe joining the rest of the continent in celebrating Africa Day. (Photo by Tsvangirayi Mukwazhi/Associated Press) 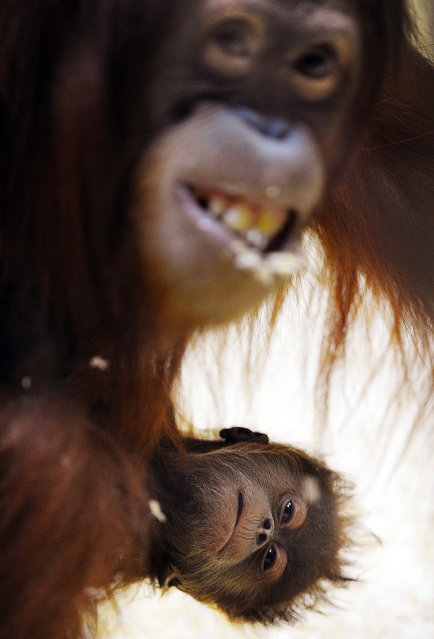 A Sumatran orangutan holds her 5 week-old baby Malou at the Zurich Zoo in Switzerland on May 15, 2012. (Photo by Steffen Schmidt/Associated Press) 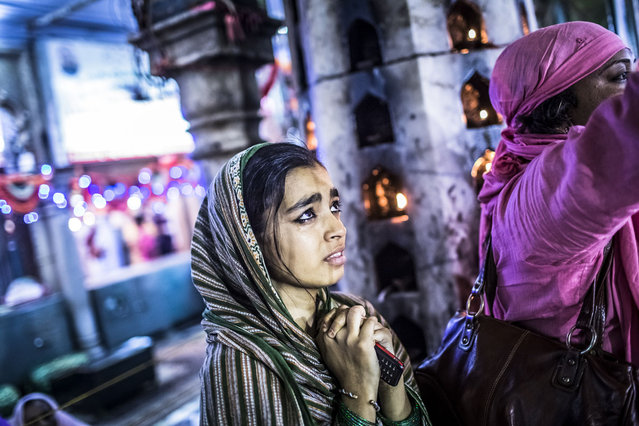 A young Sufi Muslims devoteecries as she clasps her hands in prayer at the “dargah” or shrine of Sufi saint Muhammad Moin-ud-din Chisti on May 22, 2012 in Ajmer, India. Thousands of Sufi Muslim pilgrims from across India converge on the North Indian town of Ajmer to mark the “Urs” (Photo by death anniversary) Festival of Muhammad Moin-ud-din Chisti, a 12th century Sufi saint from Persia who lies buried in Ajmer. Hundreds of thousands of pilgrims and fakirs from all South Asia come to celebrate and pay their respects to the saint. (Photo by Daniel Berehulak) 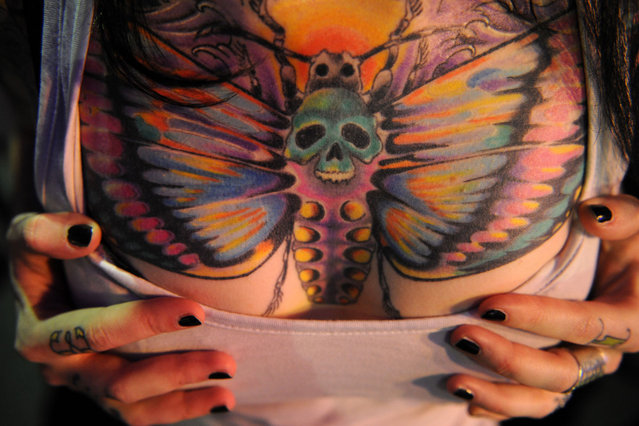 A woman shows off her tattoo during during an International Congress of Tattoo Artists in Moscow, on May 18, 2012. (Photo by Kirill Kudryavtsev/AFP) 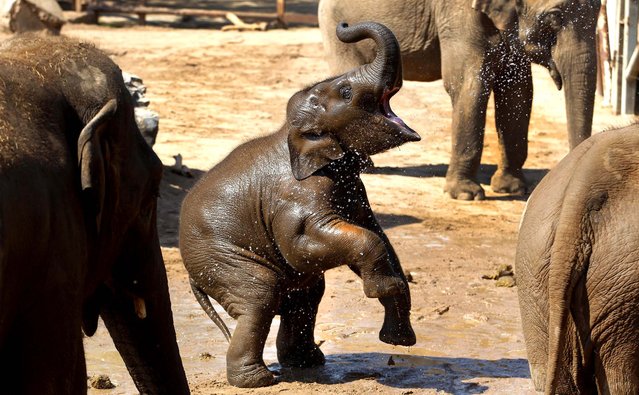 Nayan, an Asian elephant, stands on his hind legs as he is squirted with water by his keepers to keep cool at Chester Zoo, England on May 22, 2012. (Photo by Dave Thompson/PA) 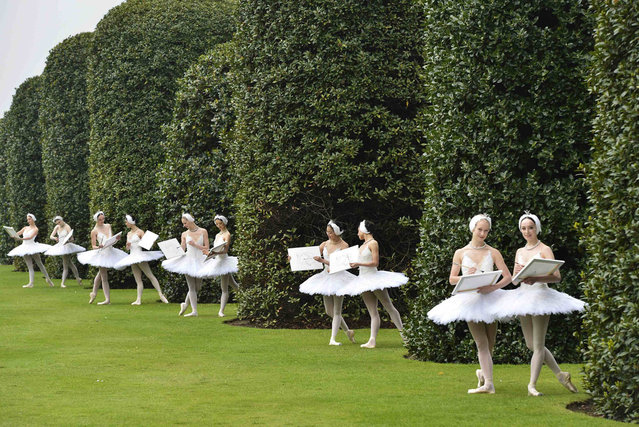 Members of the English National Ballet pose outside The Orangery restaurant at Kensington Palace in London May 22, 2012, as part of a publicity event for a summer charity fundraiser with Swan Lake as the theme. (Photo by Toby Melville/Reuters) 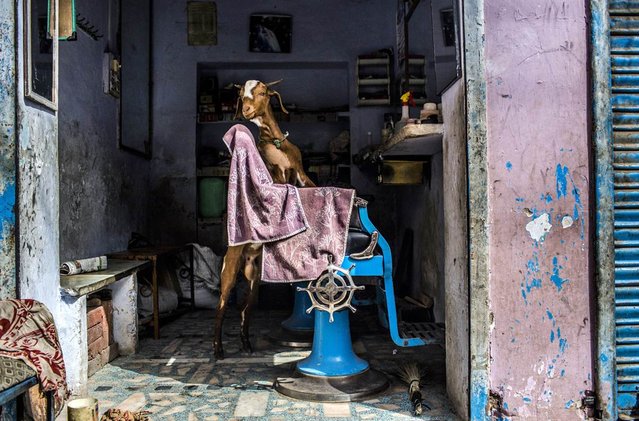 A goat stands inside a barber shop on a road leading to the shrine of Sufi saint Muhammad Moin-ud-din Chisti on May 22 in Ajmer, India. Thousands of Sufi Muslim pilgrims from across India converge on the north Indian town of Ajmer to mark the Urs festival of 12th-century Sufi saint from Persia who is buried in Ajmer. (Photo by Daniel Berehulak) 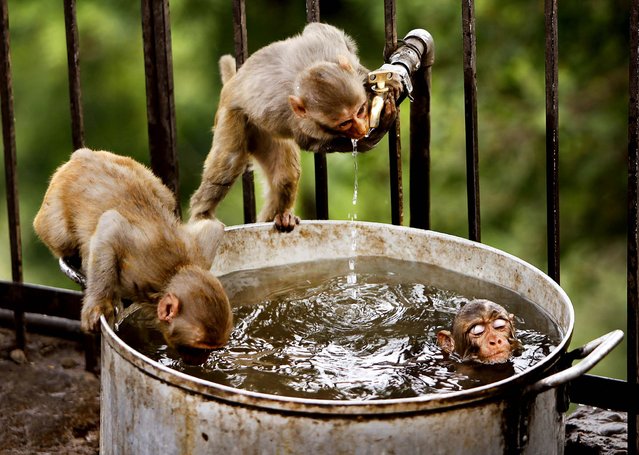