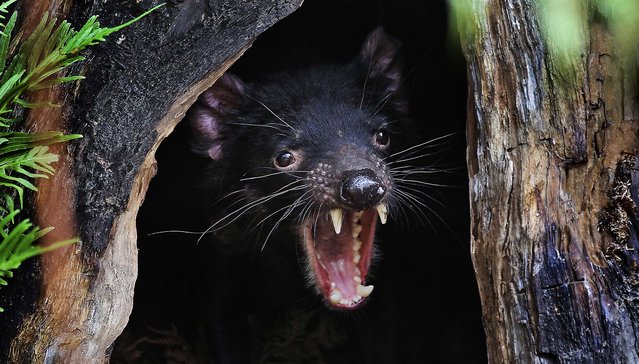 Big John the Tasmanian devil growls from the confines of his new tree house as he makes his first appearance at the Wild Life Sydney Zoo after arriving in his new home, December 21, 2012. The Tasmanian devil is the largest carnivorous marsupial in the world. (Photo by
Rob Griffith/Associated Press) 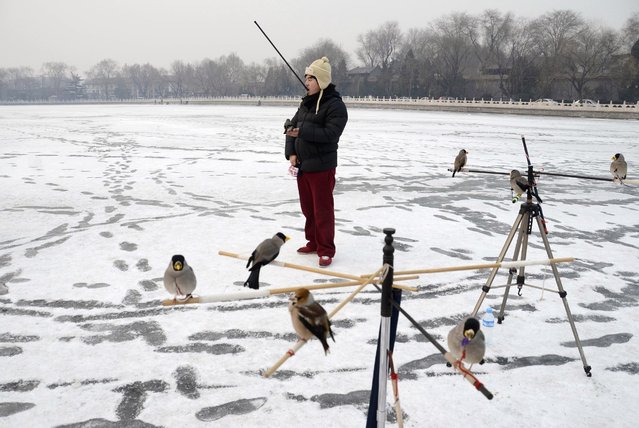 A Chinese man plays with his pet bird on a frozen lake in Beijing on December 19, 2012. (Photo by Wang Zhao/AFP Photo)

A Great White Pelican catches a fish in his compound at the Zoo in Dresden, Germany, January 2, 2013. (Photo by Matthias Rietschel/Dapd) 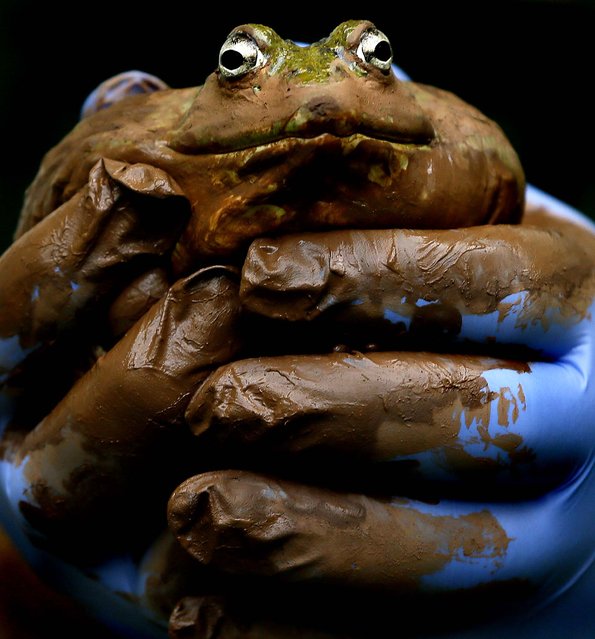 More than 17,500 animals, including this bullfrog and birds, fish, mammals, reptiles and amphibians, are counted in the annual stock take at the London Zoo January 3, 2013. (Photo by Kirsty Wigglesworth/Associated Press) 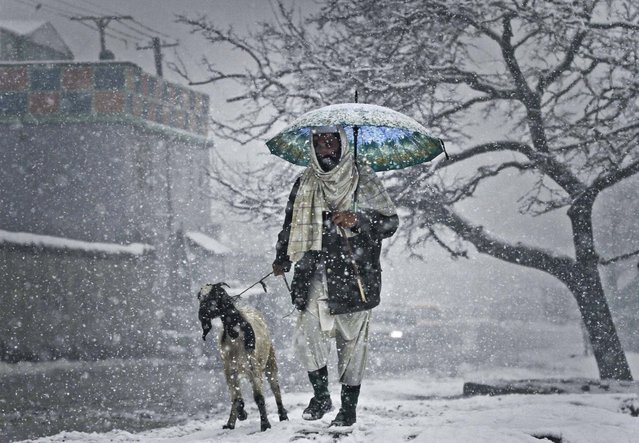 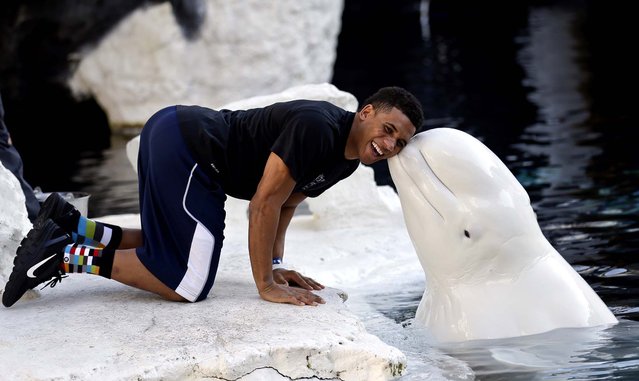 BYU defensive back Preston Hadley receives a kiss from a beluga whale during the team's Poinsettia Bowl visit to Sea World in San Diego, December 17, 2012. (Photo by Lenny Ignelzi/Associated Press) 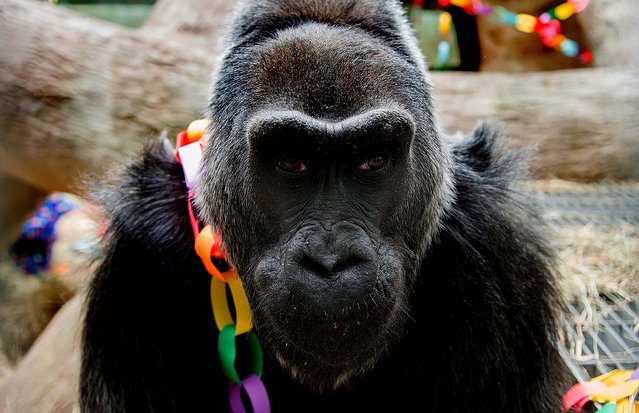 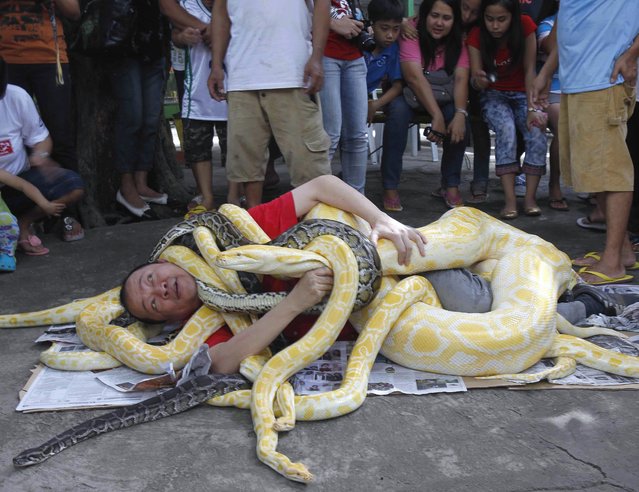 A man is seen wrapped with pythons, some which include the Albino Burmese Python, as part of a show celebrating the coming Year of the Snake in the Chinese calendar, while spectators look on, in Malabon city, north of Manila, Philippines, December 28, 2012. (Photo by Romeo Ranoco/Reuters) 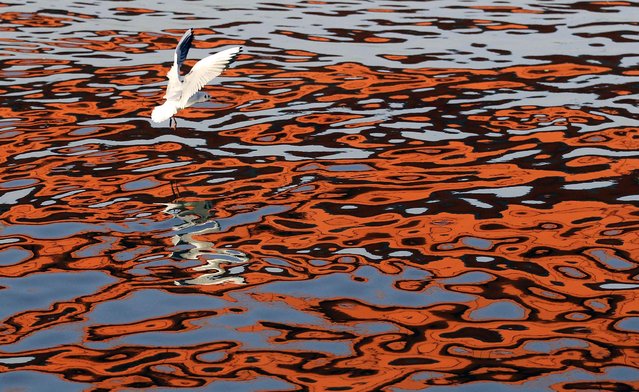 A river gull flies over the reflection of a bridge on the Sava River in Belgrade, Serbia, December 24, 2012. (Photo by Darko Vojinovic/Associated Press) 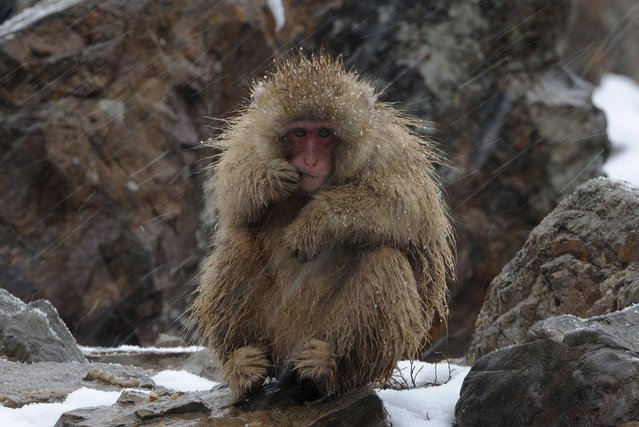 A baby Japanese Macaque, or snow monkey, eats during a snowfall at a wildlife Zoo in Hefei, Anhui province, China, December 26, 2012. A fresh cold snap will hit most parts of China in the coming three days, according to the National Meteorological Center's forecast on Wednesday, Xinhua News Agency reported. (Photo by Reuters/Stringer) 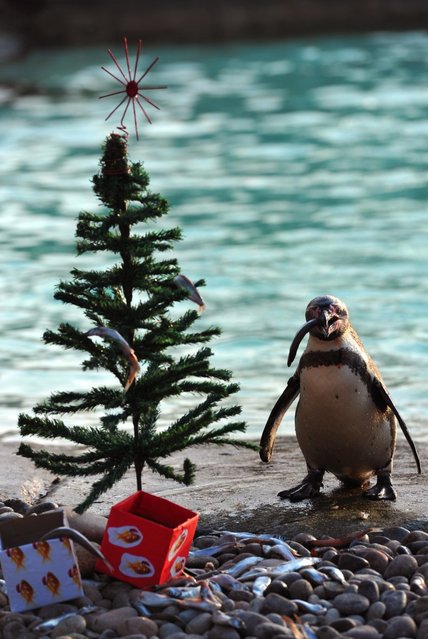 A penguin eats a fish next to a Christmas tree at the London Zoo in England on December 12, 2012. (Photo by Carl Court/AFP Photo) 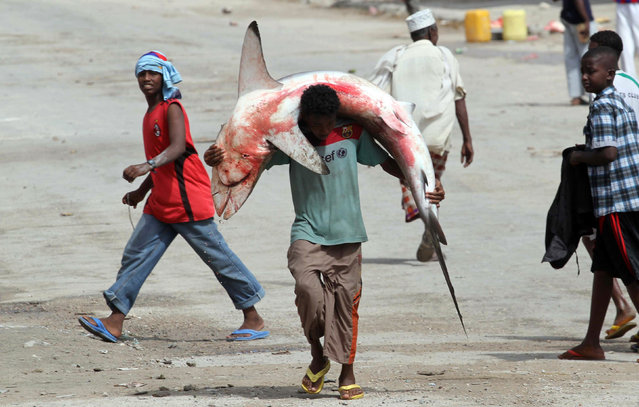 A fisherman carries a swordfish on his head and shoulders from the Indian Ocean waters to the market in Somalia's capital Mogadishu December 18, 2012. (Photo by Ismail Taxta/Reuters) 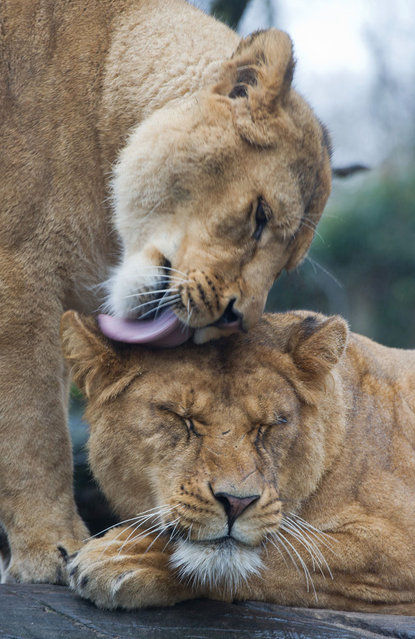 Two lions are pictured in their enclosure at the Zoo in Stralsund, Germany, on January 4, 2013. With more than 100,000 visitors annually, the municipal Zoo is one of the main tourist attractions of Stralsund. (Photo by Stefan Sauer/AFP Photo) 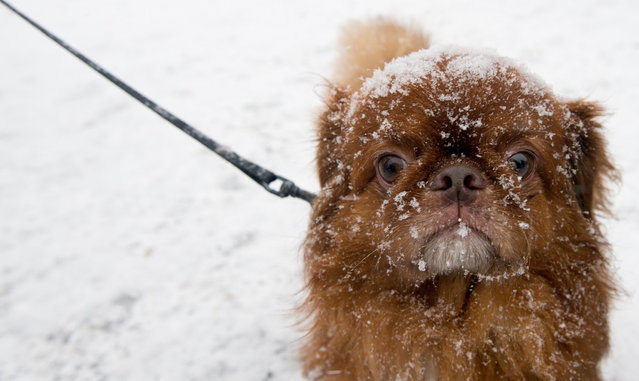 A domestic cat named Scooter watches a light closely as he relaxes in a wrapped box under a Christmas tree. (Photo by Robin Loznak/Zuma Press) 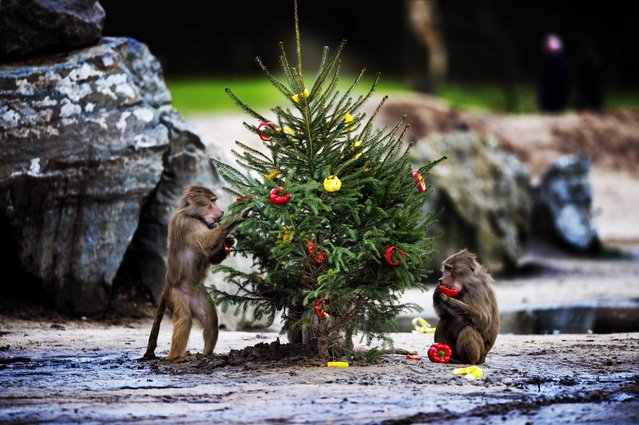 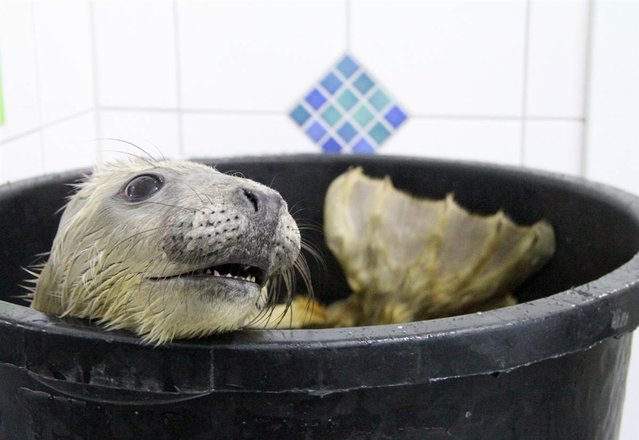 A gray baby seal, “Julian”, sits inside a weighing bucket at the seal station in Friedrichskoog, Germany, December 22, 2012. (Photo by Wolfgang Runge/Zuma Press) 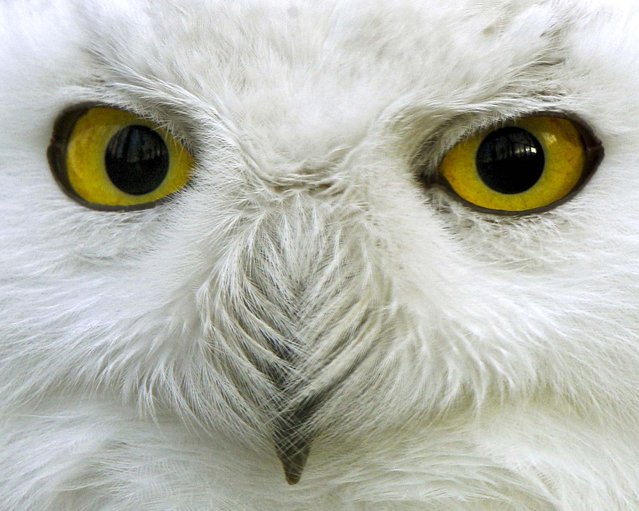 A young snowy owl at the zoo in Krefeld, Germany, January 2, 2013. The species is native to northern Eurasia and North America. (Photo by Roland Weihrauch/Dpa) 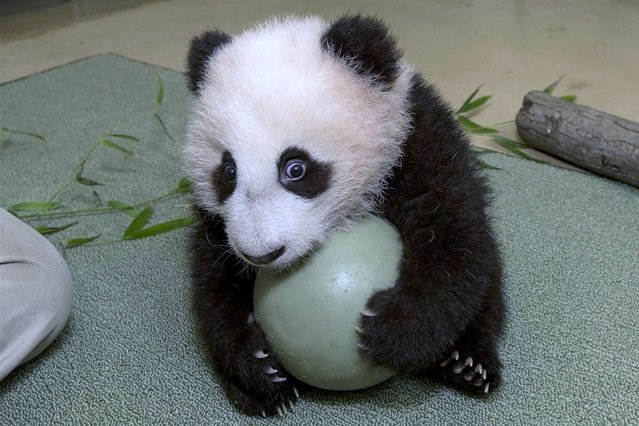 The San Diego Zoo’s panda cub, Xiao Liwu, holds onto a plastic ball tightly. Panda keepers gave the cub the new toy to test his coordination and encourage him to play with new objects. (Photo by Ken Bohn/San Diego Zoo) 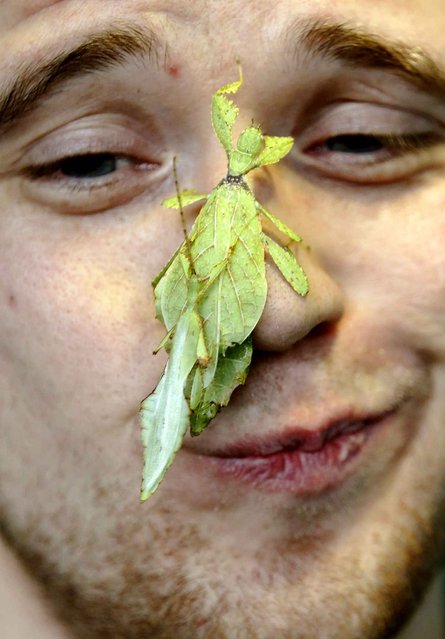