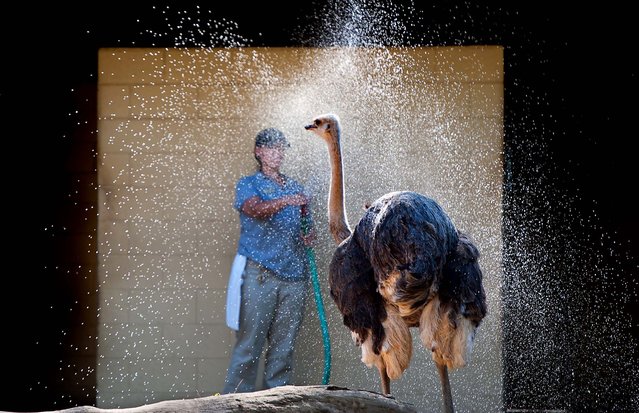 Zoo keeper Mandy Zachgo cools off Marzipan, a female ostrich, with a hose shower, a daily ritual on hot days at the zoom in Sacramento, October 2, 2012. (Photo by Randy Pench/The Sacramento Bee) 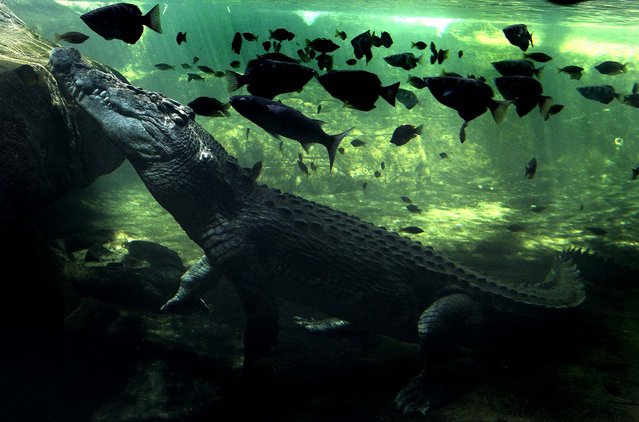 A 700kg crocodile called Rex calmly waits beneath the water to be fed after coming out of a three-month hibernation at the WILD LIFE zoo in Sydney, Australia, on October 3, 2012. (Photo by Rob Griffith/Associated Press) 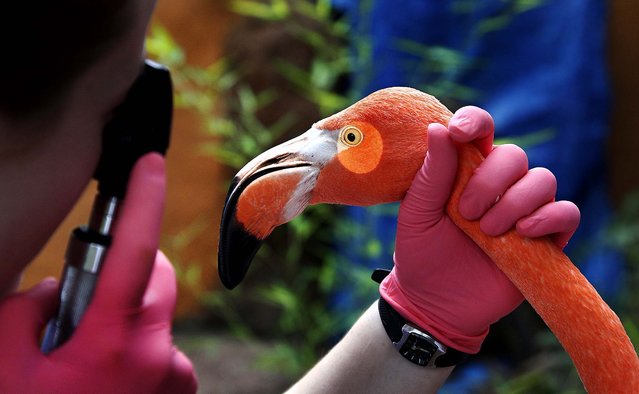 During an annual exam, a veterinarian uses a light to check on the eye of an American Flamingo at the Oklahoma City Zoo, on October 4, 2012. (Photo by Sue Ogrocki/Associated Press) 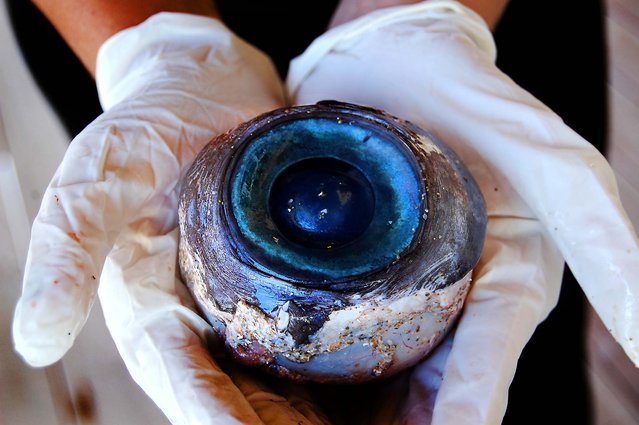 A giant eyeball from a mysterious sea creature washed ashore and was found by a man walking the beach in Pompano Beach on October 11, 2012. No one knows what species the huge blue eyeball came from. The eyeball will be sent to the Florida Fish and Wildlife Research Institute in St. Petersburg to be examined. (Photo by Carli Segelson/Florida Fish and Wildlife Conservation Commission) 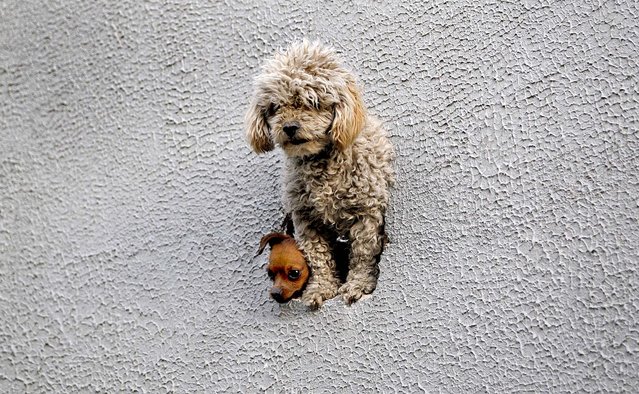 Two dogs look out through a hole in the wall of a house in Bogota, Colombia, on October 8, 2012. (Photo by Fernando Vergara/Associated Press) 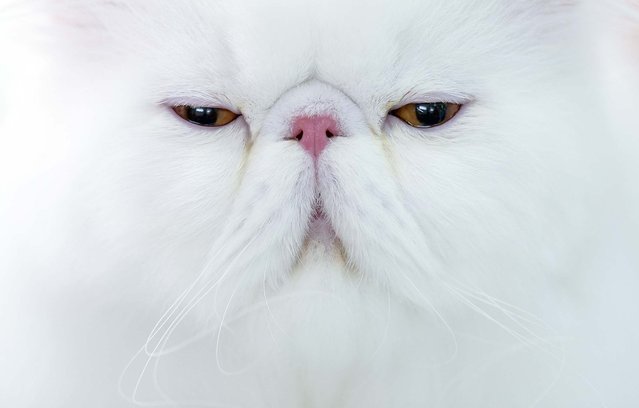 A Persian cat waits to be examined by a referee during an international feline beauty competition in Bucharest, Romania, on September 29, 2012. (Photo by Vadim Ghirda/Associated Press) 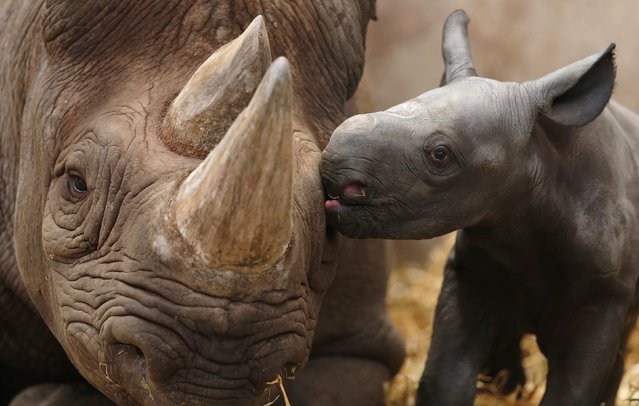 Ema Elsa, a nine-year-old Black Rhino, is nuzzled by her newborn calf in their enclosure at Chester Zoo in Chester, northern England October 5, 2012. The female calf which is less than 48 hours old will join an international breeding programme for the critically endangered species. (Photo by Phil Noble/Reuters) 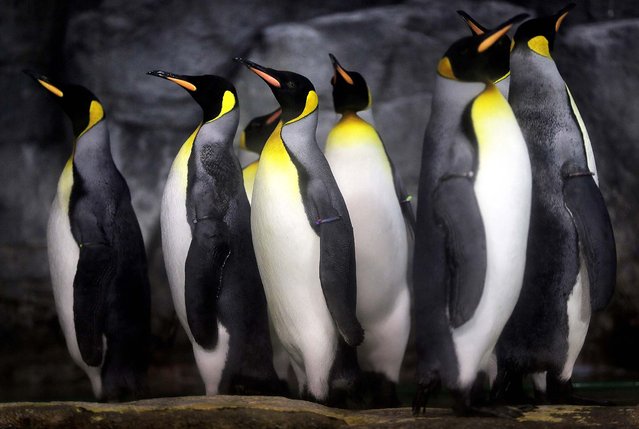 King Penguins stand in an enclosure at the Hakkeijima Sea Paradise aquarium-amusement park complex in Yokohama, near Tokyo, on September 30, 2012. (Photo by Itsuo Inouye/Associated Press) 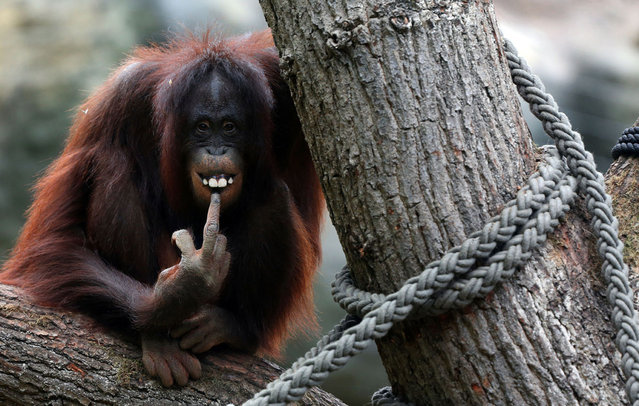 A female orangutan sits on a tre in her enclosure a the Zoo in the northern German city of Rostock on October 5, 2012. (Photo by Jens Buttner/AFP Photo) 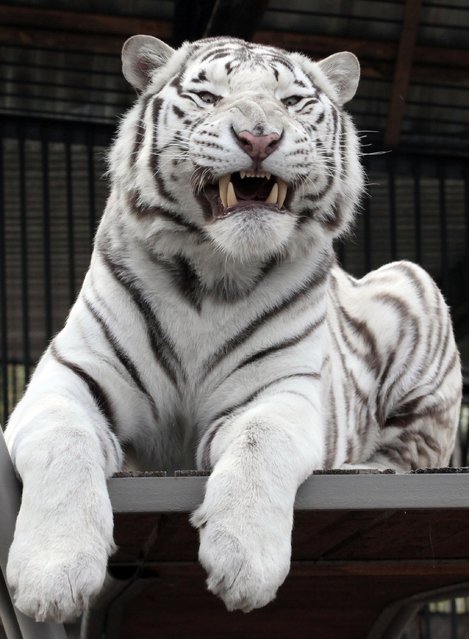 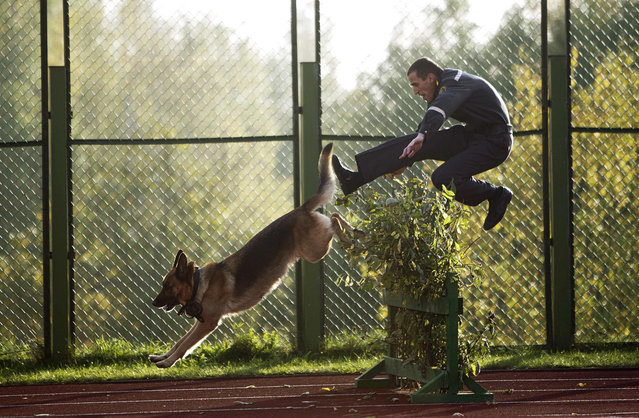 A Belarussian interior ministry officer jumps over an obstacle with his guard dog as they take part in a show of skills competition ahead of the ministry's 60th anniversary, at their base near the village of Gorany, some 32 km (20 miles) west of Minsk, October 4, 2012. (Photo by Vasily Fedosenko/Reuters) 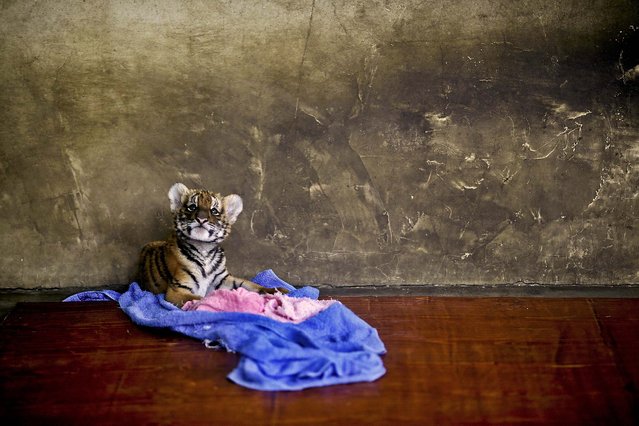 A tiger cub rests at a nursery room at the Shanghai Zoo in Shanghai, China, on October 4, 2012. (Photo by Eugene Hoshiko/Associated Press) 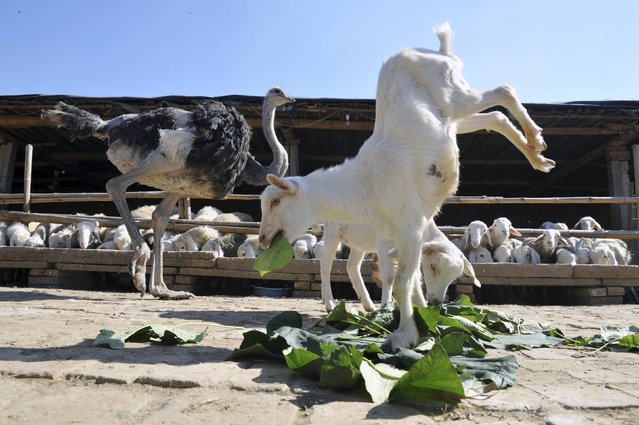 A goat stands on its two front legs as it eats leaves beside an ostrich in Shijiazhuang, Hebei province of China October 11, 2012. The 8-month-old goat, which was born with two deformed hind legs, learnt to walk with only its front legs three days after birth, local media reported. (Photo by China Daily/Reuters) 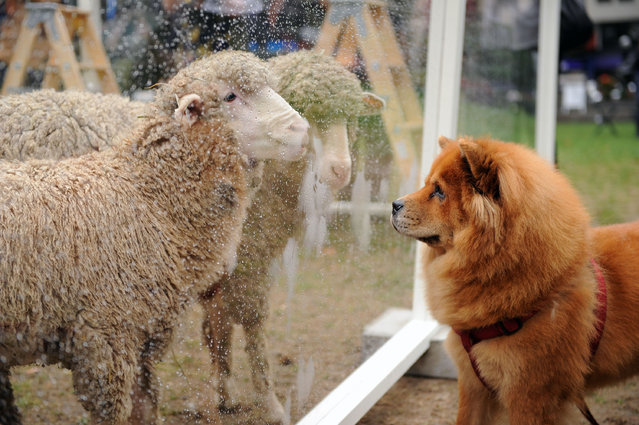 A curious dog stares at a flock of sheep at the US launch of HRH The Prince of Wales' Campaign For Wool at Bryant Park on September 27, 2012 in New York City. The Campaign, in the US for the first time, is to educate consumers about the natural benefits of wool and to promote wool-rich products to a national audience. (Photo by Bryan Bedder/Campaign For Wool) 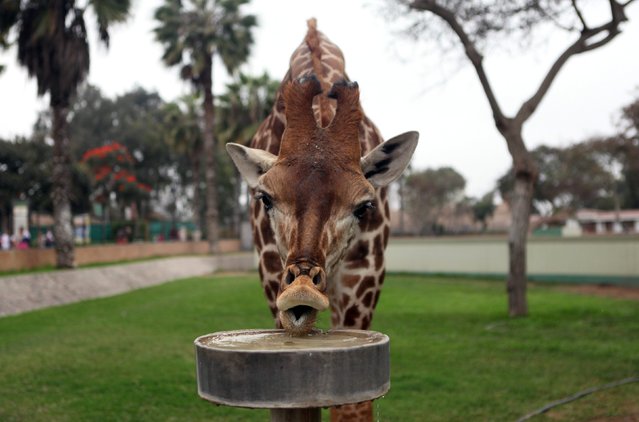 A giraffe in seen at the Zoo “Parque de Las Leyendas” in Lima September 27, 2012. (Photo by Lucero Del Castillo/Reuters) 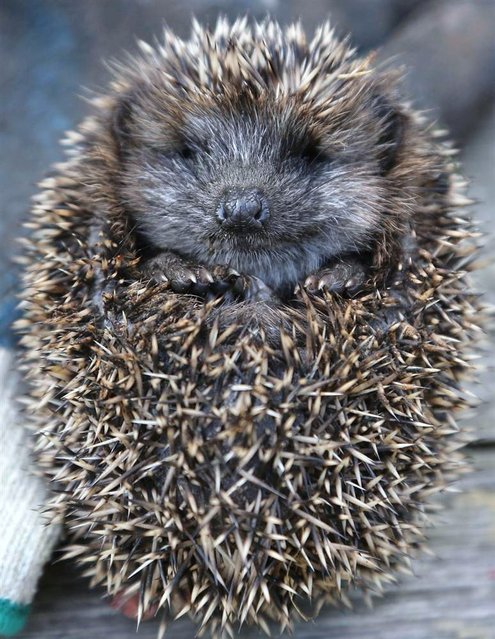 A young hedgehog curls up into a ball in Berlin on October 1, 2012. If attacked, hedgehogs curl into prickly and unappetizing balls that deter most predators. (Photo by Wolfgang Kumm/AFP) 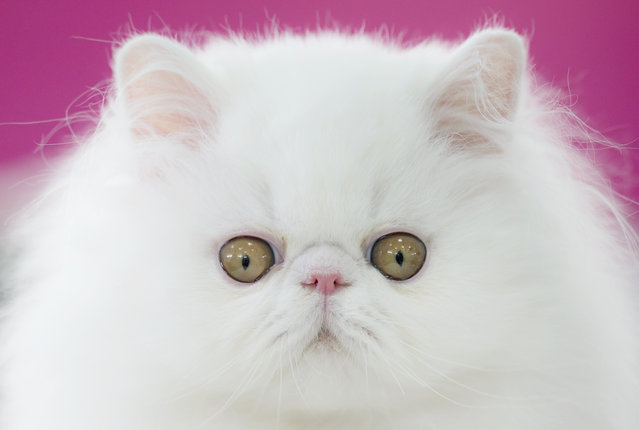 A Persian kitten, shortlisted for the Best in Show award, is seen while being examined by a referee during an international feline beauty competition in Bucharest, Romania, Saturday, September 29, 2012. The contest, significantly less enjoyed by the cats than by the many visitors, was entered by more than 200 felines.(Photo by Vadim Ghirda/AP Photo) 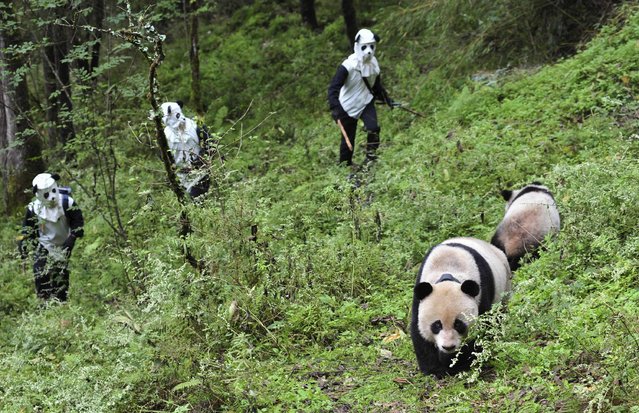 Researchers try to approach giant panda Taotao and its mother Caocao in Wolong National Nature Reserve in China October 7, 2012. Taotao and its mother Caocao were transferred down from a 2,100-meter high mountain to Hetaoping Research and Conservation Center for a health examination and to be prepared for reintroduction to the wild. Researchers wore panda costumes to ensure that the cub's environment was devoid of human influence, according to local media. (Photo by China Daily/Reuters) 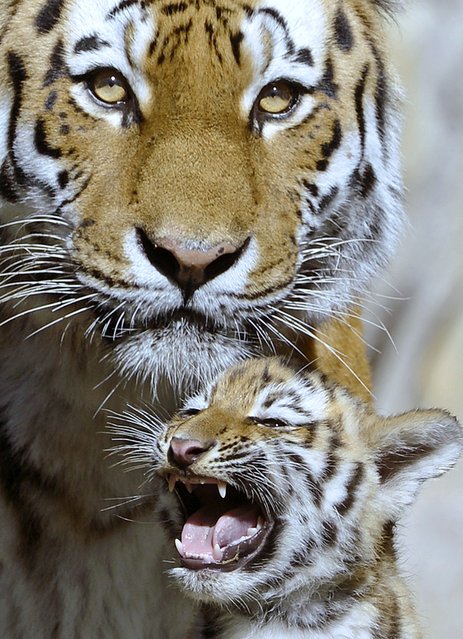 One of the Amur tiger twin cubs (Panthera tigris altaica) yawns near mother “Bella” during their first walks in the enclosure in the Leipzig Zoo in Leipzig, central Germany Sunday, September 30, 2012. Two Amur tiger babies were born on July 20, 2012. (Photo by Jens Meyer/AP Photo) 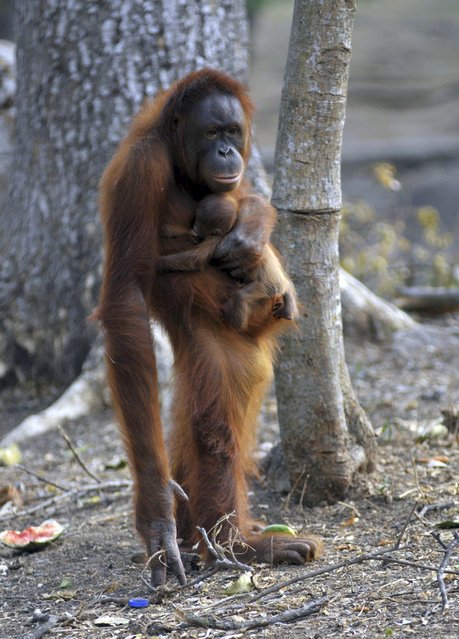 In this photo taken on September 27, 2012, Tori, a female orangutan carries her baby at Satwa Taru Jurug Zoo in Solo, Central Java, Indonesia. Tori, known as one of the female orangutans which like to smoke cigaret that was given by Zoo visitors, gave birth to the baby on September 26, 2012. (Photo by AP Photo/Stringer) 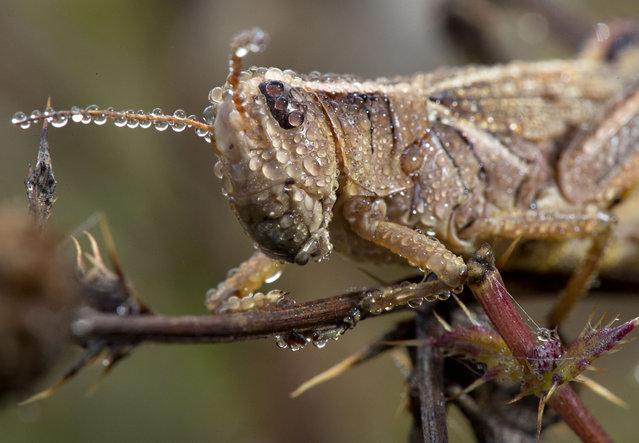 A dewdrop covered grasshopper clings to a thistle in a pasture in the early morning on a farm near Roseburg, Ore., on Sunday, September 30, 2012. (Photo by Robin Loznak) 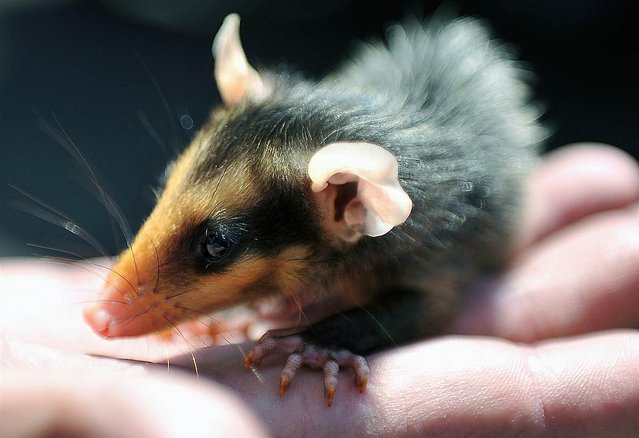 A Brazilian “gamba” is pictured during the Saint Francis of Assisi feast at the Zoo in Rio de Janeiro on October 4. 2012. (Photo by Vanderlei Almeida/AFP) 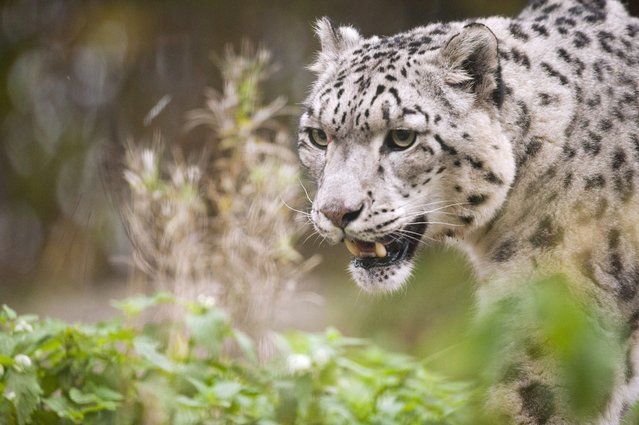 A snow leopard stalks during the World Animal Day on October 4, 2012 at Korkeasaari Zoo in Helsinki, Finland. (Photo by Jarno Mela/AFP) 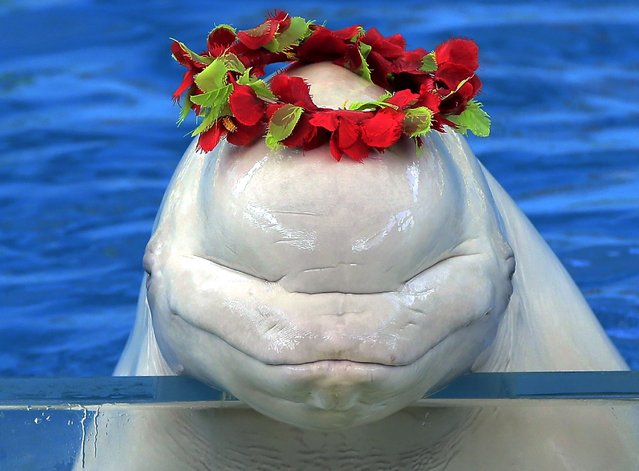 A white whale wears a wreath at the Hakkeijima Sea Paradise aquarium-amusement park complex in Yokohama, Japan, on October 3, 2012. (Photo by Associated Press) 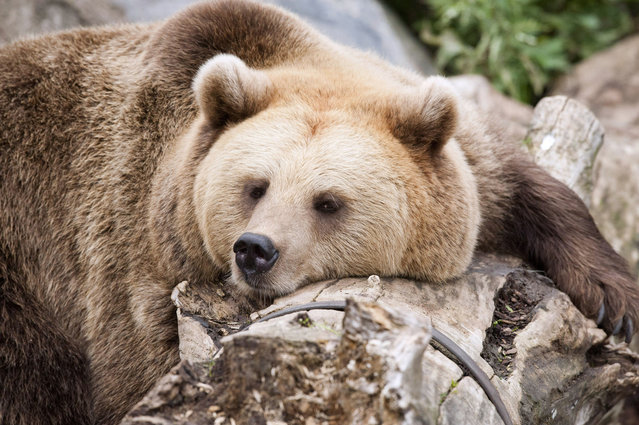