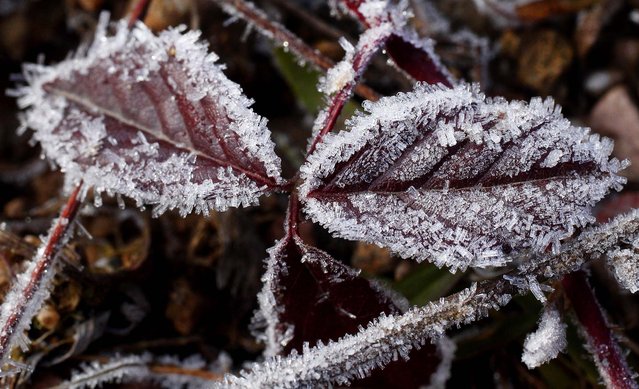 After a cold night, frost covers plants in a field in Forestburgh, N.Y., December 12, 2012. (Photo by Tom Bushey/Times Herald-Record) 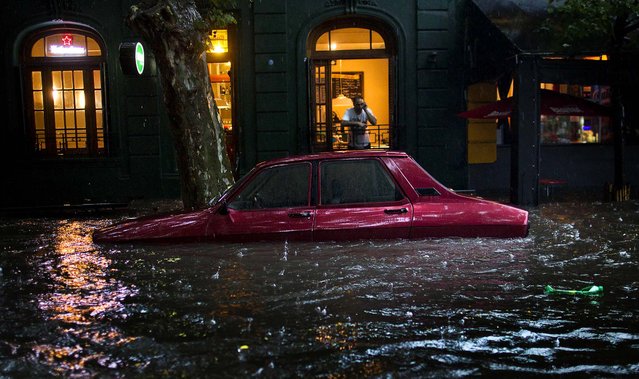 A car is submerged in floodwater in front of a home in Buenos Aires, Argentina, December 6, 2012. (Photo by Natacha Pisarenko/Associated Press) 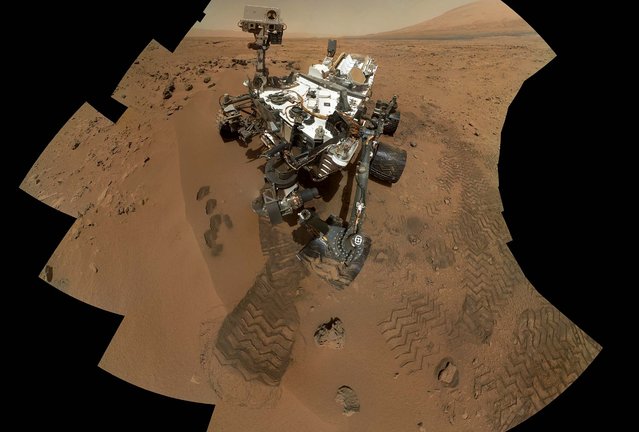 This image shows the work site of the NASA rover Curiosity on Mars, December 3, 2012. Results are in from the first test of Martian soil by the rover Curiosity: So far, there is no definitive evidence that the red planet has the chemical ingredients to support life. Scientists said that a scoop of sandy soil analyzed by the rover's chemistry lab contained water and a mix of chemicals, but not the complex carbon-based compounds considered necessary for microbial life. (Photo by NASA) 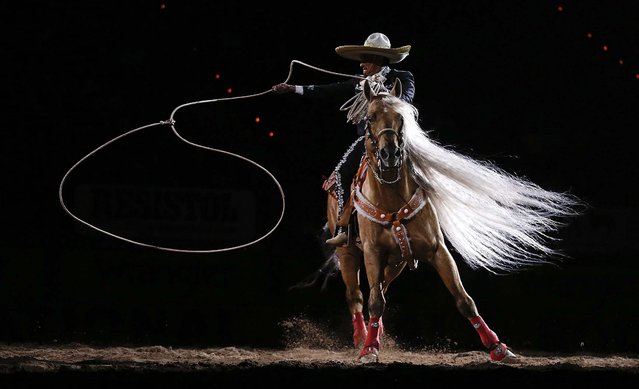 A rodeo performer does rope tricks at the end of the 10th go-round of the National Finals Rodeo in Las Vegas, December 15, 2012. (Photo by Julie Jacobson/Associated Press) 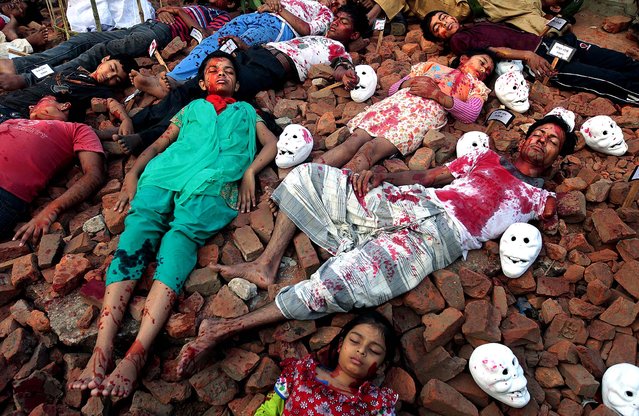 Children of Khelaghor organizations stage a mock scene of the killings of intellectuals to observe Martyrs' Day, in Dhaka, Bangladesh, December 14, 2012. Martyrs' Day comemorates the intellectuals who were killed on this day during the country's independence war against Pakistan in 1971. (Photo by A.M.Ahad/Associated Press) 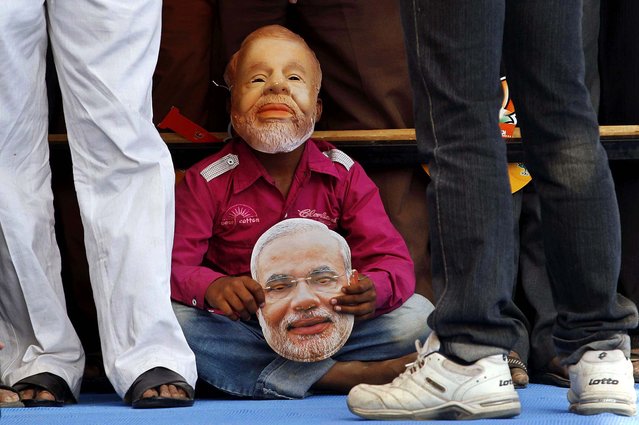 A young supporter wearing a mask of Gujarat Chief Minister Narendra Modi listens to a speech during an election campaign rally for state assembly elections at Prantij in Ahmadabad, India, December 15, 2012. The second phase of polling for the Gujarat state Assembly elections is scheduled to be held on Monday. (Photo by Ajit Solanki/Associated Press) 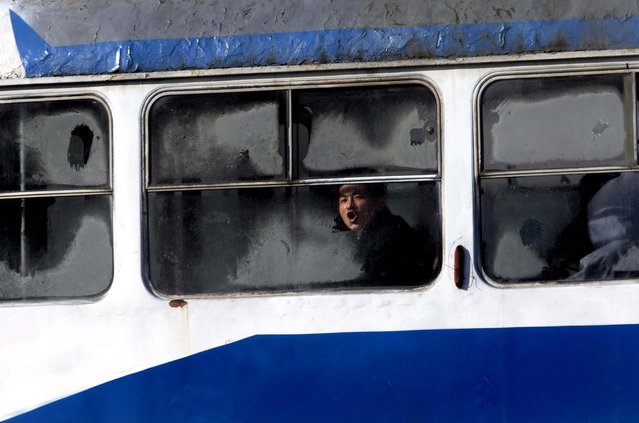 A man blows onto the frosted window of a tram in Pyongyang, North Korea, December 19, 2012. (Photo by Ng Han Guan/Associated Press) 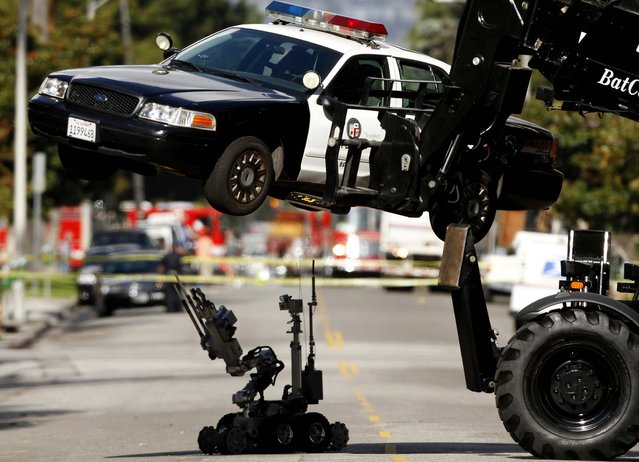 Los Angeles Police Department Bomb Squad members take a closer look at the underside of an LAPD patrol car after they received a call that a bomb had been planted in the unit on Harvard Boulevard, December 18, 2012.. After lifting the car into the air by one robotic device called a Bat Cat, another robotic device inspected the vehicle. (Photo by Mark Boster/Los Angeles Times) 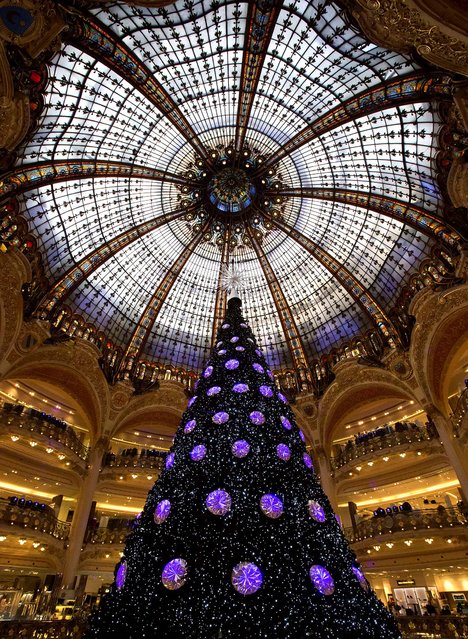 A Christmas tree is seen in the main hall of the Galeries Lafayette department store in Paris, December 18, 2012. (Photo by Michel Euler/Associated Press) 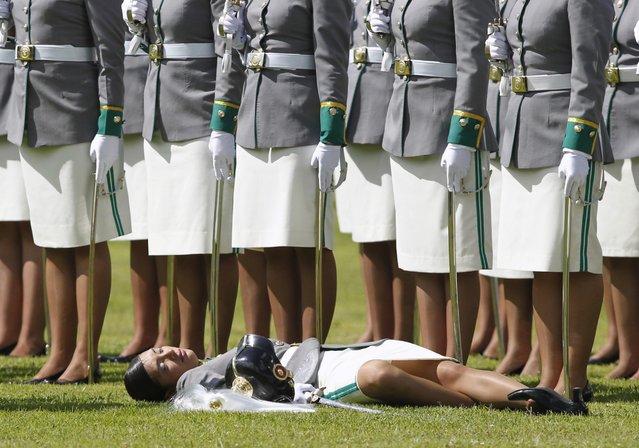 A cadet lies on the grass after collapsing during a promotion ceremony at a police school in Bogota December 7, 2012. (Photo by John Vizcaino/Reuters) 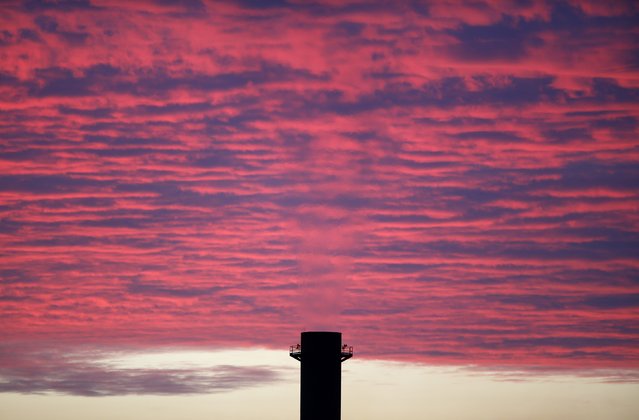 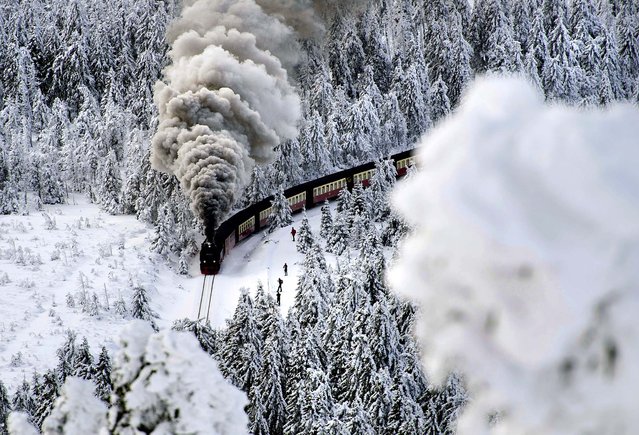 A train on a narrow-gauge railway line makes its way through the winter landscape near Wernigerode, Germany, December 8, 2012. (Photo by Jens Schlueter/Dapd) 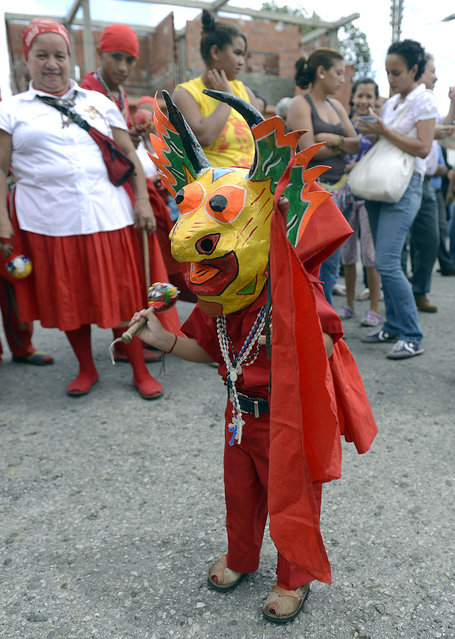 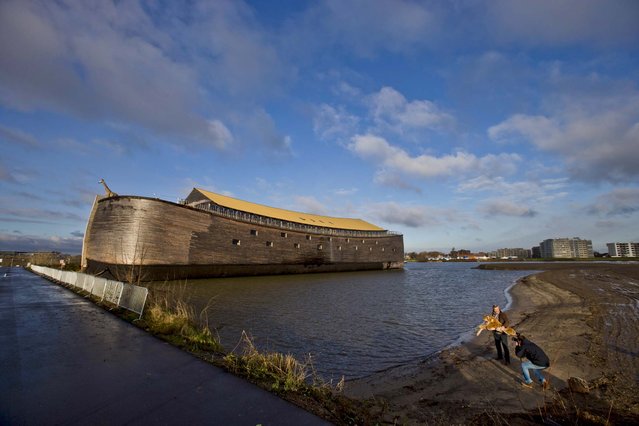 Johan Huibers holds a toy tiger for a photographer in front of the full scale replica of Noah's Ark in Dordrecht, Netherlands, December 10, 2012. Three thousand people a day can visit the replica. (Photo by Peter Dejong/Associated Press) 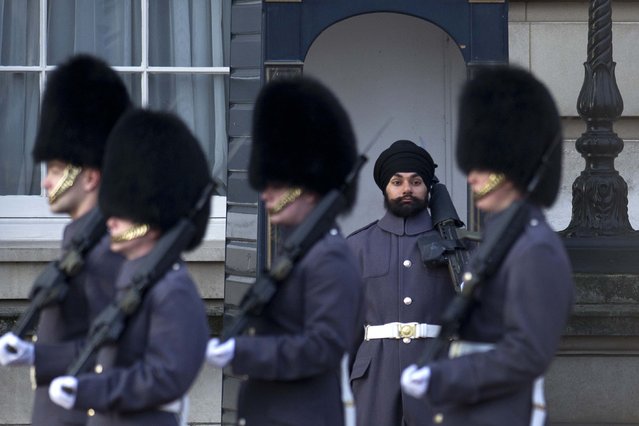 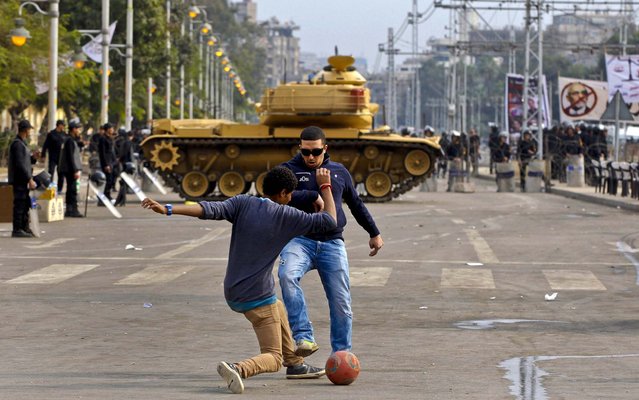 Protesters play with a ball in front of a tank securing the area around the presidential palace in Cairo, Egypt, December 14, 2012. Opposing sides in Egypt's political crisis were staging rival rallies on the final day before voting starts on a contentious draft constitution that has plunged the country into turmoil and deeply divided the nation. (Photo by Petr David Josek/Associated Press) 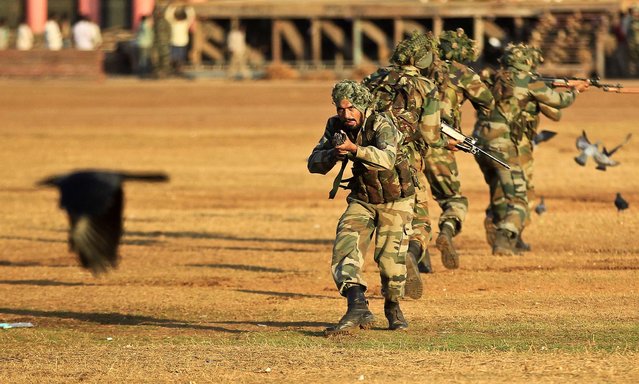 Army soldiers perform a drill for the upcoming Mallakhamb, a traditional Indian gymnastics on a vertical wooden pole, during a rehearsal for Victory Day celebrations in Mumbai, India, December 13, 2012. The celebration is December 16, to commemorate the military victory over Pakistan in 1971. (Photo by Rajanish Kakade/Associated Press) 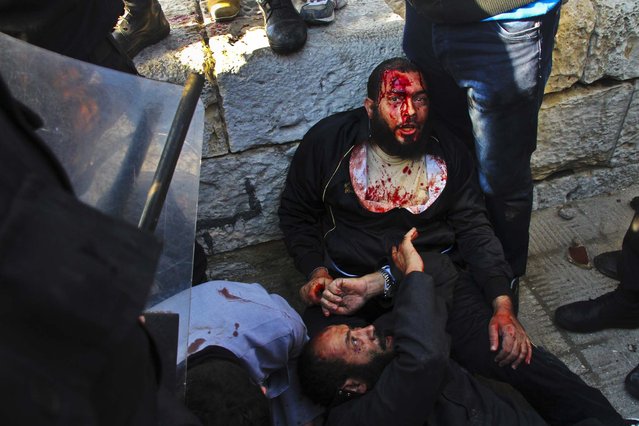 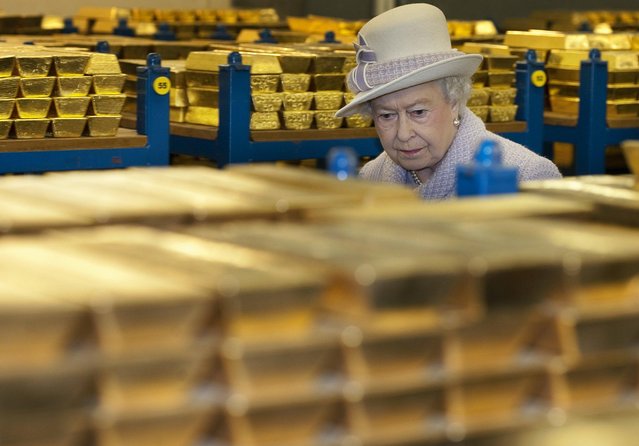 Queen Elizabeth II inspects gold reserves in a vault at the Bank of England in London, December 13, 2012. (Photo by Eddie Mulholland) 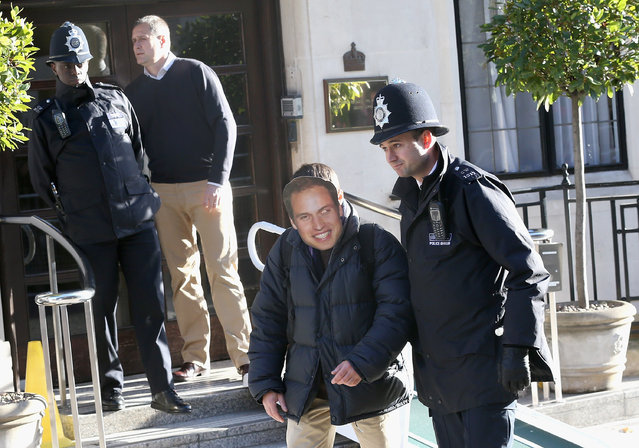 A man wearing a Prince William, Duke of Cambridge mask is escorted away by a police officer from the King Edward VII Private Hospital on December 4, 2012 in London, England. Catherine, Duchess of Cambridge spent her first night in the hospital after yesterday's announement of her pregnancy and the fact she was suffering from hyperemesis gravidarum or acute morning sickness. (Photo by Chris Jackson) 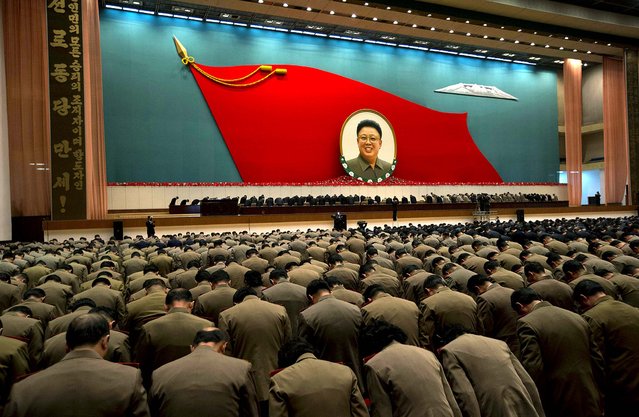 North Korean military officers bow at an image of the late North Korean leader Kim Jong Il during a national meeting of top party and military officials, on the eve of the first anniversary of Kim's death, in Pyongyang, December 16, 2012. (Photo by Ng Han Guan/Associated Press) 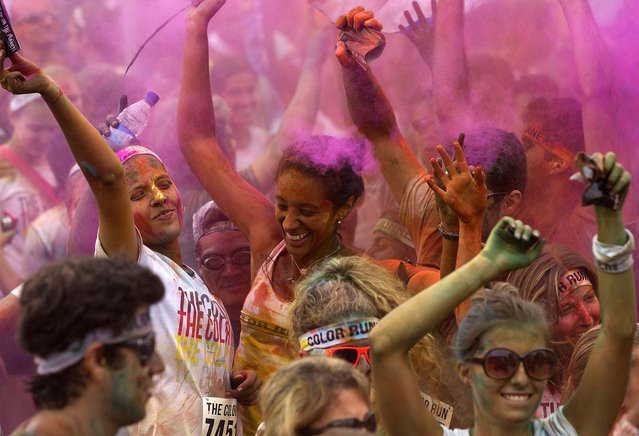 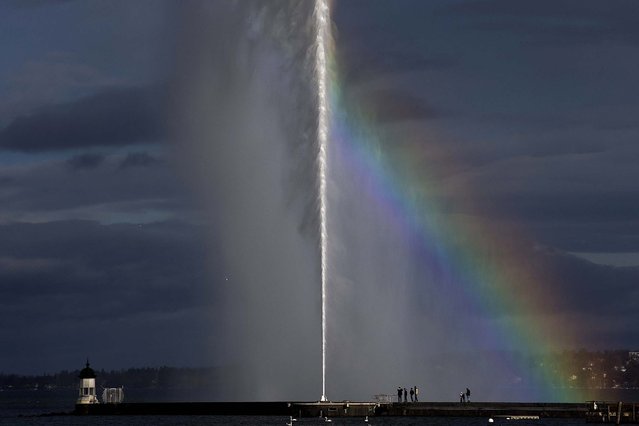 A rainbow is formed next to the water fountain (Jet d'eau) in front of a lighthouse in the harbor of Geneva, Switzerland, December 16, 2012. (Photo by Salvatore Di Nolfi/Keystone) 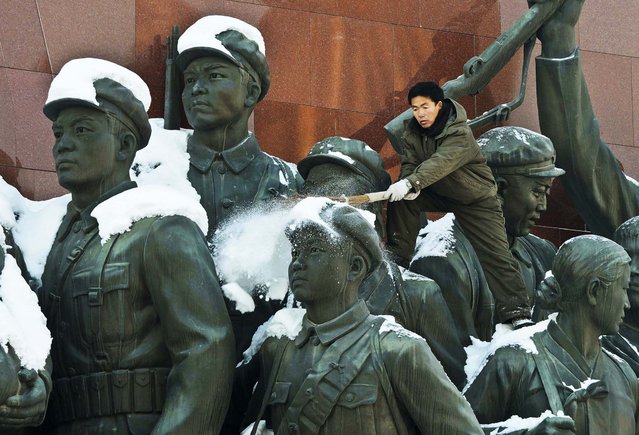 A man brushes snow from the monument of anti-Japanese revolutionary fighters on Mansu Hill in Pyongyang, North Korea, December 10, 2012. (Photo by Kyodo News) 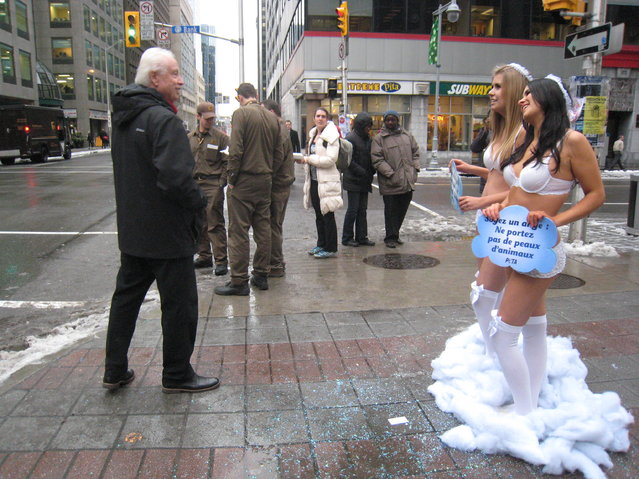 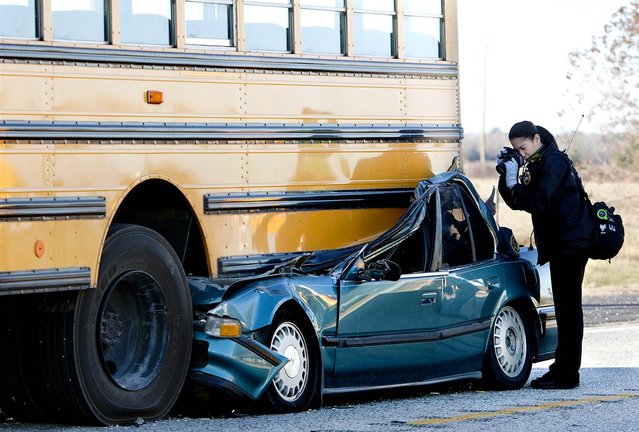 An investigator photographs the aftermath of a fatal bus accident on December 12, in Hockley, Texas. Authorities said the driver of the car died; the three children and driver on the bus were not injured. The cause of the accident is under investigation. (Photo by Cody Duty / Houston Chronicle via AP) 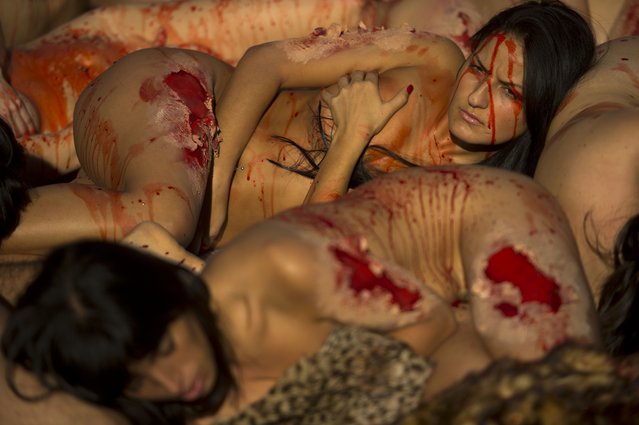 Activists of the animal-rights group AnimaNaturalis protest naked covered with fake blood against the use of fur in the textil industry in Madrid on December 2, 2012. (Photo by Pierre-Philippe Marcou/AFP Photo)