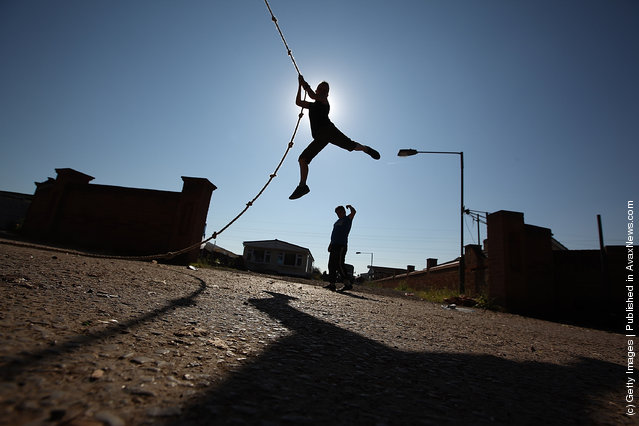 A traveller youth plays on a rope at Dale Farm travellers camp on September 29, 2011 near Basildon, England. Traveller residents on the illegal Dale Farm settlement are at The High Court in London to hear if a judicial review of the eviction can take place. (Photo by Peter Macdiarmid/Getty Images) 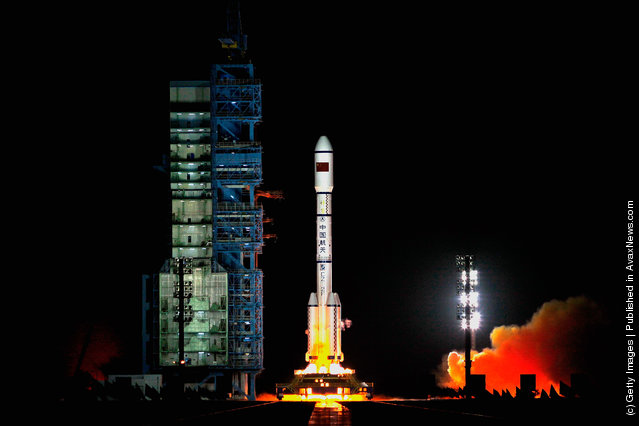 A Long March 2F rocket carrying the country's first space laboratory module Tiangong-1 lifts off from the Jiuquan Satellite Launch Center on September 29, 2011 in Jiuquan, Gansu province of China. The unmanned Tiangong-1 will stay in orbit for two years and dock with China's Shenzhou-8, -9 and -10 spacecraft with the eventual goal of establishing a manned Chinese space station around 2020. (Photo by Lintao Zhang/Getty Images) 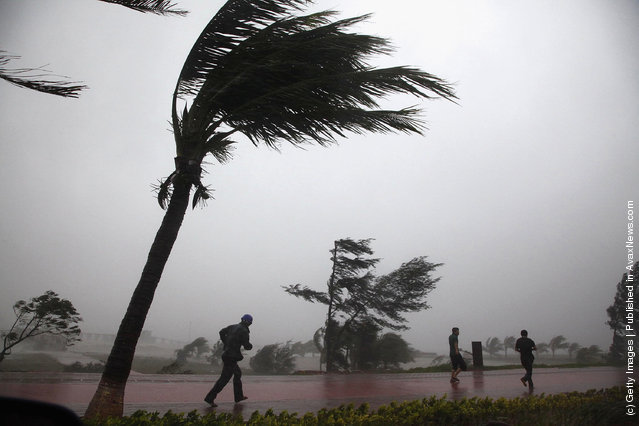 People run in strong winds on September 29, 2011 in Haikou, Hainan Province of China. Typhoon Nesat, the 17th typhoon to hit China this year, landed in Wenchang of Hainan province on Thursday afternoon, forcing the evacuation of 320,000 residents in Hainan province. (Photo by ChinaFotoPress/Getty Images) 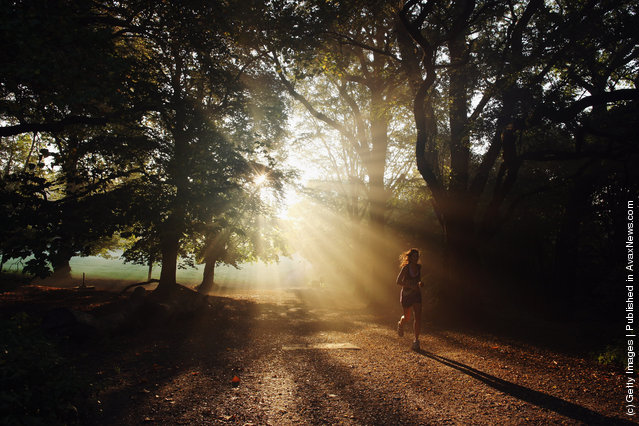 A woman runs through the early morning mist on Hampstead Heath on September 30, 2011 in London, England. Much of the UK is enjoying a spell of unseasonably hot weather which is expected to last into next week. (Photo by Dan Kitwood/Getty Images) 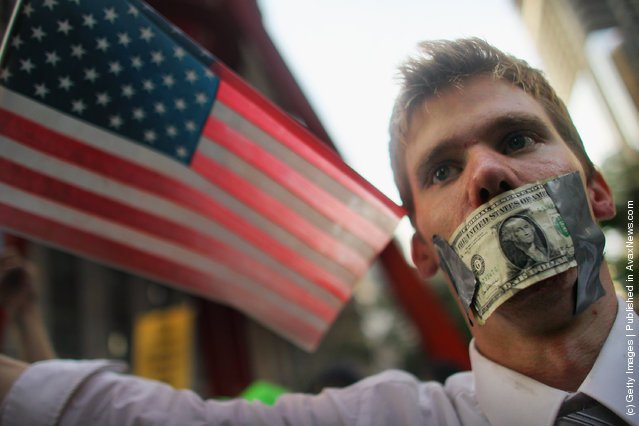 A protester wears a dollar bill over his mouth at the start of a march by demonstrators opposed to corporate profits on Wall Street on September 30, 2011 New York City. Over one thousand activists affiliated with the Occupy Wall Street movement marched to protest police brutality while clogging traffic in Lower Manhattan. (Photo by Mario Tama/Getty Images) 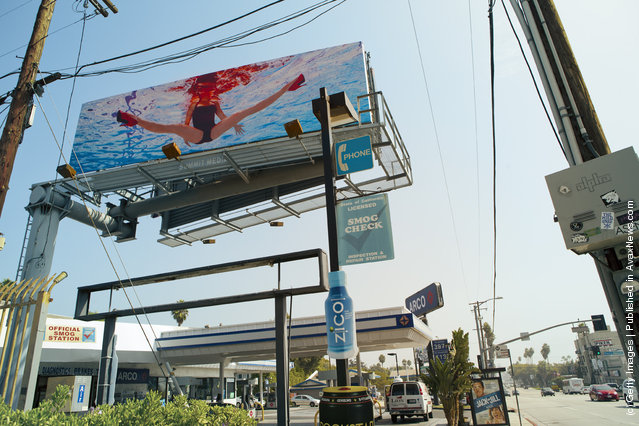 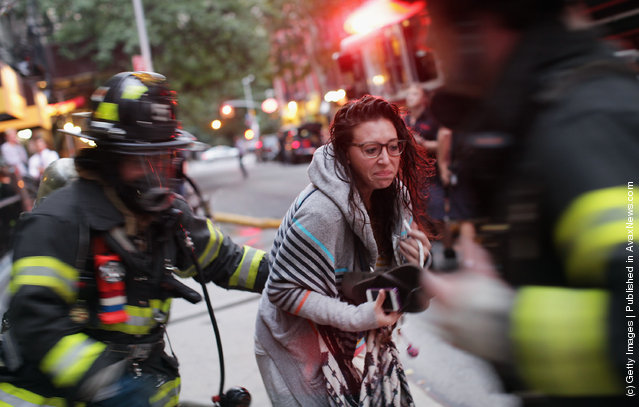 New York City firefighters rescue a woman from a building fire on September 30, 2011 in New York City. The fire, which started shortly after 6pm, resulted in the evacuation of the building on East 8th street between Avenue A and 1st street. (Photo by Spencer Platt/Getty Images) 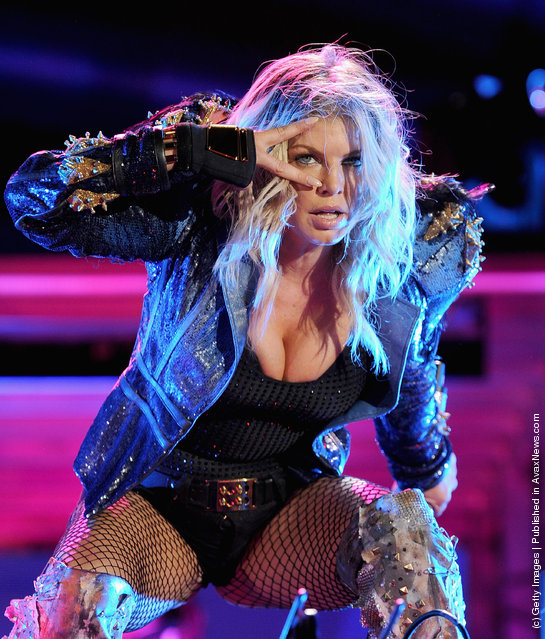 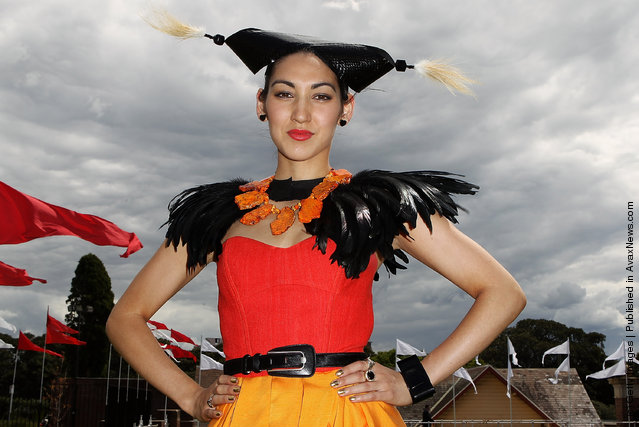 Angela Menz, a competitor in the fashion in the fields contest, attends Epsom Super Saturday at Randwick Racecourse on October 1, 2011 in Sydney, Australia. (Photo by Mark Metcalfe/Getty Images) 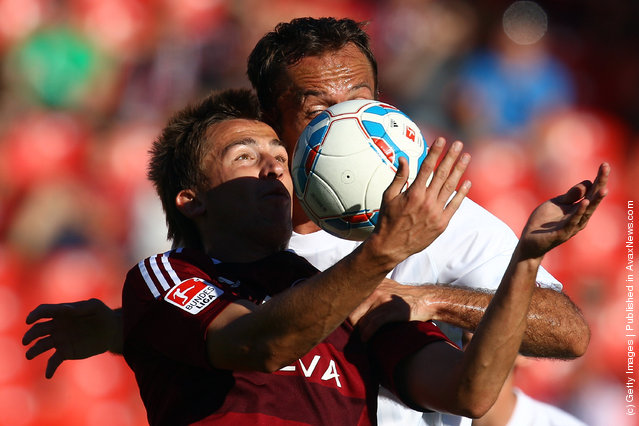 Tomas Pekhart (L) of Nuernberg battles for the ball with Nikolce Noveski of Mainz during the Bundesliga match between 1.FC Nuernberg and FSV Mainz 05 at Easy Credit Stadium on October 1, 2011 in Nuremberg, Germany. (Photo by Alexander Hassenstein/Bongarts/Getty Images) 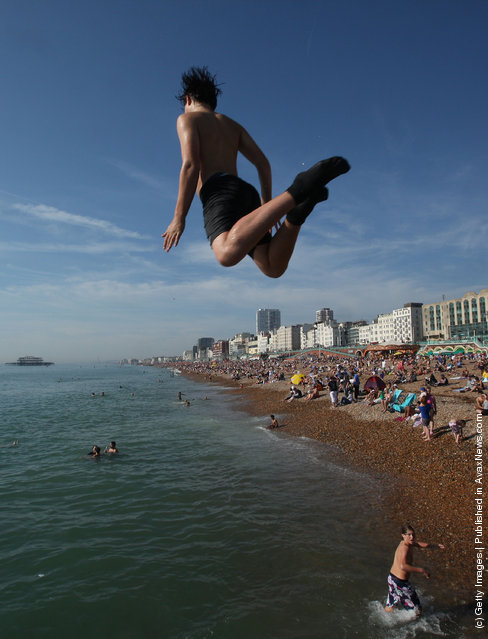 A youth jumps into the water from a sea wall on October 1, 2011 in Brighton, England. Southern parts of the United Kingdom are continuing to enjoy a late season burst of high temperatures with a record October high of 29.5C (85.1F) measured at Gravesend in Kent. (Photo by Peter Macdiarmid/Getty Images) 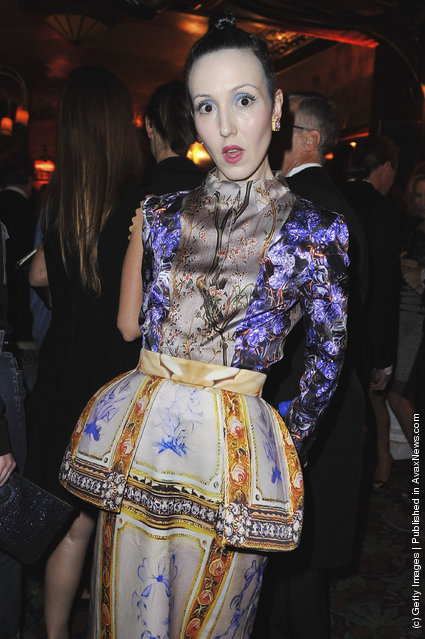