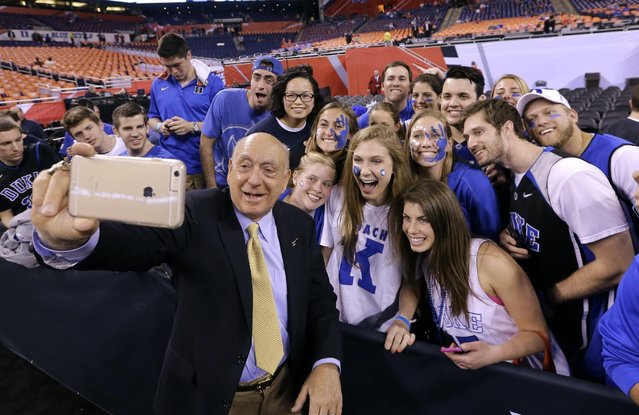 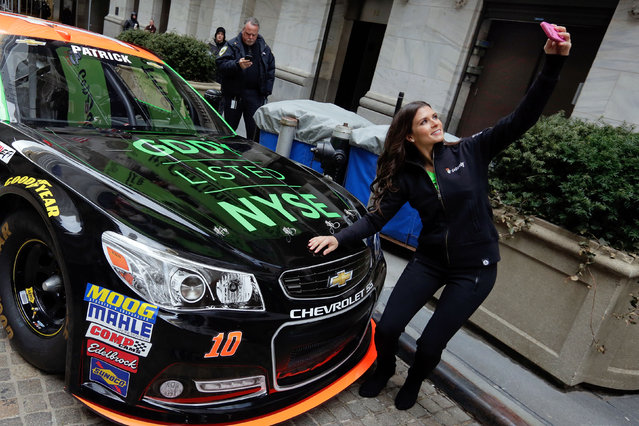 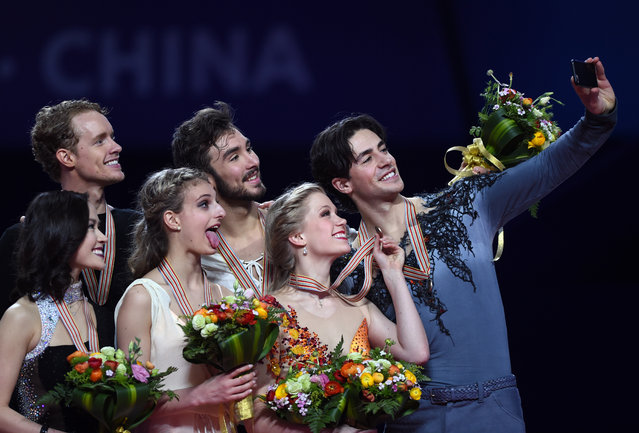 (L-R) Silver medalists Madison Chock and Evan Bates of the US, gold medalists Gabriella Papadakis and Guillaume Cizeron of France and bronze medalists Kaitlyn Weaver and Andrew Poje of Canada pose during the awards ceremony of the ice dance of the 2015 ISU World Figure Skating Championships at Shanghai Oriental Sports Center in Shanghai, on March 27, 2015. (Photo by Johannes Eisele/AFP Photo) 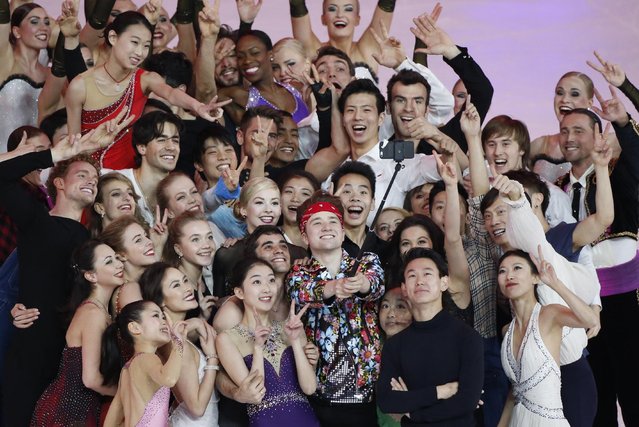 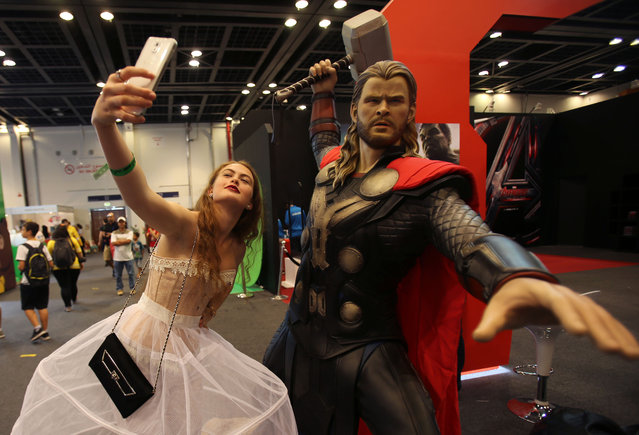 A woman takes a selfie next to a model of Thor during the Middle East Film & Comic Con (MEFCC) in Dubai, United Arab Emirates, Saturday, April 11, 2015. (Photo by Kamran Jebreili/AP Photo) 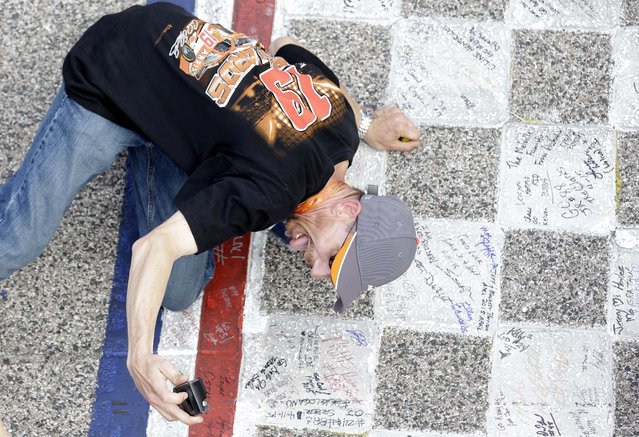 A fan takes a photo of himself at the start-finish line on the track before the NASCAR Sprint Cup auto race at Texas Motor Speedway in Fort Worth, Texas, Saturday, April 11, 2015. (Photo by Tim Sharp/AP Photo) 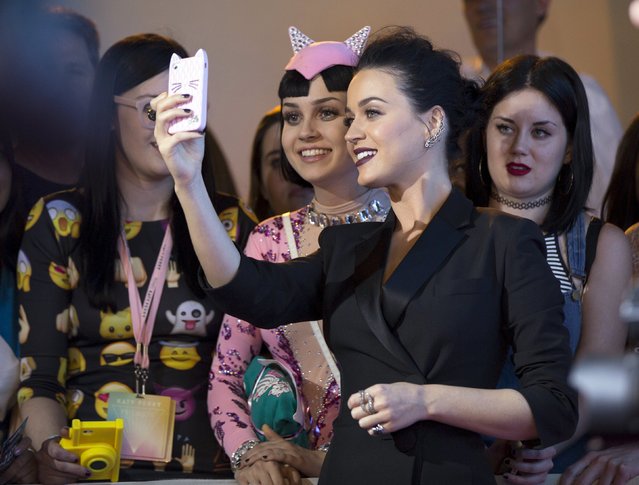 Singer Katy Perry takes a selfie with a fan at the premiere screening of “Katy Perry: The Prismatic World Tour” in Los Angeles, California March 26, 2015. (Photo by Mario Anzuoni/Reuters) 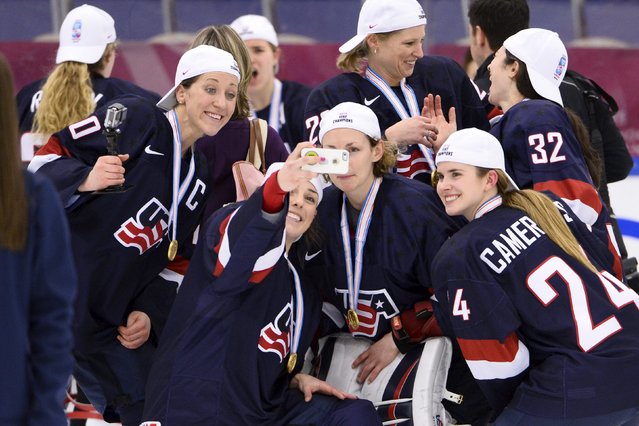 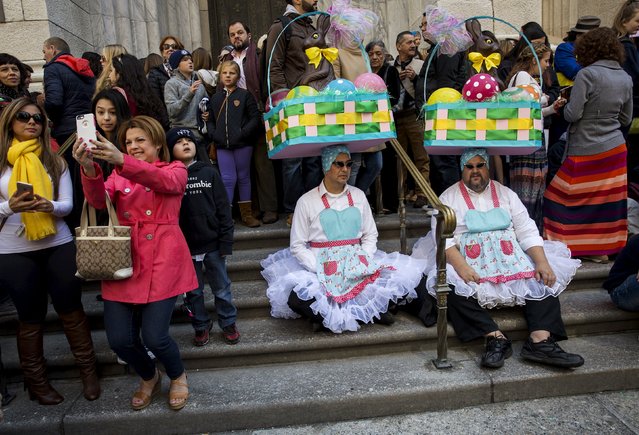 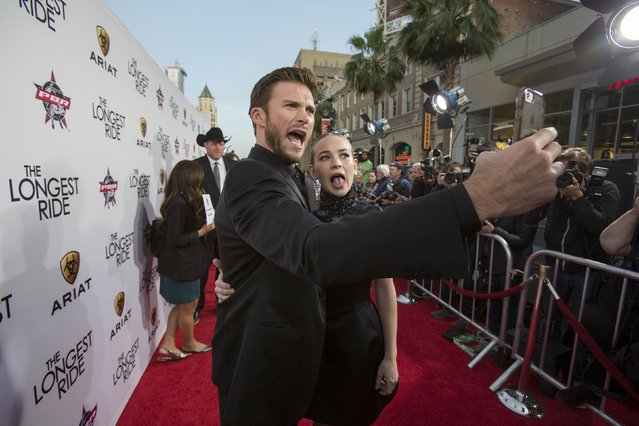 Cast members Scott Eastwood and Britt Robertson take a selfie at the premiere of “The Longest Ride” at the TCL Chinese theatre in Hollywood, California April 6, 2015. (Photo by Mario Anzuoni/Reuters) 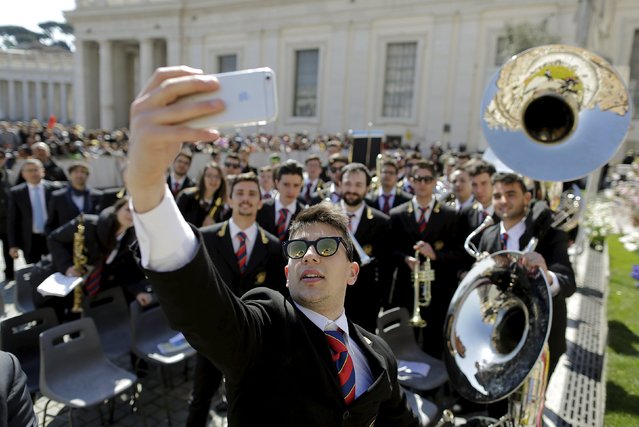 A musician takes a selfie with others members of his band during Pope Francis' Wednesday general audience in Saint Peter's Square at the Vatican April 8, 2015. (Photo by Tony Gentile/Reuters) 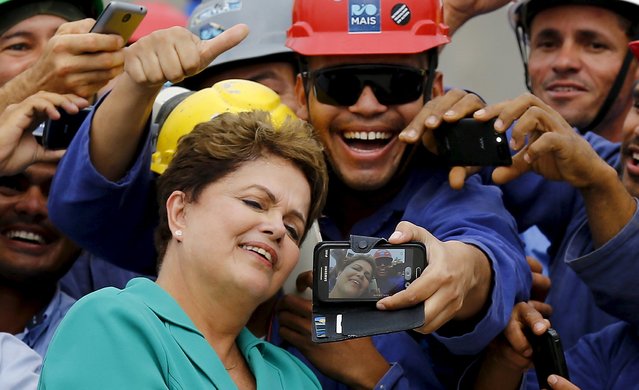 Brazil's President Dilma Rousseff takes a selfie with workers during a visit to the Rio 2016 Olympic Park in Rio de Janeiro in this September 30, 2014 file photo. (Photo by Ricardo Moraes/Reuters) 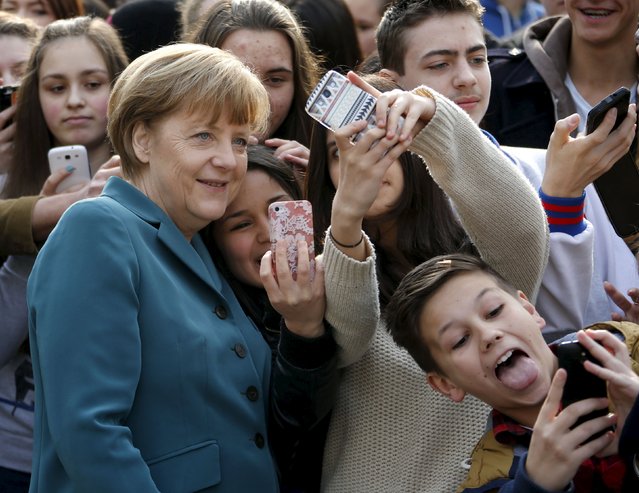 Pupils take selfies with German Chancellor Angela Merkel, as she arrives for a visit at Robert-Jungk Europe high school as part of the Europe-Project Day, in Berlin in this March 31, 2014 file photo. (Photo by Fabrizio Bensch/Reuters) 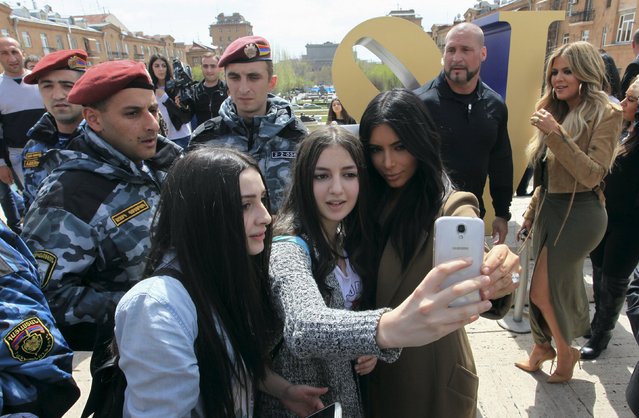 U.S. television personality Kim Kardashian (R, front) poses for a picture with local residents, with her sister Khloe Kardashian standing nearby, while sightseeing in central Yerevan, April 9, 2015. Kardashian received a rapturous welcome in her ancestors' homeland, Armenia, on a visit that could draw attention to the 100th anniversary of mass killings of Armenians in 1915. She made no mention of the mass killings of Armenians by Ottoman soldiers in World War One but some fans hoped the visit would put the spotlight on anniversary events on April 24. (Photo by Vahram Baghdasaryan/Reuters) 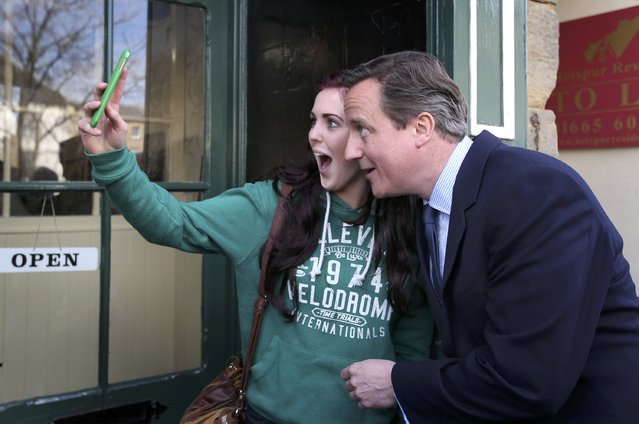 Britain's Prime Minister David Cameron poses for a selfie with a local woman as he campaigns in Alnwick, April 13, 2015. (Photo by Peter Macdiarmird/Reuters) A flash illuminates girls taking a group selfie during the Bisket festival in Bhaktapur April 13, 2015. The festival, which runs for more than a week and coincides with the Nepalese New Year, involves devotees offering prayers and the pulling of two chariots, one bearing the idol of God Bhairab and the other with the idol of Goddess Bhadrakali, around the ancient city of Bhaktapur. Devotees participate in the festival with the belief that they will be blessed with good health and fortune, and with a bountiful harvest for the coming year. (Photo by Navesh Chitrakar/Reuters) 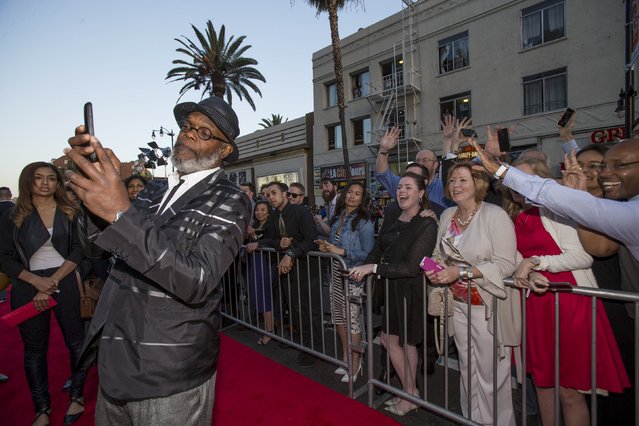 Cast member Samuel L. Jackson takes a selfie in front of fans at the premiere of “Avengers: Age of Ultron” at Dolby theatre in Hollywood, California April 13, 2015. (Photo by Mario Anzuoni/Reuters) 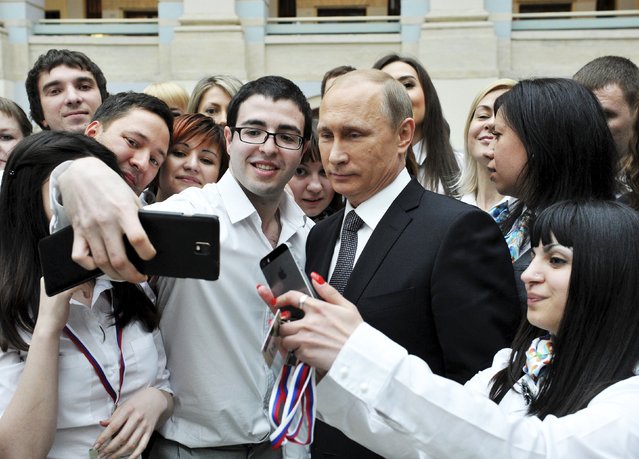 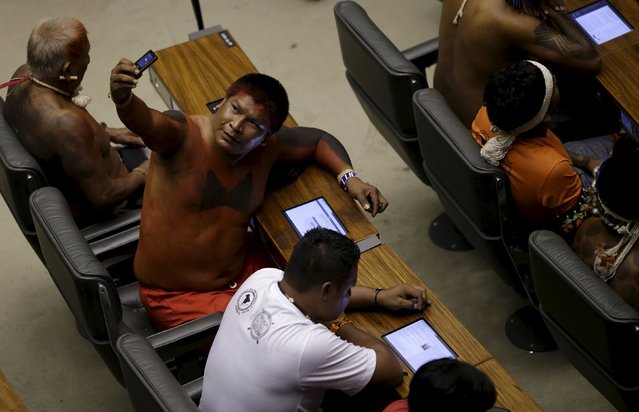 A Brazilian Indian from a indigenous ethnic group takes a selifie as he sits on deputies' seats at the Chamber of Deputies during a solemn session on National Indigenous Day in Brasilia April 16, 2015. (Photo by Ueslei Marcelino/Reuters) 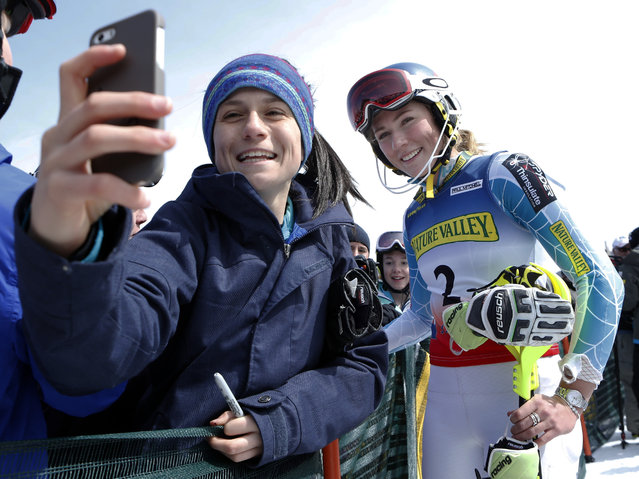 Two men take a selfie with French President Francois Hollande, right, at the “Muensterplatz” square in Bern, Switzerland, Wednesday, April 15, 2015. Hollande is on a two-day official visit in Switzerland. (Photo by Thomas Hodel/Keystone via AP) Jennifer Lopez takes a selfie with a fan as she arrives at the MTV Movie Awards at the Nokia Theatre on Sunday, April 12, 2015, in Los Angeles. (Photo by Matt Sayles/Invision/AP Photo) 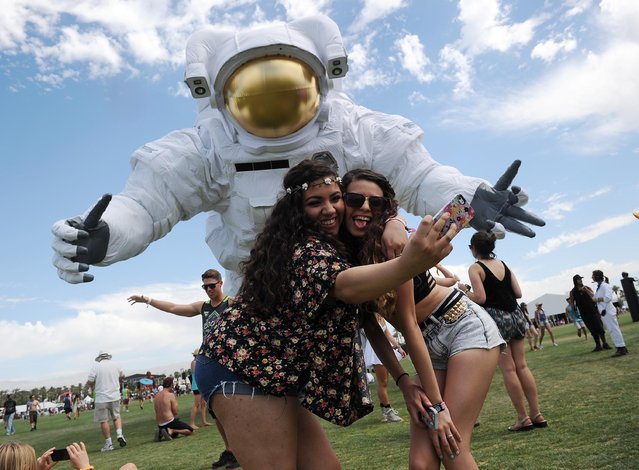 In this April 11, 2014 file photo, Coachella festivalgoers take pictures of themselves in front of the “Escape Velocity”, moving sculpture by Poetic Kinetics at the 2014 Coachella Music and Arts Festival in Indio, Calif. (Photo by Chris Pizzello/Invision/AP Photo) 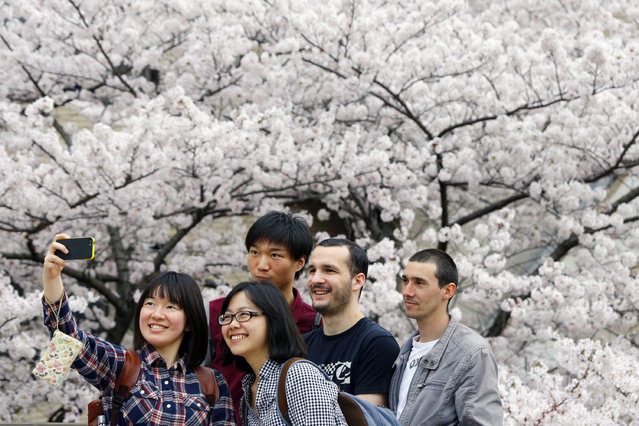 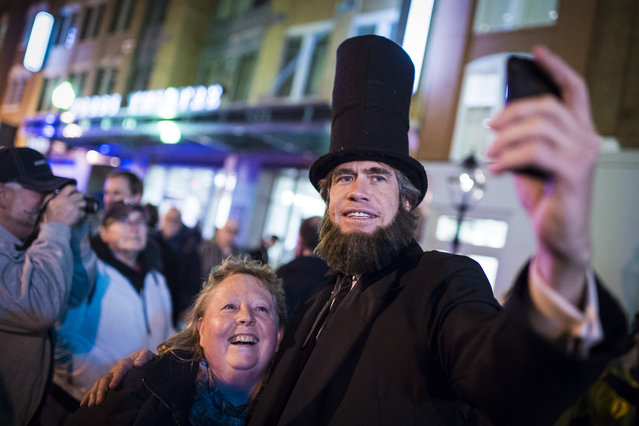 Scott Stewart dressed as Abraham Lincoln takes selfies with Susan Squires before a candlelight vigil where living historians recreated the scene from the night of April 14, 1865 on Tenth Street NW to commemorate the 150th anniversary of President Lincoln's assassination outside Ford's Theatre in Washington, DC on Tuesday April 14, 2015. (Photo by Jabin Botsford/The Washington Post) 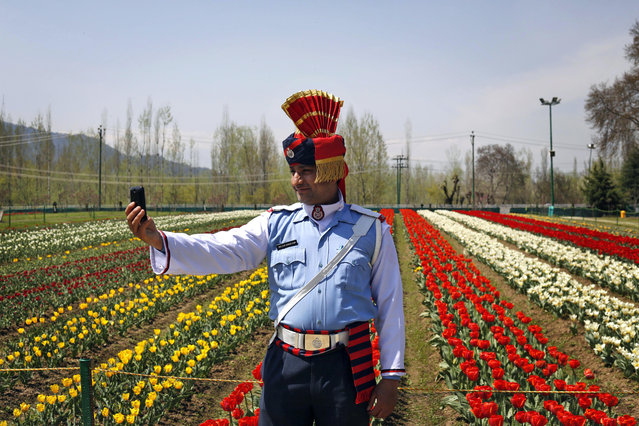