Touching Simply Some Photos Which Were Pleasant To Us Today 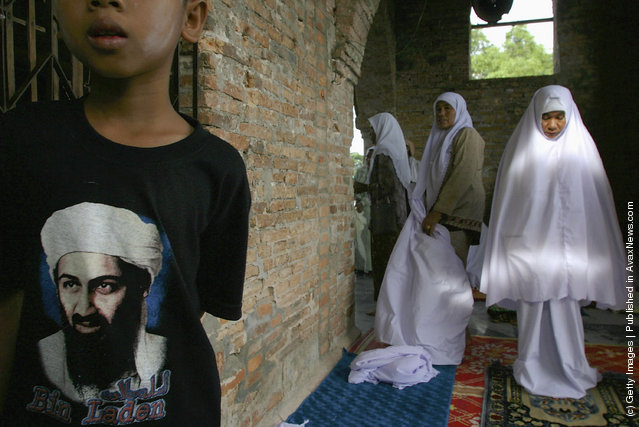 A young boy wears an Osama Bin Laden t-shirt whilst Muslim women pray at Krue Se Mosque on May 5, 2004 in Pattani province, southern Thailand. Thousands of Muslims are flocking to the Krue Se Mosque the sight of a bloody shootout with police where 32 suspected militants were killed on Wednesday. Initial suspicion as to the instigators included Jamaal Islameer in league with Osama Bin Laden however there is no proof of this. (Photo by Daniel Berehulak/Getty Images) 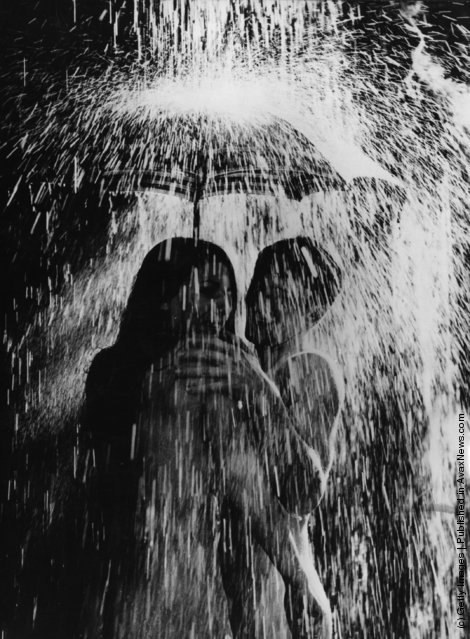 A couple standing under a waterfall, from Peter Raba's Munich exhibition. (Photo by Keystone/Getty Images). 1968 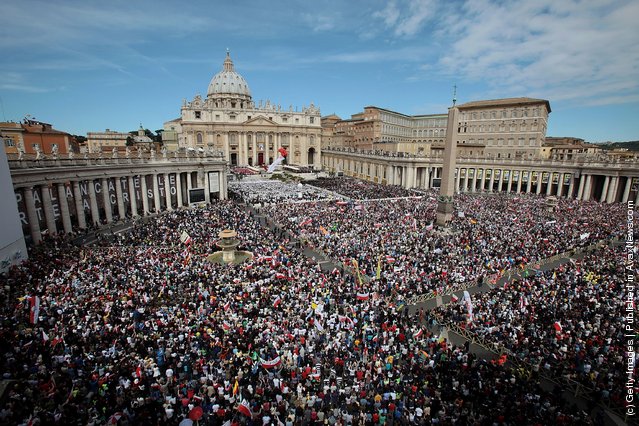 A general view of St. Peter's Square during the John Paul II Beatification Ceremony held by Pope Benedict XVI on May 1, 2011 in Vatican City, Vatican. The ceremony marking the beatification and the last stages of the process to elevate Pope John Paul II to sainthood was led by his successor Pope Benedict XI and attended by tens of thousands of pilgrims alongside heads of state and dignitaries. (Photo by Elisabetta Villa/Getty Images) Joe Davis, the undefeated world snooker champion for 20 years, demonstrates one of his trick shots at the Trocadero in Shaftesbury Avenue using the new Apollo Tubular Billiard Cue, which he designed himself. (Photo by George W. Hales/Fox Photos/Getty Images). 18th November 1954 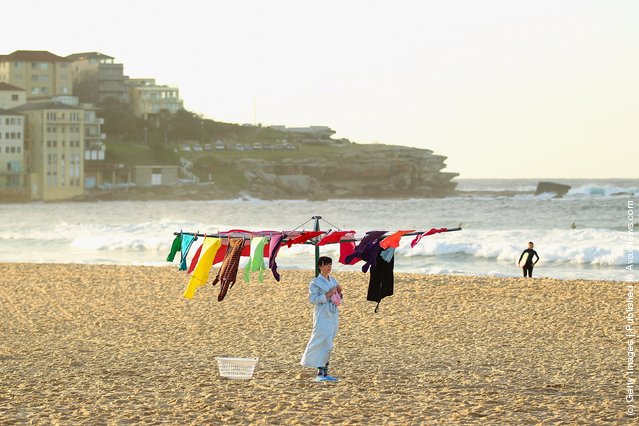 An art installtion consisting of eight Hills Hoists clothes lines complemented by eight 'mums hanging out washing' is seen at Bondi Beach on May 1, 2011 in Sydney, Australia. The installation is the latest in a series of surrealist works by artist Andrew Baines, this time to highlight the loss of the typical backyard due to the increase of high density living. The Hills Hoist is considered the epitame of Australian backyards, with Bondi Beach considered Sydney's backyard. (Photo by Cameron Spencer/Getty Images) 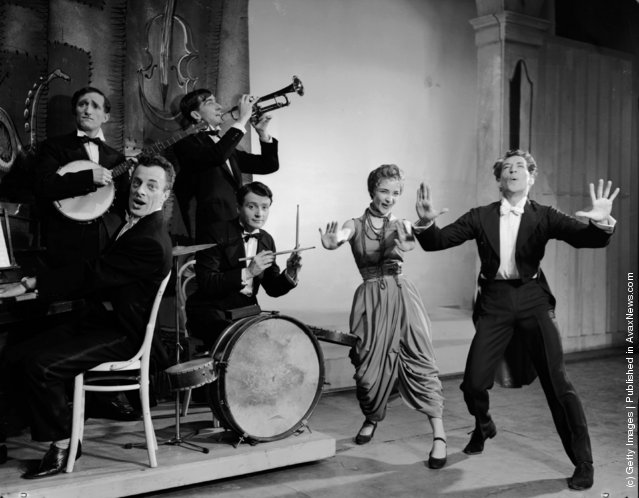 Cast members of the play “For Amusement Only” as dancing band members during a performance at London's Apollo Theatre. (Photo by Denis De Marney/Getty Images). 5th June 1956 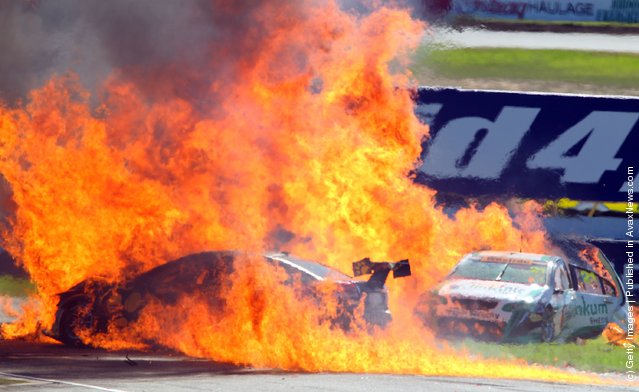 The race cars of Steve Owen and Karl Reindler are pictured on fire after a major crash on the start line in race 2 during the V8 Supercar round at Barbagallo Raceway on May 1, 2011 in Perth, Australia. (Photo by Paul Kane/Getty Images) 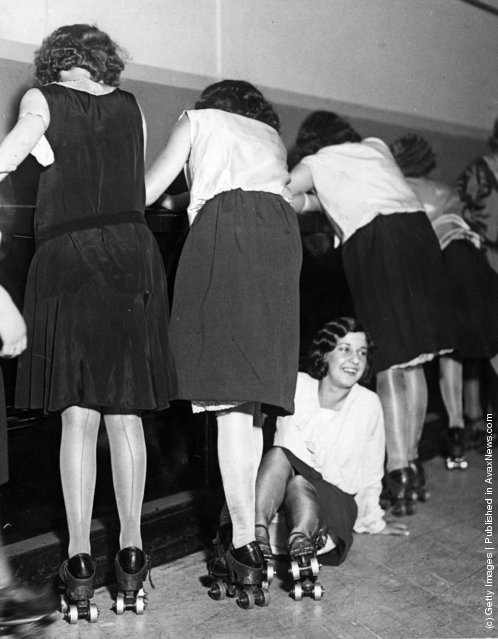 A group of roller skaters at an indoor rink hang on to the sides and one takes a tumble. (Photo by General Photographic Agency/Getty Images). Circa 1935 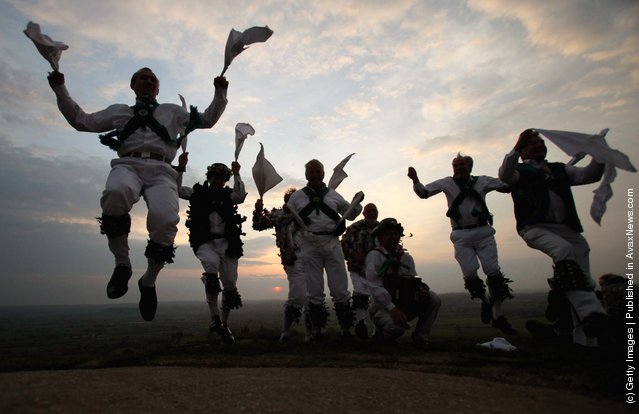 Morris Men dance at a May Day dawn celebration service in front of St. Michael's Tower on Glastonbury Tor on May 1, 2011 in Glastonbury, England. Although more synonymous with International Workers' Day, or Labour Day, May Day or Beltane is celebrated by druids and pagans as the beginning of summer and the chance to celebrate the coming of the season of warmth and light. Other traditional English May Day rites and celebrations include Morris dancing and the crowning of a May Queen with celebrations involving a Maypole. (Photo by Matt Cardy/Getty Images) 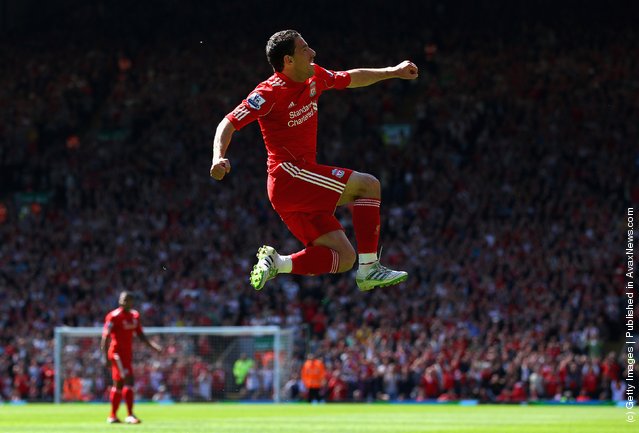 Maxi Rodriguez of Liverpool leaps into the air to celebrate after scoring the first goal during the Barclays Premier League match between Liverpool and Newcastle United at Anfield on May 1, 2011 in Liverpool, England. (Photo by Clive Brunskill/Getty Images) 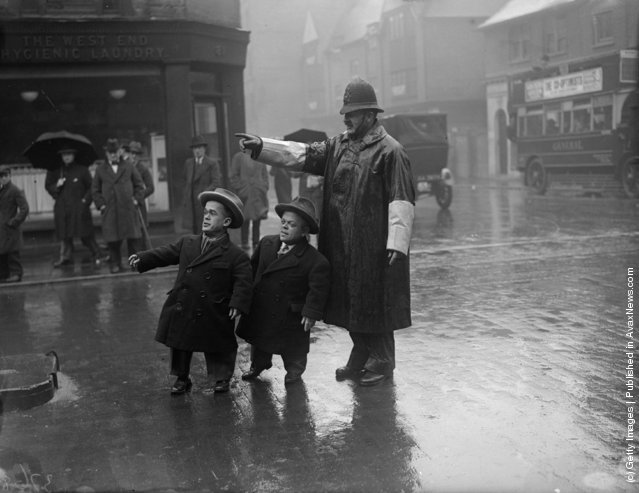 Hungarian dwarves Roli (Rolly) and Poli (Zoli) who are appearing at Olympia. Zoli, or Zoltan Hirsch (1887–1944)appeared in Hungarian silent films and performed in circuses around the globe, eventually dying at Auschwitz (Photo by Fox Photos/Getty Images). 30th December 1930 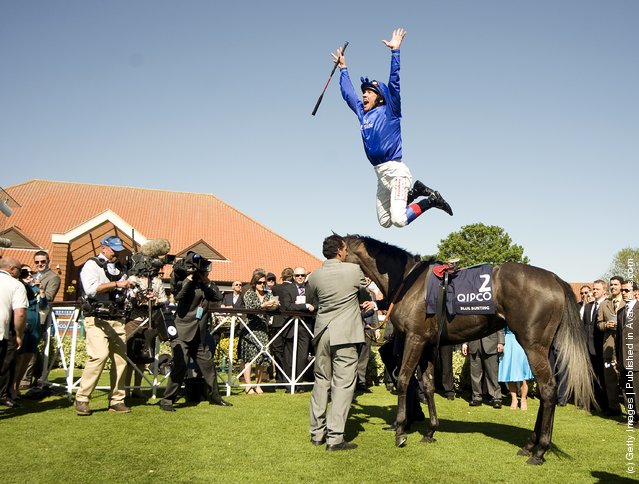 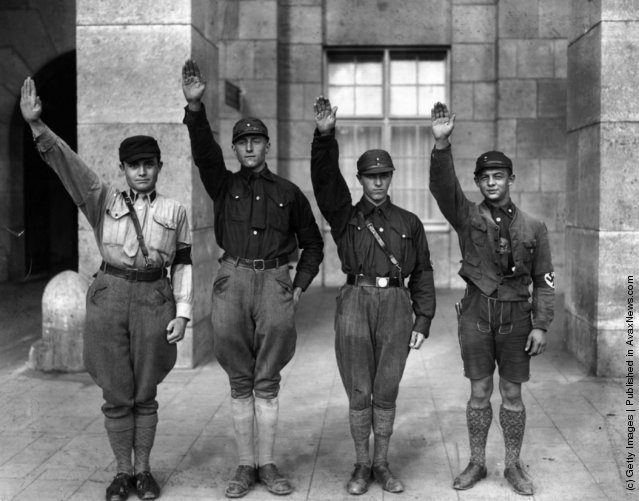 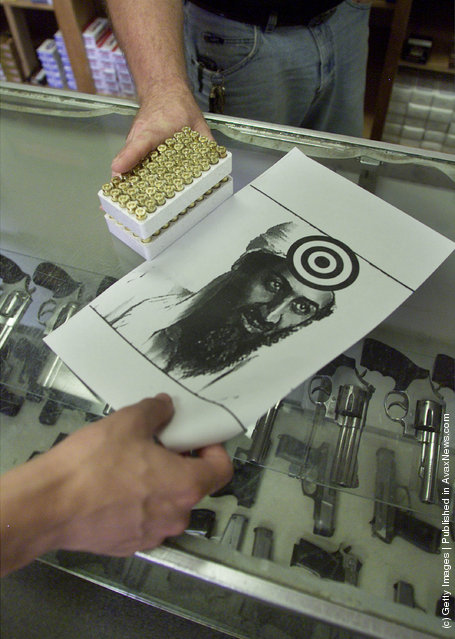 A customer buys a box of bullits and a target of Osama Bin Laden October 3, 2001 at Blue Ridge Arsenal in Chantilly, VA. Guns sales have risen across America since the September 11th terrorist attacks. (Photo by Mark Wilson/Getty Images) 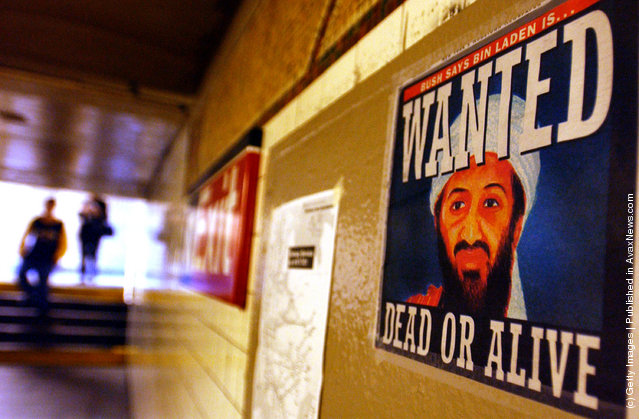 A newspaper cover in the form of an Osama bin Laden wanted poster hangs on a wall September 18, 2001 in a Brooklyn, New York subway station. Over 5,000 people died in the September 11 terrorist attack on the World Trade Center, and bin Laden has emerged as the leading suspect. (Photo by Spencer Platt/Getty Images) A mural showing Osama Bin Laden in crosshairs is next to people standing among veterans grave markers during a Memorial Day ceremony May 31, 2004 in Pompano Beach, Florida. The event was one of many around the country honoring those who have lost their lives fighting for the United States military. (Photo by Joe Raedle/Getty Images) 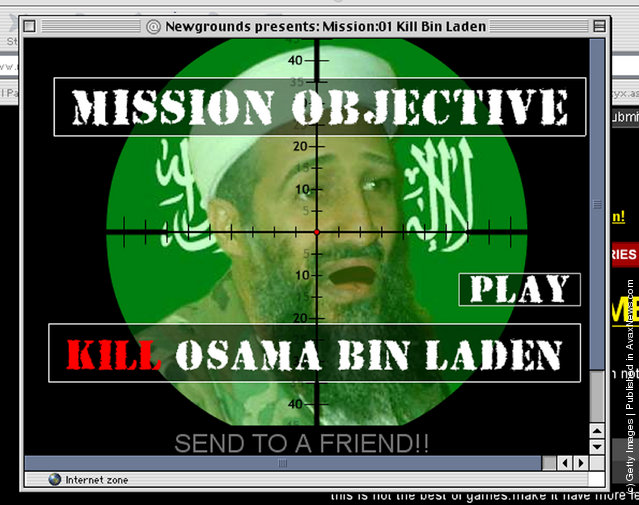 Newgrounds.com offers live-action video games on its Internet site such as “Mission: Kill Bin Laden” in the wake of the September 11 terrorist attacks in the U.S. Osama bin Laden is the prime suspect responsible for the attacks. (Photo by Getty Images) 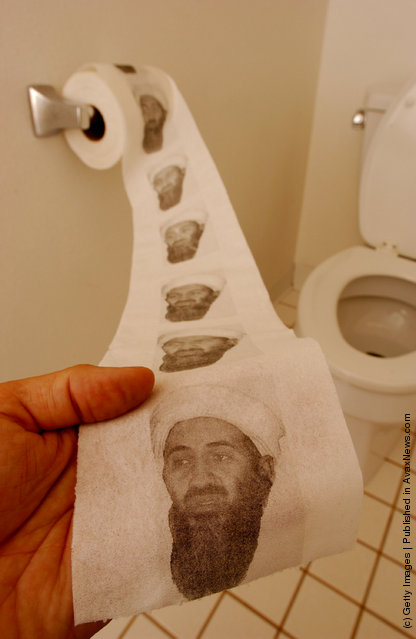 Toilet paper with images of suspected terrorist leader Osama bin Laden is displayed by Impact Products, LLC, October 17, 2001 in Agoura Hills, CA. Impact Products has been producing a variety of anti-bin Laden products since shortly after the terror attacks on Washington D.C. and New York. (Photo by David McNew/Getty Images) 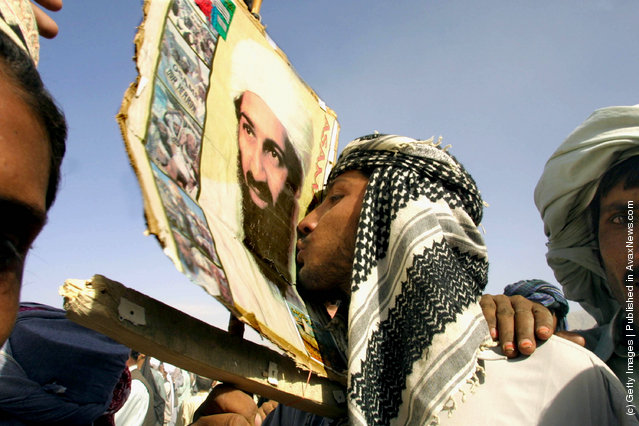 A Pro-Taliban supporter kisses a poster of Osama bin Laden during a rally October 1, 2001 in the town of Quetta, Pakistan. Quetta is located near the Afghanistan border. (Photo by Paula Bronstein/Getty Images)
Edit Del
02 May 2011 08:02:00, post received 0 comments
Publication archive:
←   →
Popular tags:
All tags
Last searches: