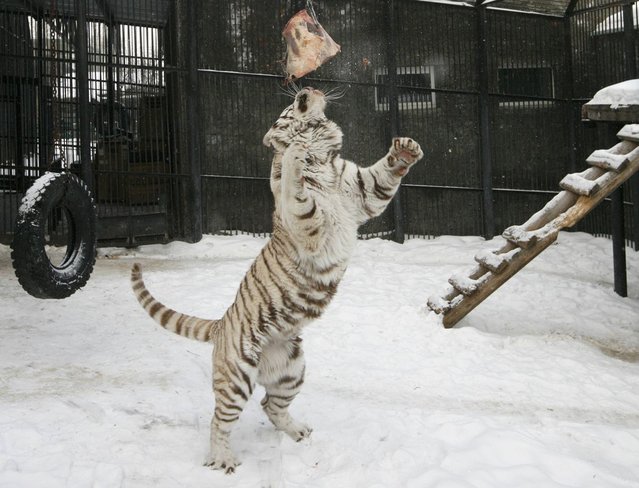 Khan, a 3-year-old male Bengali white tiger, participates in his weekly training session with a piece of meat inside an open-air cage at the Royev Ruchey Zoo in a surburb of Russia's Siberian city of Krasnoyarsk, February 27, 2013. Every Wednesday, a zookeeper will train Khan using meat suspended on a chain so that the tiger will not lose motor and mental skills associated with hunting, an official representative of the Zoo said. (Photo by Ilya Naymushin/Reuters) 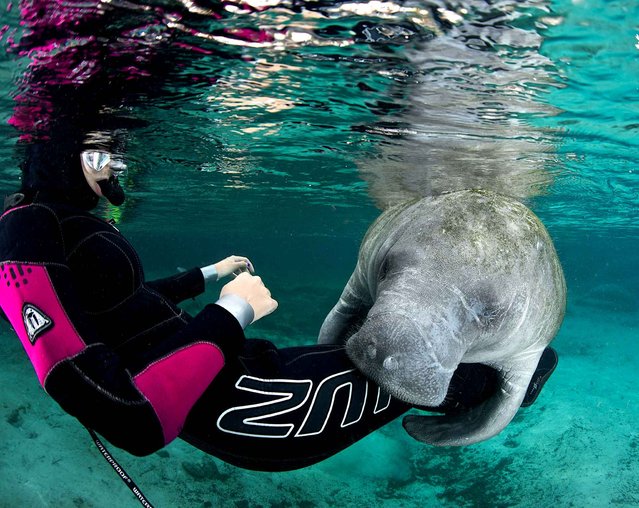 Diver Margaux Maes receives a hug from a manatee in Florida. The marine mammals – which can weigh more than a tiger shark – are usually known for shying away from humans. (Photo by Ellen Cuylaerts/Caters News) 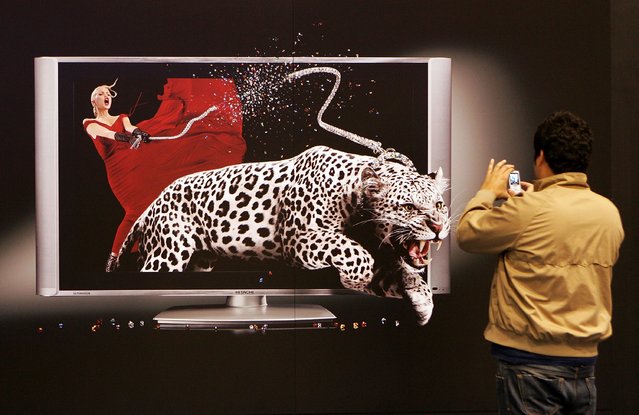 An attendee takes a picture of an ad for a Hitachi television outside the company's booth at the Las Vegas Convention Center during the 2007 International Consumer Electronics Show January 9, 2007 in Las Vegas, Nevada. (Photo by Ethan Miller/Getty Images) 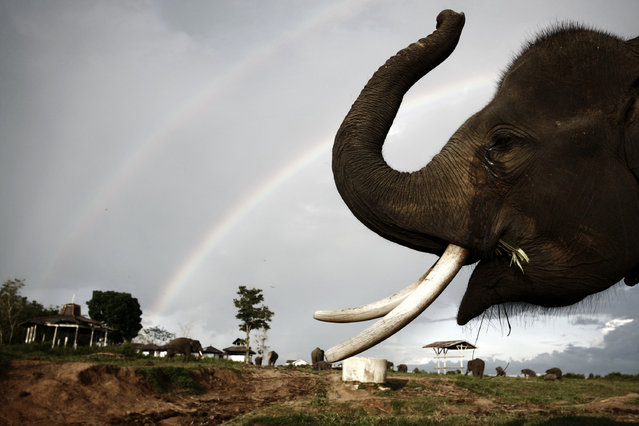 A Sumatran elephant rest inbetween patrolling the conservation looking for illegal loggers who are destroying the habitat of Sumatran elephants on June 12, 2010 in Way Kambas, Lampung, Indonesia. (Photo by Ulet Ifansasti/Getty Images) 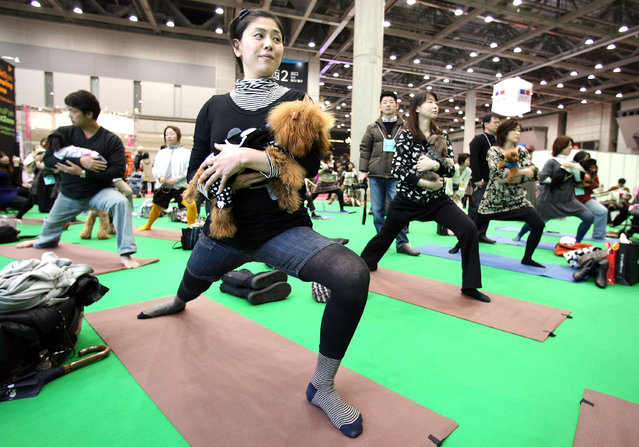 Owners and their dogs experience Dog Yoga at the New Year Dog Party held at Tokyo Big Sight on January 12, 2008 in Tokyo, Japan. The event is opened for 2 days on the weekend for the owners and their dogs to enjoy experiencing dogs' fashion and life style with dogs. (Photo by Junko Kimura/Getty Images) 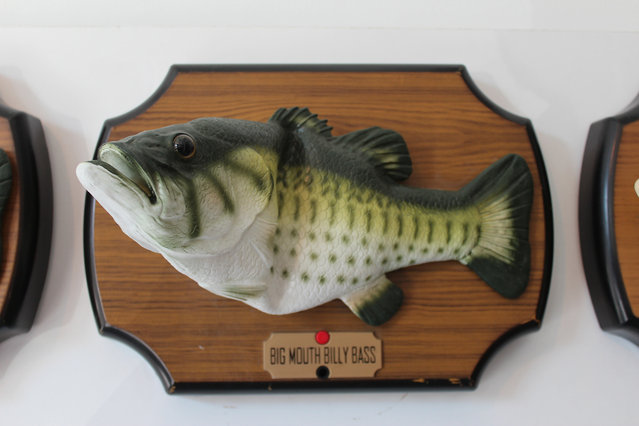 Someone broke into Rochester, Minnesota's Hooked on Fishing bait and tackle shop but nothing was stolen, thanks to the store's guard fish. Big Mouth Billy Bass is a mechanical motion-activated fish who sings “Take Me To the River” when someone walks past him. It seems that Mr. Bass' dulcet tones frightened an intruder away, according to the Star-Tribune. (Photo by Flickr/Chazevans) 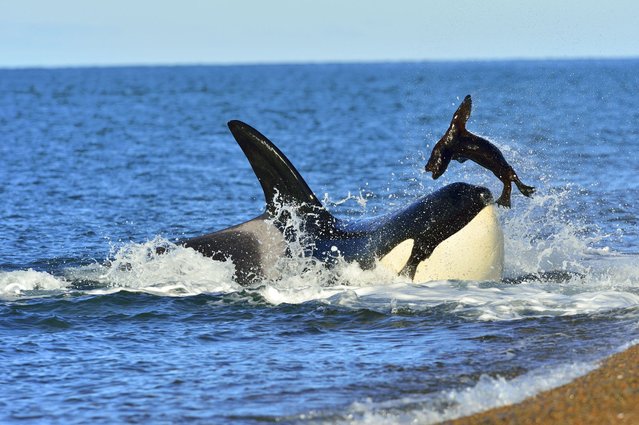 This is the incredible moment a giant killer whale was almost beached as it launched a vicious attack on a sea lion and nearly became stranded on the shore. (Photo by Caters News) 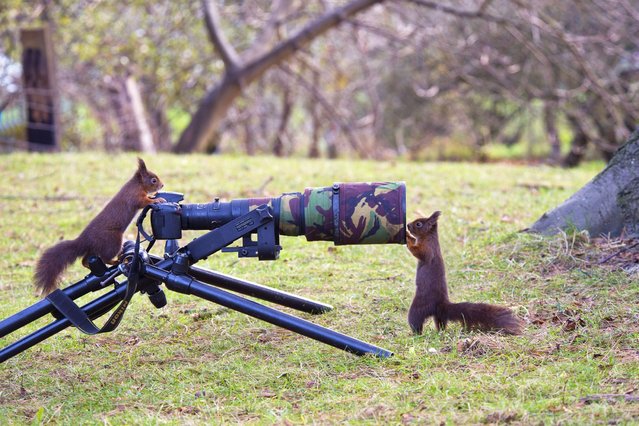 A pair of red squirrels in Formby, Merseyside. This is the moment a cheeky squirrel posed for a selfie when a photographer turned his back on his camera. And its companion obviously thought it could do a better job of taking the picture, because it got behind the lens too. Photography teacher Peter Smith was doing a photoshoot in Formby, Merseyside, to add to his portfolio of wildlife shots when the cheeky creatures gave him a surprise. (Photo by Peter Smith/PA Wire) 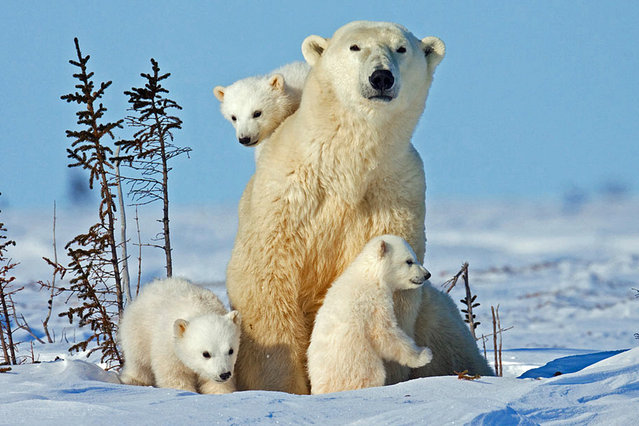 A lucky photographer has managed to photograph these adorable images that of the playful first moments in the lives of young polar bear cubs. It is believed less than 500 people have been lucky enough to witness baby polar bears when they emerge from their dens in the wild. But wildlife snapper Thomas Kokta, from Issaquah in Washington, USA, has been shooting polar bear families for the past few years carefully learning their first moves. Thomas, who travels to Manitoba, Canada, to locate these families, has witnessed not only the cuteness of baby polar bears firsthand, but also the extremely rare phenomenon of a mother bear that has given birth to surviving triplets. (Photo by Caters News Agency) 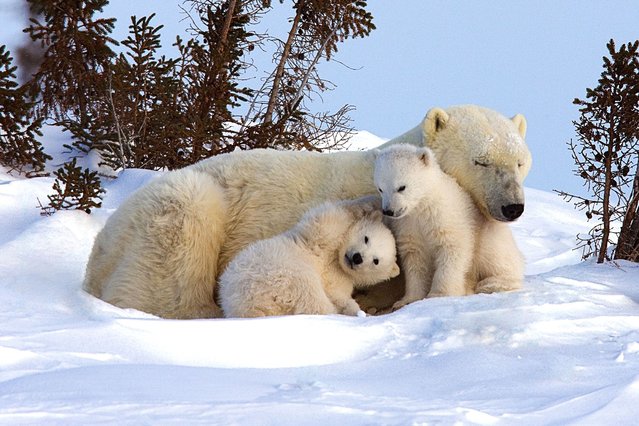 A lucky photographer has managed to photograph these adorable images that of the playful first moments in the lives of young polar bear cubs. (Photo by Caters News) 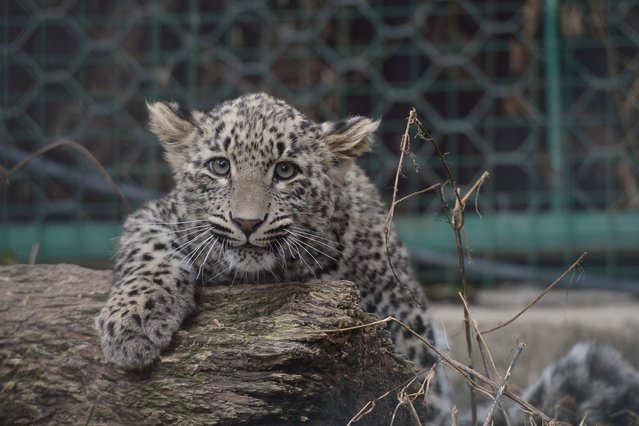 A cub at Sochi's Caucasian Leopard Breeding and Rehabilitartion Centre in the Sochi National Park. (Photo by ITAR-TASS/Barcroft Media) 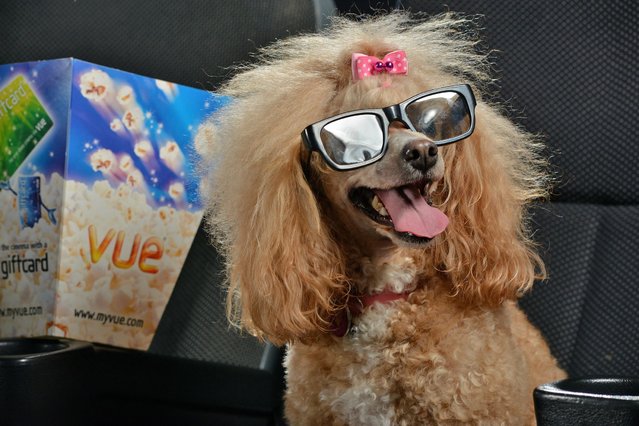 Barking mad film fanatics treated their pets to the first ever dog-friendly cinema event. Twenty dogs donned 3D glasses for a unique one-off screening of Mr Peabody & Sherman – a film about a super-intelligent talking dog. The fascinated hounds even indulged in popcorn boxes filled with doggy treats and lapped up bowls of water at Vue Entertainment in Acton, London. (Photo by Solent News & Photo Agency) 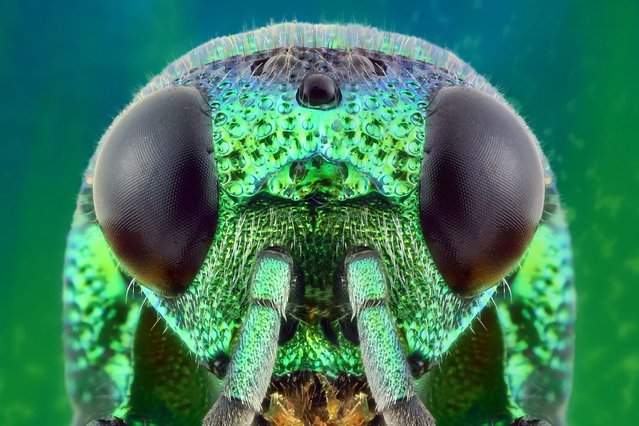 These creatures look like they have come from the latest sci-fi movie – when in fact they are actually regular beetles and horseflies. (Photo by Iwan Susanto/Solent News & Photo Agency) 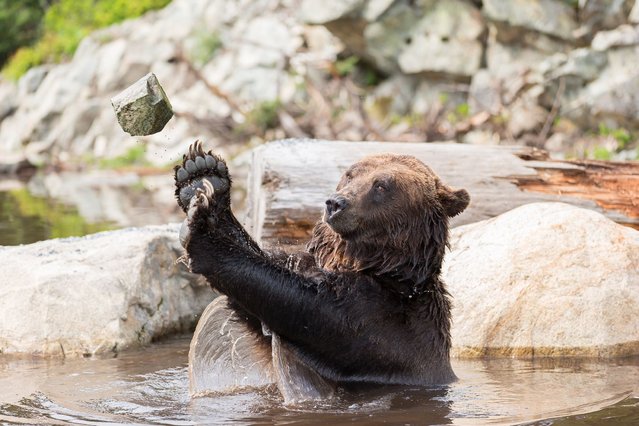 This athletic bear flexes his muscles by picking up rocks from a pond near his home – and throwing them like a shotput. The adult grizzly – named Coola – impresses conservationists with his Olympic efforts by hurling the debris several yards. Photographer Devin Manky captured the playful activity at Grouse Mountain Refuge for Endangered Wildlife, in North Vancouver, Canada. (Photo by Devin Manky/Solent News & Photo Agency) 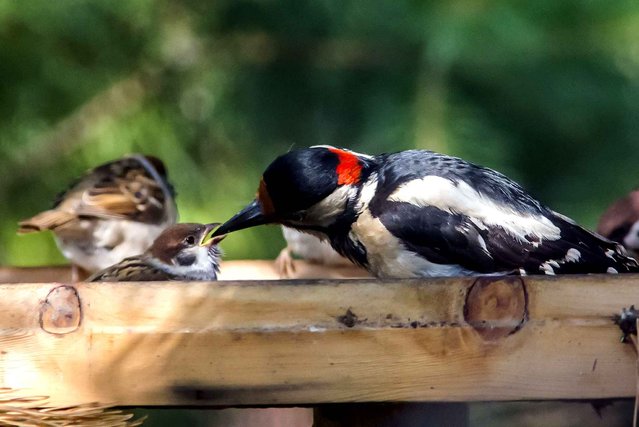 This is the adorable moment a generous woodpecker was captured sharing its food with a tiny sparrow. Spotted in the back garden of photographer Ekaterina Lashkova, 40, in Saint Petersburg, Russia, the two species were snapped happily feeding their offspring, side-by-side. But in a bizarre turn of events the CHIRPY woodpecker decided there was plenty of food to go around and is seen placing nuts and seed inside the beak of a baby sparrow. (Photo by Caters News Agency/SIPA Press) 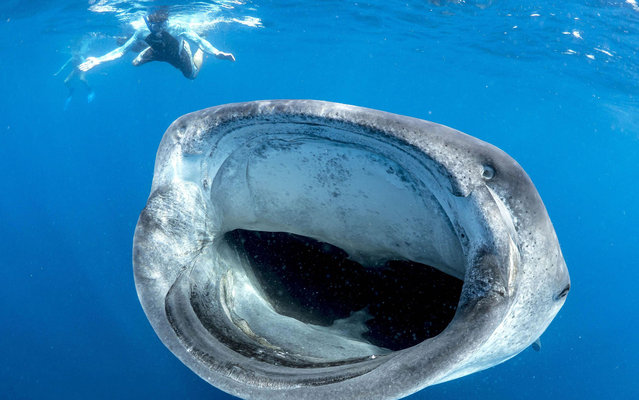 Marine biologist Simon Pierce, who studies whale sharks, happened to be in the right place at the right time to capture amazing photo off Cancun, Mexico. (Photo by Simon Pierce/Mercury Press/Caters News) 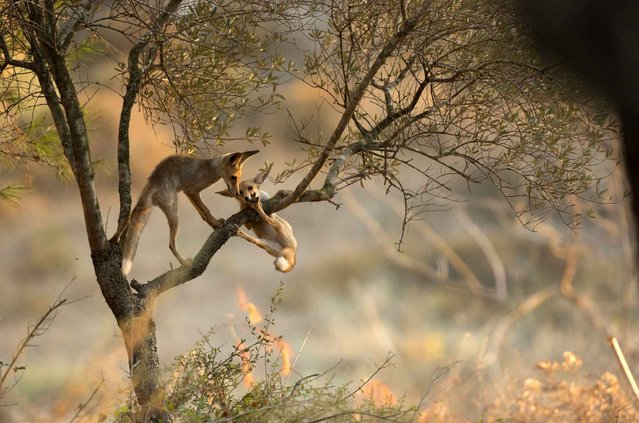 This fox seems to be doing a pull-up in a tree as it clings tightly to a branch. The fox struggles to hold its own body weight as it tries to pull itself up onto the branch. After attempting to pull itself up to safety, the animal is resigned to defeat and falls 4ft onto the ground. Software engineer Alex Geifman from Lod, Israel, travelled to the Ben Shemen Forest near Gimzo in his home country to take photographs of the foxes in the tree. (Photo by Alex Geifman/Solent News/SIPA Press)
Edit Del
09 Feb 2014 12:45:00, post received 0 comments
Publication archive:
←   →
Popular tags:
All tags
Last searches: