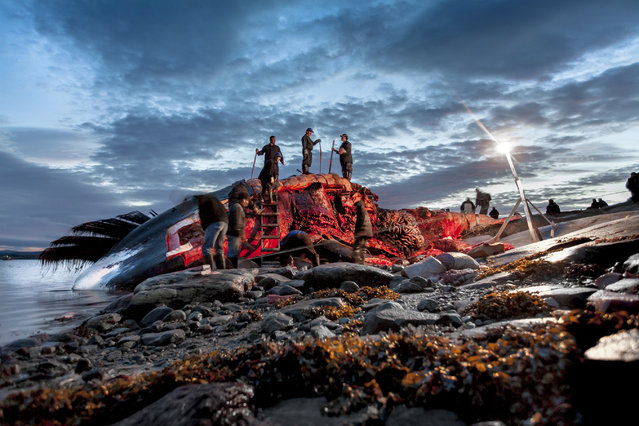 “Centuries ago, Inuit hunted the bowhead whale. At that time, whale hunting undoubtedly was part of a complex and very important ritual, if only because of the size of the catch. The position that the ancestors of today's Inuit occupied in the living world involved a relationship with the spirit that inhabited each animal but also their species”. (Photo by Robert Frechette/2014 Sony World Photography Awards) 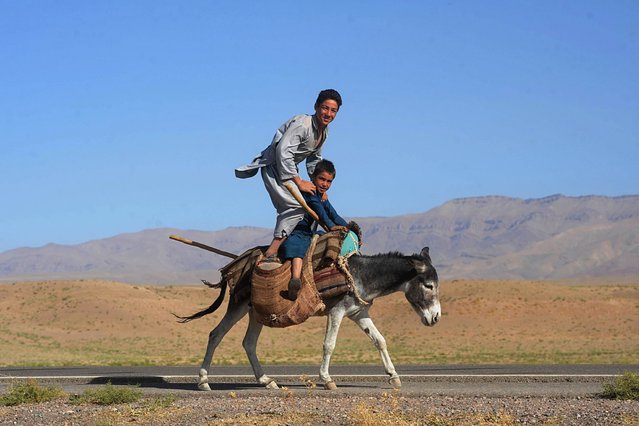 Afghan youths pose as they ride a donkey on the outskirts of Herat, on September 7, 2012. (Photo by Aref Karimi/AFP Photo) 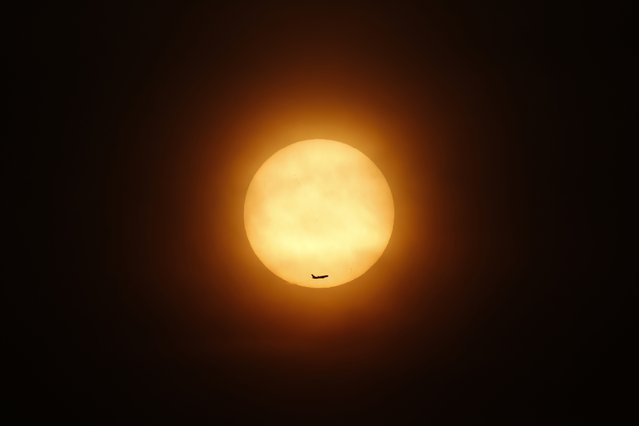 A passenger jet flies past the setting sun in Shanghai March 11, 2014. China has deployed 10 satellites to help in the massive air and sea search for a missing Malaysian airliner, the People's Liberation Army Daily said on Tuesday. (Photo by Aly Song/Reuters) 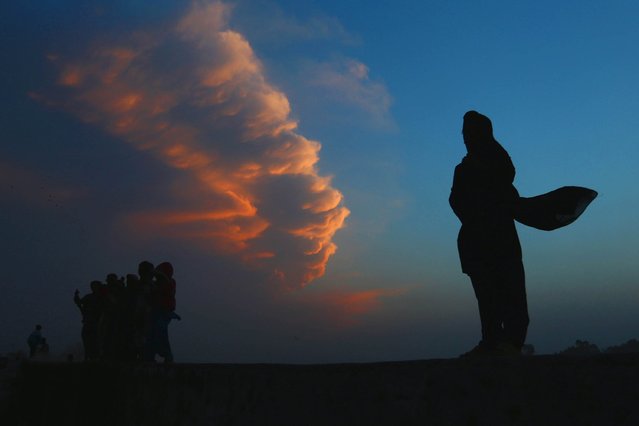 A young girl looks on as clouds build up in the sky over Lahore in the midst of windstorm which brought mounds of dust with it in Lahore, Pakistan 10 March 2014. (Photo by Rahat Dar/EPA) 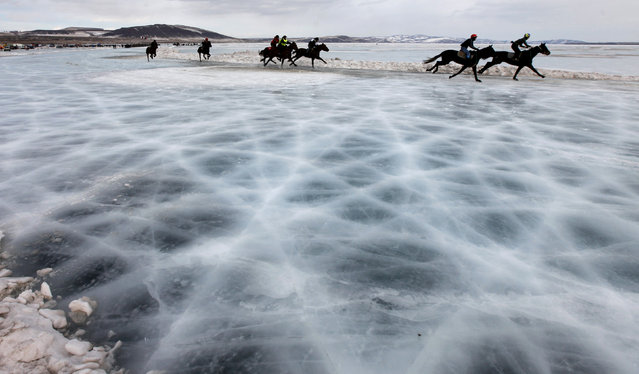 Riders compete on the frozen Yenisei River during the 44th Ice Derby amateur horse race near the settlement of Novosyolovo, some 250 km (155 miles) south of the Siberian city of Krasnoyarsk, March 15, 2014. The Ice Derby has been held in Novosyolovo annually at the end of each winter since 1969, drawing participants from the entire region. (Photo by Ilya Naymushin/Reuters) 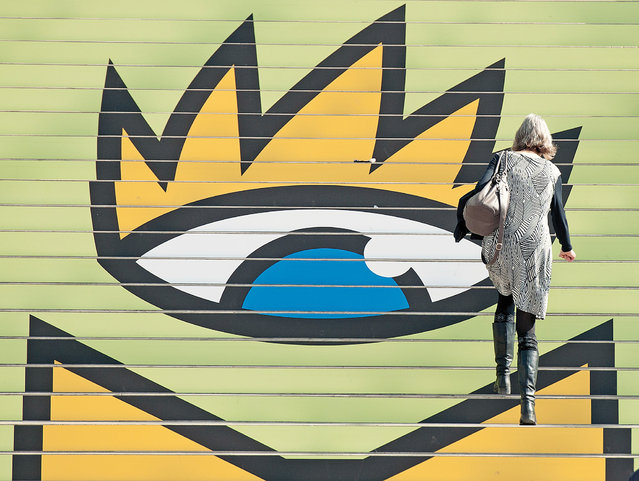 A woman takes the stairs with the logo of the Leipzig International Book Fair in Leipzig, Germany, Thursday, March 13, 2014. More than 2,000 exhibitors of 42 countries present their novelties from March 13 until March 16, 2014. (Photo by Jens Meyer/AP Photo) 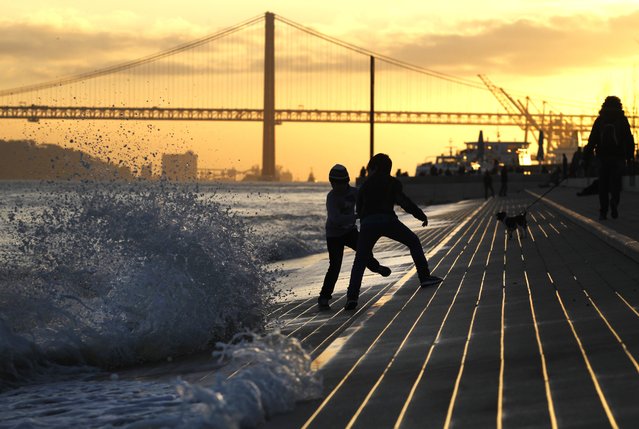 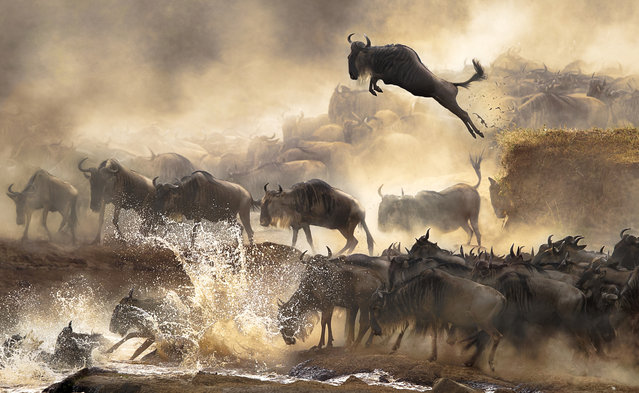 According to the photographer: “In July each year, this heart-pounding scene of wildebeests migration repeats itself in Kenya. It’s nature's most dramatic moment!” (Photo by Bonnie Cheung/2014 Sony World Photography Awards) 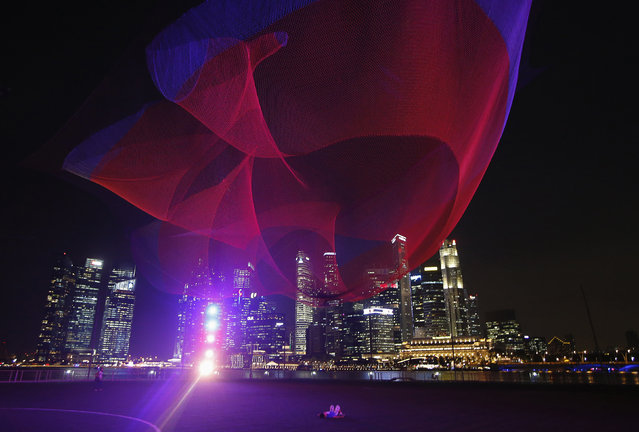 U.S. artist Janet Echelmanís luminous “1.26” installation hangs over the city skyline during a media preview of the i Light Marina Bay festival in Singapore March 6, 2014. A total of 28 groups of local and international artists took part in the biennial sustainable light art festival which will run from Friday to March 30 along the Marina Bay. (Photo by Edgar Su/Reuters) 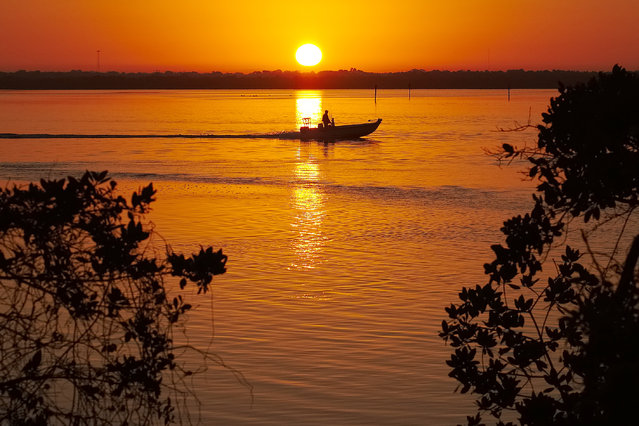 A boater cruises at sunrise near Bonita Springs, Fla., where temperatures in the area are expected to reach 80 degrees, Tuesday morning, March 4, 2014. (Photo by J. David Ake/AP Photo) 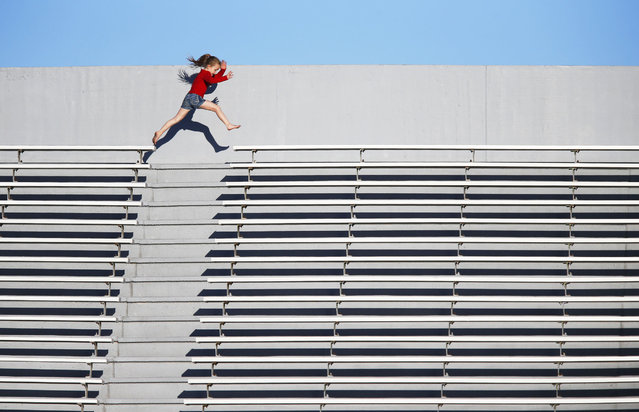 Mekenzie Blanchard, 7, of Tulsa jumps from one side of the bleachers to the other during a soccer game at S.E. Williams Stadium at Booker T. Washington High School on Monday, March 10, 2014. (Photo by Tom Gilbert/AP Photo/Tulsa World) 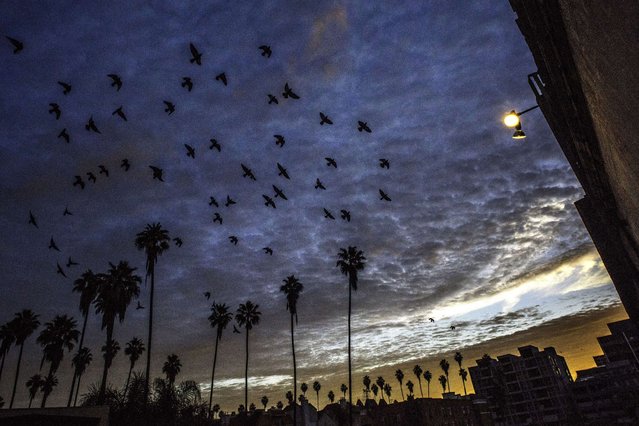 A flock of birds fly in the morning light over the Chapman Park Studio Building in Los Angeles,California on March 9, 2014. (Photo by Joe Klamar/AFP Photo) 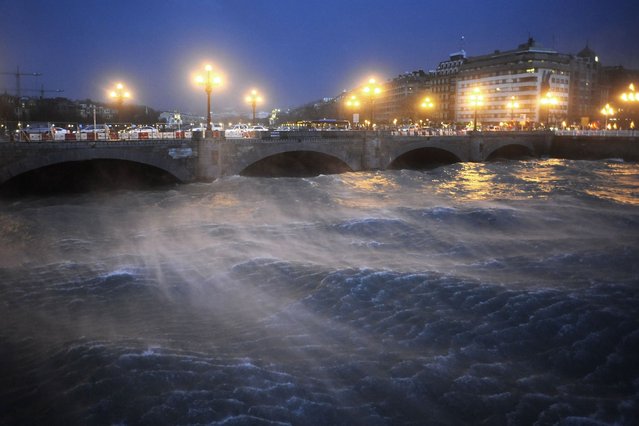 A picture taken on March 3, 2014 shows a bridge in the center of San Sebastian, northern Spain. Alerts have been issued in several regions of Spain for strong winds, heavy snowfall, avalanches and dangerous waves along the Atlantic coast. (Photo by Ander Gillenea/AFP Photo) 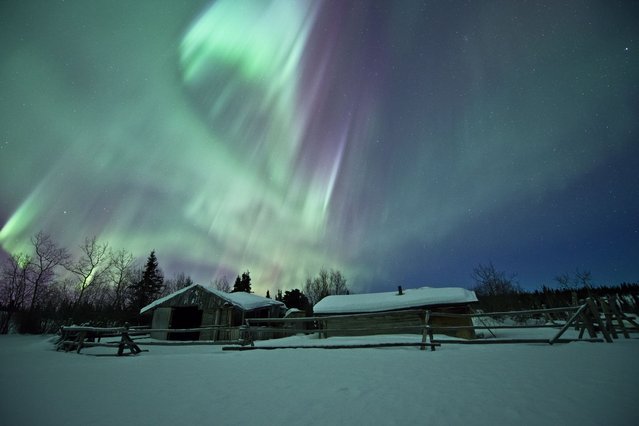 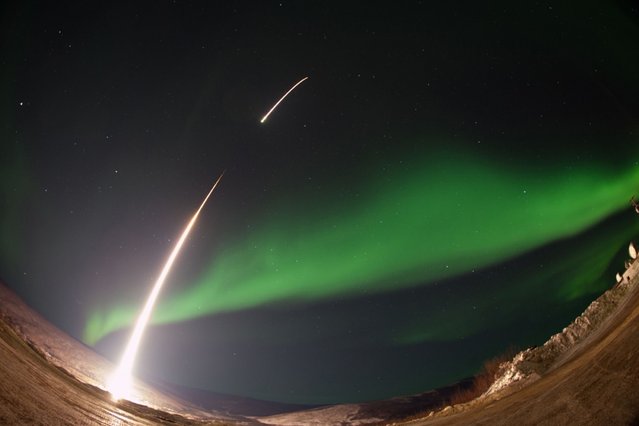 A NASA-funded sounding rocket launches into an aurora over Venetie, Alaska. (Photo by Reuters/Stringer)

Instead of going all wobbly at the sight of millions of jellyfish a scuba diver decided to take a selfie. (Photo by Caters News) 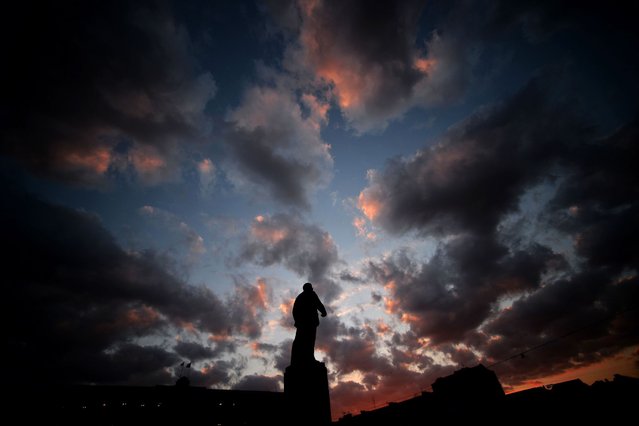 The statue of Lenin is seen at sunset on Lenin's Square in downtown Simferopol on March 12, 2014. Russia will mirror any visa sanctions the European Union imposes on its lawmakers, a senior parliamentarian said Wednesday, as Moscow and the West slug it out diplomatically over the crisis in Ukraine. (Photo by Filippo Monteforte/AFP Photo) 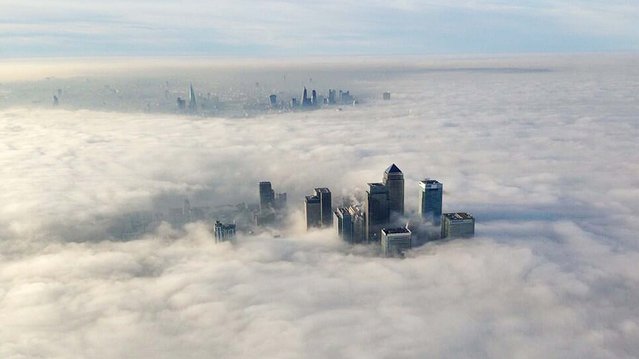 The Canary Wharf financial district (front) and central London emerge from morning fog in this aerial photograph released by the Metropolitan Police in London March 13, 2014. (Photo by Reuters/Metropolitan Police) 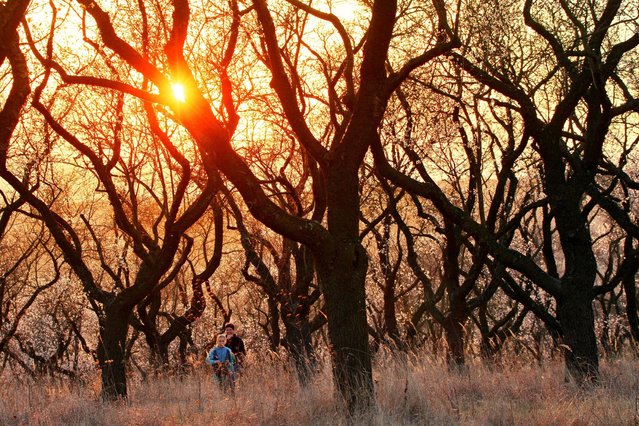 Almond trees bloom as the sun sets in Hustopece, Czech Republic on March 13, 2014. Created in the 1950s as its own source of almonds for chocolate production the plantage has several thousand trees. (Photo by Radek Mica/AFP Photo) 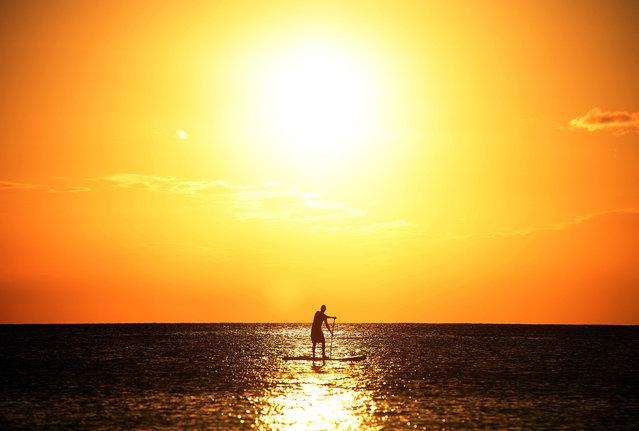 A man surf paddles near a beach as sun sets in Bridgetown on March 12, 2014. (Photo by Jewel Samad/AFP Photo) 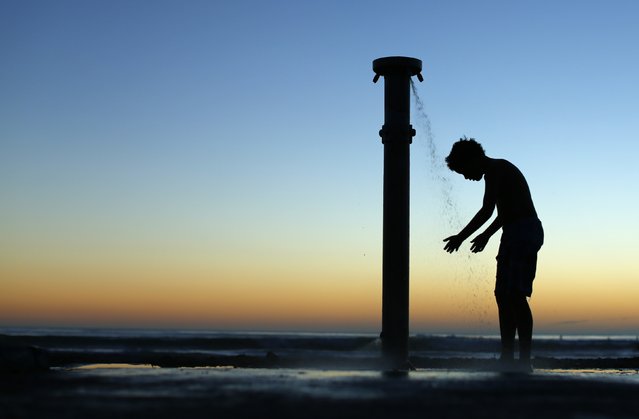 A boy showers off after sunset at the beach in Cardiff, California March 10, 2014. (Photo by Mike Blake/Reuters) 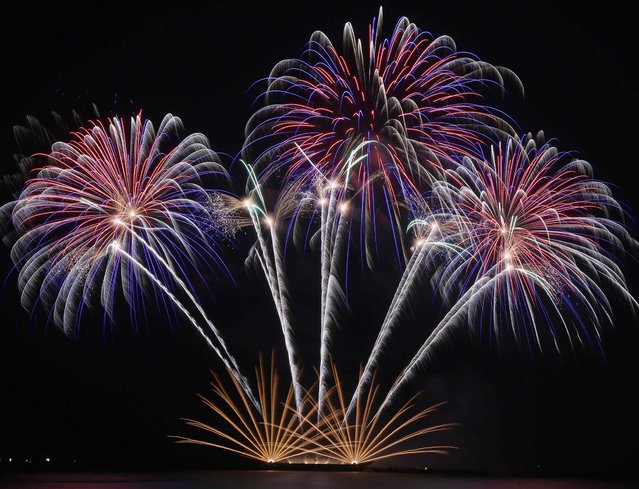 Fireworks from Germany's Vulcan Europe dot the sky on the fourth weekend of the 5th Philippine International Pyromusical Competition at the seaside Mall of Asia in suburban Pasay city, south of Manila, Philippines, on March 8, 2014. The fireworks display features competitors from China, Canada, Finland, France, Germany, Japan, Spain, the United Kingdom, the United States and the Philippines. (Photo by Bullit Marquez/Associated Press) 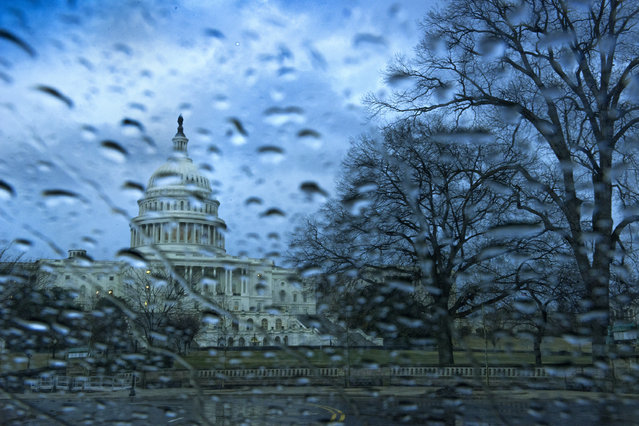 A band of rain showers move over the U.S. Capitol in Washington, DC on March 12, 2014. High's today reached the lower 70's and dropped 20 degrees by midnight in the District as rain moved into the area. Tomorrow's high is expected to be 36 degrees. (Photo by Linda Davidson/The Washington Post)
Edit Del
16 Mar 2014 08:01:00, post received 0 comments
Publication archive:
←   →
Popular tags:
All tags
Last searches: