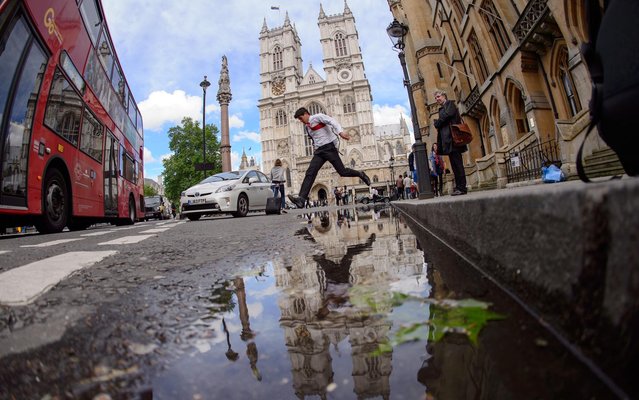 A person jumps over a wide puddle in front of Westminster Abbey following heavy rain in central London, on May 22, 2014. (Photo by Leon Neal/AFP Photo) 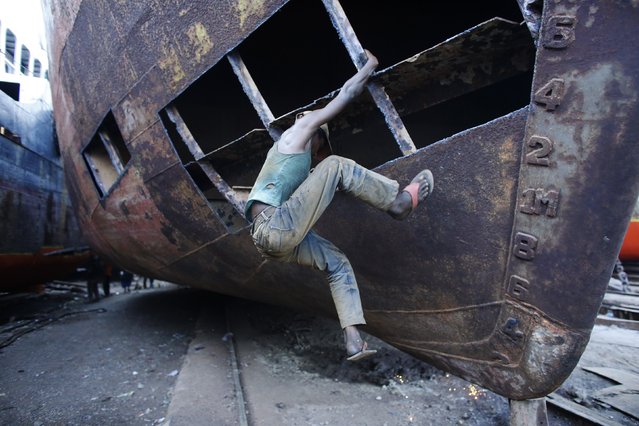 A labourer climbs out of a half-made ship as he leaves after finishing his work at a shipyard by the river Buriganga, on the outskirts of Dhaka May 19, 2014. (Photo by Andrew Biraj/Reuters) 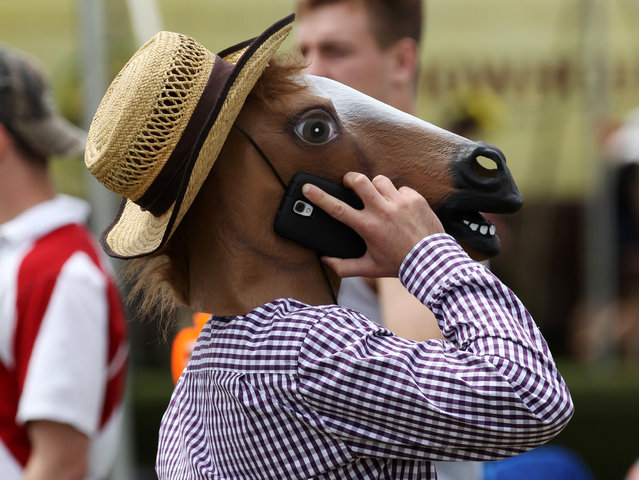 A fan in a horse mask talks on his cell phone before the 139th Preakness Stakes at Pimlico Race Course in Baltimore, MD, USA, on May 17, 2014. (Photo by Mitch Stringer/USA Today Sports) 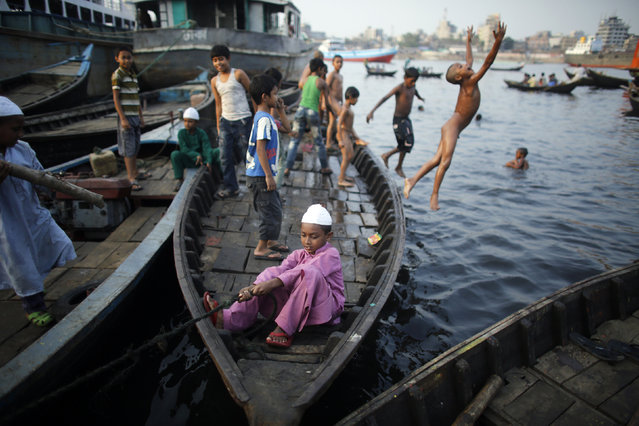 Children play at a shipyard by the river Buriganga, on the outskirts of Dhaka May 19, 2014. (Photo by Andrew Biraj/Reuters) 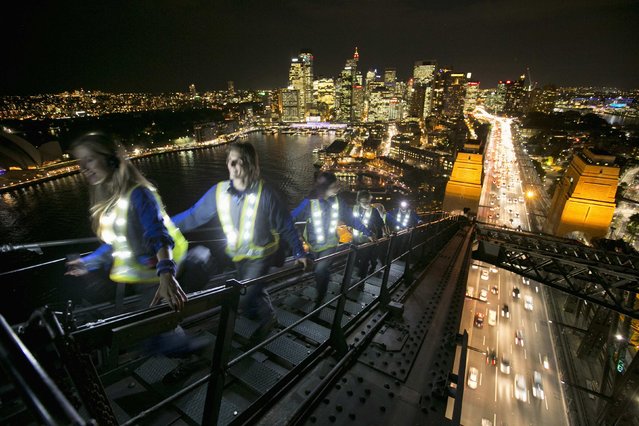 Participants wear illuminated vests as they climb the Sydney Harbour Bridge high above the city traffic during a preview of the Vivid Sydney light and music festival, on May 20, 2014. Beginning Friday, Sydney will light up at night as part of the festival, combining outdoor lighting sculptures and installations at one of the world’s largest creative industry forums. (Photo by Jason Reed/Reuters) 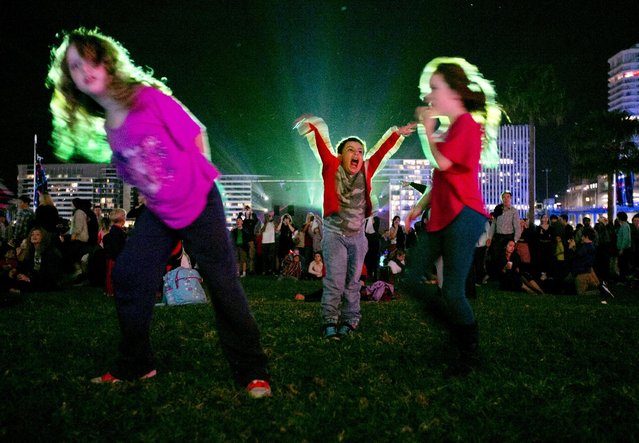 Children dance to a colourful pattern projected onto the wall of Museum of Contemporary Art on the second night of the Vivid Sydney light and music festival May 24, 2014. For 18 days beginning on Friday the Vivid Sydney festival will combine outdoor lighting sculptures and installations and is one of the world's largest creative industry forums. (Photo by Jason Reed/Reuters) 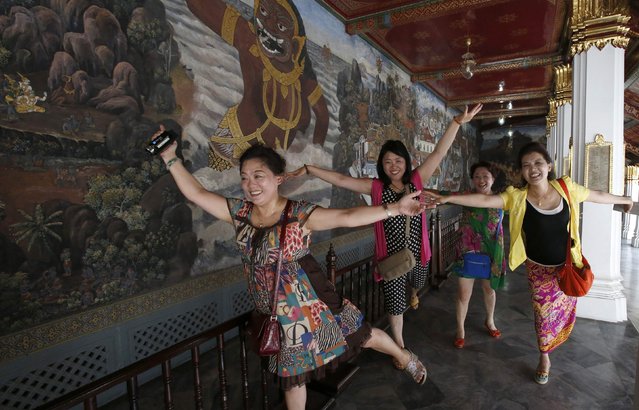 Chinese tourists pose for a picture inside the Grand Palace in Bangkok May 24, 2014. The Thai army's imposition of martial law is another blow to the country's tourist industry, adding to the economic pain from six months of destabilizing street protests as airlines cut back on flights and concern over insurance adds to travelers' worries. Tourism officials put a brave face on the latest twist in the long-running civil strife, saying it was too early to gauge the impact on tourist arrivals, which already dipped nearly 6 percent in the first three months of the year. (Photo by Erik De Castro/Reuters) 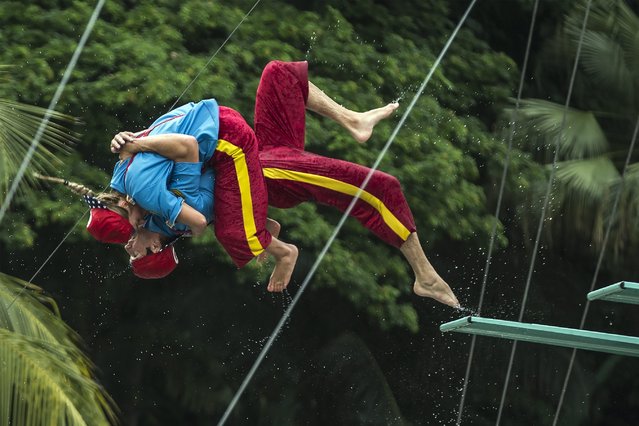 Divers for Hi-Dive show perform a jump from a springboard during a media preview of a new attraction at Sunway Lagoon theme park in Selangor, Malaysia, 20 May 2014. The show runs until 03 August 2014. (Photo by Ahmad Yusni/EPA) 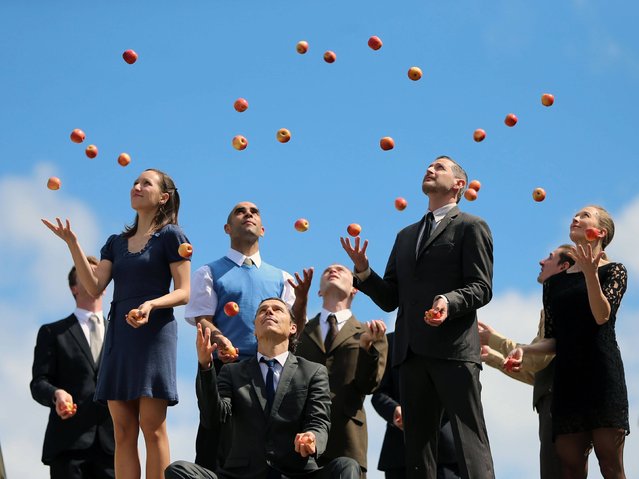 Gandini Juggling company preview the show called Smashed during a photocall for the Dublin Dance festival at the Pavilion Theatre, in Dun Laoghaire, on May 21, 2014. (Photo by Niall Carson/PA Wire) 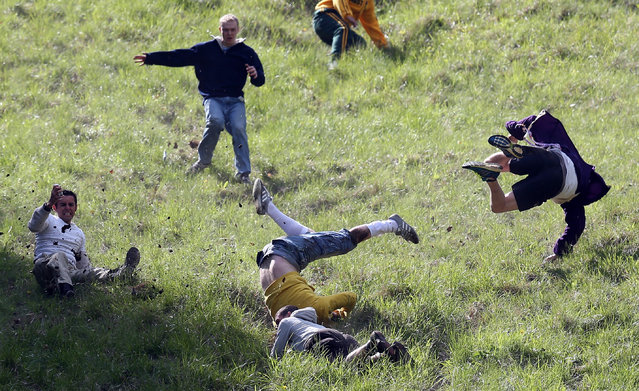 Contestants in the men's race chase a Double Gloucester Cheese down the steep gradient of Cooper's Hill during the annual Bank Holiday tradition of cheese-rolling on May 27, 2013 in Brockworth, Gloucestershire, England. Although no longer a officially organised event since 2009, thousands of spectators still gathered to watch contestants from around the world tumbling down the 200m slope, which has a 1:1 gradient in parts, in a series of races that are said to date back hundreds of years, with the winner of each receiving a cheese. Injuries such as broken arms and legs are commonplace. (Photo by Matt Cardy/Getty Images) 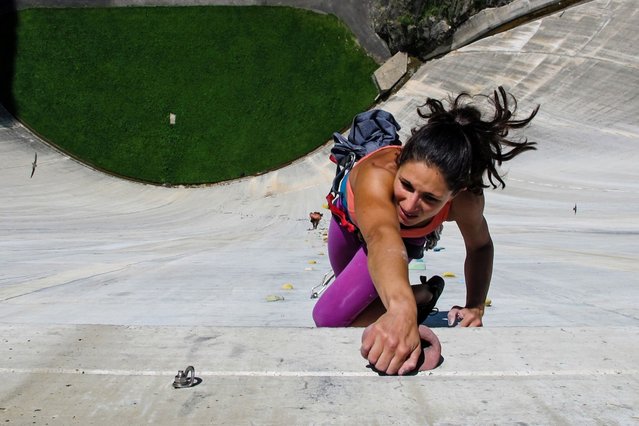 Fearless daredevils clamber up the worlds highest man-made climbing wall – running up the face of a 540ft dam. The Diga di Luzzone in Switzerland is considered by climbers as the Everest of wall climbing. (Photo by Ilana Marcus/Caters News) 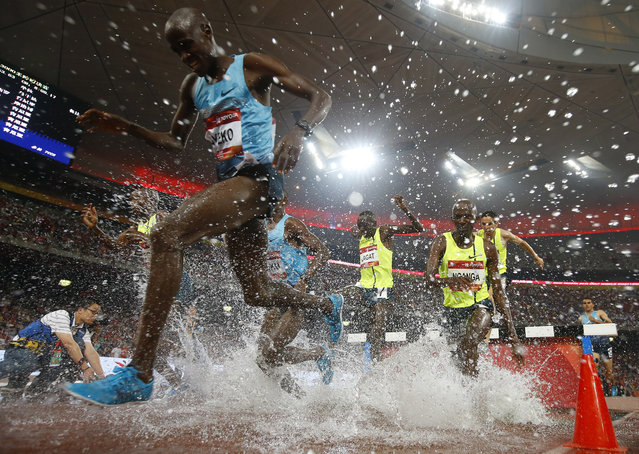 Runners compete in the men's 3000-meter steeplechase race during the 2014 IAAF World Challenge Beijing at the Bird's Nest Stadium in Beijing, China, 21 May 2014. (Photo by Rolex Dela Pena/EPA) 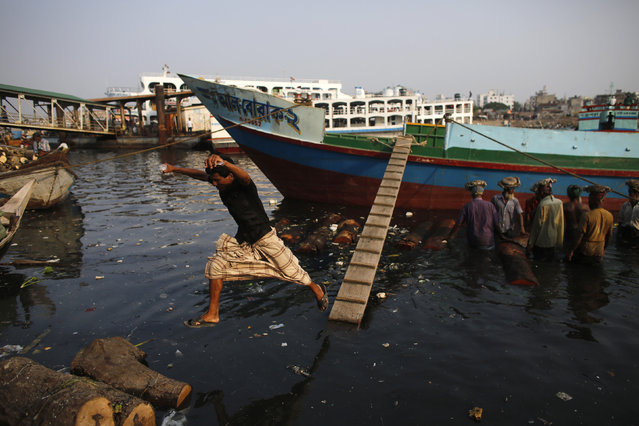 A man jumps off from a boarding ramp to a boat near a timber factory by the river Buriganga in Dhaka May 18, 2014. (Photo by Andrew Biraj/Reuters) 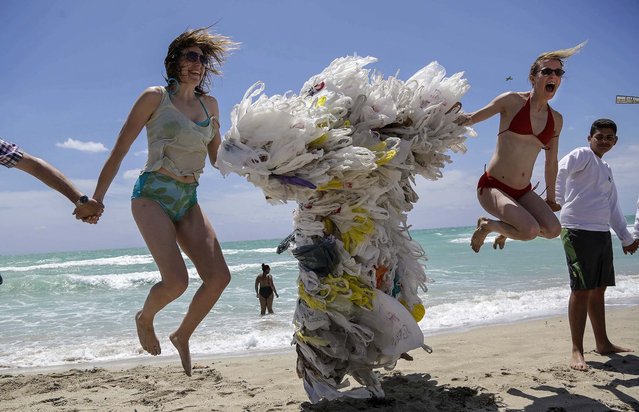 Rachel Bennett, of Brooklyn, N.Y., left, and Tiffany Threadgould, of Philadelphia, Pa., right, leap into the air as a friend takes their photograph, while joining hands with Steve Vincenti of Miami, center, who is covered with plastic shopping bags, during the Hands across the Sand protest in Miami Beach, Fla., on May 17, 2014. The protest is part of simultaneous events happening globally to raise awareness of the need to end our dependence on fossil fuels and transition to clean energy. (Photo by Lynne Sladky/Associated Press) 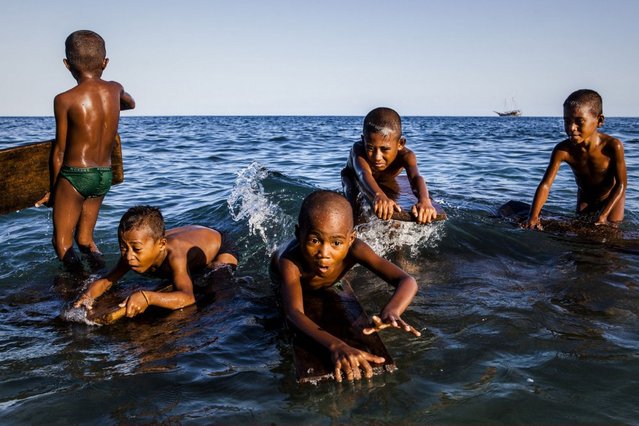 Children surf with planks of wood at Lamalera beach, Indonesia, as they celebrate the start of the whaling season. (Photo by Oscar Siagian/Getty Images) 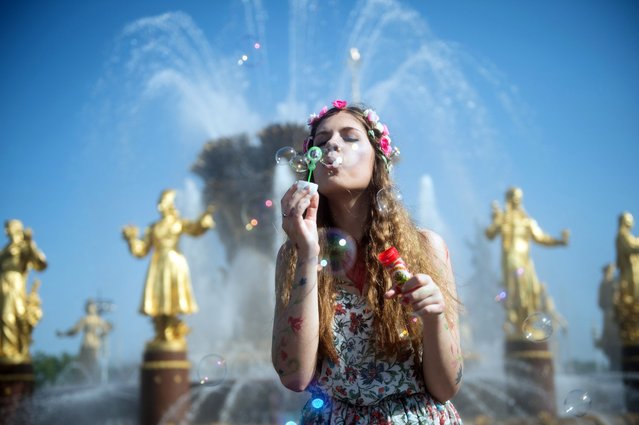 A girl blows soap bubbles during a soap bubble festival Dreamflash in Moscow on May 18, 2014. (Photo by Alexander Utkin/AFP Photo) 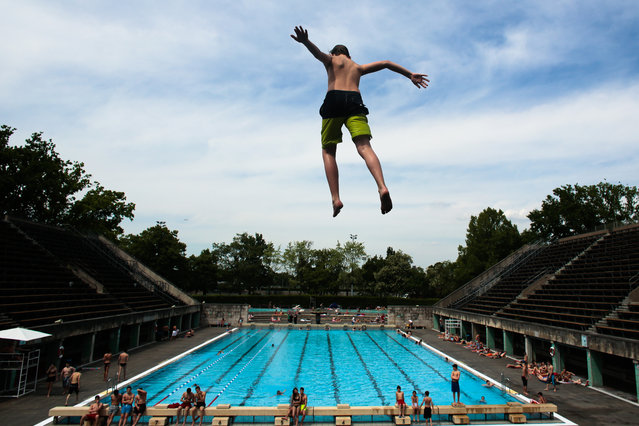 A boy jumps into the water at the Olympic open air public pool in Berlin, Germany, Wednesday, May 21, 2014. An early summer day hits the German capital with temperatures up to about 30 degrees Celsius (86 Fahrenheit). (Photo by Markus Schreiber/AP Photo) 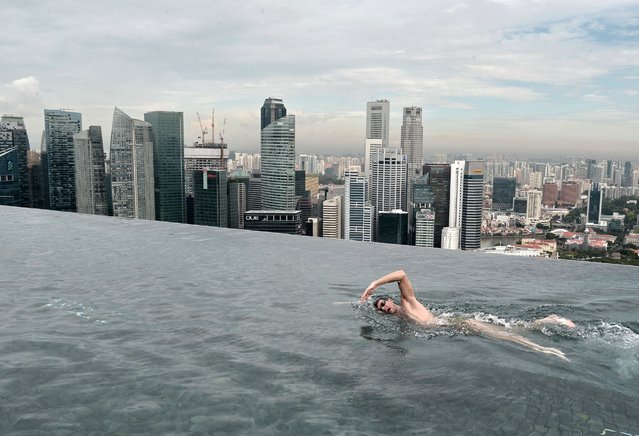 World Champion Christian Sprenger of Australia swims during a swimming clinic session for children with special needs on the rooftop pool of the Marina Bay Sands resort hotel in Singapore on May 20, 2014. Sprenger is in Singapore to promote the Singapore Swim Stars held in September, a three-day swim festival that includes an unprecedented competition format involving some of the world's best swimmers which will showcase a syncronised swimming as well as swimming clinics. (Photo by Roslan Rahman/AFP Photo) 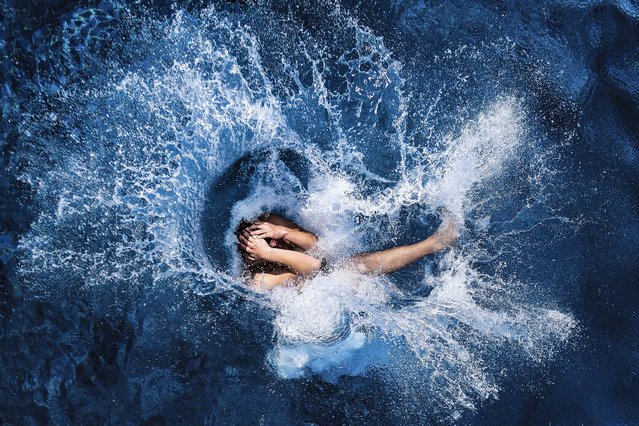 A boy dives into the water at the Olympic open air public pool in Berlin, Germany, on May 21, 2014 as the temperature rose to 87 degrees on Wednesday. (Photo by Markus Schreiber/Associated Press) 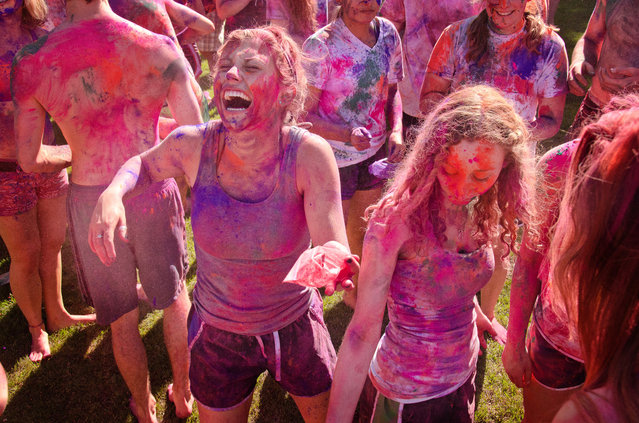 Students at Whitman College in Walla Walla, Wash., celebrate the end of the school year with a Holi Festival, on May 20, 2014. Also known as the festival of colors, Holi is a spring festival that originated as a Hindu religious event. Celebrants throw and rub colorful powders and water on each other. (Photo by Greg Lehman/Walla Walla Union-Bulletin via AP Photo)
Edit Del
27 May 2014 12:22:00, post received 0 comments
Publication archive:
←   →
Popular tags:
All tags
Last searches: