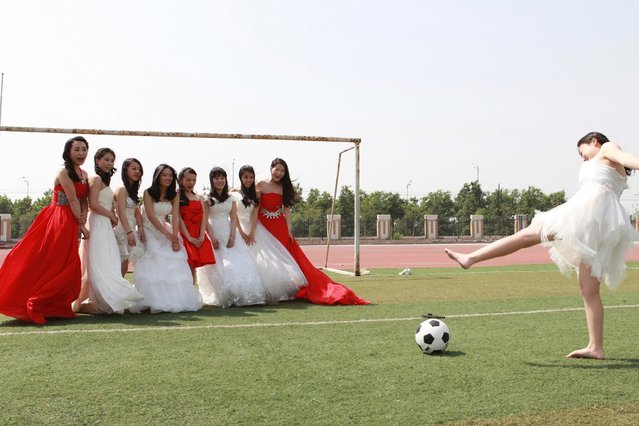 College graduates pose for a photograph with a soccer ball and a goal post on a soccer field at Yuncheng University in Yuncheng, Shanxi province. (Photo by Reuters/Stringer) 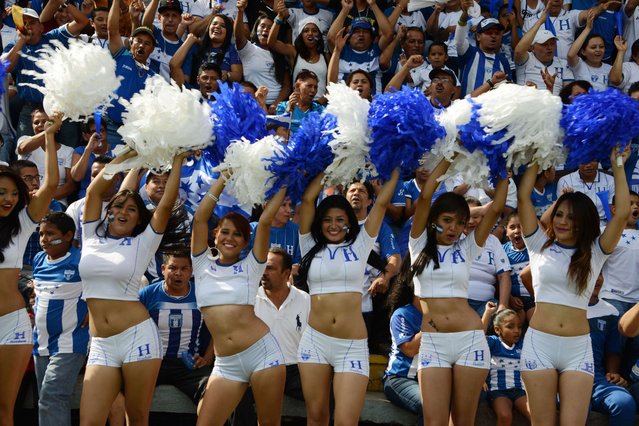 Cherrleaders perform during a program in support of the Honduran national football team in Tegucigalpa, on June 5, 2014. (Photo by Orlando Sierra/AFP Photo) 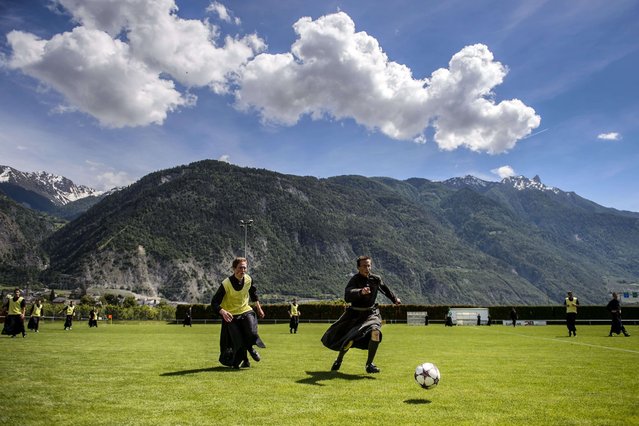 Seminarians of the International Seminary of Saint Pius X vie wearing their cassocks for the ball during a football game on May 25, 2014 in Riddes, Western Switzerland. After a whole week dedicated to prayer and study, priests and seminarians p[lay during their Sunday afternoon dedicated to sport and relaxation. (Photo by Fabrice Coffrini/AFP Photo) 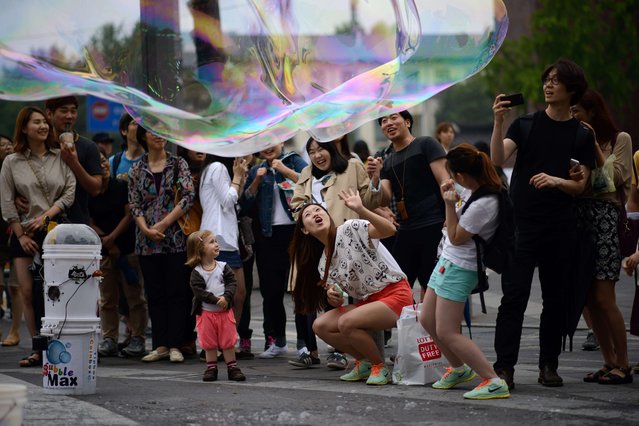 Tourists react to a large bubble created by a street performer in Seoul on June 2, 2014. The number of foreign travellers to South Korea has steadily grown over the years and topped 10 million for the first time in 2012. (Photo by Ed Jones/AFP Photo) 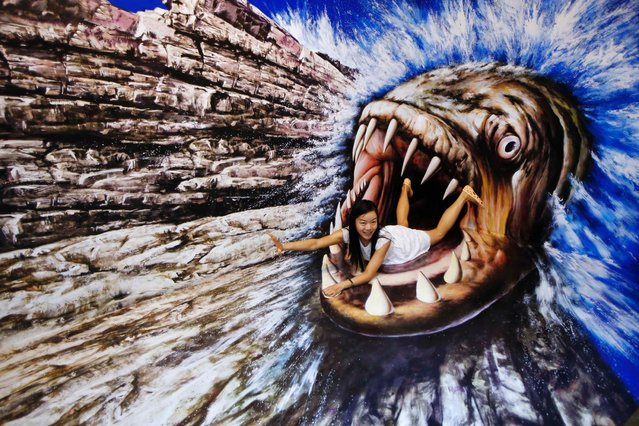 A visitor poses for photos with a 3D installation at a media preview of the Trick Eye Museum at the Resorts World Sentosa in Singapore. (Photo by Edgar Su/Reuters) 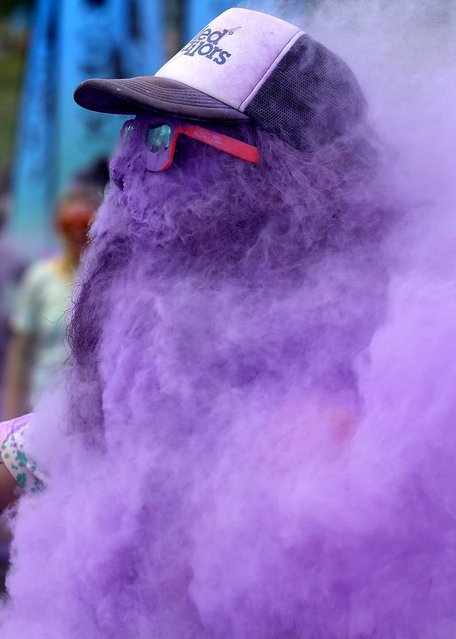 Kyle Bucklin takes part in the Color Me Rad 5km run at Ingleston in Edinburgh where the runners are blasted with bombs of different colours during the race. (Photo by Andrew Milligan/PA Wire) 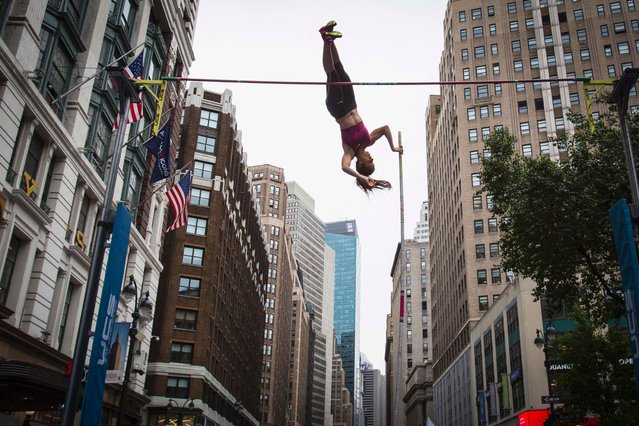 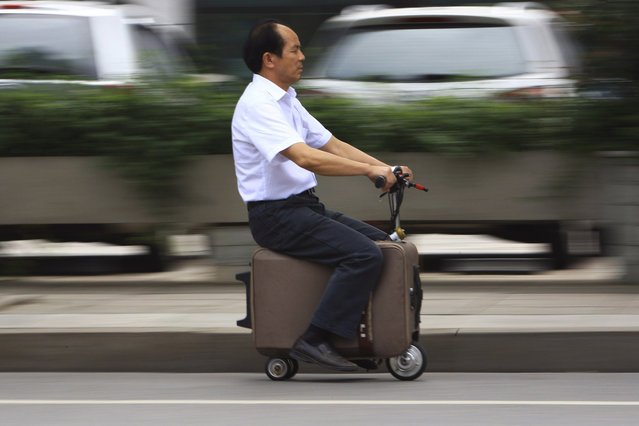 He Liang rides his home-made suitcase vehicle along a street in Changsha, Hunan province May 28, 2014. He spent 10 years modifying the suitcase into a motor-driven vehicle. The suitcase has a top speed of up to 20km/h and the power capacity to travel up to 50-60km after one charge, according to local media. (Photo by Reuters/China Daily) 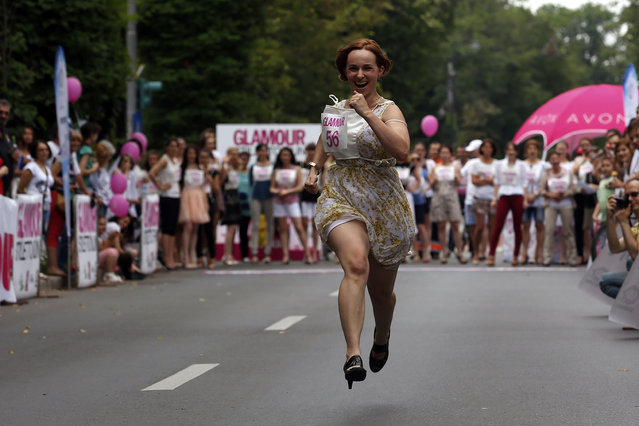 A participant runs in high-heels as she competes in the Stiletto Run in Bucharest June 14, 2014. The annual 50 metres race requires participants to wear high-heels that are at least 7cm tall. (Photo by Bogdan Cristel/Reuters) 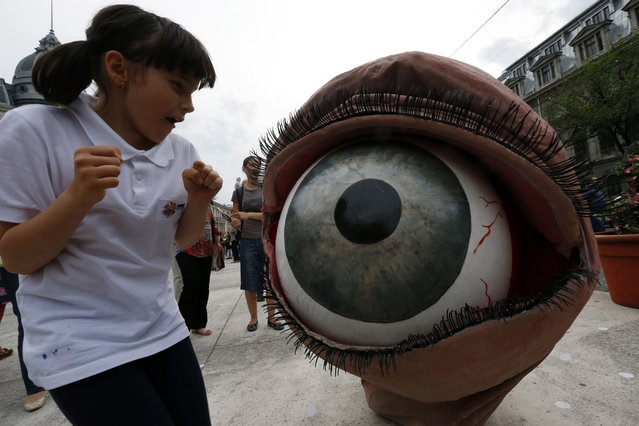 A child reacts next to an Australian actor of Snuff Puppets theatre company costumed for “Body Puppets” performance during the “B-Fit in the Street” theatre festival in downtown Bucharest May 29, 2014. (Photo by Bogdan Cristel/Reuters) 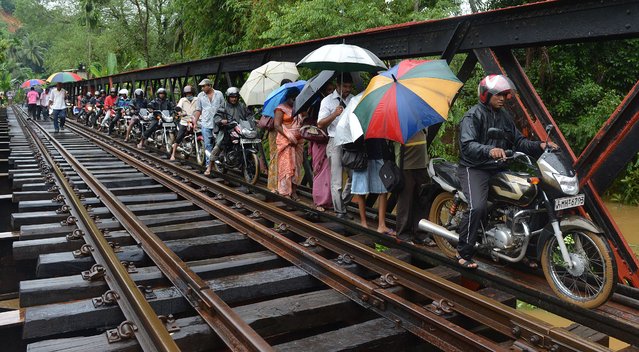 Sri Lankan flood victims cross a narrow access path along a railroad bridge in Puwakpitiya on June 3, 2014 after heavy monsoon rans caused havoc in the western, southern and central regions of the island. Official figures show that at least 18 people were killed and two more were missing after stronger than usual monsoon rains lashed the island. (Photo by Ishara S. Kodikara/AFP Photo) 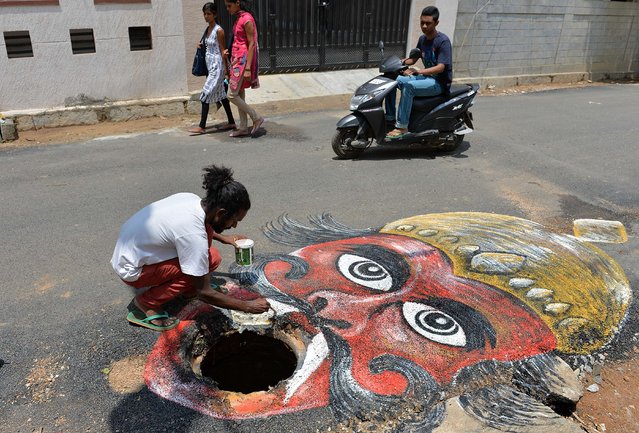 Indian artist Badal Nanjundaswamy uses the opening of an unattended manhole in the middle of a road as a canvas to depict the Hindu God of death “Yama” waiting to gobble up unwary pedestrains or motorists in Bangalore on June 6, 2014. The art installation was executed to draw the attention of the responsible municipal authorities into fixing the civic problem in an artistic way. (Photo by Manjunath Kiran/AFP Photo) 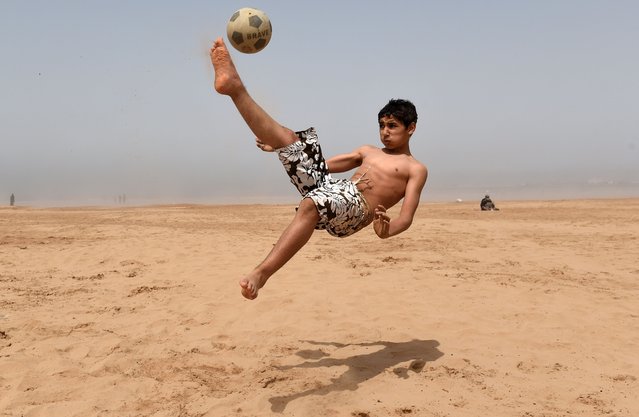 A boy controls a ball as he plays football on a beach in the western Moroccan city of Essaouira on June 13, 2014. (Photo by Fadel Senna/AFP Photo) 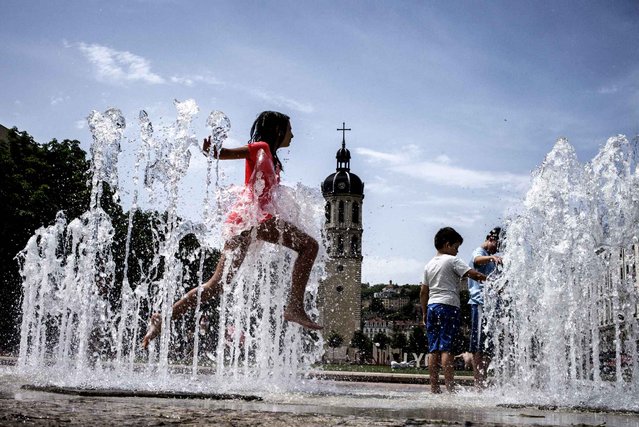 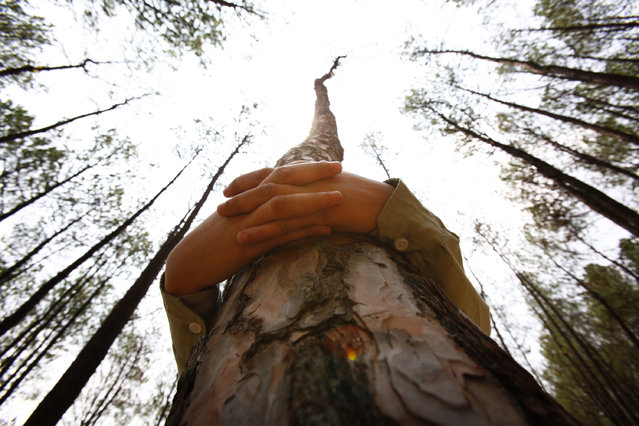 A Nepalese student hugs a tree during a mass tree hugging on the World Environment Day on the outskirts of Katmandu, Nepal, Thursday, June 5, 2014. More than 2,000 people gathered in Nepal's capital on Thursday in a bid to set a world record for the largest tree hug. (Photo by Niranjan Shrestha/AP Photo) 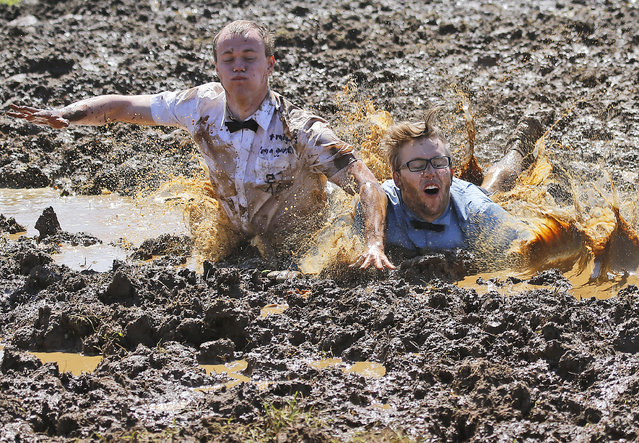 Players celebrate winning a match during the German Mud Soccer Championships in Rieste, Germany, Saturday, May 31, 2014. Some 1,000 participants from all over Germany compete in three categories, men, women and mixed for the German Championship titles. (Photo by Frank Augstein/AP Photo) 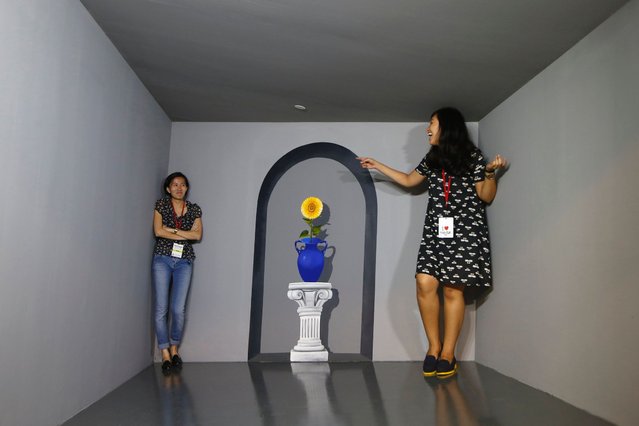 Visitor pose for photos with a 3D installation at a media preview of the Trick Eye Museum at the Resorts World Sentosa in Singapore. (Photo by Edgar Su/Reuters) 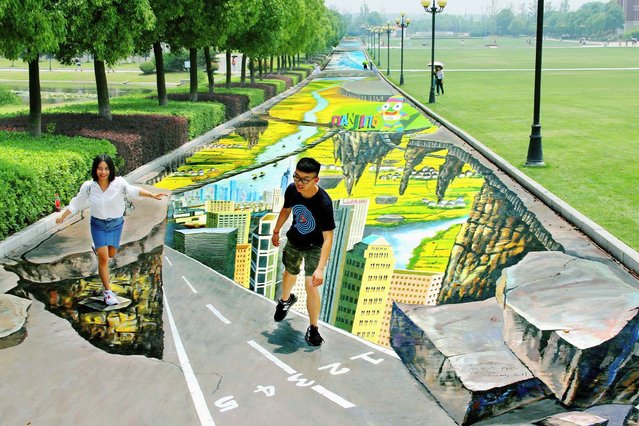 College students pose for pictures with a 3D painting along a street at a campus in Nanjing, Jiangsu province. (Photo by Reuters/China Daily) 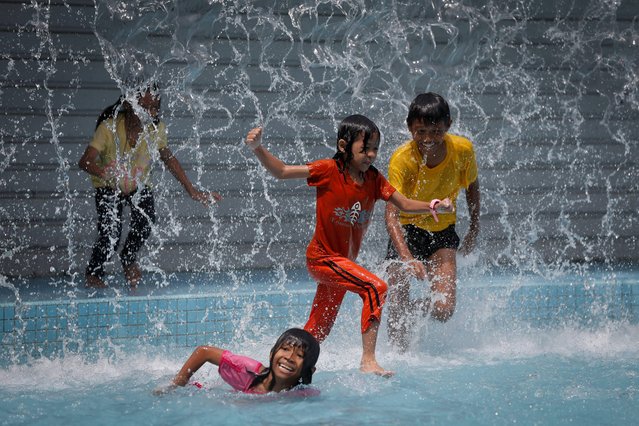 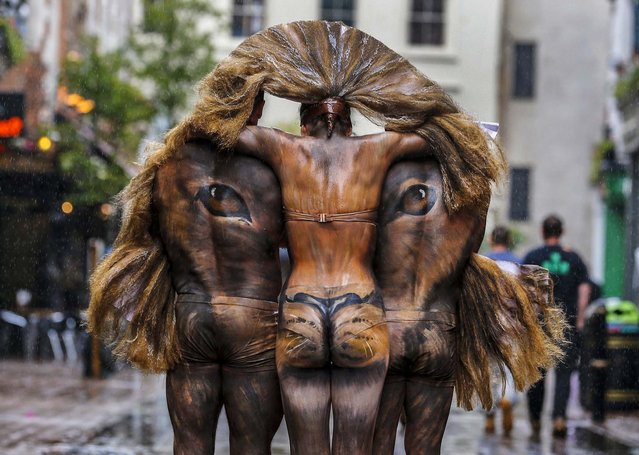 Hand-painted models depicting a lion's head, pose for photographers during a photo-op in central London's Carnaby Street, on June 3, 2014. It was part of events marking the opening of the Zoological Society of London's first ever pop-up shop on the famous street, part of the Lions400 campaign to expose the plight of the endangered Asian lion. (Photo by Lefteris Pitarakis/Associated Press) 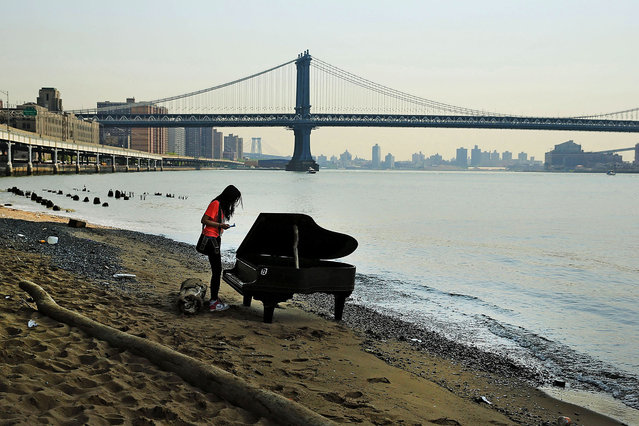 A woman inspects a piano underneath the Brooklyn Bridge in New York City (The Manhattan bridge is seen in the background), on June 3, 2014. A grand piano that mysteriously landed on a sliver of beach under the iconic bridge last week has become an impromptu tourist attraction. While the Mason & Hamlin piano is badly damaged, dozens of people climb onto the beach daily to test out the keys. (Photo by Spencer Platt/Getty Images) 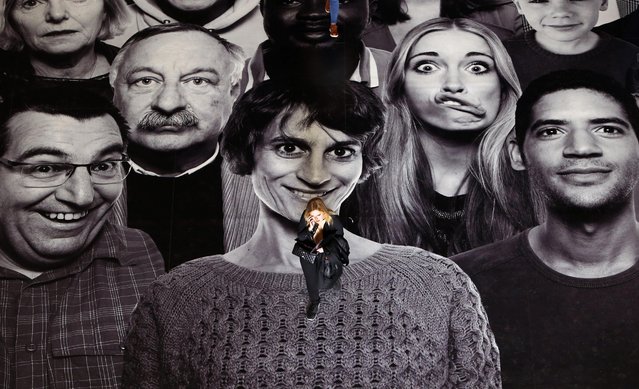 A woman walks on giant portraits by French street artist and photographer during the presentation of his creation at the Pantheon in Paris, on June 3, 2014. (Photo by Francois Mori/Associated Press)
Edit Del
16 Jun 2014 12:12:00, post received 0 comments
Publication archive:
←   →
Popular tags:
All tags
Last searches: