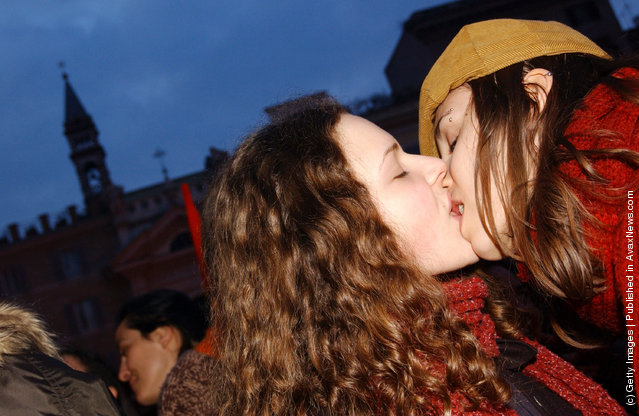 Couples take part in a Valentine's Day attempt to break the record for the world's largest simultaneous gay kiss on February 14, 2004 in Rome, Italy. (Photo by Franco Origlia/Getty Images) 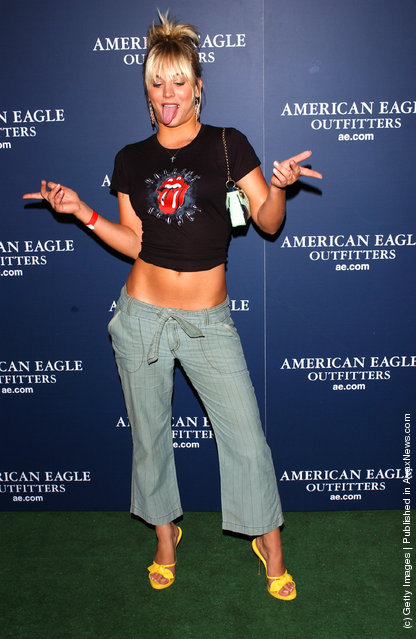 Actress Kaley Cuoco attends AE Jeans Will Rock You Campaign at the Ivar on August 24, 2004 in Hollywood, California. (Photo by Stephen Shugerman/Getty Images)

A Mercedes-Benz bionic concept vehicle lies on display during an innovation symposium at the Washington Convention Center June 7, 2005 in Washington, DC. The car was created after a study was done on the tropical boxfish. (Photo by Alex Wong/Getty Images) 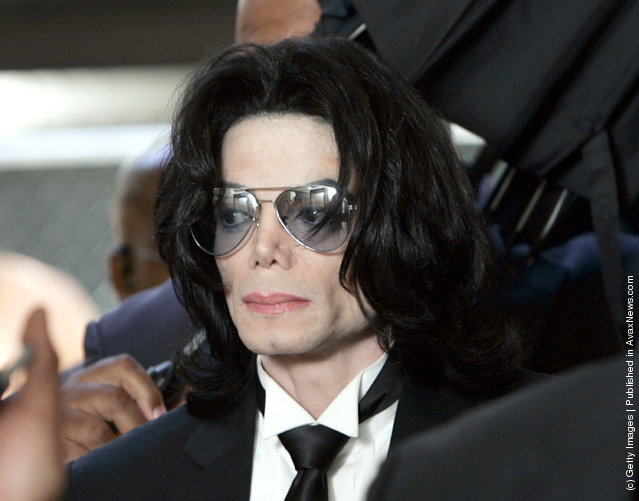 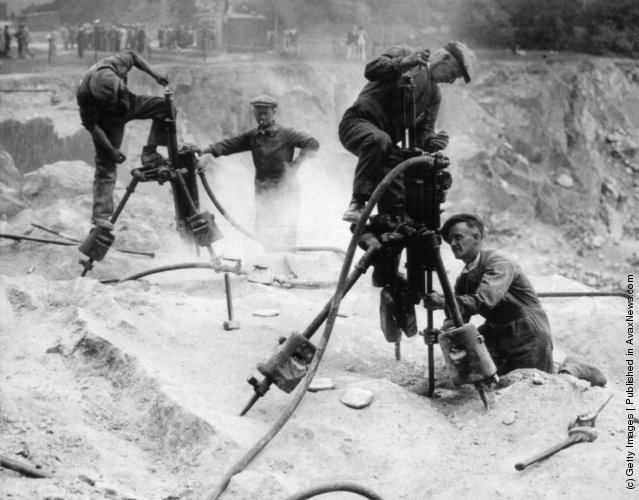 Quarrymen from all over Britain come to Whitwick Quarries in Leicestershire for the annual inter-quarry competitions. Here rock drilling is practised as a sport, and the contestants compete to drill the deepest hole in the space of half an hour. (Photo by Fox Photos/Getty Images). UK, 1937 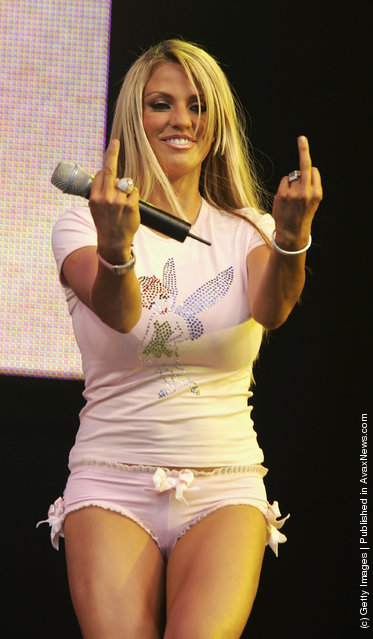 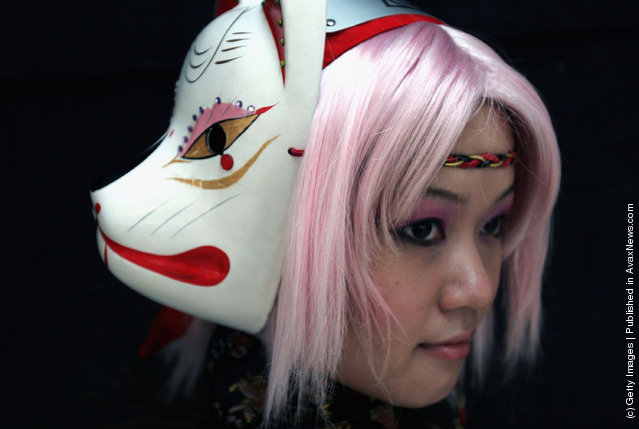 A Chinese girl dressed as a cartoon figure performs at a Cosplay Show during the Guangdong Cartoon Art Festival on August 13, 2005 in Guangzhou of Guangdong Province, China. Cosplay, a term for “Costume-Play” originated from Japanese culture, in which cartoon fans act their favourite characters, has become increasingly popular among Chinese teenagers. According to state media, China has a population of 370 million children and young people, making up a huge audience for animation. Currently, 90 percent of the market is dominated by foreign producers from Japan and the US. (Photo by China Photos/Getty Images) 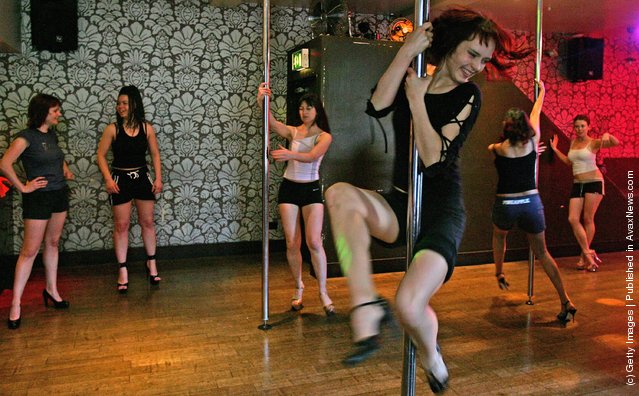 Women perform pole tricks during a Polepeople pole dancing class May 3, 2006 in London, England. Since celebrities hailed pole dancing as the latest alternative to aerobics or yoga pole dancing has taken the United Kingdom by storm and has become the latest trend for females getting fit. The classes provide women with the opportunity to develop their upper-body strength and add sparkle to their s*x life, while enjoying a female-only atmosphere which they find less regimented than traditional gym sessions. (Photo by Scott Barbour/Getty Images) 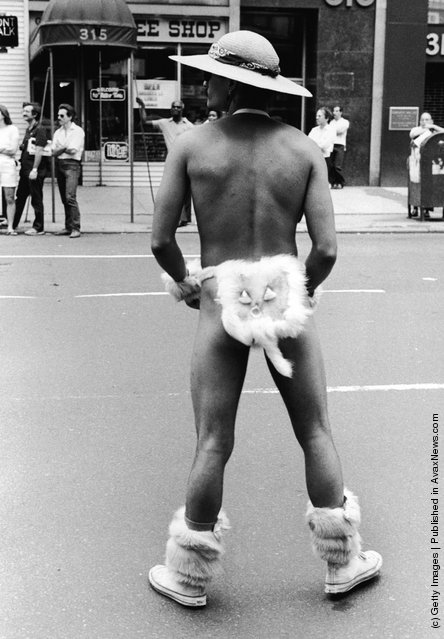 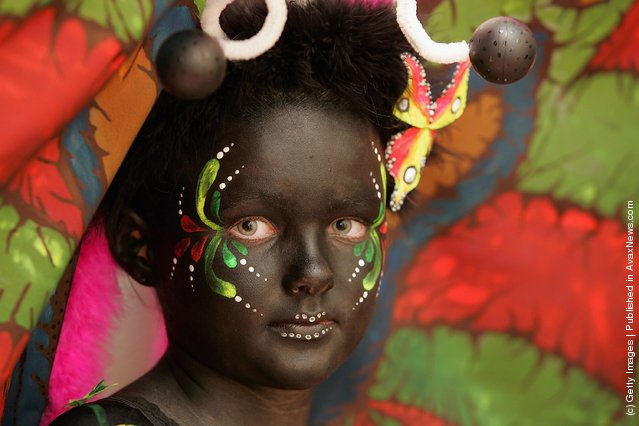 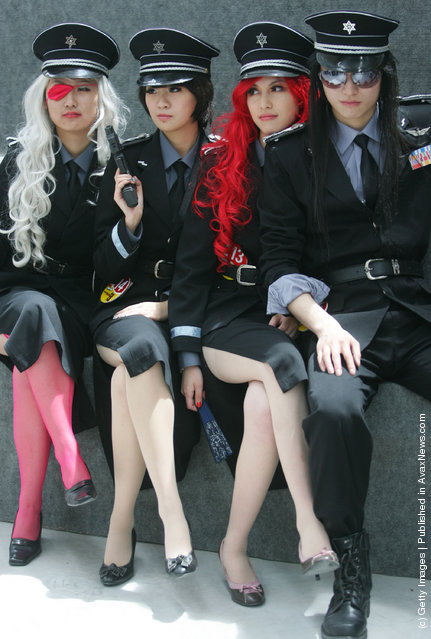 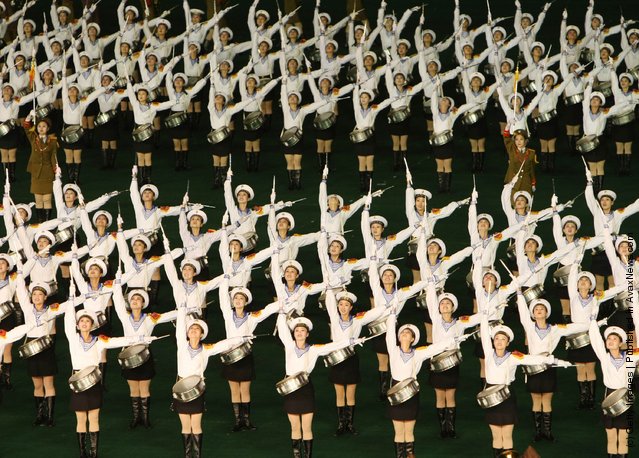 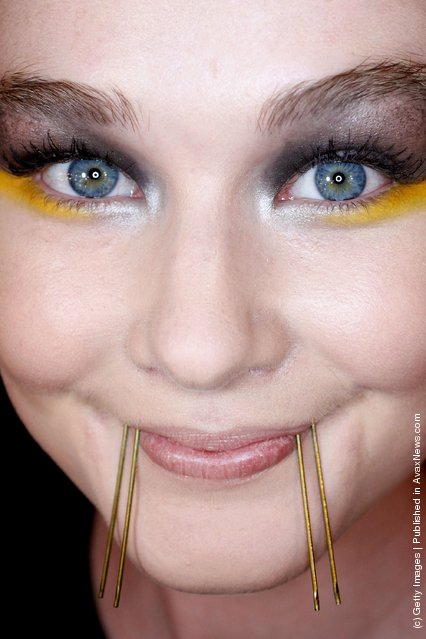 A model poses backstage ahead of the Alistair Trung show during Rosemount Australian Fashion Week Spring/Summer 2011/12 at Overseas Passenger Terminal on May 5, 2011 in Sydney, Australia. (Photo by Jennifer Polixenni Brankin/Getty Images) 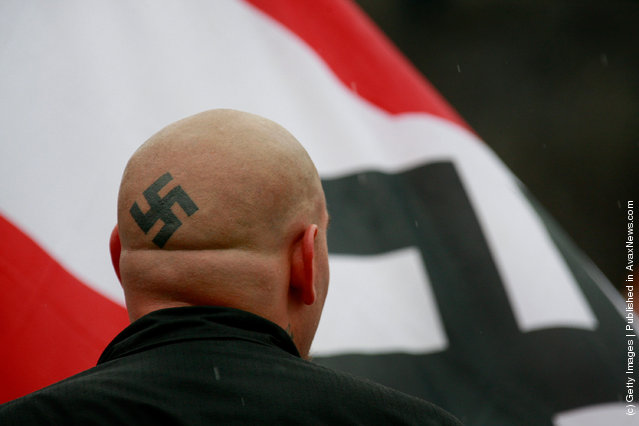 Neo-Nazi protestors organized by the National Socialist Movement demonstrate near where the grand opening ceremonies were held for the Illinois Holocaust Museum & Education Center April 19, 2009 in Skokie, Illinois. (Photo by Scott Olson/Getty Images) 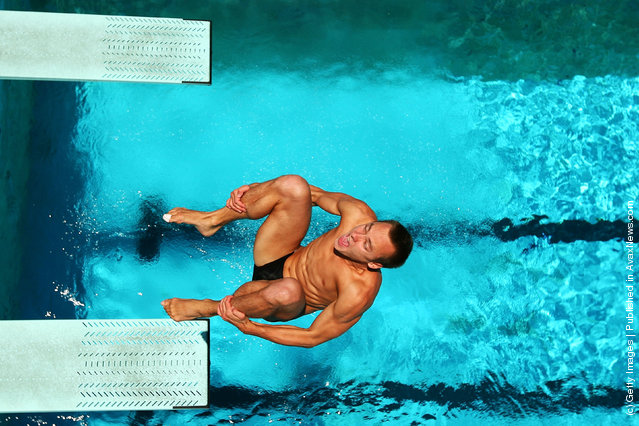 Reuben Ross of Canada dives during the Mens Three Meter Semi Finals at the Fort Lauderdale Aquatic Center during Day 1 of the AT&T USA Diving Grand Prix on May 7, 2009 in Fort Lauderdale, Florida (Photo by Al Bello/Getty Images) 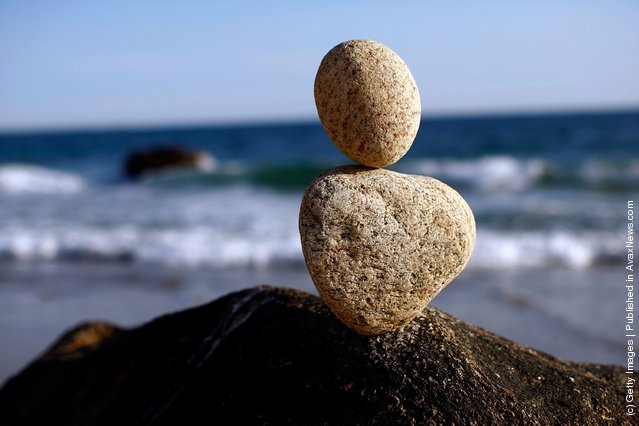 Two rocks balance upon a large stone at the Gay Head beach August 7, 2009 in Aquinnah, Massachusetts on the island of Martha's Vineyard. (Photo by Win McNamee/Getty Images) 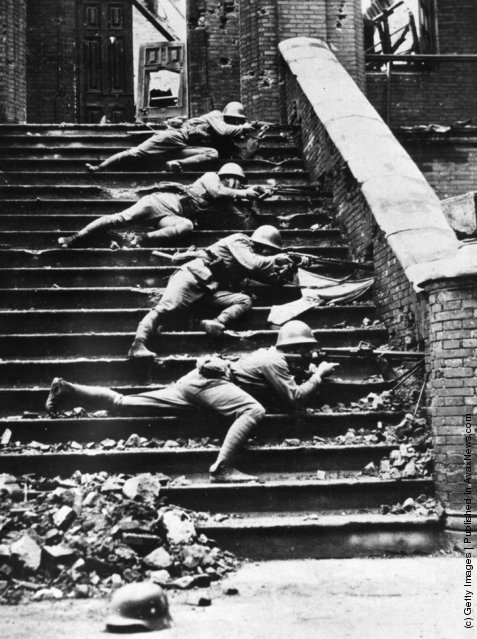 Japanese infantry in Chapei, Shanghai, firing through holes in a brick wall at Chinese positions during the Sino-Japanese War. (Photo by Keystone/Getty Images). 1937 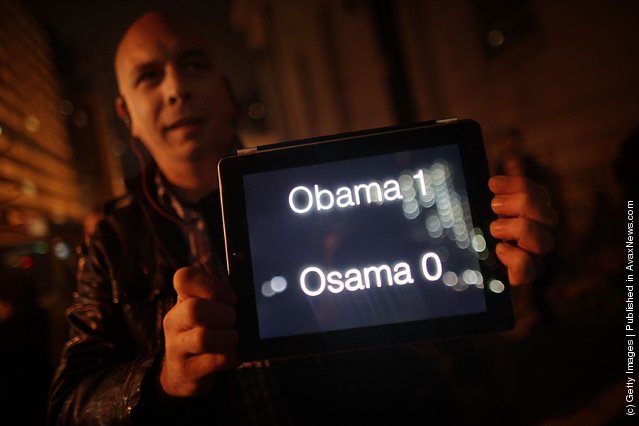 A man holds up a scoreboard on his ipad displaying Obama – one, Osama – nil, as thousands of people celebrate in the streets at Ground Zero, the site of the World Trade Centre, waving American flags and honking horns to celebrate the death of al Qaeda founder and leader Osama bin Laden on May 1, 2011 in New York City. President Barack Obama announced the death of Osama bin Laden during an address to the nation from the White House in Washington. The mastermind of the September 11 terrorist attacks was killed in an American military operation at a compound in Pakistan. (Photo by Spencer Platt/Getty Images) 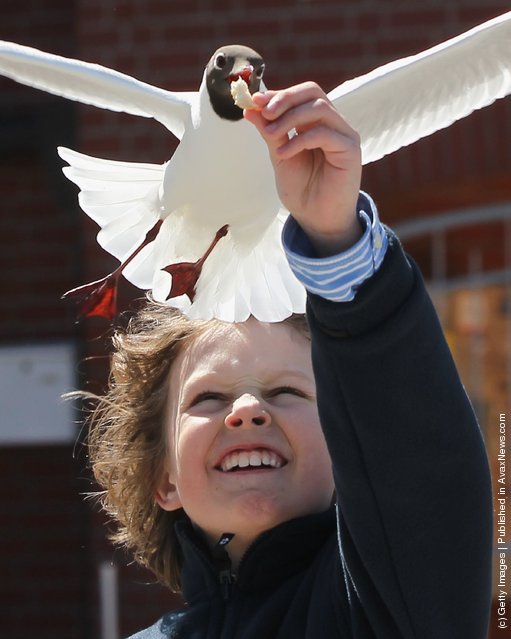 A little boy takes delight in feeding seagulls near the beach at the Baltic Sea on May 2, 2011 in Zingst, Germany. A cold wind made for choppy waves under a blue sky on the north German coast today. (Photo by Sean Gallup/Getty Images) 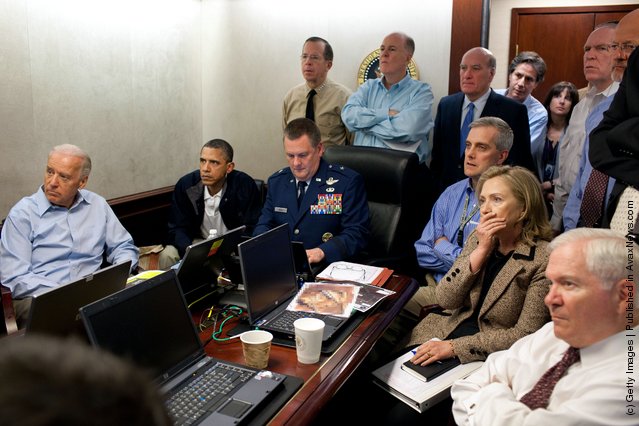 In this handout image provided by The White House, President Barack Obama, Vice President Joe Biden, Secretary of State Hillary Clinton and members of the national security team receive an update on the mission against Osama bin Laden in the Situation Room of the White House May 1, 2011 in Washington, DC. Obama later announced that the United States had killed Bin Laden in an operation led by U.S. Special Forces at a compound in Abbottabad, Pakistan. (Photo by Pete Souza/The White House via Getty Images) 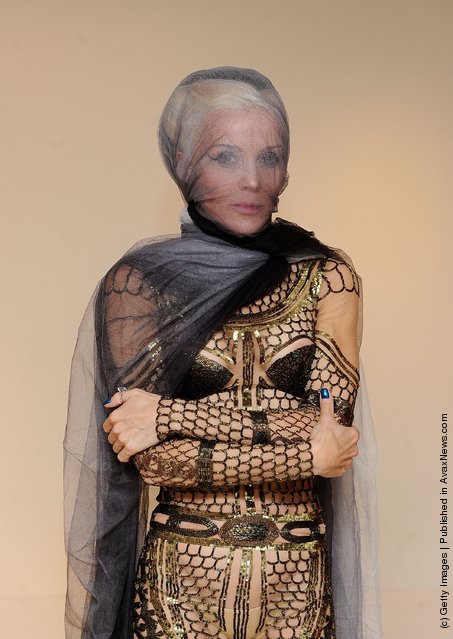 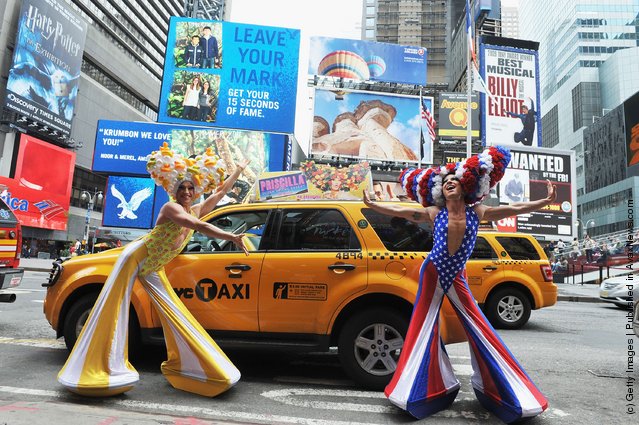 Cast members Jeff Metzler and Bryan West of Broadway's “Priscilla Queen Of The Desert” attend the unveiling of the 3-D New York Taxi Tops at Palace Theatre on May 2, 2011 in New York City. (Photo by Slaven Vlasic/Getty Images) 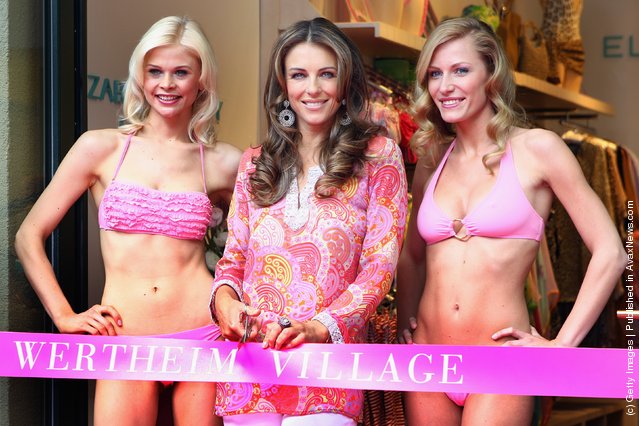 Elizabeth Hurley (C) poses with two models in bikinis during the opening of the Elizabeth Hurley Beach Boutique at Wertheim Village Outlet Center on May 3, 2011 in Wertheim, Germany. (Photo by Alex Grimm/Getty Images) 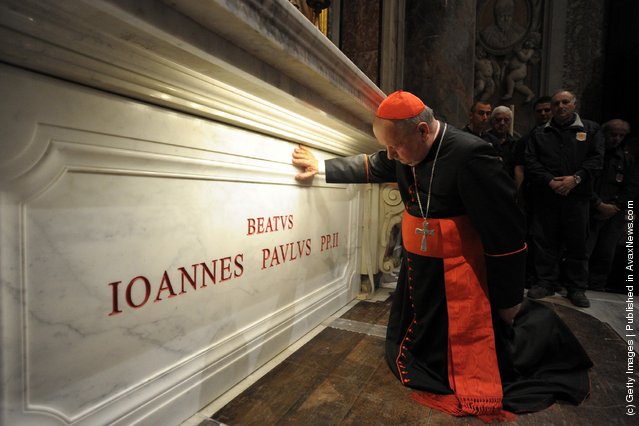 Cardinal Stanislav Dziwisz, Archbishop of Krakow and former personal secretary of Pope John Paul II, prays in front of the Tomb of new blessed John Paul II at the St. Peter's Basilica on May 3, 2011 in Vatican City, Vatican. The body of John Paul II was moved to the new resting place, near Michelangelo's 'The Pieta' statue, after a lavish beatification ceremony. (Photo by L'Osservatore Romano - Vatican Pool via Getty Images) 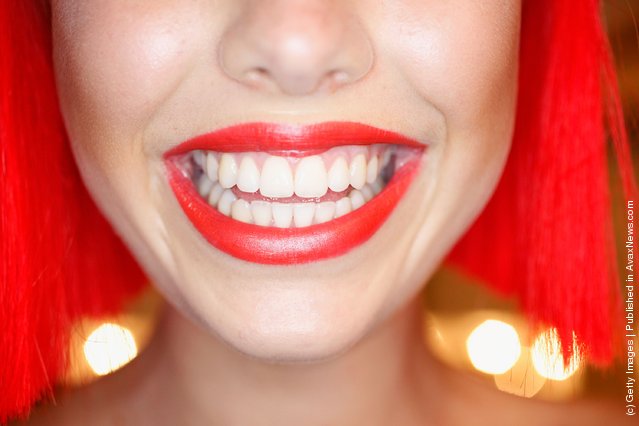