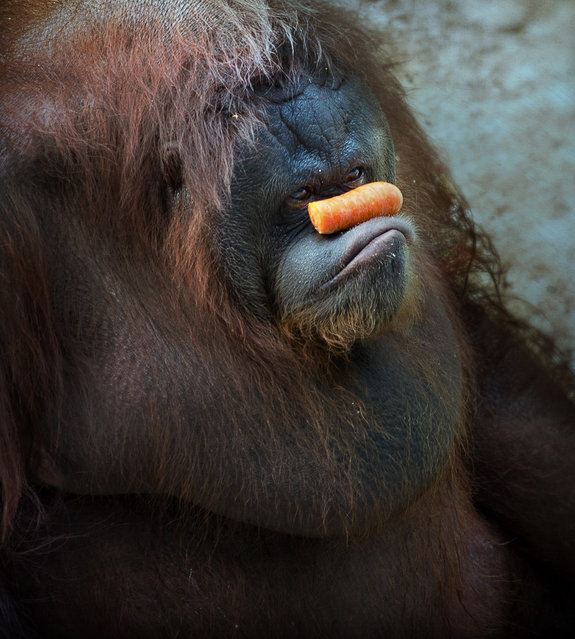 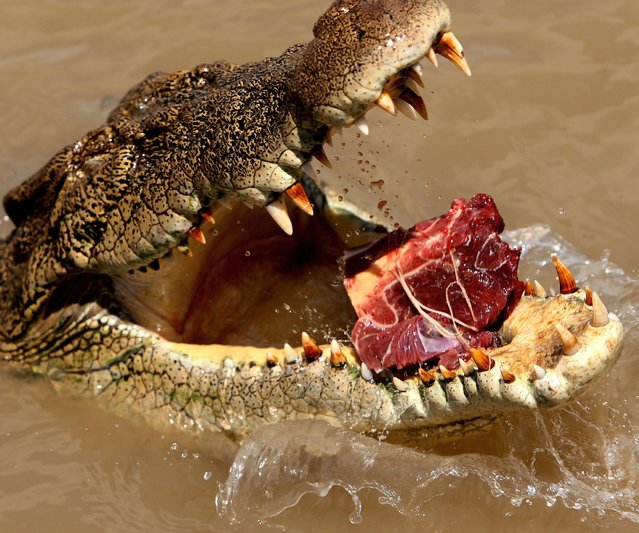 An Saltwater crocodile eats meat outside the Adelaide River in the Northern Australia. (Photo by Greg Wood/AFP Photo) 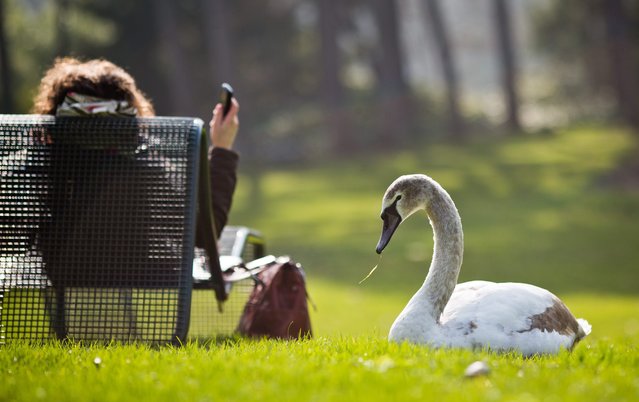 A young swan sits next to a woman on a lawn in the Spring temperatures in the Palmengarten in Frankfurt Main, Germany, 07 March 2014. (Photo by Frank Rumpenhorst/EPA) 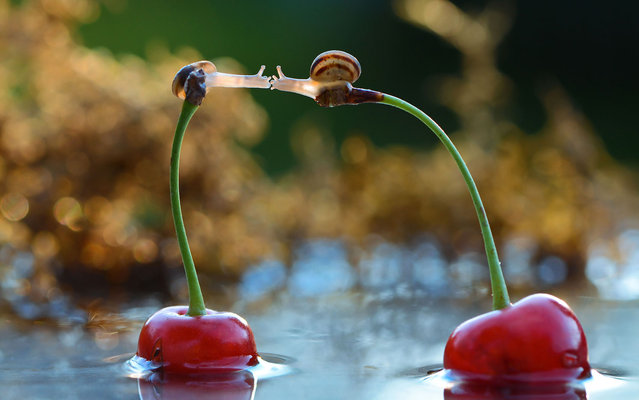 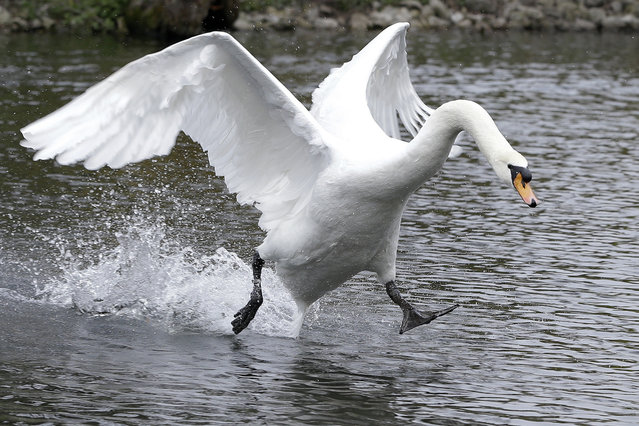 A mute swan moves across a lake, as it defends the territory around it's nest from other waterfowl, at Kew Gardens in London, Friday, March 28, 2014. (Photo by Kirsty Wigglesworth/AP Photo) 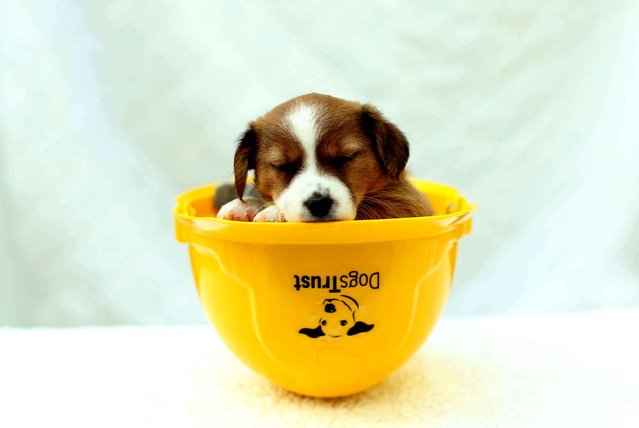 This young terrier was born in Dublin five weeks ago. (Photo by Fran Veale/SIPA Press) 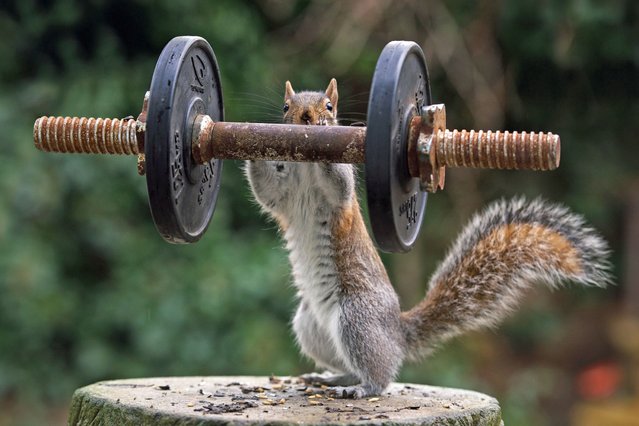 This squirrel must be nuts for exercise – as it appears to be lifting weights. (Photo by Caters News) 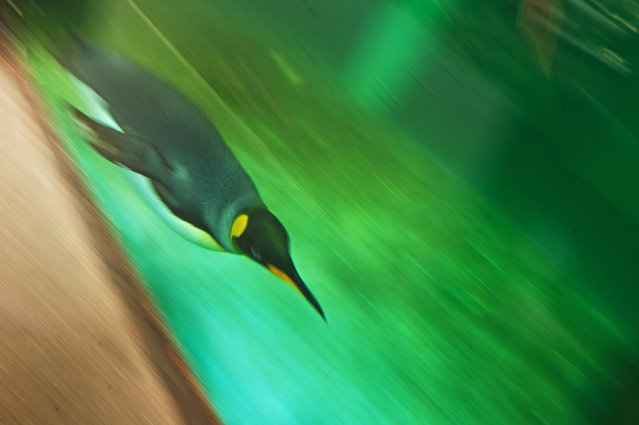 A Gentoo penguin swims through its basin at the Tierpark Hellabrunn zoo in Munich, southern Germany, on March 18, 2014. (Photo by Nicolas Armer/AFP Photo/DPA) 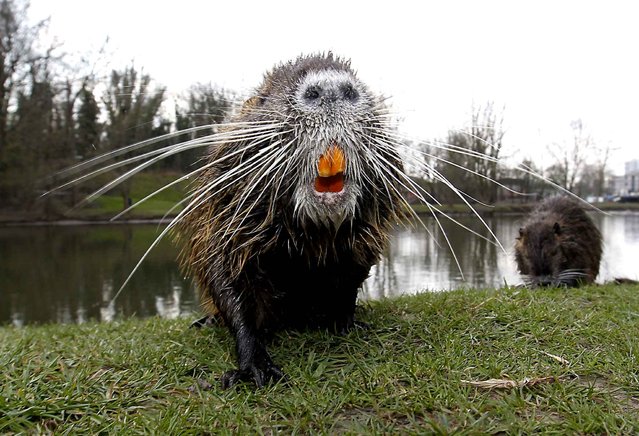 A beaver in Halle Zoo in Germany. (Photo by Steffen Schellhorn/DDP IM/SIPA Press) 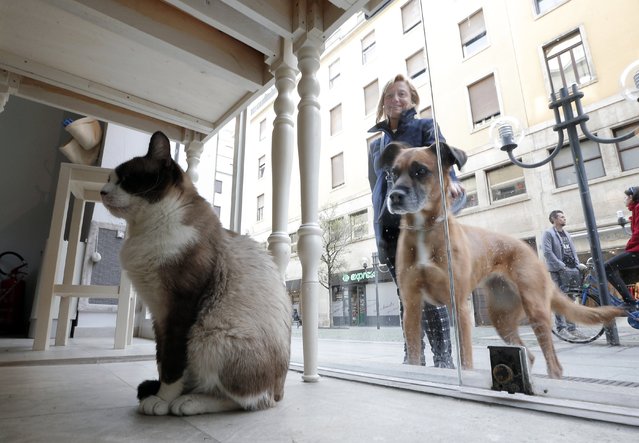 A dog looks at a cat sitting inside the Miagola Cafe in Turin, on March 22, 2014. The newly opened Miagola Cafe is a concept bar where cats and human beings can have a drink and relax. The first cat cafe was opened in Taiwan in 1998, followed by others in various European cities such as Budapest, Berlin, Munich, Paris or Madrid. (Photo by Marco Bertorello/AFP Photo) 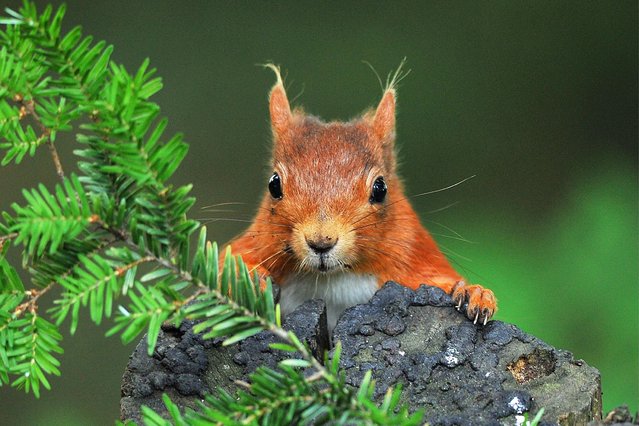 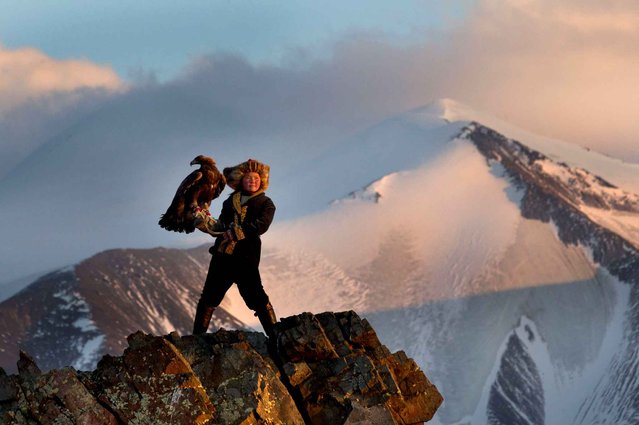 A young girl Ashol Pan (13) with his eagle in the mountains of the province of Bayan-Olgiy Mongolia. (Photo by Caters News) 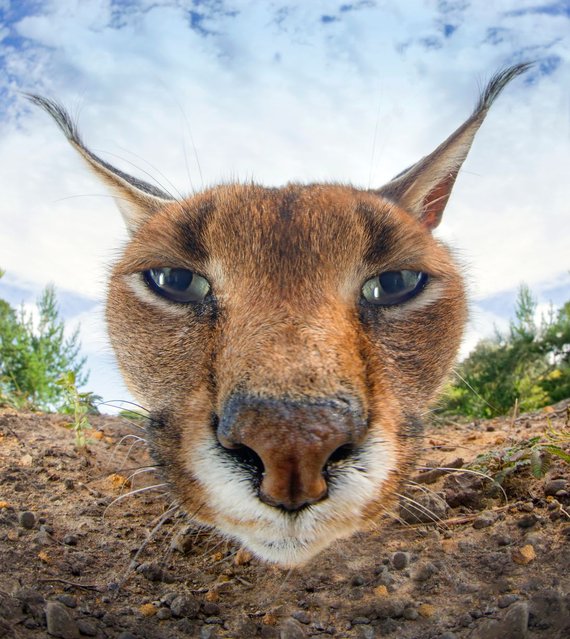 A close up of a caracal lynx's face looking into a camera on January 2014 in Western Cape, South Africa. (Photo by Dale Morris/Barcroft Media) 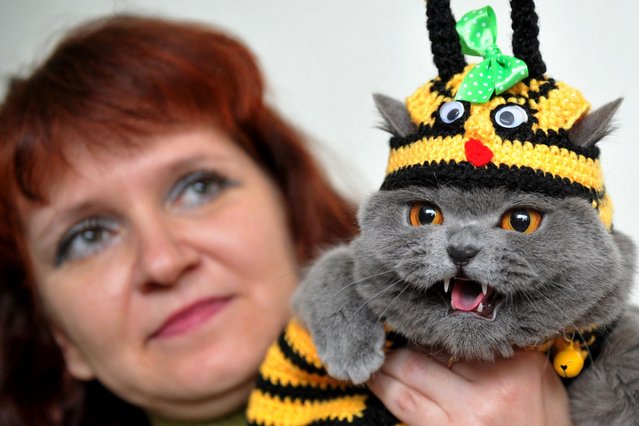 A woman and her British Shorthair cat, wearing a bee hat, pose during a cat exhibition in Bishkek on March 23, 2013. Cat lovers from Kyrgyzstan, Kazakhstan and Uzbekistan took part in the exhibition. (Photo by Vyacheslav Oseledko/AFP Photo) 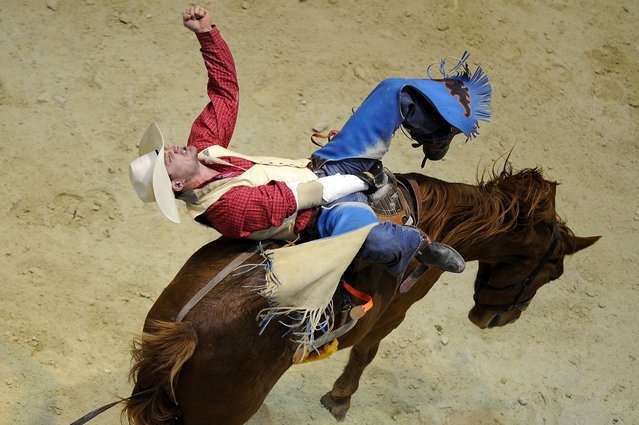 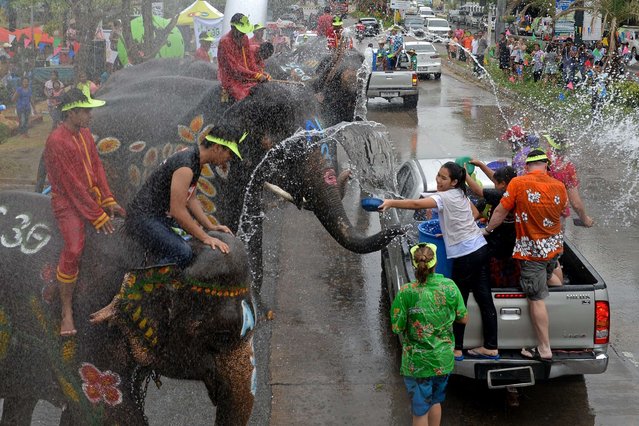 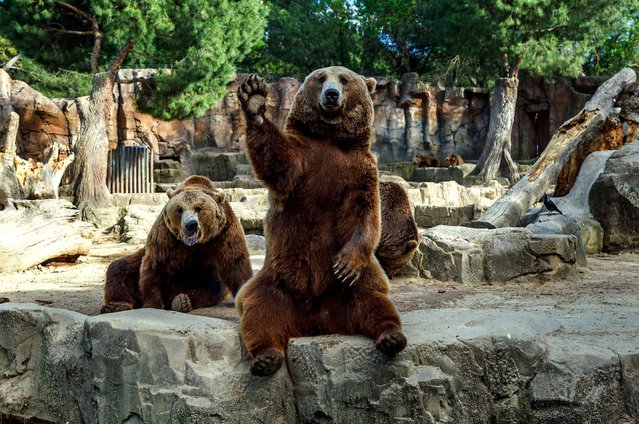 A brown bear welcomes visitors at the Madrid Zoo. (Photo by Caters News) 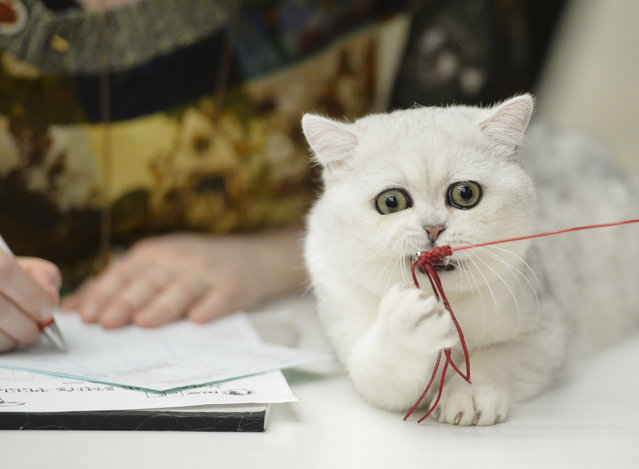 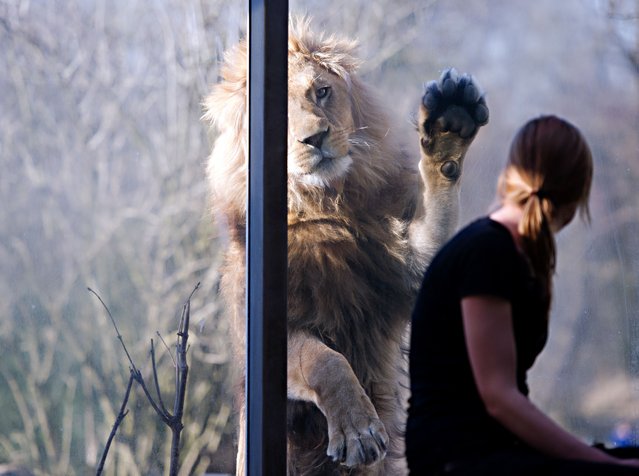 A zoo-keeper looks at lion Max as he scratches a window at the zoo Hellabrunn in Munich, southern Germany, on March 17, 2014. (Photo by Nicolas Armer/AFP Photo/DPA) 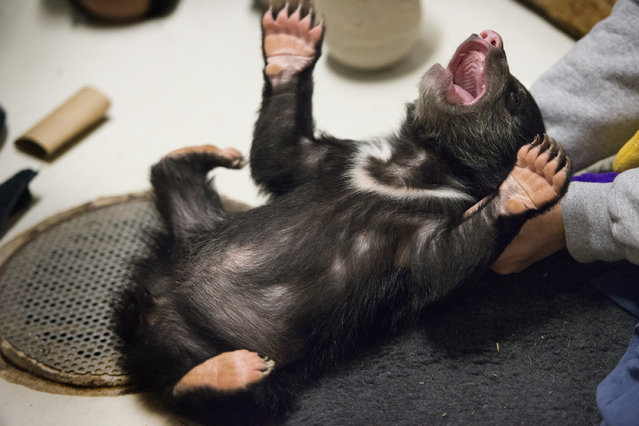 Curator Tony Barthel plays with a female sloth bear cub that's being hand-raised at the Smithsonian National Zoo in Washington, DC on March 18, 2014. The sloth bear mother, Khali, gave birth to three cubs on December 29th. Within 20 minutes after giving birth she injested one of the cubs and part of one the next day. It's not uncommon for carnivores to ingest stillborn cubs or even live cubs if they or the mother are compromised in some way. The keepers decided to hand-raise the surviving cub that “was not thriving”. But, it's thriving now and being fed round the clock with warm milk, some yogurt and an orange. This isn't the first sloth born at the Zoo; there have been many. However, this is a first time zookeepers have raised one by hand. (Photo by Linda Davidson/The Washington Post) 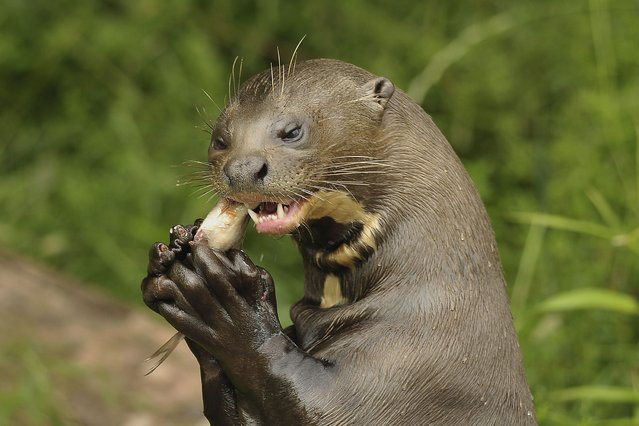