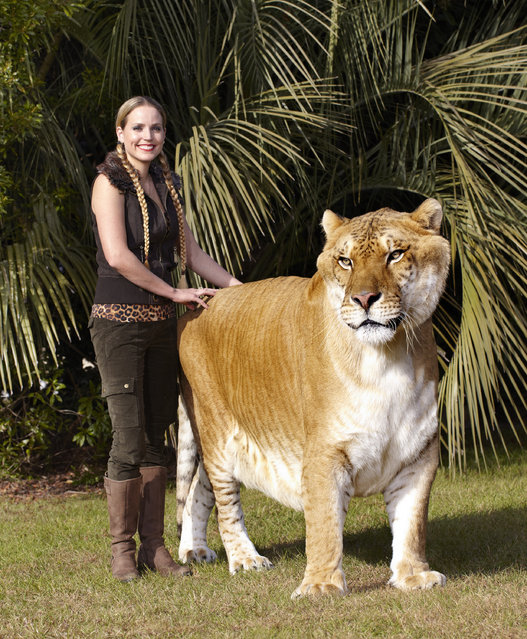 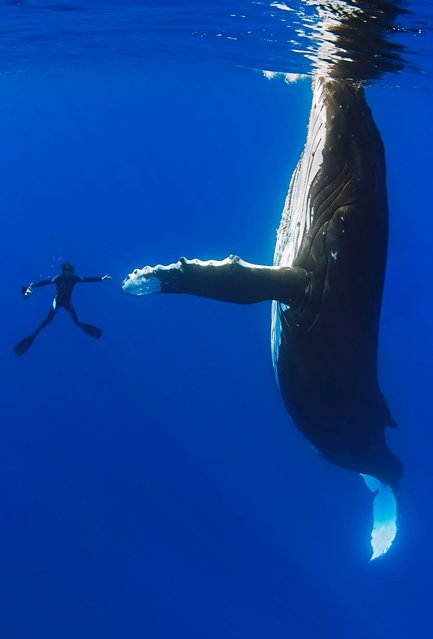 This is the moment a diver appears to shake hands with a giant 52ft whale. The divers were just metres away when one humpback whale – which weighs 36,000kg – extends its giant flipper in a peaceful manner. (Photo by Masa Ushioda/SeaPics/Solent News & Photo Agency) 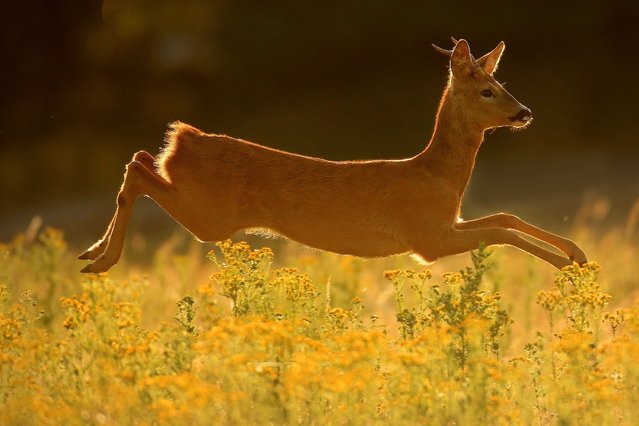 A wildlife photographer hides himself in full camouflage just yards from unsuspecting creatures to capture the brilliance of nature. (Photo by Jon Hawkins/Solent News) 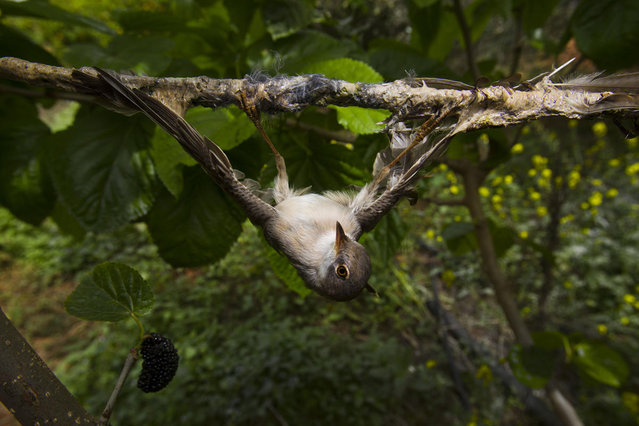 A badly injured Lesser White Throat hangs by it wings and feet from a gluey tree sap covered “limestick” placed by songbird poachers, April 30, 2012. The bird was found by activists from the Committee Against Bird Slaughter (CABS), in the town of Ayia Napa, Cyprus and taken to the home of a fellow animal rights activist to be nursed back to health, but died soon after. (Photo by David Guttenfelder/AP Photo/National Geographic Magazine) 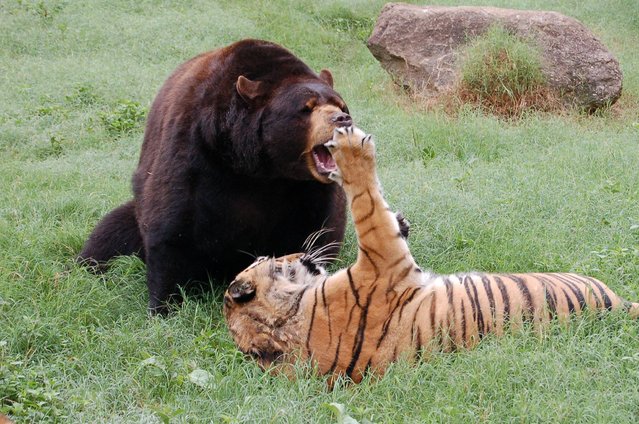 It may sound like the start of a joke but a bear, a lion and a tiger have formed an unusually strong bond, and even share the same enclosure at a zoo in America. Leo the lion, Baloo the bear and Shere Khan the tiger were taken to the Noah's Ark Animal Rescue Centre in Georgia, US, in 2001, after being found by police officers during a drug raid at an Atlanta home, and have been together ever since. In this photo Baloo and Shere Khan spend most of the day playing while Leo sleeps. (Photo by Noah's Ark Animal Sanctuary/Facebook) 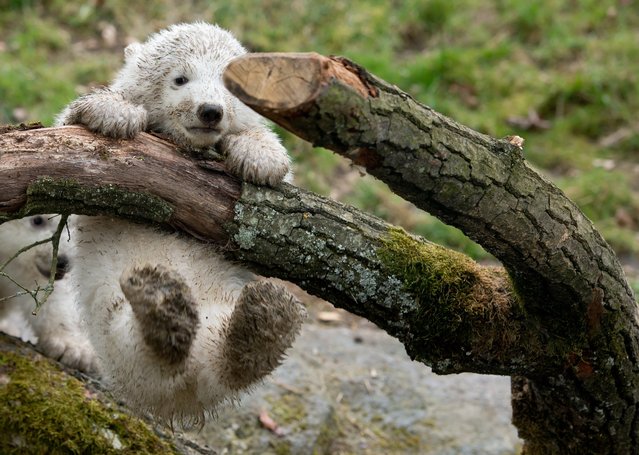 Two 14-week old polar bear twins explore their enclosure at the Hellabrunn Zoo for the first time in Munich, Germany, 19 March 2014. The two cubs who were born on 09 December 2013 were introduced to public on the morning of 19 March. (Photo by Sven Hoppe/EPA) 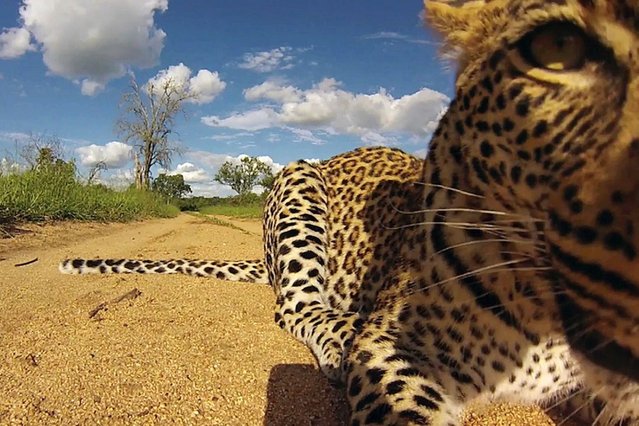 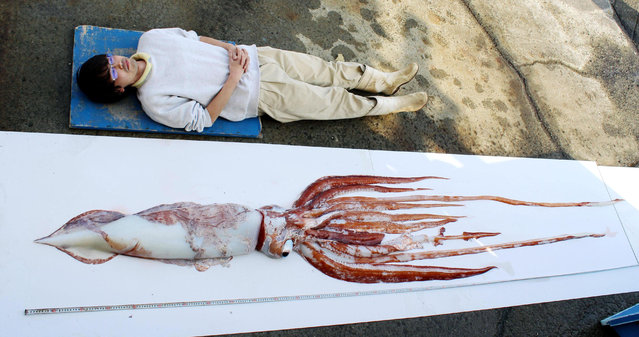 A rare giant squid, caught March 12 near Yokosuka, Kanagawa Prefecture, Japan, is displayed next to a man to show how long it is. (Photo by Keikyu Aburatsubo Marine Park/KYODO) 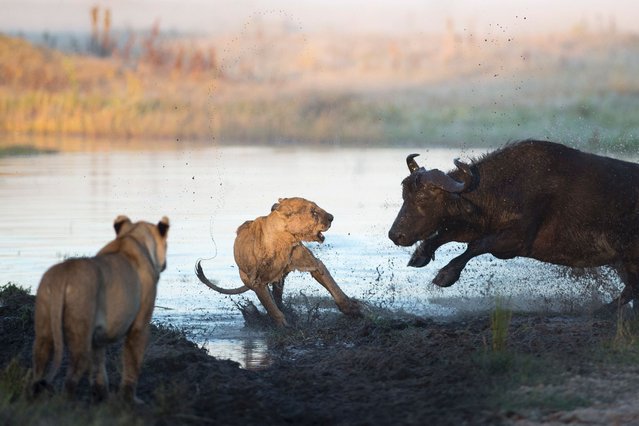 A herd of buffalo launched a bloody battle against a hungry lion attacking their young – and managed to save a tiny calf caught in its jaws. (Photo by Ben Cranke/Solent News & Photo Agency) 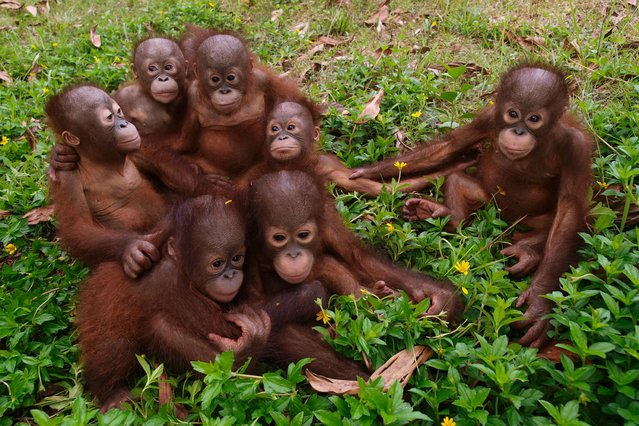 These cheeky young orangutans managed to behave themselves for a few minutes as they huddled together for a family portrait. (Photo by Solent News and Photo Agency) 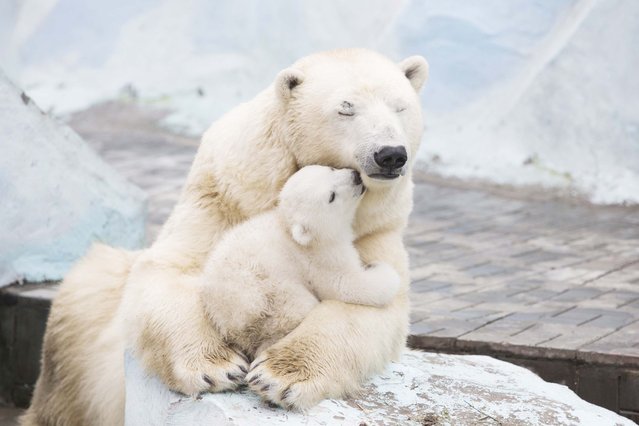 This is the touching moment a polar bear cub snuggles up to mum – and plants a sloppy smacker right on her lips. (Photo by Caters News) 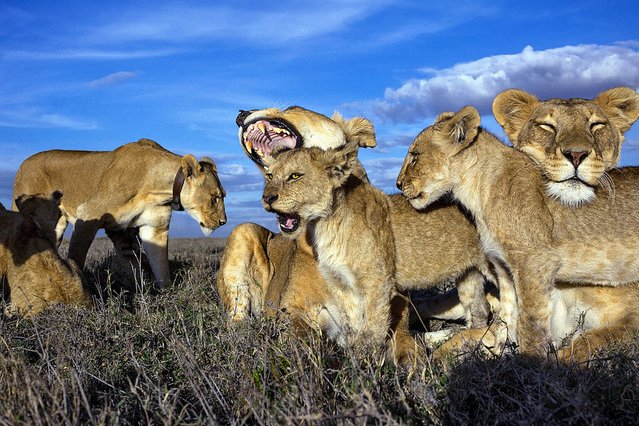 A pride of lionesses in the Serengeti . (Photo by Sony World Photography Awards) 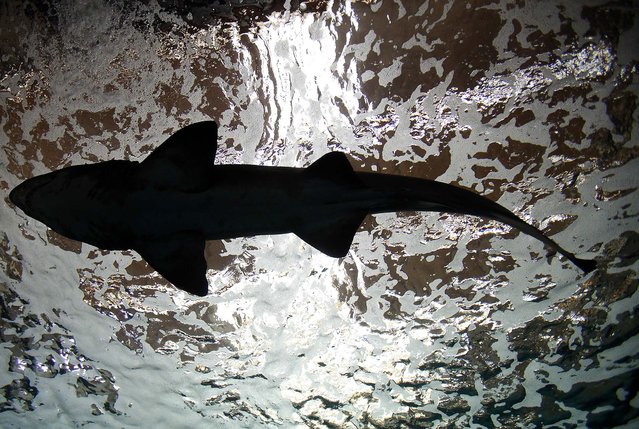 A sand shark moves inside a tank at the Cretaquarium in the city of Iraklion, on the Greek island of Crete, on April 6, 2014. The Sea World aquarium, the biggest in the East Mediterranean sea, contains some 4,000 examples of marine life. (Photo by Dimitri Messinis/Associated Press)
Edit Del
23 May 2014 09:54:00, post received 0 comments
Publication archive:
←   →
Popular tags:
All tags
Last searches: