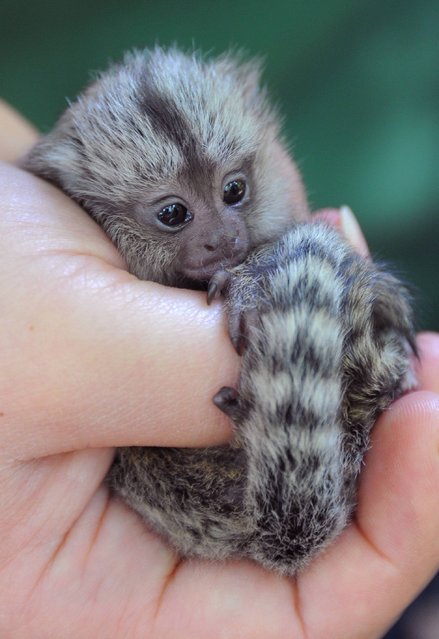 The Eberswalde Zoo in Germany welcomed this adorable newborn marmoset on June 29, 2012. The miniscule monkey was one of three born in the litter and had trouble taking milk from its mother, according to the European Pressphoto Agency. So the zoo is now raising the little one by hand, and from the looks of it, those hands are a perfect fit. (Photo by Theo Heimann/AP) 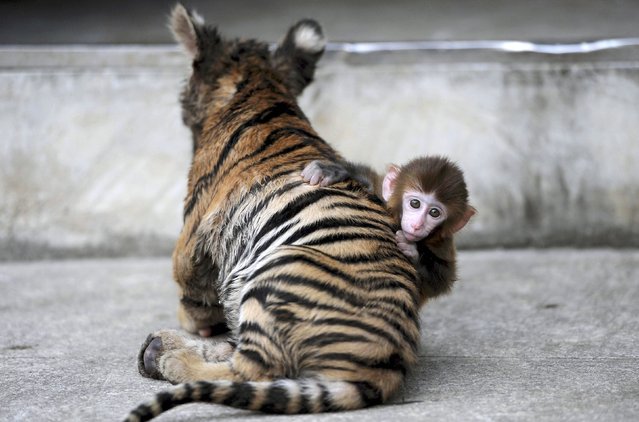 A baby rhesus macaque (Macaca mulatta) looks up as it plays with a tiger cub at a zoo in Hefei, Anhui province, August 2, 2012. (Photo by Jianan Yu/Reuters) 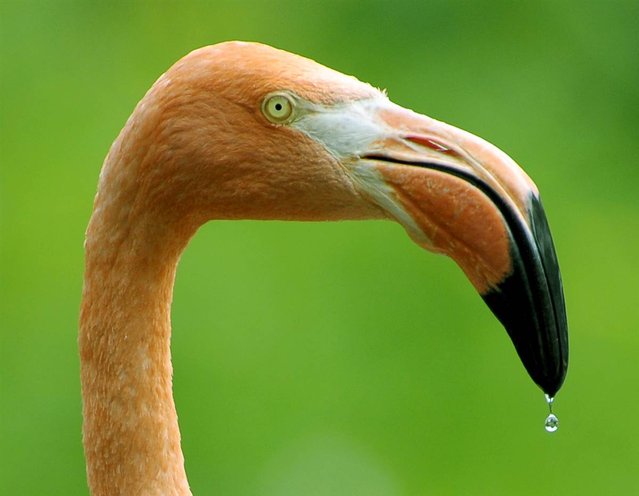 A flamingo is photographed at the Dresden Zoo on July 31, 2012. (Photo by Matthias Rietschel/AP) 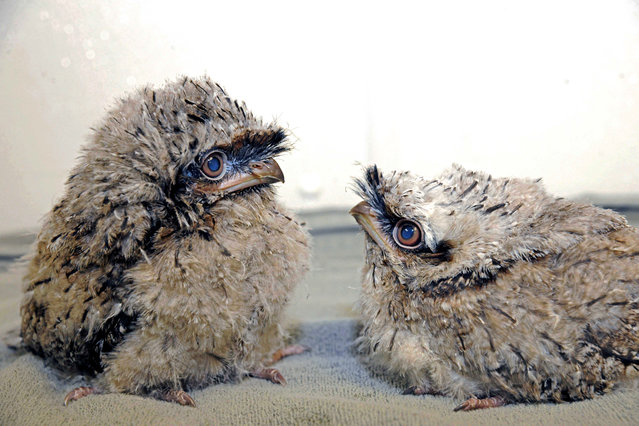 August 2, 2012 photo provided by the Chicago Zoological Society, two tawny frogmouth chicks hatched on July 9 and 11 are seen at Brookfield Zoo in Brookfield, Ill. They are now a little over 3 weeks old and are being handreared by zookeepers because the parents abandoned the nest after only a few weeks of incubating the eggs. To give the chicks a chance at surviving, a decision was made to pull the eggs and put them in an incubator, located in an off exhibit area at the Zoo. (Photo by Jim Schulz/AP) 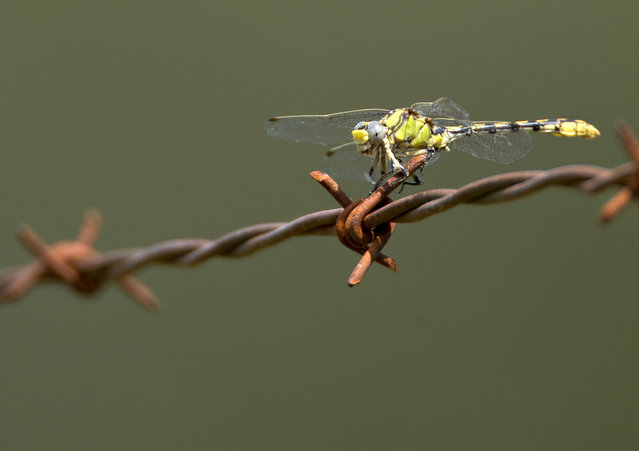 A dragonfly rests on a pointed barb of a barbed-wire fence along the pasture of a ranch near Roseburg, Ore., on August 5, 2012. (Photo by Robin Loznak/Zuma Press) 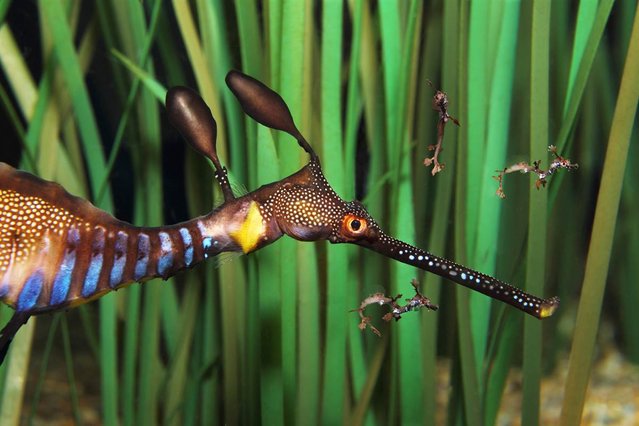 A male weedy sea dragon at the Monterey Bay Aquarium swims with some of his newly hatched babies in Monterey, Calif., on August 2, 2012. (Photo by Randy Wilder/AP) 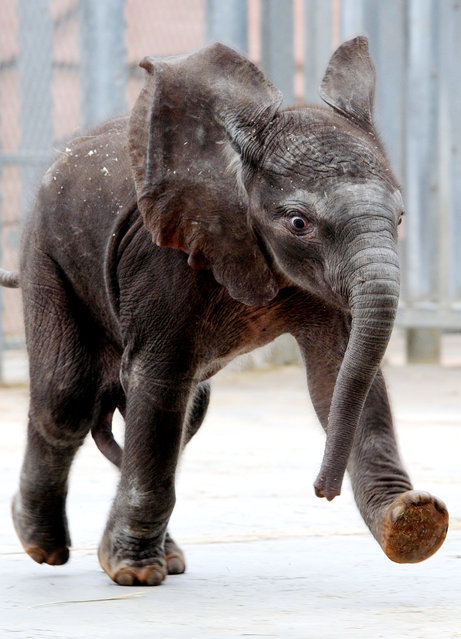 Rungwe, the first elephant born from artificial insemination in France, takes its first steps, on August 6, 2012 at the Beauval zoo, in Saint-Aignan-sur-Cher, central France. The African elephant, named after a volcano in Tanzania, was born on July 20 after a gestation of about 23 months. This is the first small for her mother, N'Dala, 23. (Photo by Jean-francois Monier/AFP) 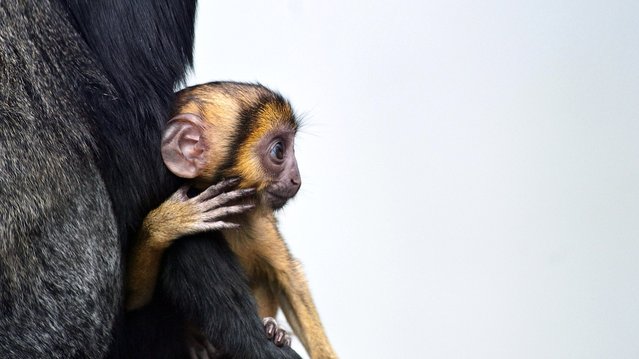 Lisimba, a two-month-old Hamlyn's monkey cub, is pictured with its mother, Karmina, on August 2, 2012 at the zoo in Mulhouse, France. (Photo by Sebastien Bozon/AFP) 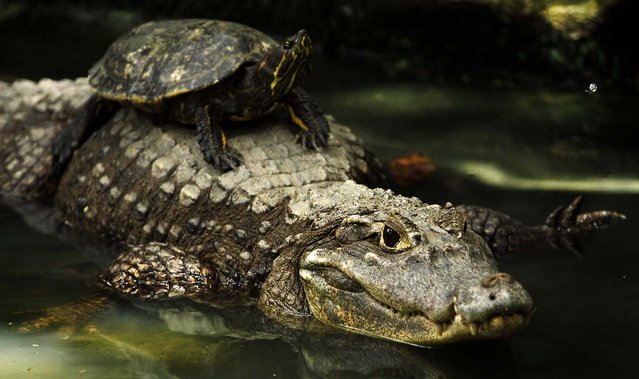 A turtle rides on an alligator's back at the Summit Garden Zoo in Panama City on August 10, 2012. (Photo by Arnulfo Franco/Associated Press) 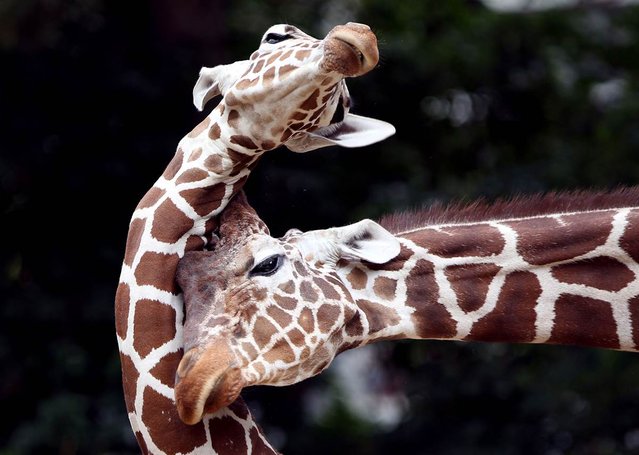 Two reticulated giraffes play at the Zoo in Cologne, Germany. In the wild, giraffes live in sub-Saharan Africa. (Photo by Oliver Berg/AFP) 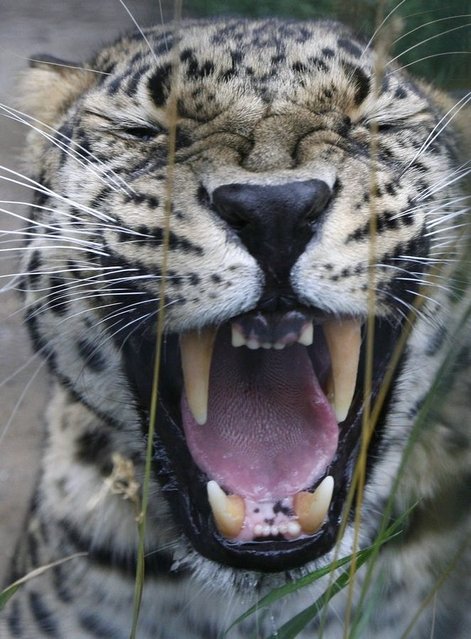 Kostik, an Amur leopard looks out from his enclosure at the Royev Ruchey Zoo in Krasnoyarsk, Russia, on August 7, 2012. The leopard was brought to the zoo as part of a breeding program. Amur leopards are one of the most endangered species of large cats in the world. (Photo by Ilya Naymushin/Reuters) 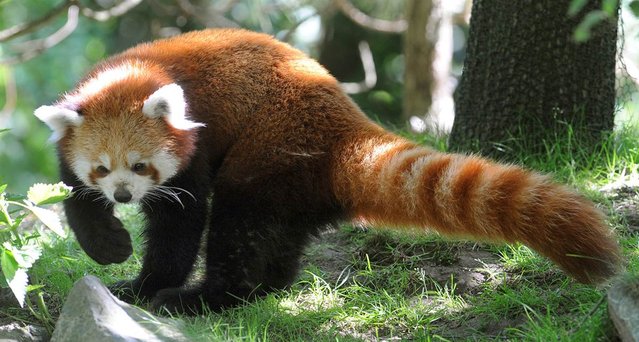 Red panda Ole explores his new open air enclosure at the zoo in Hanover, Germany, on August 3, 2012. The red panda was brought to Hanover to meet three-year-old female red panda Shana and, as zookeepers hope, to become a couple. (Photo by Holger Hollemann/AFP) 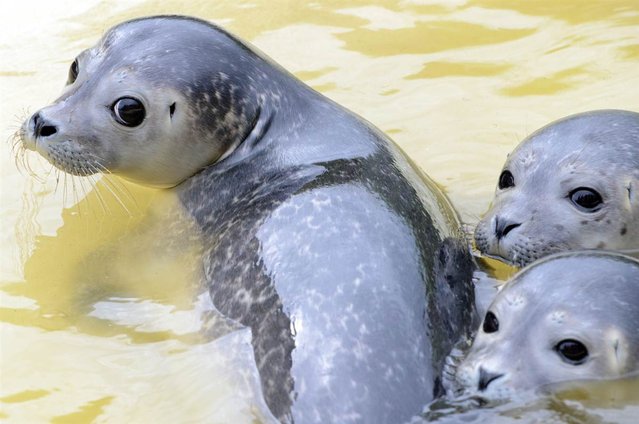 Young seals look up at the Zoo in Friedrichskoog, northern Germany, on July 29, 2012. (Photo by Daniel Bockwoldt/AFP) 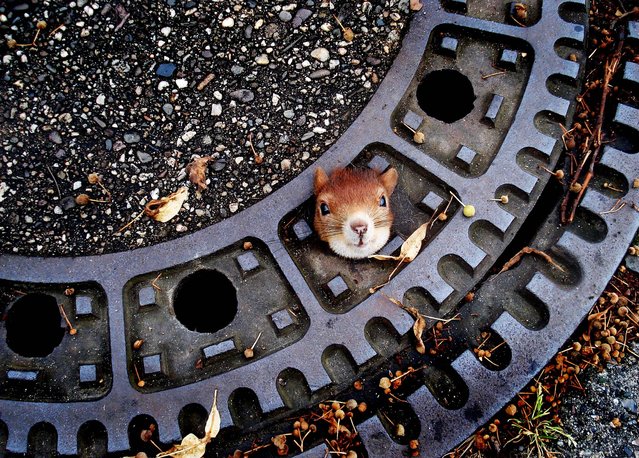 A squirrel is trapped in a manhole cover in Isenhagen, Germany on August 5, 2012. After they were called by neighbors, police managed to free the animal by using olive oil. (Photo by Police Hanover) 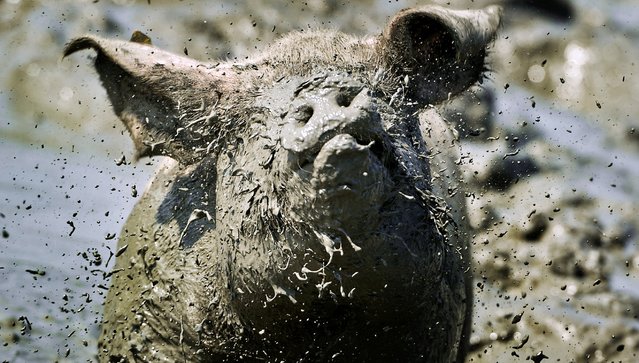 A pig lying in the mud of the “best mud pool” of the Netherlands, in Buren, on July 26, 2012. This particular mud pool was chosen by the Dutch animal welfare organization “Wakker Dier” ('Awake Animal') because of the perfect size, dept and muddy-ness, a perfect place for a pig to cool off during warm summer days. (Photo by Koen Van Weel/AFP) 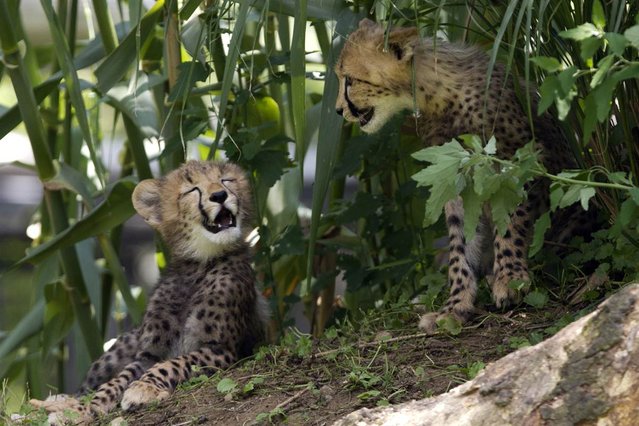 Two 3-month-old cheetah cubs get some shade from the heat at the National Zoo in Washington, D.C., on July 28, 2012. (Photo by Jacquelyn Martin/AP) 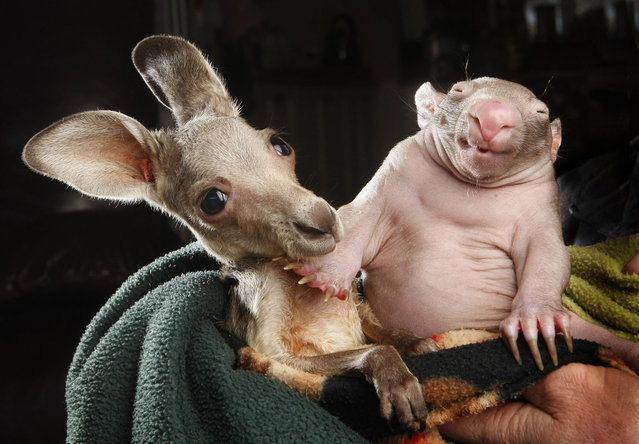 Orphaned kangaroo and wombat. When Anzac, an orphaned 5-month-old kangaroo, was found in the Macedon Ranges north of Melbourne, Australia, rescuers thought he looked a little lonely. Anzac's mother had been hit by a car. Thanks to the safety of her pouch, Anzac survived even though his mother did not. In order to comfort him, workers at the Wildlife Kilmore Rescue Center introduced him to Peggy, a 5-month-old baby wombat whose mother was also killed after being hit by a car. The two, who are both marsupials, shared a pouch together and have become inseparable. (Photo by Rob Leeson/Newspix via Rex USA)
Edit Del
12 Aug 2012 09:47:00, post received 0 comments
Publication archive:
←   →
Popular tags:
All tags
Last searches: