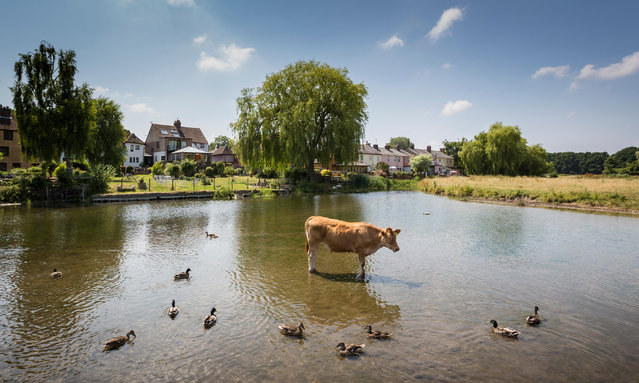 A cow and some ducks keep cool in the river Stour in Suffolk, Sudbury, England on June 27, 2018. (Photo by Graham Turner/Alamy Live News) 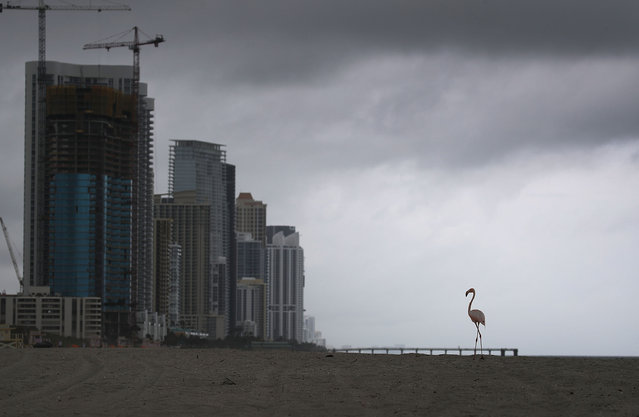 A lone pink flamingo is seen as it walks along Haulover Beach on May 17, 2018 in Miami Beach, Florida. Lifeguards on the beach said that the flamingo showed up on Saturday and has been hanging around since. Biologists say that it is unusual for the birds to fly solo and are keeping an eye on the bird in case it becomes distressed. (Photo by Joe Raedle/Getty Images) 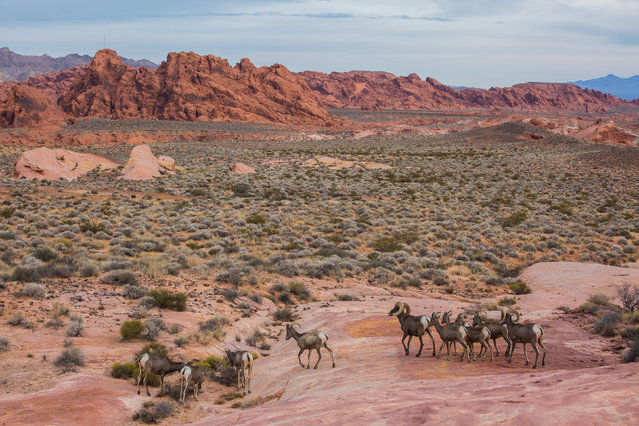 Animals walk after sunrise in the Valley of Fire State Park on October 18, 2017 in Clark County, Nevada. (Photo by Adam Gray/Barcroft Images) 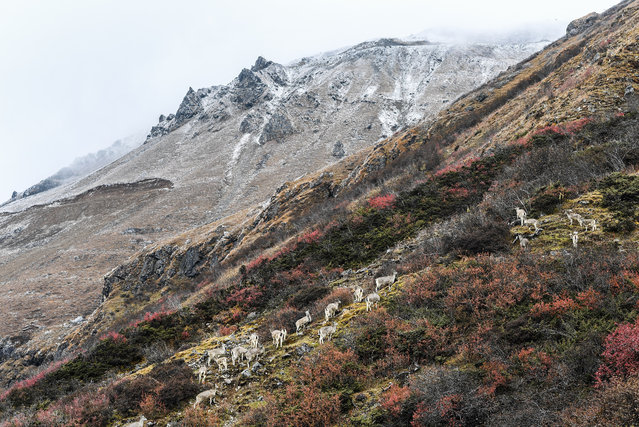 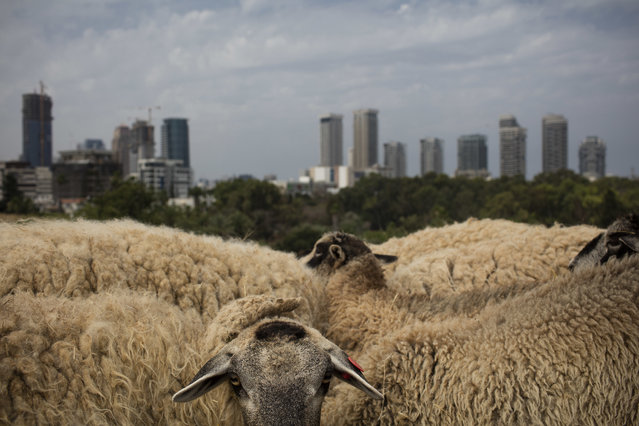 A small flock of sheep graze in a field overlooking Tel Aviv as part of a project to bring back the nature to the city like it use to be, in Tel Aviv, Israel, Monday, May 28, 2018. (Photo by Oded Balilty/AP Photo) 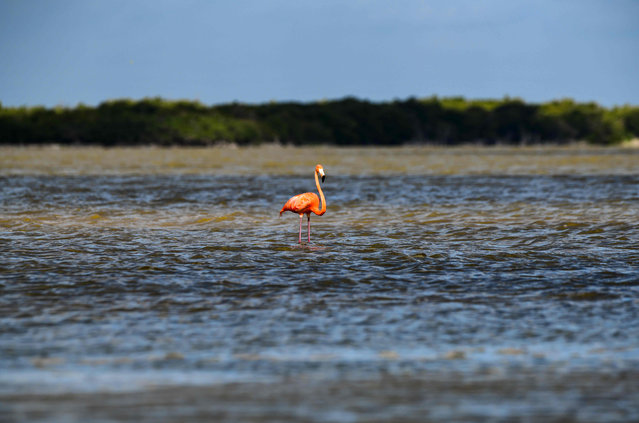 Pink flamingos (Phoenicopterus ruber) are pictured at the Rio Lagartos Biosphere Reserve, in Yucatan, Mexico on June 21, 2018. At least 21,960 nests were recorded in this nesting season, a historical figure according to Mexican authorities. (Photo by Ronaldo Schemidt/AFP Photo) 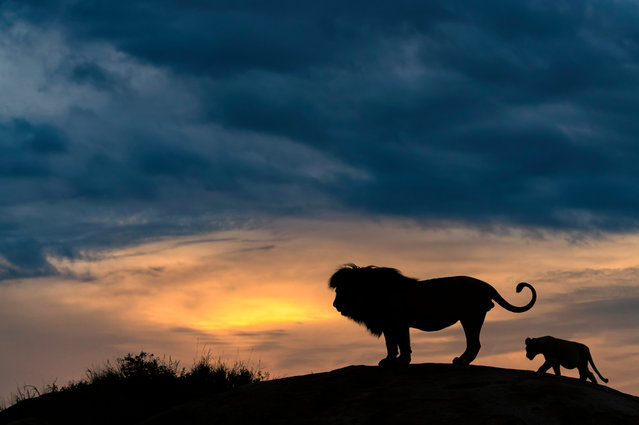 A lion and its cub appear like the famous scene fromthe Disney classic The Lion King as they sit on a rock and gaze into the evening sunset in Serengeti, Tanzania on May 17, 2018. (Photo by Marc Mol/Solent News) 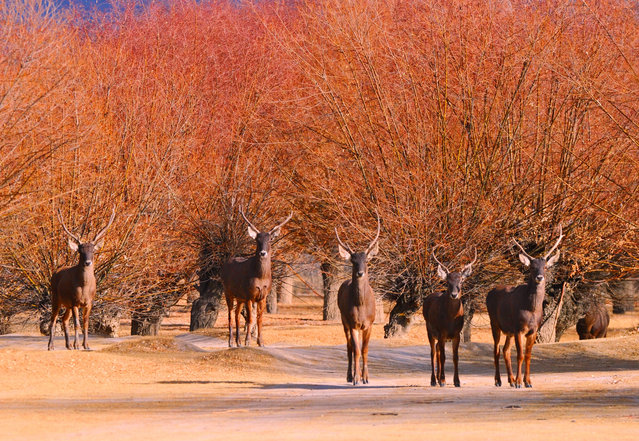 Photo taken on January 6, 2018 shows red deers in a forest of the nature reserve in Shannan City of southwest China's Tibet Autonomous Region. Man-made sand-break forests of the nature reserve have been expanded from 500 mu (33.3 hectares) in the 1950s to 10,200 mu (680 hectares). The forests are now a winter habitat for animals including red deers, blue sheep and kinds of birds. (Photo by Zhang Rufeng/Xinhua/Barcroft Images) 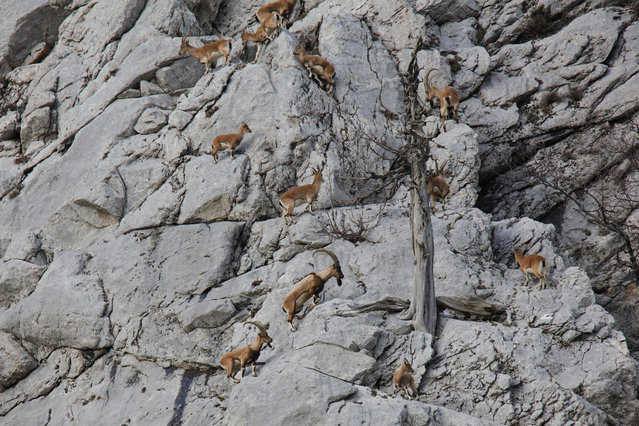 Capra Aegagruses, which are on the Red List of Threatened Species of International Union for Conservation of Nature (IUCN), climb a mountain in Antalya, Turkey on March 02, 2018. Officials reported Capra Aegagruses' number has been increased due to the ban of their hunting and taming within the government's legal obligation. (Photo by Ali Ihsan Ozturk/Anadolu Agency/Getty Images) 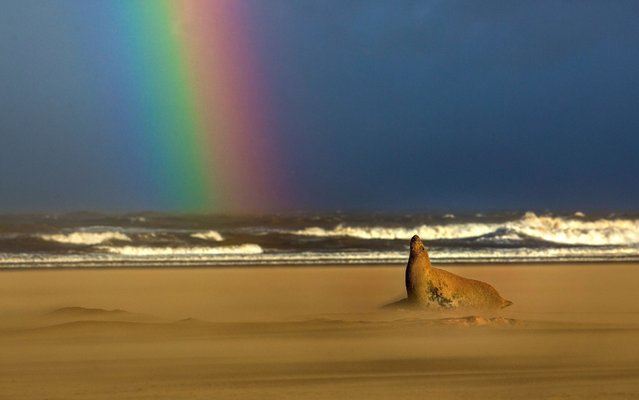 A grey seal basks under a rainbow on a beach on the Lincolnshire coast, England on November 21, 2017. (Photo by Sean Weekly/Caters News Agency) 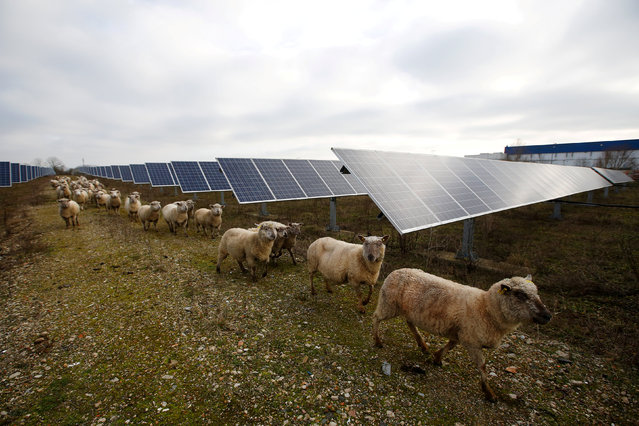 Sheep are herded at a photovoltaic power plant in Allonnes near Le Mans, France January 8, 2018. (Photo by Stephane Mahe/Reuters) 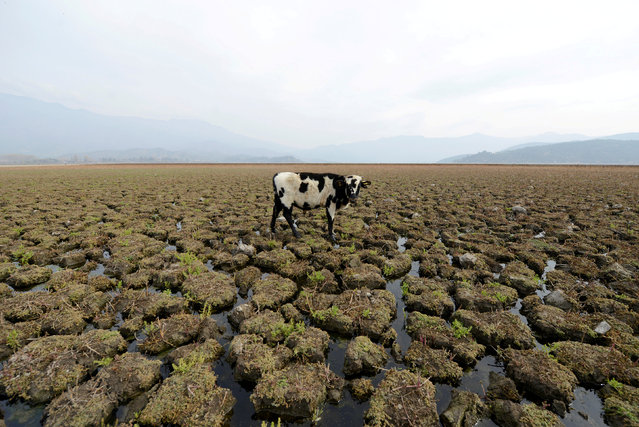 A cow is seen on land that used to be filled with water, at the Aculeo Lagoon in Paine, Chile, May 14, 2018. (Photo by Matias Delacroix/Reuters) 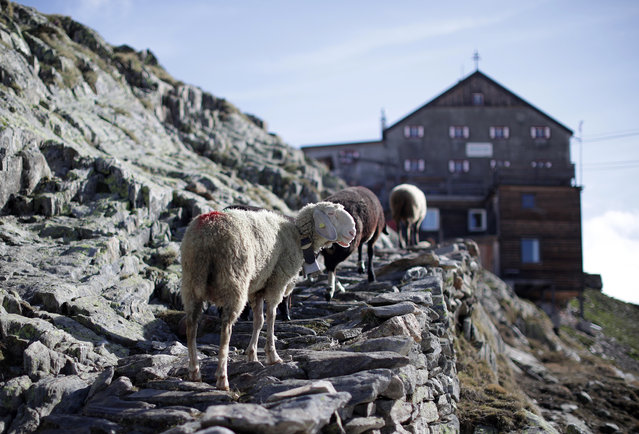 Sheep make their way up to the mountain shelter “Schoene Aussicht” (Bella Vista) at 2,842 meters above sea level, in the autonomous region of South Tyrol, Italy, June 9, 2018. (Photo by Lisi Niesner/Reuters) 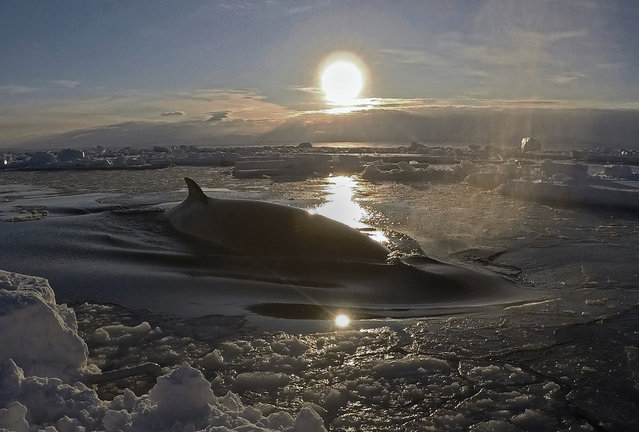 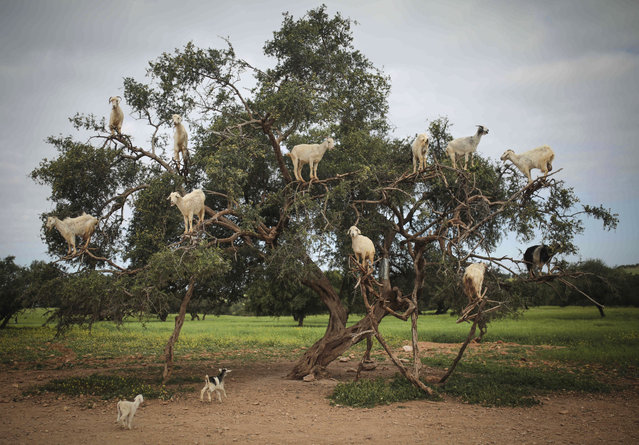 Tree-climbing goats feed on an Argania Spinosa, known as an Argan tree, in Essaouira, southwestern Morocco, Wednesday, April 4, 2018. By eating the fruit and spitting out the seeds, the goats help in the process of manufacturing Argan oil. (Photo by Mosa'ab Elshamy/AP Photo) 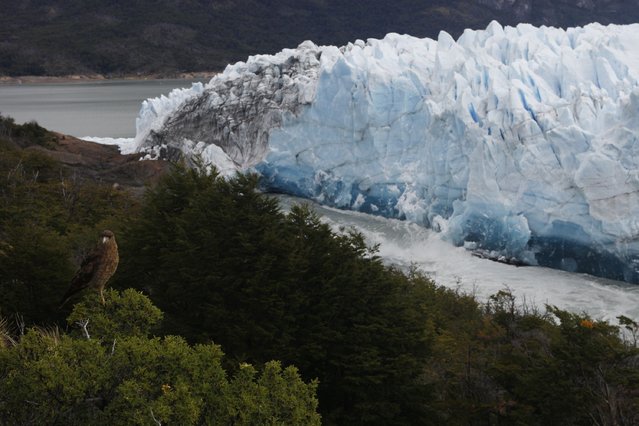 A chimango, a bird of prey, is seen with the Perito Moreno Glacier at the back, at Los Glaciares National Park, near El Calafate in the Argentine province of Santa Cruz, on March 10, 2018. An arch of ice formed at the tip of the Perito Moreno, between the glacier and the shore of Argentino lake, started collapsing into the water on Saturday, a natural display that happens just once every several years. Such arches form roughly every two to four years, when the glacier forms a dam of ice that cuts off the flow of water around it into the lake -- until the water breaks through, opening up a steadily wider tunnel that eventually becomes a narrow arch... and then collapses. (Photo by Walter Diaz/AFP Photo) 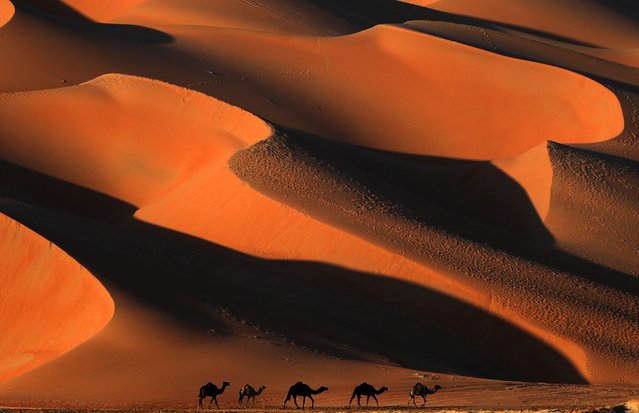 Camels walk across the Liwa desert, some 250 kilometres west of the Gulf emirate of Abu Dhabi, during the Liwa 2018 Moreeb Dune Festival on January 2, 2018. The festival, which attracts participants from around the Gulf region, includes a variety of races (cars, bikes, falcons, camels and horses) or other activities aimed at promoting the country's folklore. (Photo by Karim Sahib/AFP Photo) 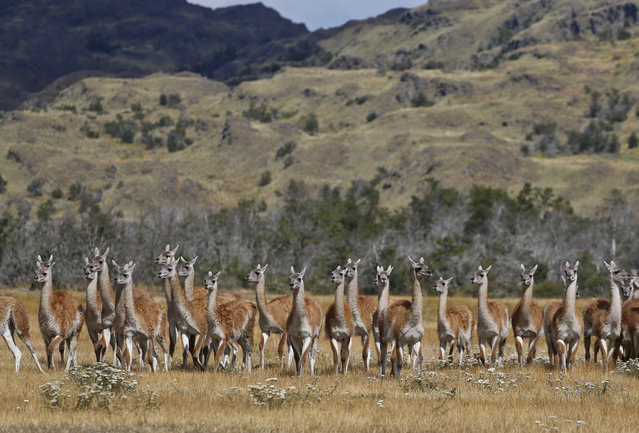 Guanacos stand during a signing ceremony in Patagonia Park, Monday, January 29, 2018. Chile's president signed decrees creating vast new national parks using lands donated by the Tompkins Conservation, in what is believed to be the largest private donation of land ever from a private entity to a country. (Photo by Esteban Felix/AP Photo) 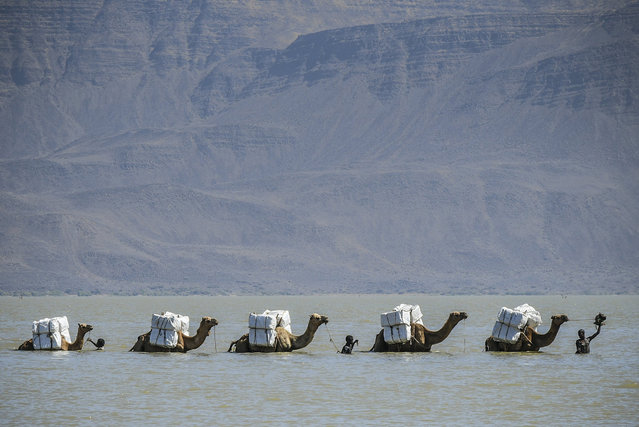 A caravan of camels crosses Gemeri Lake to transport treated mosquito nets to Afambo, some 500km northeast of the capital Addis Ababa, in the remote Afar region, Ethiopia, 14 February 2018 (issued 15 February 2018). US aid agency US Agency for International Development (USAID) in cooperation with Ethiopian government distributed teated mosquito nets to local Afar people as part of its health programme in the country. Afar region is one of the most disadvantaged regions in Ethiopia and is particularly prone to malaria. (Photo by EPA/EFE/Stringer) 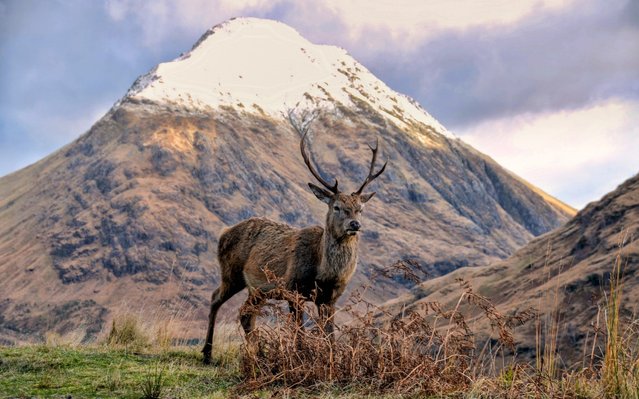 A stag stands by the snow capped Buachaille Etive Mòr, generally known to climbers simply as The Buachaille, a mountain at the head of Glen Etive in the Highlands of Scotland. (Photo by Charles McGuigan/Bav Media)
Edit Del
05 Jul 2018 00:01:00, post received 0 comments
Publication archive:
←   →
Popular tags:
All tags
Last searches: