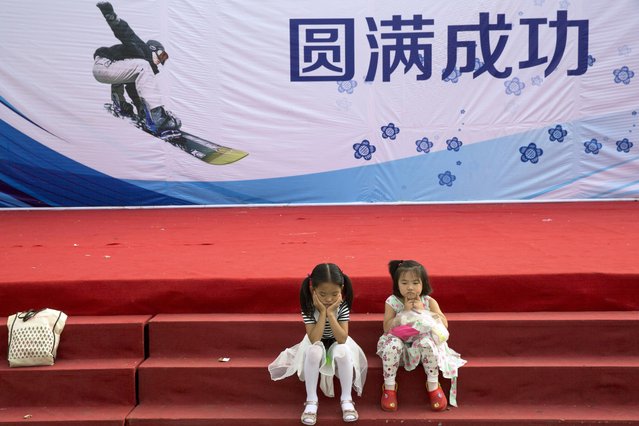 Chinese girls sit near a backdrop stating “A Complete Success” in honor of Beijing hosting the 2022 Winter Olympics Saturday, August 1, 2015. Having made history as the first city to win hosting rights for both the Summer and Winter Olympics, Beijing now faces a slew of challenges, from ensuring adequate snow in a bone-dry region to ramping up support for winter sports in a nation where few people ski or skate. (Photo by Ng Han Guan/AP Photo) 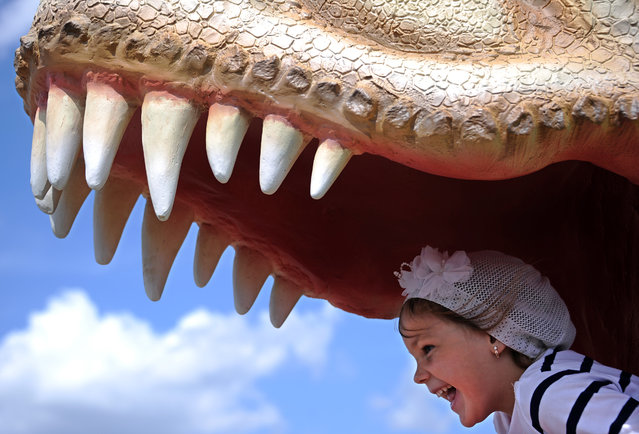 A girl plays inside the dinosaur jaws during the opening of the Dinosaur Park in Minsk on July 31, 2015. (Photo by Sergei Gapon/AFP Photo) 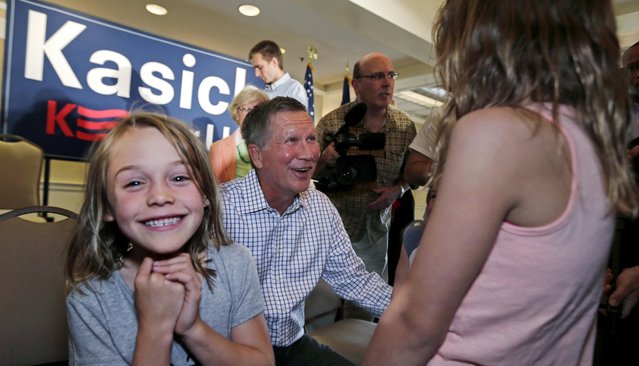 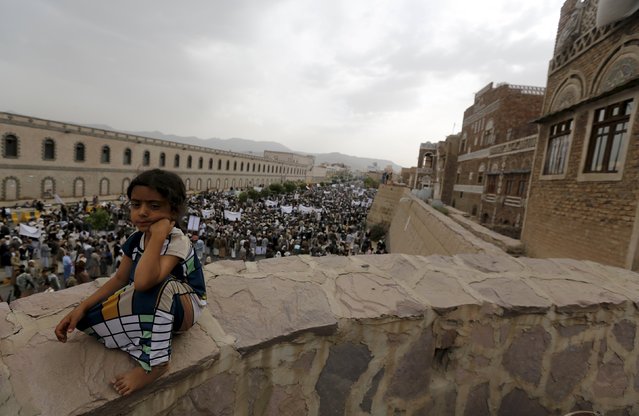 A girl sits on a wall as Houthi followers demonstrate against Saudi-led air strikes in Yemen's capital Sanaa July 24, 2015. (Photo by Khaled Abdullah/Reuters) 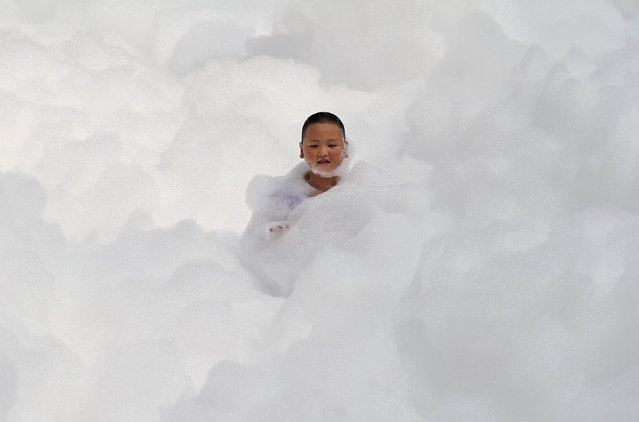 A boy is seen covered in foam, which is used to help participants cool off in the summer heat, during a running event in Yantai, Shandong province, China, July 25, 2015. (Photo by Reuters/Stringer) 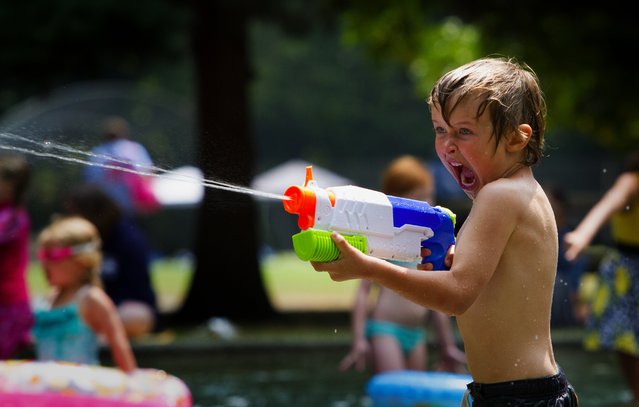 Five-year-old Cian Fitzgerald of West Seattle is full of enthusiasm as he shoots water out of his squirt gun at the Lincoln Park wading pool Tuesday, July 7, 2015. (Photo by Ellen M. Banner/The Seattle Times) 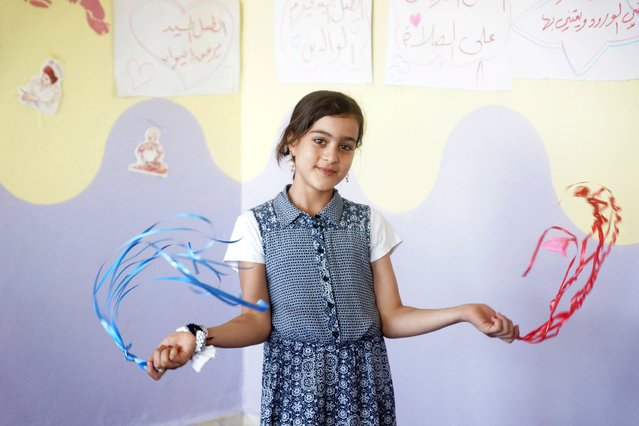 A girl dances during the opening of a psychological support centre for children in Da'el town, north of Deraa, Syria, August 1, 2015. (Photo by Alaa Al-Faqir/Reuters) 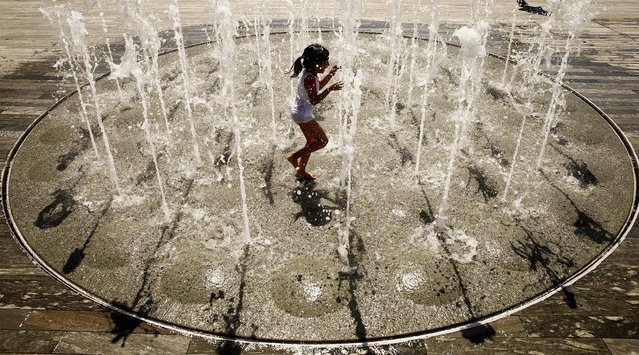 A girl refreshes under a fountain during hot temperatures on Sechselaeutenplatz square in Zurich, August 3, 2015. (Photo by Arnd Wiegmann/Reuters) 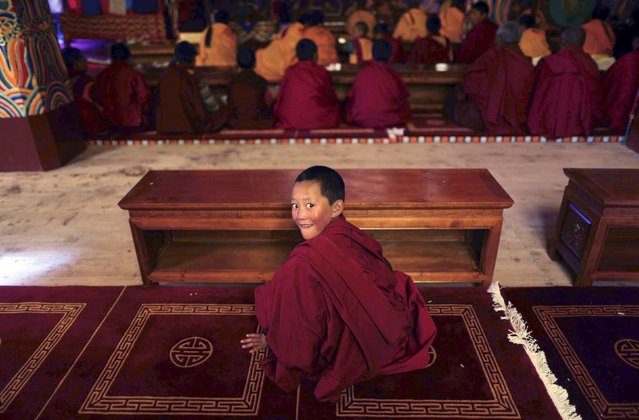 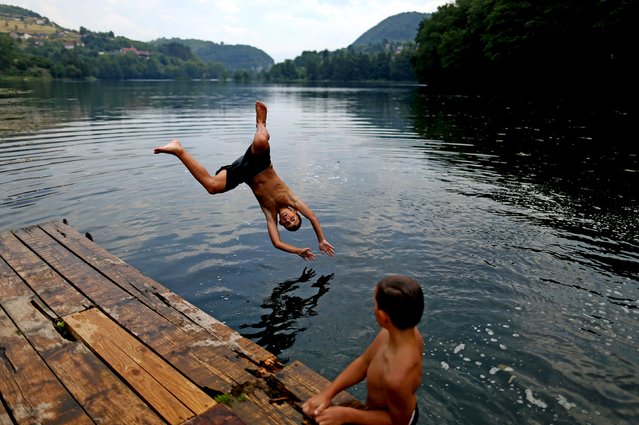 Boys jump into a lake in the central Bosnian town of Jajce, Bosnia and Herzegovina, August 5, 2015. (Photo by Dado Ruvic/Reuters) 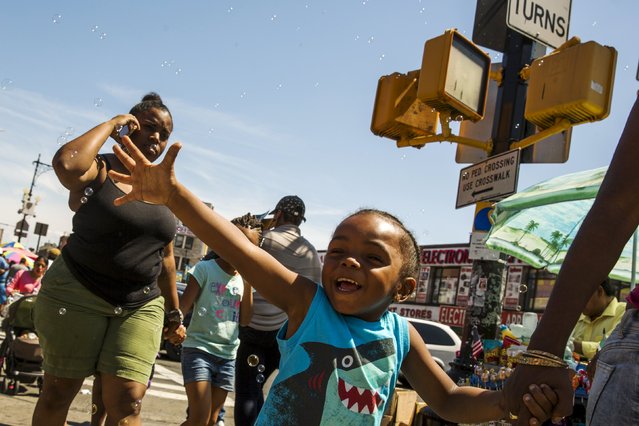 A young child reaches out to touch bubbles being blown on the street in a region of the South Bronx that has seen a deadly outbreak of Legionnaires' disease in New York August 7, 2015. (Photo by Lucas Jackson/Reuters) A girl plays in a water fountain during a hot summer day at Gorky park in Moscow, Russia, August 9, 2015. (Photo by Sergei Karpukhin/Reuters) 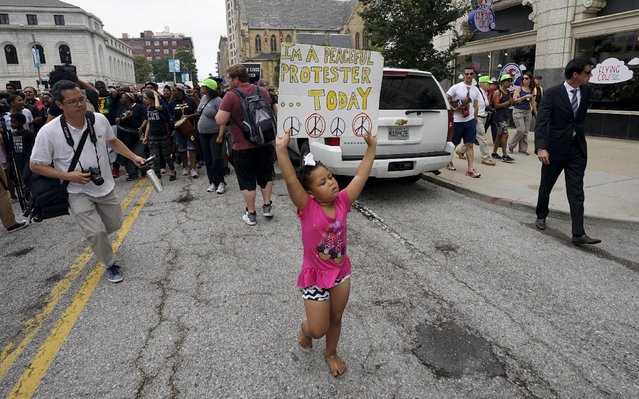 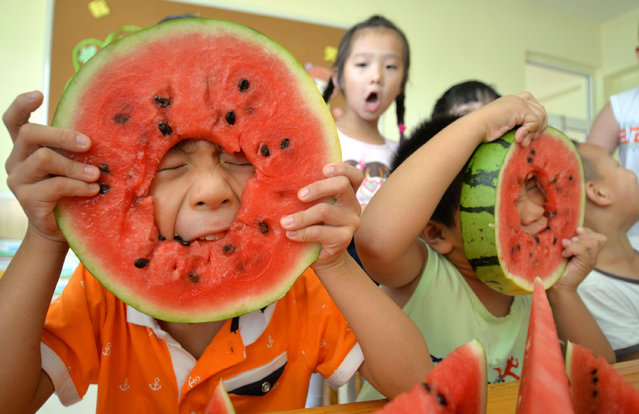 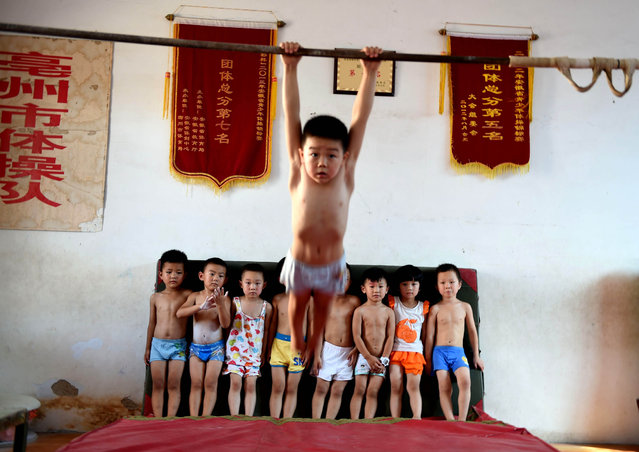 Children practice during a gymnastics summer school on July 28, 2015 in Bozhou, Anhui Province of China. (Photo by ChinaFotoPress/ChinaFotoPress via Getty Images) 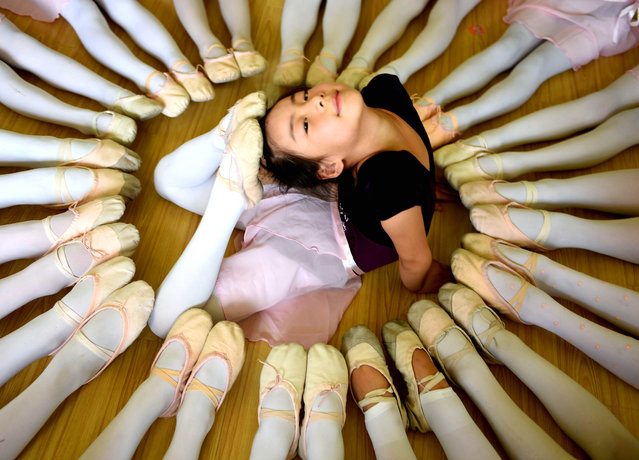 A child practises a move in a dance class in Bozhou, Anhui province, China on August 4, 2015. (Photo by Xinhua/REX Shutterstock) 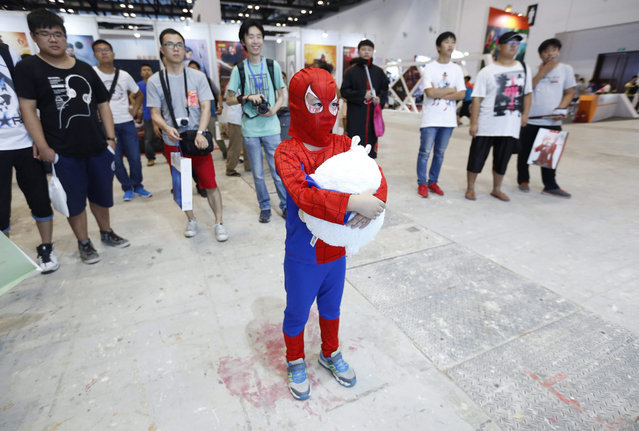 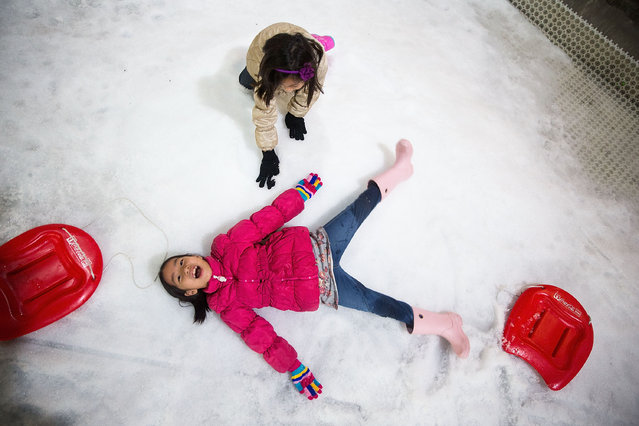 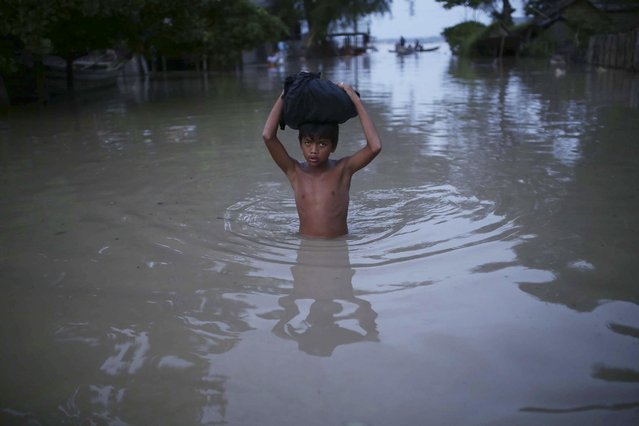 In this August 3, 2015, photo, a boy makes his way through floodwaters in Minbu, Magway division, in Myanmar. (Photo by Hkun Lat/AP Photo) 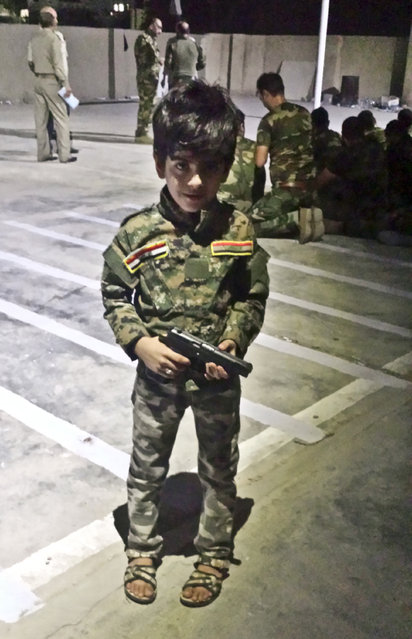 In this Tuesday, July 14, 2015 photo, Abdulhakim, 5, the son of a trainer, holds his father's pistol at a volunteers center for Iraqi militia volunteers in Baghdad, Iraq. The Associated Press has found that militia forces battling the Islamic State group are actively training children under 18 years old. (Photo by Vivian Salama/AP Photo) 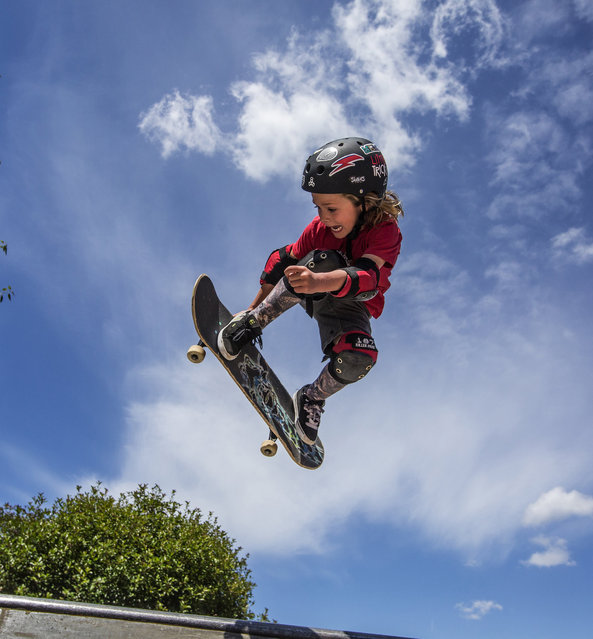 Fox Rio Brunner does a Backside Melon at the Highland Skate Plaza in Bellevue, Wash. “He'll do the same trick all day”, says his dad Jamie. (Photo by Steve Ringman/The Seattle Times/TNS) 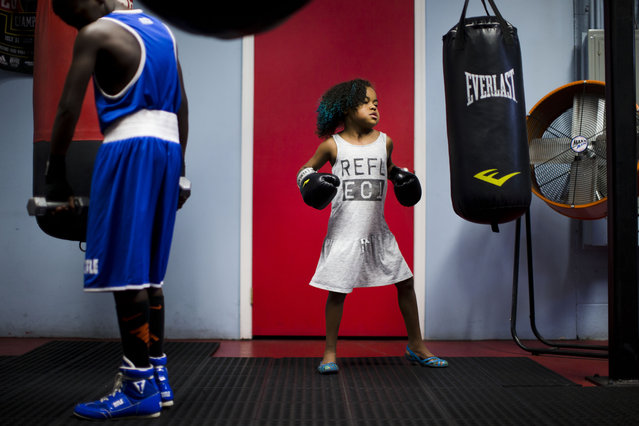 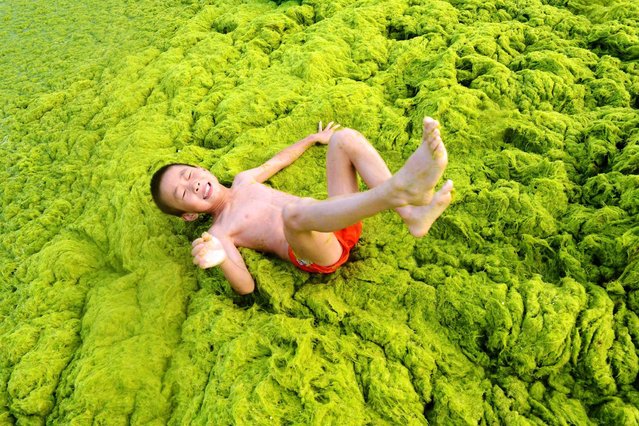 A boy plays on a beach covered by seaweed in Qingdao in eastern China's Shandong province Friday, July 24, 2015. (Photo by Chinatopix/AP Photo) 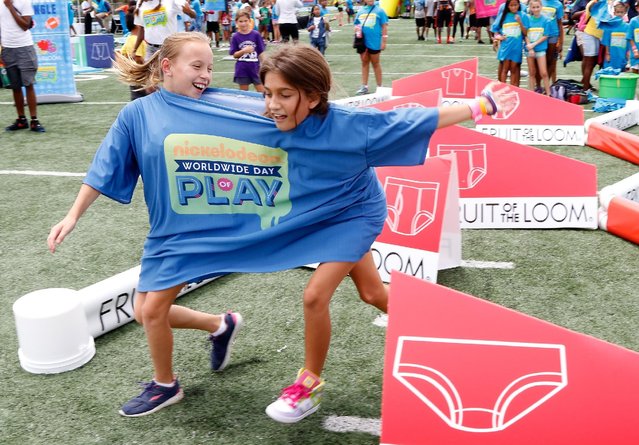 A general view of atmosphere at Nickelodeon's Road To The Worldwide Day Of Play at Betty T. Ferguson Recreation Complex on July 30, 2015 in Miami Gardens, Florida. (Photo by John Parra/Getty Images for Nickelodeon) 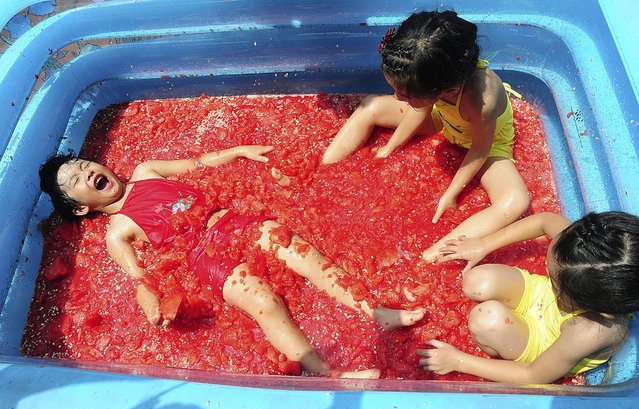