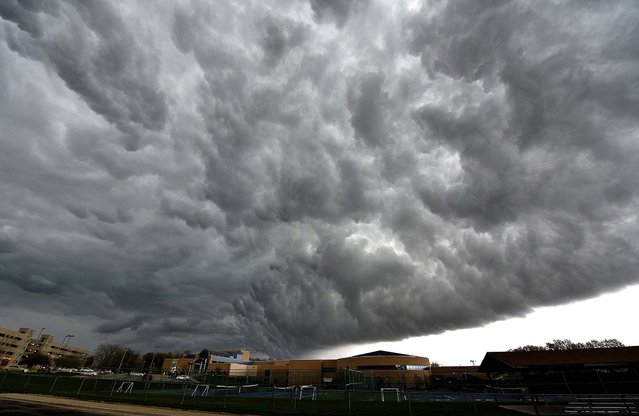 Storm clouds gather over the scene outside the Jewish Community Center in Leawood, Kansas following a shooting, on April 13, 2014. (Photo by John Sleezer/Kansas City Star/MCT) 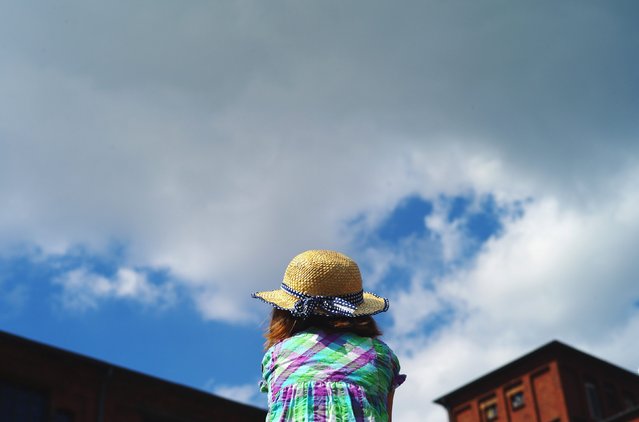 A young girls sits on her father's shoulders as she looks at an old industrial building in Frankfurt, April 13, 2014. (Photo by Kai Pfaffenbach/Reuters) 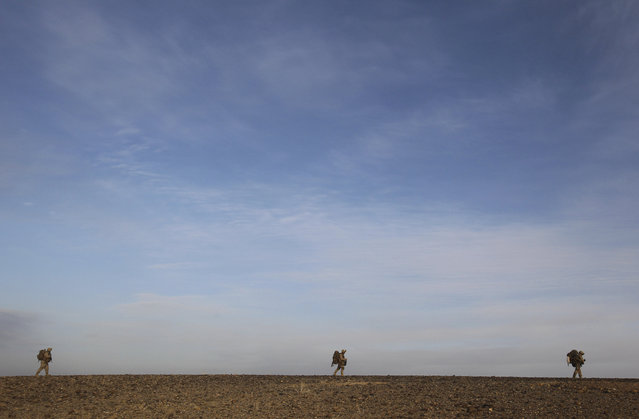 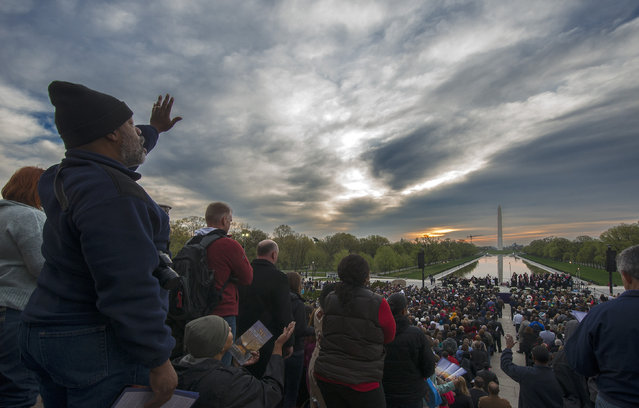 Participants sing hymns as the sun attempts to break through clouds as the Capitol Church leads the 36th annual sunrise Easter service at the Lincoln Memorial on April, 20, 2014 in Washington, DC. (Photo by Bill O'Leary/The Washington Post) 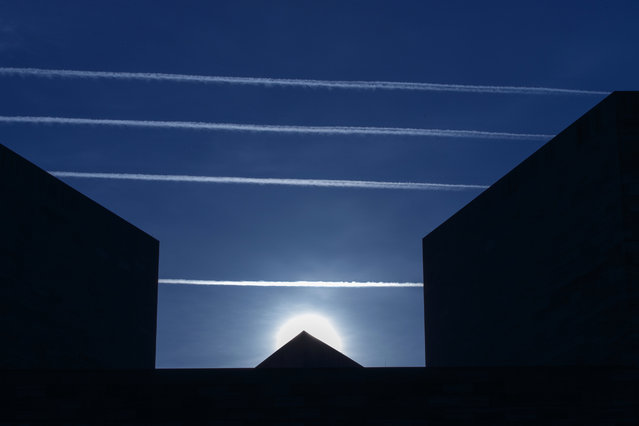 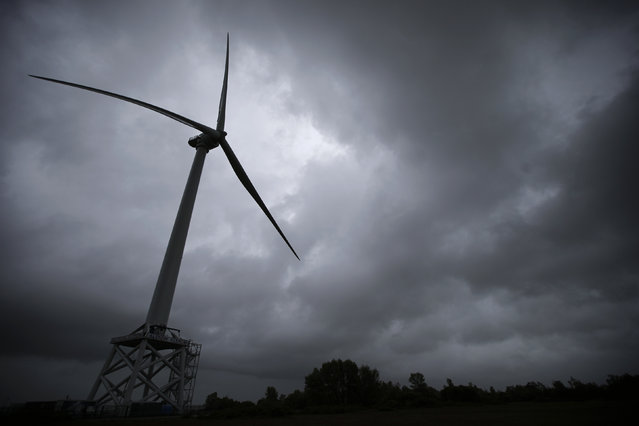 Rain clouds are seen in the sky where a Haliade 150 offshore wind turbine operates at Alstom's offshore wind site in Le Carnet, on the Loire Estuary, near Saint Nazaire, western France, April 27, 2014. U.S. industrial conglomerate General Electric Co is in advanced talks to buy the global power division of struggling French engineering group Alstom for about $13 billion, sources familiar with the matter said on Friday. France's government has said it wants to find alternatives to the GE offer on the turbines and power grid equipment business. (Photo by Stephane Mahe/Reuters) 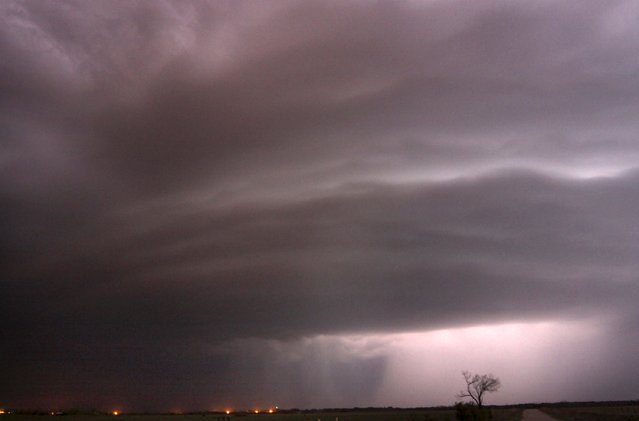 A large TVS (tornadic vortex signature) thunderstorm supercell passes over Newcastle, Texas late April 23, 2014. The thunder storms on Wednesday were a precursor of what's forecast for this coming weekend Saturday, Sunday, and Monday that could be the most significant multi-day tornado outbreak in the U.S. since 2011. (Photo by Gene Blevins/Reuters) 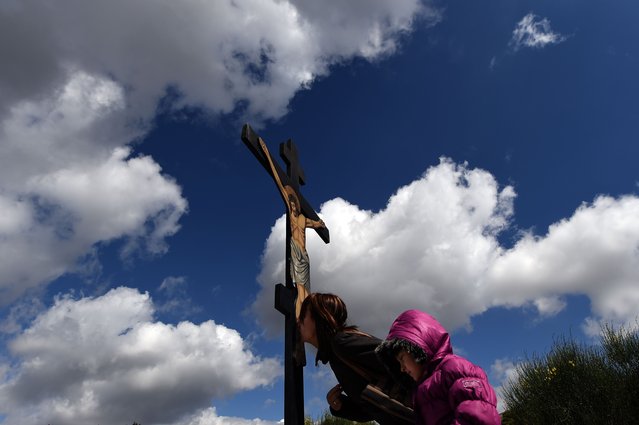 Pilgrims of the Greek Orthodox Church stand in front of an image of Jesus crucified during the ceremony marking the Apokathelosis, the removal of Christ's dead body from the Cross, which forms a key part of Orthodox Easter, in a ceremony at the Church of the Dormition of the Virgin in Penteli, north Athens on April 18, 2014. Millions of Greeks flock to churches around the country this week to celebrate Easter, the country's foremost religious celebration. (Photo by Aris Messinis/AFP Photo) 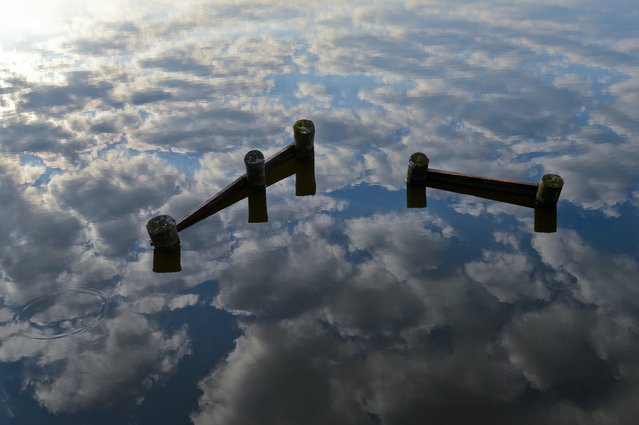 The cloudy sky is reflected in the calm waters of Gross Schauen Lake at Koellnitz fishery in Gross Schauen near Storkow, Germany, 29 April 2014. The remnants of an old jetty protrude from the water. (Photo by Patrick Pleul/EPA) 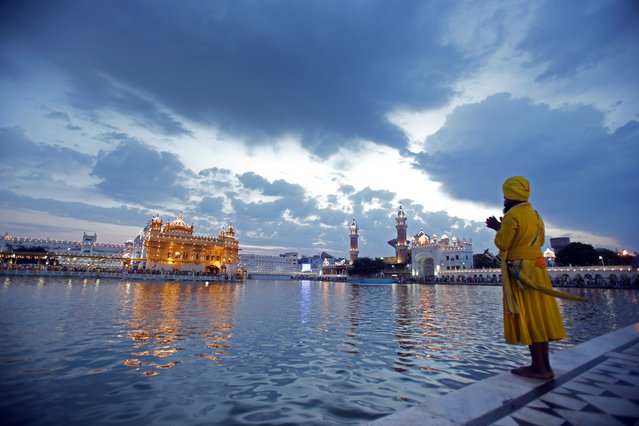 A baptized Sikh man prays in the pre-dawn hours as he visits to pay obeisance at the Golden Temple, the holiest of Sikh shrines, on the occasion of Visakhi festival in Amritsar, India, April 14, 2014. On Visakhi Day of 1699 A.D. Guru Gobind Singh ji, the tenth Sikh Master organized the Sikhs under one order called The 'Khalsa Panth'. The Visakhi festival also marks the beginning of the Sikh New Year. (Photo by Raminder Pal Singh/EPA) 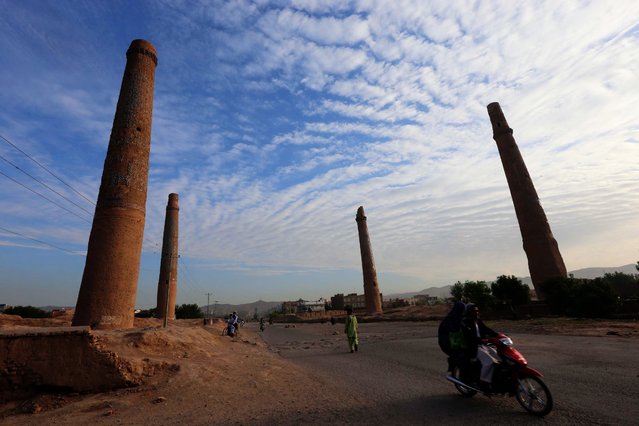 A general view of historial Minaretes of Herat, Afghanistan, 22 April 2014. The United Nations Educational, Scientific and Cultural Organization is funding a project worth around 600,000 USD to preserve the historical Minarete and Queen Guharshad burial ground in Herat. (Photo by Jalil Rezayee/EPA) 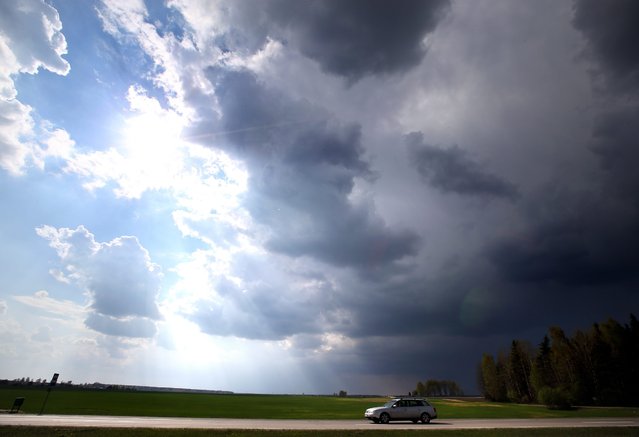 A car on a road appears to move from thunderstorm (R) to sunshine (L) as it drives near the village of Korma, some 30 kilometers from Minsk, Belarus, 22 April 2014. Temperatures reached up to 21 degrees Celsius in the Minsk region on 22 April, exceeding the normal climatic temperature of 5 to 10 degrees Celsius, local media reported. (Photo by Tatyana Zenkovich/EPA) 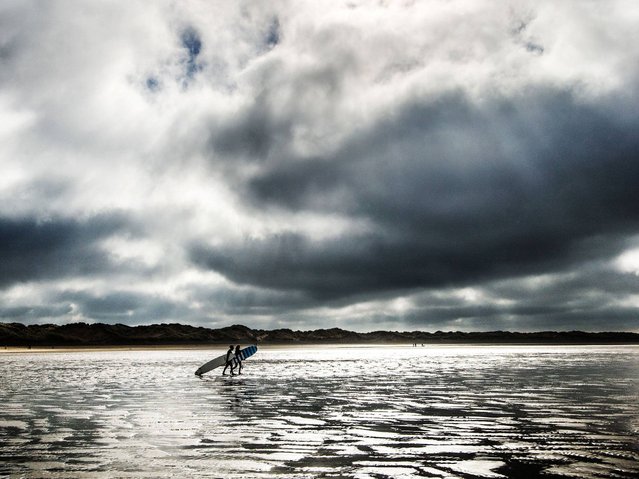 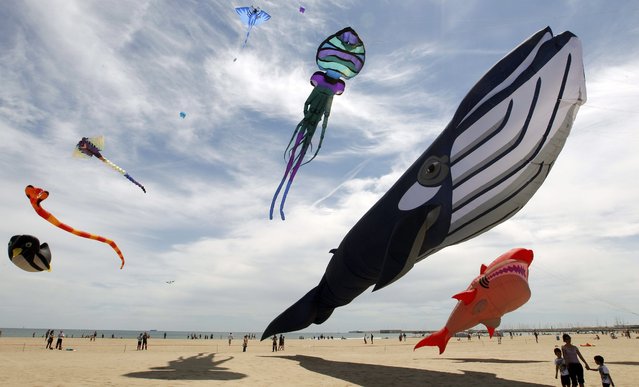 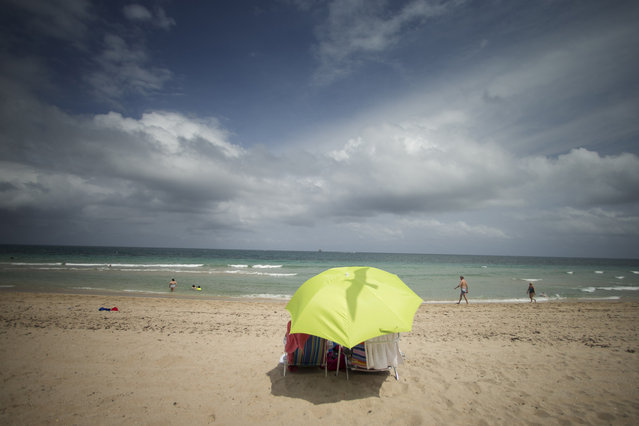 A seagull flies over a couple sunning inside a yellow umbrella on Fort Lauderdale, Fla., beach Wednesday, April 16, 2014, as approaching thunderstorms brew off shore. (Photo by J. Pat Carter/AP Photo) 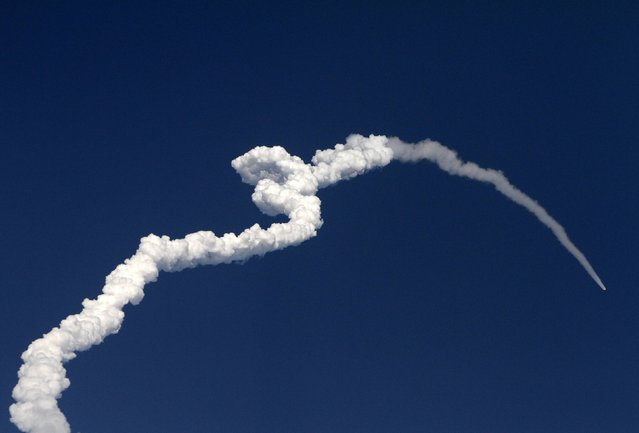 A contrail is seen as India's Polar Satellite Launch Vehicle (PSLV-C24), carrying the second navigation satellite of the Indian Regional Navigation Satellite System IRNSS-1B, lifts off from the Satish Dhawan Space Centre in Sriharikota, about 100 km (62 miles) north of the southern Indian city of Chennai April 4, 2014. (Photo by Reuters/Babu) 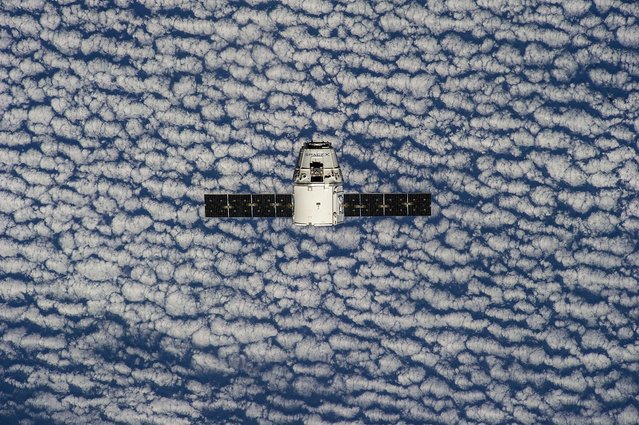 This photo provided by NASA is one of an extensive series of still photos documenting the arrival and ultimate capture and berthing of the SpaceX Dragon capsule at the International Space Station, as photographed by the Expedition 39 crew members onboard the orbital outpost Sunday April 20, 2014. (Photo by AP Photo/NASA)
Edit Del
01 May 2014 10:02:00, post received 0 comments
Publication archive:
←   →
Popular tags:
All tags
Last searches: