Touching Simply Some Photos: In Motion
Movement is the essence and meaning of our life. We feel so much more alive when we are in motion, while people who spend hours motionless tend to have trouble connecting with the outside world. Whether you dive from a high cliff, play your favorite sport, dance at a rave party, or simply walk down a path with autumn leaves rustling under your feet with the love of your life by your side, all those things make your life richer, more beautiful, and more fulfilling. This set of pictures beautifully captures the joy of never-ending motion that enriches our life. 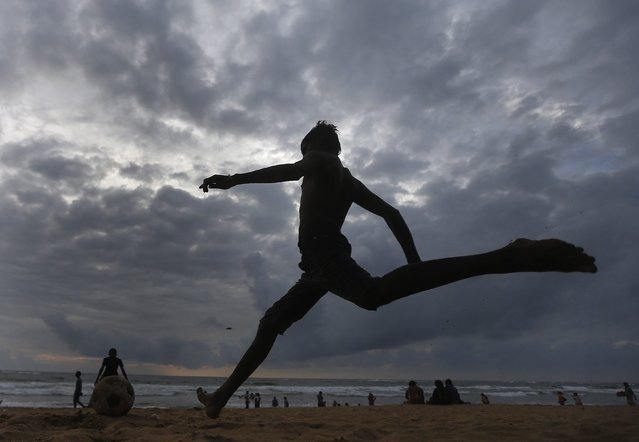 A boy runs to kick a soccer ball on the beach in Colombo September 10, 2014. (Photo by Dinuka Liyanawatte/Reuters) 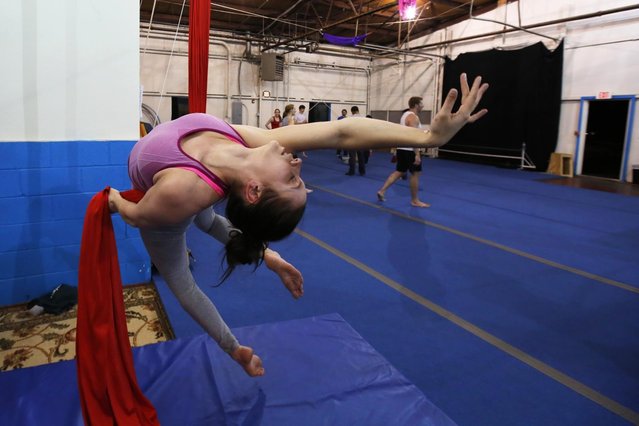 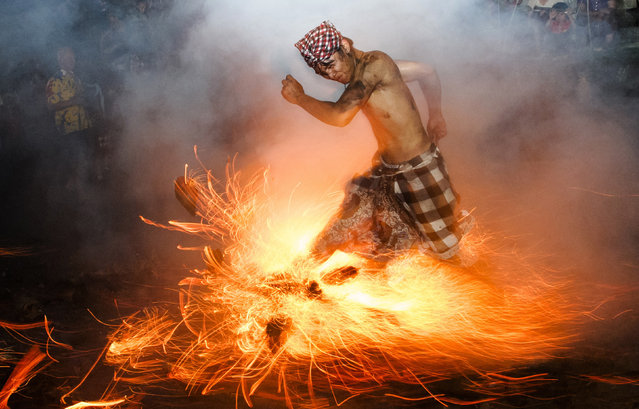 A Balinese man kicks up fire during the “Perang Api” ritual ahead of Nyepi day, which falls on Tuesday in Gianyar on the Indonesian island of Bali March 11, 2013. Nyepi is a day of silence for self-reflection to celebrate the Balinese Hindu new year, where Hindus in Bali observe meditation and fasting, but are not allowed to work, cook, light lamps or conduct any other activities. (Photo by Reuters/Stringer) 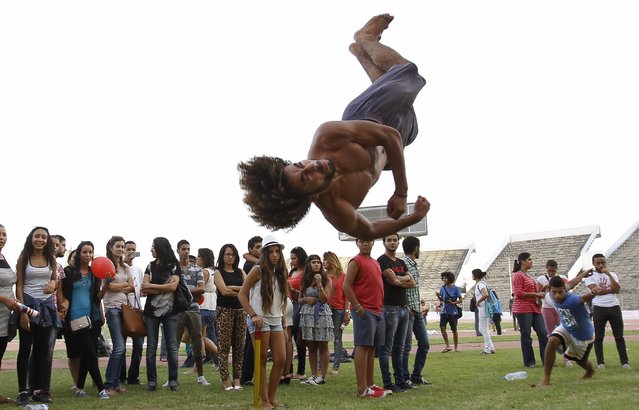 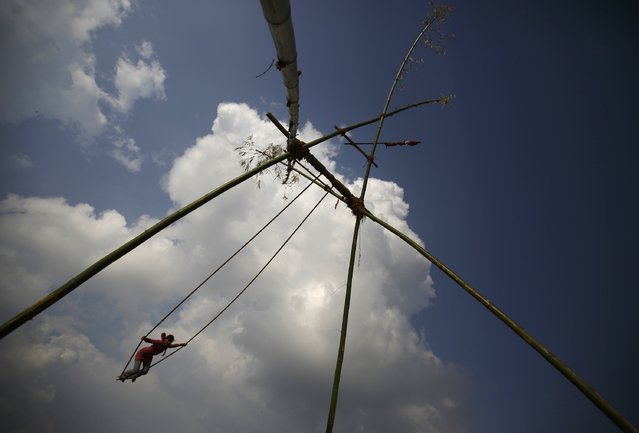 A girl plays on a traditional swing during the Dashain, Hinduism's biggest religious festival, in Kathmandu September 29, 2014. Hindus in Nepal celebrate victory over evil during the festival by flying kites, feasting, playing swings, sacrificing animals and worshipping the Goddess Durga as well as other gods and goddesses, as part of celebrations held throughout the country. (Photo by Navesh Chitrakar/Reuters) 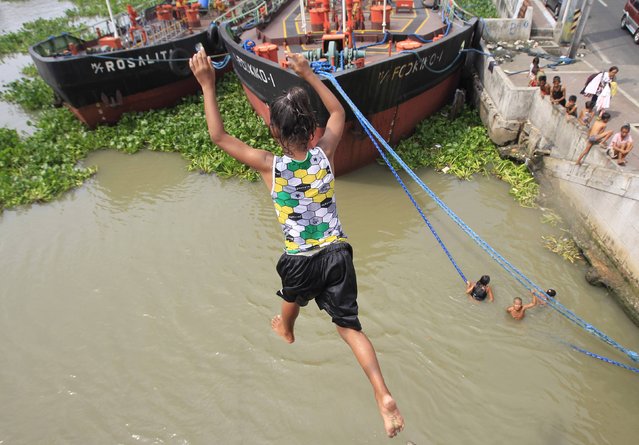 A girl dives in the polluted waters of the Pasig river as she goes for a swim to cool off in Manila October 11, 2014. (Photo by Romeo Ranoco/Reuters) 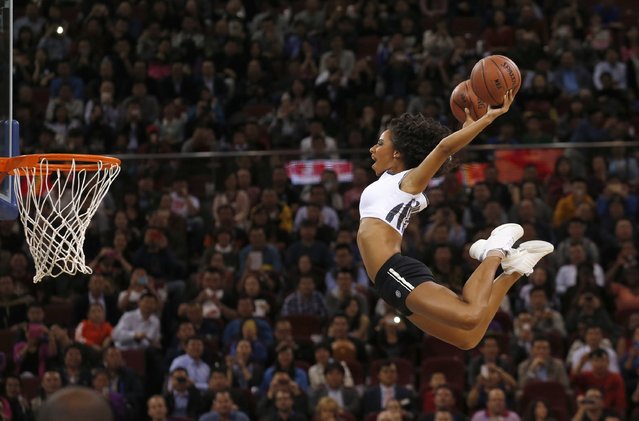 A member of Team Hype jumps to shoot during a performance at the NBA Global Games basketball match between Sacramento Kings and Brooklyn Nets in Beijing October 15, 2014. (Photo by Kim Kyung-Hoon/Reuters) 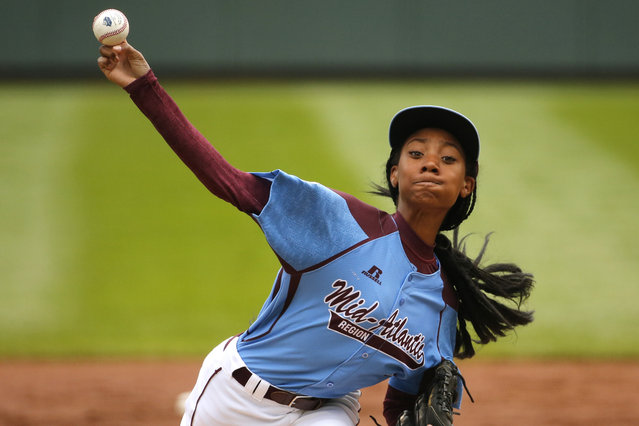 In this August 15, 2014, file photo, Pennsylvania's Mo'ne Davis delivers in the first inning against Tennessee during a baseball game at the Little League World Series tournament in South Williamsport, Pa. Davis is headed to the Baseball Hall of Fame. (Photo by Gene J. Puskar/AP Photo) 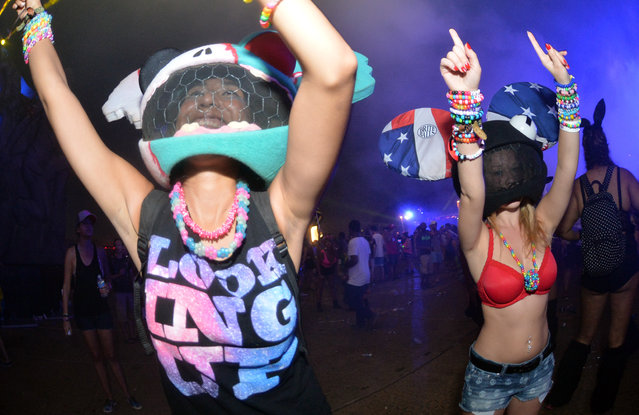 A crowd dances to electronic beats at the TomorrowWorld electronic music festival in Chattahoochee Hills, South of Atlanta, on Saturday, September 27, 2014. The event has been the world's most popular electronic music festival in Europe for years. It takes about three weeks to transform the 350-acres of farm land at Bouckaert Farm in Chattahoochee Hills into the self-contained EDM haven known as TomorrowWorld. (Photo by Hyosub Shin/AJC) 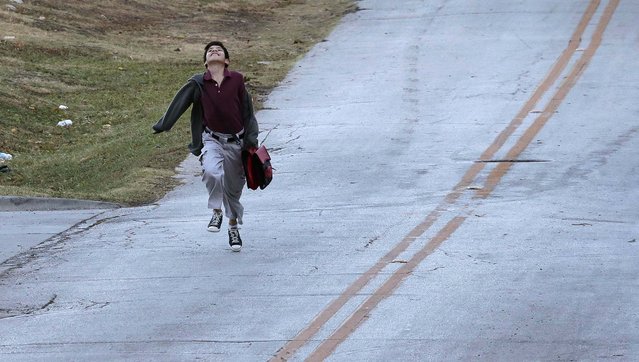 A boy on his way to school, runs down a street next to an apartment complex where an Ebola infected man had stayed in Dallas, Friday, October 3, 2014. Dallas city officials asked the family who resides at the apartment to remain in their home. (Photo by L. M. Otero/AP Photo) 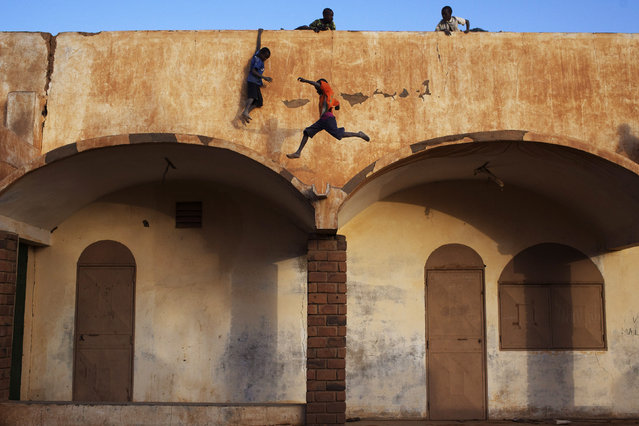 Boys play on the roof of the entrance to a football stadium in Gao February 20, 2013. (Photo by Joe Penney/Reuters) 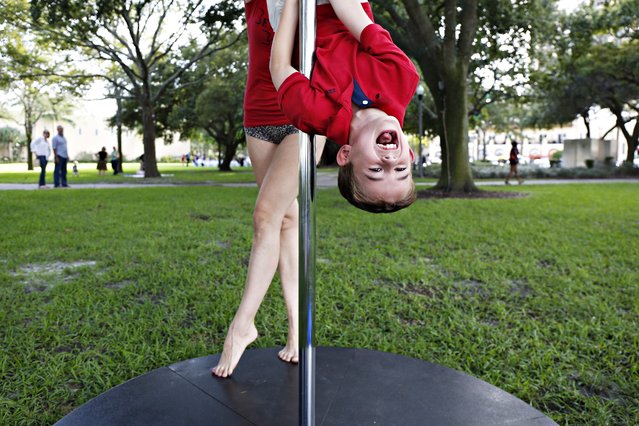 Jeremiah Alvarez, 5, of Brandon, gets some help hanging upside down on a 10-foot fitness pole from Heather Early of St. Petersburg, during a demo day for Impulse Studios in North Sraub Park in St. Petersburg, Fla., Sunday, September 28, 2014. They also had a Lyra and a Fly Gym available for people to try out. (Photo by Melissa Lyttle/AP Photo/Tampa Bay Times) 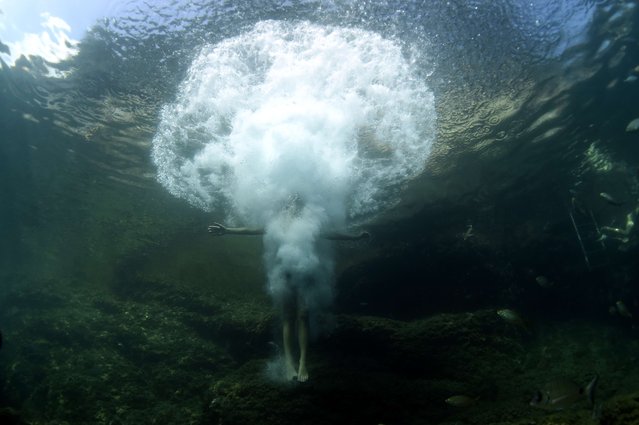