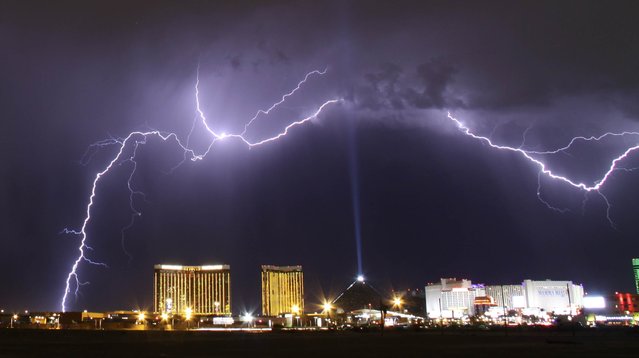 A monsoon lightning storm strikes over the Mandalay Bay Resorts and Casino and Luxor hotels in Las Vegas, Nevada late July 7, 2014. Monsoon storms are forecast for the the rest of the week in the Nevada and Arizona states. The Luxor Sky Beam can be seen shining into the sky from the top of the hotel's pyramid structure. (Photo by Gene Blevins/Reuters) 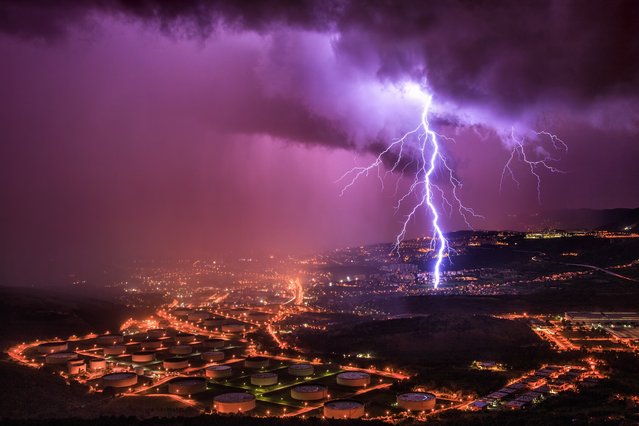 There may be a heatwave in the UK, but other parts of Europe have been hit by massive thunderstorms. Electric lightning bolts illuminated the stormy skies of Italy, cracking through the clouds to strike the ground below. (Photo by Marko Korosec/Solent News & Photo Agency) 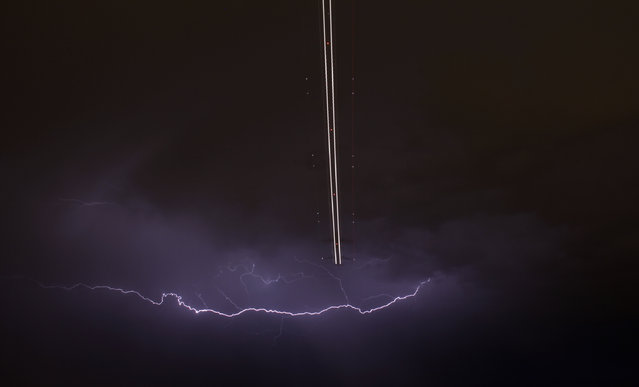 A jet aircraft takes off as lightning strikes across the sky during a monsoon storm at McCarran International Airport in Las Vegas, Nevada July 7, 2014. (Photo by Gene Blevins/Reuters) 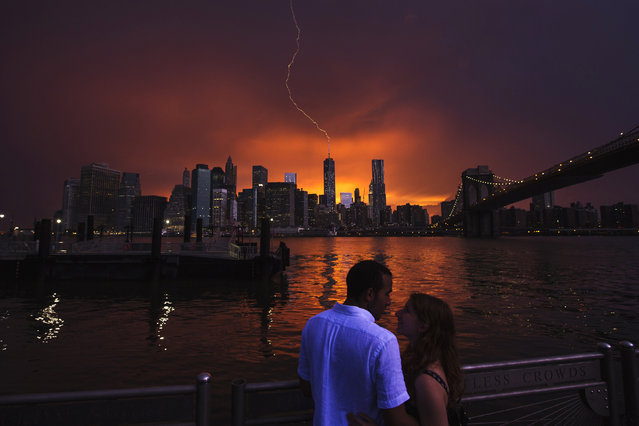 Joseph Rojas and Abigail Zolotarsky embrace as lightning strikes One World Trade Center in Manhattan during sunset after a summer storm in New York July 2, 2014. (Photo by Lucas Jackson/Reuters) 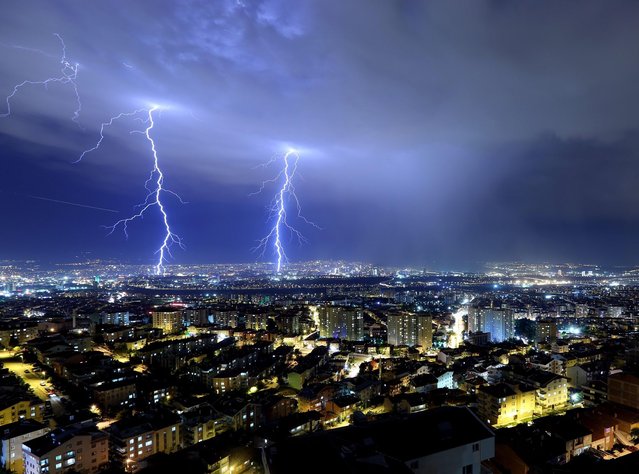 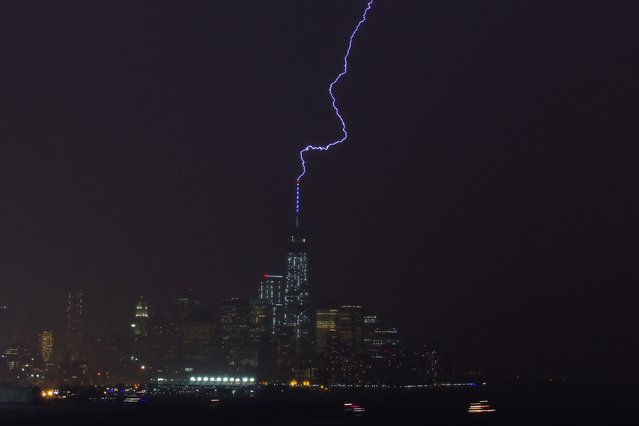 Lightning strikes One World Trade Center in Manhattan as it is seen from Weehawken during a summer storm over New York, July 14, 2014. (Photo by Eduardo Munoz/Reuters) 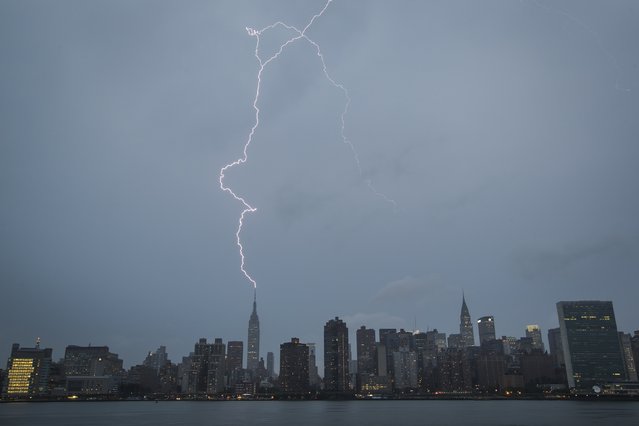 A bolt of lightning strikes the Empire State Building during a summer rain storm in New York July 15, 2014. (Photo by Lucas Jackson/Reuters) 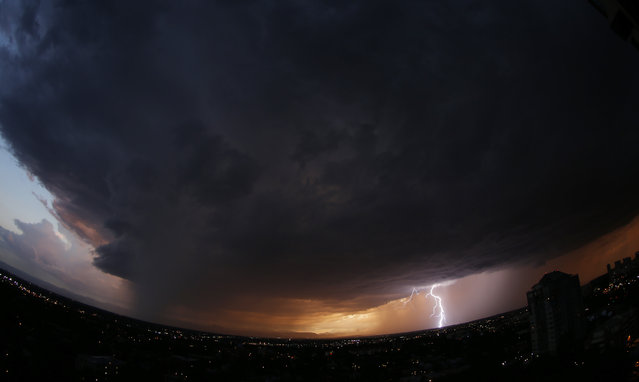 In this photo taken with a fisheye lens, a massive storm cloud packing high winds, hail and heavy rains sweeps over downtown Denver as lightning strikes on the horizon on Monday, July 7, 2014. After a daytime high that reached 100 degree, forecasters predict that heavy thunderstorms will envelop Colorado's Front Range communities through the night. (Photo by David Zalubowski/AP Photo) 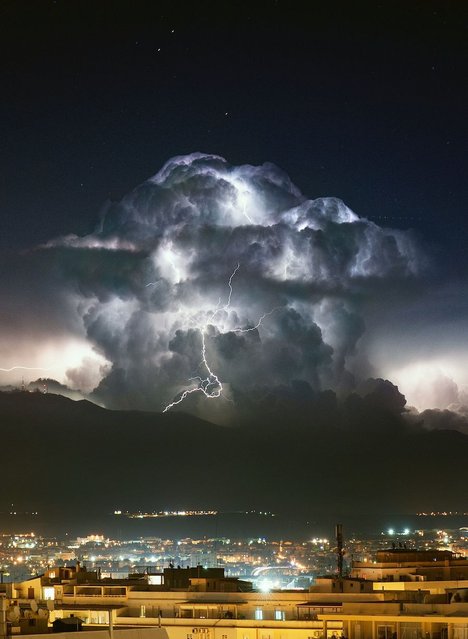 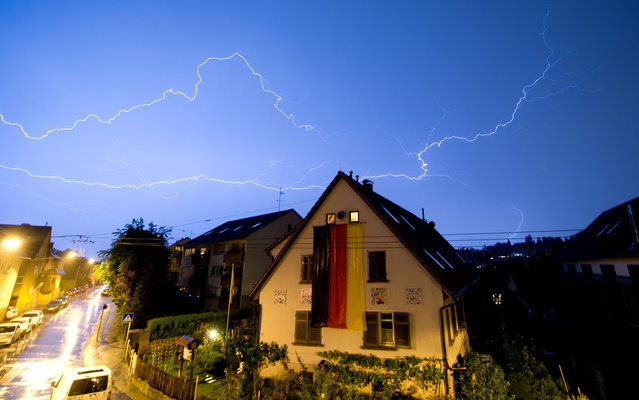 In this picture made available July 8, 2014 lightning flashes over the city of Stuttgart, Germany, Monday, July 7, 2014. (Photo by Sebastian Kahnert/AP Photo/DPA) 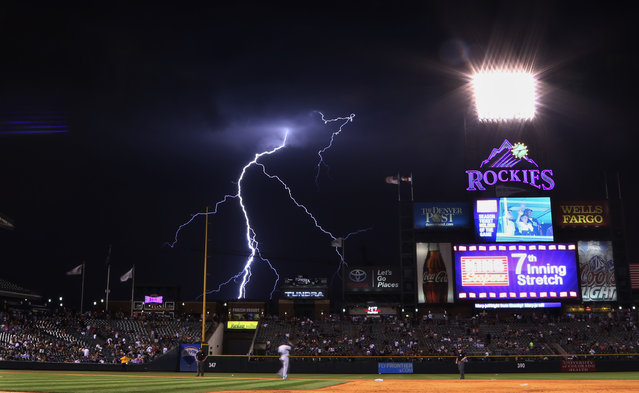 Lightning strikes in the background during the seventh inning of a baseball game between the Colorado Rockies and the San Diego Padres on Monday, July 7, 2014, in Denver. (Photo by Jack Dempsey/AP Photo)

Lightning strikes early Monday morning, July 7, 2014, north of Gillette, Wyo. According to the National Weather Service, there was about of 0.08 inches of precipitation and the forecast is predicting more showers and thunderstorms throughout the week. (Photo by Daniel Brenner/AP Photo/Gillette News Record) 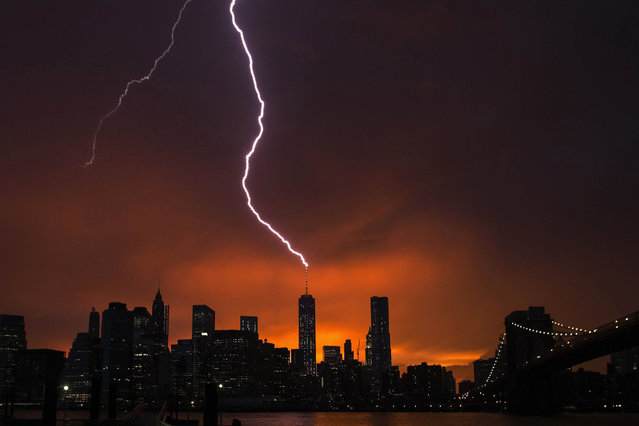 Lightning strikes One World Trade Center in Manhattan as the sun sets behind the city after a summer storm in New York, on Jule 3, 2014. (Photo by Lucas Jackson /Reuters) 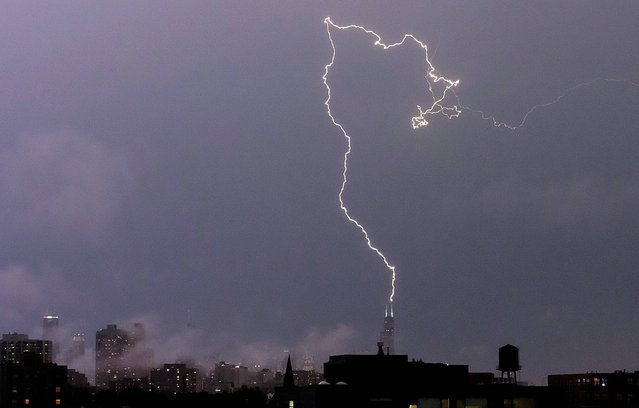 A bolt of lightening strikes near the top of the Willis tower in downtown Chicago, Monday, June 30, 2014, as rain and high winds were moving into Illinois from Iowa. Some flights are canceled at Chicago's O'Hare International Airport as northern Illinois braces for severe�weather. (Photo by Kiichiro Sato/AP Photo) 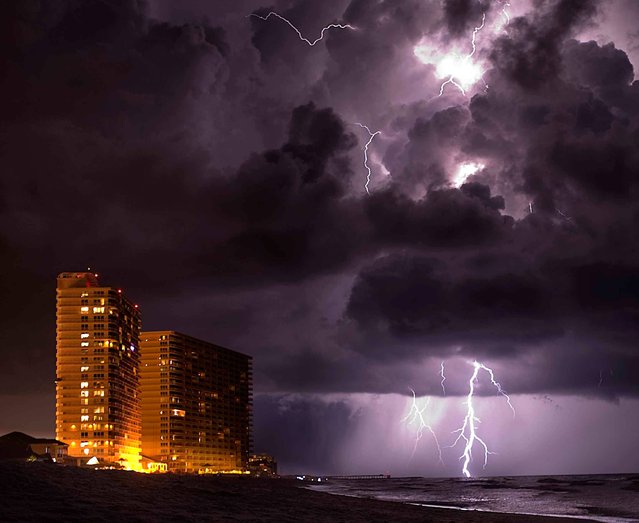 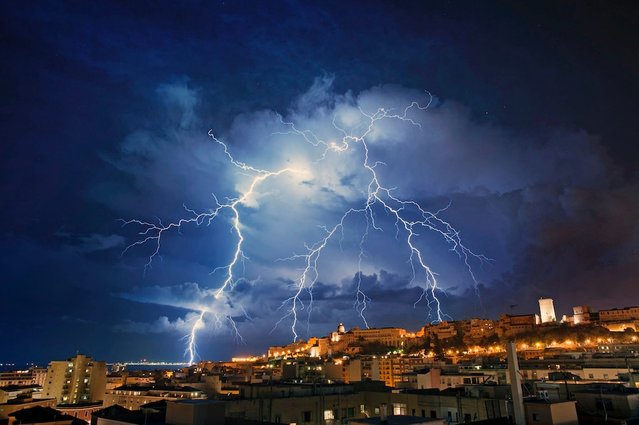