Touching Simply Some Photos: Man in the Landscape 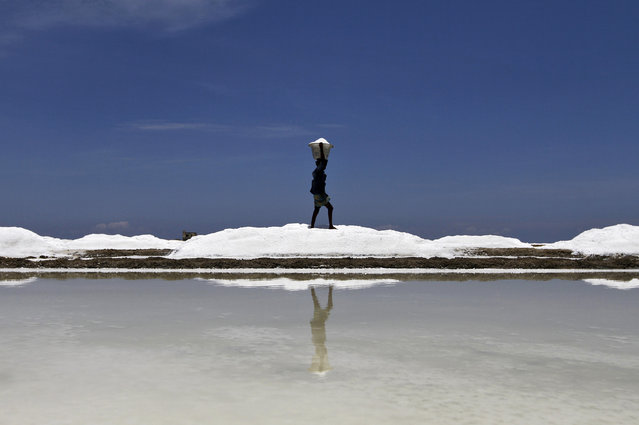 A worker carries salt before loading it onto a supply truck at a salt pan on the eve of May Day or Labour Day on the outskirts of the southern Indian city of Chennai April 30, 2014. (Photo by Reuters/Babu) 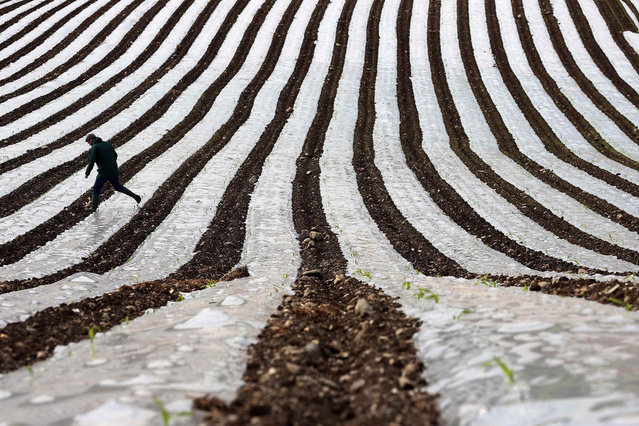 A man walks through a field of maize, planted under a film of biodegradable plastic which raises the soil temperature at the start of the season, near the city of Londonderry May 19, 2014. (Photo by Cathal McNaughton/Reuters) 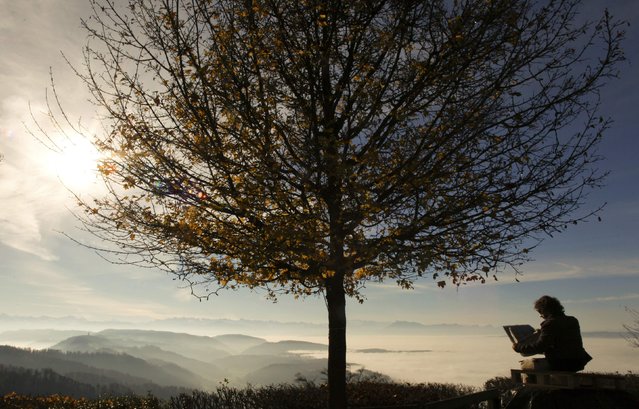 A man reads a newspaper under a tree during sunny autumn weather on a look-out on Mount Uetliberg (871 metres/2850 ft) in Zurich November 22, 2014. (Photo by Arnd Wiegmann/Reuters) 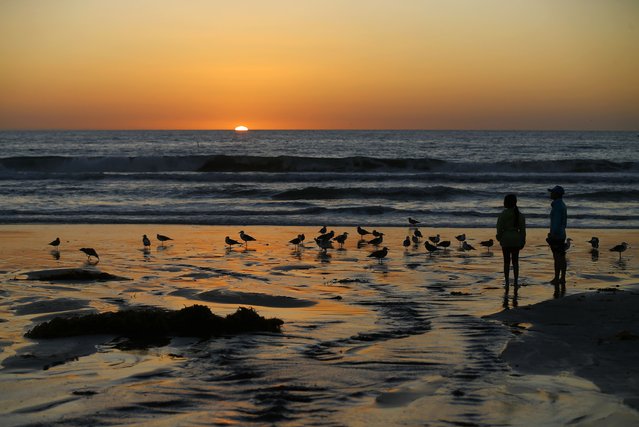 Kids look at seabirds as the sun sets from Moon Light Beach in Encinitas, California October 28, 2014. (Photo by Mike Blake/Reuters) 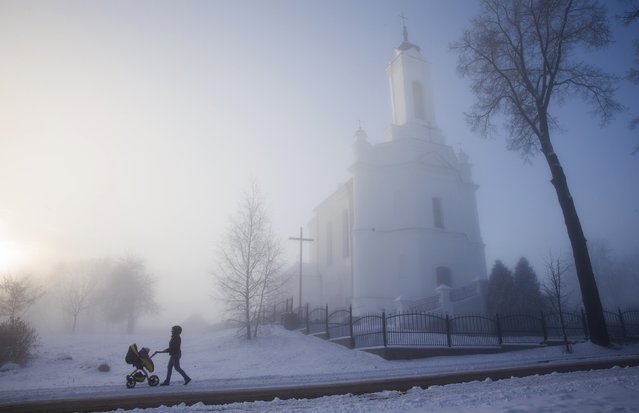 A woman pushes a pram with a child as heavy fog covered streets in a small town of Zaslavl, northwest of Minsk, December 10, 2014. (Photo by Vasily Fedosenko/Reuters) 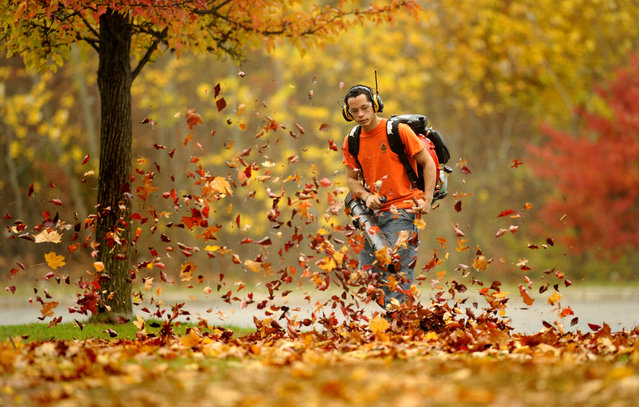 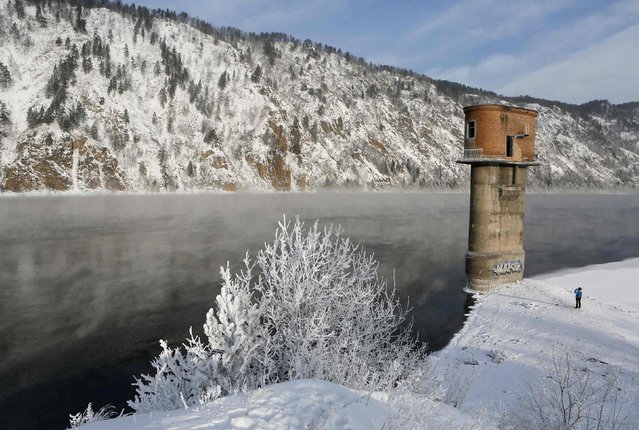 A woman takes a picture of an abandoned pump tower on the bank of the Yenisei River, with the air temperature at about minus 30 degrees Celsius, outside the Russian Siberian city of Krasnoyarsk, January 27, 2015. (Photo by Ilya Naymushin/Reuters) 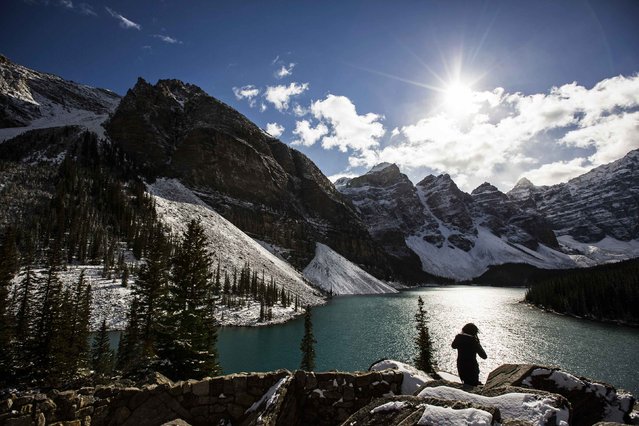 A woman looks over Moraine Lake in Banff National Park, in the Canadian Rocky Mountains outside the village of Lake Louise, Alberta, October 2, 2014. (Photo by Mark Blinch/Reuters) 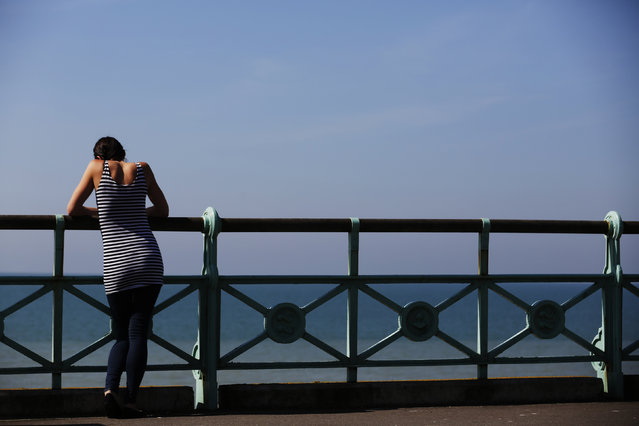 A woman looks out to sea in the sunny weather on Brighton beach in southern England May 16, 2014. (Photo by Luke MacGregor/Reuters) 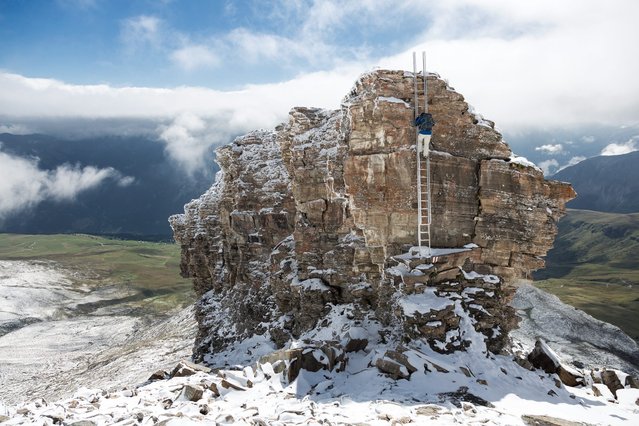 A mountaineer climbs up a ladder on Piz Beverin mountain (2998m) near Mathon above Val Schons in canton Grisons, Switzerland, 02 September 2014. (Photo by Arno Balzarini/EPA) 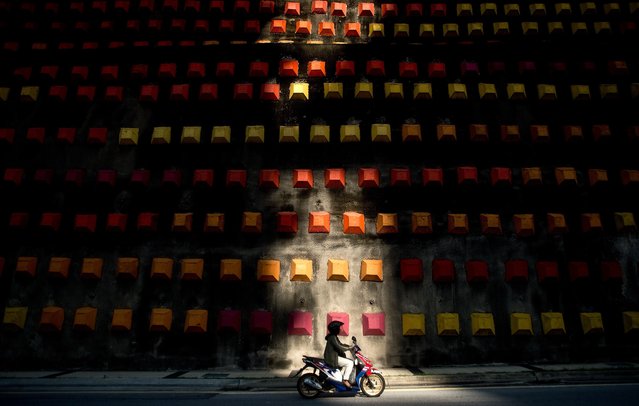 A motorist rides to work past a decorated wall in Kuala Lumpur on May 6, 2014. According to a Michingan University report earlier this year, Malaysia is ranked among the top 20 most dangerous countries for road users. (Photo by Manan Vatsyayana/AFP Photo) 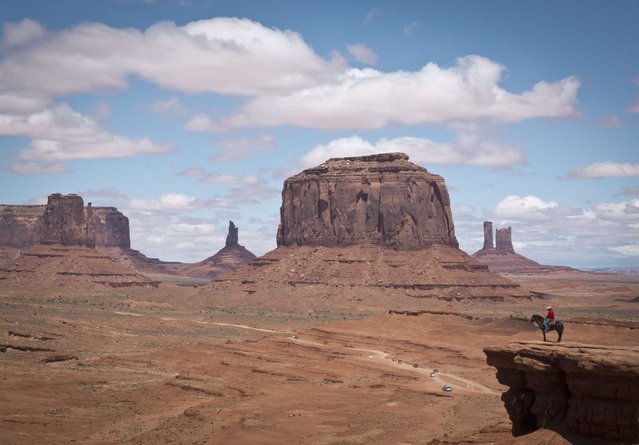 A Navajo man on a horse poses for tourists in front of the Merrick Butte in Monument Valley Navajo Tribal park, Utah, on May 12, 2014. Monument Valley has been featured in many Westerns since the 1930s, including director John Ford's best-known movies and has become the epitome of the American West. (Photo by Mladen Antonov/AFP Photo) 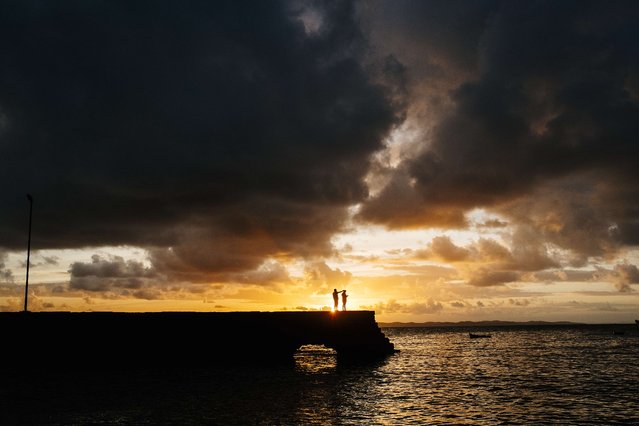 Tourists take a “selfie” during sunset in Salvador, Brazil, on June 18, 2014. (Photo by Dimitar Dilkoff/AFP Photo) 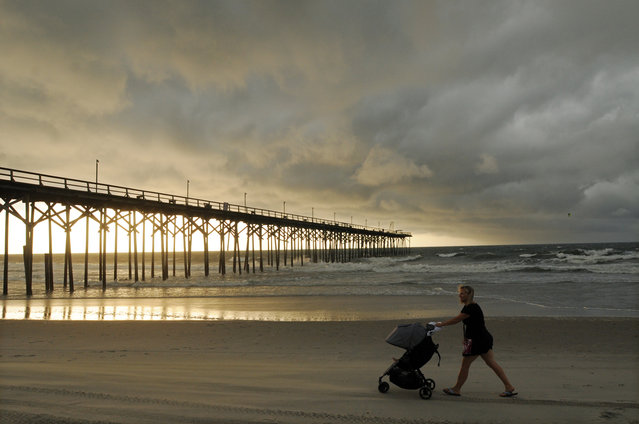 Clouds and rains move in as beachgoers walk along the shore of the north end of Carolina Beach, N.C., Thursday, July 3, 2014. (Photo by Mike Spencer/AP Photo/Wilmington Star-News) 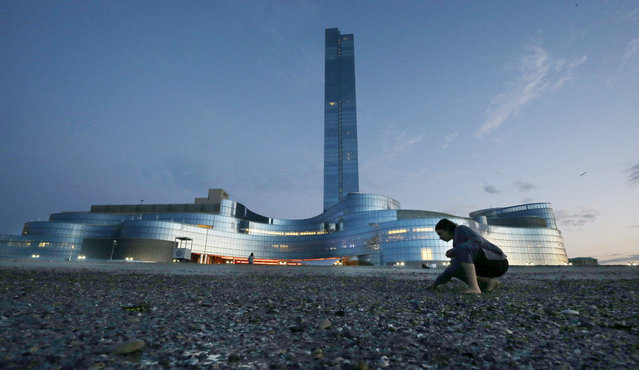 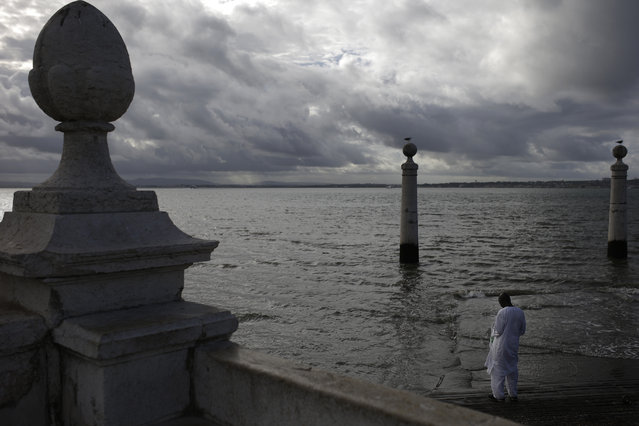 A muslim man prays at the Cais das Colunas dock by the Tagus riverbank, in Lisbon, Monday, November 3, 2014. (Photo by Francisco Seco/AP Photo) 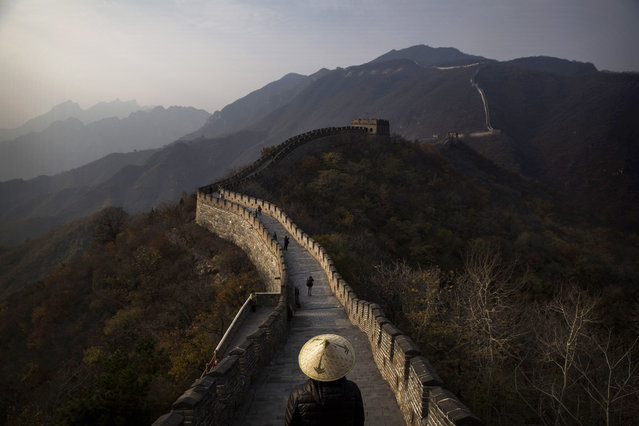 Chinese and foreign toursits walk on a section of the Great Wall of China on October 28, 2014 in Mutianyu, near Beijing, China. (Photo by Kevin Frayer/Getty Images) 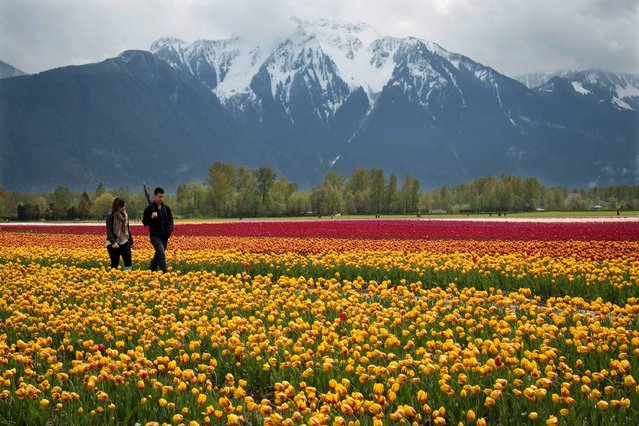 A couple walk along a row of tulips during the Tulips in the Valley Festival in Agassiz, B.C., Canada, Sunday, April 27, 2014. (Photo by Jonathan Hayward/AP Photo/The Canadian Press) 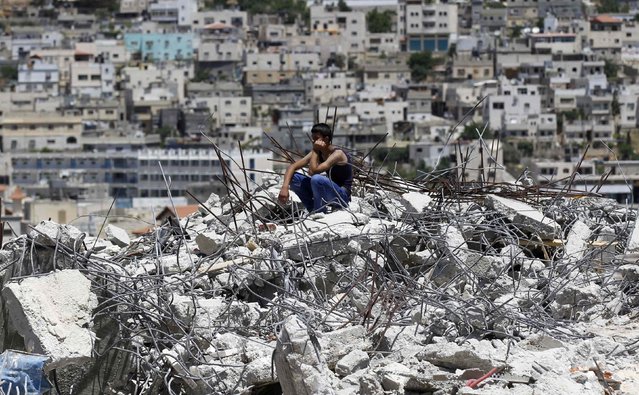 A Palestinian sits on top of the rubble of a house under construction after it was demolished by Israeli bulldozers at Al-Aroub refugee camp, near the West Bank City of Hebron April 30, 2014. (Photo by Ammar Awad/Reuters) 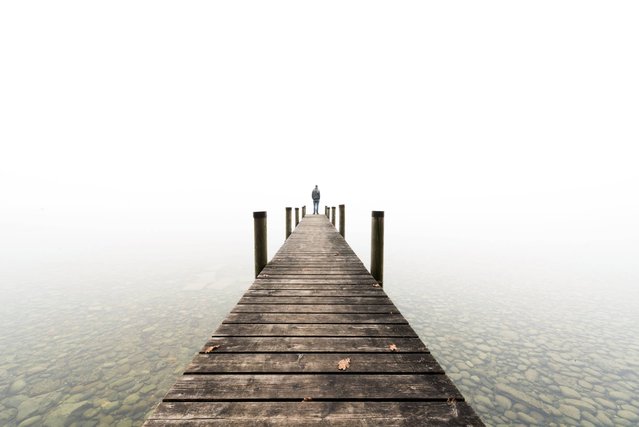 A man stands at the end of a landing stage during morning mist at lake Starnberg, southern Germany, Tuesday, November 11, 2014. (Photo by Andreas Weihmayr/AP Photo/DPA) 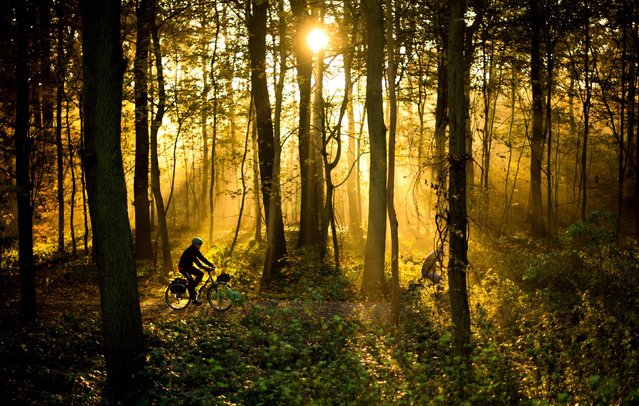 Cyclists ride their bikes through a forest during sunrise in Hannover, northern Germany, Tuesday, November 11, 2014. (Photo by Julian Stratenschulte/AP Photo/DPA) 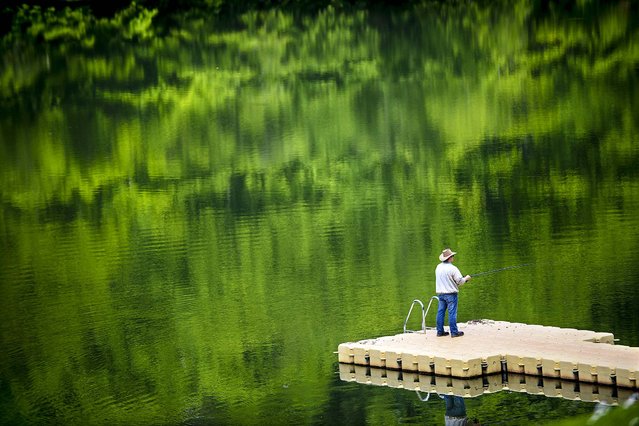 An angler stands on a bathing platform at lake Twistesee where the green surroundings is reflected near Wetterburg, central Germany, on May 19, 2014. (Photo by Uwe Zucchi/DPA) 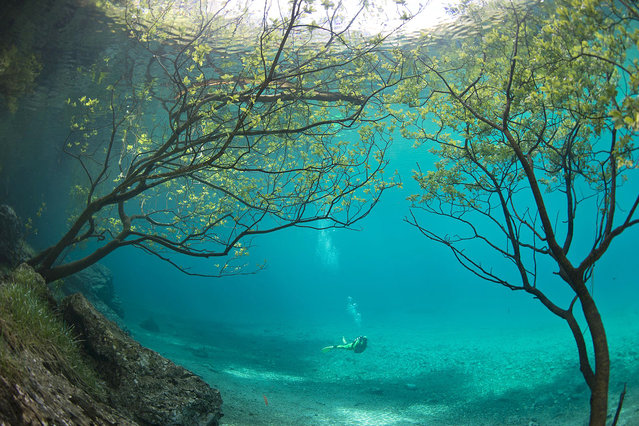 Spectacular images that show how a summer park becomes a lake each spring complete with underwater trees have been captured by two divers. The snaps were taken at the Gruener See, or Green Lake as it is called in English, located in the southern Austrian province of Styria. During the summer and late winter the lake, located near the town of Tragoss at the foot of the snow-capped Hochschwab mountains, is only around a metre deep and the surrounding area is part of the country park. (Photo by Harald Hois/Europics) 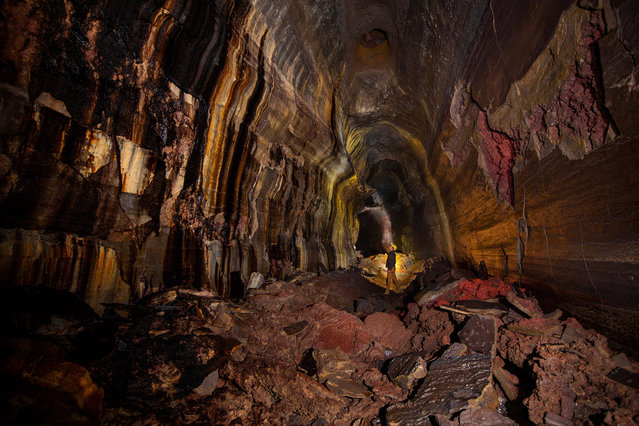 A deep passage of caves hidden hundreds of feet beneath the US reveal a hole new world. The spectacular network of lava tubes display a kaleidoscope of colour stretching 2.4 miles under Washington state. They were formed thousands of years ago as lava tube-forming flows stacked on top of each other inside a deep canyon. (Photo by Josh Hydeman/Caters News/SIPA Press) 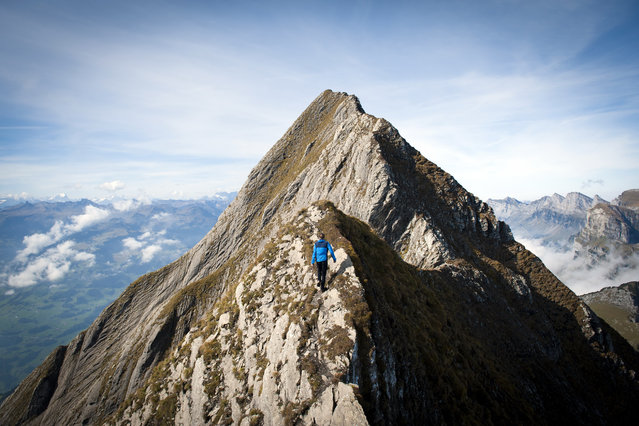