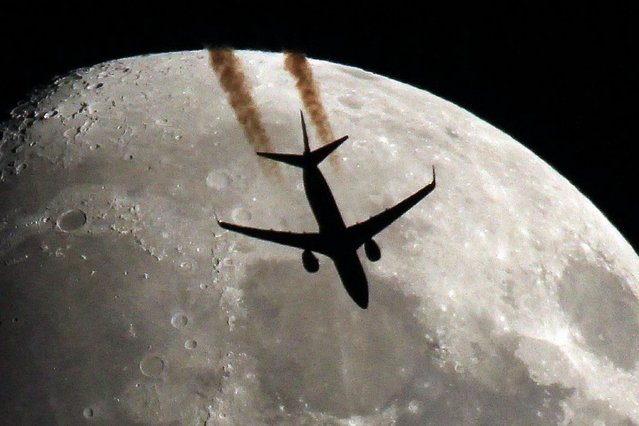 This plane looks like it's bound for the moon as it shoots across the sky. Photographer Sebastien Lebrigand was impressed he could even see the lights on the jet's wings in this stunning silhouette. (Photo by Sebastien Lebrigand/Solent News) 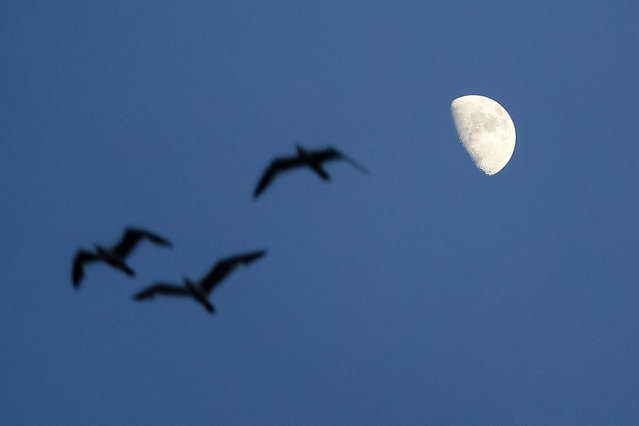 Seagulls fly over the Black Sea port of Odessa, May 8, 2014. (Photo by Gleb Garanich/Reuters) 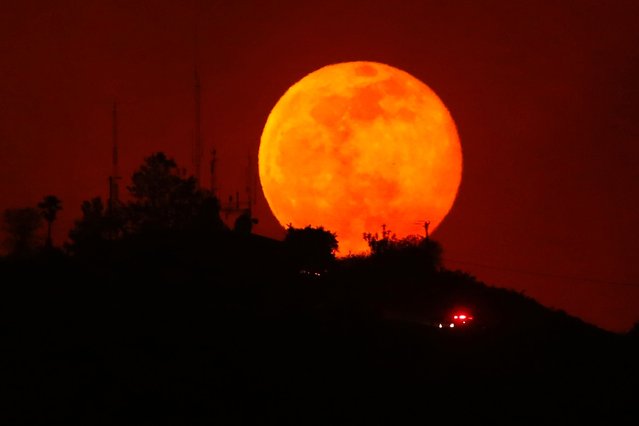 An emergency vehicle makes is way past a rising moon as it travels along a burned-out hillside near San Marcos, California. (Photo by Mike Blake/Reuters) 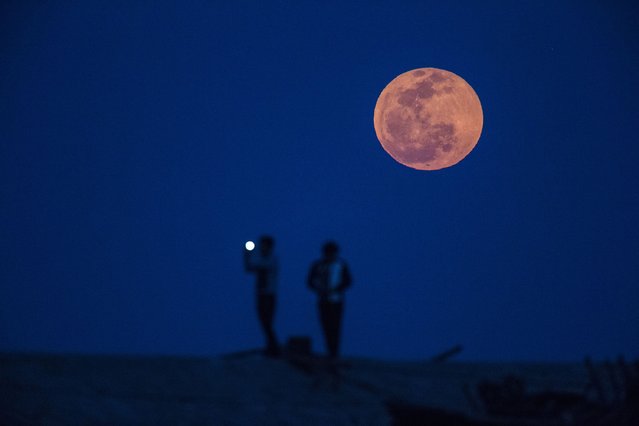 A man takes a picture during moon rise in a suburb of Shanghai April 15, 2014. (Photo by Aly Song/Reuters) 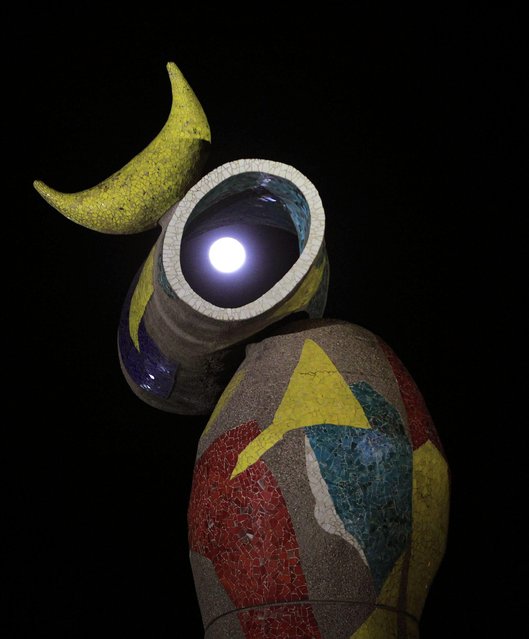 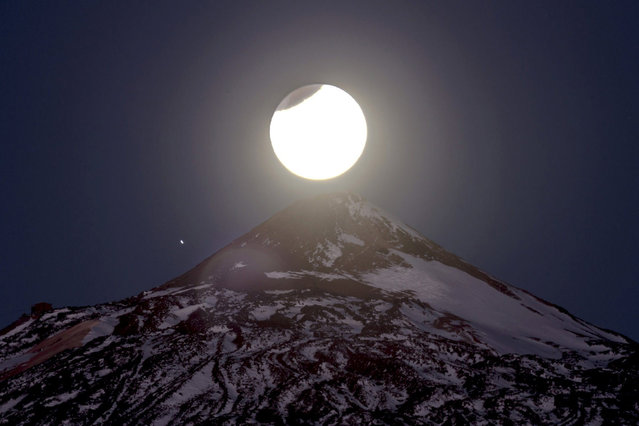 A handout image provided by the Canary Islands' Astrophysical Research Institute (IAC, as in Spanish) on 15 April 2014 shows the first of four full lunar eclipses which will take place at six months intervals, in Tenerife, Canary Islands, Spain, 15 April 2014. (Photo by Daniel Lopez/EPA/IAC) 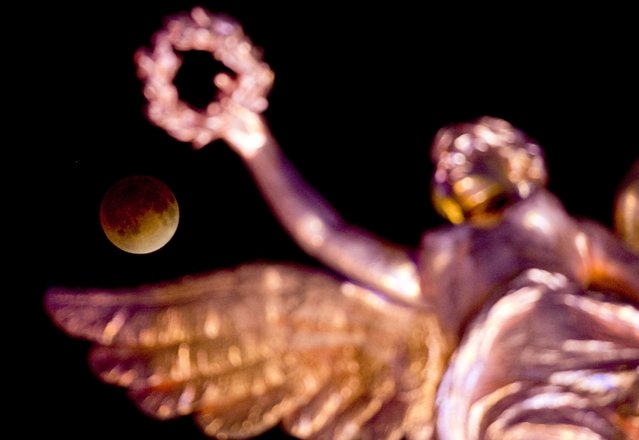 This picture taken on April 14, 2014 shows the moon over the Independence Monument in Mexico city. On April 15, a total lunar eclipse will occur – and seen throughout North and South America – the first in a series of four eclipses to take place between now and 2015, with an interval of six months between each phenomenon what scientists call “tetrad” – for the first time since December 2011. The phenomenon will occur again in 2032–2033 and in total will be eight tetrads throughout the XXI century, according to NASA. (Photo by Alfredo Estrella/AFP Photo) 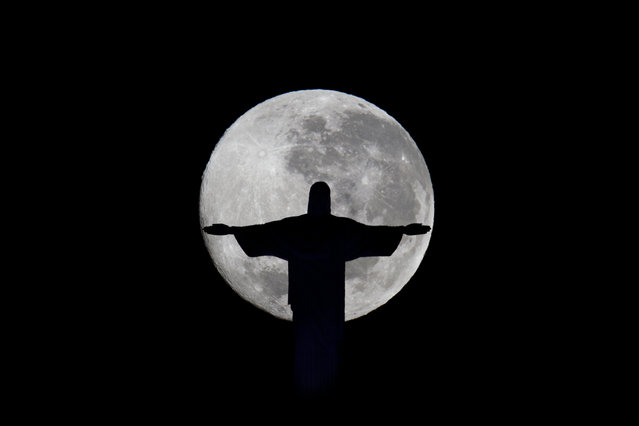 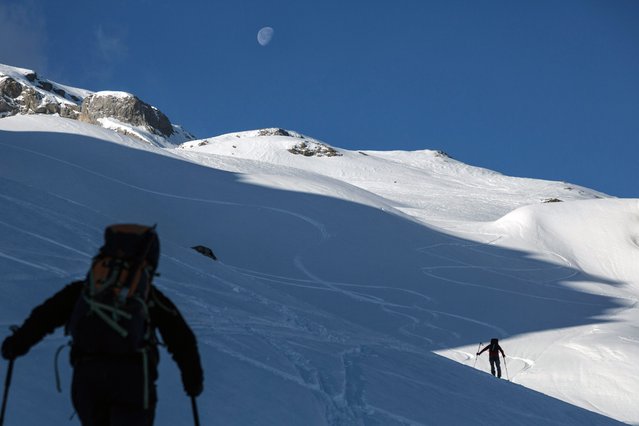 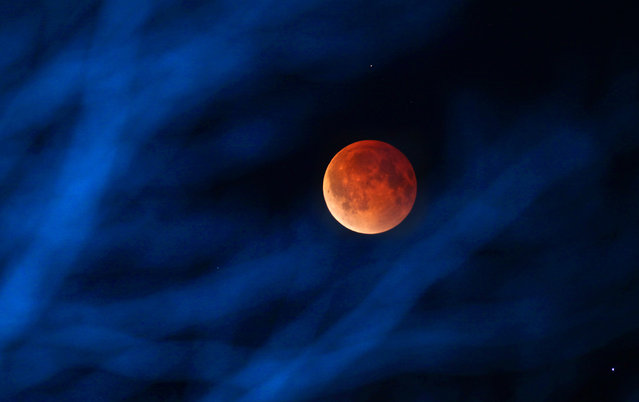 The moon glows a red hue during a total lunar eclipse Tuesday, April 15, 2014, as seen from the Milwaukee area. Tuesday's eclipse is the first of four total lunar eclipses that will take place between 2014 to 2015. (Photo by Mike De Sisti/AP Photo/Milwaukee Journal-Sentinel) 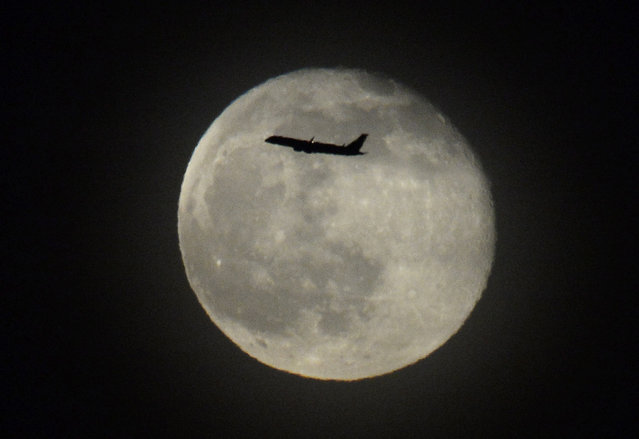 A jetliner takes off from San Francisco International Airport in front a full moon over San Francisco Bay in San Francisco, California, USA, 15 May 2014. (Photo by John G. Mabanglo/EPA) 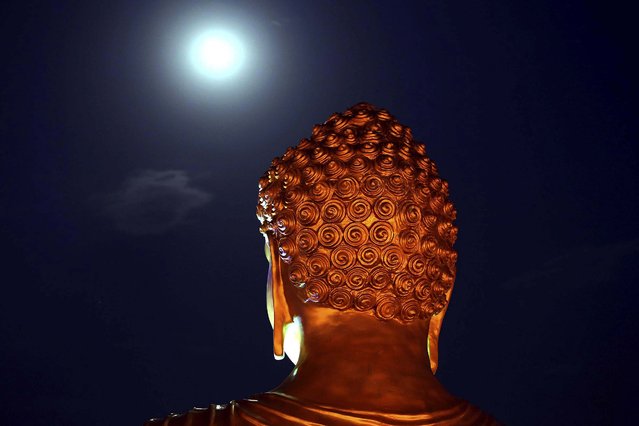 A full moon is seen behind a Buddha statue lit up on the eve of the Buddha Jayanti festival at a monastery in Bhopal, India, on May 13, 2014. The festival marks Buddha's birth, enlightenment and death. (Photo by Rajeev Gupta/Associated Press) 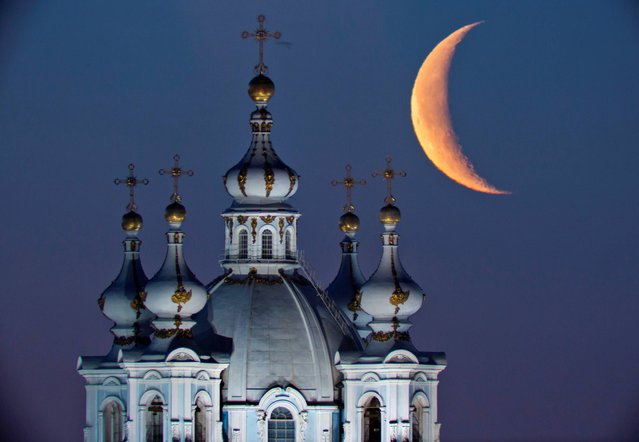 The moon rises in the sky above the domes of the Smolny Cathedral in St.Petersburg, Russia, Friday, April 25, 2014. One of St. Petersburg landmarks, the Smolny convent's main church was built between 1748 and 1764 by Italian architect Francesco Bartolomeo Rastrelli. (Photo by Dmitry Lovetsky/AP Photo) 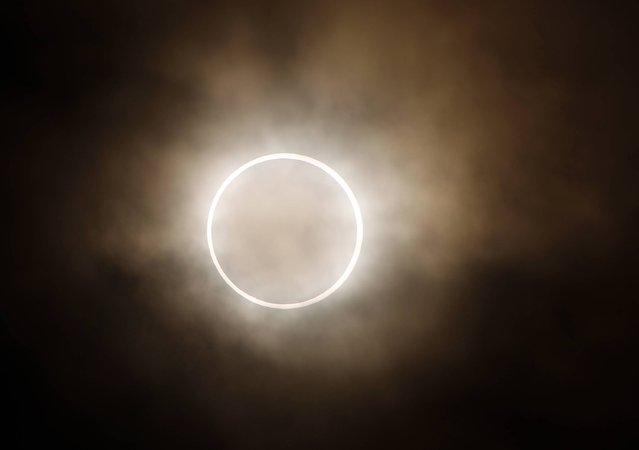 In this May 21, 2012 file photo, the moon slides across the sun, showing a blazing halo of light, during an annular eclipse at a waterfront park in Yokohama, near Tokyo. The first solar eclipse of the year happens Tuesday, April 29, 2014, and will be visible to skygazers in Antarctica, Australia, and the southern Indian Ocean. The eclipse Tuesday is a rare type of annular eclipse, meaning the sun will appear as a ring around the moon. (Photo by Shuji Kajiyama/AP Photo) 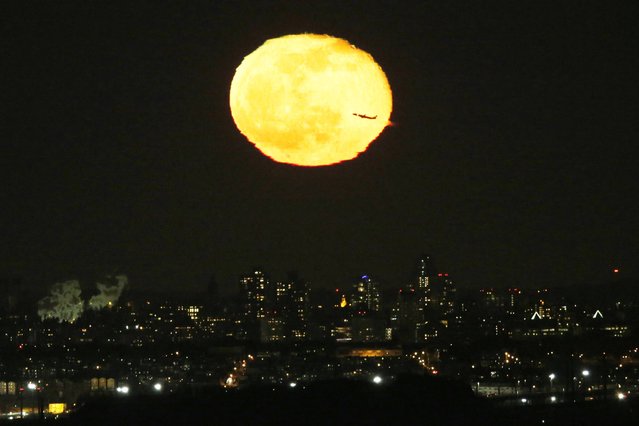 A plane flies in front of the moon as it rises in its waning gibbous phase over New York City seen from Eagle Rock Reservation in West Orange, N.J, Wednesday, April 16, 2014. Residents of the northern New Jersey region were unable to see a lunar eclipse two days earlier because of inclement weather. (Photo by Julio Cortez/AP Photo) 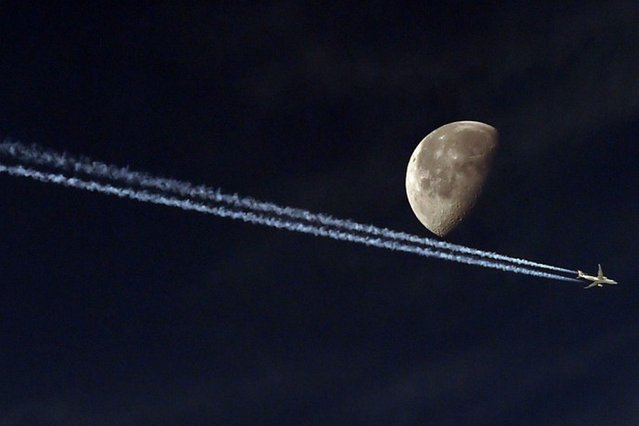 A jetliner leave a vapour trail as it passes in front of the moon on May 20, 2014, taken from the Algerian capital Algiers. (Photo by Farouk Batiche/AFP Photo)
Edit Del
25 May 2014 13:03:00, post received 0 comments
Publication archive:
←   →
Popular tags:
All tags
Last searches: