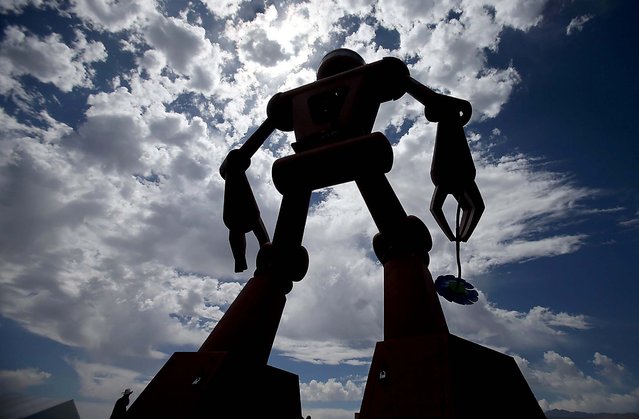 A man is dwarfed by a giant robot art sculpture on the Empire Polo Grounds at the Coachella Valley Music & Arts Festival at the Empire Polo Club in Indio, California, April 12, 2014. (Photo by Luis Sinco/Los Angeles Times/MCT) 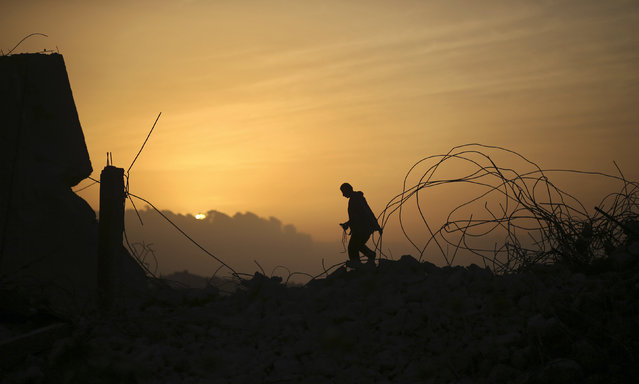 A Palestinian man walks atop a destroyed building during sunset in the northern Gaza Strip April 7, 2014. (Photo by Mohammed Salem/Reuters) 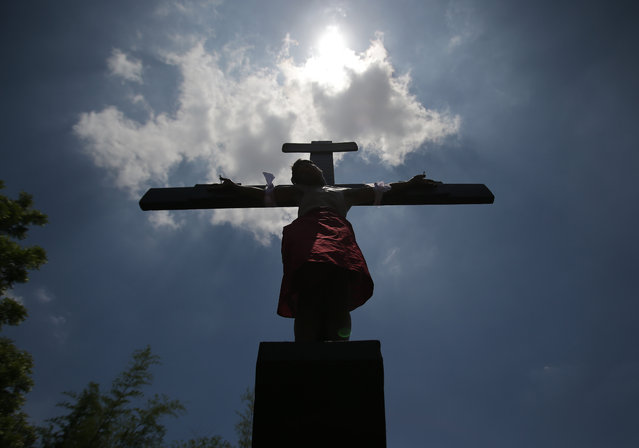 A Filipino devotee is nailed to a cross to re-enact the crucifixion of Jesus Christ in Santa Lucia village, Pampanga province, northern Philippines on Friday, April 18, 2014. Church leaders and health officials have spoken against the practice which mixes Roman Catholic devotion with folk belief, but the annual rites continue to draw participants and huge crowds. (Photo by Aaron Favila/AP Photo) 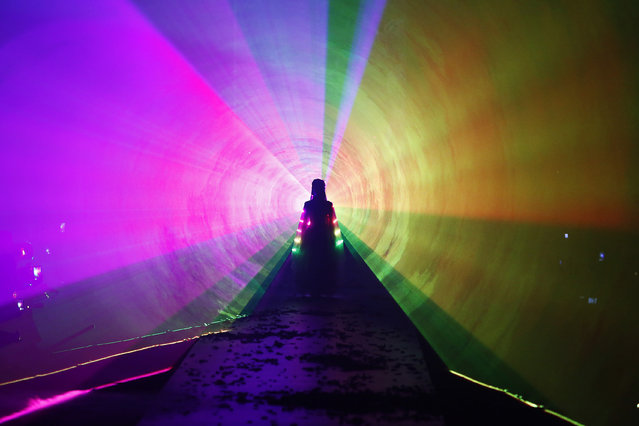 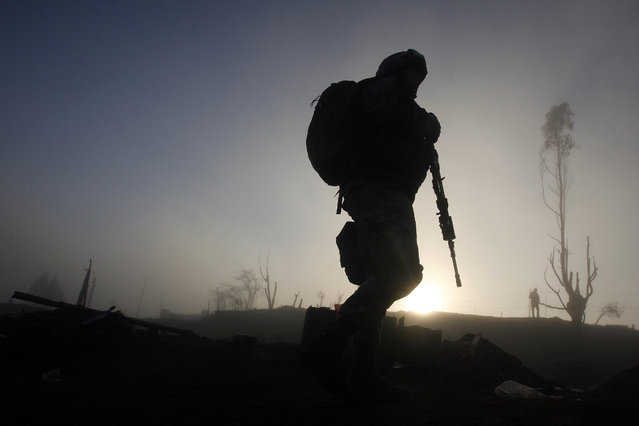 A soldier walks past an area destroyed by wildfires in Valparaiso, Chile, Tuesday April 15, 2014. A raging fire leaped from hilltop to hilltop in this port city, killing more than a dozen people and destroying thousands of homes, with thousands more evacuated. (Photo by Luis Hidalgo/AP Photo) 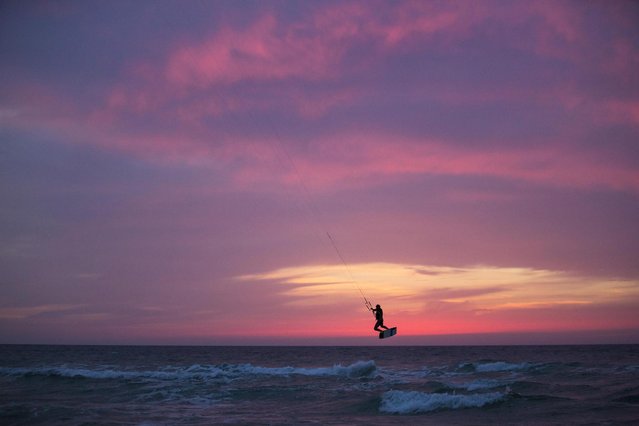 A man surfs with his kite in the Mediterranean sea at the southern Israeli city of Ashkelon, during the vacation of the Jewish holiday of Passover, April 16, 2014. (Photo by Amir Cohen/Reuters) 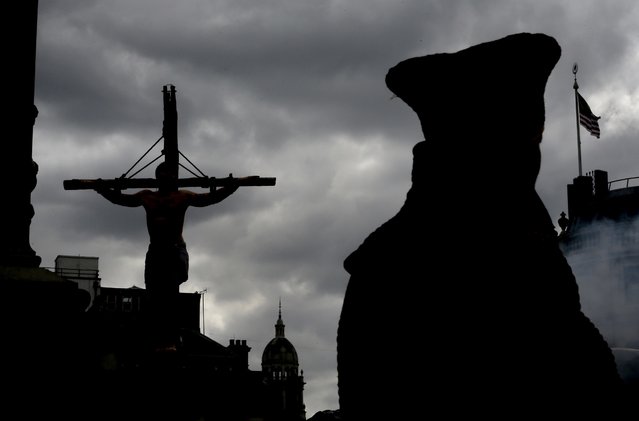 An actor is silhouetted hanging on a cross during a performance in Trafalgar Square in London, Friday, April 18, 2014. The play called “The Passion of Jesus” was a free performance depicting the betrayal, capture, trial, crucifixion and resurrection of Jesus, performed by the Wintershall players. (Photo by Kirsty Wigglesworth/AP Photo) 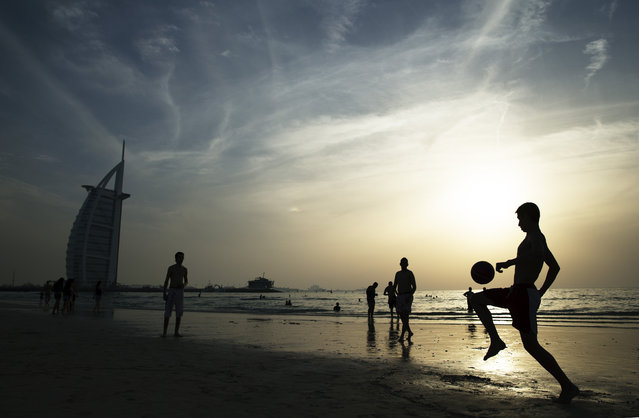 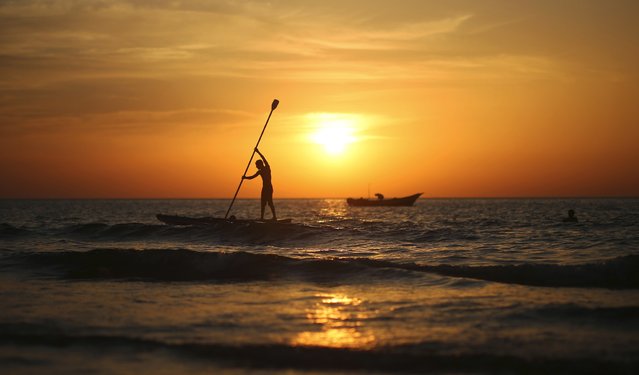 A Palestinian man paddles a traditional boat in the Mediterranean Sea off the coast of Gaza City April 18, 2014. (Photo by Mohammed Salem/Reuters) 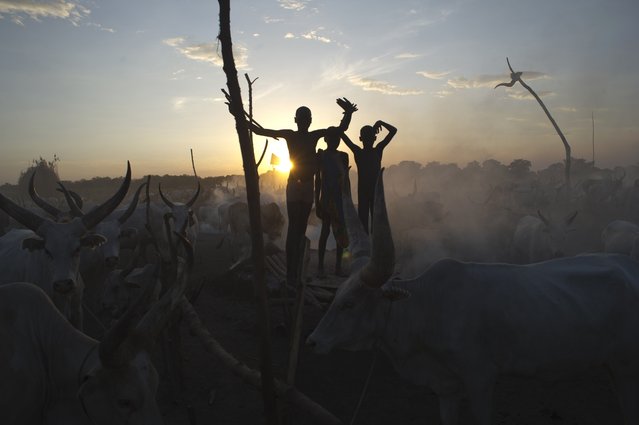 South Sudanese cattle herders stand among their animals in a field in Terekeka, in the Central Equatoria state of South Sudan, on April 13, 2014. Conflict in South Sudan has triggered a serious risk of famine that will kill up to 50,000 children within months if immediate action is not taken, the UN warned on April 11. (Photo by Ali Ngethi/AFP Photo) 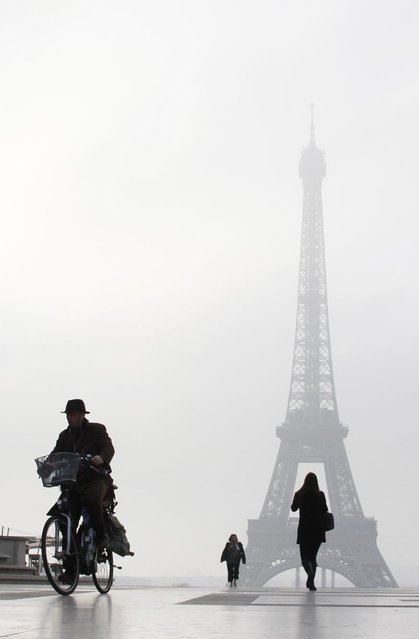 A man rides a bicycle on the Esplanade du Trocadero in front of the Eiffel tower, on March 11, 2014 in Paris. (Photo by Ludovic Marin/AFP Photo) 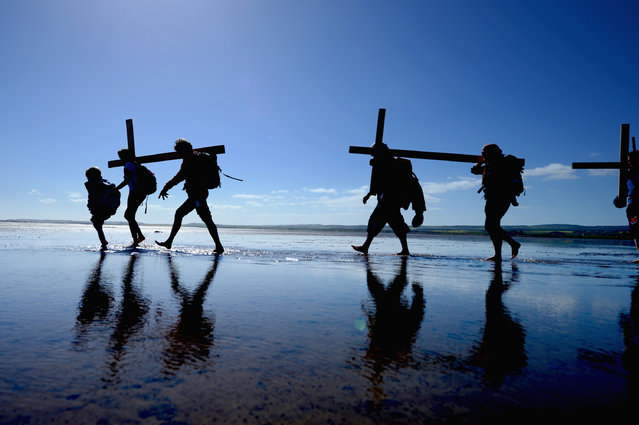 Pilgrims walk with crosses as the Northern Cross pilgrimage undertakes its final leg of the journey to Holy Island on April18, 2014 in Berwick-upon-Tweed, England. More than 50 people, young and old, celebrated Easter by crossing the tidal causeway during the annual Christian pilgrimage. Every year people of all ages, from all over the world and from all realms of Christian life walk together at Easter to Holy Island. Photo by Jeff J. Mitchell/Getty Images) 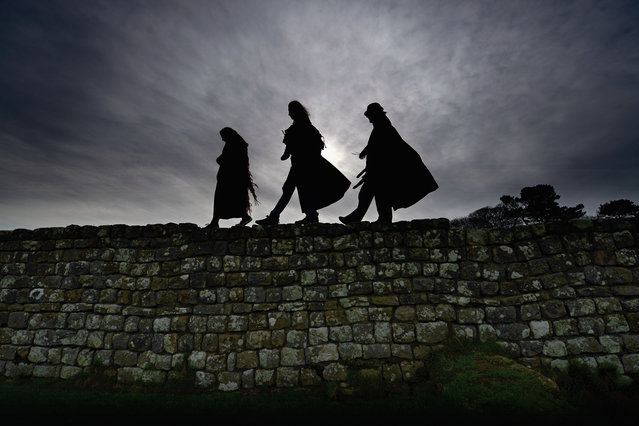 Members of the public visit Hadrian's Wall at Housesteads Roman Fort, the wall was started in AD 122 on the orders of Emperor Hadrian to keep out the Picts from Scotland on April 17, 2014 in England. A referendum on whether Scotland should be an independent country will take place on September 18, 2014. (Photo by Jeff J Mitchell/Getty Images) 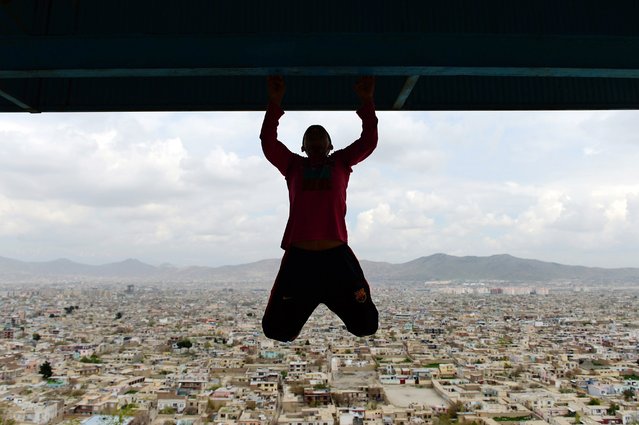 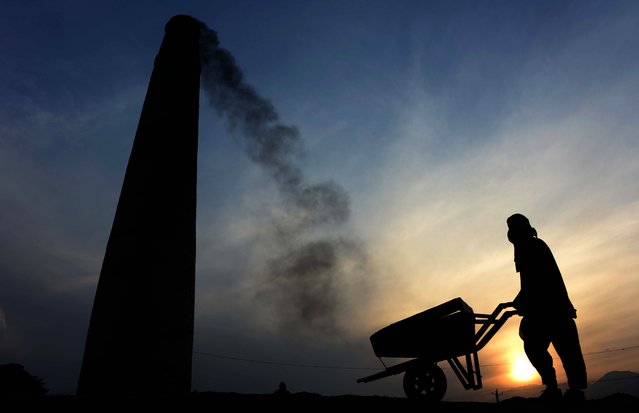 An Afghan day labourer pushes his wheelbarrow at a traditional factory on the outskirts of Jalalabad in Nangarhar province on April 17, 2014. Afghanistan remains at war, with civilians among the hardest hit as the Taliban wage an increasingly bloody insurgency against the government. (Photo by Noorullah Shirzada/AFP Photo) 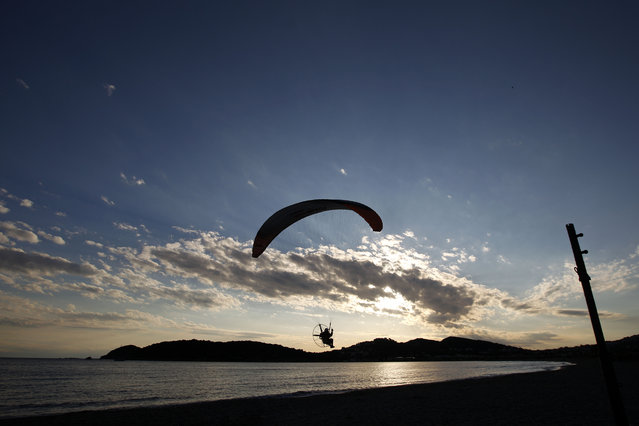 A paraglider flies over the beach of Anavyssos near Athens on Saturday, April 12, 2014. In a statement Friday, finance ministers and central bankers from the Group of 20 wealthy and developing nations state they believe an ambitious goal to boost global growth by $2 trillion in the next five years is within reach. (Photo by Kostas Tsironis/AP Photo) 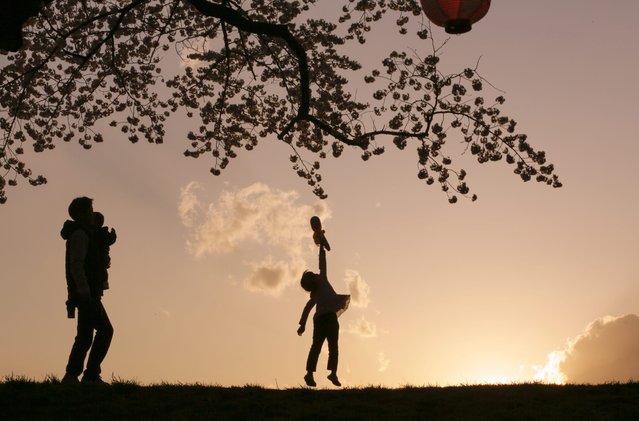 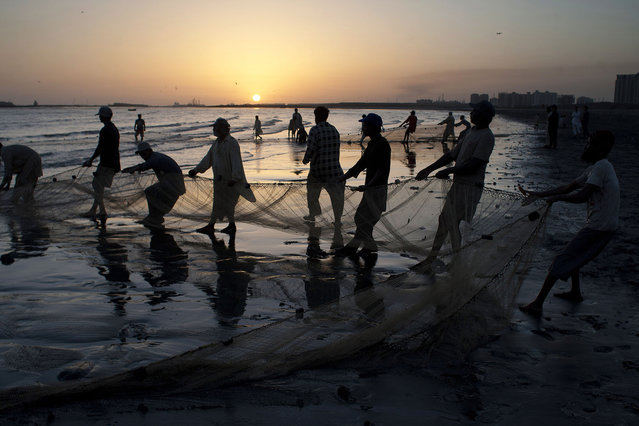 Pakistani fishermen pull their net out of the sea onto the beach in Karachi, Pakistan, Tuesday, April 8, 2014. (Photo by Shakil Adil/AP Photo) 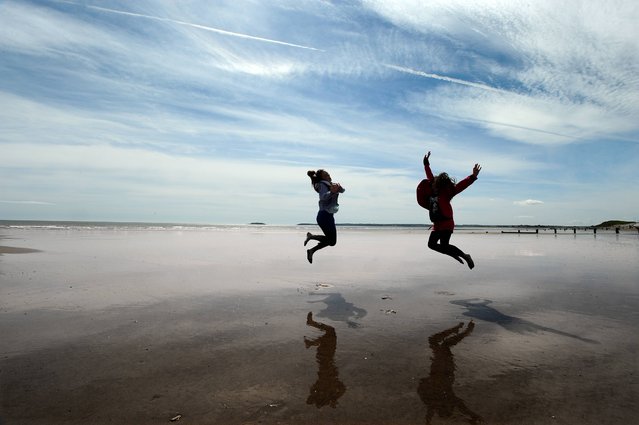