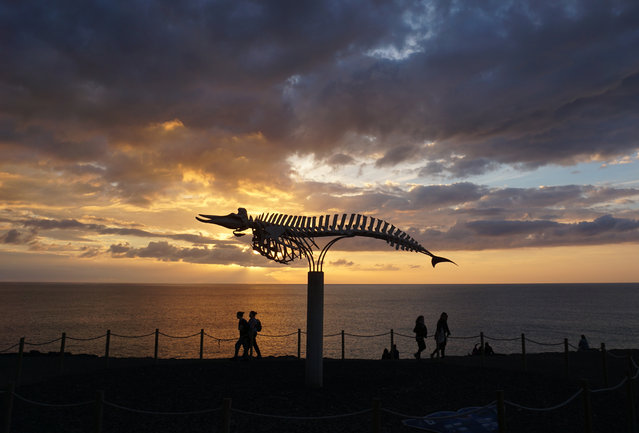 The sun sets behind a skeleton of a beached whale on display on the outskirts of the Spanish fishing town of El Cotillo in the Canary Islands on Sunday, December 30, 2018. (Photo by Raphael Satter/AP Photo) 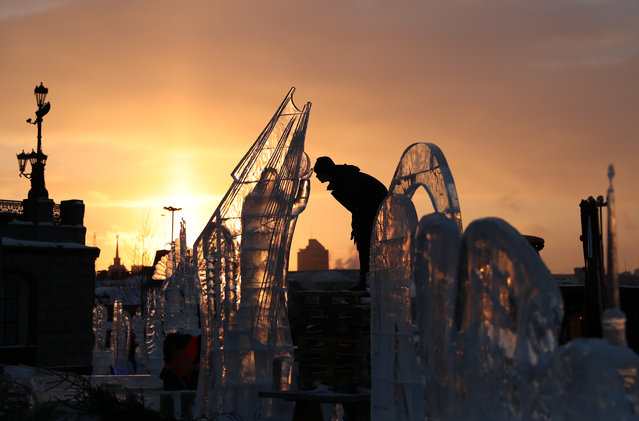 Ice sculptures carved as part of the 2019 Star of Bethlehem ice sculpture festival in Yekaterinburg, Russia on January 6, 2019. (Photo by Donat Sorokin/TASS) 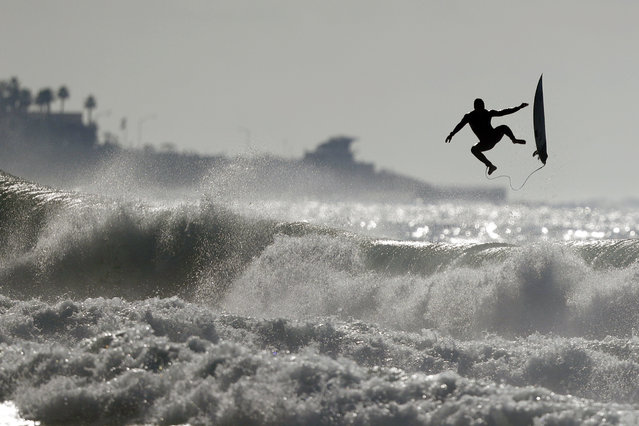 A surfer exits a wave while surfing at Black's Beach Tuesday, December 18, 2018, in San Diego. Large surf continued to pound the California coast Tuesday, as officials warned of dangerous currents along the beaches and hazardous conditions at sea. (Photo by Gregory Bull/AP Photo) 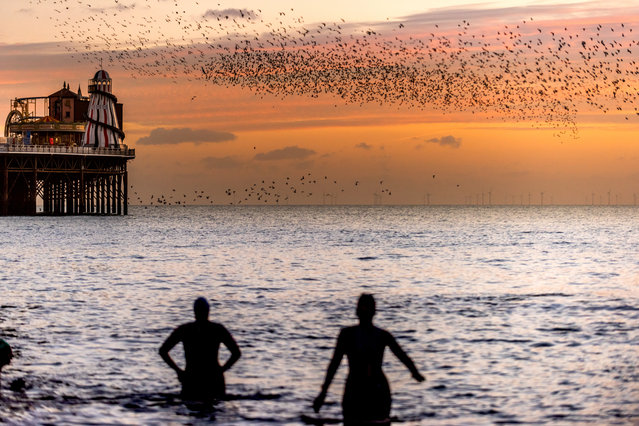 People watching the nightly starling murmuration at Brighton's Palace Pier before the birds roost for the night, on January 8, 2019 in Brighton, England. (Photo by Andrew Hasson/Getty Images) 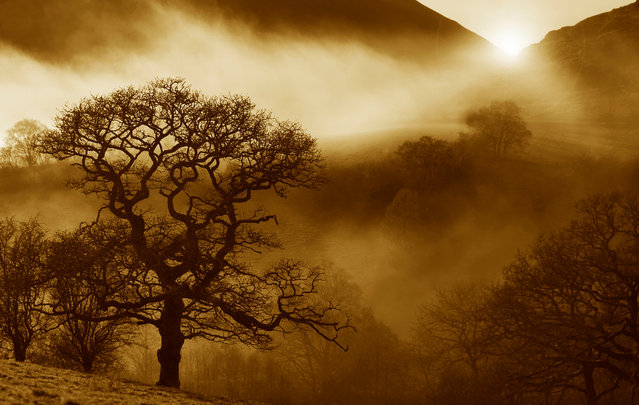 “Oak Sunrise” by professional photographer Alan Price has won the International Garden Photographer of the Year, “Celebrating Our Oaks” competition, run in partnership with Action Oak. Action Oak is a campaign to protect the UK’s oak trees from threats including pests and diseases. (Photo by Alan Price/IGOTY) 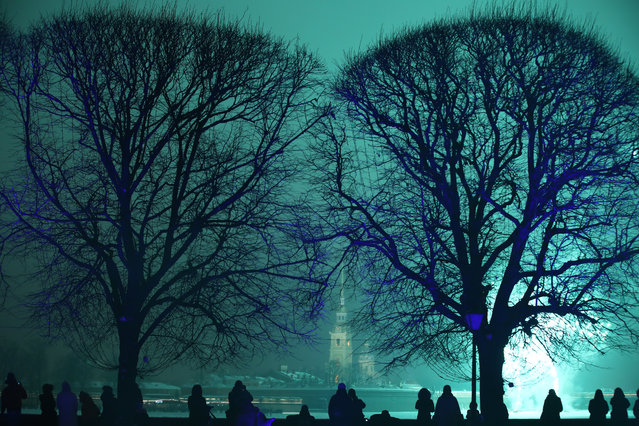 The Peter and Paul Fortress illuminated during the Christmas Star light show in St Petersburg, Russia on January 7, 2019. (Photo by Peter Kovalev/TASS) 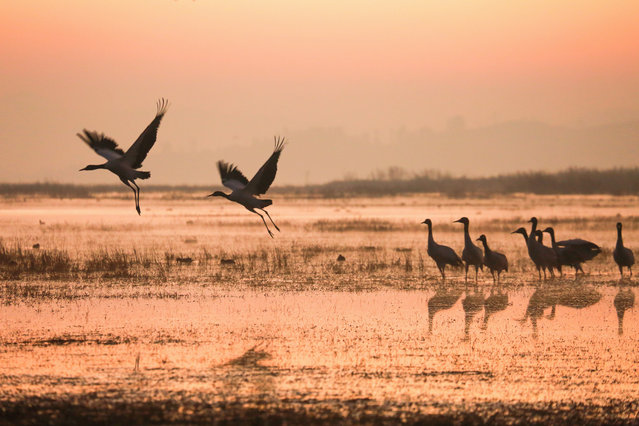 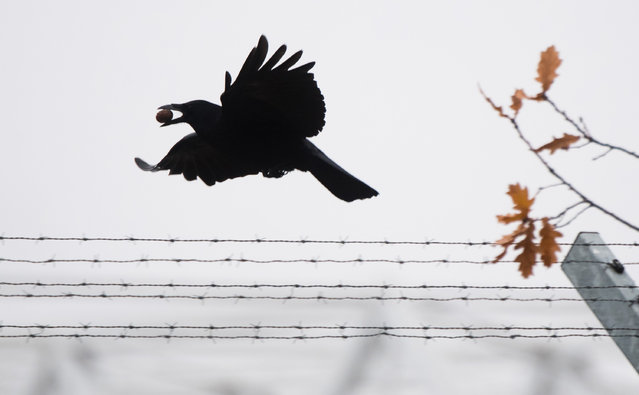 A crow carrying a nut flies over a barbed wire in Hanover, northern Germany on November 27, 2018. (Photo by Julian Stratenschulte/DPA) 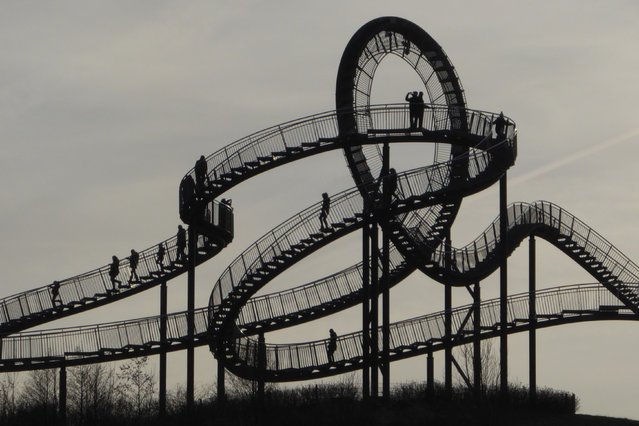 People can be seen walking on the “Tiger and Turtle Magic Mountain” art installation in Angerpark, Duisburg, Germany on December 267, 2018. Designed by Ulrich Genth and Heike Mutter in 2011, it is 21 meters tall, made out of tin, zinc and steel. It resembles a roller coaster but is completely walkable, except for the loop. (Photo by Jan Scheunert/ZUMA Wire/Rex Features/Shutterstock) 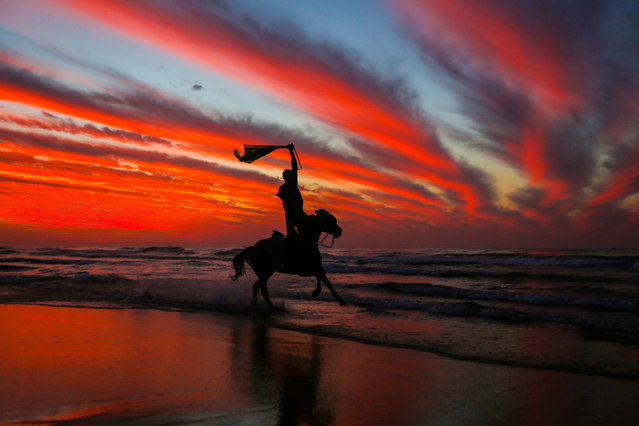 A Palestinian horseman rides on the beach at sunset a few hours prior to the new year's celebrations, west of in Gaza city on December 31, 2018. (Photo by Mahmud Hams/AFP Photo) 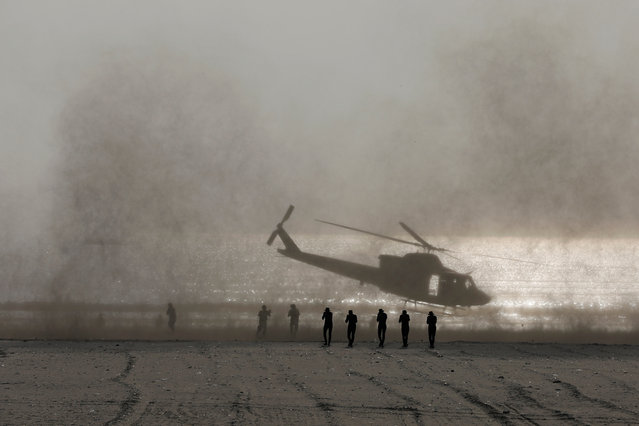 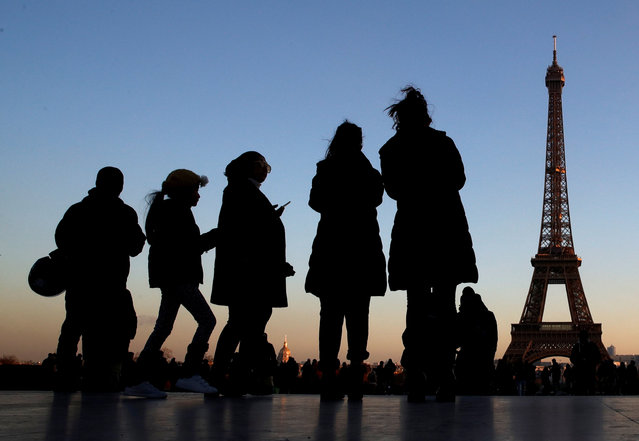 People stand at the Trocadero square near the Eiffel Tower in Paris, France, December 12, 2018. (Photo by Gonzalo Fuentes/Reuters) 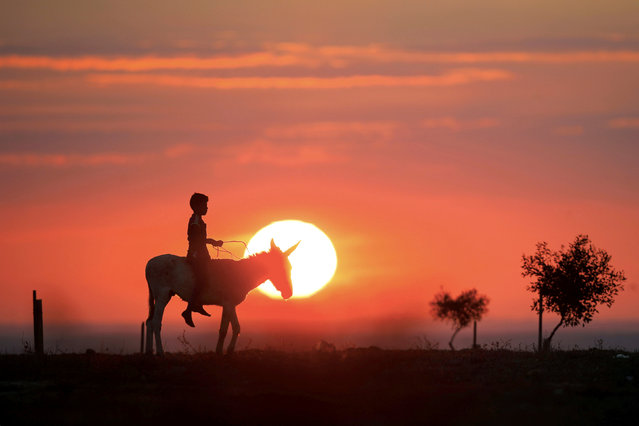 A Bedouin boy rides a donkey on a sunset, in a field near the southern city of Ofakim, Israel December 22, 2018. (Photo by Amir Cohen/Reuters) 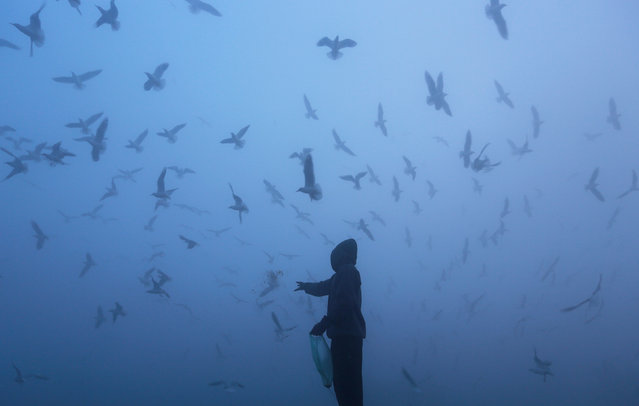 A man feeds seagulls as he stands on the banks of Yamuna river on a foggy winter morning in New Delhi, India, December 24, 2018. (Photo by Adnan Abidi/Reuters) 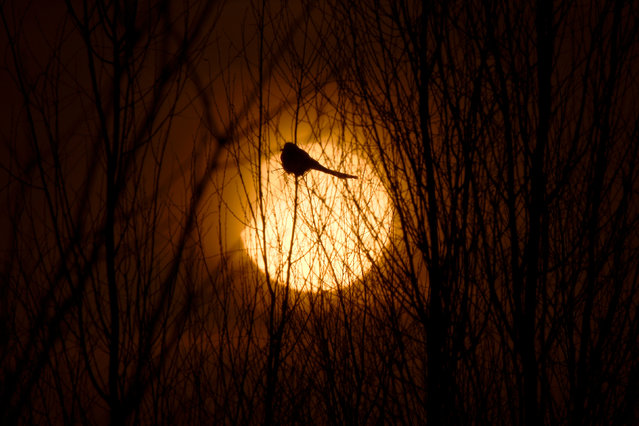 A partial solar eclipse is seen through a silhouette of a bird sitting on tree branches in Yinchuan, Ningxia Hui Autonomous Region, China January 6, 2019. (Photo by Reuters/China Stringer Network) 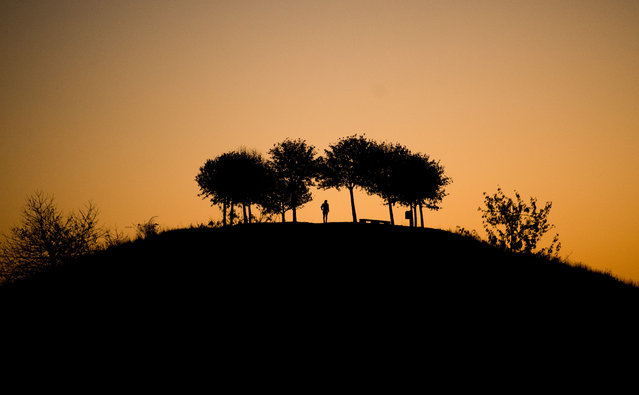 A man goes for a walk on Kronsberg near Hanover, Germany on November 6, 2018, when the rising sun turns the morning sky reddish. (Photo by Julian Stratenschulte/DPA) 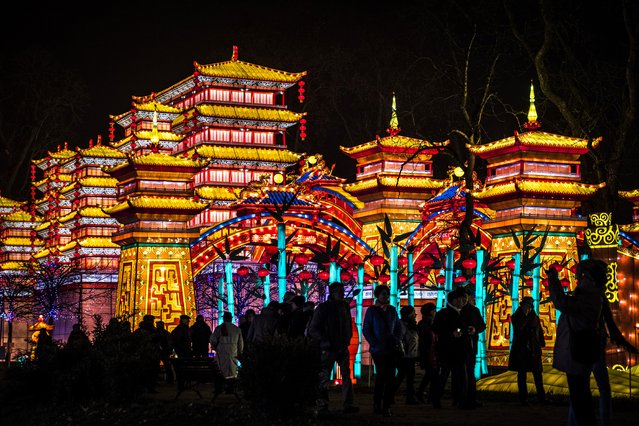 Visitors stand in front of monumental silk lanterns depicting a palace, installed at the Foucaud Park in Gaillac, southwestern France, during the Lantern Festival, on December 12, 2018. Monumental silk sculptures are exhibited in Gaillac from December 1, 2018 to February 6, 2019, as part of the Chinese traditional Lantern Festival marking the end of celebrations for the Chinese Lunar New Year period. (Photo by Eric Cabanis/AFP Photo) 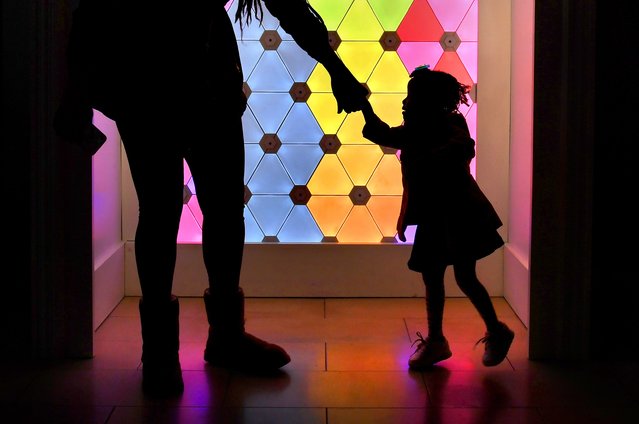 Jasmine White and her daughter Hope, 2, enter one of the four selfie cubes at The Mall in Columbia, Md. on October 25, 2018. The cubes offer changing colorful light patterns and sounds, and shoppers are encouraged to dance and take photos in it. (Photo by Michael S. Williamson/The Washington Post) 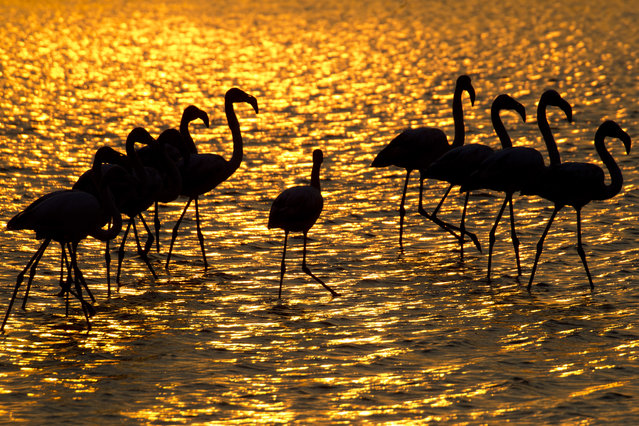 Flamingos search for food in a pond near Gan Shmuel, Israel, Thursday, November 8, 2018. Israel is a popular stopping-point on the migration routes for more than 400 species of birds on the way to Africa and back to Europe during the year. (Photo by Ariel Schalit/AP Photo) 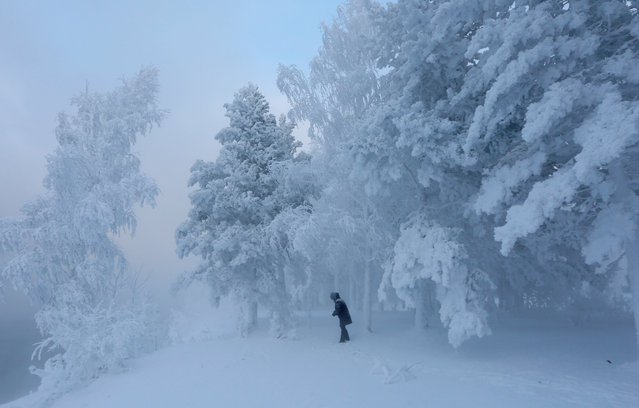 A woman walks amidst trees covered with hoarfrost and snow in a forest on the bank of the Yenisei River, with the air temperature at about minus 32 degrees Celsius (minus 25.6 degrees Fahrenheit), near the Siberian city of Krasnoyarsk, Russia December 6, 2018. (Photo by Ilya Naymushin/Reuters)
Edit Del
10 Jan 2019 00:03:00, post received 0 comments
Publication archive:
←   →
Popular tags:
All tags
Last searches: