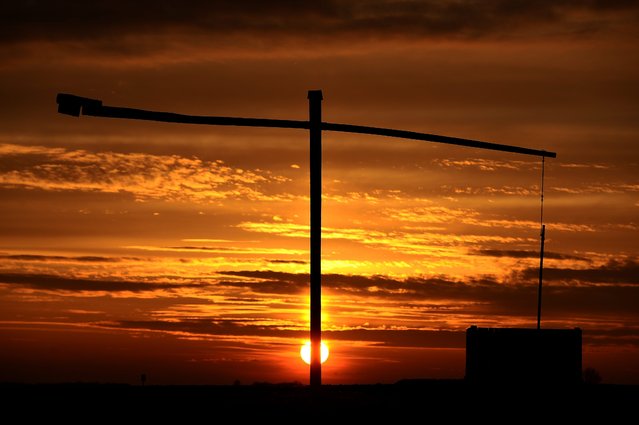 A shadoof is seen during sunset in the Hungarian steppe of Hortobagy, some 180 kms east of Budapest, Hungary February 27, 2016. (Photo by Zsolt Czegledi/EPA) 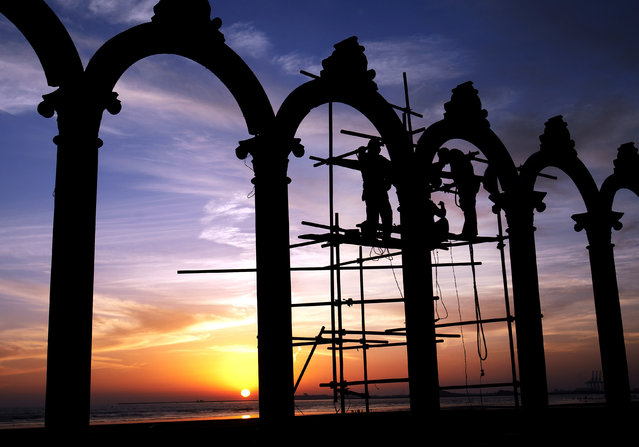 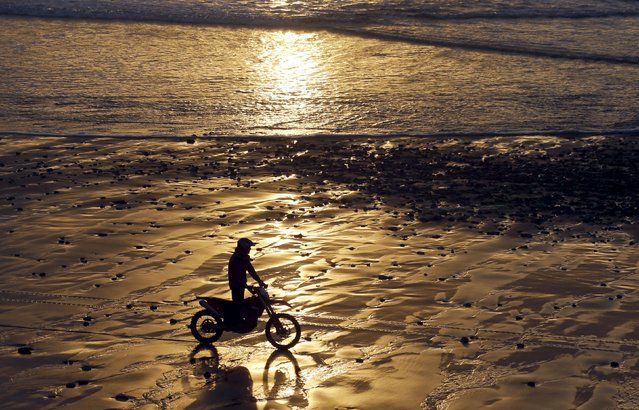 A man rides a motorcycle on a beach along the Atlantic Ocean coast at sunset in Cap Ferret, southwestern France, February 19, 2016. (Photo by Regis Duvignau/Reuters) 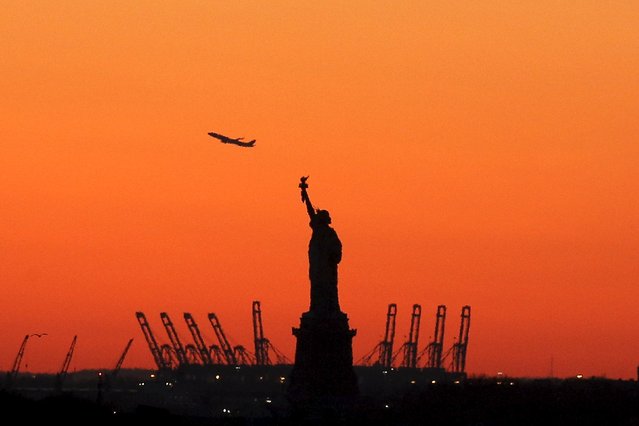 A plane is seen during take off in New Jersey behind the Statue of Liberty in New York's Harbor as seen from the Brooklyn borough of New York February 20, 2016. (Photo by Brendan McDermid/Reuters) 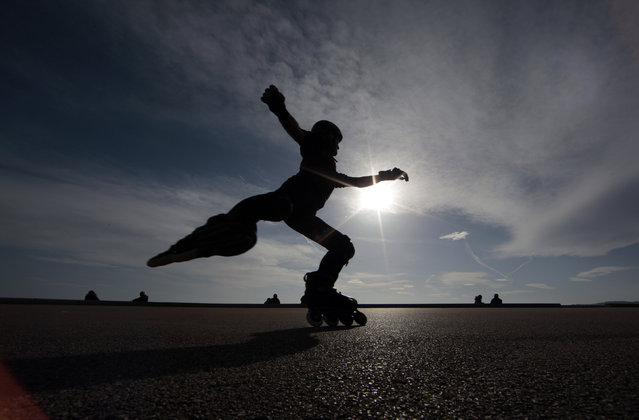 A man skates on the Promenades Des Anglais on a warm and sunny winter day in Nice, France, February 23, 2016. (Photo by Eric Gaillard/Reuters) 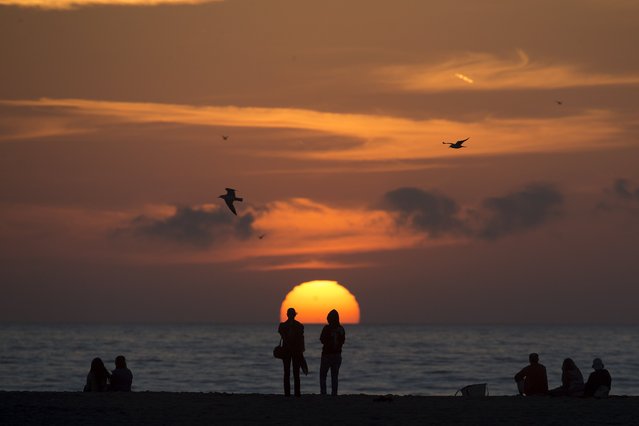 People sit on the beach and watch the sun set as seagulls fly over head in Santa Monica, California February 27, 2016. (Photo by Carlo Allegri/Reuters) 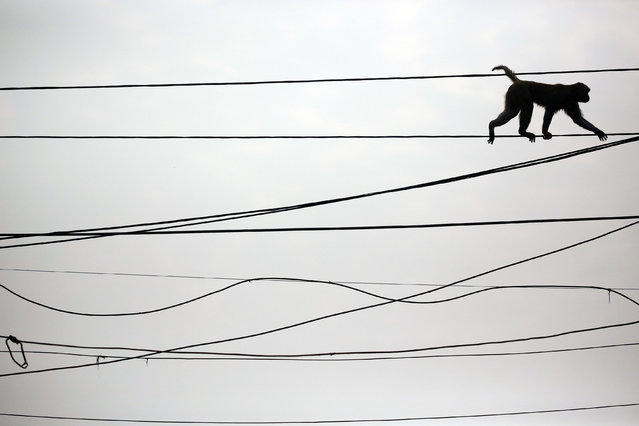 A monkey walks on power lines above a busy market in the old quarters of Delhi, India, February 29, 2016. (Photo by Cathal McNaughton/Reuters) 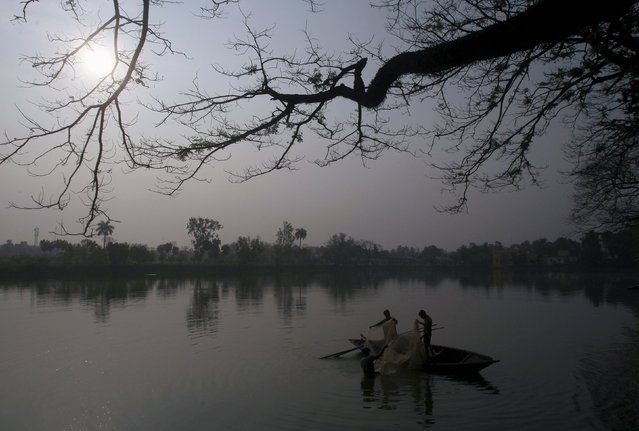 Fishermen retrieve their nets as they fish from a lake in Agartala in the north east of India, March 1, 2016. (Photo by Jayanta Dey/Reuters) 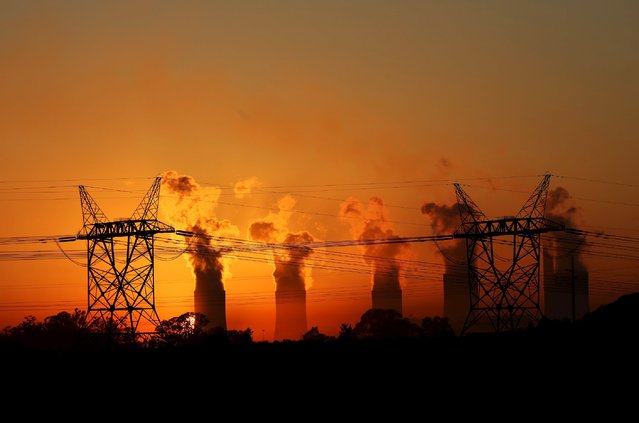 Electricity pylons are seen in front of the cooling towers at the Lethabo Thermal Power Station,an Eskom coal-burning power station near Sasolburg in the northern Free State province, March 2, 2016. (Photo by Siphiwe Sibeko/Reuters) 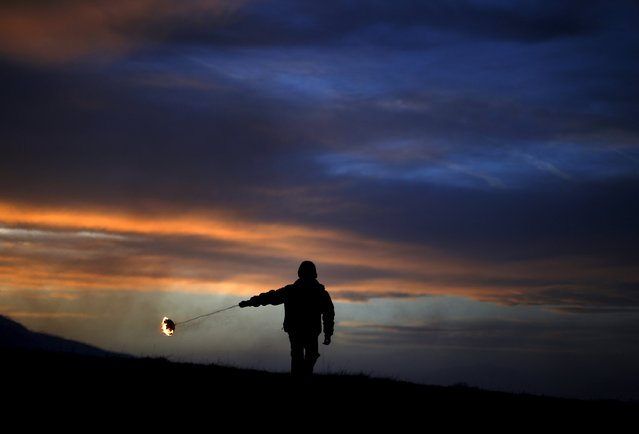 A boy spins ring of fire during rituals in celebration of Mesni Zagovezni, the second Sunday before Great Lent, in the village of Lozen March 6, 2016. People in the region believe they can chase away evil spirits with fire rituals on Mesni Zagovezni. (Photo by Stoyan Nenov/Reuters) 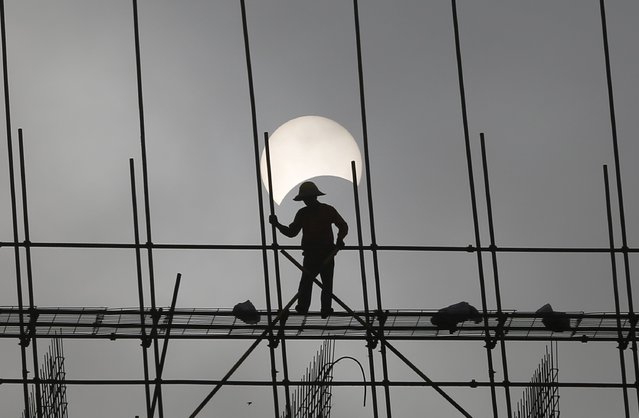 A partial solar eclipse is seen as a labourer works at a construction site in Phnom Penh, Cambodia, March 9, 2016. (Photo by Samrang Pring/Reuters) 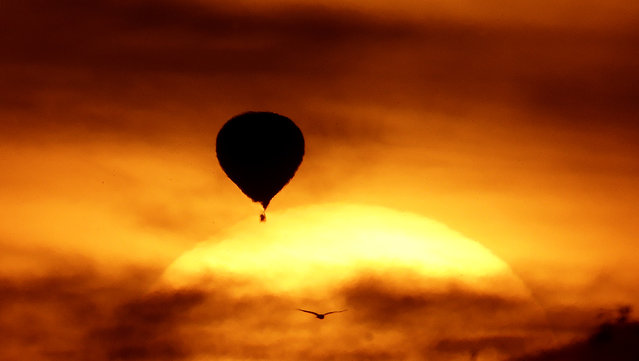 A hot air balloon is silhouetted against the evening sky as the sun sets north of Phoenix on Wednesday, March 2, 2016. (Photo by Charlie Riedel/AP Photo) 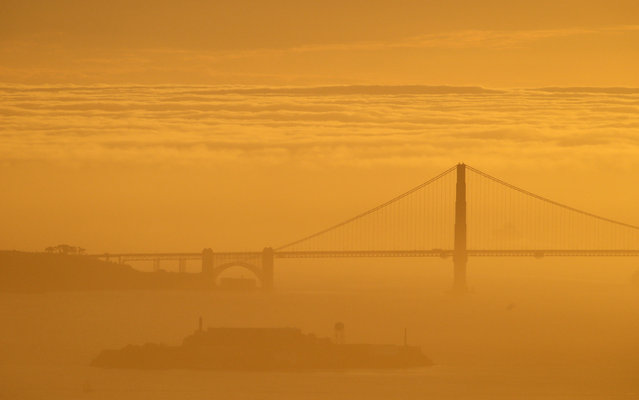 A blanket of fog is seen behind the Golden Gate Bridge and Alcatraz Island as the sun sets Sunday, February 28, 2016, in Berkely, Calif. (Photo by Marcio Jose Sanchez/AP Photo) 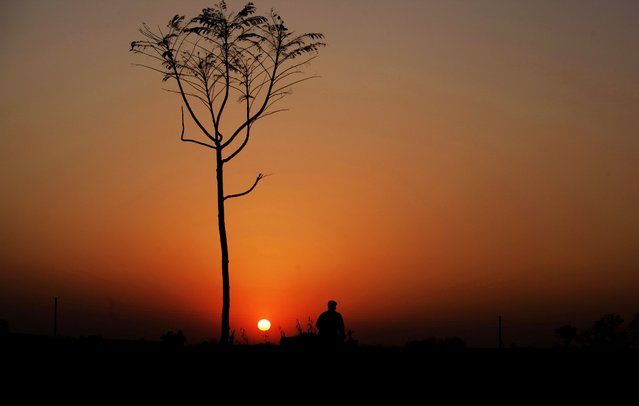 A boy is silhouetted against the sunset as he waits for his friends on a highway on the outskirts of Islamabad, Pakistan, Wednesday, February 17, 2016. (Photo by Anjum Naveed/AP Photo) 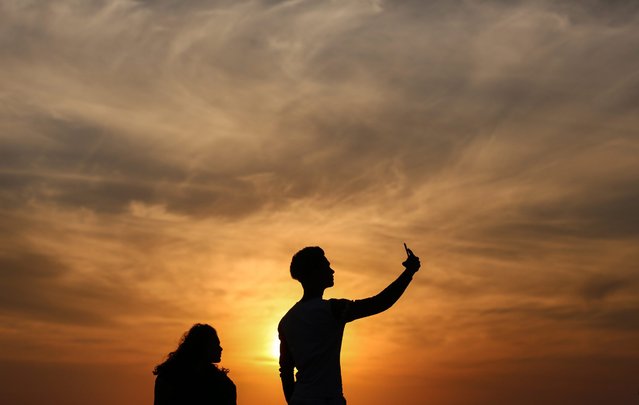 People take selfies at the Bandra Fort Band Stand, a famous tourist spot near the Arabian sea, in Mumbai, India, 25 February 2016. According to reports, around 19 people have died taking selfies in India since 2014. Mumbai has now banned selfies in 16 areas due to safety risks. (Photo by Divyakant Solanki/EPA) 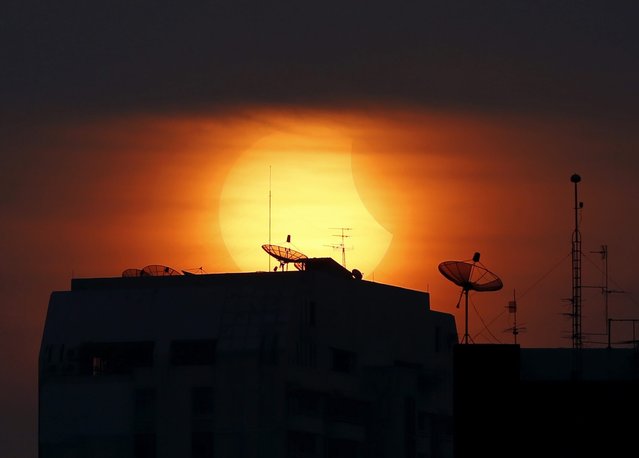 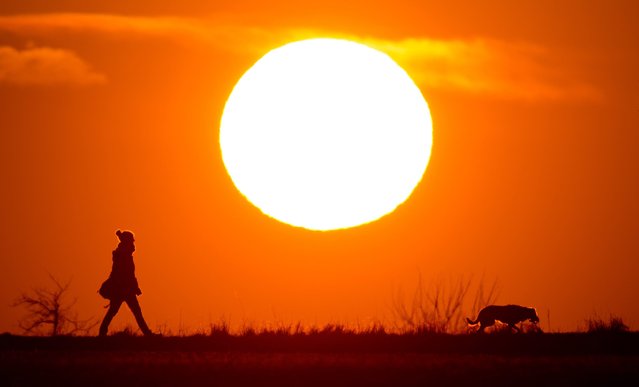 A woman and her dog are silhouetted against the setting sun on a rural road in Hanover, Germany. 29 February 2016. March 01 marks the Beginning of meteorological spring. (Photo by Julian Stratenschulte/EPA) 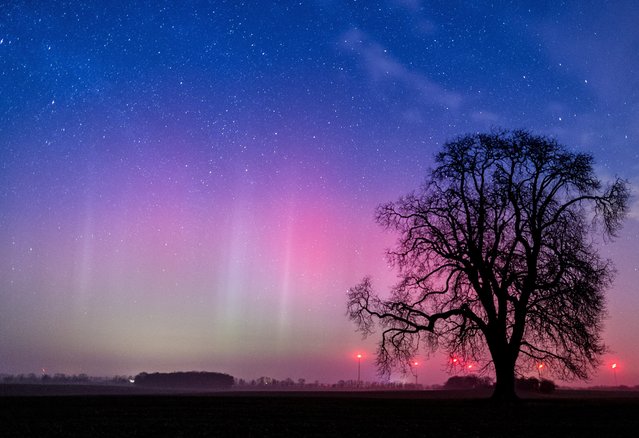 A long-time exposure of about 10 seconds shows a Northern Light (Aurora borealis) in the night sky, near Lietzen, Brandenburg, Germany 06 March 2016. (Photo by Patrick Pleul/EPA) 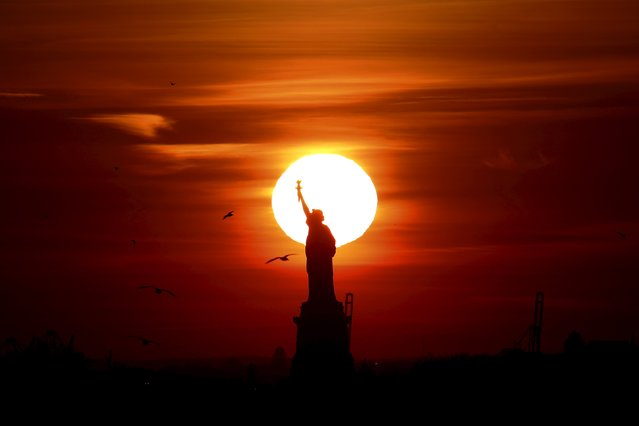 The sun sets behind the Statue of Liberty in New York's Harbor as seen from the Brooklyn borough of New York February 27, 2016. (Photo by Brendan McDermid/Reuters) 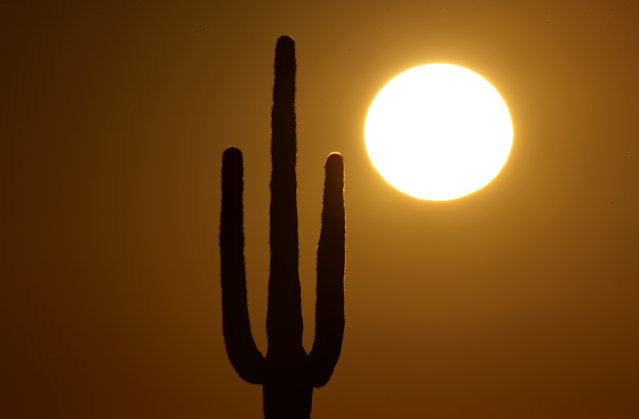 A saguaro cactus stands against the rising sun Monday, February 22, 2016, in the desert north of Phoenix. (Photo by Charlie Riedel/AP Photo) 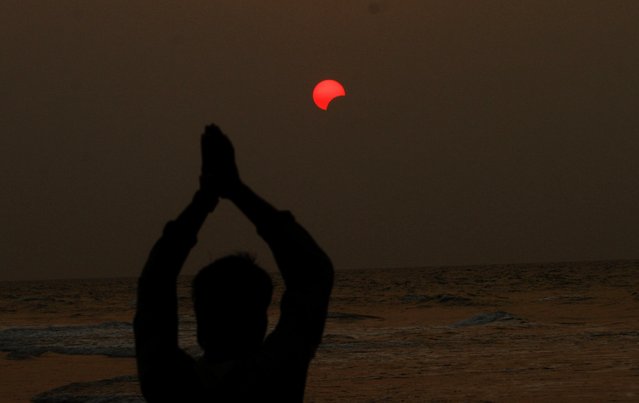 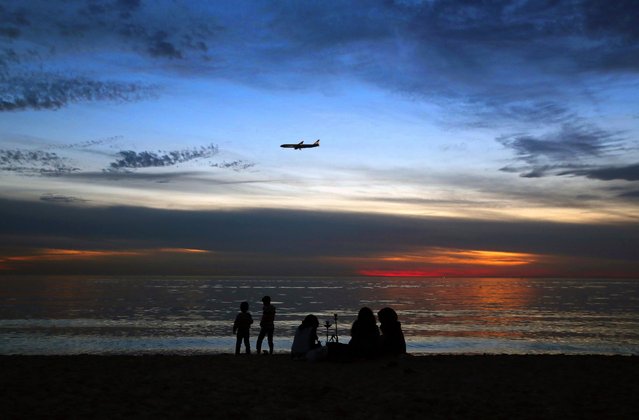 A Lebanese family sits as they smoke a water pipe on the beach at the Ramlet al Bayda public beach in Beirut, Lebanon, Thursday, February 18, 2016. (Photo by Bilal Hussein/AP Photo) 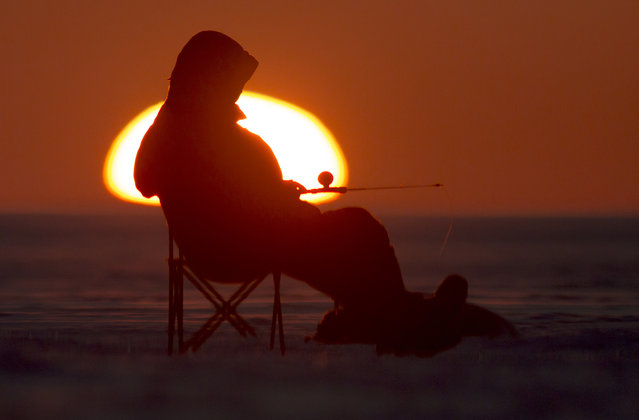 A man fishes through an ice hole in the Finnish Gulf, as the sun sets west of St.Petersburg, Russia, Tuesday, March 1, 2016. (Photo by Dmitri Lovetsky/AP Photo) 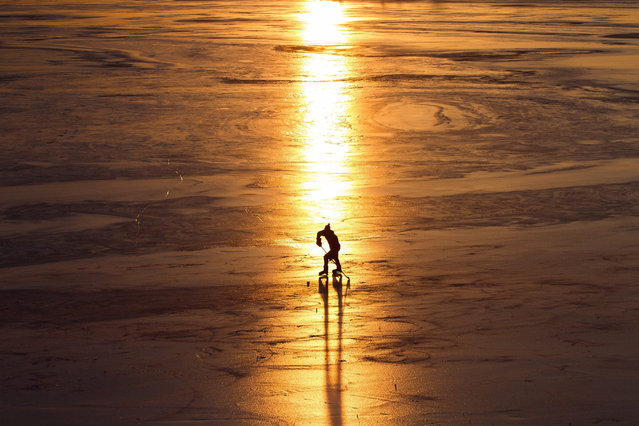