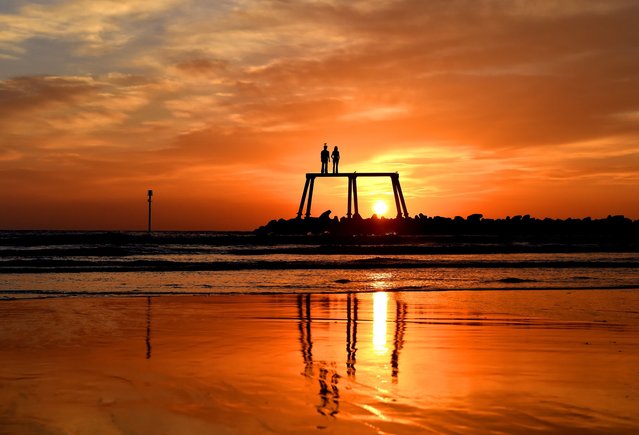 The sun rises over the north sea as The Couple by artist Sean Henery sits just of the coast at Newbiggin-by-the-Sea, England, Wednesday October 8, 2014. (Photo by Owen Humphreys/AP Photo/PA Wire) 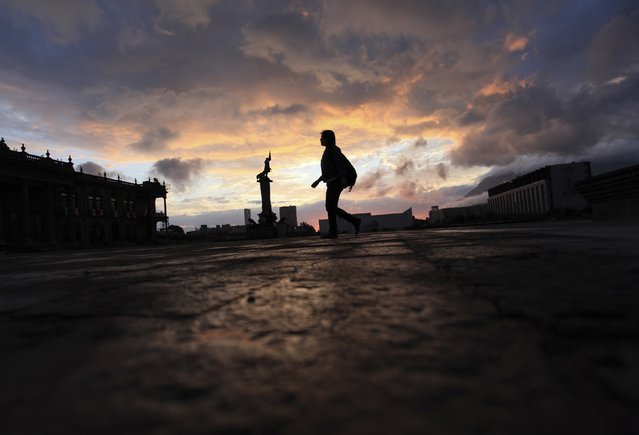 A woman walks in downtown Monterrey, Mexico, on September 25, 2014. (Photo by Daniel Becerril/Reuters) 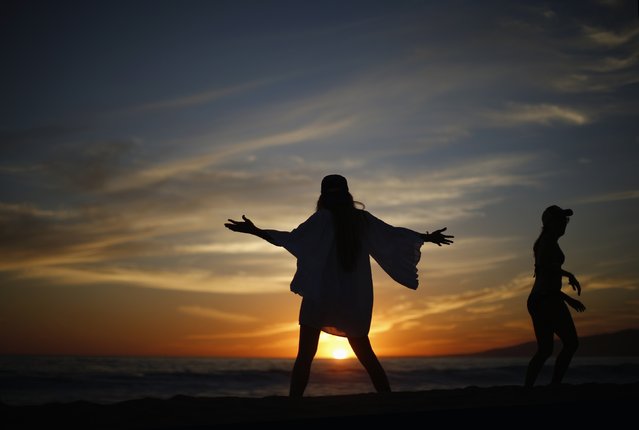 Women watch the sun set over the Pacific Ocean on the beach in Santa Monica, California October 3, 2014. Southern California sizzled in a heat wave as temperatures soared above 100 degrees Fahrenheit in parts of Los Angeles. (Photo by Lucy Nicholson/Reuters) 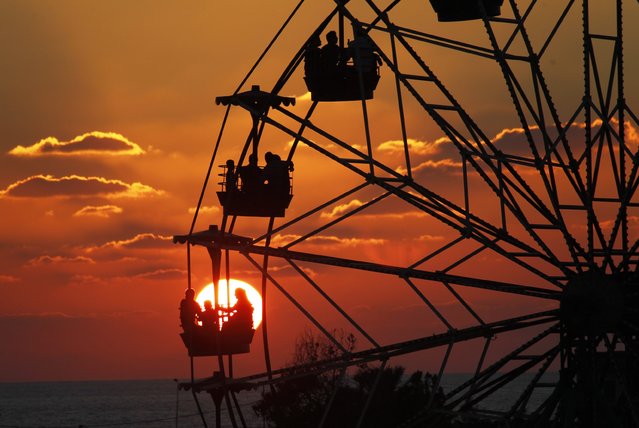 People ride a Ferris wheel in an amusement park as they celebrate the first day of Eid al-Adha, at the port-city of Sidon, southern Lebanon October 4, 2014. (Photo by Ali Hashisho/Reuters) 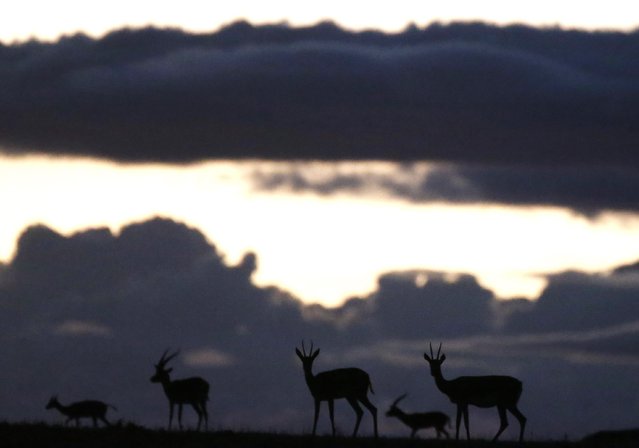 Animals graze at sunset at the Naboisho Conservancy adjacent to the Masai Mara National Reserve October 7, 2014. (Photo by Goran Tomasevic/Reuters) 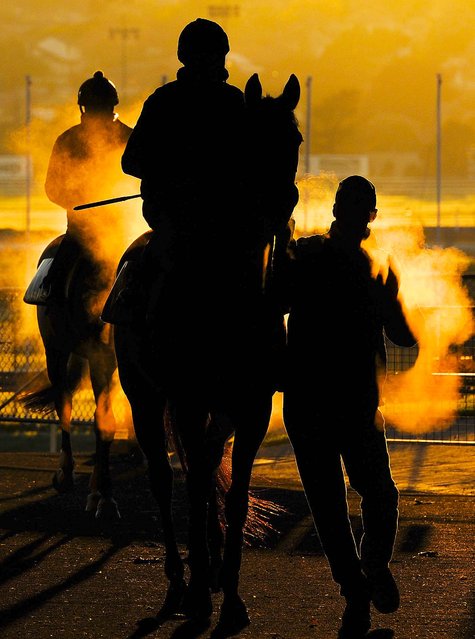 Trainer Nigel Blackiston walks Desert Jeuney back to the stables after a morning workout at Moonee Valley Racecourse in Melbourne, Australia, on September 22, 2014. (Photo by Vince Caligiuri/Getty Images) 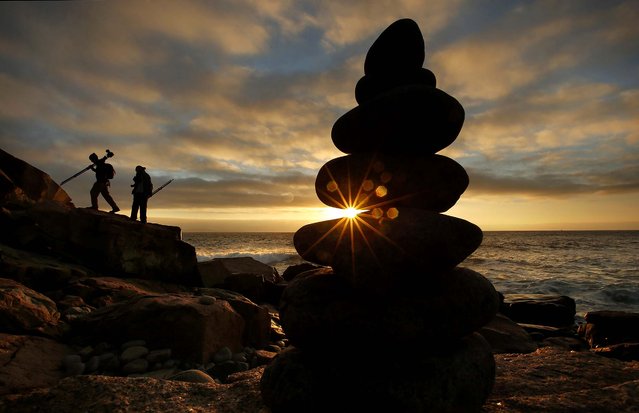 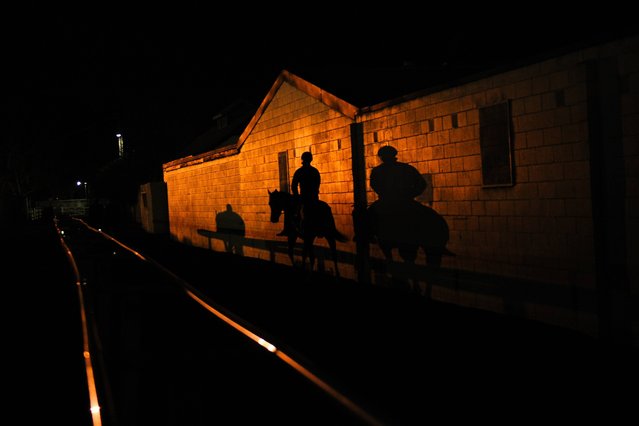 Horses make their way to the track before a Melbourne trackwork session at Caulfield Racecourse on October 7, 2014 in Melbourne, Australia. (Photo by Vince Caligiuri/Getty Images) 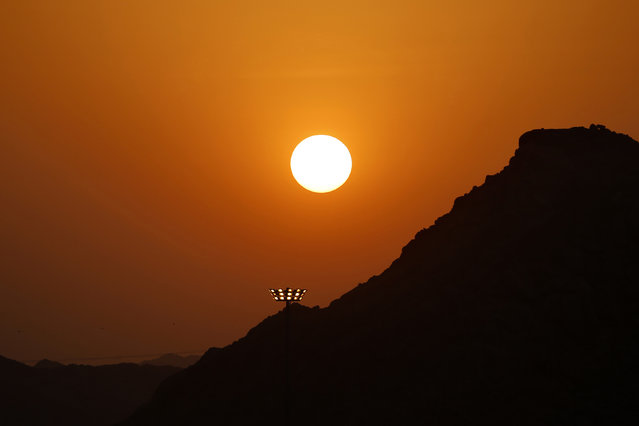 Sunset over seen over Namirah mosque on the plains of Arafat during the annual haj pilgrimage, outside the holy city of Mecca October 3, 2014. (Photo by Muhammad Hamed/Reuters) 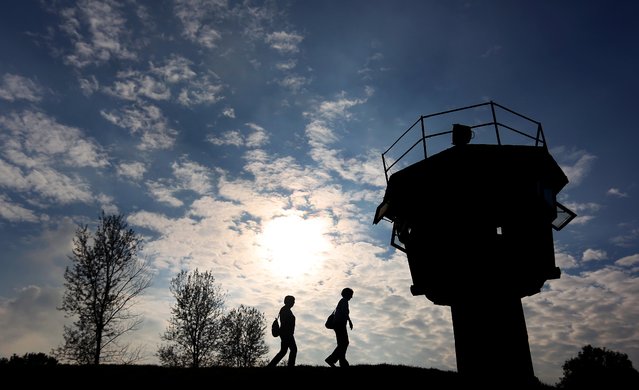 Visitors walk along a watchtower of the former German Democratic Republic (GDR) in Hoetensleben, eastern Germany, on October 2, 2014. This year Germany marks the 25th anniversary of the fall of the German-German border, that fell in November 1989. (Photo by Ronny Hartmann/AFP Photo) 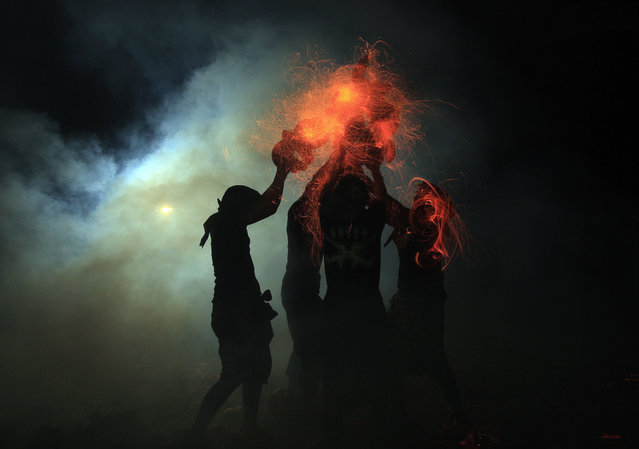 Balinese men lashing burning coconut husks off each other during 'Mesabatan Api' a sacred firefighting ritual at a Hindu temple in Bali, Indonesia, Wednesday October 8, 2014. (Photo by Firdia Lisnawati/AP Photo) 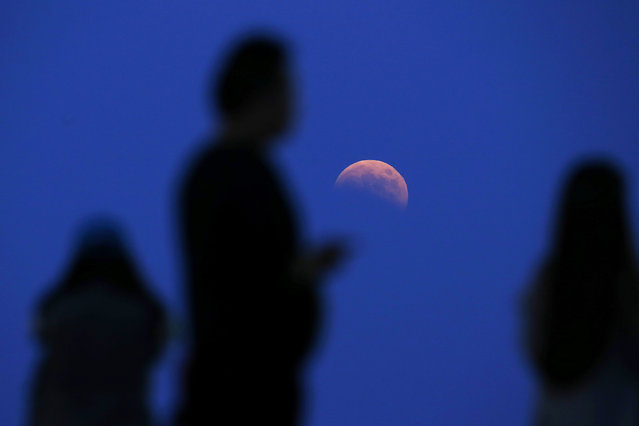 The beginning of a total lunar eclipse is seen from the Qizhong Tennis Court in Shanghai October 8, 2014. The eclipse is also known as a “blood moon” due to the coppery, reddish color the moon takes as it passes into Earth's shadow. The total eclipse is the second of four over a two-year period that began April 15 and concludes on Sept. 28, 2015. The so-called tetrad is unusual because the full eclipses are visible in all or parts of the United States, according to retired NASA astrophysicist Fred Espenak. (Photo by Aly Song/Reuters) 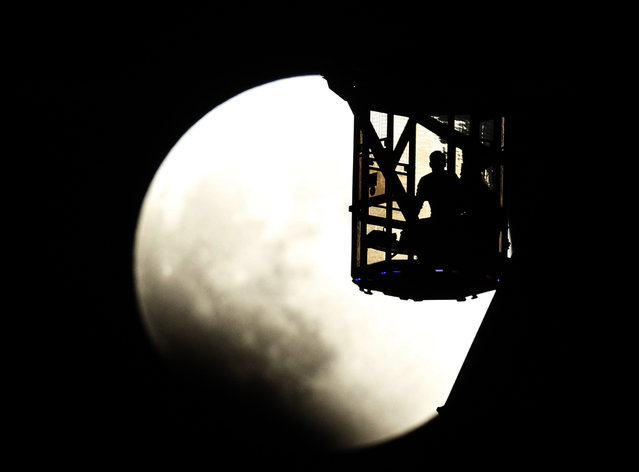 The Earth's shadow renders the moon as a couple in Ferris wheel observe it during a total lunar eclipse in Tokyo, Wednesday, October 8, 2014. (Photo by Koji Sasahara/AP Photo) 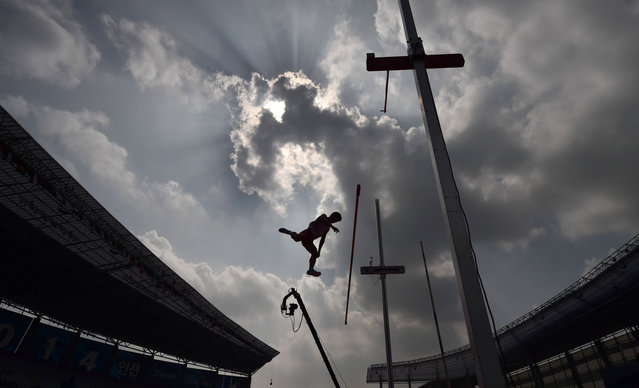 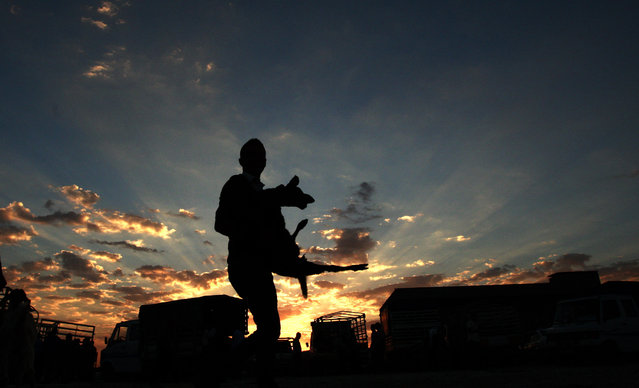 A Palestinian man carries a goat he bought from a livestock market in preparation for the upcoming Eid al-Adha holiday near Jenin, West Bank, Wednesday, October 1, 2014. Muslims worldwide are preparing for the Eid al-Adha holiday, which is marked by the sacrificial killing of sheep, goats, cows or camels. (Photo by Mohammed Ballas/AP Photo) 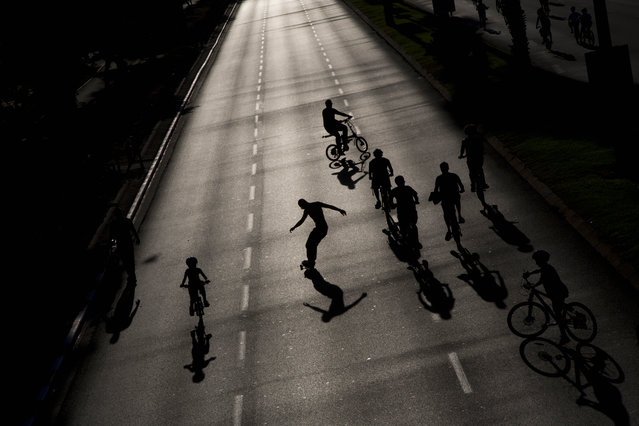 Israelis ride their bicycles and skateboards on a car-free highway, during the holiday of Yom Kippur in Tel Aviv, Saturday, October 4. 2014. Israelis are marking Yom Kippur, or “Day of Atonement”, which is the holiest of Jewish holidays when observant Jews atone for the sins of the past year and the Israeli nation comes to almost a complete standstill. Yom Kippur coincides with the Muslim holiday of Eid al-Adha, the first time this has happened since 1981. (Photo by Oded Balilty/AP Photo) 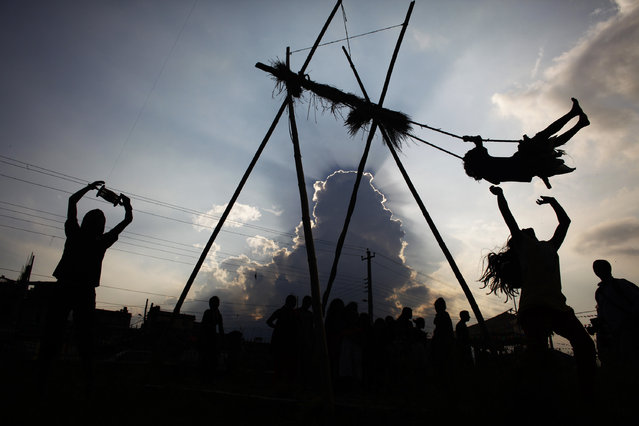 A Nepalese girl riding a swing and a boy flying a kite, left are silhouetted against the sky during the Dashain festival in Katmandu, Nepal, Monday, September 29, 2014. Dashain commemorates the victory of the Hindu gods and goddesses over demons and of the victory of good over evil. (Photo by Niranjan Shrestha/AP Photo) 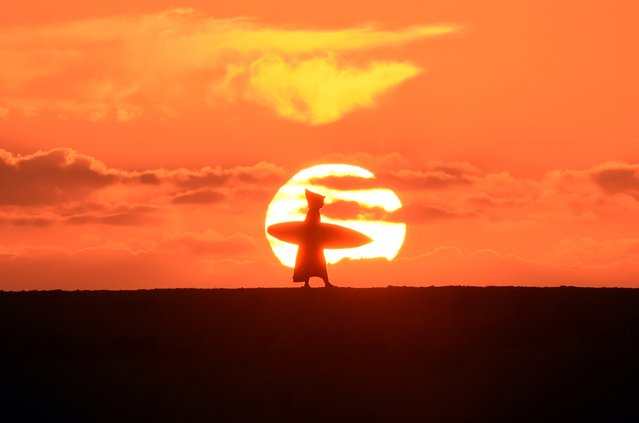