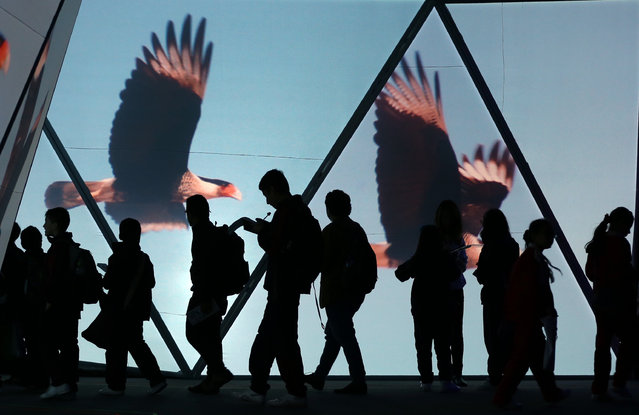 People walk past a screen showing videos of flying birds at the Macondo stand during the International Book Fair in Bogota, Colombia, Tuesday, April 28, 2015. (Photo by Fernando Vergara/AP Photo) 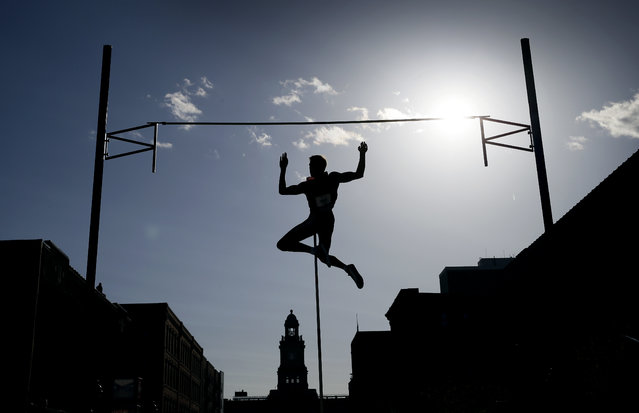 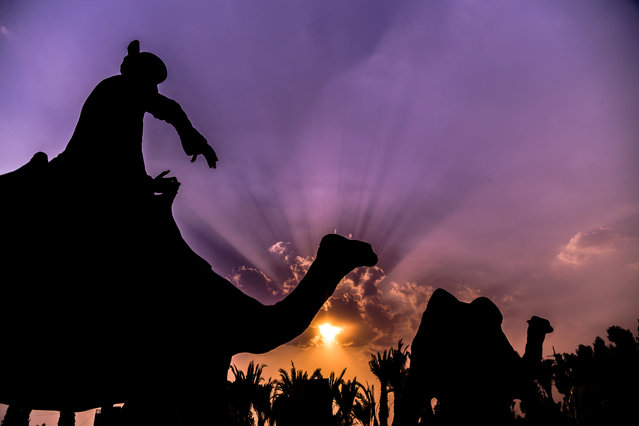 A view of the sculptures in the backdrop of sunset creating a dramatic view of the sky over Lahore, Pakistan, on April 24, 2015 evening. (Photo by Omer Saleem/EPA) 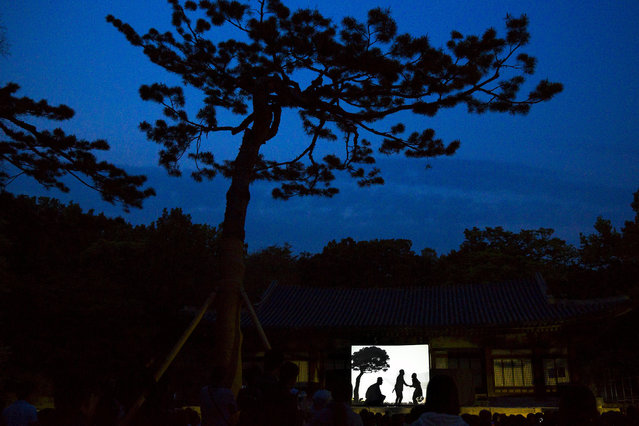 People watch a shadow play performance at Changgyeonggung Palace in Seoul, May 6, 2015. (Photo by Thomas Peter/Reuters) 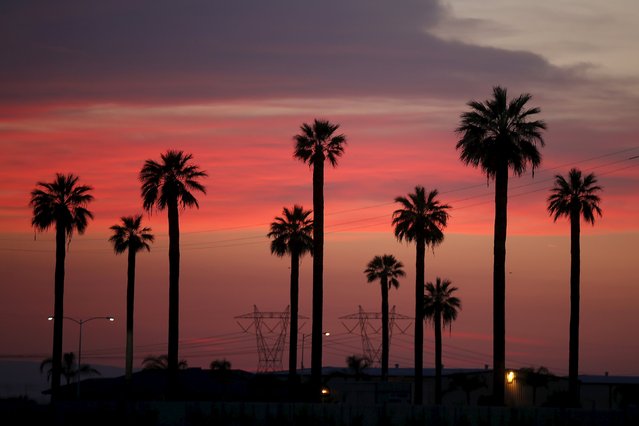 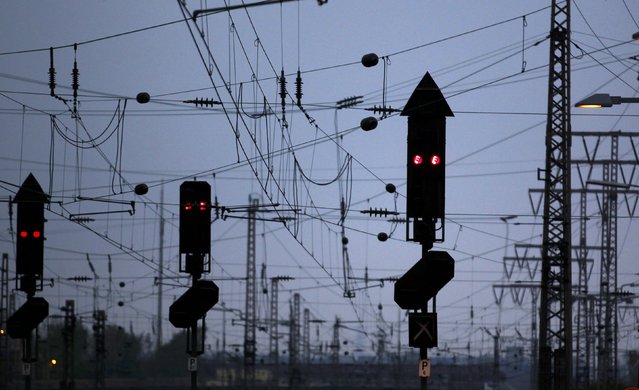 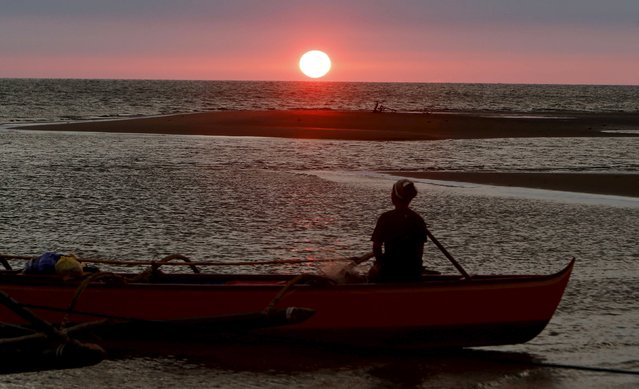 A fisherman watches sunset in the South China Sea, about 130 nautical miles from Scarborough Shoal in the coastal town of Masinloc, Zambales in northern Philippines April 21, 2015. (Photo by Erik De Castro/Reuters) 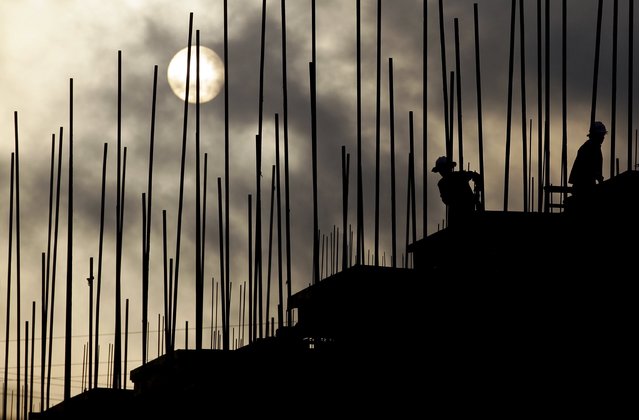 Labourers work during sunrise at a construction site of a residential complex in Puer, Yunnan province, April 23, 2015. (Photo by Wong Campion/Reuters) 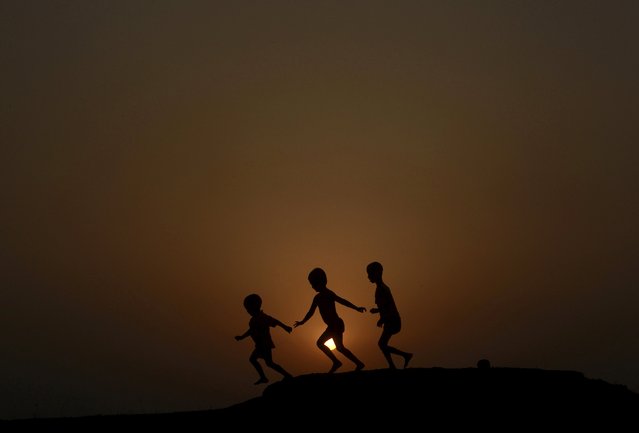 Children are silhouetted against the setting sun as they play on a ground on the outskirts of Agartala, capital of India's northeastern state of Tripura, April 23, 2015. (Photo by Jayanta Dey/Reuters) 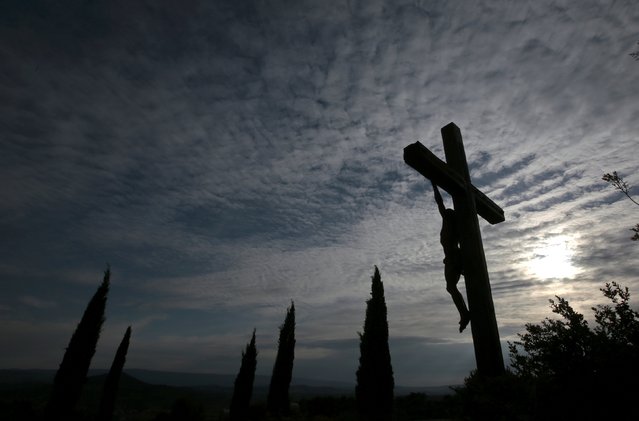 A crucifix is seen at sunset in the village of Saint Saturnin les Apt in the Luberon, southern France, April 29, 2015. (Photo by Eric Gaillard/Reuters) 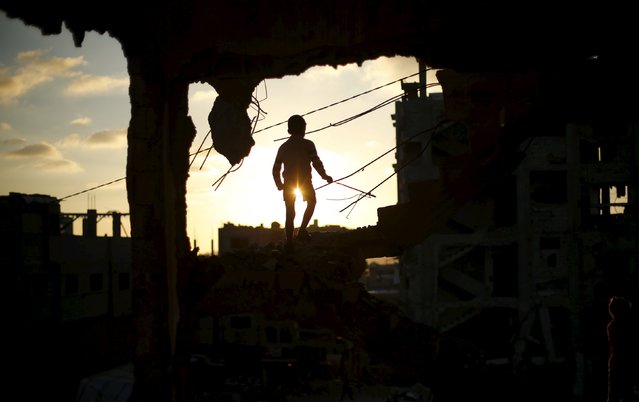 A Palestinian boy plays at a house that witnesses said was destroyed during the 50-day war last summer, in the east of Gaza City May 4, 2015. (Photo by Mohammed Salem/Reuters) 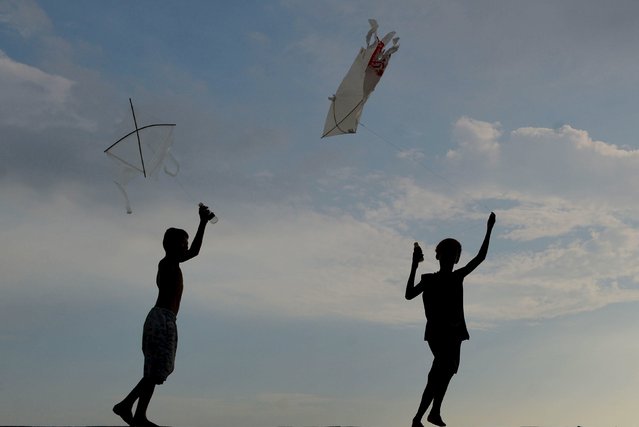 Boys are silhouetted as they fly their kites during summer school break in Navotas, Metro Manila May 6, 2015. Schools are closed for two months during summer break in the Philippines. (Photo by Ezra Acayan/Reuters) 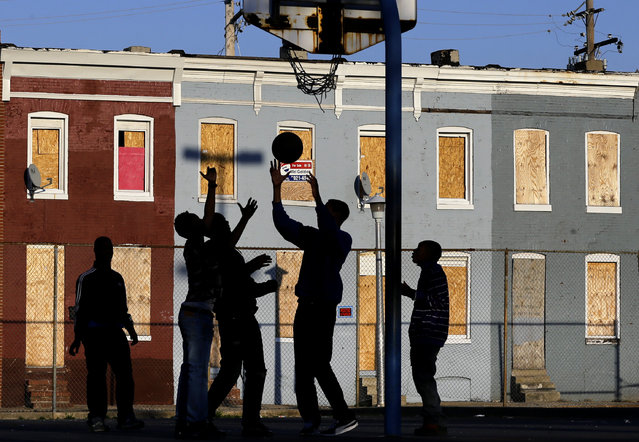 In this April 1, 2013 file photo, children play basketball at a park near blighted row houses in Baltimore. (Photo by Patrick Semansky/AP Photo) 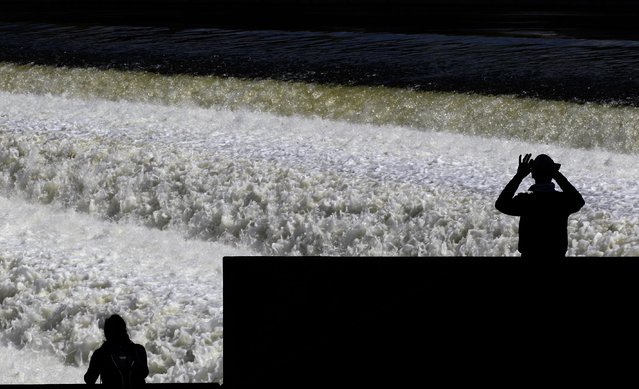 People are silhouetted in front of water running over an embankment in the river Lech in Landsberg, southern Germany, Thursday, May 7, 2015. (Photo by Karl-Josef Hildenbrand/AP Photo/DPA) 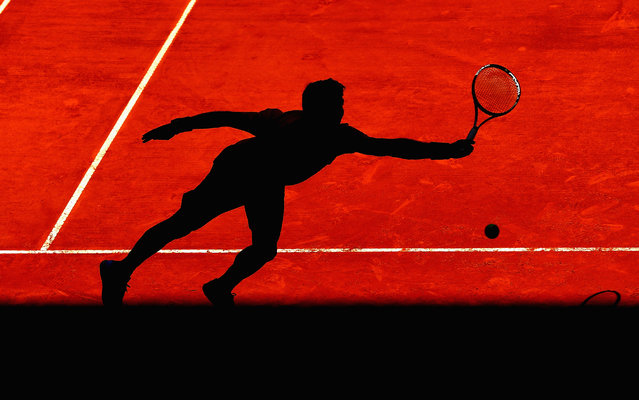 Fernando Verdasco of Spain in action against Marin Cilic of Croatia in their second round match during day five of the Mutua Madrid Open tennis tournament at the Caja Magica on May 6, 2015 in Madrid, Spain. (Photo by Clive Brunskill/Getty Images) 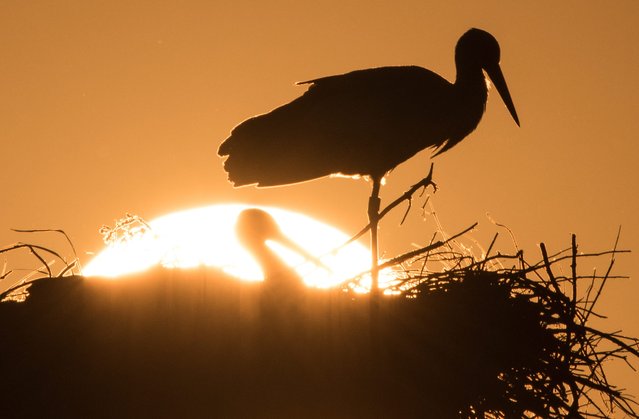 Two storks sit atop their aerie as the sun sets over Biebesheim, Germany, 22 April 2015. (Photo by Boris Roessler/EPA) 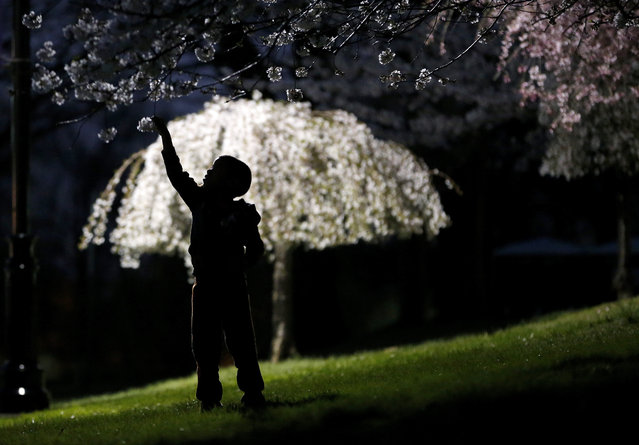 A young boy reaches up for a cherry blossom while a smaller tree is lit up by a a street lamp at Branch Brook Park, Tuesday, April 21, 2015, in Newark, N.J. (Photo by Julio Cortez/AP Photo) 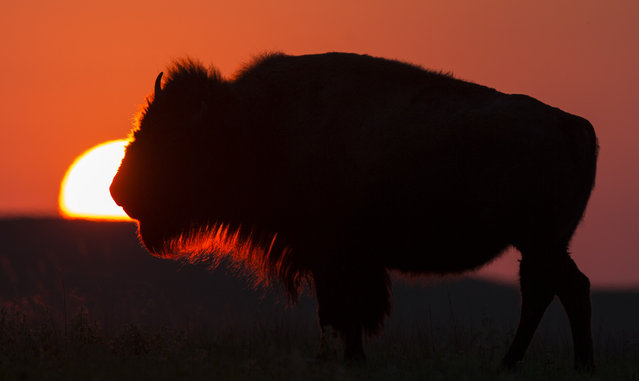 Framed by the setting sun, an American Bison grazes at the Tallgrass Prairie National Preserve on Tuesday, April 28, 2015, near Strong City, Kan. The buffalo herd at Tallgrass is one of the few herds of wild bison left in the United States. (Photo by Travis Heying/The Wichita Eagle via AP Photo) 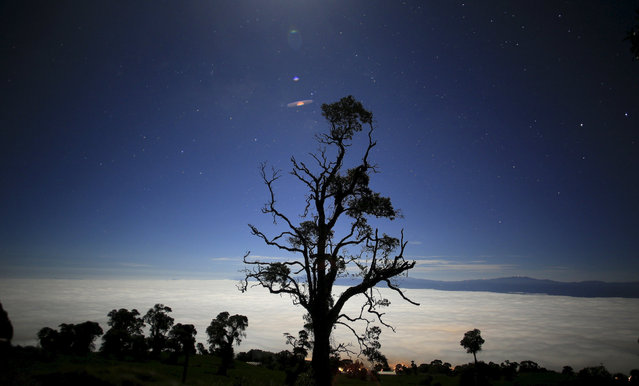 A bank of clouds is seen with the landscape in Gerardo de Irazu, Costa Rica May 5, 2015. (Photo by Juan Carlos Ulate/Reuters) 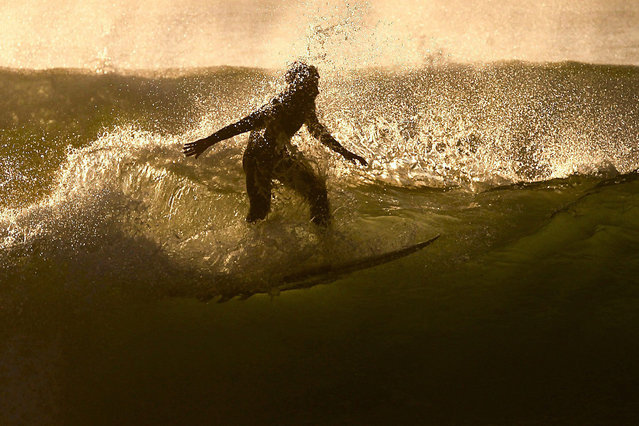 A picture made available on 08 May 2015 shows a surfer riding a wave while the sun starts setting at La Zurriola beach in San Sebastian, in the northern region of the Basque Country, Spain, 07 May 2015. (Photo by Juan Herrero/EPA) 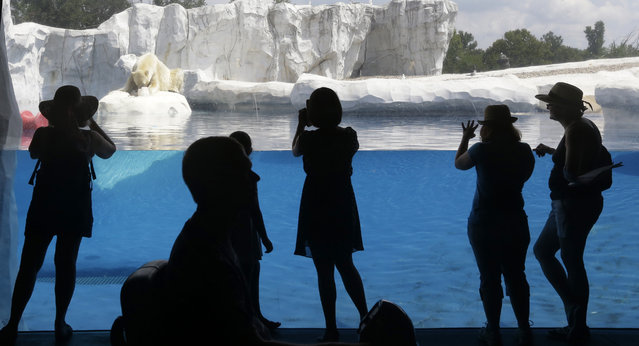 In this July 17, 2013 file photo, visitors to the Detroit Zoo watch as Nuka, an 8-year-old polar bear snacks on a frozen treat of fish incased in ice at the zoo in Royal Oak, Mich. (Photo by Carlos Osorio/AP Photo) 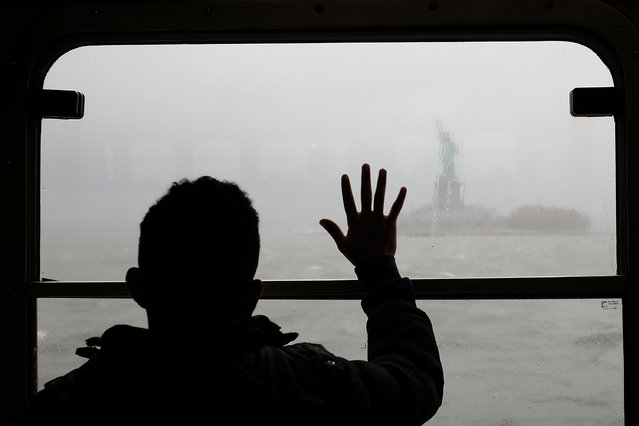 A man looks out at the Statue of Liberty in the rain and fog from the Staten Island Ferry on April 20, 2015 in New York City. (Photo by Spencer Platt/Getty Images)
Edit Del
13 May 2015 11:51:00, post received 0 comments
Publication archive:
←   →
Popular tags:
All tags
Last searches: