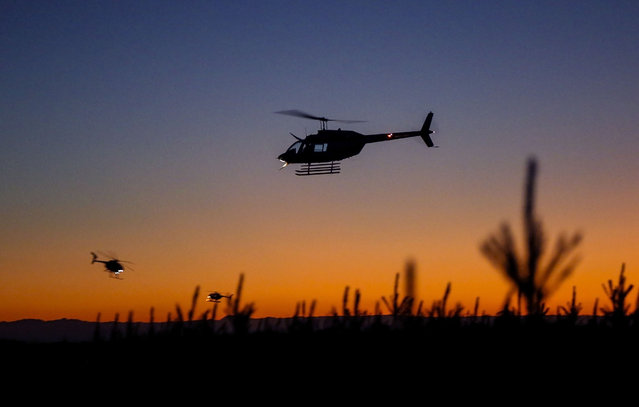 Helicopters fly over a corn field outside of Pahokee, Fla., before dawn Friday, February 20, 2015, in an attempt to keep the crops from freezing. The helicopters can force warm air down, displacing the colder air at ground level and raising the air temperature several degrees. (Photo by Lannis Waters/AP Photo/The Palm Beach Post) 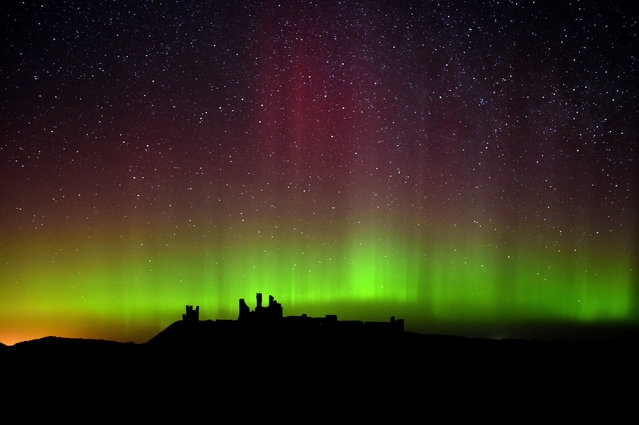 The aurora borealis, or the northern lights as they are commonly known are photographed, over Dunstanburgh Castle, in Northumberland, England, Tuesday February 17, 2015. (Photo by Owen Humphreys/AP Photo/PA Wire) 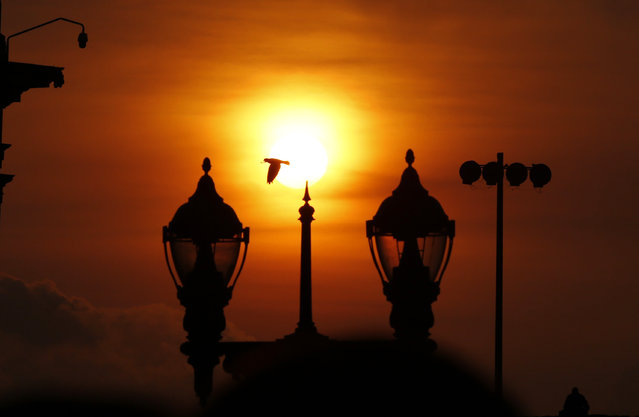 A bird is silhouetted against a sunset sky as it flies near Plaza Bolivar, in Bogota, Colombia, Wednesday, February 18, 2015. (Photo by Fernando Vergara/AP Photo) 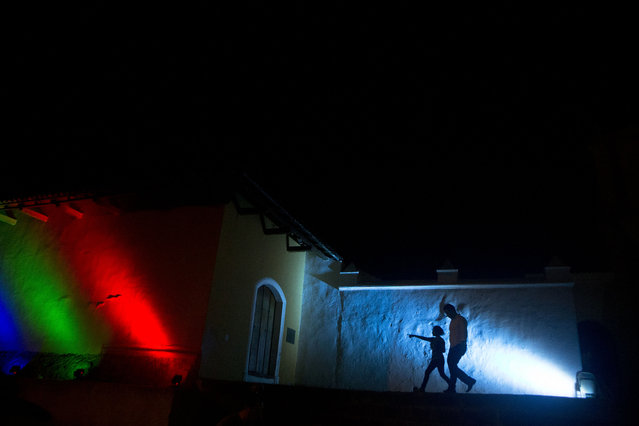 A man and child are silhouetted against the wall of the San Francisco Convent as they leave an event where a symbolic burial of violence took place, organized by the International Poetry Festival of Granada, in Granada, Nicaragua on Wednesday, February 18, 2015. Organizers said more than 100 poets from around the world are expected to participate in the week-long festival. (Photo by Esteban Felix/AP Photo) 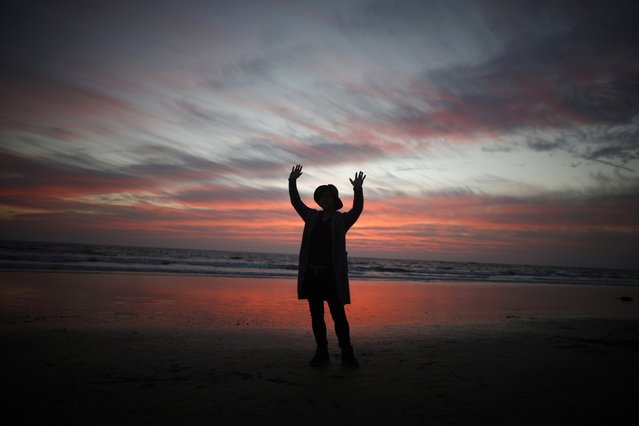 A man poses for a friend during sunset in Santa Monica, California February 5, 2015. (Photo by Lucy Nicholson/Reuters) 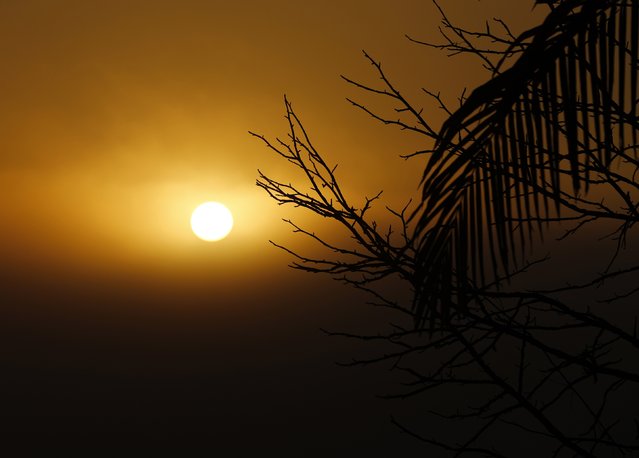 The morning sun rises through a bank of thick fog in Encinitas, California February 6, 2015. (Photo by Mike Blake/Reuters) 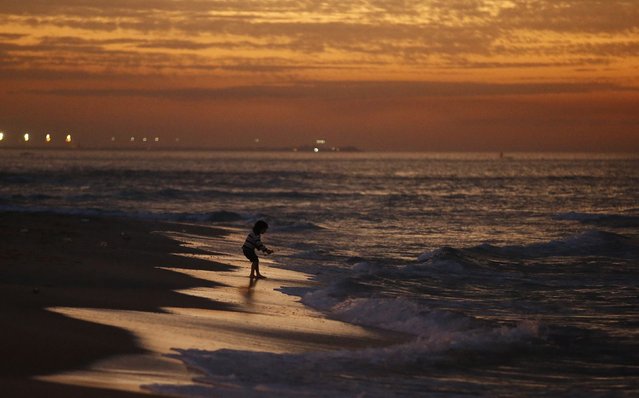 A Palestinian girl plays on the beach of Gaza City after sunset, February 6, 2015. (Photo by Mohammed Salem/Reuters) 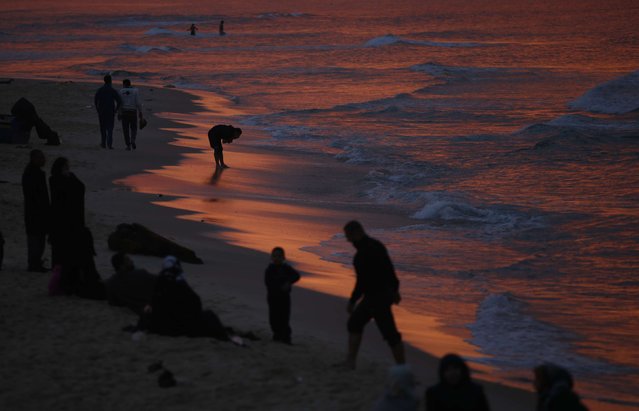 Palestinians walk along the beach of Gaza City after sunset, February 6, 2015. (Photo by Mohammed Salem/Reuters) 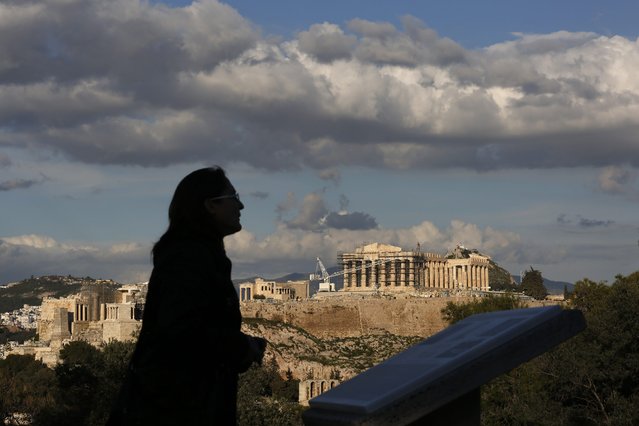 A woman is silhouetted as she visits Filopappou hill, opposite the archaeological site of Acropolis in Athens February 7, 2015. Greece said on Saturday it had no short-term cash problem and that it will hand its European Union partners a comprehensive plan next week for managing the transition to a new debt deal. (Photo by Kostas Tsironis/Reuters) 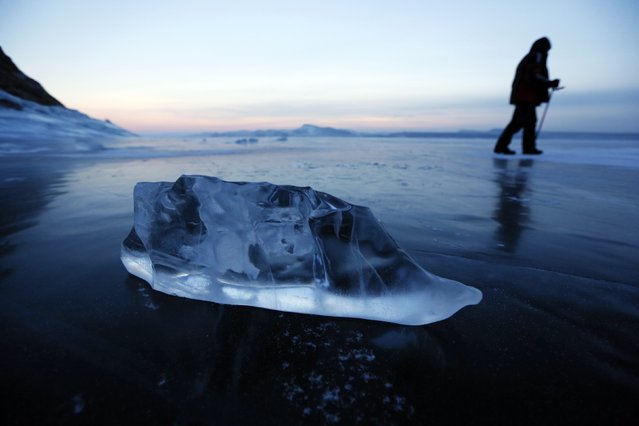 A fisherman walks on the frozen surface of the Yenisei River while checking ice holes near the village of Anash, Novosyolovsky District of Krasnoyarsk region, Russia February 7, 2015. (Photo by Ilya Naymushin/Reuters) 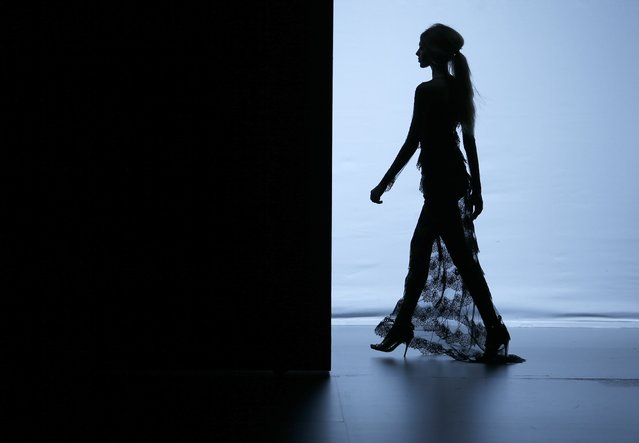 A model is silhouetted presenting a creation from Juana Martin's Fall/Winter 2015 collection, during the Mercedes-Benz Fashion Week in Madrid, February 8, 2015. (Photo by Javier Barbancho/Reuters) 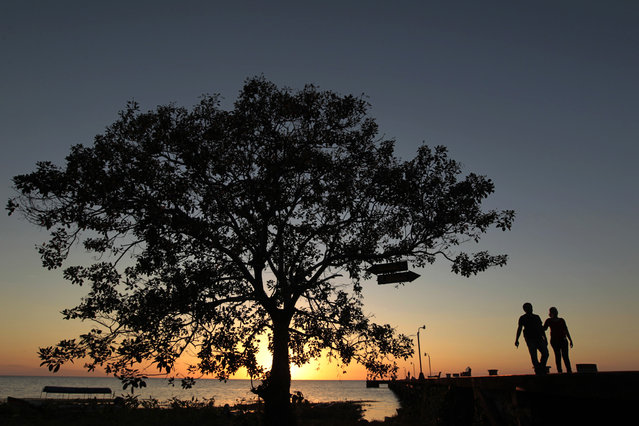 A couple walks on the jetty of San Miguelito town, Nicaragua during sunset February 9, 2015. (Photo by Oswaldo Rivas/Reuters) 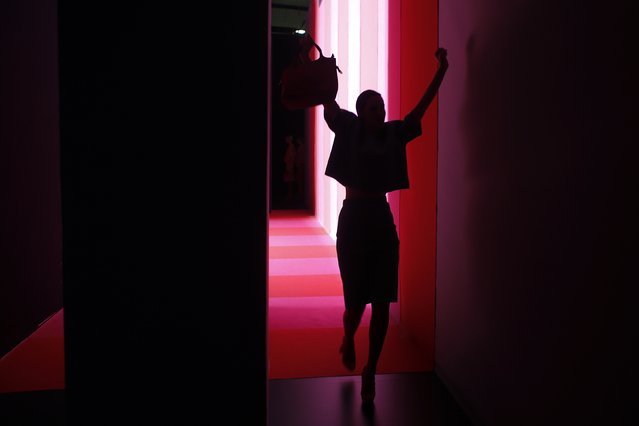 A model raises her arms as she walks backstage after presenting a creation from Agatha Ruiz de la Prada's Fall/Winter 2015 collection during the Mercedes-Benz Fashion Week in Madrid February 10, 2015. (Photo by Susana Vera/Reuters) 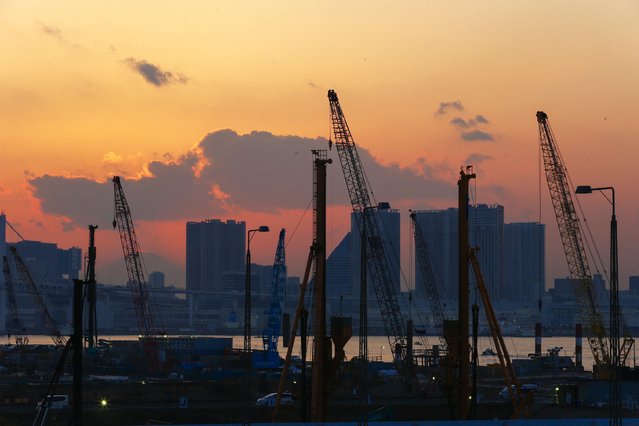 Cranes are pictures against the sunset at a construction site in the Toyosu district in Tokyo, February 12, 2015. (Photo by Thomas Peter/Reuters) 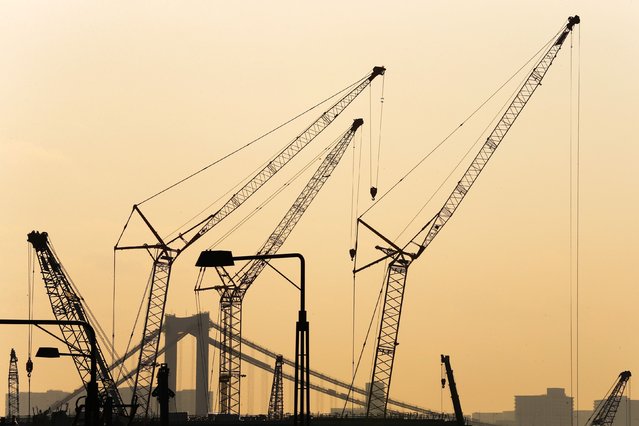 Cranes are pictured against the sunset at construction site in the Toyosu district in Tokyo, February 12, 2015. (Photo by Thomas Peter/Reuters) 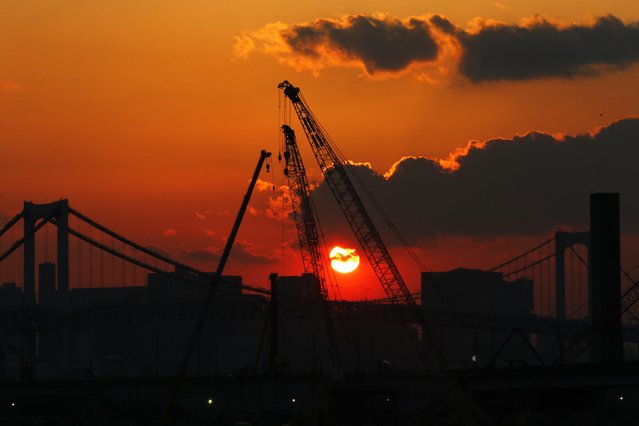 Cranes are pictured against the sunset at a construction site in the Toyosu district in Tokyo, February 12, 2015. (Photo by Thomas Peter/Reuters) 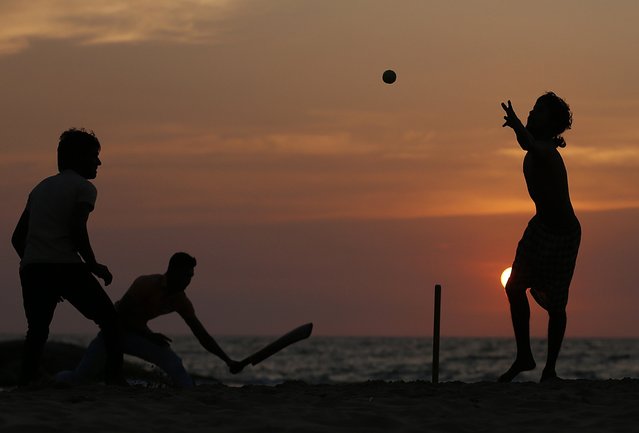 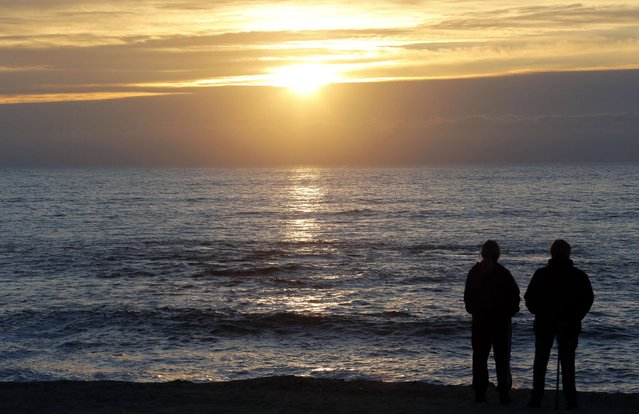 People walk near the beach front along the Atlantic Ocean coast during sunset in Cap Ferret, southwestern France, February 19, 2015. (Photo by Regis Duvignau/Reuters) 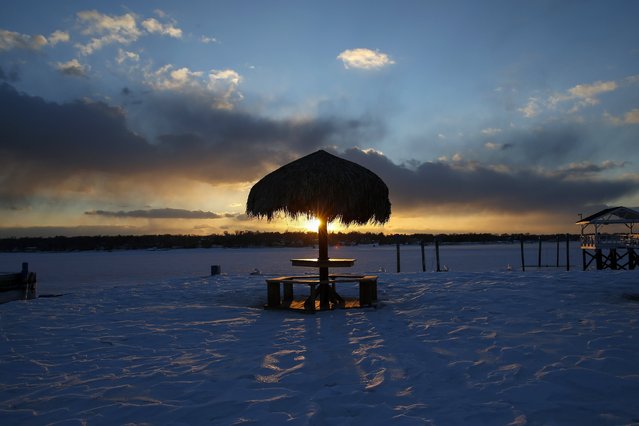 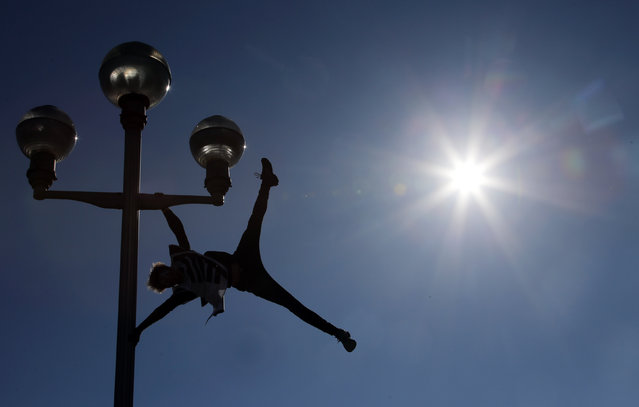 An artist performs during the flower parade of the 131st Carnival of Nice February 18, 2015. (Photo by Eric Gaillard/Reuters) 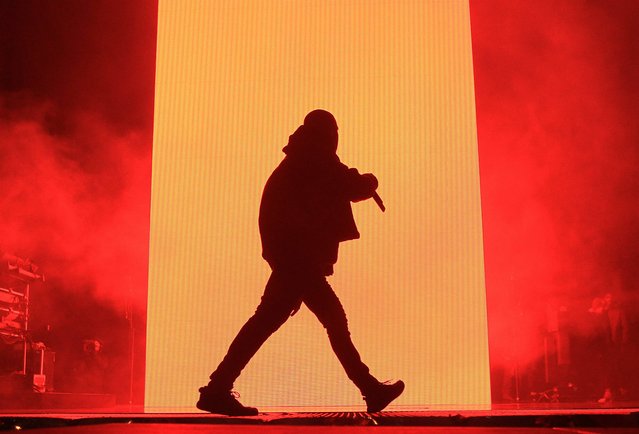 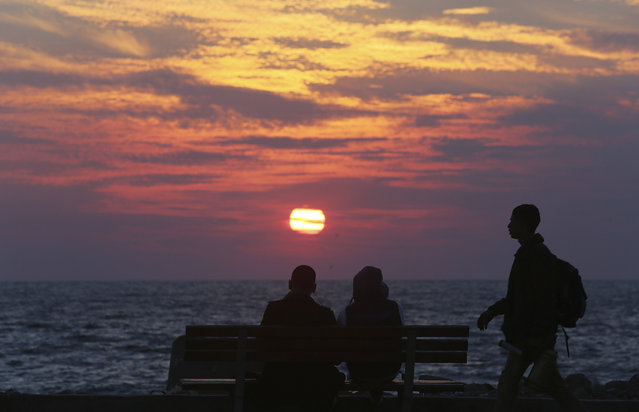 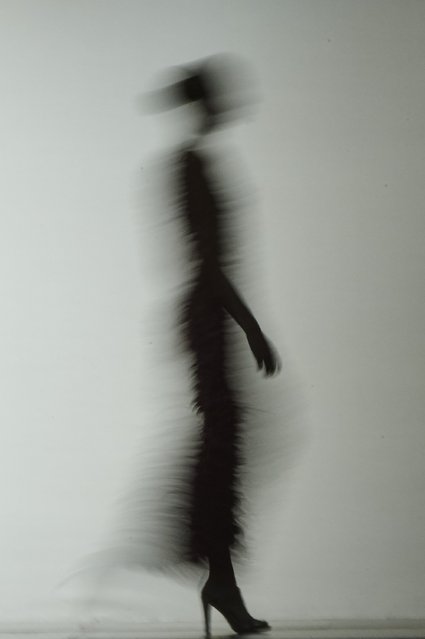 A model walks the runway at the Esther Noriega show during Madrid Fashion Week Fall/Winter 2015/16 at Ifema on February 9, 2015 in Madrid, Spain. (Photo by Carlos Alvarez/Getty Images) 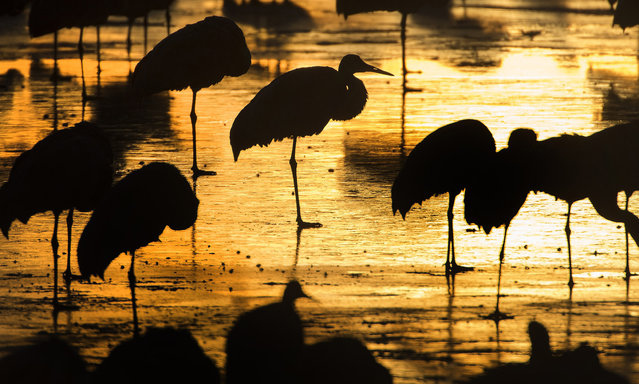 In this Friday, February 6, 2015 photo, sandhill cranes begin to stir after resting for the night at a roosting location along their winter migration route in Cecilia, Ky. According to counts made by biologists with the Kentucky Fish and Wildlife Resources, about 12,000 of the birds have stopped in Cecilia this week during their winter northward migration on their way to their nesting grounds in the Great Lakes region. (Photo by David Stephenson/AP Photo) 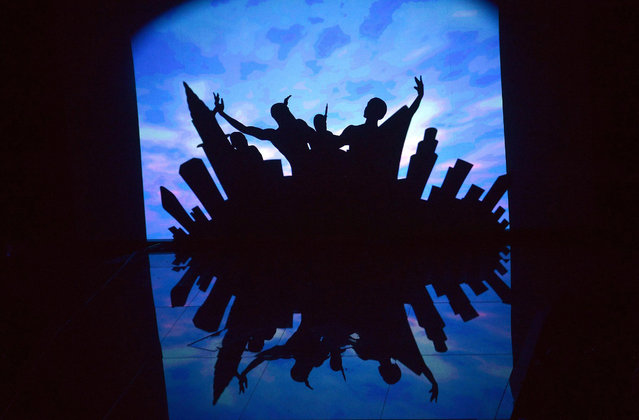 US dancers of the Pilobolus Dance Theater perform on stage during the Sanremo Italian Song Festival, at the Ariston theater in Sanremo, Italy, 11 February 2015. (Photo by Ettore Ferrari/EPA) 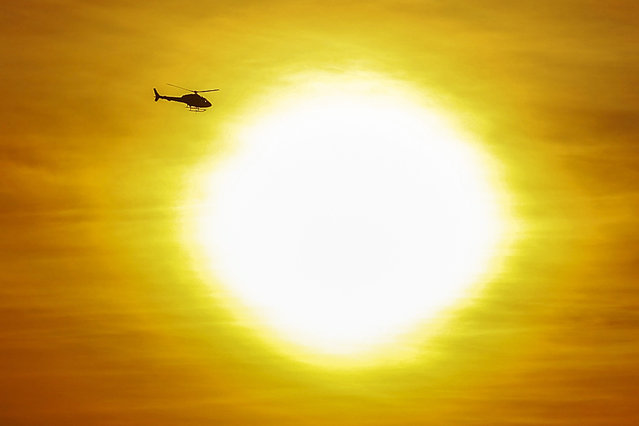