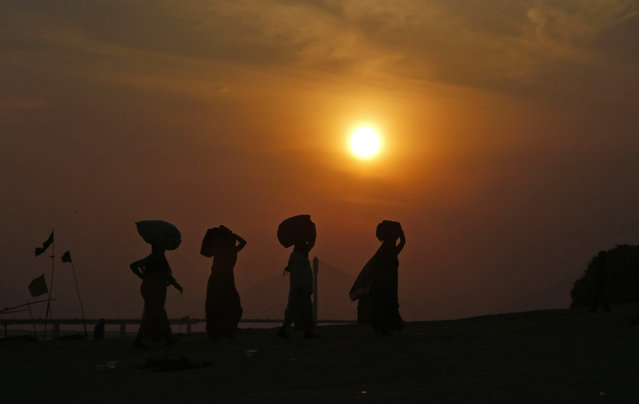 Hindu devotees walk on the banks of the Sangam in Allahabad, India, Tuesday, March 17, 2015. Allahabad, on the confluence of the rivers Ganges, Yamuna and the mythical Saraswathi, is one of Hinduism's important centers. (Photo by Rajesh Kumar Singh/AP Photo) 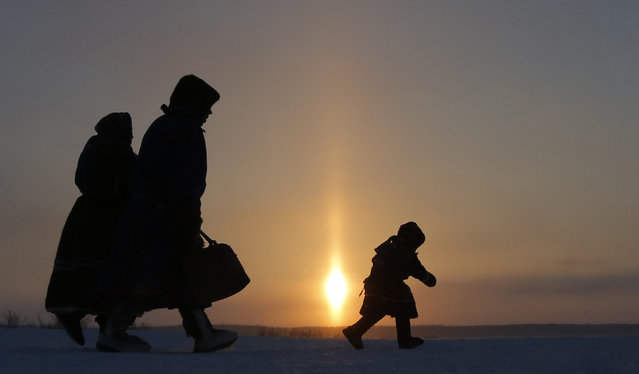 In this photo taken on Sunday, March 15, 2015, a Nenets family walks after the Reindeer Herder's Day holiday in the city of Nadym, in Yamal-Nenets Region, 2500 km (about 1553 miles) northeast of Moscow, Russia. Some participants at the Reindeer Herder's Day travel hundreds of kilometers across the frozen tundra to attend the competition in the region in northern Siberia, more than half of the territory of which lies above the Arctic Circle. (Photo by Dmitry Lovetsky/AP Photo) 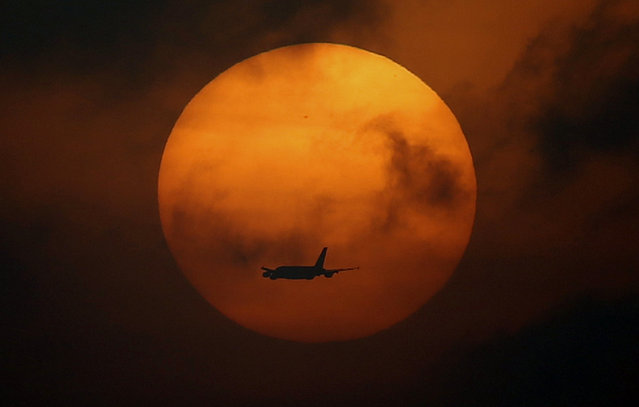 An airplane flies while is seening from the track of Meydan racecourse during preparations for the Dubai World Cup 2015 in Dubai, United Arab Emirates, March 24, 2015. (Photo by Ali Haider/EPA) 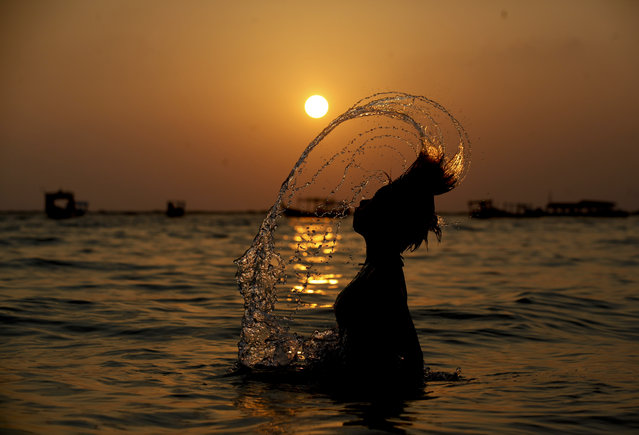 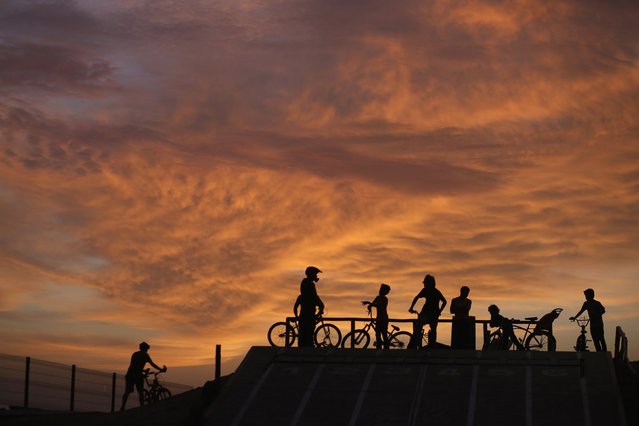 Cyclists wait to perform stunts during sunset at a park in Lima's Miraflores district, February 23, 2015. (Photo by Mariana Bazo/Reuters) 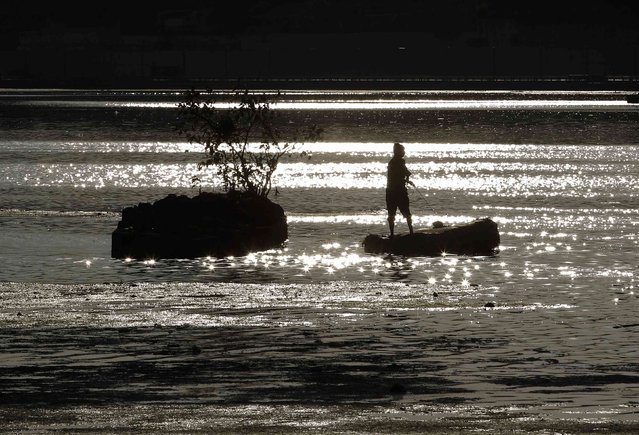 A fisherman is silhouetted against the backdrop of Sabarmati river as he fishes on a temporary raft in the western Indian city of Ahmedabad March 17, 2015. (Photo by Amit Dave/Reuters) 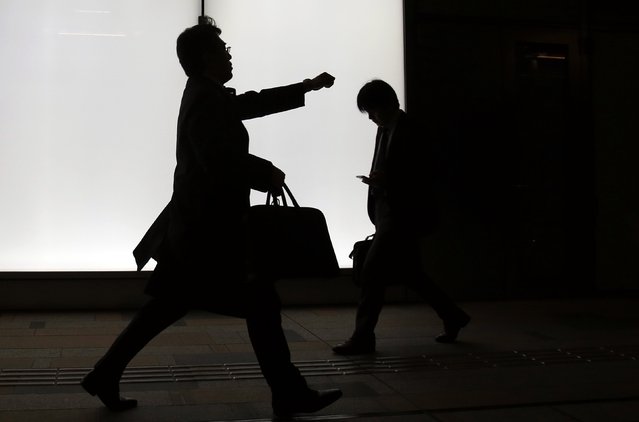 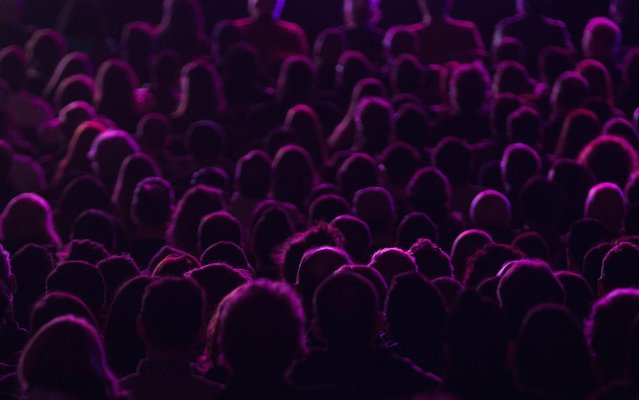 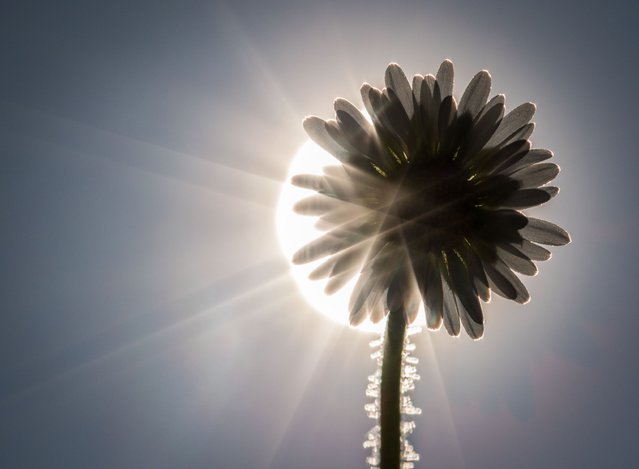 Sun shines through the petals of a daisy in Frankfurt am Main, western Germany, on March 9, 2015. (Photo by Frank Rumpenhorst/AFP Photo/DPA) 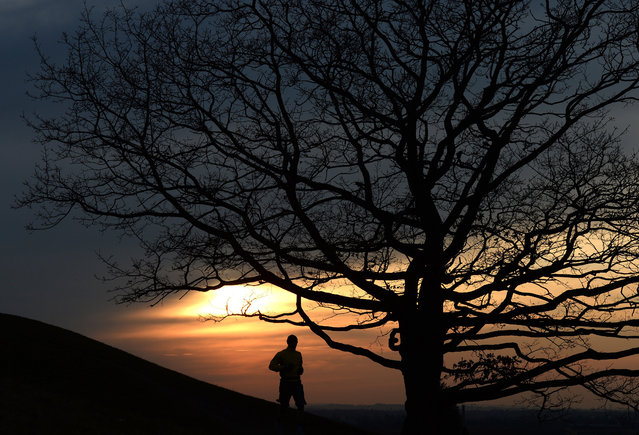 A jogger runs during the sunset after a warm spring day on March 16, 2015, in the Olympic park in Munich, southern Germany. (Photo by Christof Stache/AFP Photo) 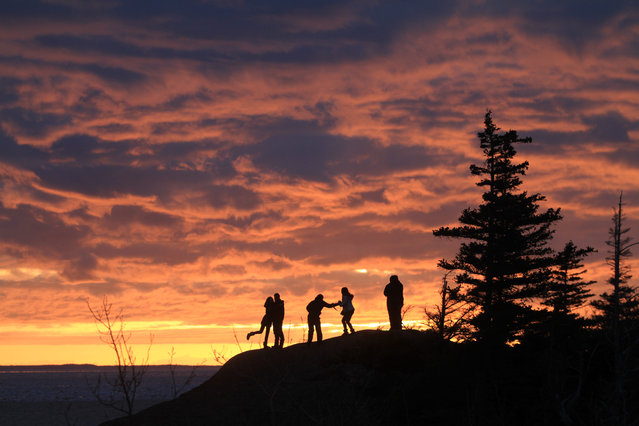 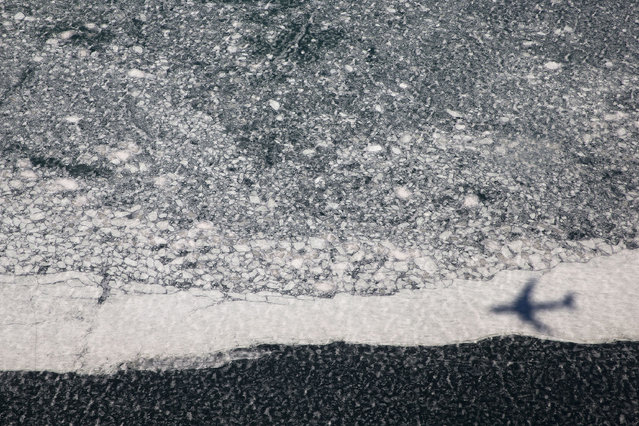 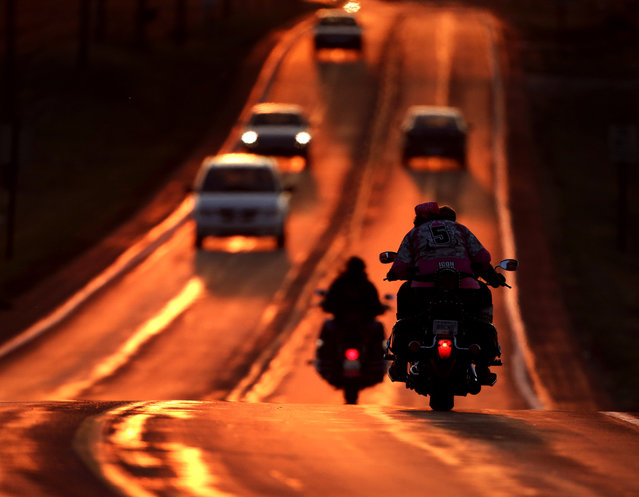 Motorcyclists take advantage of warmer weather to travel on a highway illuminated by the setting sun on the first full day of spring Saturday, March 21, 2015, in Lawrence, Kan. (Photo by Charlie Riedel/AP Photo) 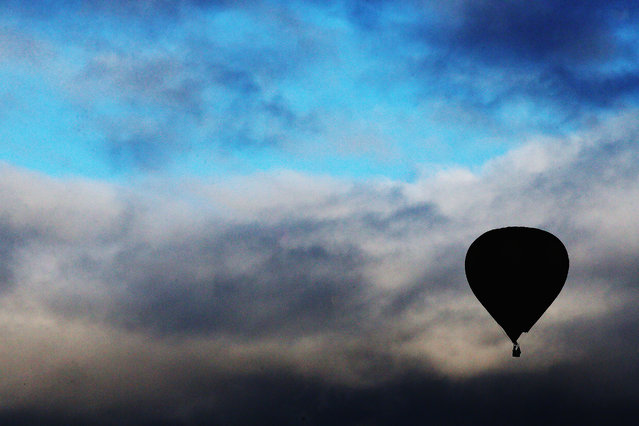 A hot air balloon rises over Innes Common Park during the Balloons over Waikato Festival on March 27, 2015 in Hamilton, New Zealand. Balloon enthusiasts from around New Zealand and the world gather annually for the five-day event in Waikato, NZ. (Photo by Hannah Peters/Getty Images) 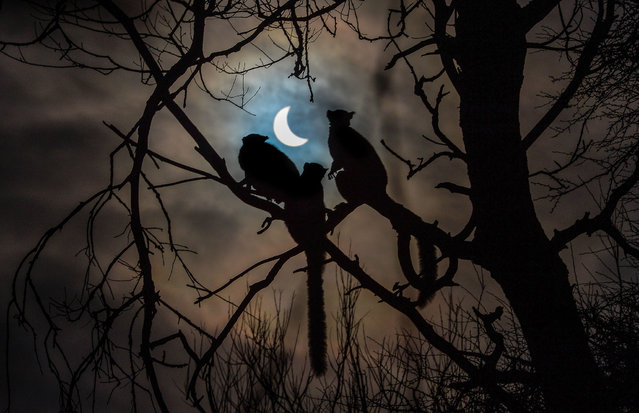 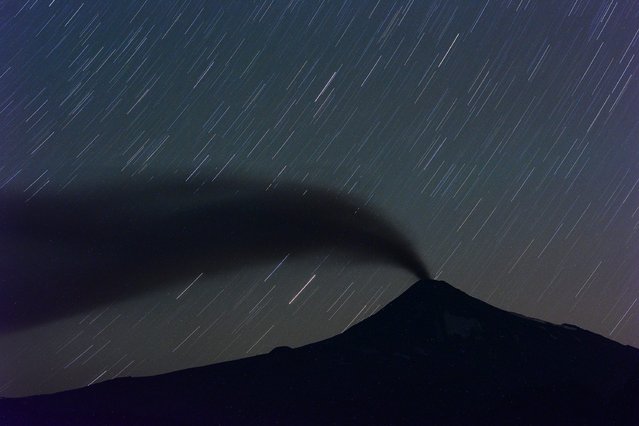 A long exposure picture shows a general view of Villarrica volcano seen at night from Pucon, Cautin Province, some 780 km south of Santiago de Chile, Chile, 22 March 2015. Authorities mantain the orange alert level after the increasing of the activity of the volcano, which could generate an eruption. (Photo by Felipe Trueba/EPA) 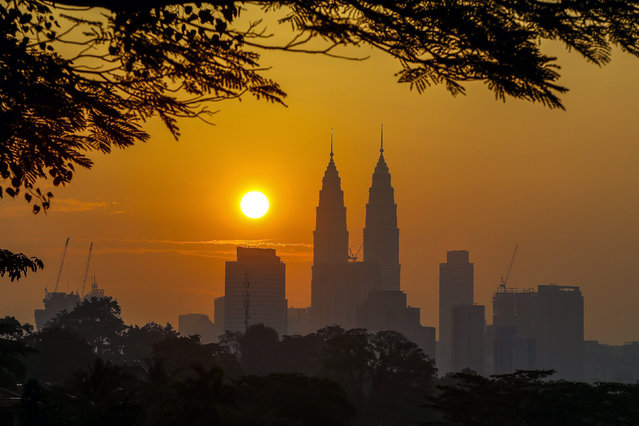 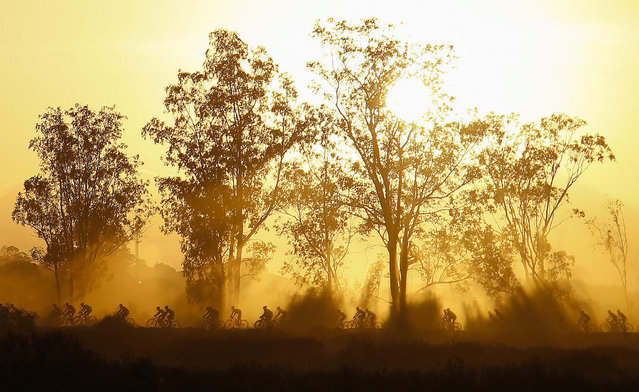 Cyclists competes during the 111 kilometer stage four of the Absa Cape Epic mountain bike team stage race in Worcester, South Africa, 19 March 2015. The Absa Cape Epic is considered one of the toughest mountain bike races in the world. The multi stage race sees 1200 cyclists riding in pairs over 700km and climbing more than 16000 meters, twice the high of Mount Everest over 8 days of racing. (Photo by Nic Bothma/EPA) 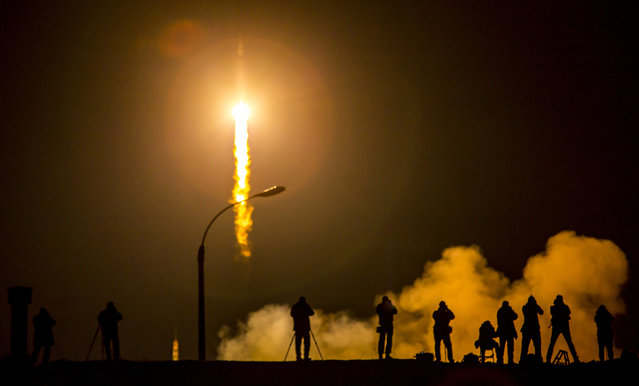 In this handout provided by NASA, The Soyuz TMA-16M spacecraft is seen as it launches to the International Space Station with Expedition 43 NASA Astronaut Scott Kelly, Russian Cosmonauts Mikhail Kornienko, and Gennady Padalka of the Russian Federal Space Agency (Roscosmos) onboard Saturday, March 28, 2015. (Photo by Bill Ingalls/NASA via Getty Images) 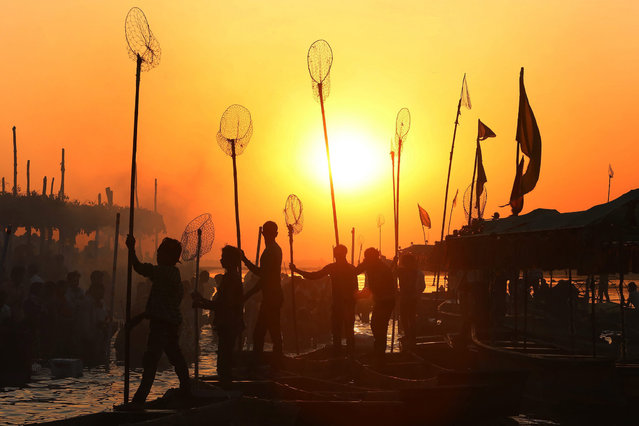 Indian fishermen are silhuetted by the rising sun as they prepare for an early morning catch at the banks of Narmada river in Nemawar district Dewas, 200 kilometers from Bhopal, Madhya Pradesh, India 20 March 2015. (Photo by Sajneev Gupta/EPA) 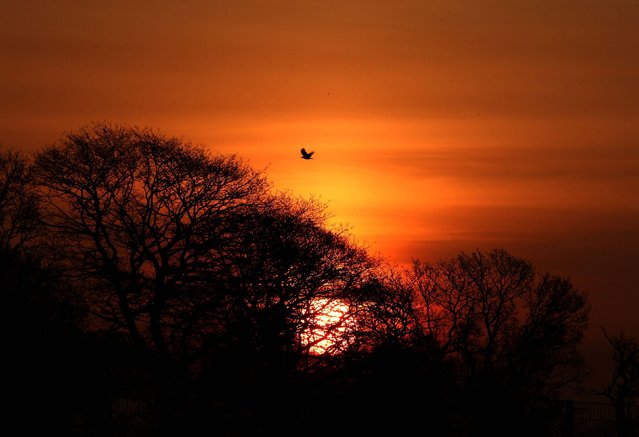 The sun rises over trees at Bannockburn, Scotland on March 19, 2015, as Britain was placed on a health alert because a potentially dangerous cloud of air pollution is blowing over the country. Experts said the smog could cause fatal asthma attacks and have warned the elderly and those with health problems to be cautious. (Photo by Andrew Milligan/PA Wire)
Edit Del
31 Mar 2015 13:20:00, post received 0 comments
Publication archive:
←   →
Popular tags:
All tags
Last searches: