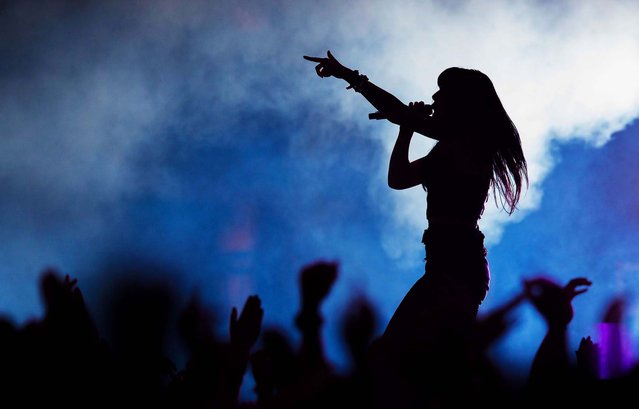 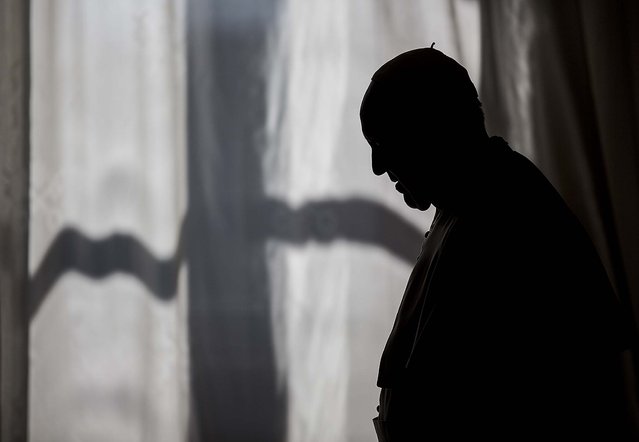 Pope Francis leaves after a meeting with Prime Minister of Albania Edi Rama and his wife Linda, at the Vatican, on April 24, 2014. (Photo by Alessandra Tarantino/Pool) 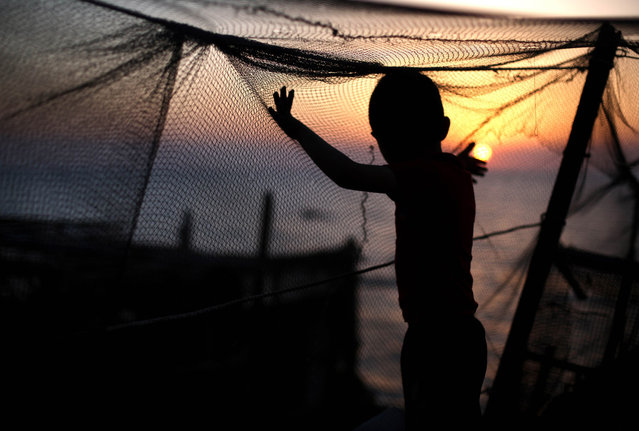 A Palestinian child plays with a fishing net as the sun sets over Gaza City on April 28, 2014. (Photo by Mohammed Abed/AFP Photo) 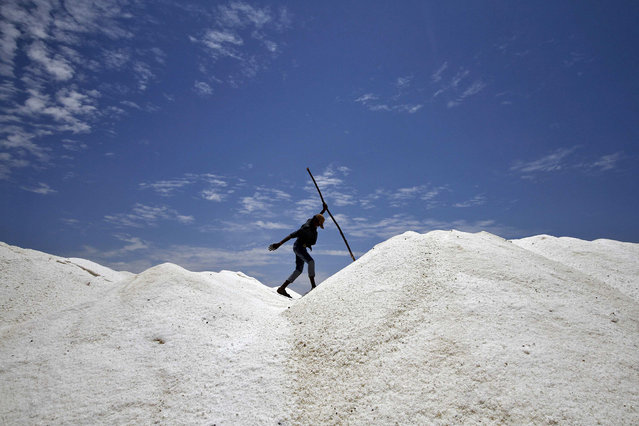 A worker walks through a salt pan on the eve of May Day or Labour Day on the outskirts of the southern Indian city of Chennai April 30, 2014. India is the third largest salt producing country in the world after China and U.S. with global annual production about 230 million tonnes, according to government data. (Photo by Reuters/Babu) 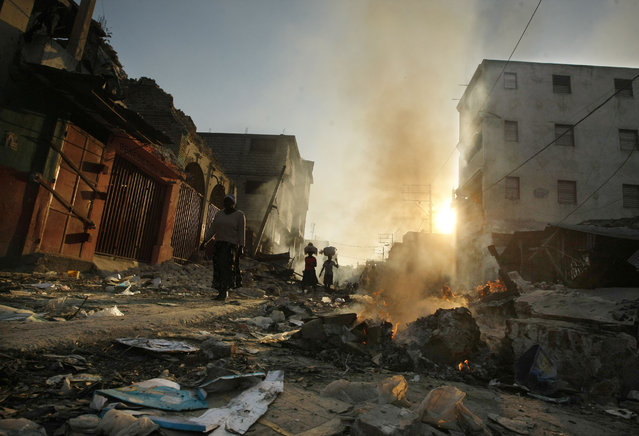 People walk through fire and rubble in the market area in Port-au-Prince, Monday, January 18, 2010. On the streets, people are still dying, pregnant women are giving birth and the injured are showing up in wheelbarrows and on people's backs at hurriedly erected field hospitals after Tuesday's earthquake. (Photo by Gerald Herbert/AP Photo) 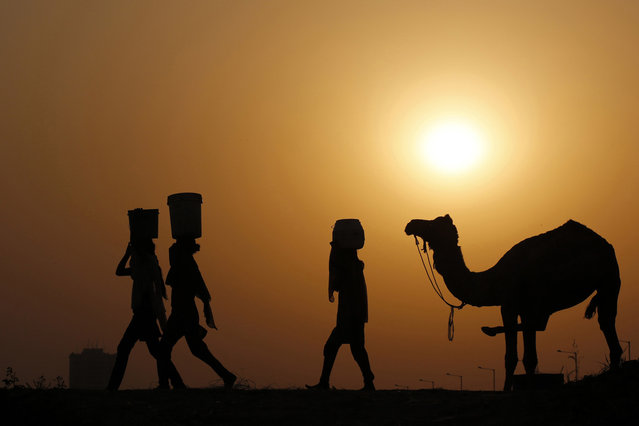 Girls carrying buckets filled with water are silhouetted against the setting sun as they walk past a camel on the banks of river Yamuna in New Delhi May 1, 2014. (Photo by Anindito Mukherjee/Reuters) 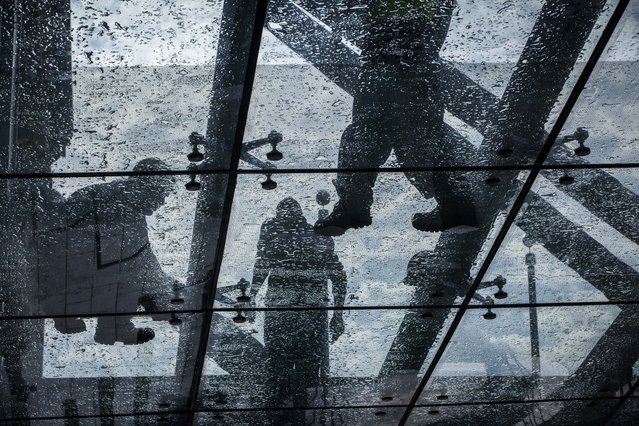 Workers tighten the bolts on the glass porte-cochhre(awning) of the new Marriott Marquis, next to the Convention Center, opens its doors on Thursday, May 1, in Washington, DC. on May 1, 2014. ( Photo by Jeffrey MacMillan) 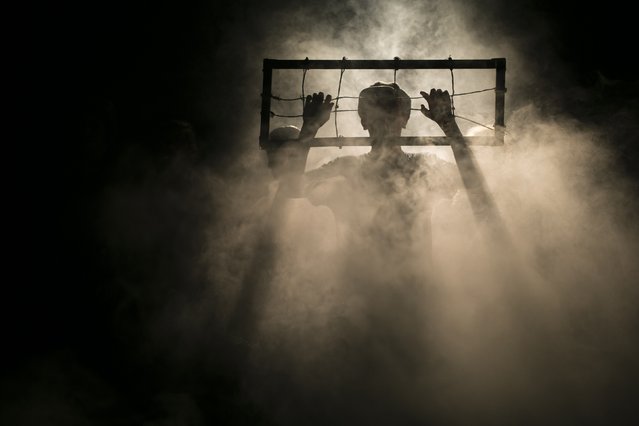 Israeli teenager, Stav (front) performs during a dress rehearsal, part of an educational project, in Shoham near Tel Aviv March 23, 2014. Testimony Theater Project, established by Ezra and Irit Dagan in 2000, brings together teenagers, between the ages of 13 to 15, and Holocaust survivors, who share personal experiences that are adapted into a collaborative theater production in which they perform. (Photo by Amir Cohen/Reuters) 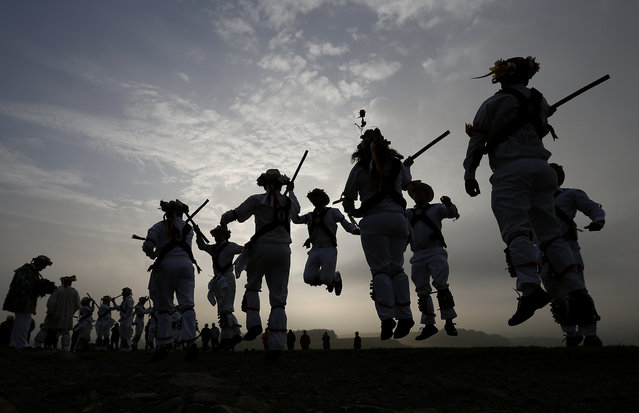 Leicester Morris Men dance at Bradgate Park in Newtown Linford, central England May 1, 2014. The May Day Morris celebration is a traditional rite thought to be connected to changing seasons and fertility. (Photo by Darren Staples/Reuters) 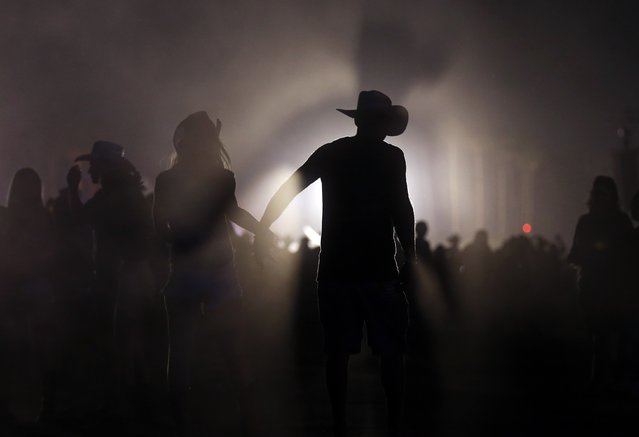 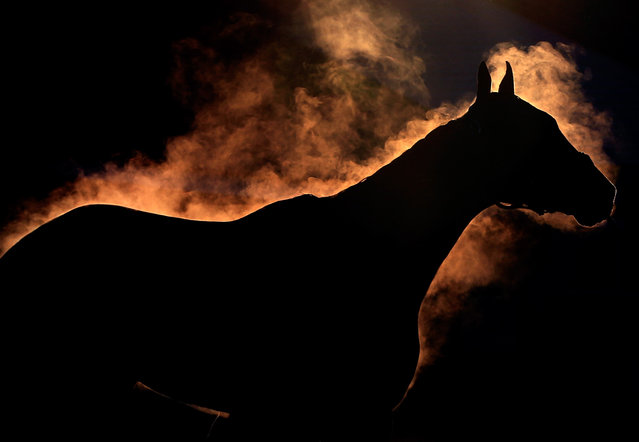 A horse gives off steam as it is bathed during early morning workouts ahead of the 140th Kentucky Derby at Churchill Downs on May 2, 2014 in Louisville, Kentucky. (Photo by Jamie Squire/Getty Images) 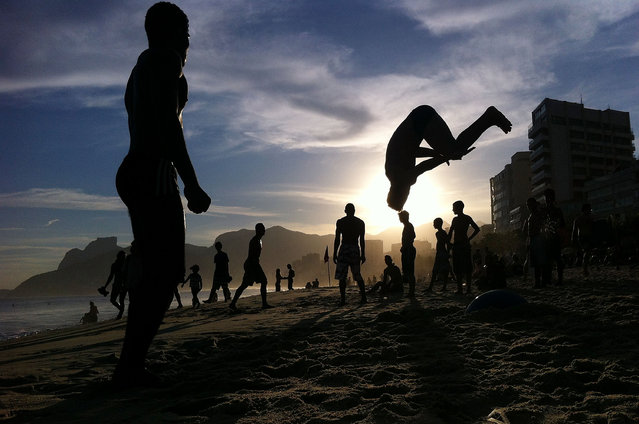 A man performs a flip on Ipanema Beach on May 1, 2014 in Rio de Janeiro, Brazil. The 2014 FIFA World Cup starts in Brazil on June 12. (Photo by Mario Tama/Getty Images) 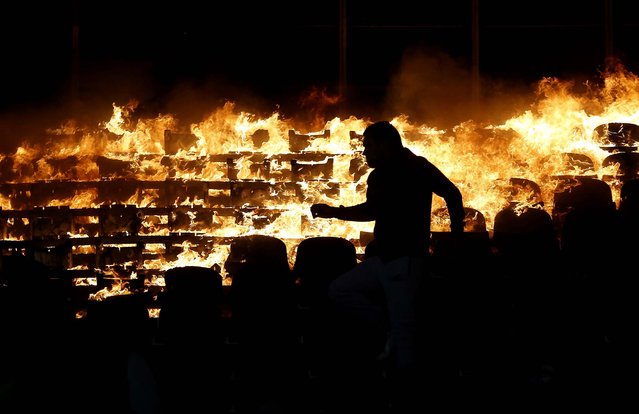 A Red Star fan leaves the stadium past burning seats after a Serbian National soccer league derby match against Partizan, in Belgrade, Serbia, on March 26, 2014. Thousands of policemen have been deployed throughout Belgrade to prevent possible violence during the match between bitter rivals Red Star and Partizan. (Photo by Darko Vojinovic/Associated Press) 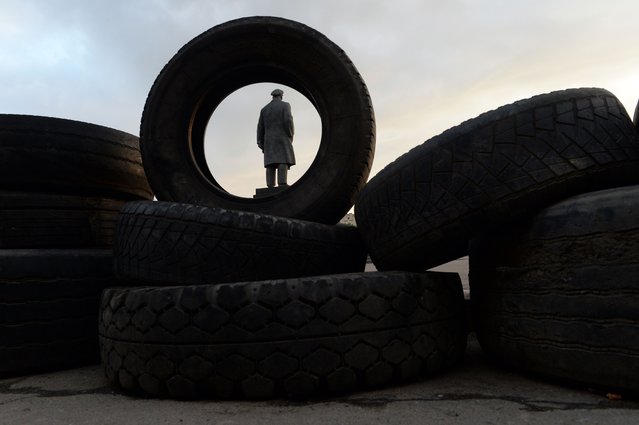 A statue of Soviet leader Vladimir Lenin, visible through a tire, stands on the square outside a regional administration building seized by pro-Russian separatists in the eastern Ukrainian city of Slavyansk on April 30, 2014. Ukraine's armed forces are on “full combat alert” against a possible Russian invasion, Kiev said Wednesday, as authorities admitted they were “helpless” to prevent pro-Kremlin insurgents tightening their grip on the increasingly chaotic east of the country. (Photo by Vasily Maximov/AFP Photo) 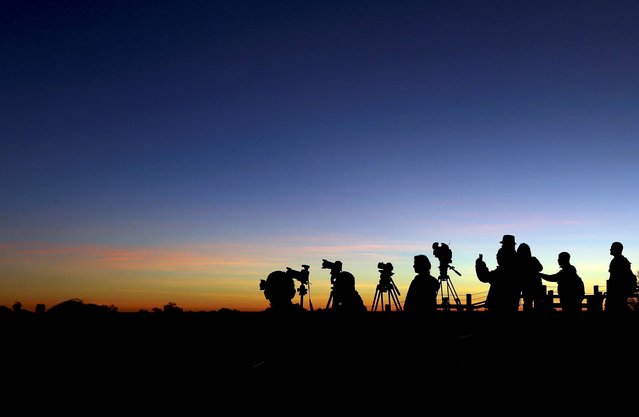 Tourists sets up cameras to photograph the sunrise in Uluru, Australia, Tuesday, April 22, 2014. The Duke and Duchess of Cambridge will visit Uluru Tuesday during their three-week tour of Australia and New Zealand, the first official trip overseas with their son, Prince George. (Photo by Rob Griffith/AP Photo) 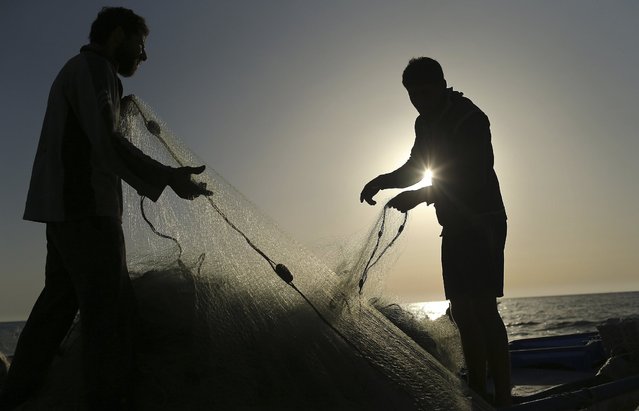 Palestinian fishermen pull their net at the beach of Gaza City April 28, 2014. (Photo by Mohammed Salem/Reuters) 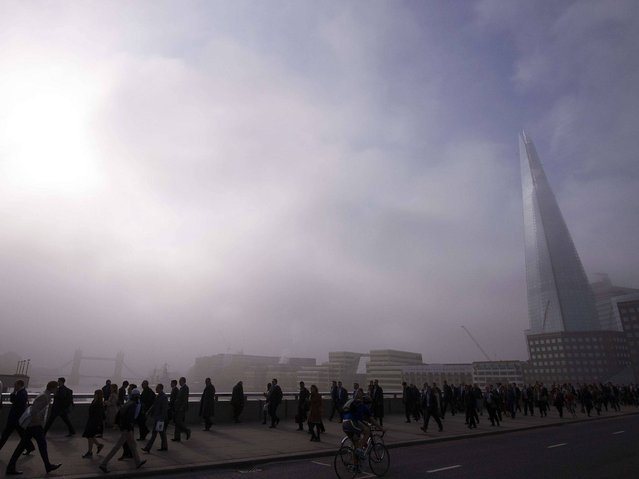 Commuters walk across London Bridge in the early morning fog in central London, on April 30, 2014, as a strike by underground train staff affected a second morning's rush-hour. The strike action was called by the RMT union in protest at plans to close all ticket offices across the network, which it says will jeopardise hundreds of jobs and safety standards. (Photo by Carl Court/AFP Photo) 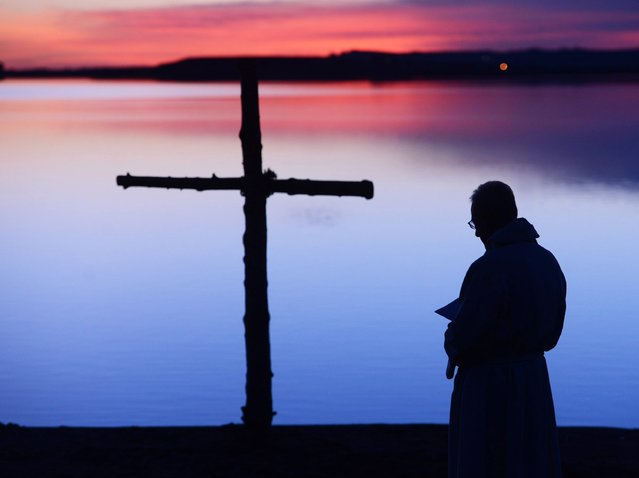 The Rev. Mark Twietmeyer, of Trinity Lutheran Church, stands before the sermon at the Boulder Reservoir for the Easter Sunrise Service on Sunday, April 20, 2014, in Boulder, Colo. (Photo by Cliff Grassmick/AP Photo/The Daily Camera) 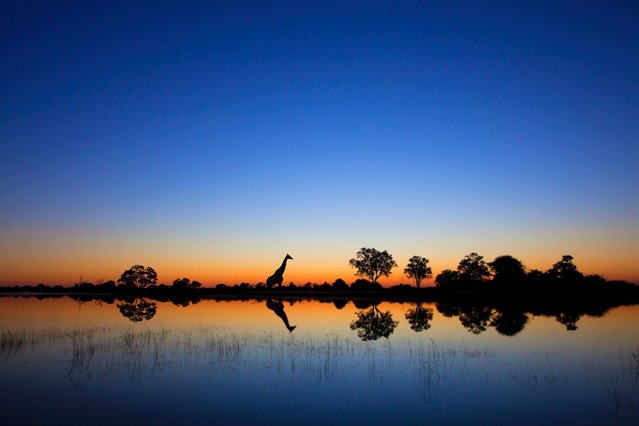 A majestic giraffe – the world's tallest animal – wandered across a hot delta at sunrise to complete this stunning scene. (Photo by Solent News and Photo Agency) 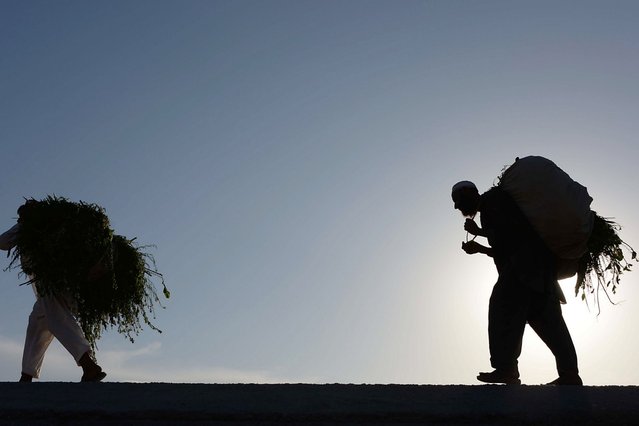 Afghan men carry firewood over their shoulders as they walk through the outskirts of Jalalabad, on April 24, 2014. (Photo by Noorullah Shirzada/AFP Photo) 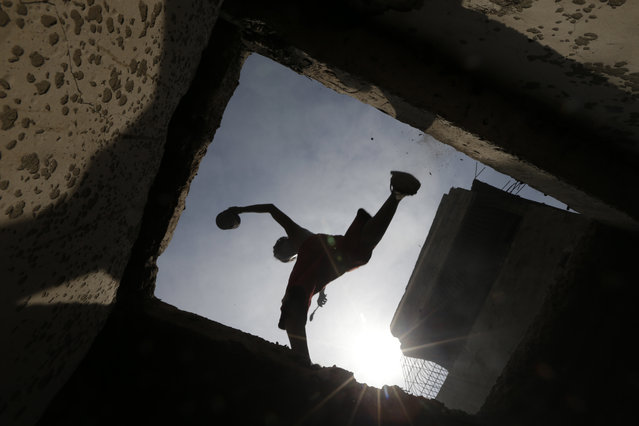 A Filipino jumps on top of burnt homes following an overnight fire that razed a slum area in Caloocan city, east of Manila, Philippines, April 21, 2014. One person died, one more is missing, and thousands of families lost their homes on Easter Sunday after several fire hit residential areas in Metro Manila. Investigators said the result of an initial investigation pointed to electrical short circuit as the cause of the blaze. (Photo by Francis R. Malasig/EPA) 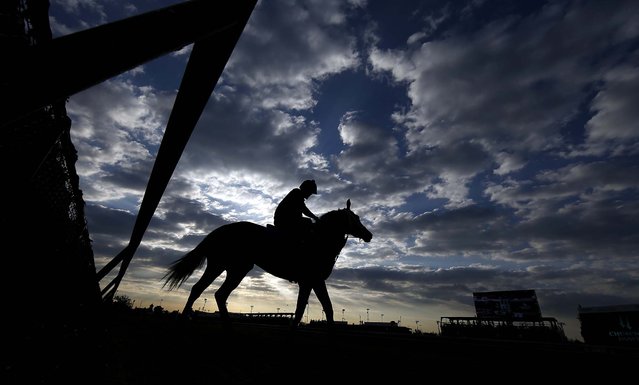 A horse goes for a morning workout at Churchill Downs in Louisville, on May 3, 2014. (Photo by Matt Slocum/Associated Press) 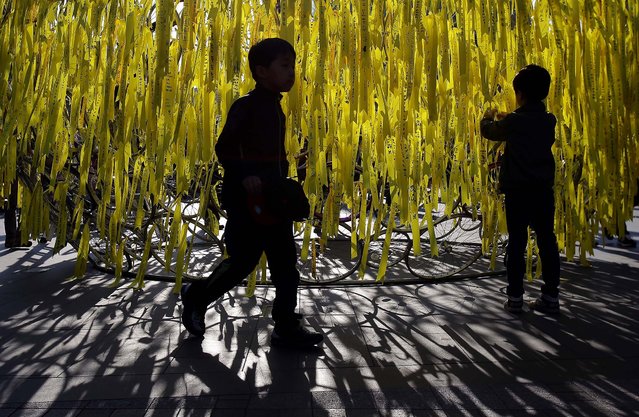 A boy ties a yellow ribbon of hope for the safe return of missing passengers and tribute to the victims of the sunken ferry Sewol, in Seoul, South Korea, on May 3, 2014. On April 16 the Sewol ferry carrying 476 passengers sunk off the island of Jindo. More than 302 passengers are dead or missing and the cause of the accident is still under investigation. (Photo by Chung Sung-Jun/Getty Images) 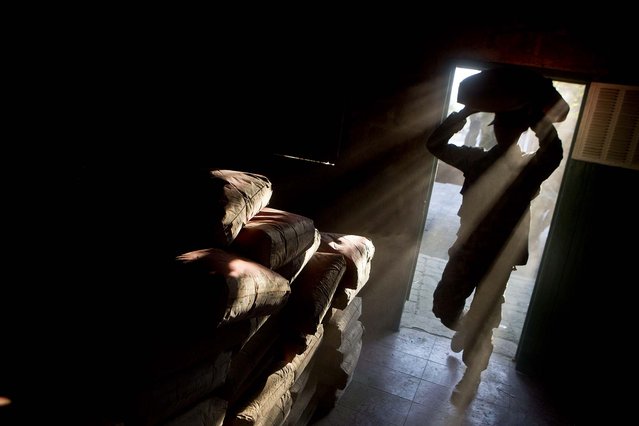 A soldier unloads a bag of cement inside a damaged home in Nagarote, Nicaragua, on April 16, 2014. The government is handing out free cement to residents to make repairs to their homes damaged by last week's 6.2 earthquake. (Photo by Esteban Felix/Associated Press) 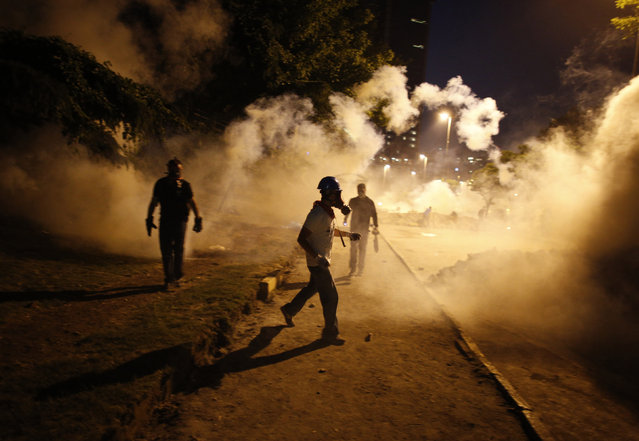 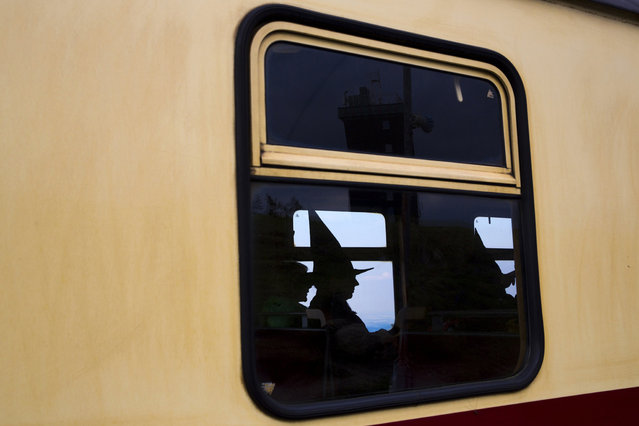 Women dressed up as a witches are silhouetted as they travels on a HSB light railway through the Harz mountains to celebrate the Walpurgisnacht pagan festival, April 30, 2014. Legend has it that on Walpurgisnacht or May Eve, witches fly their broomsticks to meet the devil at the summit of the Brocken Mountain in Harz. In towns and villages scattered throughout the mountain region, locals make bonfires, dress in devil or witches costumes and dance into the new month of May. (Photo by Thomas Peter/Reuters)
Edit Del
04 May 2014 09:22:00, post received 0 comments
Publication archive:
←   →
Popular tags:
All tags
Last searches: