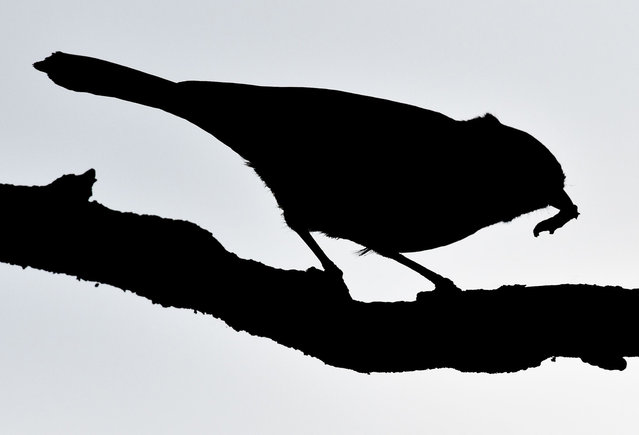 A great tit silhouettes against the sky as it carries a caterpillar in its beak on May 8, 2014 in Petersdorf, eastern Germany. (Photo by Patrick Pleul/AFP Photo/DPA) 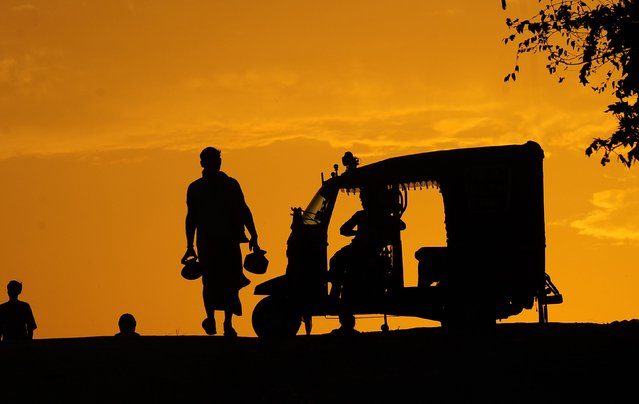 An Indian auto driver waits for passengers at Sangam during a dust storm in Allahabad on May 13, 2014. (Photo by Sanjay Kanojia/AFP Photo) 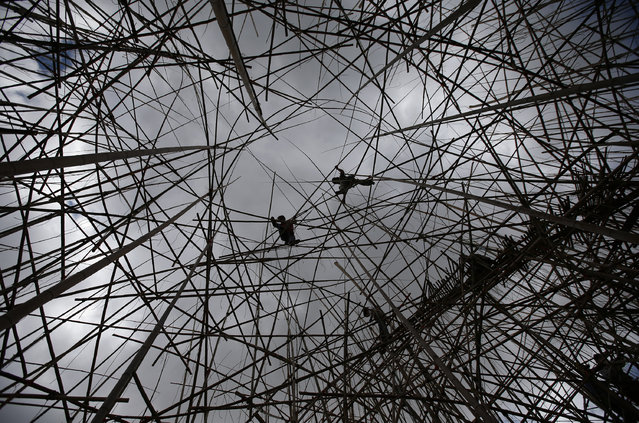 Professional rock climbers work on the art installation “Big Bambu: 5,000 Arms to Hold You” at the Israel Museum in Jerusalem May 12, 2014. The installation by artists Doug and Mike Starn, which upon completion will be made of 10,000 bamboo stalks and cover an area of more than 700 square meters, will open to the public June 10, 2014, a museum spokesperson said on Monday. (Photo by Ronen Zvulun/Reuters) 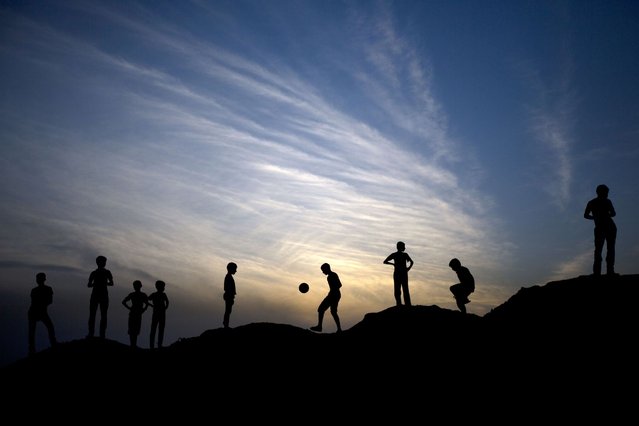 A picture taken on May 4, 2014 at sunset shows Palestinian boys playing football in Beit Lahia in the northern Gaza Strip. (Photo by Mahmud Hams/AFP Photo) 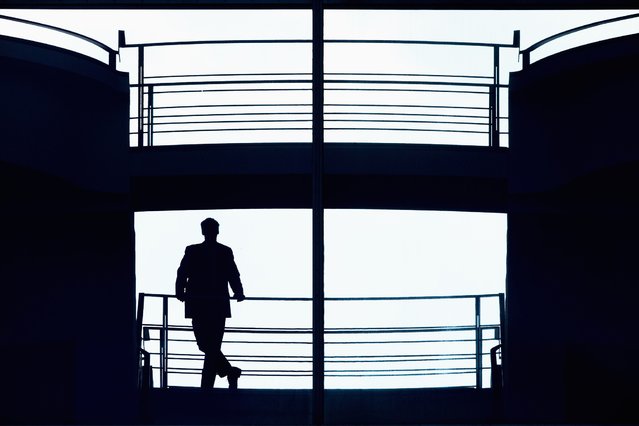 A man is silhouetted as he stands on a walkway in the sky lobby at the Chancellery, the seat of German Chancellor Angela Merkel (not pictured) in Berlin, May 7, 2014. (Photo by Thomas Peter/Reuters) 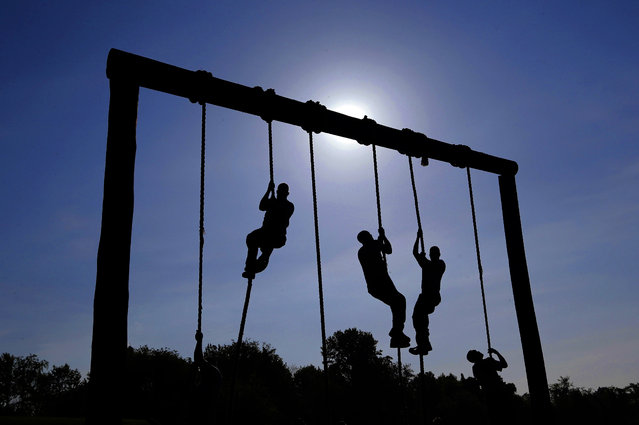 Freshman midshipmen, known as plebes, climb ropes on an obstacle course during Sea Trials, a day of physical and mental challenges that caps off the freshman year at the U.S. Naval Academy in Annapolis, Md., Tuesday, May 13, 2014. (Photo by Patrick Semansky/AP Photo) 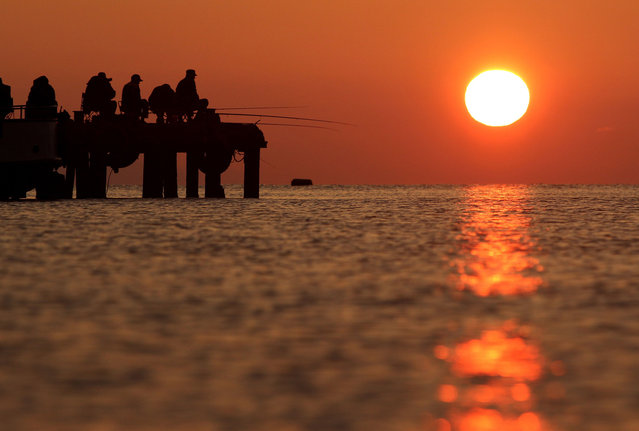 A picture taken late on May 4, 2014, shows people fishing during sunset in the Crimean town of Alushta. (Photo by Yuriy Lashov/AFP Photo) 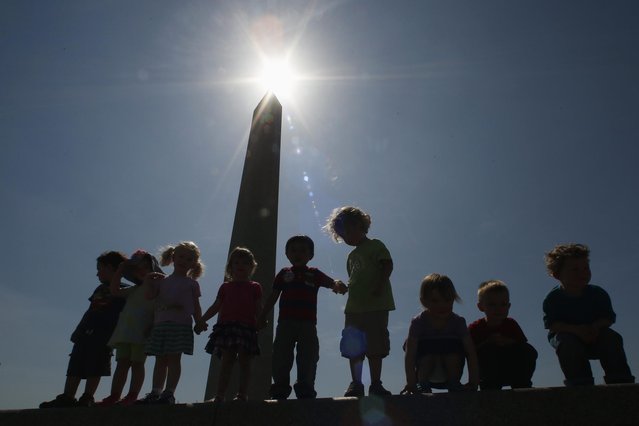 Children play up on a wall during the re-opening ceremony for the Washington Monument in Washington May 12, 2014. The monument was closed in 2011 after it suffered widespread damage caused by a 5.8 magnitude earthquake along the East Coast. (Photo by Kevin Lamarque/Reuters) 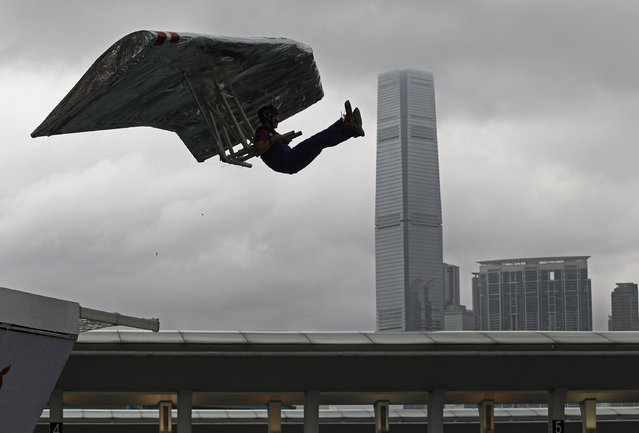 A participant sits in his self-made aircraft flying in front of the International Commerce Centre (ICC) at the Red Bull Flugtag (flight day) competition in Hong Kong, Sunday, May 11, 2014. Participants went into the air with home-made human-powered flying machines. (Photo by Vincent Yu/AP Photo) 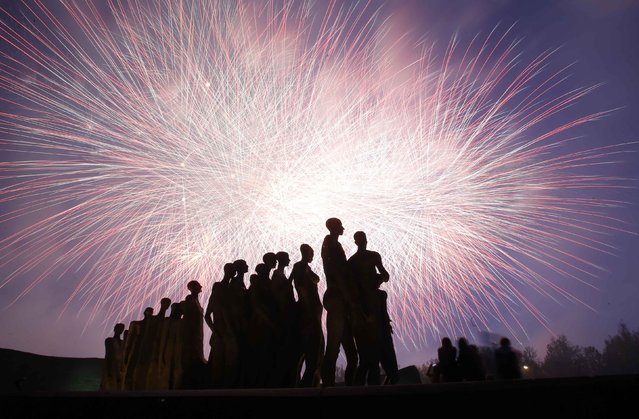 Fireworks explode in the sky above a monument to victims of the holocaust during events to mark Victory day in Moscow May 9, 2014. Russia celebrates the 1945 victory over Nazi Germany every year on May 9. (Photo by Artur Bainozarov/Reuters) 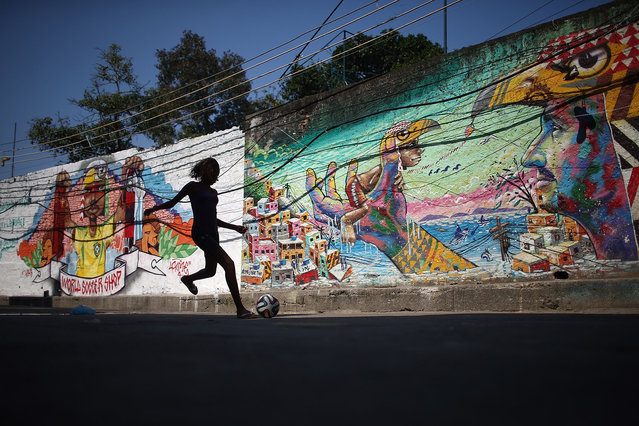 A girl plays soccer in front of graffiti created by acclaimed local graffiti artist Acme in the pacified Pavao-Pavaozinho community, on May 8, 2014 in Rio de Janeiro, Brazil. Protests and shootings broke out following the discovery of dancer Douglas Rafael da Silva Pereira's body in the “favela” last month. Ahead of the World Cup, some of Rio's pacified favelas have seen an increase in violence, including a number of shootings in Pavao-Pavaozinho. Around 10,000 people live in the Cantagalo and Pavao-Pavaozinho communities with a total of around 1.6 million Rio residents residing in shantytowns, many of which are controlled by drug traffickers. (Photo by Mario Tama/Getty Images) 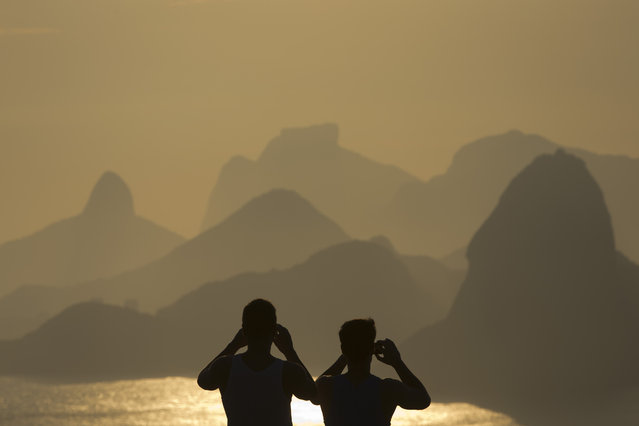 A woman jogs along the East River waterfront as thick fog blankets over the Brooklyn Bridge seen through a bicycle rack, Saturday, May 10, 2014, in New York. (Photo by Julio Cortez/AP Photo) 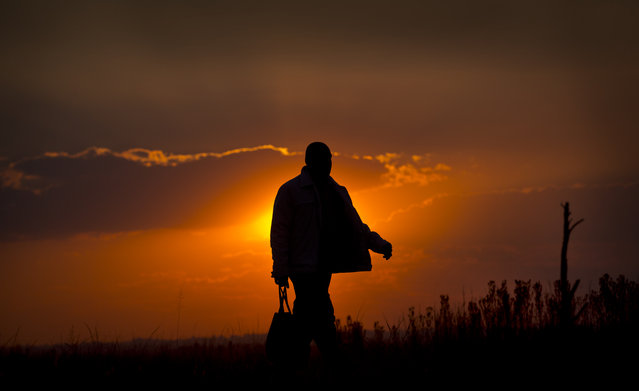 A man walks home at sunset past recently-deployed South African military personnel in the politically-sensitive mining town of Bekkersdal, where there have been recent disputes between supporters of incumbent President Jacob Zuma's African National Congress (ANC) party and supporters of rival Julius Malema's Economic Freedom Fighters (EFF) party, in South Africa Monday, May 5, 2014. Zuma said Monday that he anticipates an election victory this week for the ruling ANC, and that his government, if re-elected, will speed the provision of basic services following protests in many poor communities that complain they are sidelined. (Photo by Ben Curtis/AP Photo) 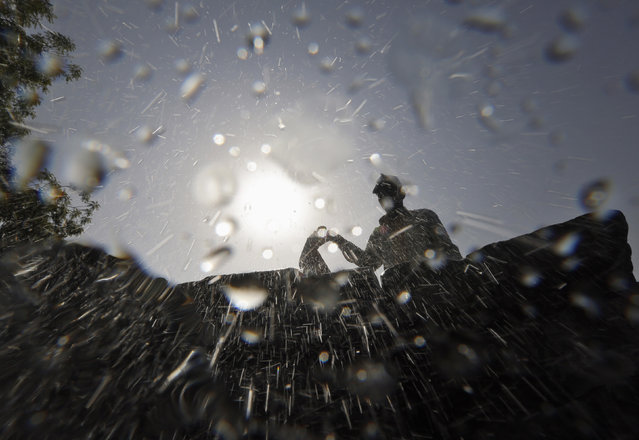 An Indian traditional laundryman known as a “dhobi” is silhouetted as he washes clothes at an open air laundry in the western Indian city of Ahmedabad May 6, 2014. (Photo by Amit Dave/Reuters) 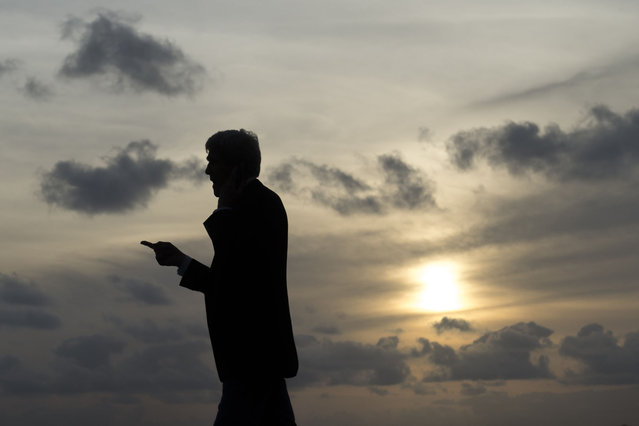 US Secretary of State John Kerry talks on his cellphone, during an airplane refueling stop at Sal Island, Cape Verde, enroute to Washington, DC, Monday, May 5, 2014. (Photo by Saul Loeb/AP Photo) 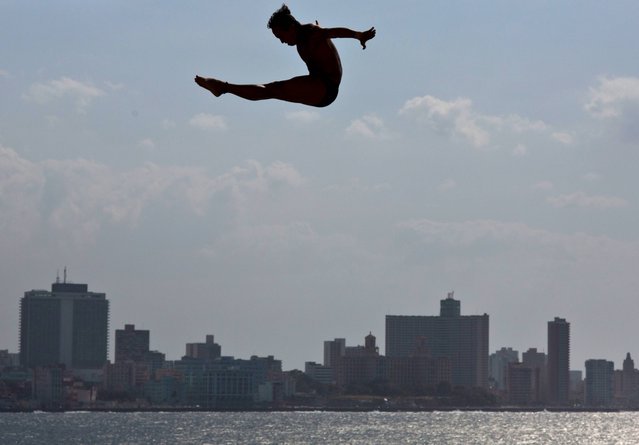 An athlete dives from Red Bull Cliff Diving World Series platform during a training session in Havana, Cuba, Thursday, May 8, 2014. The first competition of the 2014 Red Bull Cliff Diving World Series Championship will be on Saturday May 10, when the world's best cliff divers will jump from the 27-metre platform positioned on the historic Morro Castle in Havana. (Photo by Ramon Espinosa/AP Photo) 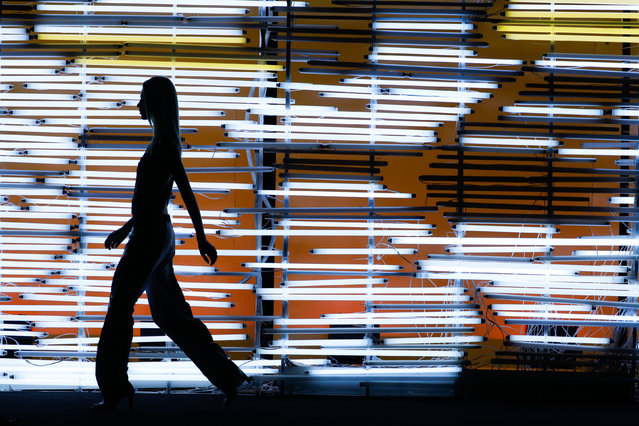 A model wears a creation from the Espaco Fashion summer collection during Fashion Rio in Rio de Janeiro, Brazil, Friday, May 25, 2012. (Photo by Felipe Dana/AP Photo) 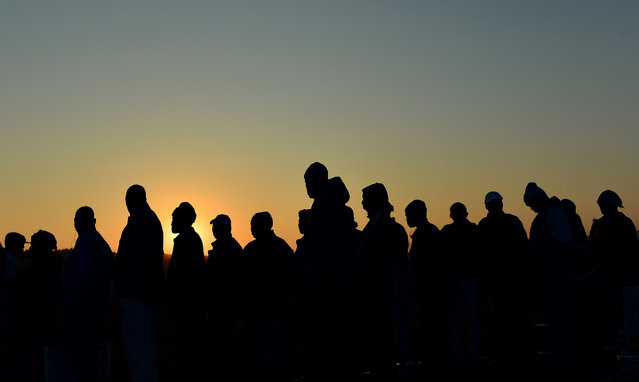 South Africans stand in line to cast their vote at a polling station in Pretoria, South Africa, early May 7, 2014. South Africans started voting in general elections expected to keep the ruling African National Congress in power, even if polls said it could lose votes over corruption and enduring poverty. About 25 million people were eligible to vote in the elections. (Photo by EPA) 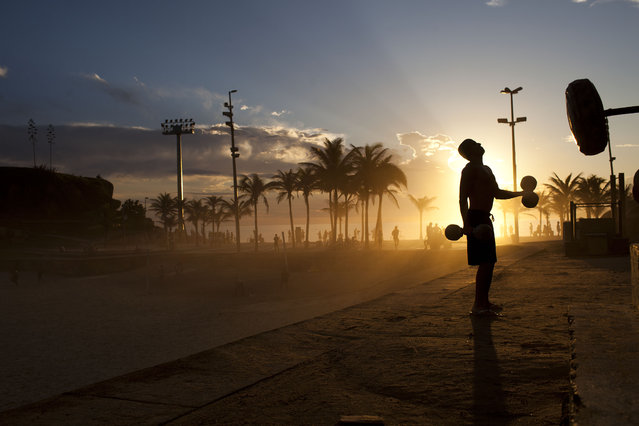 A man works out at sunset at the Arpoador beach in Rio de Janeiro, Brazil, Friday, December 16, 2011. (Photo by Felipe Dana/AP Photo) 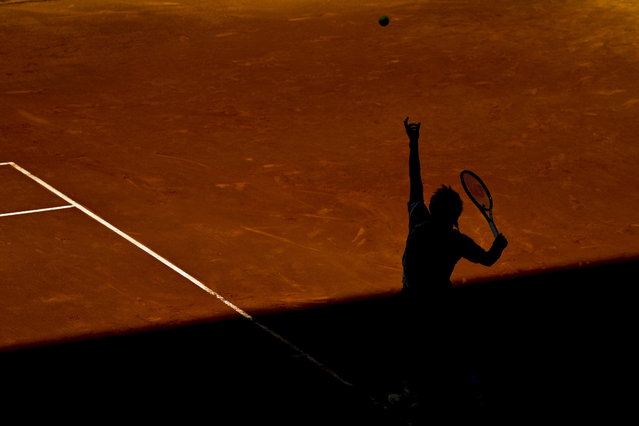 Japanese tennis player Kei Nishikori's shadow is silhouetted on the court as he serves the ball against Croatian Ivan Dodig during their men's singles first round tennis match of the Mutua Madrid Open played at Caja Magica complex in Madrid, Spain, on May 5, 2014. (Photo by Emilio Naranjo/EPA) 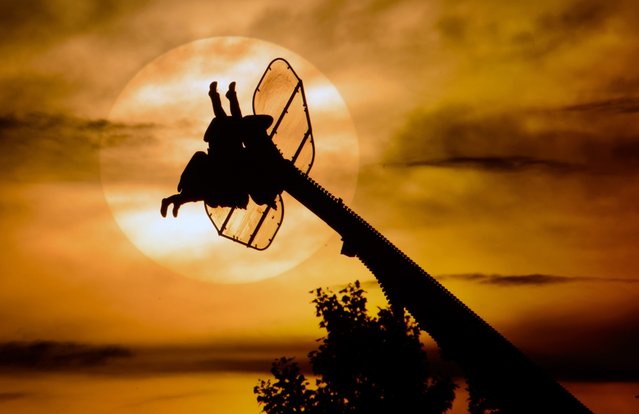 A fairground ride is silhouetted against the setting sun at the Spring Festival in Hanover, Germany, 05 May 2014. (Photo by Julian Stratenschulte/EPA) 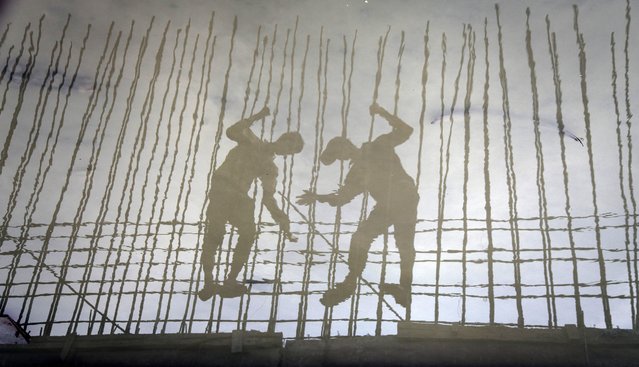 A picture rotated 180 degree shows the reflection in water as Indian labourers work at a drainage system in Mumbai, India, 07 May 2014. According to Organisation for Economic Cooperation and Development's (OECD) latest economic outlook report, India's economic growth is poised to inch up 4.9 per cent in 2014 and India's GDP is expected to pick up further momentum and grow 5.9 per cent in 2015. (Photo by Divyakant Solanki/EPA) 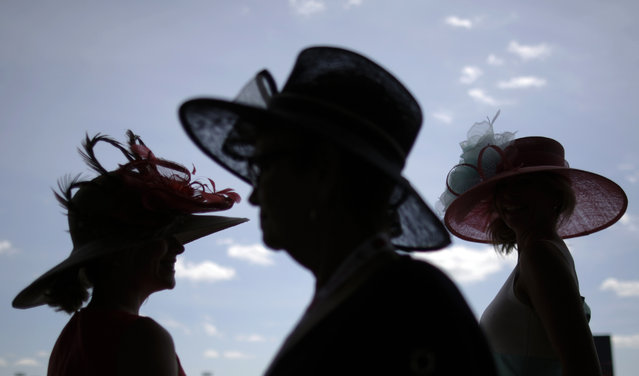 Women make their way to the grandstand before the 140th running of the Kentucky Derby horse race at Churchill Downs Saturday, May 3, 2014, in Louisville, Ky. (Photo by David Goldman/AP Photo) 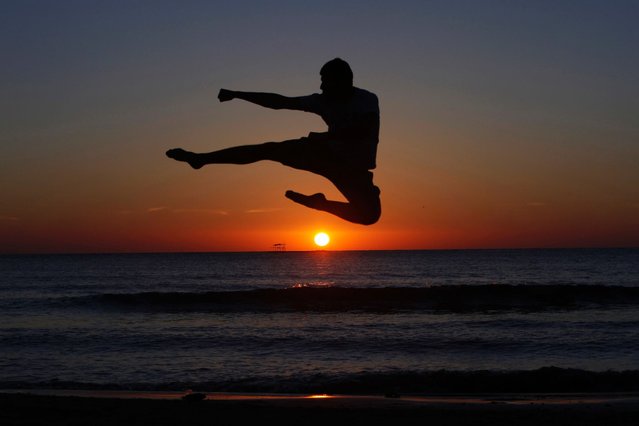 A youth exercises on a beach during sunset in Tripoli. (Photo by Ismail Zitouny/Reuters) 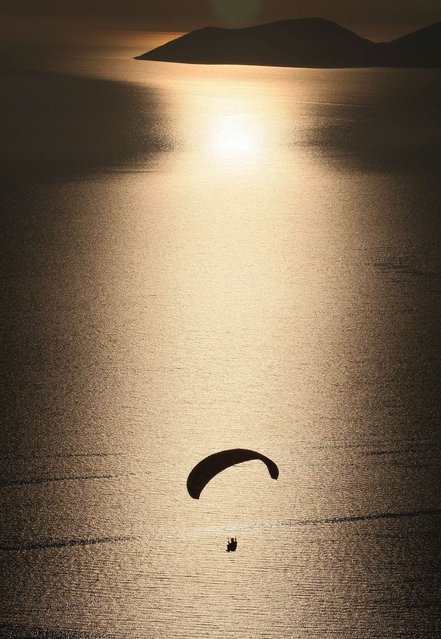 A paraglider flies over the sea close to the Albanian coastal town of Vlora on May 7, 2014, as part of the Paragliding Albania Open 2014. (Photo by Gent Shkullaku/AFP Photo)
Edit Del
15 May 2014 07:21:00, post received 0 comments
Publication archive:
←   →
Popular tags:
All tags
Last searches: