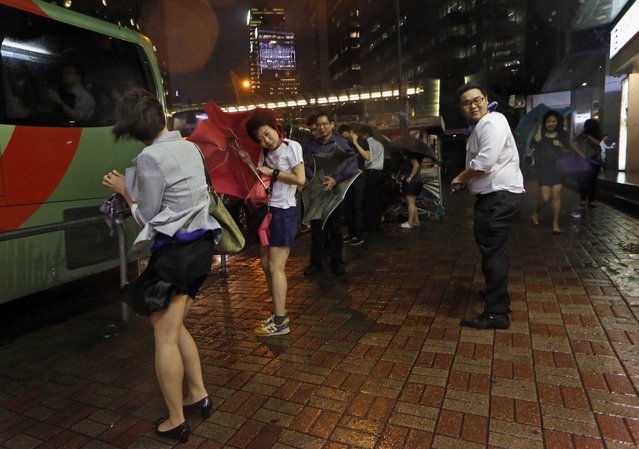 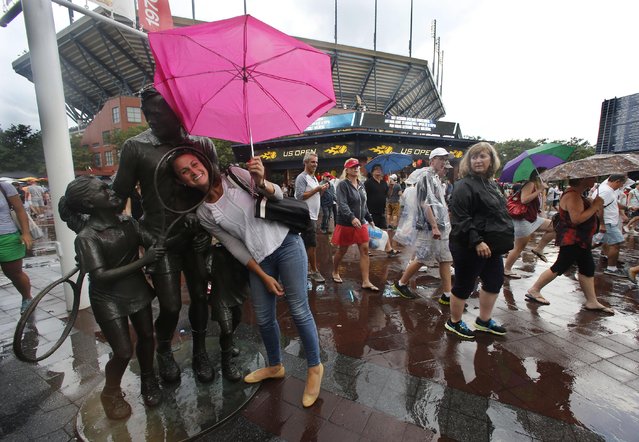 A tennis fan stops for a photo as she exits the Billie Jean King National Tennis Center during a rain delay at the 2014 U.S. Open tennis tournament, Sunday, August 31, 2014, in New York. (Photo by Elise Amendola/AP Photo) 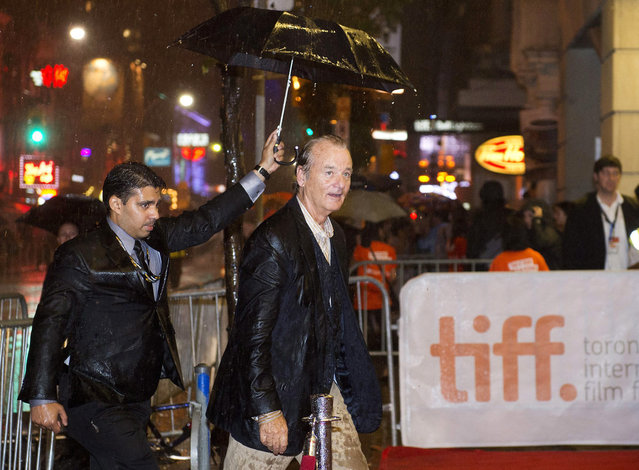 Actor Bill Murray is soaked by a down pour of rain after he signed autographs for fans at the premiere of his film, “St. Vincent” during the 2014 Toronto International Film Festival in Toronto on Friday, September 5, 2014. The Toronto Film Festival turned its second day into a very welcome new holiday: “Bill Murray Day”, where three of Murray's classics, “Stripes”, “'Groundhog Day” and “Ghostbusters”, were screened ahead of the premiere of Murray's latest, “St. Vincent”. (Photo by Nathan Denette/AP Photo/The Canadian Press) 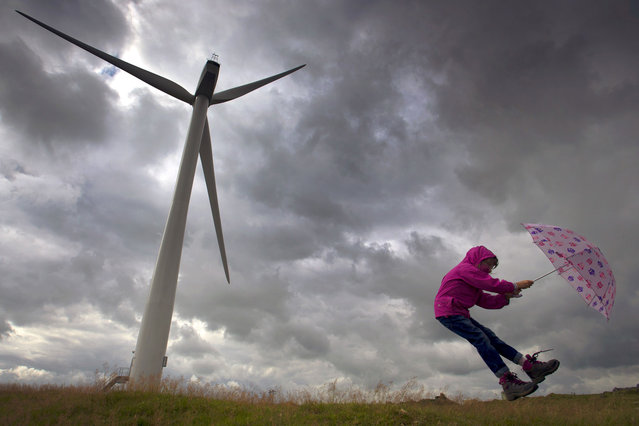 As stormy weather continues to lash the country, Suzanne Roberts, 6, plays with an umbrella as a gale blows by a wind turbine at Brassington near Ashbourne in the Derbyshire Peak District. (Photo by F Stop Press/Visual Press Agency) 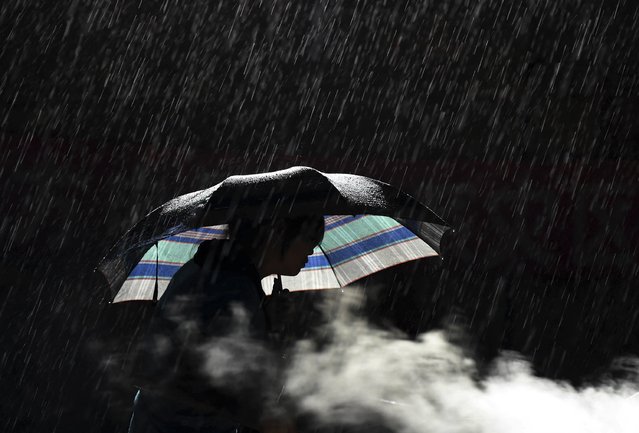 A woman holds an umbrella as she cooks in the rain at the earthquake zone of Longtoushan town, Ludian county, Zhaotong, Yunnan province, August 7, 2014. The earthquake in China on the weekend triggered landslides that have blocked rivers and created rapidly growing bodies of water that could unleash more destruction on survivors of the disaster that killed 615 people, state media reported. (Photo by Reuters/China Daily) 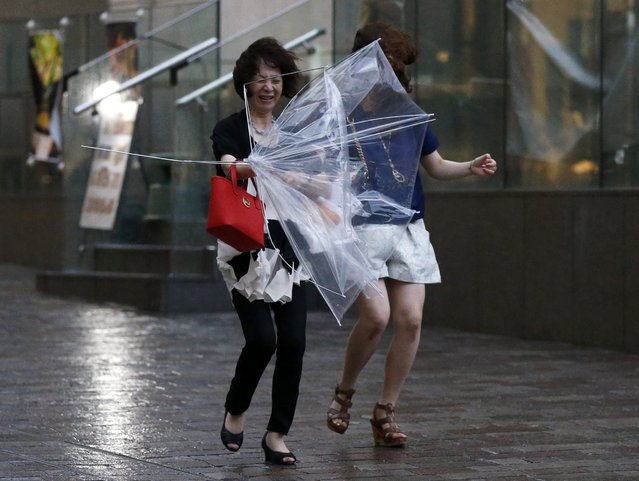 Women struggle with strong winds and rain caused by Typhoon Halong in Tokyo August 10, 2014. Typhoon Halong killed one person in Japan on Sunday and injured 33, media said, as authorities ordered 1.6 million people out of the path of the storm that battered the west of the country with heavy rain and wind. (Photo by Toru Hanai/Reuters) 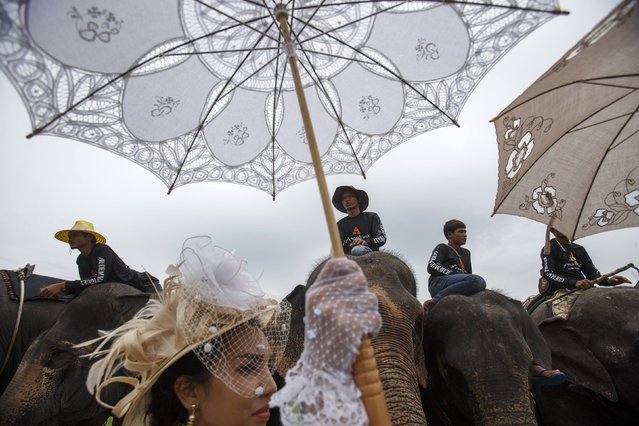 A woman holds a parasol as she stands next to elephants during a match at the 2014 King's Cup Elephant Polo Tournament in Samut Prakan province, on the outskirts of Bangkok August 30, 2014. (Photo by Athit Perawongmetha/Reuters) 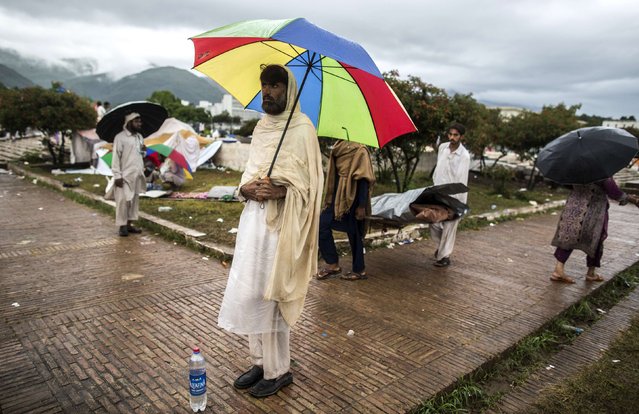 An anti-government protester stands as fellow protesters carry their belongings in the premises of the President and Parliament Houses during the Revolution March in Islamabad September 5, 2014. (Photo by Zohra Bensemra/Reuters) 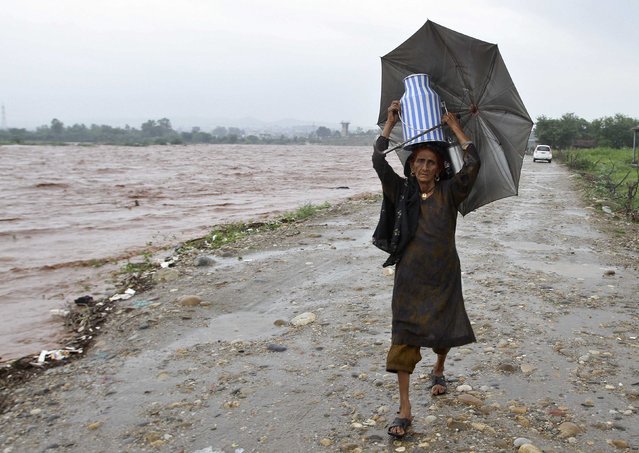 A nomadic woman carries a milk container while shifting her belongings to a safer place from the flooded banks of river Tawi after heavy rains in Jammu September 5, 2014. Sixty-five people were killed after heavy rains caused flash floods in Indian-administered Kashmir, including a wedding party on a bus that was swept away, officials said. (Photo by Mukesh Gupta/Reuters) 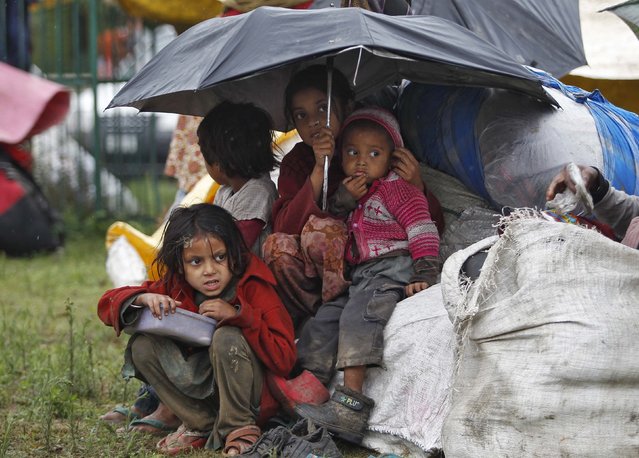 Kashmiri children with their belongings sit under an umbrella during rain in Srinagar September 6, 2014. Authorities declared a disaster alert in the northern region after heavy rain hit villages across the Kashmir valley, causing the worst flooding in two decades. (Photo by Danish Ismail/Reuters) 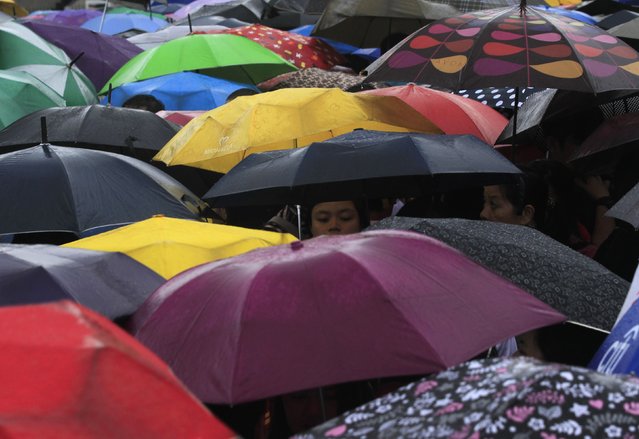 Participants for “Walk for Peace” use umbrellas in the rain brought on by Typhoon Kalmaegi, also called Luis, at Luneta park in Manila September 14, 2014. Tropical Storm Kalmaegi intensified into a typhoon on Saturday, and continues to build moving farther towards the northern provinces, the state weather bureau reported. (Photo by Romeo Ranoco/Reuters) 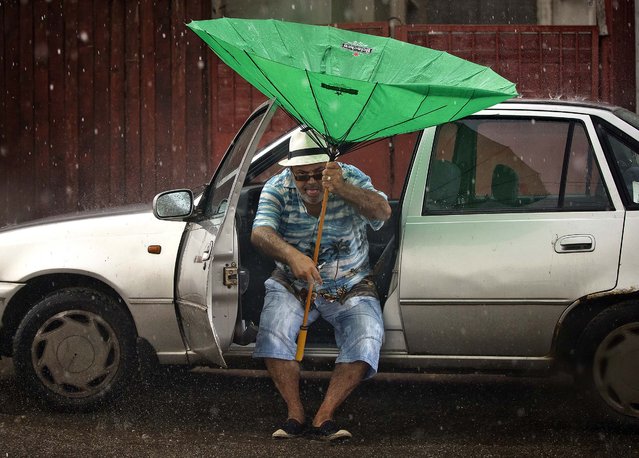 A man uses a damaged umbrella while boarding a car during a thunderstorm in Bucharest, Romania, on August 8, 2014. (Photo by Vadim Ghirda/Associated Press) 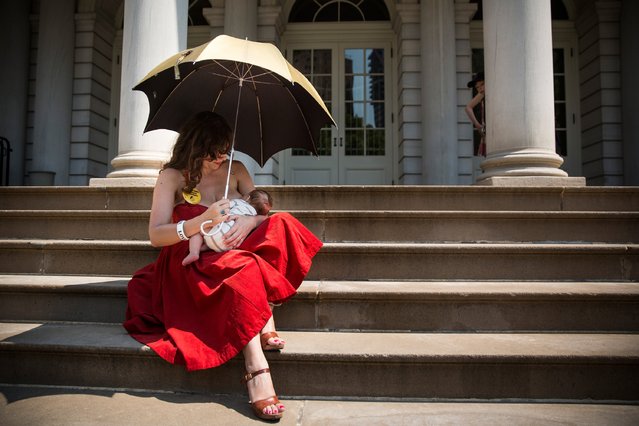 Kiki Valentine breastfeeds her 9-week-old son, Hart Valentine, on the steps of City Hall during a ralley to support breastfeeding in public on August 8, 2014 in New York City. The event was organized by the New York City Breastfeeding Leadership Council, which advocates for the social acceptance of allowing women to breastfeed in public. (Photo by Andrew Burton/Getty Images) 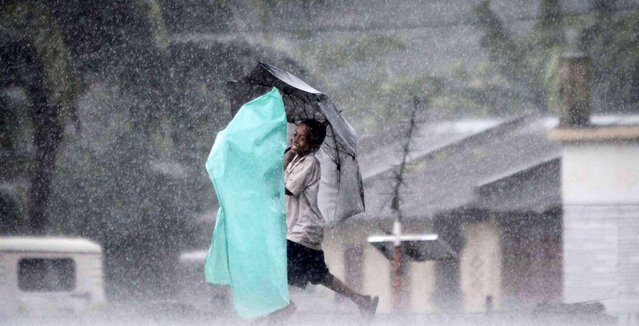 A village boy holds an umbrella and walks in the rain with another, wrapped in a plastic sheet, on the outskirts of Bhubaneswar, India, Wednesday, September 10, 2014. (Photo by Biswaranjan Rout/AP Photo) 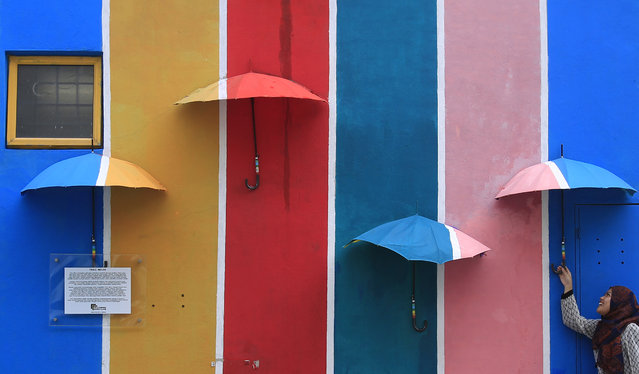 A Muslim woman poses for a souvenir picture in front of a mural in Shah Alam, outside Kuala Lumpur, Malaysia, Wednesday, August 13, 2014. (Photo by Lai Seng Sin/AP Photo) 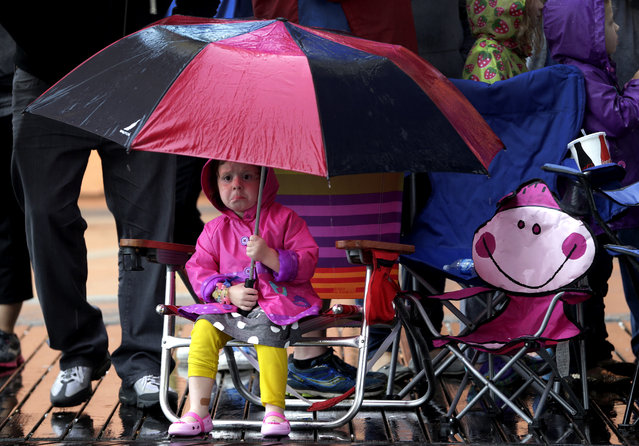