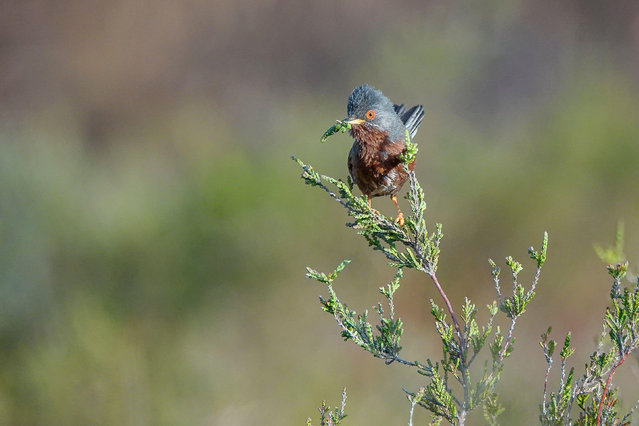 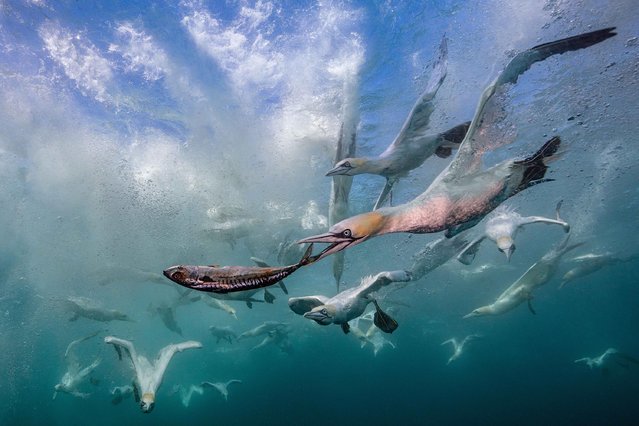 Hundreds of gannets dive for mackerel off the coast of Shetland, Northern Isles of Scotland on July 2020, where they plunge into the water from heights of up to 100ft at speeds of 60mph. (Photo by David Keep/The Times) 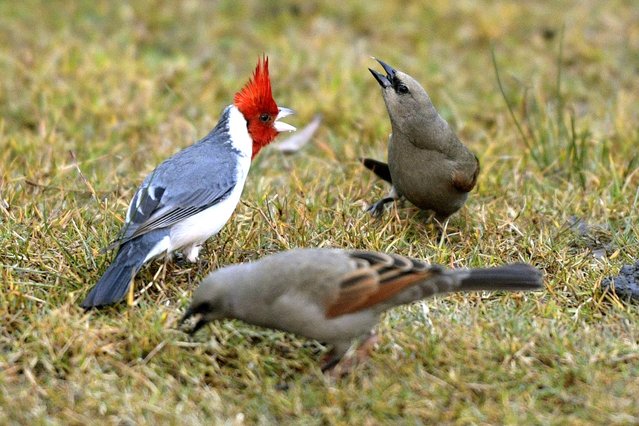 A red-crested cardinal (Paroaria coronata) (L) and two grayish baywings (Agelaioides badius) are seen by the “Lago del Rosedal” in Buenos Aires, on July 20, 2020 during the COVID-19 novel coronavirus pandemic. Argentina began a gradual flexibilization within the pandemic lockdown by reopening activities in a phased scheme until August 3, including a limited number of industrial, commercial, service and recreational activities. (Photo by Juan Mabromata/AFP Photo) 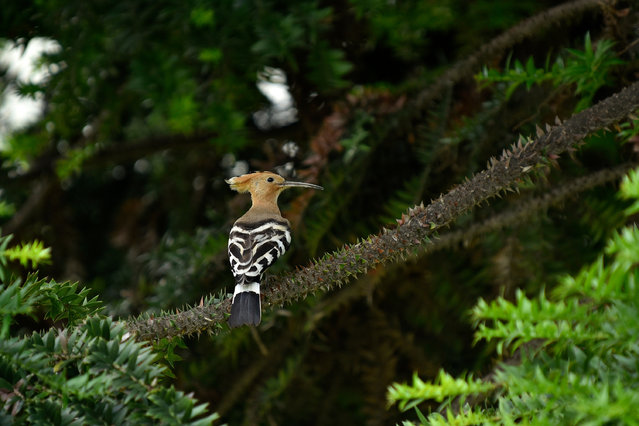 Hoopoe seen in the tree during partial ongoing nationwide lockdown as concerns about the spread of Corona Virus (COVID-19) at Kathmandu, Nepal on Wednesday, July 01, 2020. (Photo by Narayan Maharjan/NurPhoto via Getty Images) 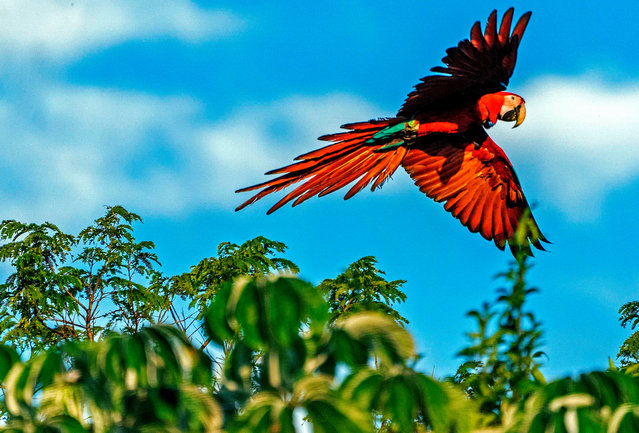 Handout picture released by the Rewilding Argentina Foundation showing a red macaw of five that were freed at the Ibera National Park, near Ituzaingo, Corrientes province, Argentina, on June 28, 2020, as part of a project to recover native species. The red macaw has been extinct in the province for the last 100 years. (Photo by Rewilding Argentina/AFP Photo) 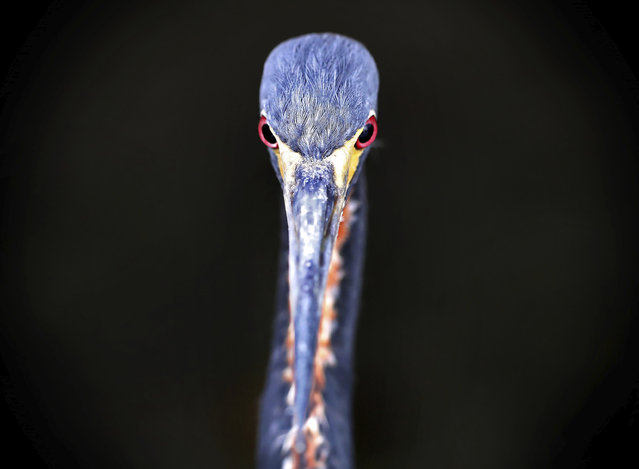 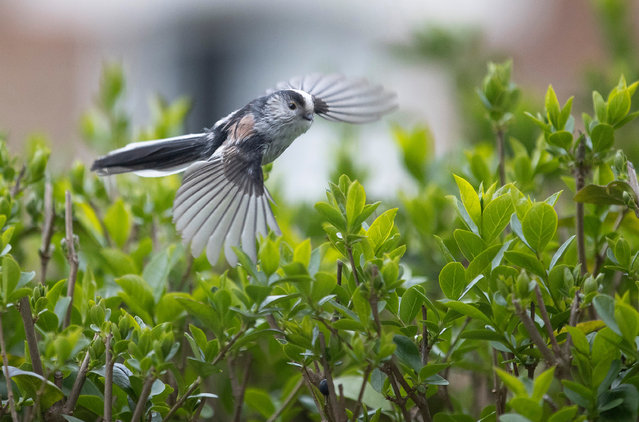 An adult long-tailed tit flies from the privet hedge at the front of Guardian sports photographer Tom Jenkins’ house back to its nest during the Covid-19 lockdown in north London. (Photo by Tom Jenkins/The Guardian) 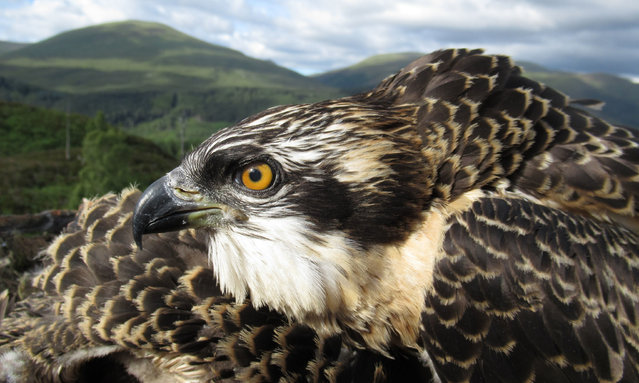 Osprey chicks that hatched at Loch Arkaig pine forest in the Highlands about five weeks ago achieve fame on a live-stream nest camera during lockdown in Highlands, Scotland on June 6, 2020. The chicks, which are barely five weeks old, have been watched by over 250,000 viewers around the world. (Photo by Lewis Pate/WTML/PA Wire Press Association) 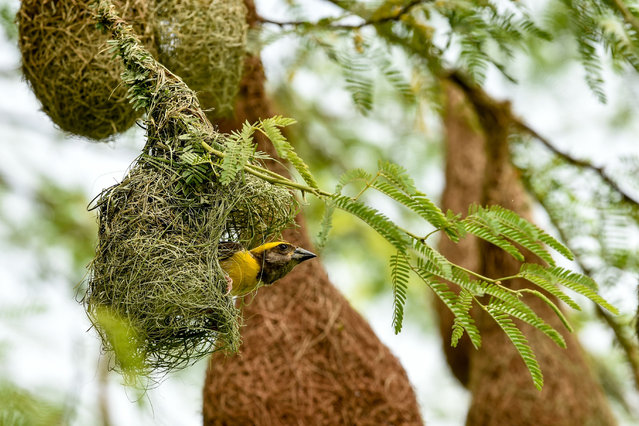 A weaver bird rests in a nest on a tree on the outskirts of Ahmedabad, India on July 24, 2020. (Photo by Sam Panthaky/AFP Photo) 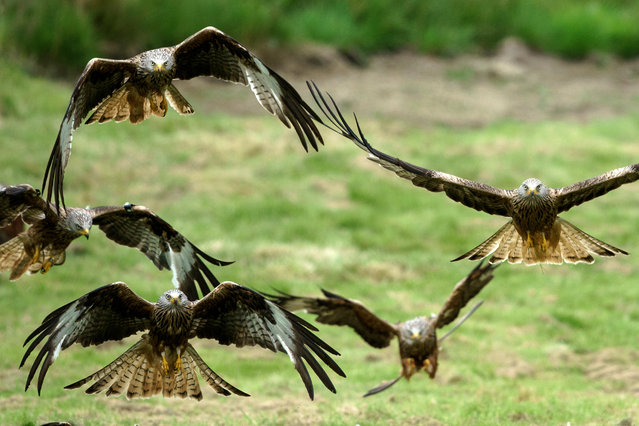 Red kites descend on Gigrin Farm Red Kite Feeding Centre on July 15, 2020 in Rhayder, United Kingdom. As the pandemic lockdown eases in Wales, the famous Gigrin Farm Red Kite Feeding Centre, is ready to open again on 18 July after implementing social distancing measures in the hides and visitor centre. Visitors are now able to book online to see the birds at the Powys farm which is endorsed by the Royal Society for the Protection of Birds. Wild red kites are fed everyday of the year by farmer Chris Powell and has continued throughout the COVID-19 lockdown.. In the 1970's the population of the bird of prey dropped to only 30 but a sustained conservation project by Chris Powell and his team has been a massive success with up to 500 red kites visiting each afternoon creating an aerobatic spectacle as the birds swoop for morsels of beef. (Photo by Christopher Furlong/Getty Images) 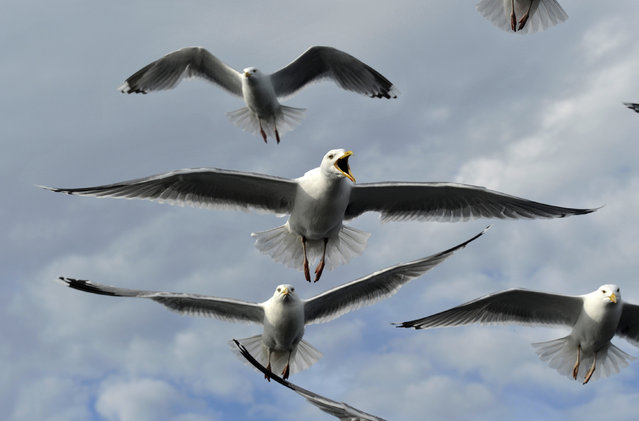 Seagulls flying over the Barents Sea in Murmansk Region, Russia on May 27, 2020. (Photo by Lev Fedoseyev/TASS) 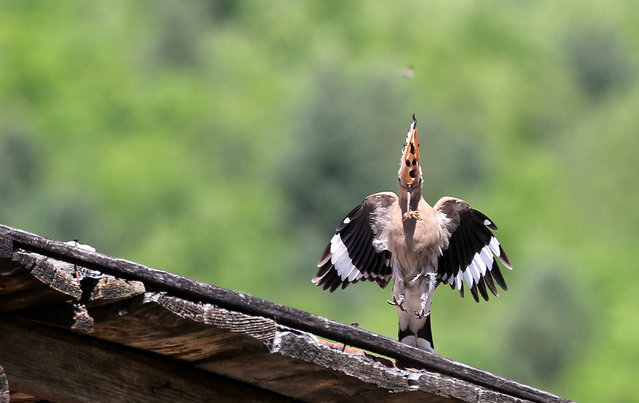 A hoopoe in Heilongjiang, China. Locally the bird is considered a symbol peace and happiness. (Photo by Costfoto/Barcroft Images) 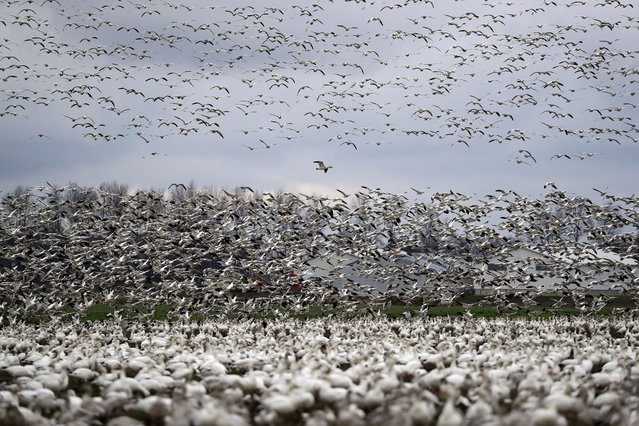 Thousands of snow geese maneuver to land in a farm field at their winter grounds already crowded with other geese Friday, December 13, 2019, in the Skagit Valley near Conway, Wash. More than 50,000 of the birds flock annually to the valley, after migrating from the Arctic tundra. The birds are up to 33 inches tall with a wingspan of over four feet. (Photo by Elaine Thompson/AP Photo) 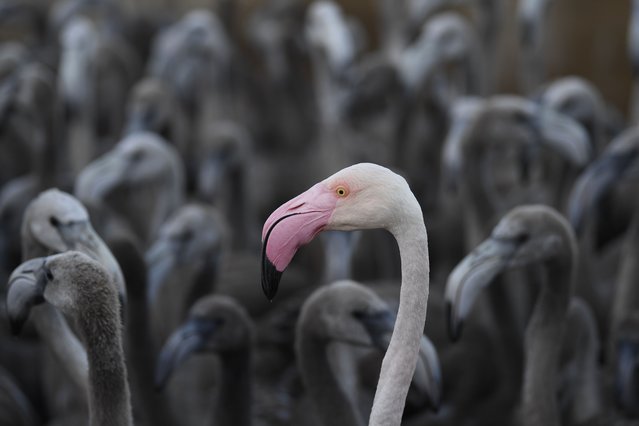 A pink flamingo stands with flamingos chicks in a pen in Aigues-Mortes, near Montpellier, southern France, on August 5, 2020, during a tagging and controling operation of flamingo chicks to monitor the evolution of the species. (Photo by Christophe Simon/AFP Photo) 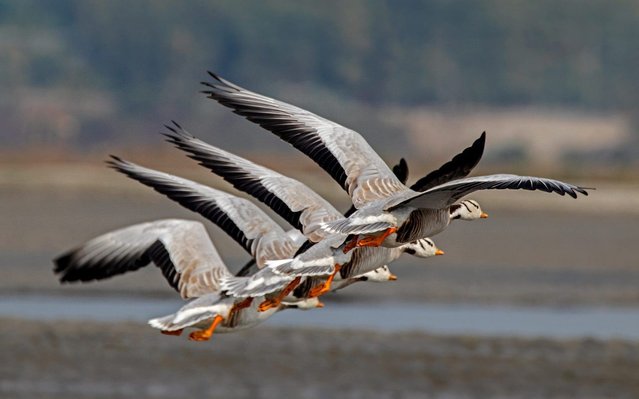 Four geese fly in an remarkably close formation, creating the illusion that they are a giant 8 winged creature. The bar head geese were flying around a wetland in search of food. The unusual image was captured by Joydeep Mazumder, 30, near Gajoldoba, India. (Photo by Joydeep Mazumder/Solent News)
Edit Del
09 Aug 2020 00:03:00, post received 0 comments
Publication archive:
←   →
Popular tags:
All tags
Last searches: