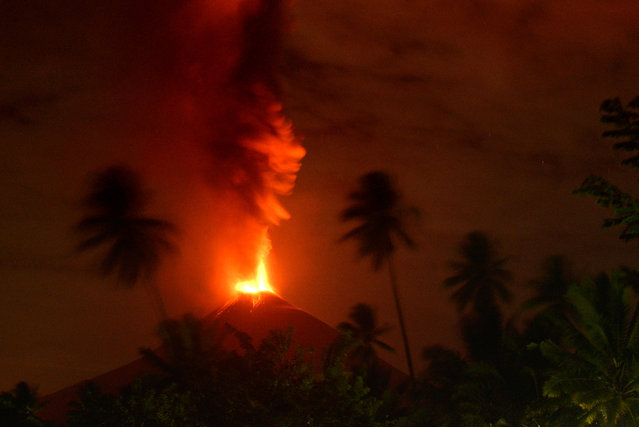 Mount Soputan volcano erupts during the night, as seen from Lobu village in Southeast Minahasa regency, North Sulawesi, Indonesia, October 3, 2018 in this photo taken by Antara Foto. (Photo by Adwit B. Pramono/Reuters/Antara Foto) 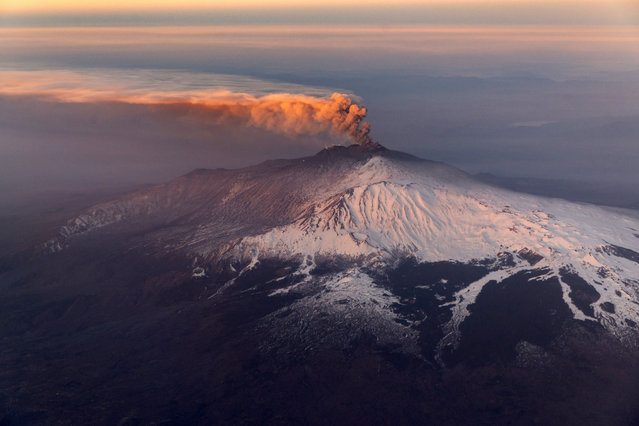 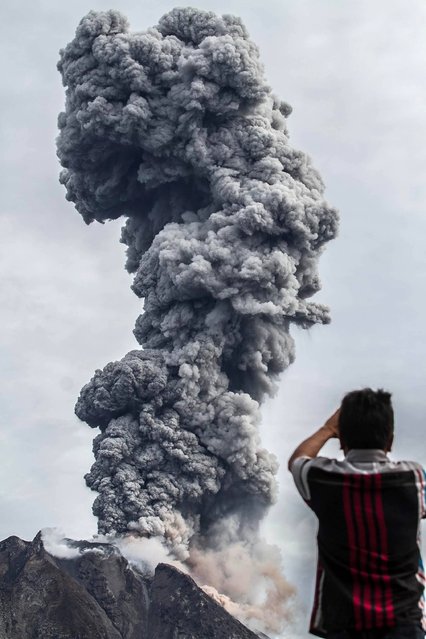 A villager takes a photograph as Mount Sinabung volcano spews thick volcanic ash, as seen from Beganding village in Karo, North Sumatra province, on May 19, 2017. Sinabung roared back to life in 2010 for the first time in 400 years. After another period of inactivity, it erupted once more in 2013 and has remained highly active since. (Photo by Ivan Damanik/AFP Photo) 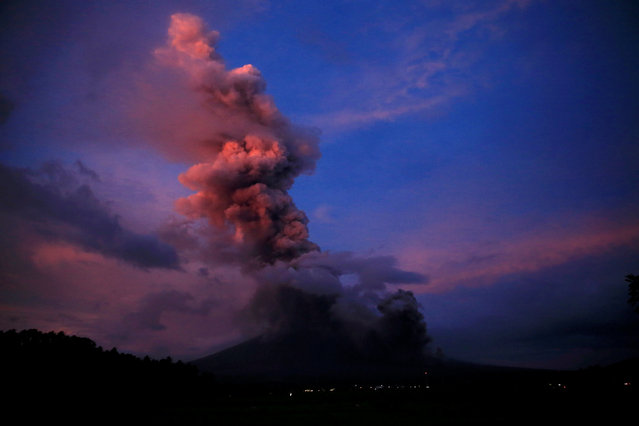 A view of the Mayon Volcano after a new eruption in Camalig, Albay province, south of Manila, Philippines January 24, 2018. (Photo by Romeo Ranoco/Reuters) 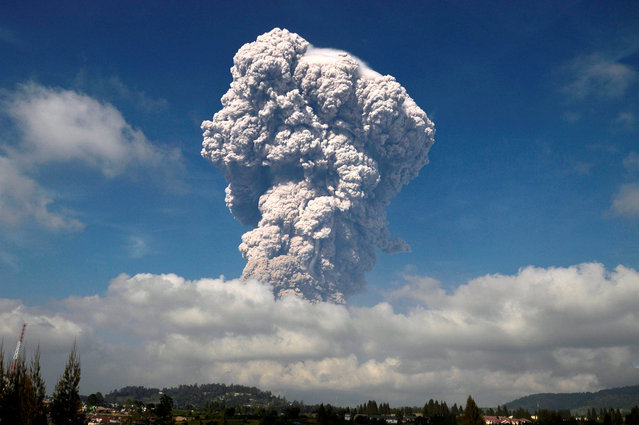 Ash from Mount Sinabung volcano rises to an approximate height of 5,000 meters during an eruption in Karo, North Sumatra, Indonesia February 19, 2018 in this photo taken by Antara Foto. (Photo by Maz Yons/Reuters/Antara Foto) 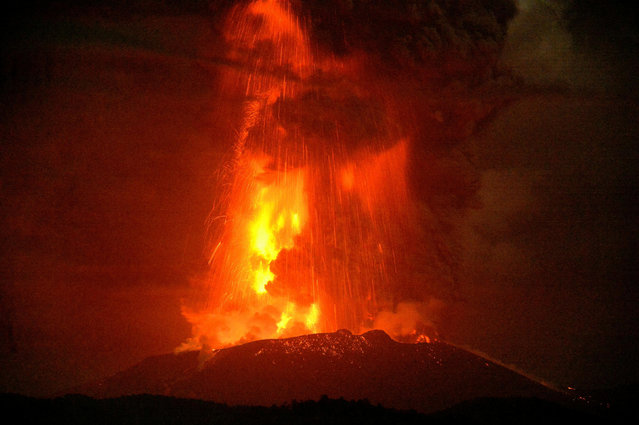 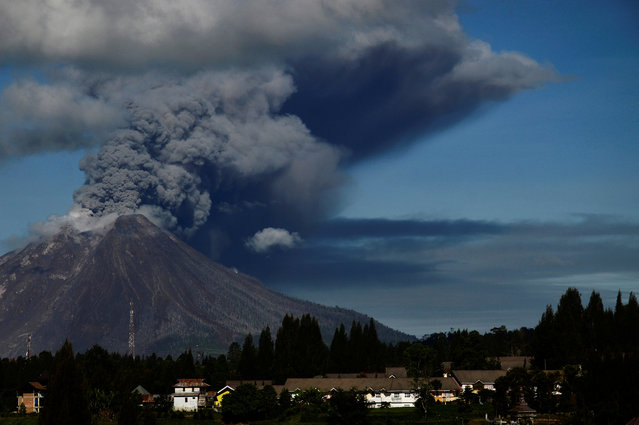 Mount Sinabung volcano spews volcanic ash into the air during an eruption in Karo, North Sumatra, Indonesia April 15, 2018 in this photo taken by Antara Foto. (Photo by Maz Yons/Reuters/Antara Foto) 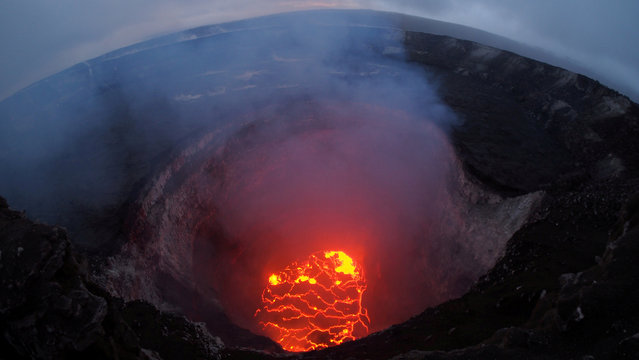 Kilauea volcano's summit lava lake shows a significant drop of roughly 220 metres below the crater rim in this wide angle camera view showing the entire north portion of the Overlook crater in Hawaii, U.S. May 6, 2018. (Photo by Reuters/USGS) 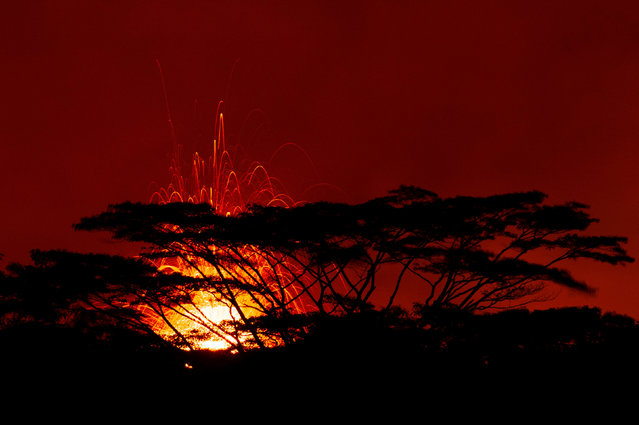 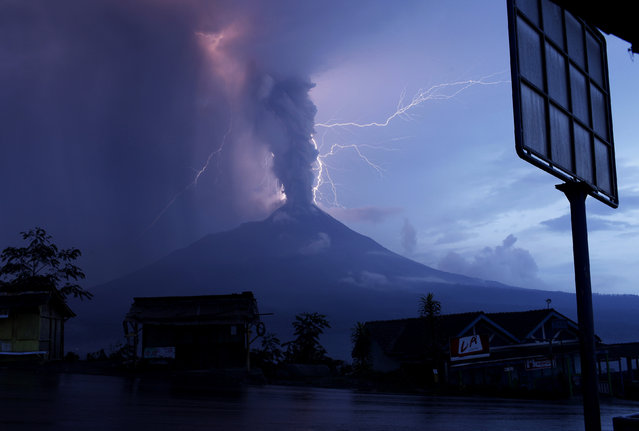 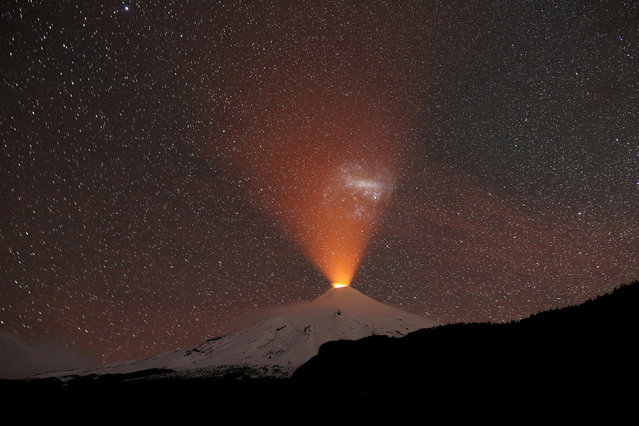 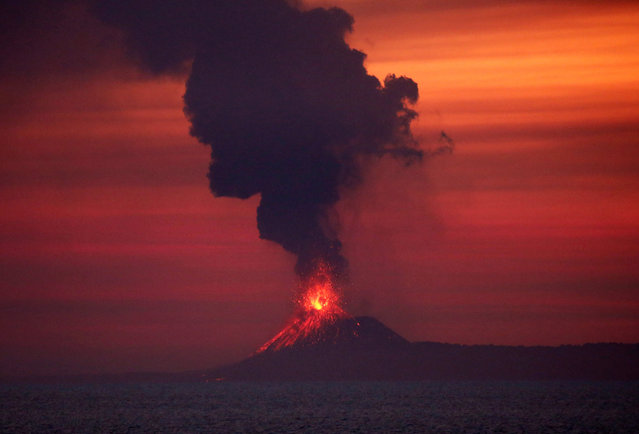 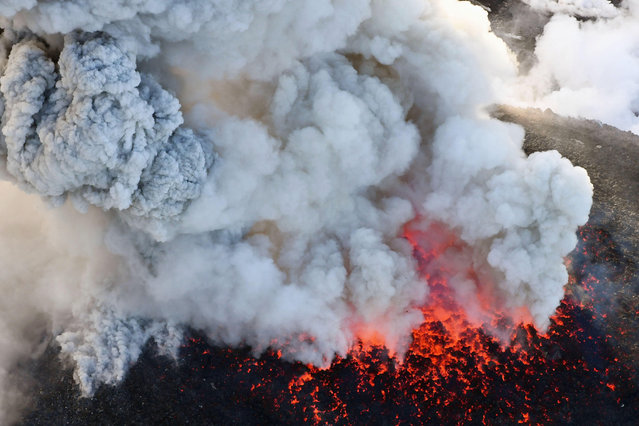 A column of volcanic smoke rises from the crater on the Shinmoedake volcano after its eruption in Kirishima, southern Japan, Tuesday, March 6, 2018. The volcano erupted violently several times Tuesday, shooting up ash and smoke up to 2,300 meters (7,500 feet) in its biggest explosion since 2011, the Meteorological Agency said. (Photo by Kyodo News via AP Photo) 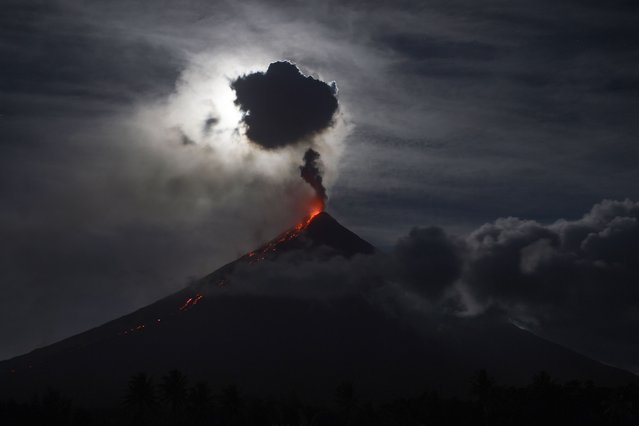 The “super blue blood moon” obscured by clouds illuminates Mayon volcano as it spews ash near Legazpi City, Albay province, early on February 1, 2018. Skywatchers were hoping for a rare lunar eclipse that combines three unusual events – a blue moon, a super moon and a total eclipse, which was to make for a large crimson moonviewable in many corners of the globe. (Photo by Ted Aljibe/AFP Photo) 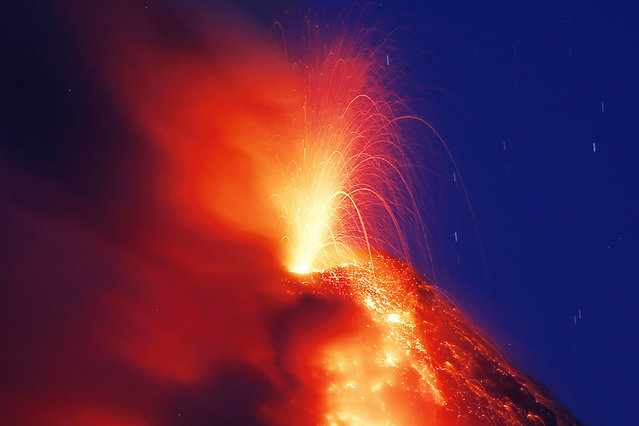 Mayon volcano erupts for the second straight day as lava cascades down its slopes Tuesday, January 23, 2018 as seen from Legazpi city, Albay province, around 340 kilometers (200 miles) southeast of Manila, Philippines. The Philippines' most active volcano ejected a huge column of lava fragments, ash and smoke in another thunderous explosion at dawn Tuesday, sending thousands of villagers back to evacuation centers and prompting a warning that a violent eruption may be imminent. (Photo by Bullit Marquez/AP Photo) 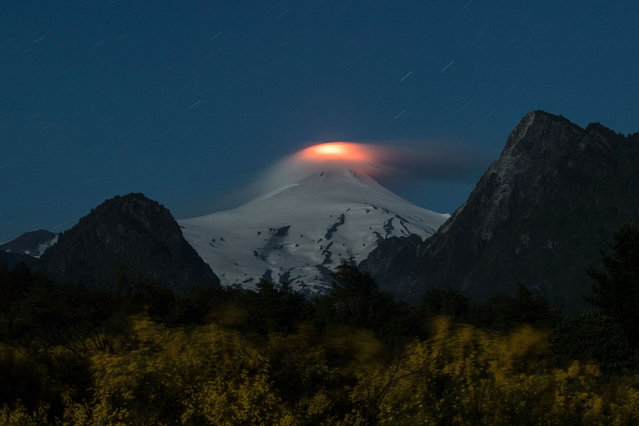 View of the Villarrica volcano taken from Pucon, some 800 kilometres south of Santiago, showing signs of activity on December 06, 2017. (Photo by Christian Miranda/AFP Photo) 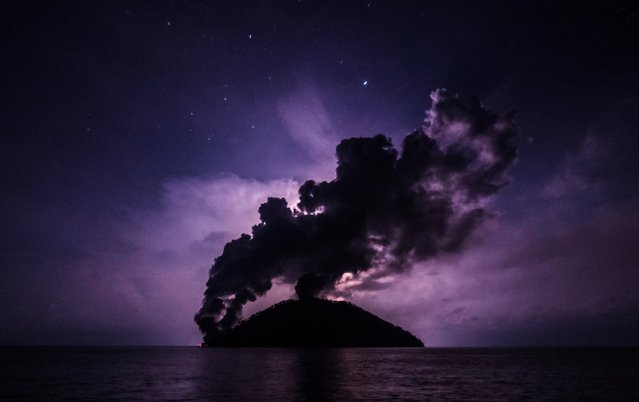 In this file photo taken on Tuesday, January 16, 2018, ash plumes rise from the volcano on Kadovar Island, Papua New Guinea in the South Pacific. Seismic activity beneath a Papua New Guinea volcano could mean a major eruption is imminent. Thousands of people have been evacuated from islands surrounding Kadovar Island, where a volcano has been erupting since Jan. 5. (Photo by Brenton-James Glover via AP Photo) 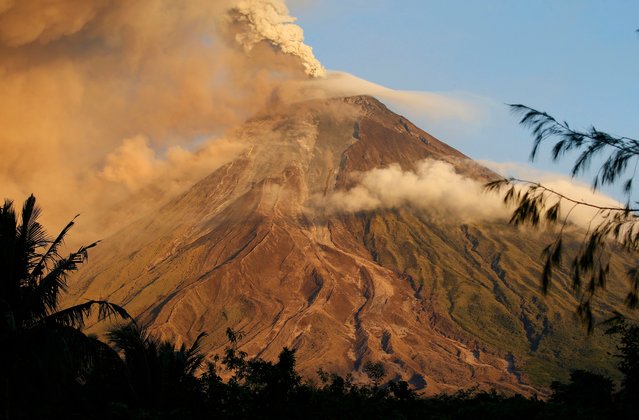 Mayon volcano spews red-hot lava in another eruption as seen from Legazpi city, Albay, around 340 kilometers (200 miles) southeast of Manila, Philippines, Wednesday, January 24, 2018. Lava fountaining regularly from the Philippines' most active volcano has flowed up to 3 kilometers (1.86 miles) from the crater in a dazzling but increasingly dangerous eruption. Mount Mayon has spewed lava up to 600 meters (2,000 feet) high at times Tuesday and early Wednesday and its ash plumes stretched up to 5 kilometers (3 miles) above the crater. (Photo by Bullit Marquez/AP Photo) 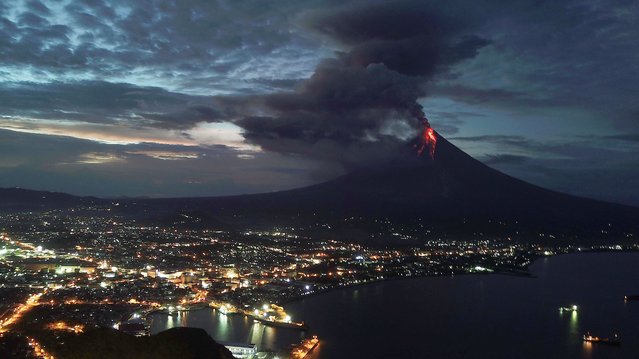 A view of Mayon Volcano erupts anew in Legaspi city, Albay province, Philippines 23 January 2018. The Philippine Institute of Volcanology and Seismology agency (PHIVOLCS) on January 22 raised the alert level for Mayon volcano amid fears of a bigger eruption over the next few hours or days. More than 26 thousand people have been evacuated to shelters in the area. “The Danger Zone is extended to eight kilometers radius from the summit vent. The public is strongly advised to be vigilant and desist from entering this danger zone”, PHIVOLCS added. (Photo by Zalrian Z. Sayat/EPA/EFE/Rex Features/Shutterstock) 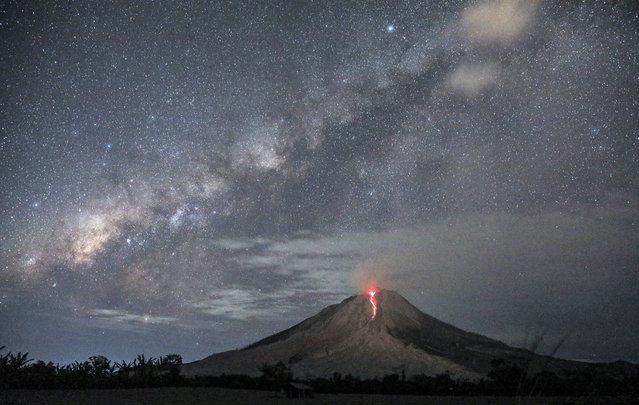 A long exposure picture shows molten lava spilling from the Mount Sinabung as seen from Sukandebi village in Karo, North Sumatra, Indonesia, 02 August 2017. Mount Sinabung is one of the most active volcanos in Indonesia. It erupted in 2010 and since then killed 16 people in eruptions in 2014 and another nine people in 2016. (Photo by Dedi Sinuhaji/EPA) 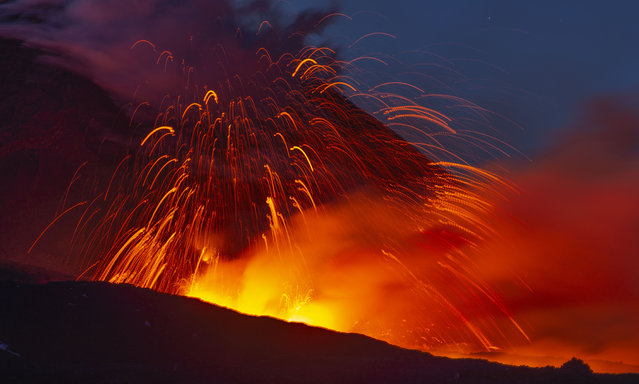 In this photo taken on Thursday, May 30, 2019 and made available Friday, May 31, 2019 Mount Etna volcano spews lava during an eruption. Mount Etna in Sicily has roared back into spectacular volcanic action from Thursday morning, sending up plumes of ash and spewing lava. (Photo by Salvatore Allegra/AP Photo) 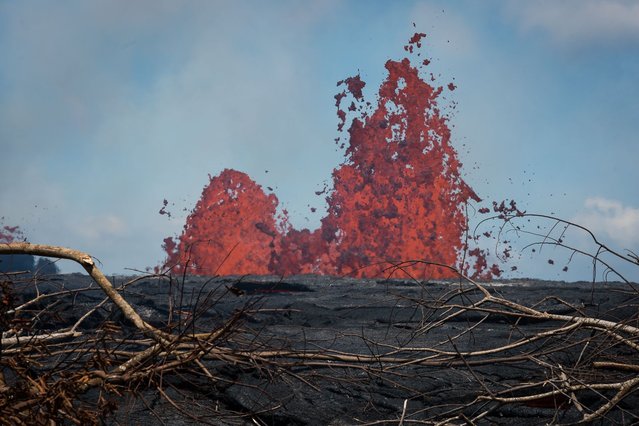 Fissure #21 of the Kilauea volcano is seen on May 22, 2018 in the Leilani Estates subdivision of Pahoa, Hawaii. Authorities in Hawaii have warned of dangerous “laze” fumes as molten lava from the erupting Kilauea volcano reached the Pacific Ocean. Two lava flows “reached the ocean along the southeast Puna coast overnight”, on Hawaii's Big Island, the US Geological Survey, which monitors volcanoes and earthquakes worldwide, said in a statement May 20, 2018. (Photo by Ronit Fahl/AFP Photo)
Edit Del
04 Jun 2019 00:03:00, post received 0 comments
Publication archive:
←   →
Popular tags:
All tags
Last searches: