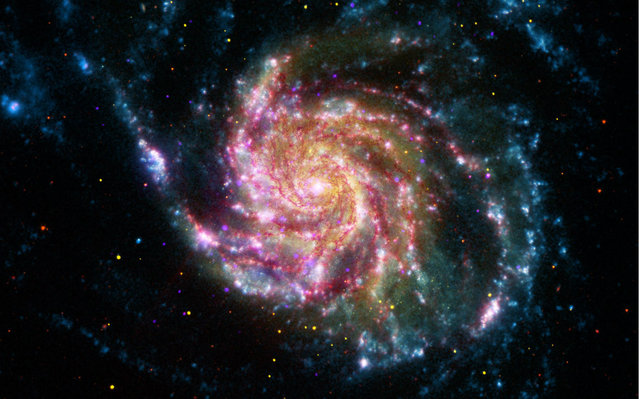 This image of the Pinwheel Galaxy, also known as M101, combines data in the infrared, visible, ultraviolet and X-rays from four of NASA's space-based telescopes. The multispectral view, released on May 24, shows that both young and old stars are evenly distributed along M101's tightly wound spiral arms. Such composite images allow astronomers to see how features in one part of the spectrum match up with those seen in other parts. (Photo by NASA / ESA / CXC / JPL) 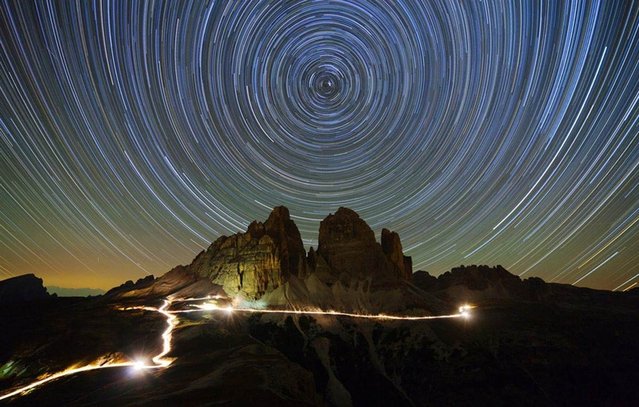 “Startrails Over Dolomites” by German astrophotographer Christoph Otawa won second-place honors in the “Beauty of the Night Sky” category of the 2012 “Earth & Sky” contest. The annual contest, presented by The World at Night, highlights images that blend earthly landscapes and night-sky vistas. (Photo by Christoph Otawa/The World at Night) 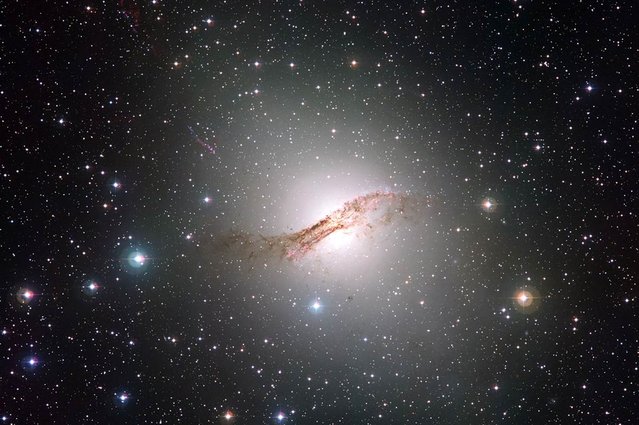 A photograph taken by the Wide Field Imager on the European Southern Observatory's MPG/ESO 2.2-meter telescope in Chile shows the massive elliptical galaxy Centaurus A, with a black hole at its center. With a total exposure time of more than 50 hours, this image is probably the deepest view of this peculiar and spectacular object every created. The image was released on May 16. (Photo by AFP) 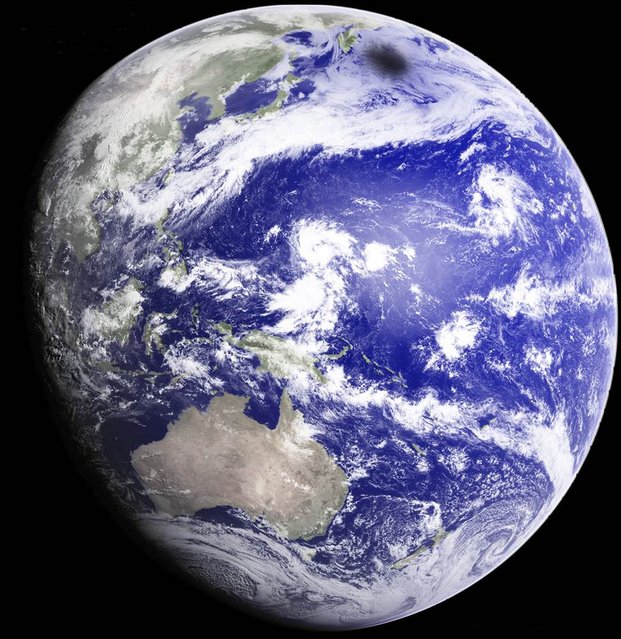 What's that dark spot on planet Earth? It's the shadow of the moon. The image was taken by Japan's MTSAT weather satellite on May 20 during an annular eclipse of the sun. During the eclipse, the sun was almost entirely blotted out by the moon's disk, as seen from areas of Asia and North America. The resulting shadow moved across Earth at more than 1,000 miles an hour. (Photo by PHL/UPR Arecibo (phl.upr.edu)) 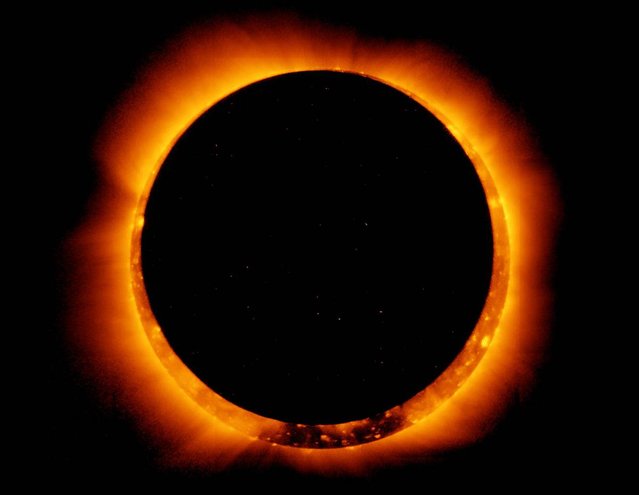 Japan's Hinode satellite provided this view of the “Ring of Fire” eclipse from outer space on May 20, 2012. During an annular solar eclipse, the moon's angular size is too small to cover the sun completely, leaving a thin ring of the sun's disk visible even at the height of the event. (Photo by NASA) 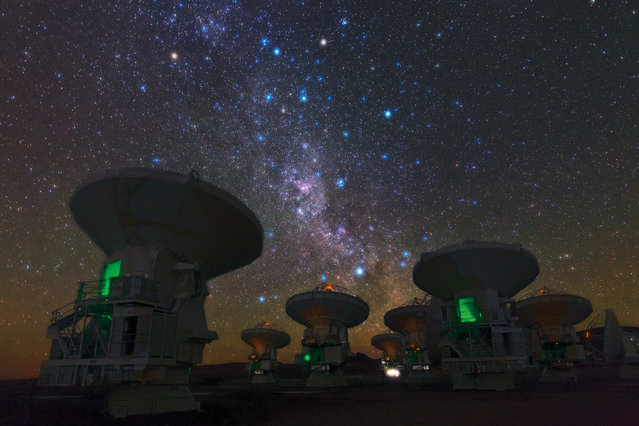 The antennas of the European Southern Observatory's Atacama Large Millimeter/Submillimeter Array, also known as ALMA, are set against the splendor of the Milky Way in this picture by Babak Tafreshi. Construction of the full ALMA array is due to be completed in Chile's Atacama Desert in 2013, but the facility is already making scientific observations with a partial array of antennas. (Photo by ESO/B. Tafreshi/TWAN)

This view of the Cygnus-X complex, released by the European Space Agency on May 10, 2012 highlights chaotic networks of dust and gas that point to sites where massive stars are being formed. The picture was produced from infrared imaging data gathered by ESA's Herschel space telescope in 2010. (Photo by Martin Hennemann / ESA / PACS / SPIRE) 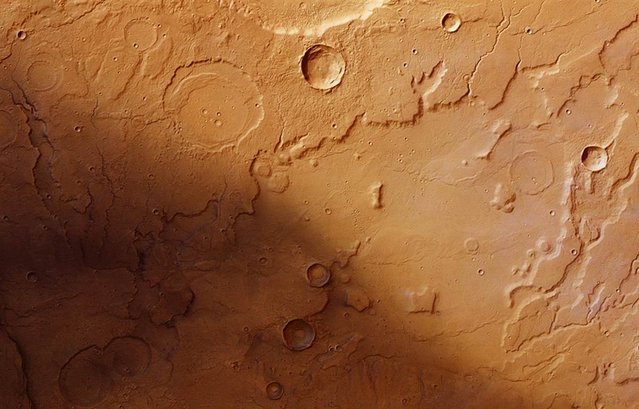 An image from the European Space Agency's Mars Express orbiter, released on May 4, 2012 shows channels cut into the terrain of Acidalia Planitia and Tempe Terra on the Red Planet. The channels serve as strong evidence for the existence of water in Mars’ past. (Photo by ESA / DLR / FU Berlin (G. Neukum)) 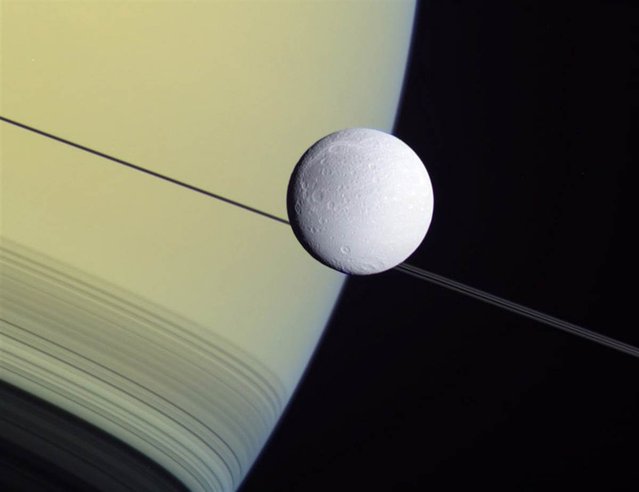 This wide-angle view from NASA's Cassini probe shows the Saturnian moon Dione set against the giant planet's disk and rings on May 2, 2012. Dark shadows from the edge-on rings fall on Saturn's cloud tops in this color composite view, assembled by the Planetary Society's Emily Lakdawalla. (Photo by Emily Lakdawalla / NASA / JPL / SSI) 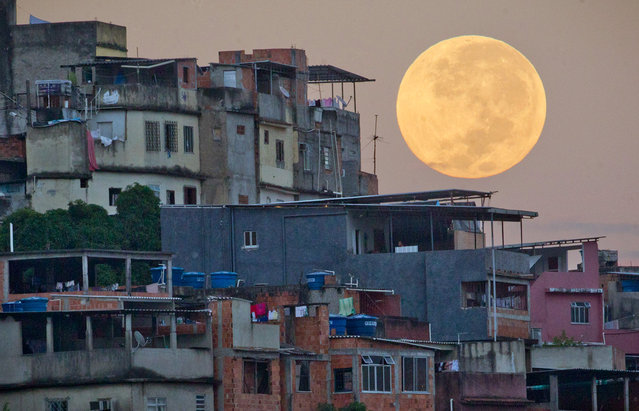 A full moon looms above the Mare shanty town complex in Rio de Janeiro, Brazil, on May 6, 2012. The sight came to be called a “supermoon” because it was the closest and biggest full moon of the year. The moon's apparent size was 14 percent larger than it would be at minimum size. (Photo by Victor R. Caivano/AP) 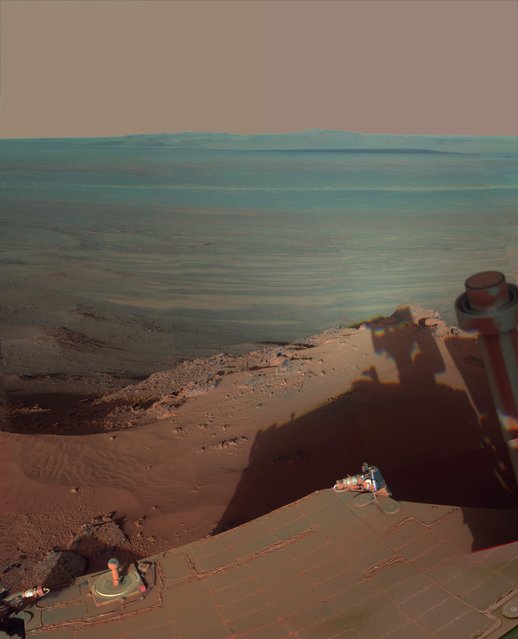 NASA's Opportunity rover catches its own late-afternoon shadow in a view looking eastward across Endeavour Crater on Mars. Endeavour measures 14 miles across, encompassing a crater with about as much area as the city of Seattle. The colors in this picture, released May 22, 2012 have been tweaked to highlight surface differences. (Photo by NASA / JPL-Caltech / Cornell) 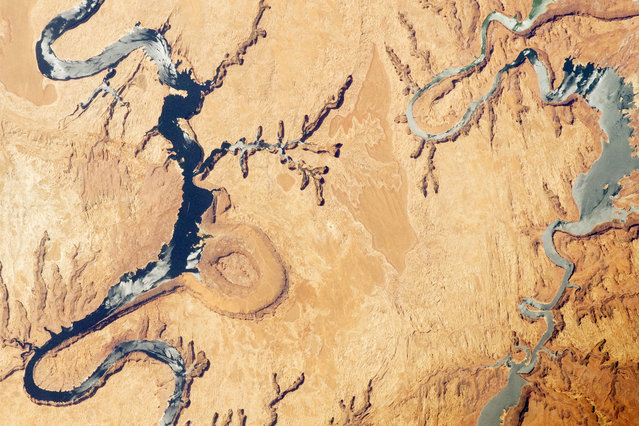 An April 30, 2012 photo taken from the International Space Station highlights part of Lake Powell, which extends across southeastern Utah and northeastern Arizona. Lake Powell started filling in 1963 when the Glen Canyon Dam was completed along the Colorado River in Arizona. The serpentine surface of the reservoir is highlighted by gray regions of sungliint in this orbital view. The doughnut-shaped feature toward center left is called the Rincon. It's an entrenched and abandoned loop of the Colorado River, thought to have formed several thousand years ago when the river cut straight across the ends of the loop. (Photo by NASA) 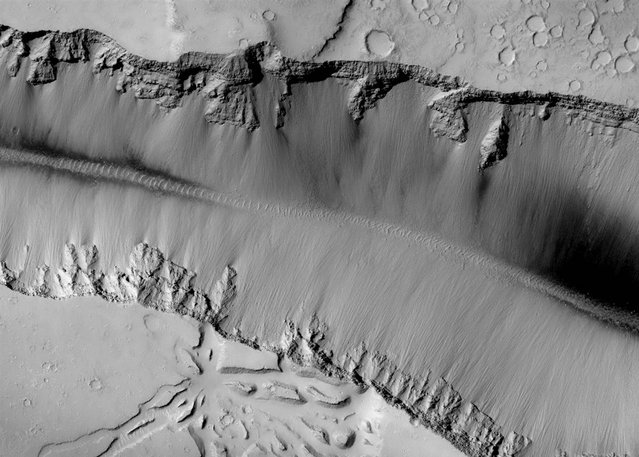 The high-resolution camera on NASA's Mars Reconnaissance Orbiter captured this picture of landforms near Grota Valles on Mars. The landforms are quite diverse. The image, released on May 30, shows a segment of Cerberus Fossae (a deep trough extending from east to west) as well as surrounding terrain that has been eroded by some fluid, either water or lava. (Photo by NASA / JPL / University of Arizona) 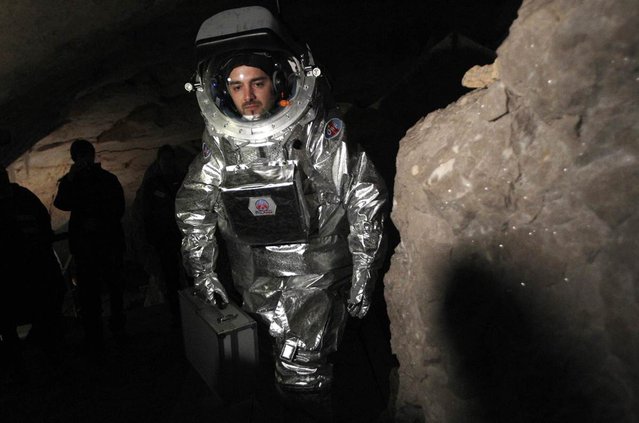 Physicist Daniel Schildhammer wears the Aouda.X spacesuit simulator during a field test inside Austria's Dachstein ice caves on April 28, 2012. The Alpine caves served as a “scientific playground” to test the technologies needed for an eventual mission to Mars. (Photo by Lisi Niesner/Reuters) 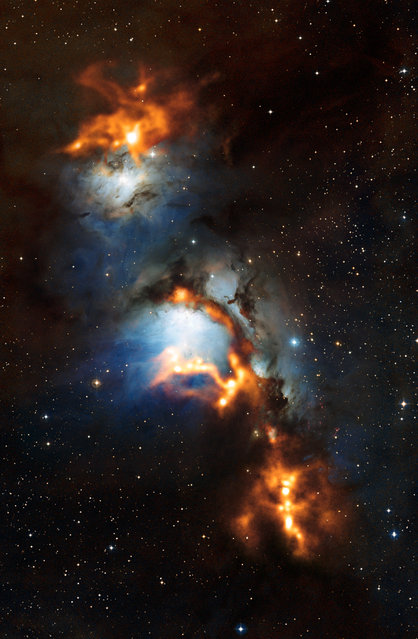 This image of the region surrounding the reflection nebula Messier 78, just north of Orion’s belt, shows clouds of cosmic dust threaded through the nebula like a string of pearls. The submillimeter-wavelength observations, made with the European Southern Observatory's Atacama Pathfinder Experiment (APEX) telescope and shown here in orange, use the heat glow of interstellar dust grains to show astronomers where new stars are being formed. APEX's observations are overlaid on a view of the region in visible light. (Photo by T. Stan / ESO / APEX (MPIfR / OSO)) 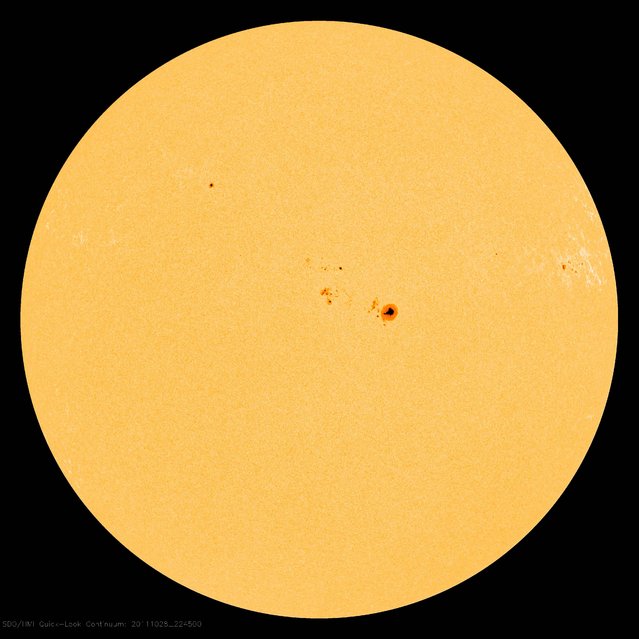 This May 9, 2012 image of the sun, captured by NASA's Solar Dynamics Observatory, shows the huge sunspot complex known as AR 1476. The active region measured more than 60,000 miles (100,000 kilometers) across and was crackling with M-class solar flares. (Photo by AFP) 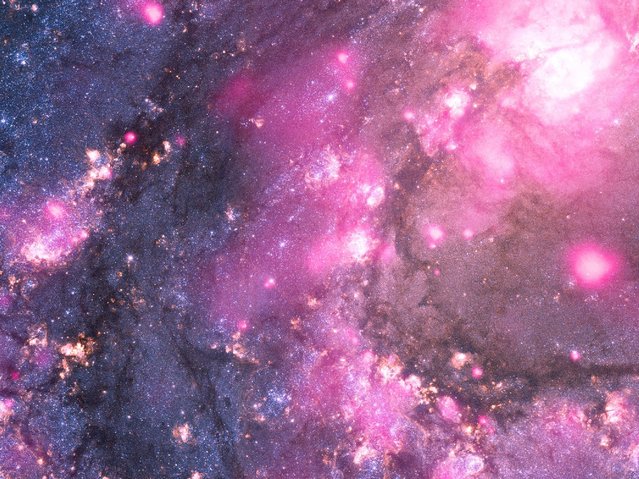 This NASA image, obtained April 30, 2012 shows an outburst produced by a black hole in the nearby galaxy M83. Observations from the Chandra X-ray Observatory are providing new insight into the nature of a mysterious class of black holes that can produce as much energy in X-rays as a million suns radiate at all wavelengths. Researchers used Chandra to discover a new ultraluminous X-ray source, or ULX. (Photo by AFP)
Edit Del
03 Jun 2012 11:57:00, post received 0 comments
Publication archive:
←   →
Popular tags:
All tags
Last searches: