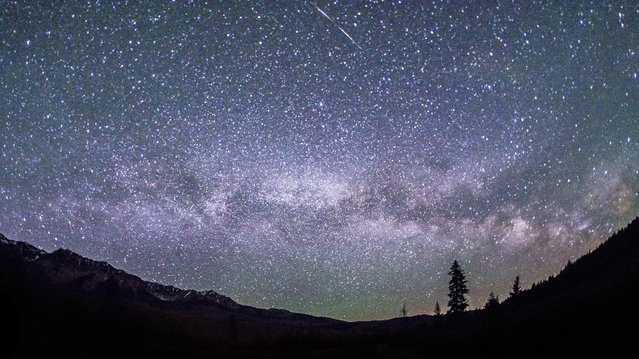 This June 4, 2016 photo provided by Nils Ribi Photography shows the Milky Way in the night sky at the foot of the Boulder Mountains in the Sawtooth National Recreation Area, Idaho. Tourists heading to central Idaho will be in the dark if local officials get their way. The nation's first International Dark Sky Reserve will fill a chunk of the sparsely populated region containing night skies so pristine that interstellar dust clouds are visible in the Milky Way. (Photo by Nils Ribi Photography via AP Photo) 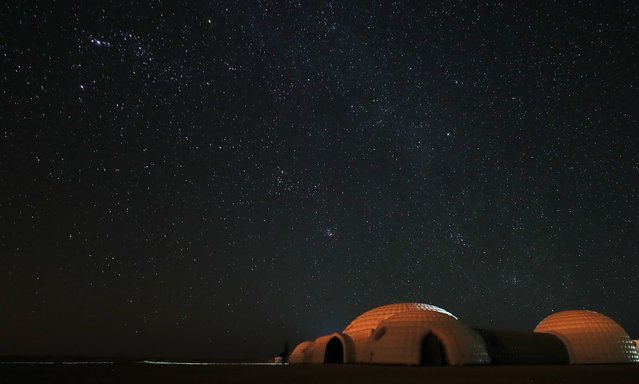 A picture taken on February 7, 2018 shows a simulation Mars habitat, with a view of the night sky above in Oman' s Dhofar desert, during an analog field simulation in a collaboration between the Austrian Space Forum and the Oman National Steering Comittee preparing for future human Mars missions. (Photo by Karim Sahib/AFP Photo) 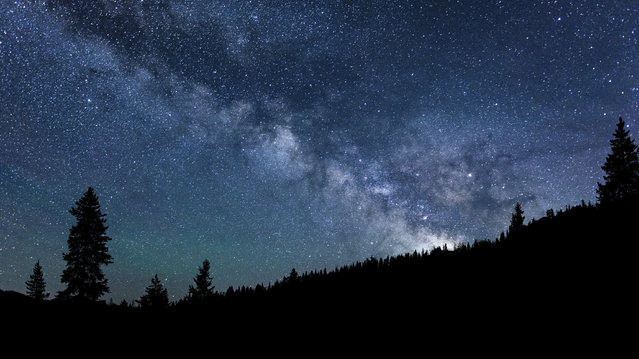 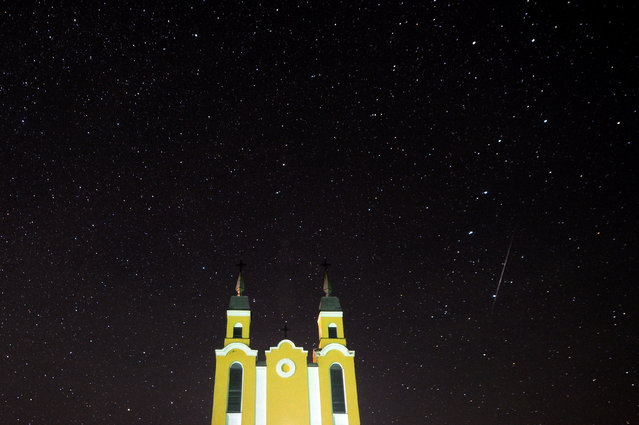 A meteor streaks across the sky behind a Catholic church during the annual Geminid meteor shower in the village of Krevo, some 100 km northwest of Minsk, on December 14, 2017. (Photo by Sergei Gapon/AFP Photo) 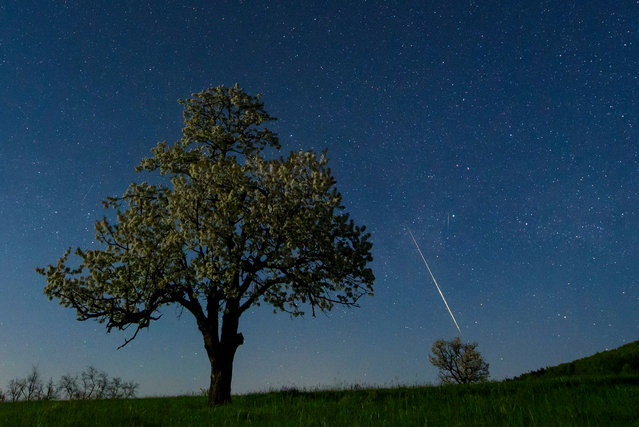 Tiny pieces of space rocks, called meteorites, are seen burning in the atmosphere over the night sky near Salgótarján, some 109km northeast of Budapest, Hungary, 21 April 2018 (issued 22 April 2018). (Photo by Peter Komka/EPA/EFE) 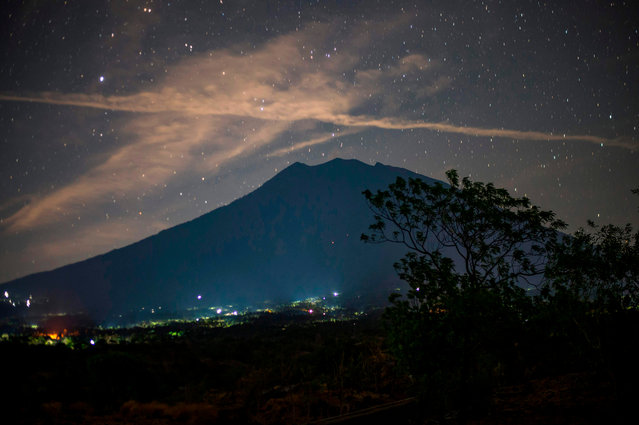 This long exposure photograph shows Mount Agung under a starry sky as seen from Kubu in Karangasem on the Indonesian resort island of Bali on September 28, 2017. Indonesian authorities are on standby to divert flights destined for the holiday island of Bali as increasingly frequent tremors from a rumbling volcano stoke fears an eruption could be imminent. (Photo by Bay Ismoyo/AFP Photo) 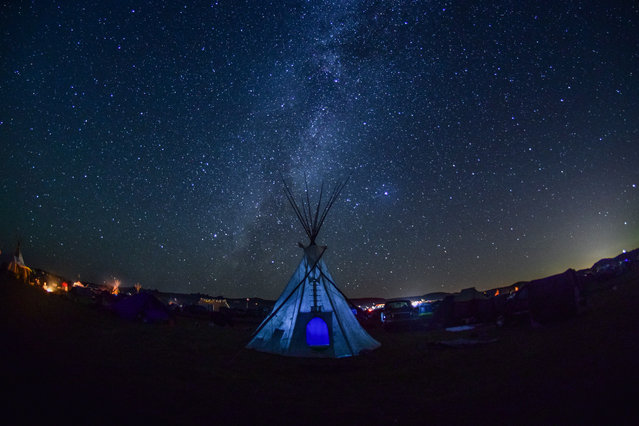 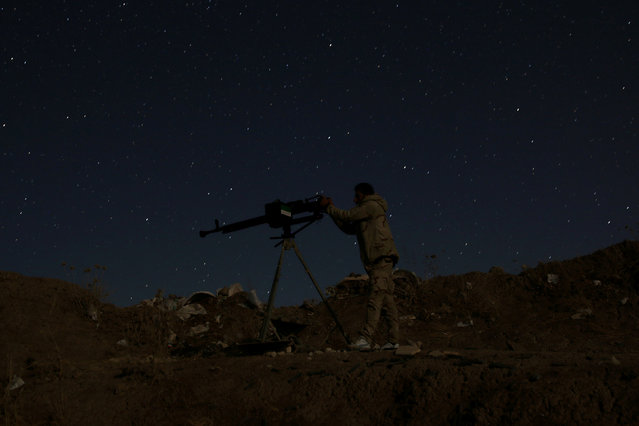 A Free Syrian Army fighter is seen at night in the rebel-held area, in the town of Dael, Syria July 29, 2017. (Photo by Alaa al-Faqir/Reuters) 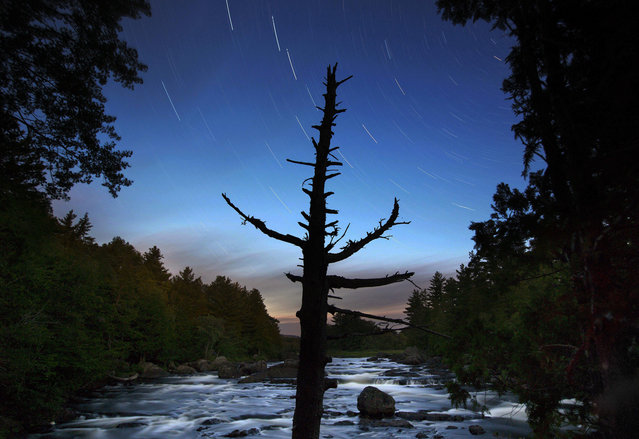 In this Wednesday, August 9, 2017 photo, a dead spruce tree stands on the shore of the East Branch of the Penobscot River in this time exposure in the Katahdin Woods and Waters National Monument near Patten, Maine. Interior Secretary Ryan Zinke wants to retain the newly created monument but said he might recommend adjustments to the White House on Thursday, Aug. 24, 2017. (Photo by Robert F. Bukaty/AP Photo) 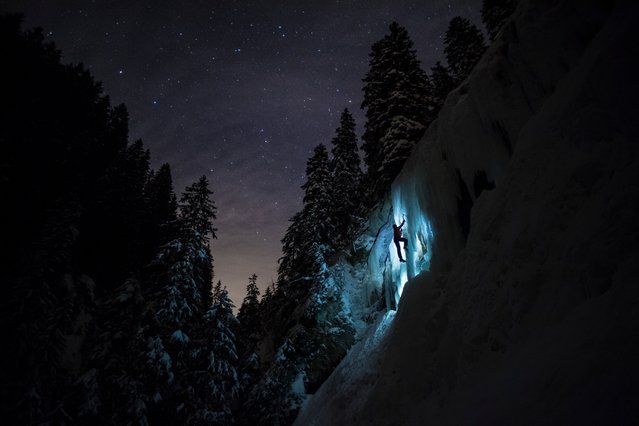 In this February 14, 2018 photo Pierre, a member of Team Arnicare, climbs an Ice Cascade during a night-time training session under a stary night near La Lecherette in the Hongrin region, in canton Vaud, Switzerland. (Photo by Anthony Anex/Keystone via AP Photo) 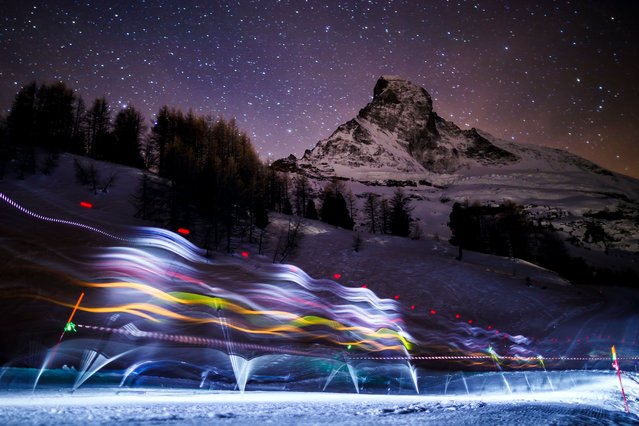 Competitors climb in front of the Matterhorn mountain at the start of the 21st Glacier Patrol race in Stafel outside the ski resort of Zermatt, Switzerland, 18 April 2018. The Glacier Patrol (Patrouille des Glaciers in French), organized by the Swiss Army, takes place from April 17 to 21. Highly-experienced hiker-skiers trek for over 53km (3994m ascent and 4090m descent) along the Haute Route along the Swiss-Italian border from Zermatt to Verbier. (Photo by Valentin Flauraud/EPA/EFE/Rex Features/Shutterstock) 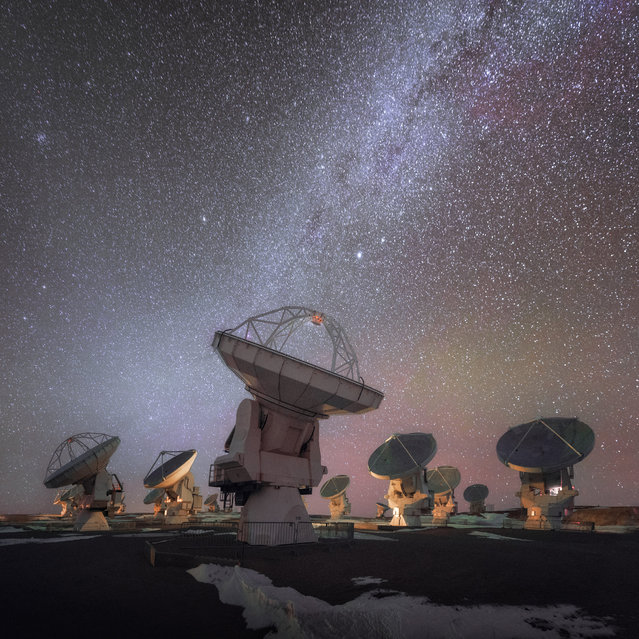 The Milky Way galaxy hangs in the sky over the antennas of the Atacama Large Millimeter/submillimeter Array (ALMA) in the desert of northern Chile on October 6, 2017. In dry areas, telescopes can see starlight that would otherwise be blocked by the atmosphere. (Photo by D. Kordan/ESO)
Edit Del
24 Apr 2018 00:03:00, post received 0 comments
Publication archive:
←   →
Popular tags:
All tags
Last searches: