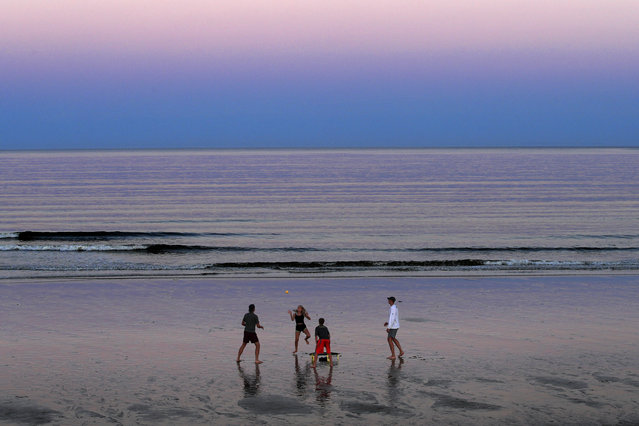 A group of people play Spikeball at twilight on the beach, Thursday, August 7, 2020, in Ocean Park, Maine. As the summer tourist season reaches its peak Maine's coronavirus positivity rate remains among the lowest in the nation. (Photo by Robert F. Bukaty/AP Photo) 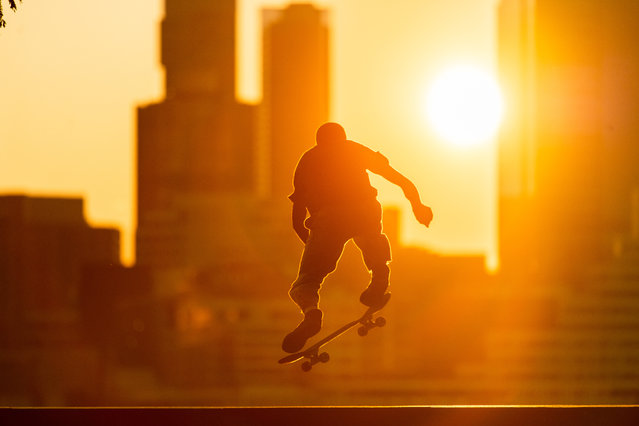 A skateboarder enjoys the outdoors at to Rockefeller Park in lower Manhattan wear face masks during the fourth phase of the coronavirus reopening on August 05, 2020 in New York, New York. The fourth phase allows outdoor arts and entertainment, sporting events without fans and media production. (Photo by Roy Rochlin/Getty Images) 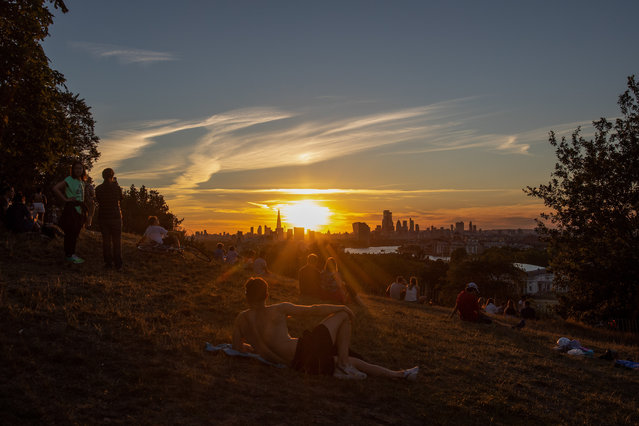 Pedestrians watch the sun set over skyscrapers on the skyline from Greenwich Park in London, U.K., on Thursday, July 30, 2020. London's best offices are forecast to plunge in value by as much as 15% this year as the coronavirus hits rents and investors' appetite for real estate. (Photo by Simon Dawson/Bloomberg via Getty Images 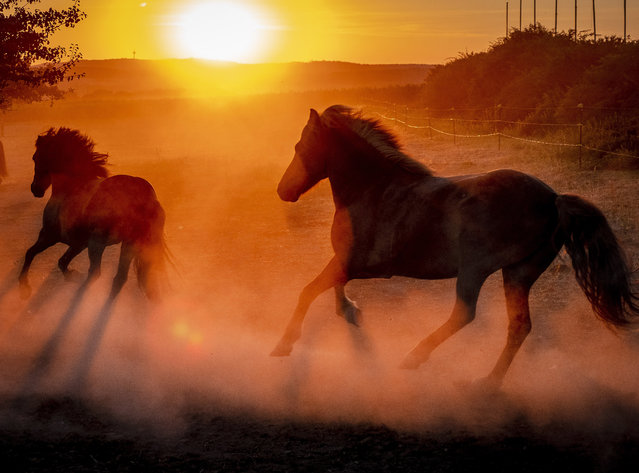 Iceland horses raise dust as they run in their paddock at a stud farm as the sun rises early Wednesday, August 5, 2020, in Wehrheim near Frankfurt, Germany. Germany expects a heat wave for the next few days. (Photo by Michael Probst/AP Photo) 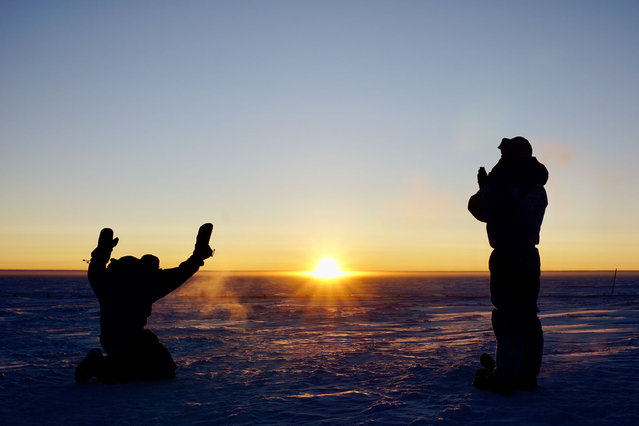 After four months of darkness, the Sun finally rises on 11 August at Concordia research station in Antarctica. The crew are understandably reverent. ESA-sponsored medical doctor Stijn Thoolen (left) and engineer Wenceslas Marie-Sainte (right) are part of the 12-member crew spending an entire year at Concordia. For nine months they are holding down the base in one of the most isolated, confined and extreme environments on Earth, with no way in or out of the station. They run experiments in human physiology and biology, atmospheric physics, meteorology and astronomy, among other disciplines, as well as maintain the base – one of only three to run year-round on the Antarctic Peninsula. (Photo by S. Thoolen/ESA/IPEV/PNRA) 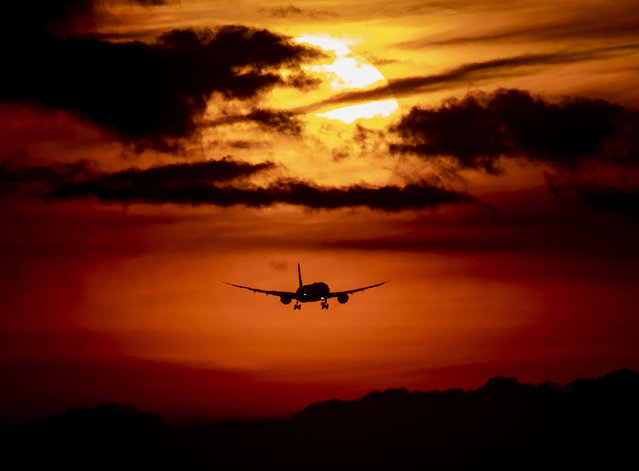 An aircraft approaches the airport in Frankfurt, Germany, as the sun rises on Thursday, August 27, 2020. With more and more tourists coming back from vacation rising numbers over Covid-19 infections are expected all over Germany. (Photo by Michael Probst/AP Photo) 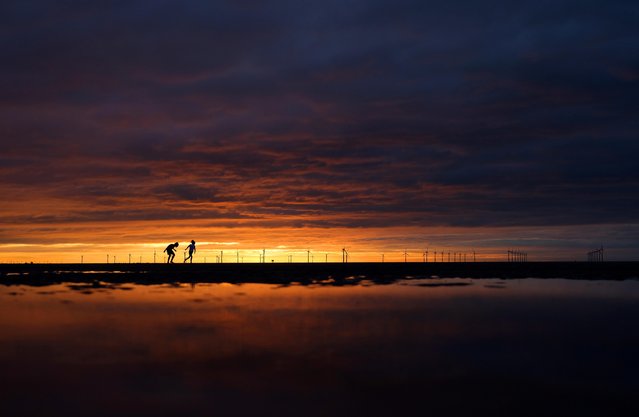 Children run along the beach at sunset in New Brighton, Britain, August 6, 2020. (Photo by Phil Noble/Reuters) 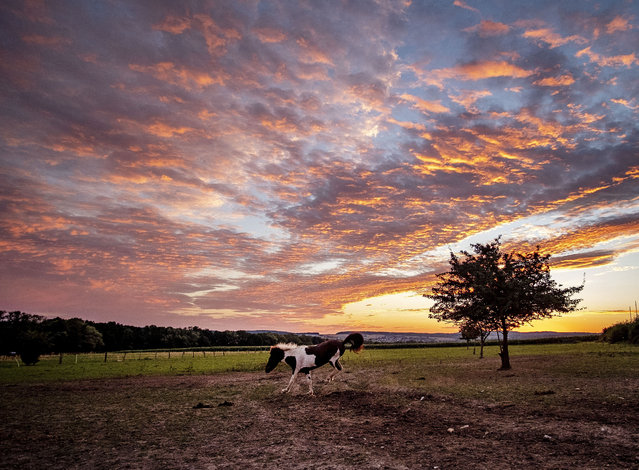 An Icelandic horse frolics in its paddock at a stud farm in Wehrheim near Frankfurt, Germany, just before sunrise on Friday, August 21, 2020. Germany expects one of its hottest day this year. (Photo by Michael Probst/AP Photo) 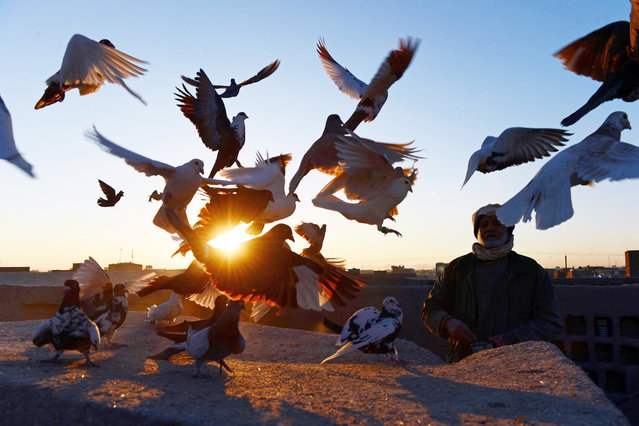 In this photograph taken on December 4, 2014, Afghan pigeon fancier Abas Aqa feeds his birds as some take flight on the rooftop of his residence in Herat. Aqa, 65, who owns some one hundred pigeons, has been flying pigeons – a pastime locally known as “kaftar baazi” or play of the pigeons – for the past 50 years. (Photo by Aref Karimi/AFP Photo) 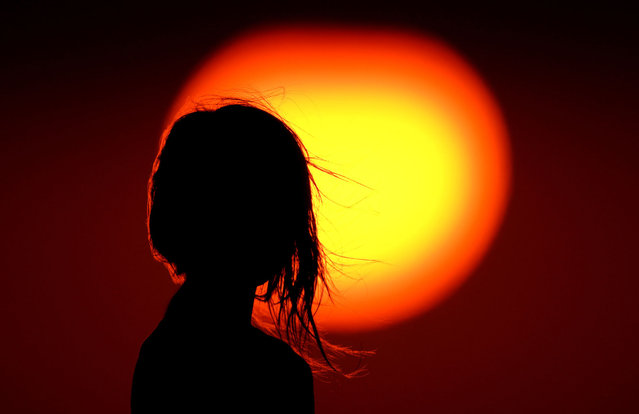 A girl watches the sunset from a park in Kansas City, Mo. as a hot summer day comes to an end Wednesday, August 26, 2020. Sunsets have been a bit more colorful than normal as smoke from California wildfires drifts into the central part of the country. (Photo by Charlie Riedel/AP Photo) 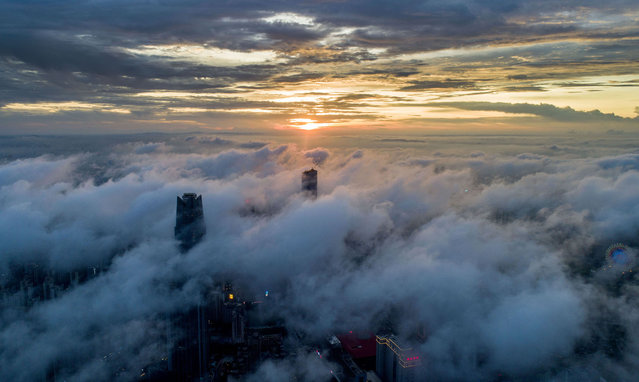 More than 300 meters tall buildings are hazy in the sunset cloud in Nanning, Guangxi province, China, on the evening of August 7, 2020. (Photo by Costfoto/Barcroft Media via Getty Images) 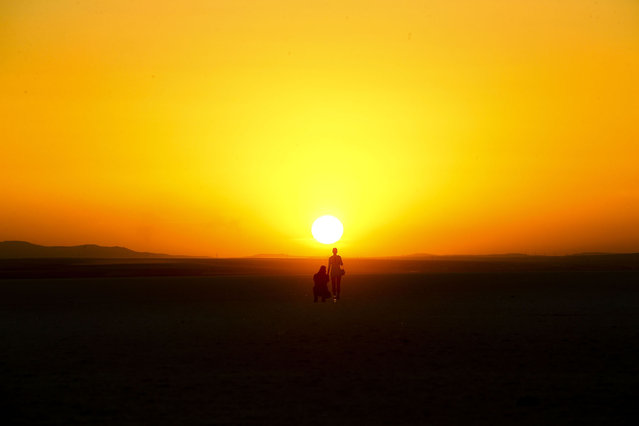 Silhouette of people are seen during the sunset in Lake Salt in Ankara, Turkey on August 07, 2020. Lake Salt is one of the most important wetlands and has a significant importance for the conservation of biodiversity in Turkey. (Photo by Halil Sagirkaya/Anadolu Agency via Getty Images) 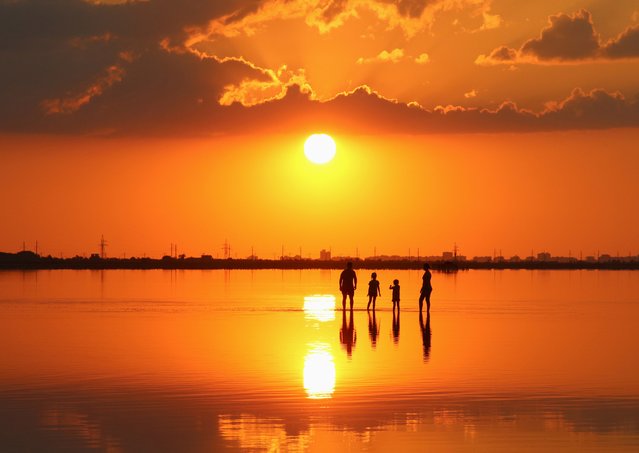 People enjoy the sunset on the bed of a drained area of the Sasyk-Sivash lake near the settlement of Pryberezhne (Pribrezhnoye), Crimea on August 22, 2020. (Photo by Alexey Pavlishak/Reuters) 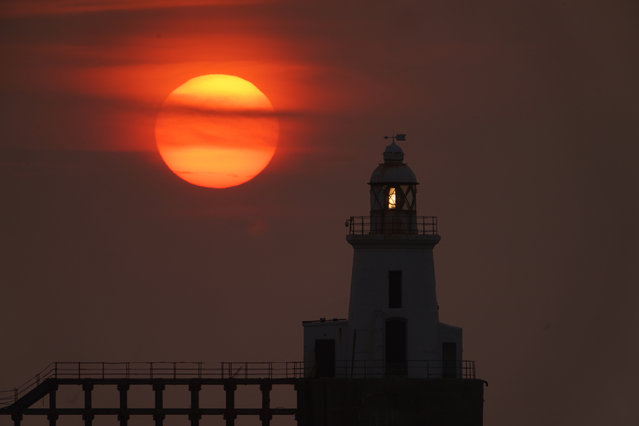 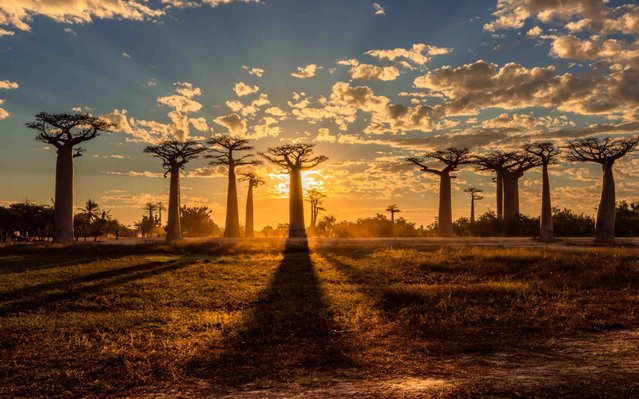