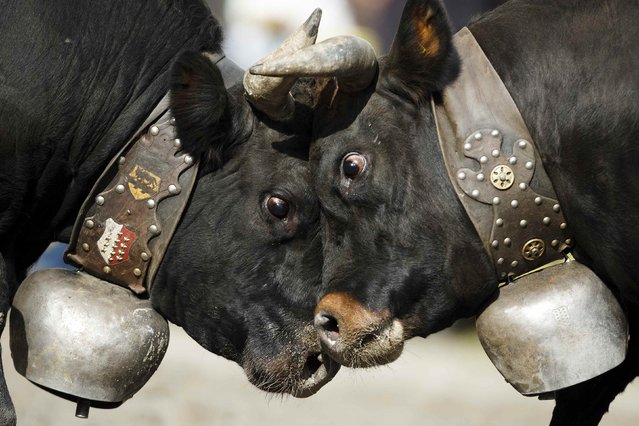 Two Herens cows lock horns during the qualification round of the annual “Battle of the Queens” cow fight finals in Aproz, in the western Alpine canton of Valais May 5, 2013. Each year when taken to the alpine pastures, the cows test their strength and fight for the herd's leadership. The competition continues until a new queen has forced all the other cows to retreat. (Photo by Valentin Flauraud/Reuters) 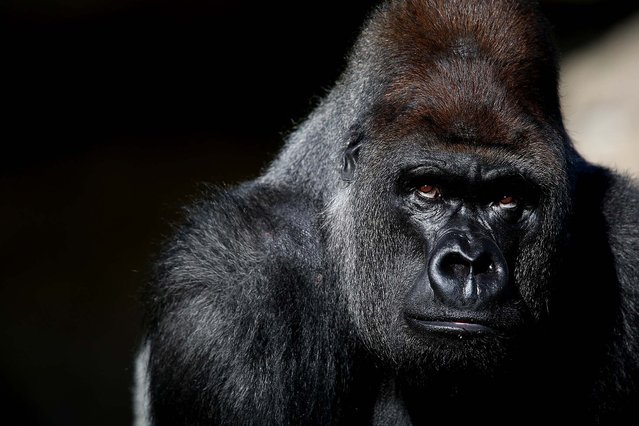 Kumbuka, a 15-year-old western lowland gorilla, explores his new enclosure in the ZSL London Zoo, on May 2, 2013. The silverback male, who weights 407 pounds and stands seven foot tall, moved from Paignton Zoo two weeks ago. It is hoped that Kumbuka will mate with the zoo's three female gorillas to increase numbers of the critically endangered species as part of the European breeding program. (Photo by Oli Scarff/Getty Images) 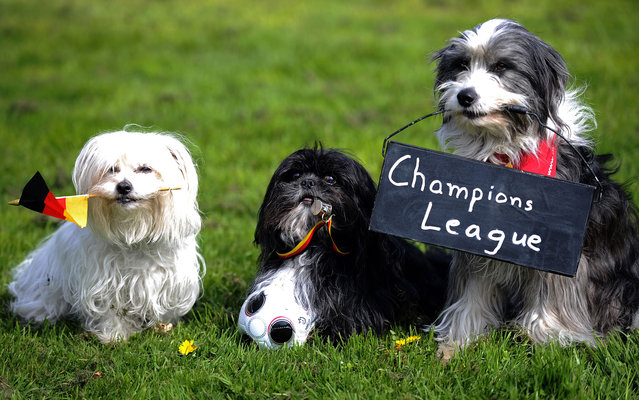 The trickdog Ben (C) performs during a press conference for the fair “dog and pet” in Dortmund, western Germany, on May 3, 2013. (Photo by Marius Becker/AFP Photo) 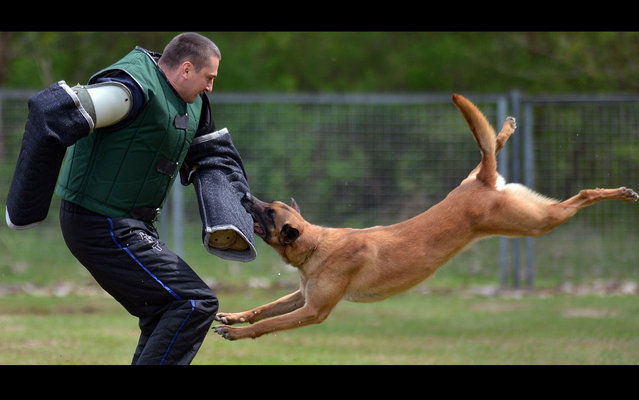 A dog trainer works with a police dog at the canine unit school in Bad Schmiedeberg, eastern Germany, on May 3, 2013. Policemen from three eastern German federal states and their dogs competed in two disciplines to present their skills. (Photo by Hendrik Schmidt/AFP Photo/DPA) 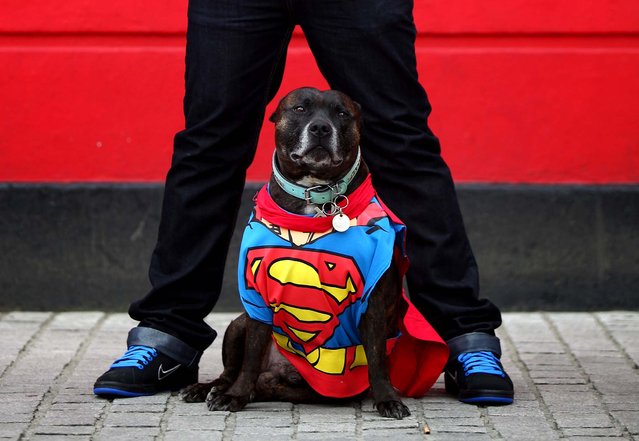 Ty, a Staffordshire Bull Terrier, is dressed as Superman by owner Anthony Farrante, on May 5, 2013. Enthusiasts gathered at the Picture House in Stratford, England, to parade their dogs dressed as famous Sci-Fi characters as part of a London-wide event called Sci-Fi London. (Photo by Jordan Mansfield/Getty Images) 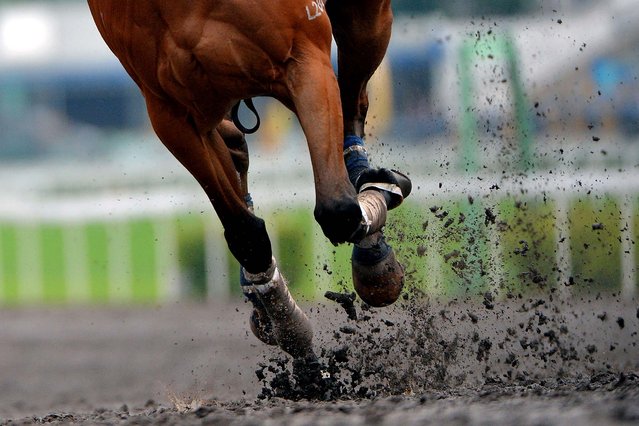 Horses dig up the dirt on the all weather track during a workout for Sunday's Champions Mile at Sha Tin race course in Hong Kong, on May 3, 2013. (Photo by Vince Caligiuri/Getty Images) 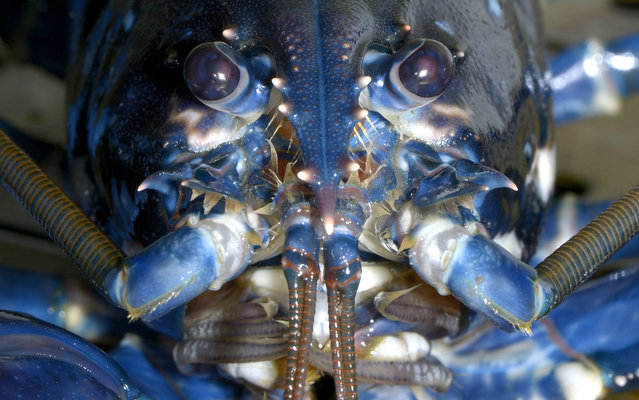 A European lobster (Hommarus gammarus) is pictured in a breeding station at the Alfred-Wegener institute (AWI) on the German island of Heligoland, about 46 kilometres away from the German coastline, on May 2, 2013. Biologists at the Alfred-Wegener Institute for Polar and Marine Research are breeding 3,000 lobsters to be released next year into the Borkum Riffgat offshore wind farm near the island 70 km off the German-Dutch coast. (Photo by Fabian Bimmer/Reuters) 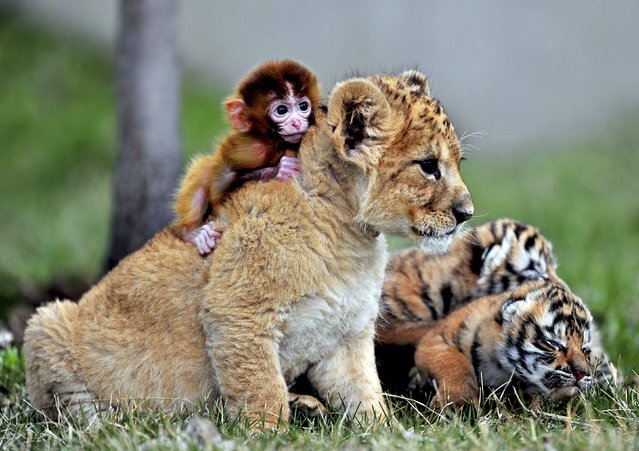 A baby monkey, a lion cub and tiger cubs play at the Guaipo Manchurian Tiger Park in Shenyang, Liaoning Province, May 1, 2013. (Photo by Reuters/Stringer) 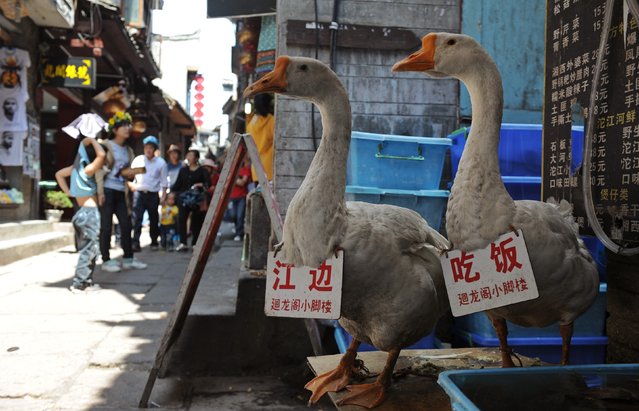 Geese carrying advertisement boards stand in front of a restaurant as a way to attract tourists in Fenghuang county, Hunan province, May 1, 2013. The bigger Chinese characters on the boards read, “Riverside” (L) and “Dining”. (Photo by Reuters/Stringer) 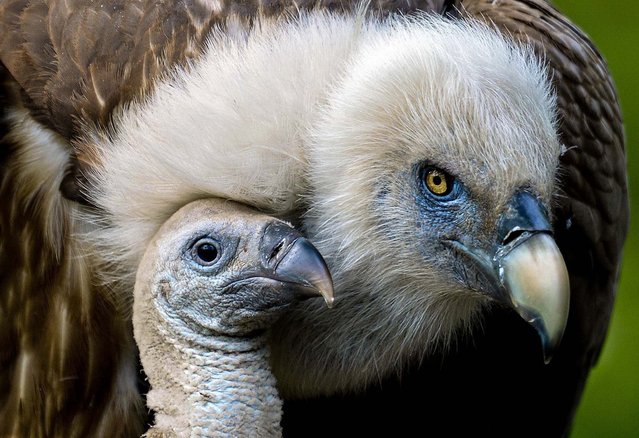 A one-month-old Eurasian griffon sits next to its mother in their nest at the Zoo of Duisburg, Germany, on May 3, 2013. (Photo by Federico Gambarini/Associated Press) 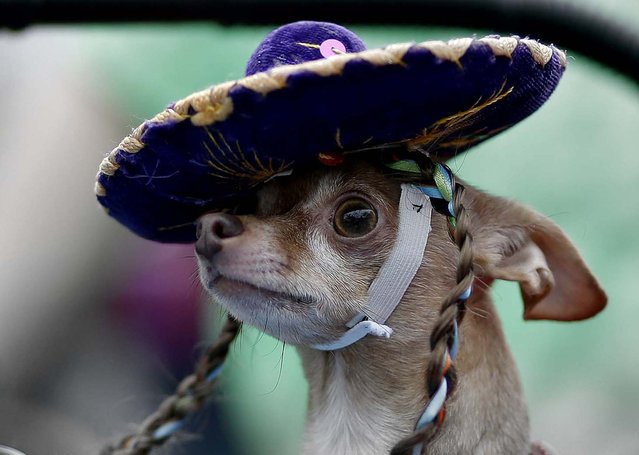 A Chihuahua wears a sombrero during the Fiesta Pooch Parade in San Antonio, on April 27, 2013. (Photo by Eric Gay/Associated Press) 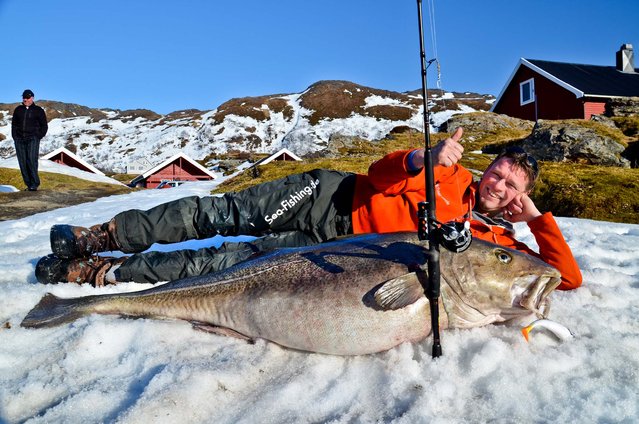 In this photo made available today, German angler Michael Eisele poses with the 103.6 pound cod fish that he caught in near Hammerfest, northern Norway, on April 28, 2013. (Photo by Soroya Havfiskesenter/NTB scanpix) 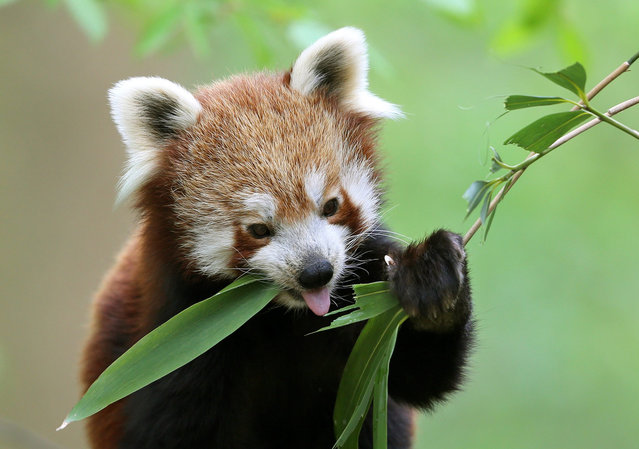 A red panda eats the leaves of a bamboo plant at the Zoo in Krefeld, Germany, 29 April 2013. (Photo by Roland Weihrauch/EPA) 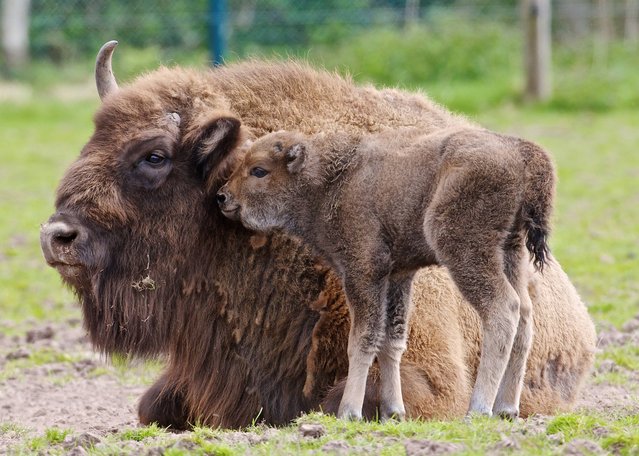 A new arrival at Fota wildlife park, a baby Bison, with mother Donna, May 1, 2013. The park are looking for the public's help to name the recently born male. The calf born on Saturday is the latest Bison born in the park, which has included 3 calves that returned to the wild in Poland in 1998. (Photo by Neil Danton) An owl butterfly sits on a banana plant at the tropical house in Krefeld, Germany, 29 April 2013. (Photo by Roland Weihrauch/EPA) 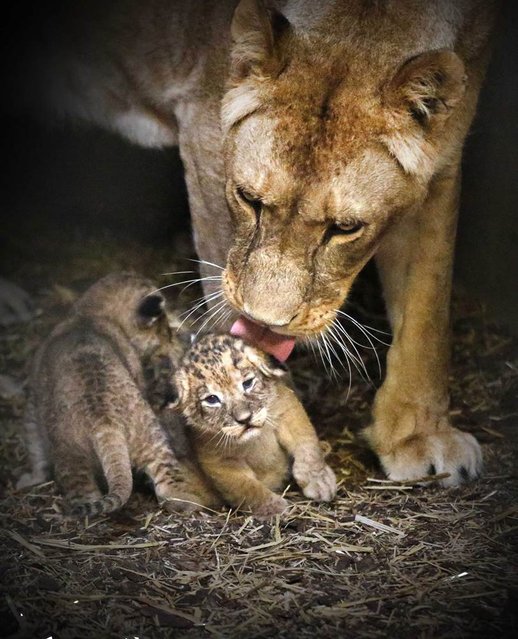 Lioness Tia licks one of her cubs as they huddle close together in their enclosure at Emmen Zoo in the Netherlands on April 27, 2013. The four cubs were born on April 7. (Photo by Catrinus Van Der Veen/EPA) 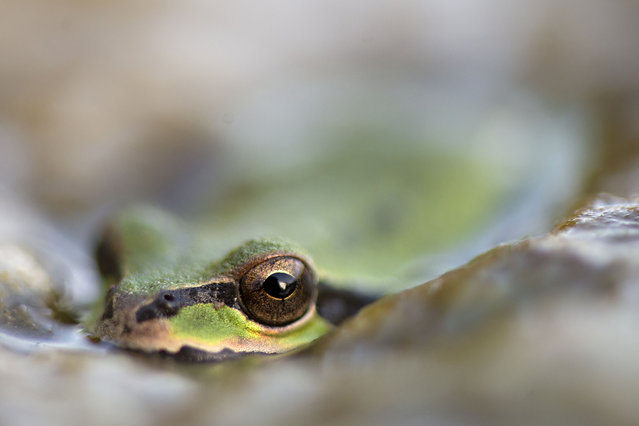 A small Pacific tree frog floats on a matt of algae in a cattle watering trough on a ranch near Elkton, Ore., on Sunday, April 28, 2013. (Photo by Robin Loznak) 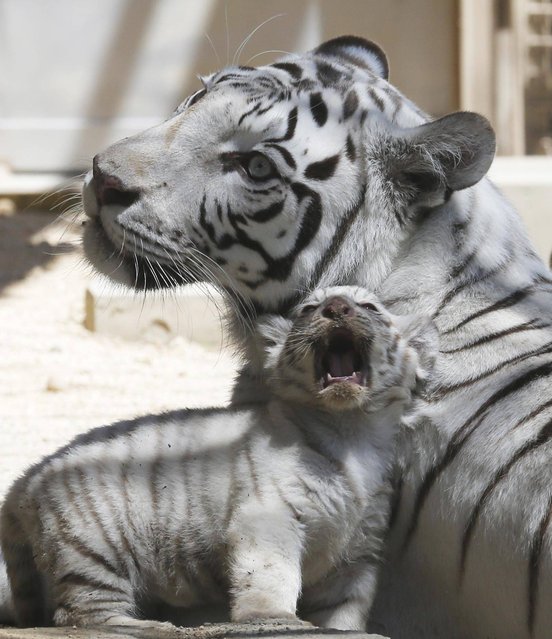 A 7-year-old white tiger sits with one of her cubs at Tobu Zoo in Miyashiro, near Tokyo, Thursday, May 2, 2013. Four newborn white tiger cubs made their first public appearance at the Zoo on Thursday. The four cubs – one female and three males – were born 46 days ago. (Photo by Koji Sasahara/AP Photo) 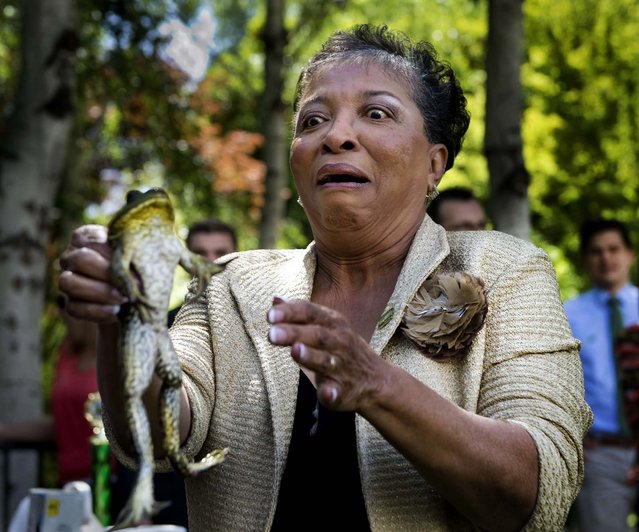 California assemblywoman Cheryl Brown reluctantly holds her frog, Larry B, before the annual frog jump competition at the State Capitol in Sacramento, on April 30, 2013. (Photo by Randy Pench/Sacramento Bee/MCT) 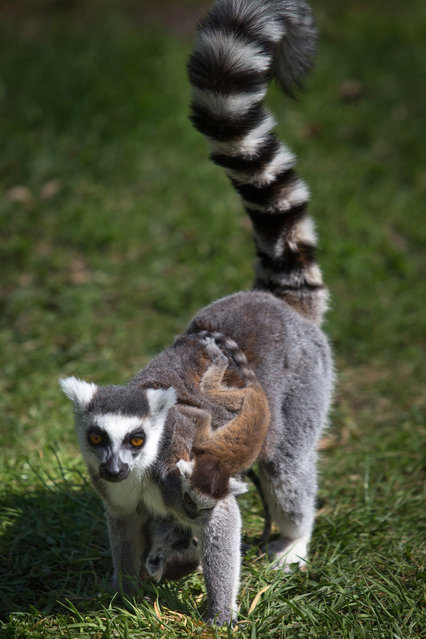 A young ring-tailed lemur with his mother in their enclosure in Wroclaw's Zoo in Wroclaw, Poland, 27 April 2013. Five lemurs were born two weeks ago at the Zoo. (Photo by Maciej Kulczynski/EPA)
Edit Del
06 May 2013 12:33:00, post received 0 comments
Publication archive:
←   →
Popular tags:
All tags
Last searches: