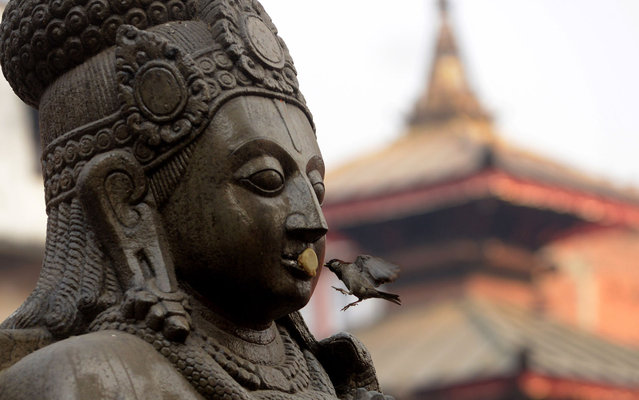 A bird picks food from the statue of the Hindu god Garuda at Basantapur Durbar square in Kathmandu on March 20, 2013. The Durbar Square holds the palaces of the Malla and Shah kings who ruled over the city, is located in the centre of the capital and is listed as a UNESCO world heritage site. (Photo by Prakash Mathema/AFP Photo) 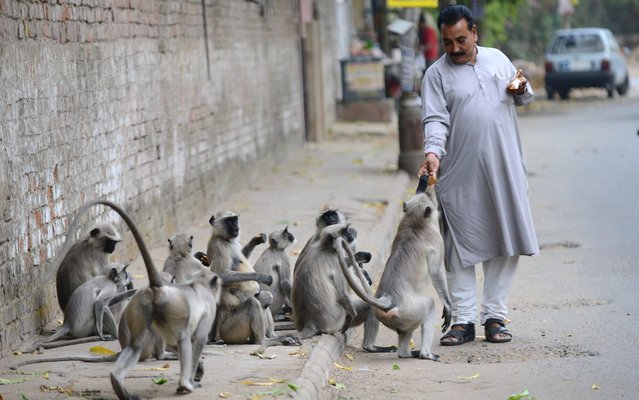 Langur Monkeys take food handouts from an Indian pedestrian in Ahmedabad on March 22, 2013. In India, monkeys are regarded as Lord Hanuman and are fed well in many regions across the country. (Photo by Sam Panthaky/AFP Photo) 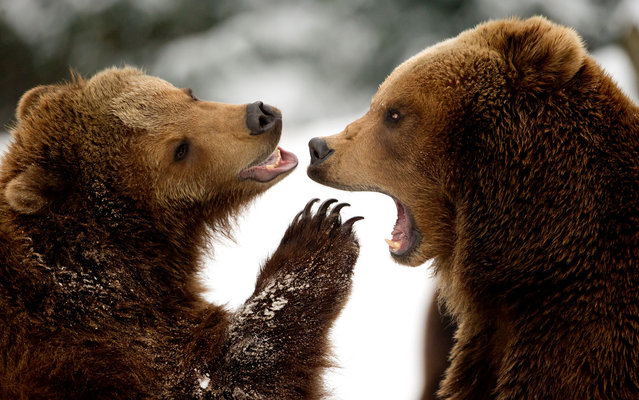 Two brown bears play in the snow on March 18, 2013 at the Tierpark Hagenbeck Zoo in Hamburg, northern Germany. Temperatures in the Hanseatic city were around the freezing point. (Photo by Sven Hoppe/AFP Photo) 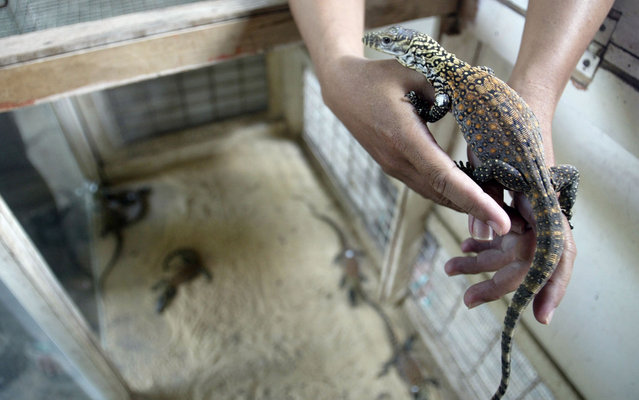 Seven cubs of Komodo dragon born after artificial incubation in a Zoo in Indonesia, on March 20, 2013. The result gives new hope for the species' reproduction. (Photo by Juni Kriswanto/AFP Photo) 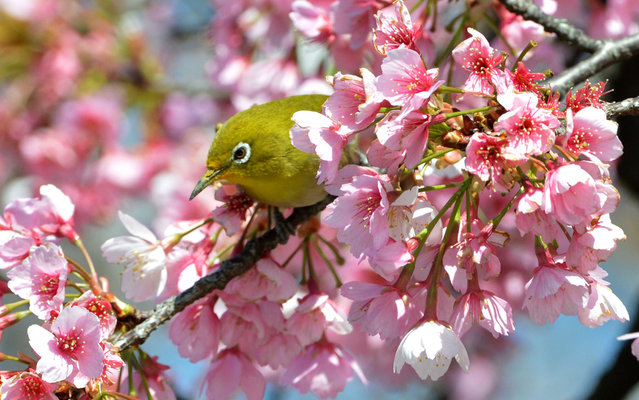 Bird is seen between cherry blossoms in Tokyo, Japan, on March 21, 2013. (Photo by Yoshikazu Tsuno/AFP Photo) 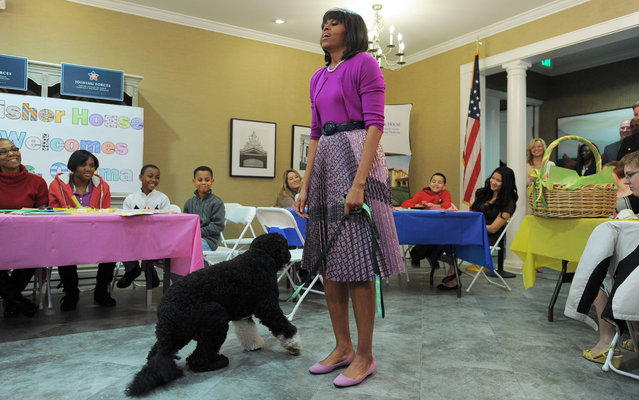 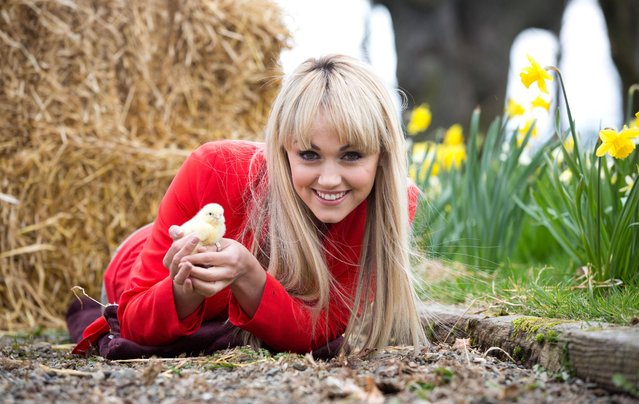 Bothar has launched its Easter appeal, asking people to play a part in rebuilding lives in some of the most deprived regions of the world through the gift of food and income producing flock of chickens. The Irish International Development Agency, is training families in how to care for flocks of chickens and providing them with the birds as well as free veterinary back-up, in communities across Africa, Asia and South America. The chicks, once they reach maturity, can lay up to 200 eggs per year, giving the family not just a key source of nutrition but also enabling them sell eggs and generate income that goes towards school fees and clothing. The chickens also provide a key source of manure to help enrich crops. A donation of 190 Euro will purchase an entire flock of chickens or alternatively donors can purchase a share of a flock for just 50 Euro. On hand to help Bothar launch the Easter appeal was broadcaster and singer Leanne Moore, who is a backing singer for Ryan Dolan in the upcoming Eurovision in what is her third year in a row to perform at the song contest. (Photo by Sean Curtin Photo) 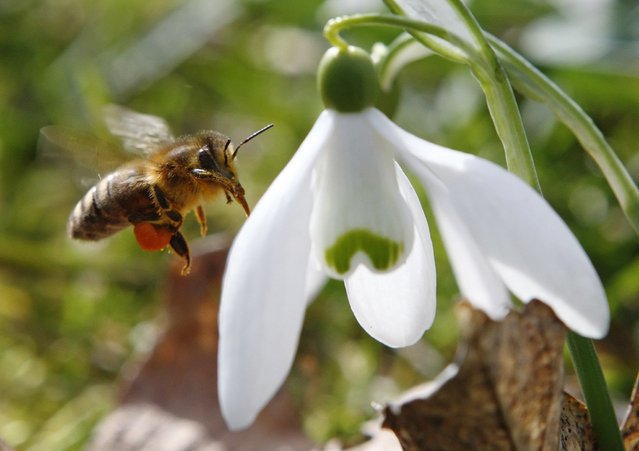 A honeybee approaches a snowdrop flower in Klosterneuburg on the first day of spring March 20, 2013. (Photo by Heinz-Peter Bader/Reuters) 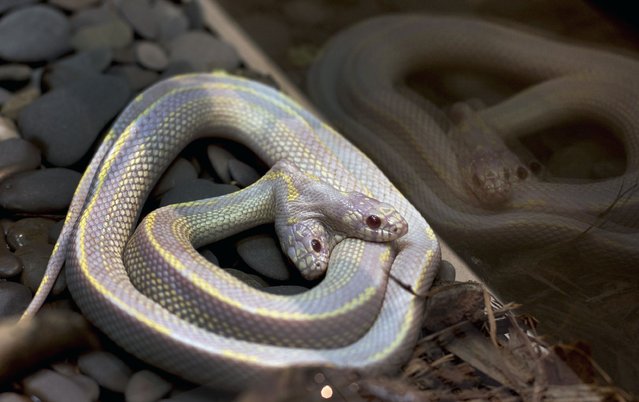 A rare two-headed albino California Kingsnake is displayed at the Moscow Zoo, on March 19, 2013. According to the zoo officials the occurrence of two-headed snakes are one in a million and they usually don't survive in the wild. (Photo by Katya Abramkina/AFP Photo) 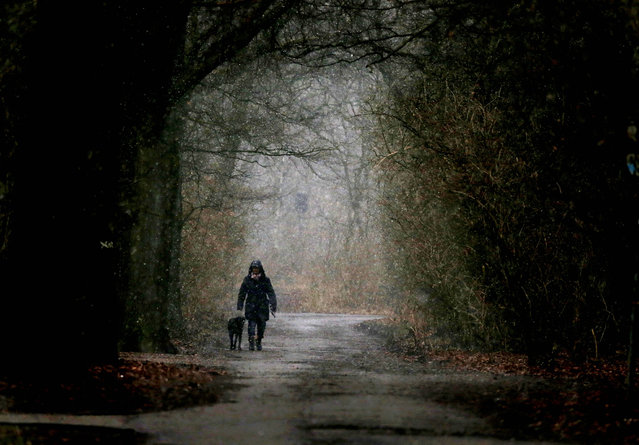 A stroller walks his dog while snow falls at the beginning of spring in Duisburg, Germany, Wednesday, March 20,2013. (Photo by Frank Augstein/AP Photo) 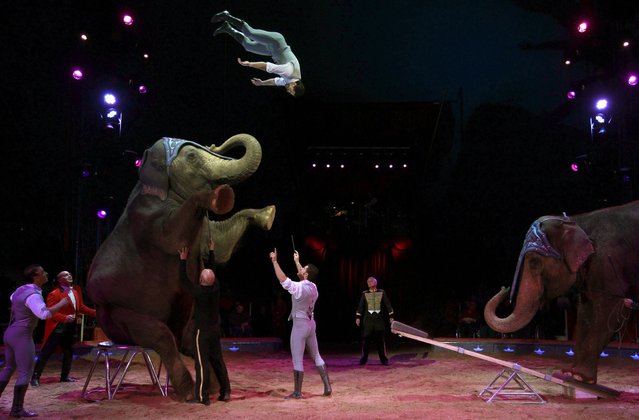 Acrobats perform with elephants during a rehearsal for the new show of Swiss National-Circus Knie in the town of Rapperswil east of Zurich March 21, 2013. Circus Knie starts its nationawide tour 2013 later today. (Photo by Arnd Wiegmann/Reuters) 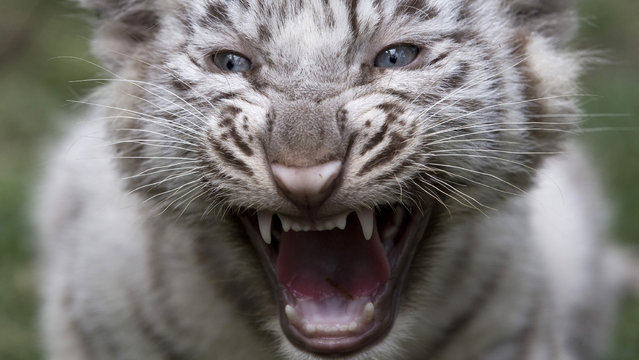 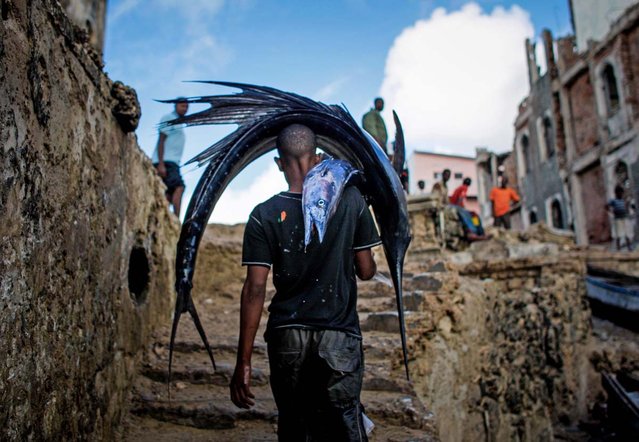 A handout photograph taken taken on March 16, 2013 and released on March 18 by the African Union-United Nations Information Support Team shows a Somali man carrying a large sailfish to the fish market in the Xamar Weyne district of Mogadishu. Every morning Mogadishu's fisherman bring their catch ashore upon which it is quickly unloaded and transported to Xamar Weyne's fish market where it is sold for consumption on the local market and, increasingly, for export to other countries. Over the last two decades, instability on land has greatly restricted the development of the country's fishing industry, but now that Somalia is enjoying the longest period of sustained peace in over 20 years, there is large-scale potential and opportunity to harvest the bountiful waters off the Horn of Africa nation, which boasts the longest coastline in Africa. (Photo by AU-UN IST Photo via AFP Photo) 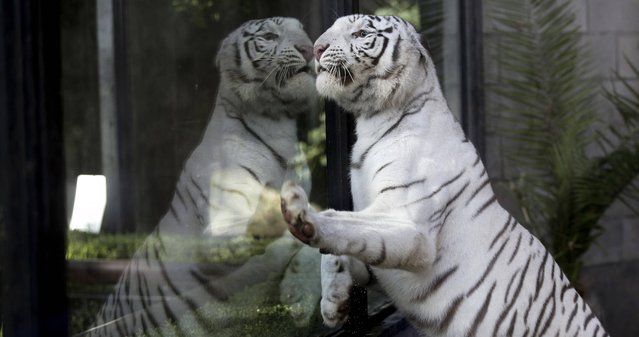 Cleo, a female Bengal white tiger, looks through a window from within her enclosure at the Buenos Aires Zoo in Argentina, Thursday, March 21, 2013. Cleo gave birth to two female and two male cubs on January 14 at the Zoo. (Photo by Natacha Pisarenko/AP Photo) 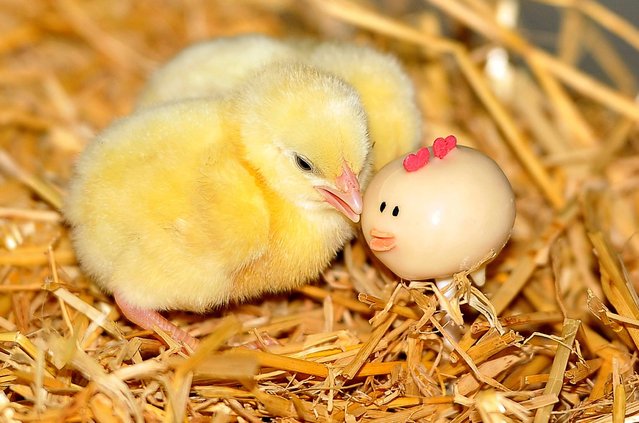 Two just hatched chicks tasting a sweetie chick lollipop treat at the launch of the Balmoral Show in Belfast on March 19, 2013. The Balmoral Show in partnership with Ulster Bank is Ireland's largest Agricultural and Food Show that entertains the whole family. The 145th Show, which will be held at the Maze Prison grounds for the first time, offers its usual extravaganza of colour, competition and showmanship along with daily displays of pedigree horses, ponies, cattle, sheep, poultry, pigs and goats at the new showgrounds, Balmoral Park. (Photo by Justin Kernoghan) 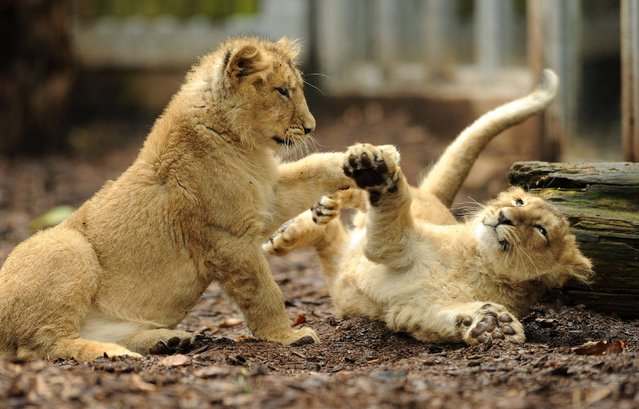 Four-and-a-half month old Asiatic lion cubs Kamran and Ketan play in their new home after being released in their enclosure for the first time for the public to see at Bristol Zoo Gardens, on March 22, 2013. (Photo by Tim Ireland/PA Wire) 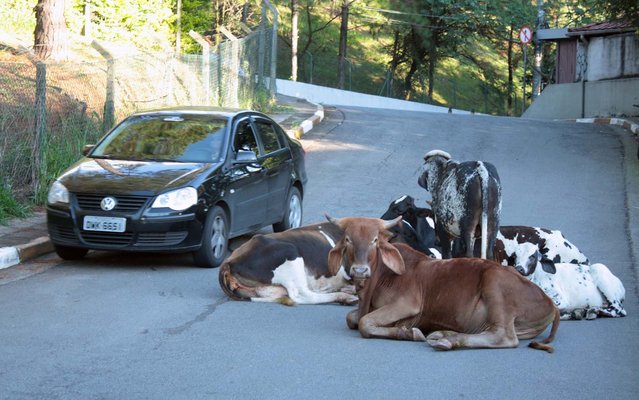 Cows disrupt traffic on Avenida Guido Caloi, in São Paulo, on March 22, 2013. Animals were left for about three hours on the track. (Photo by Luiz Claudio Barbosa/Futura Press/Estadão Conteúdo) 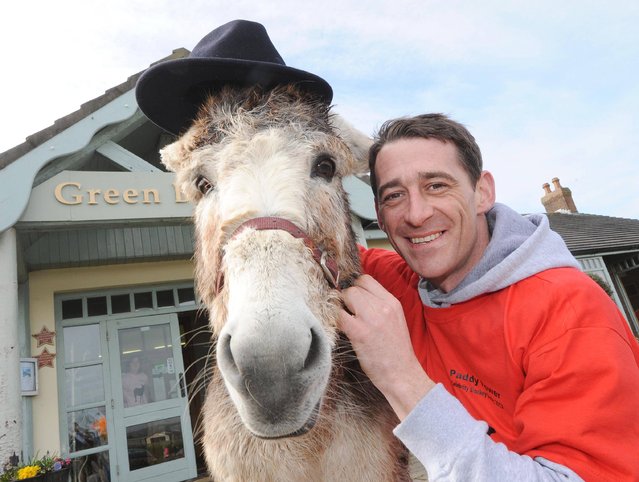 Davy Russell, the Irish champion jockey, with one of the donkeys, Sarkozy Browne, for the Paddy Power Celebrity Donkey Derby in Youghal, March 22, 2013, to raise funds for the Queen of the Sea Festival (July 12th-14th) which in turn will benefit Youghal lifeboat and Childline. (Photo by Denis Minihane) 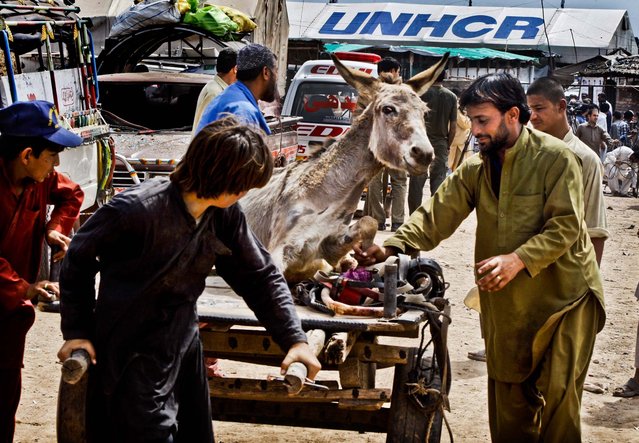 People carry a donkey injured in an explosion at the Jalozai camp outside Peshawar, Pakistan, on March 21, 2013. A car packed with explosives went off in a refugee camp killing and wounding dozens of people. (Photo by Mohammad Sajjad/Associated Press) 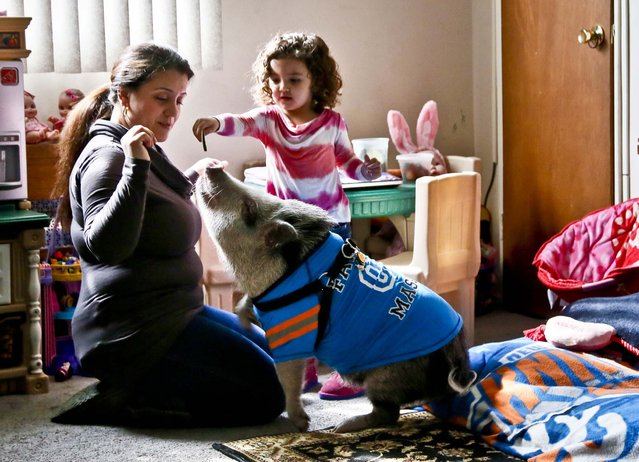 Danielle Forgione and her daughter, Olivia, 3, play with Petey, the family's pet pig, in the Queens borough of New York, on March 21, 2013. Forgione is scrambling to sell her second-floor apartment after a neighbor complained about 1-year-old Petey the pig to the co-op board. In November and December she was issued city animal violations and in January was told by both the city and her management office that she needed to get rid of the pig. (Photo by Bebeto Matthews/Associated Press) 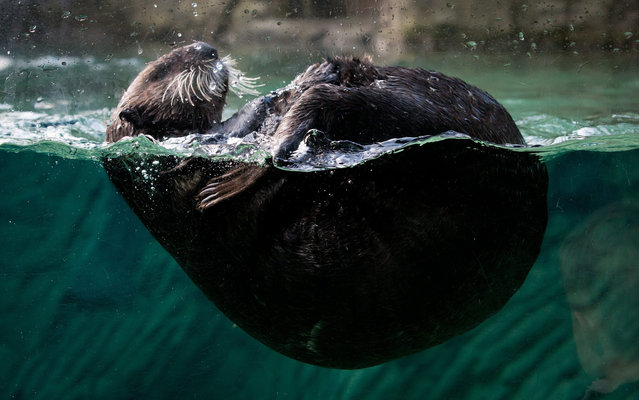 A 7-month-old female sea otter that was found stranded in Alaska swims at the Vancouver Aquarium in Vancouver, British Columbia, on Friday March 22, 2013. The otter was flown to Vancouver this week and unveiled to the public Friday. The aquarium has asked the public to vote on three possible names for the baby otter – Susitna, Katmai or Glacier. (Photo by Darryl Dyck/AP Photo/The Canadian Press) 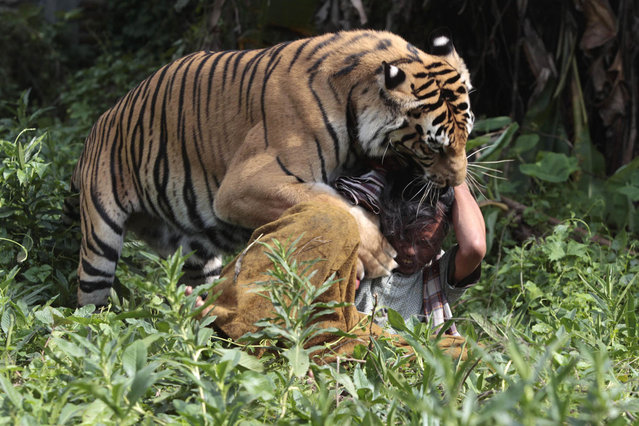 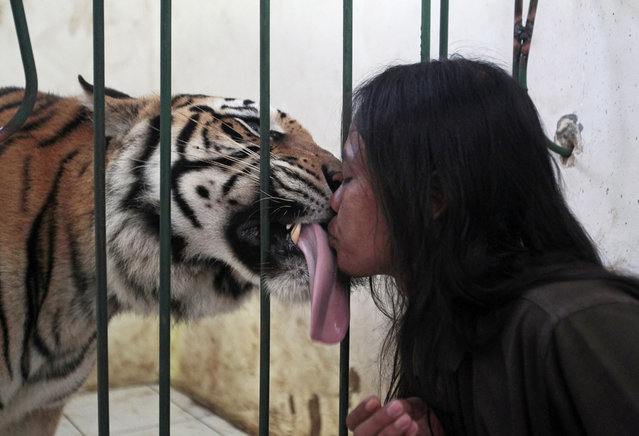 Four-year-old bengal tiger “Mulan Jamila” plays with keeper Soleh at Al Khaffah Islamic school in Malang, Indonesia's East Java province March 19, 2013. The tiger, a gift from a friend, is kept as a pet at the school under a government permit, according to the school. Soleh has fed the tiger 5 kg (11 lbs) of meat per day since the animal was three months old. Picture taken March 19, 2013. (Photo by Sigit Pamungkas/Reuters) 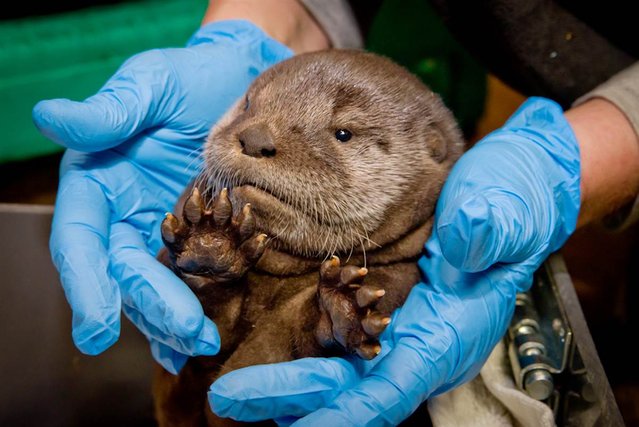 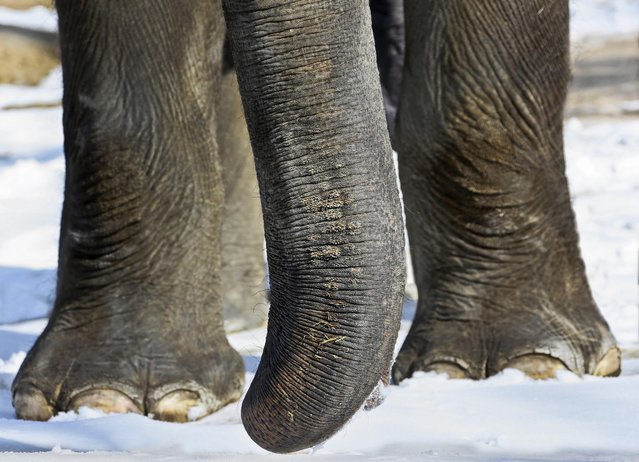 An elephant walks in the snow in the Berlin Zoo, on March 17, 2013. Meteorologists predict the unusual cold and snowy weather to continue in northeastern Germany. (Photo by Stephanie Pilick/Dpa) 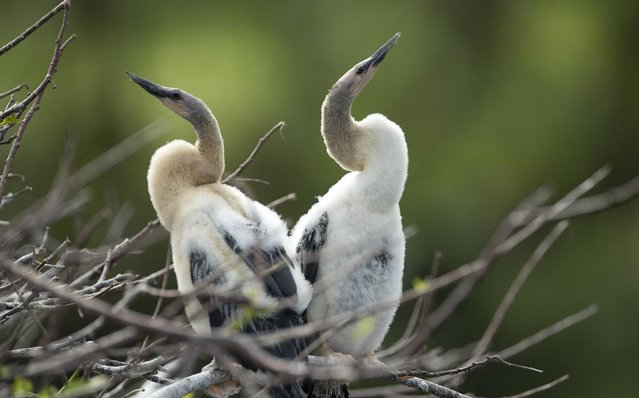 Baby anhingas, a few weeks old, wait for the mature birds to return to their nest with food at the Wakodahatchee Wetlands near Delray Beach, Fla., Sunday, March 17, 2013. (Photo by J. Pat Carter/AP Photo) 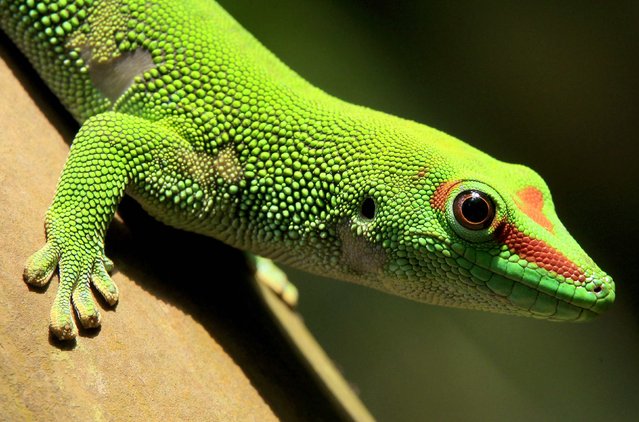