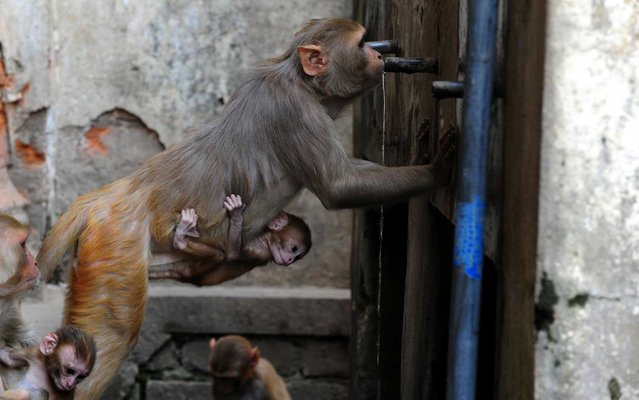 A monkey drank water from a tap in the northern Indian city of Allahabad, Uttar Pradesh, on May 22, 2013. (Photo by Sanjay Kanojia/AFP Photo) 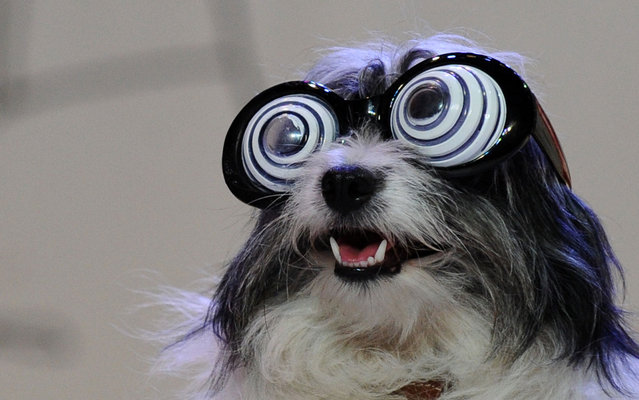 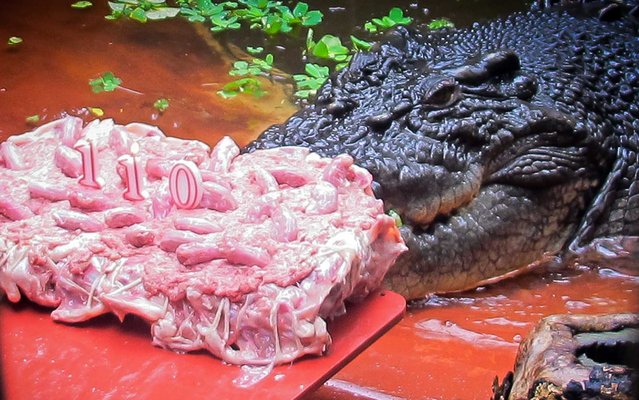 Cassius, the biggest crocodile in the world now, hailing from Australia, celebrated his 110th birthday this week, on May 22, 2013. He was given a cake, especially made with the necks of chicken. The world's largest croc, gobbled away the 20 kg cake garnished with candies along with candles, within a minute. (Photo by Marineland Melanesia/AFP Photo) 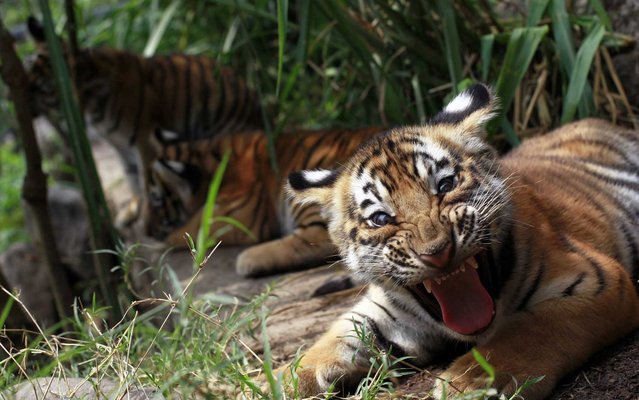 Three two-month old Bengal tiger cubs play in their enclosure at the animal refuge La Fundacion Refugio Salvaje (Furesa) in La Libertad on the outskirts of San Salvador, on May 24, 2013. (Photo by Ulises Rodriguez/Reuters) 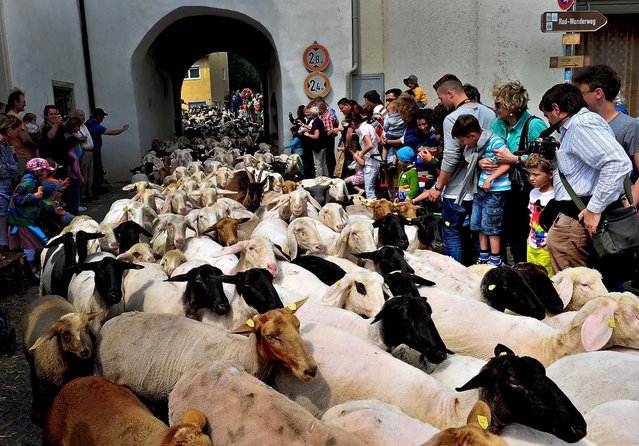 A sheep flock moves over a meadow prior to entering the town of Moernsheim, on May 19, 2013. The annual event in the Altmuehltal region of northern Bavaria, which is know for its lamb production, coincides with Pentecost. (Photo by Lennart Preiss/Getty Images) 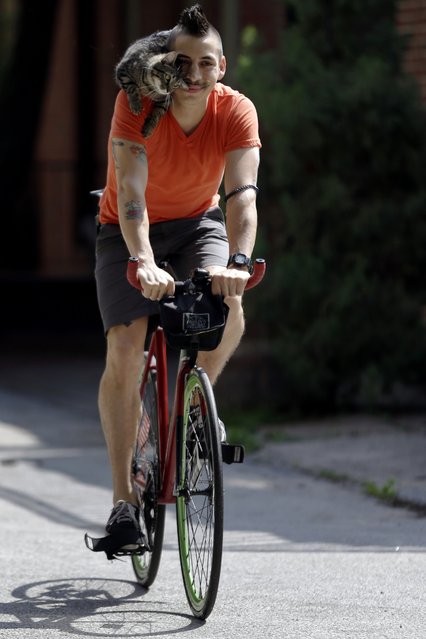 Bicyclist Rudi Saldia and his cat Mary Jane pose for a portrait during an interview with the Associated Press in Philadelphia, on May 23, 2013. Saldia often buzzes around Philadelphia with his year-old feline Mary Jane perched on his shoulder. Their urban adventures have turned heads on the street and garnered big hits on YouTube. (Photo by Matt Rourke/AP Photo) 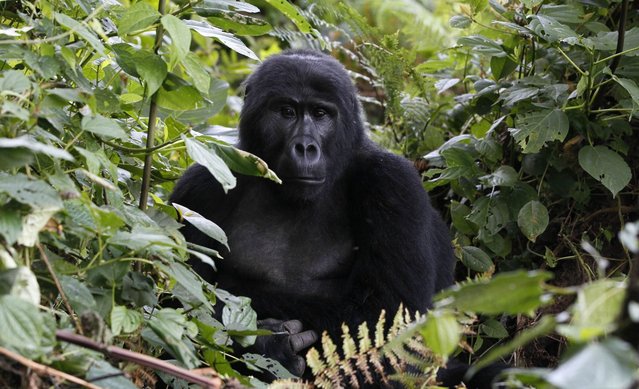 An endangered mountain gorilla from the Bitukura family, rests among vegetation inside a forest in Bwindi Impenetrable National Park in the Ruhija sector of the park, about 550 km (341 miles) west of Uganda's capital Kampala, May 24, 2013. Bwindi Impenetrable Forest borders the Democratic Republic of Congo and Rwanda. The total population of mountain gorillas worldwide is estimated at 880, half of which are to be found in Uganda's Bwindi forest. (Photo by Thomas Mukoya/Reuters) 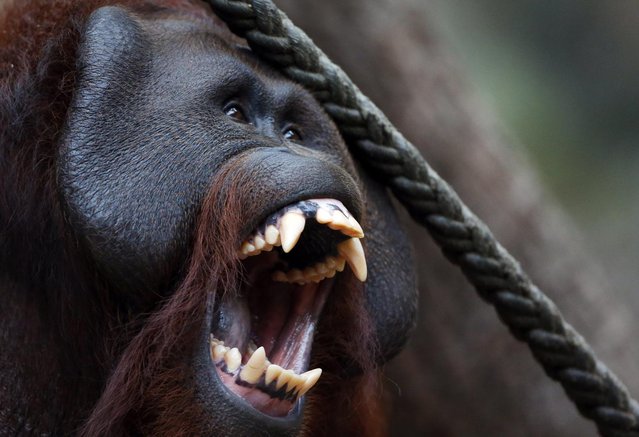 Pongo, a male orangutan, shows his teeth at the Zoo in Muenster, Germany on May 18, 2013. (Photo by Friso Gentsch/AP Photo) 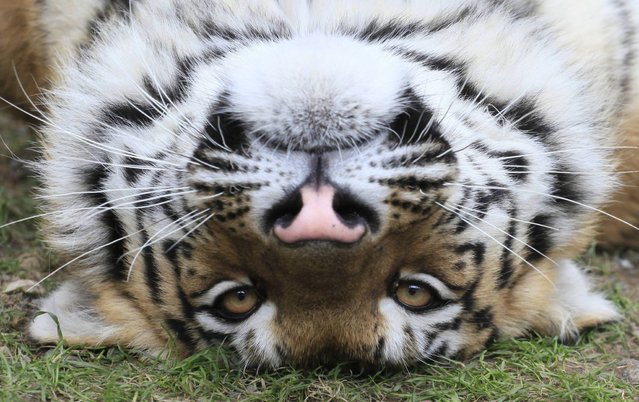 Bartek, a one-year-old male Amur tiger, looks out from an open-air cage at the Royev Ruchey zoo on the suburbs of Russia's Siberian city of Krasnoyarsk, May 18, 2013. (Photo by Ilya Naymushin/Reuters) 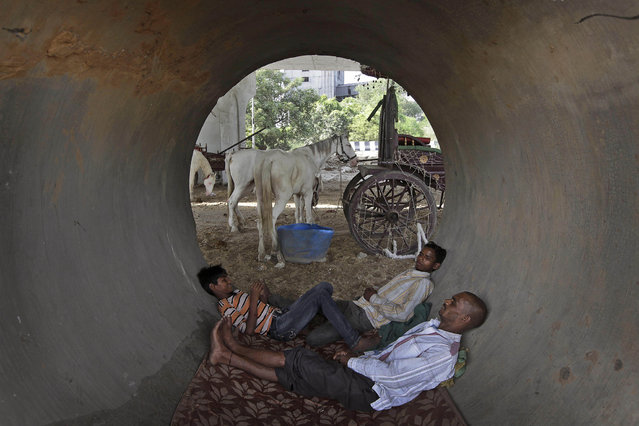 Indian horse cart owners sleep inside a concrete pipe under a flyover, as their horses feed on a hot afternoon in New Delhi, India , Friday, May 24, 2013. The capital city has been reeling under a heat wave with temperature crossing 45 degree Celsius (113 degree Fahrenheit) on Friday. (Photo by Manish Swarup/AP Photo) 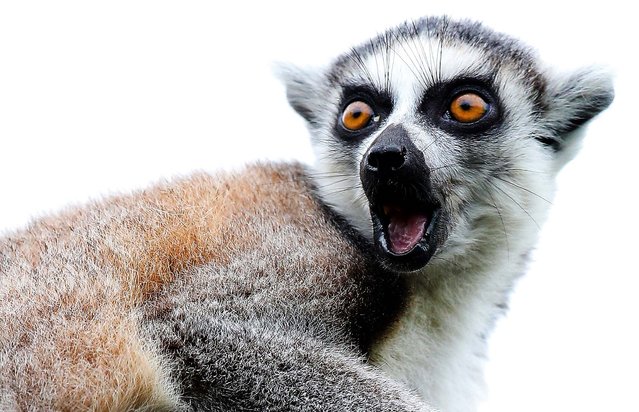 A ring-tailed lemur waits to be fed in its enclosure at Bristol Zoo Gardens in Bristol, England, on May 22, 2013. The two-week old lemur called Rascal is one of a number of baby animals, birds and reptiles that have been born at Bristol Zoo Gardens now that spring has finally sprung. (Photo by Matt Cardy/Getty Images) 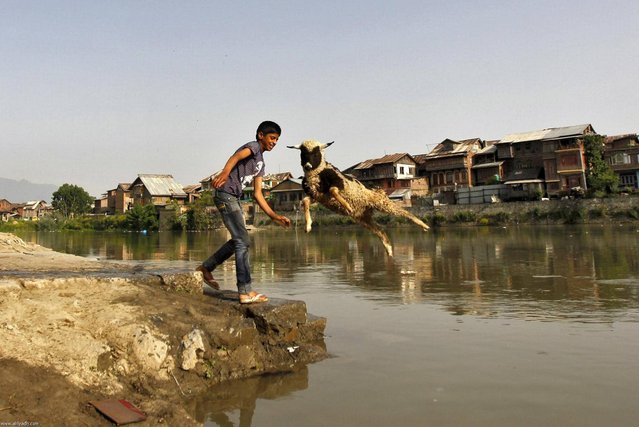 A boy throws a sheep into the waters of Jhelum river to wash it, in Srinagar May 20, 2013. (Photo by Danish Ismail/Reuters)

National Park rangers carry a live python during Zimbabwe's first ever Carnival in Harare, on May 25, 2013. (Photo by Tsvangirayi Mukwazhi/Associated Press) 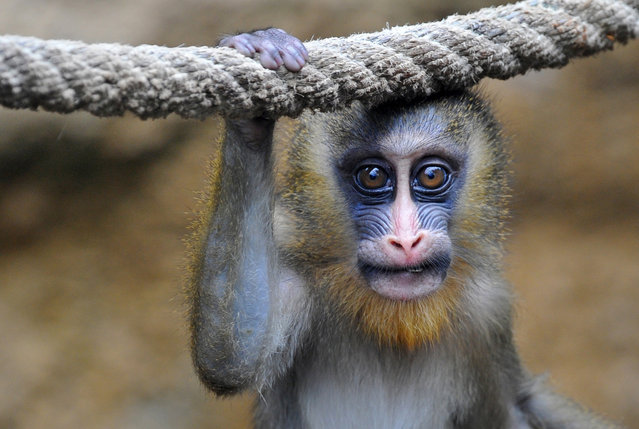 A young Mandrill named “Tacari” is seen in its enclosure at the zoo in Dresden, eastern Germany, on May 23, 2013. (Photo by Matthias Hiekel/Getty Images) 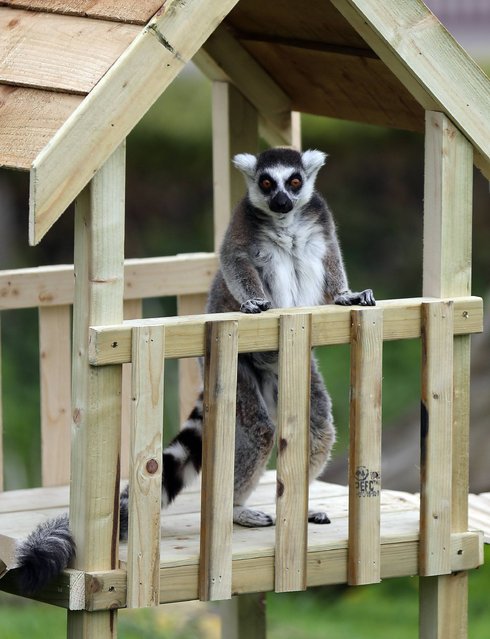 A ring tailed Lemur gets to grips with a new slide and climbing frame installed in it's enclosure at Whipsnade Zoo in Bedfordshire, on May 22, 2013. The new installation comes as ZSL Whipsnade Zoo prepares to launch its brand new children's adventure play area “Hullabazoo” that has been designed around animal movement and opens to the public on Saturday. Photo by Chris Radburn/PA Wire) 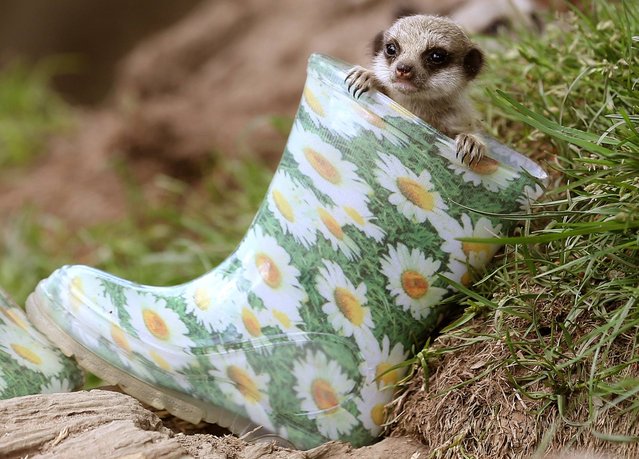 Four week old meerkat cub Monty in his enclosure at Blair Drummond Safari Park as they make their public debut, on May 23, 2013. (Photo by Andrew Milligan/PA Wire) 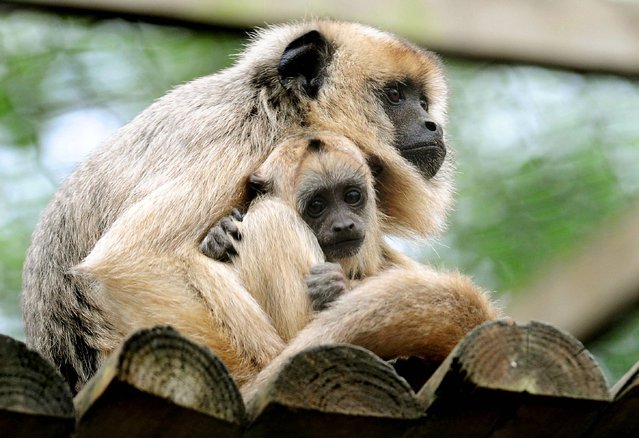 Twelve week-old Black and Gold Howler monkey, Donatello with its mother Lottie at Twycross Zoo, Warwickshire, on May 22, 2013. Donatello is the latest addition to Twycross Zoo's large family group of Howlers. (Photo by Rui Vieira/PA Wire) 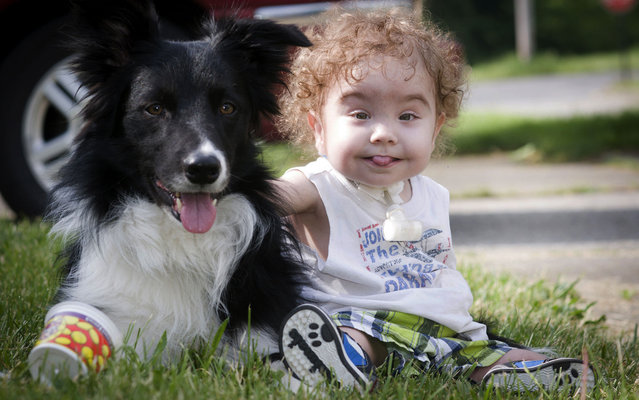 Kaiba Gionfriddo plays with Bandit, the family dog, outside his Youngstown, Ohio, home, on May 23, 2013. (Photo by Mark Stahl/AP Photo) 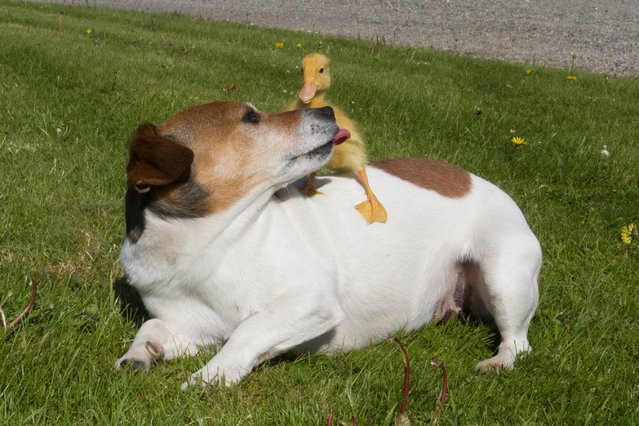 A orphaned duckling on a farm in Rathdangan, Co.Wicklowgets a wash from foster mother Tiny enjoying the weekend sunshine, on May 20, 2013. (Photo by Michael Kelly) 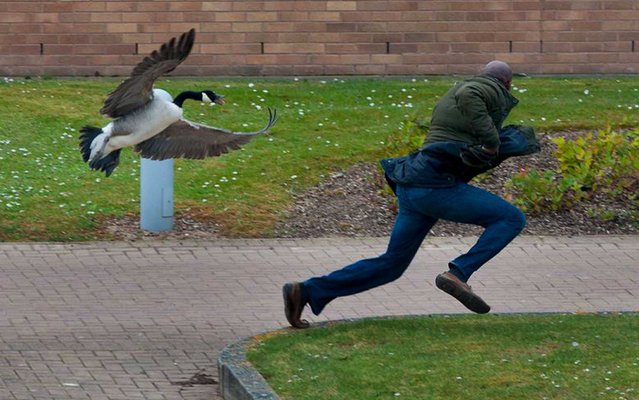 A goose has terrorized students at the University of Warwick, Coventry, UK, on May 22, 2013. The bird built its nest near a block of student apartments and attacks anyone who goes near the nest. (Photo by Caters News/The Grosby Group) 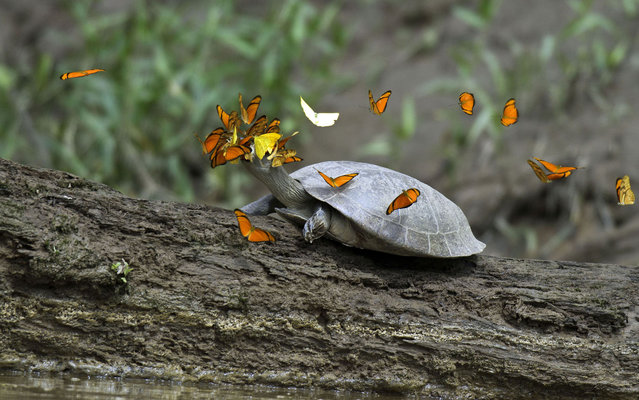 Butterflies fight for space to drink the tears of a turtle species known as tracajá in the Peruvian Amazon (WTF??? – AvaxNews). (Photo by Caters News/The Grosby Group) 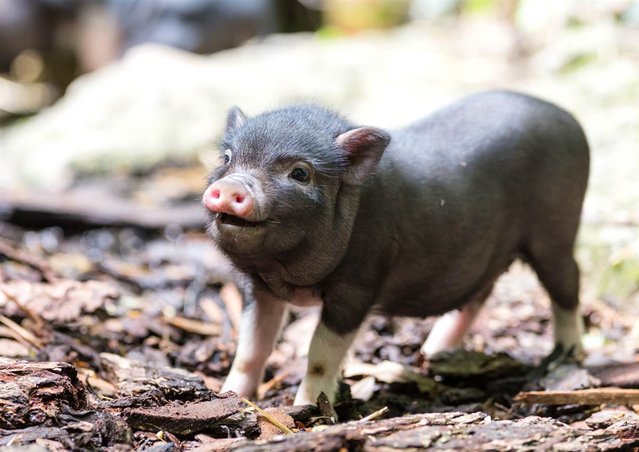 One of eight miniature pigs, born to parents Jack and Jill, runs around at Switzerland’s Zoo Basel in this photo released on May 21, 2013. (Photo by Zoo Basel) 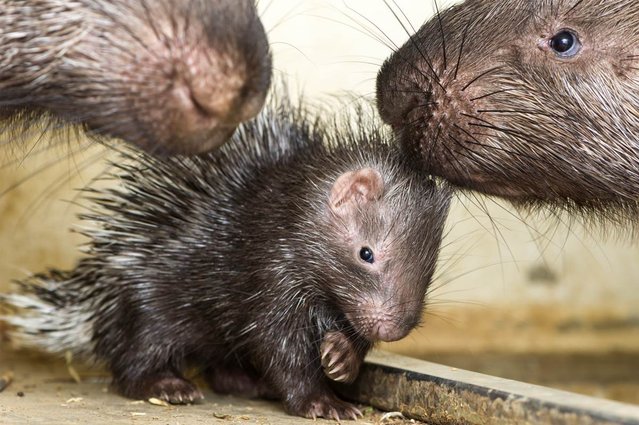 A male baby porcupine is looked after by its parents at Switzerland's Zoo Basel in this photo released on May 21, 2013. The baby was born on April 6. (Photo by Zoo Basel) 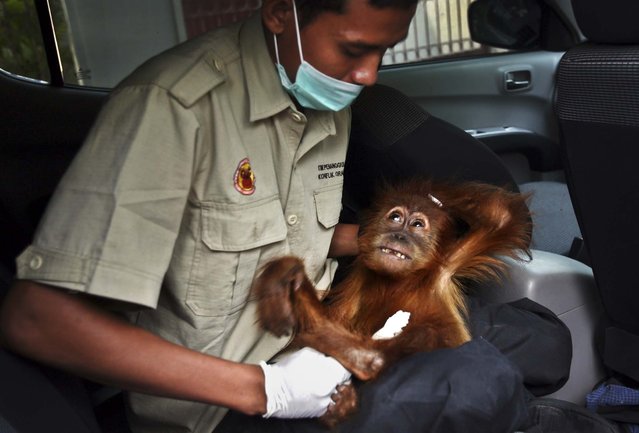 An officer holds an 18 month-old orangutan after it was confiscated from an illegal owner in Medan, North Sumatra, Indonesia, on May 24, 2013. Orangutan populations in Indonesia's Borneo and Sumatra island are facing severe threats from habitat loss, illegal logging, fires and poaching. Conservationists predicted that without immediate action, orangutans are likely to be the first great ape to become extinct in the wild. (Photo by Binsar Bakkara/Associated Press) 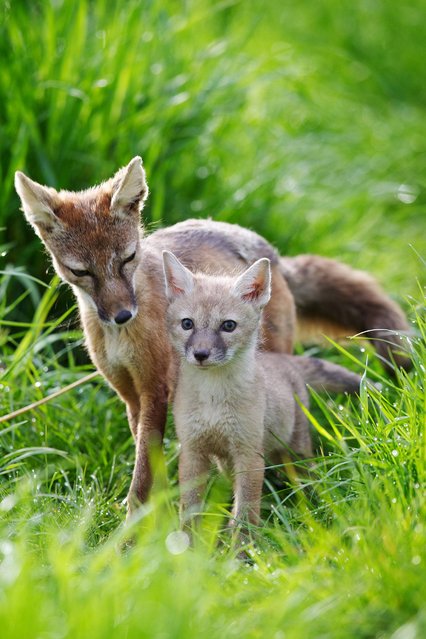 Pictured are Tayto Parks newest arrivals, Corsac Fox cubs (7 born early-May) and Eurasin Lynx kittens (3 born 7 days ago), on May 22, 2013. The new additions to Tayto Park are happily getting used to their new home which also houses a large variety of rare and endangered species for Tayto Park visitors to see. (Photo by Patrick Bolger) 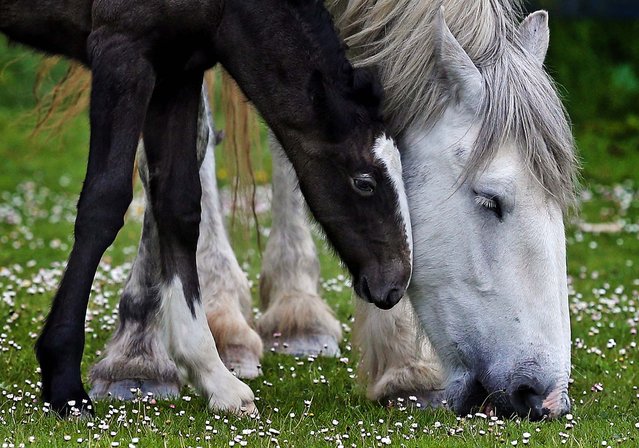 A week old shire horse foal rubs against her mother at Cornwall's Crealy Adventure Park, near Wadebridge, England, on May 24, 2013. Once a common sight in the UK, shire horses are now classed as “at risk” by the Rare Breed Survival Trust. The yet-to-be-named filly foal, bred in a breeding program by the adventure park as part of a endangered species prototection project, will be one of fewer than 300 predicted to be born in England this year. (Photo by Matt Cardy/Getty Images) 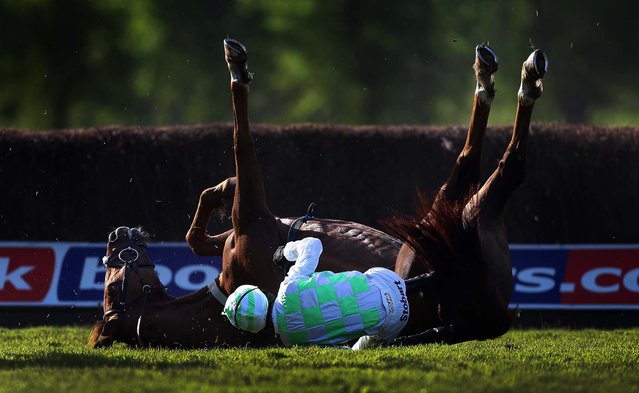 Like A Rolling Stone, ridden by Mark Grant, falls during a Beginners' Steeple Chase at Worcester Racecourse in England, on May 22, 2013. (Photo by David Davies/PA)
Edit Del
26 May 2013 13:01:00, post received 0 comments
Publication archive:
←   →
Popular tags:
All tags
Last searches: