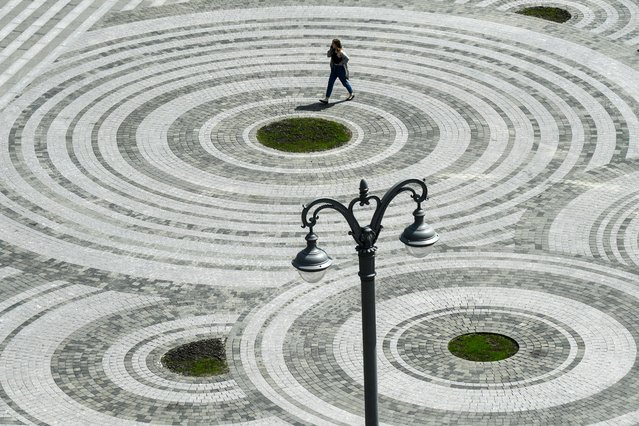 A woman speaks on her smartphone as she walks on Lubyanskaya square during a sunny day in downtown Moscow on May 20, 2019. (Photo by Kirill Kudryavtsev/AFP Photo) 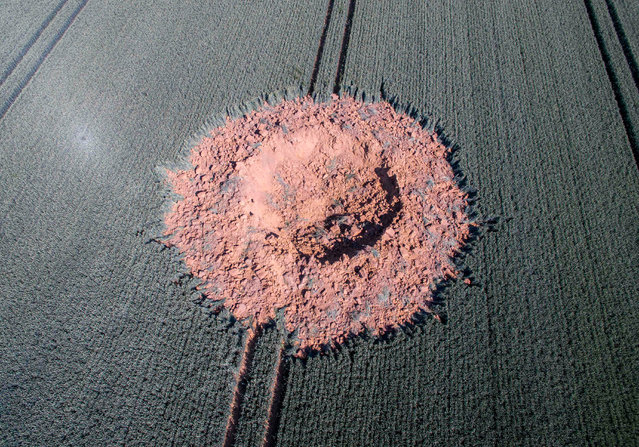 An aerial view shows a crater on a barley field near Ahlbach, Germany on June 24, 2019. Experts assume that an air bomb of the WWII probably exploded at a depth of several metres as a result of the triggering of the chemical detonator. (Photo by Boris Roessler/dpa/AFP Photo) 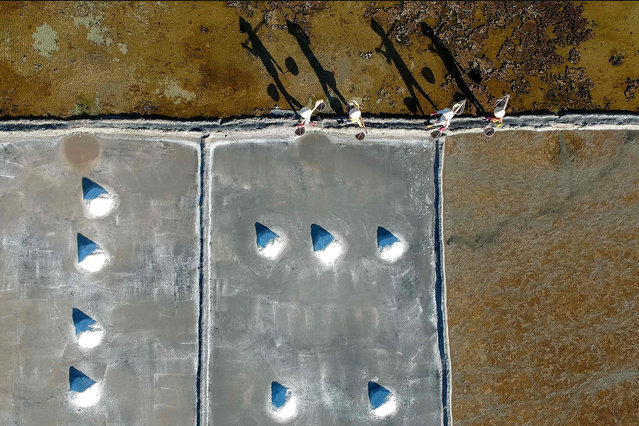 This aerial photograph taken on April 22, 2019 shows labourers working in southern Vietnam's Hon Khoi salt fields. The salt farmers of Hon Khoi rise before dawn as they have for generations, fanning out across shallow seawater pools to harvest the precious mineral, hoping for a better season than the last. (Photo by Manan Vatsyayana/AFP Photo) 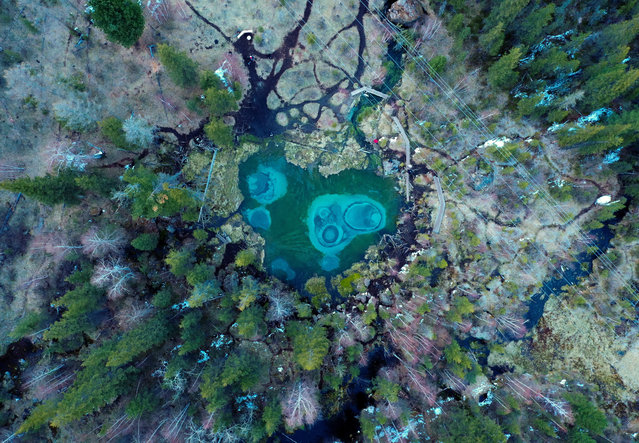 A view of Blue Geyser Lake near the village of Aktash in the Ulagan District, Altai Republic, Russia on June 3, 2019. (Photo by Yuri Smityuk/TASS) 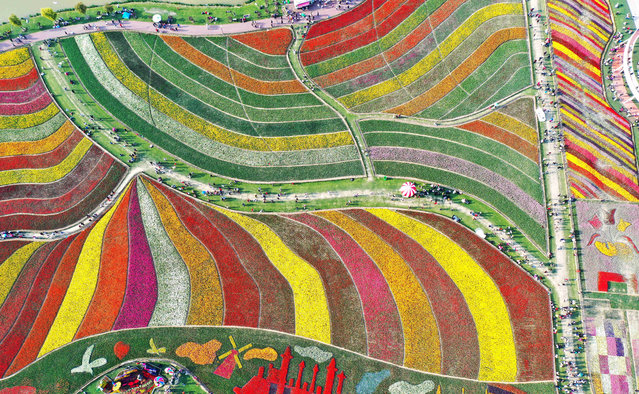 Aerial view of tourists enjoying over 3,000 tulips at a scenic area on the second day of Qingming Festival holiday on April 6, 2019 in Yancheng, Jiangsu Province of China. The Qingming Festival, also known as Tomb-Sweeping Day, fell on April 5 this year. (Photo by Yang Suping/VCG via Getty Images) 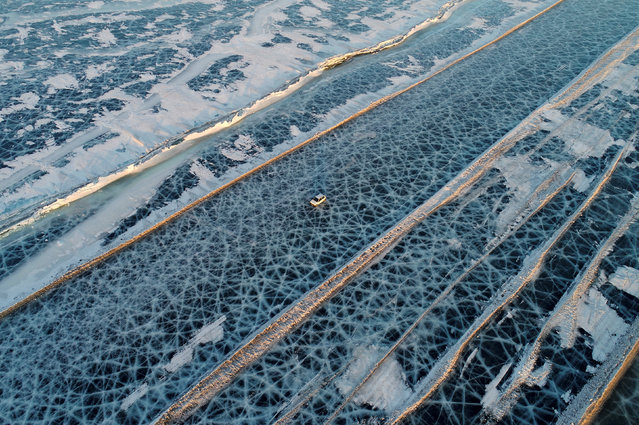 A car drives along a five-kilometre-long road, which is supervised by regional traffic services to connect the banks of the ice-covered Yenisei River during winter season, south of Krasnoyarsk, Russia March 3, 2019. (Photo by Ilya Naymushin/Reuters) 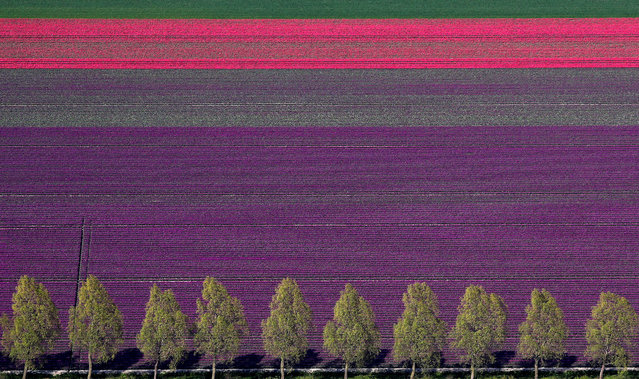 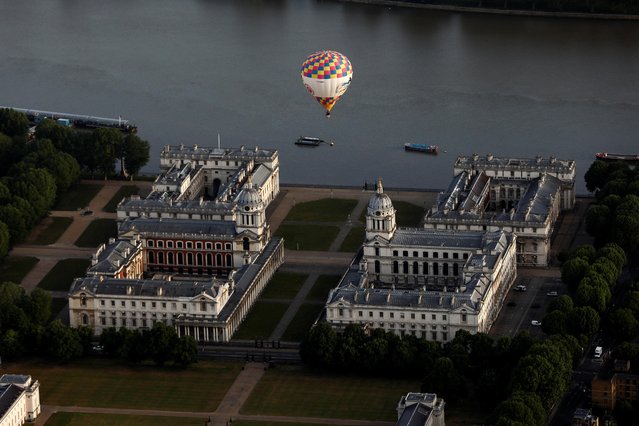 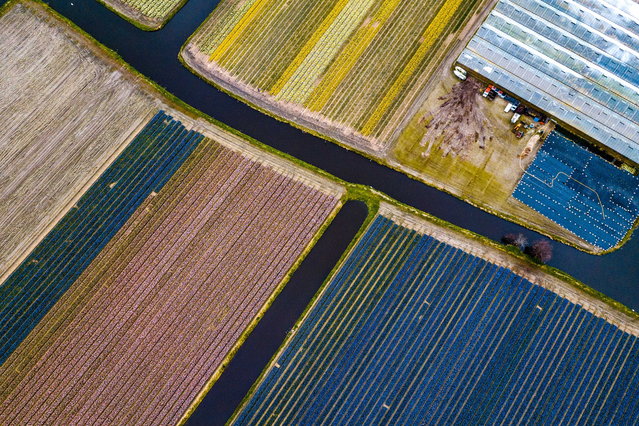 A photo taken with a drone shows flower fields near Lisse, The Netherlands on April 6, 2019. The flowers attract many tourists from home and abroad every year. (Photo by Rob Engelaar/EPA/EFE) 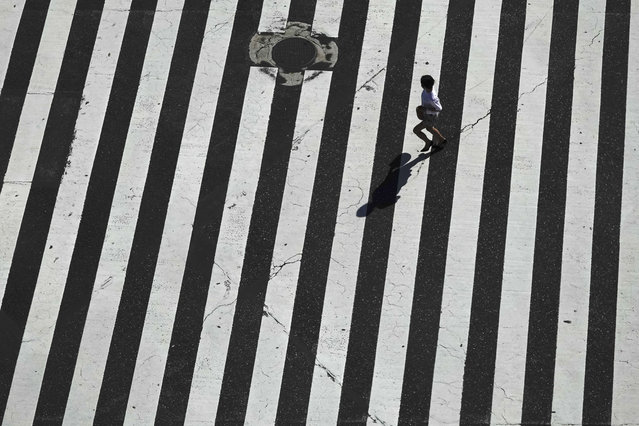 A woman runs across the famous Shibuya crossing Thursday, June 13, 2019, in Tokyo. It's not just a crossing. Located just outside Shibuya Station, the scramble crossing is one of the top tourist attractions in Japan. It's so famous that there's an observation deck on the rooftop of a building built to watch the crossing. During rush hours, an estimated 1000 to 2500 people cross the intersection during each traffic light change. (Photo by Jae C. Hong/AP Photo) 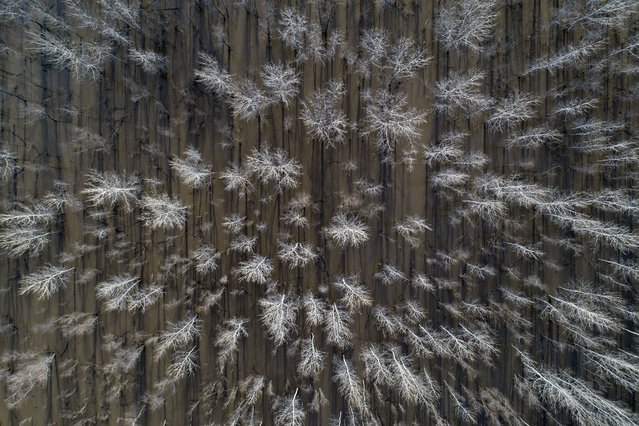 Floodwaters cover the ground below a grove of trees in this aerial photograph over Sidney, Iowa, U.S., on Friday, March 22, 2019. The deluge that devastated so much of the Midwest over the last week could be a preview for one of the worst years for flooding in the U.S., according to federal weather officials. (Photo by Daniel Acker/Bloomberg) 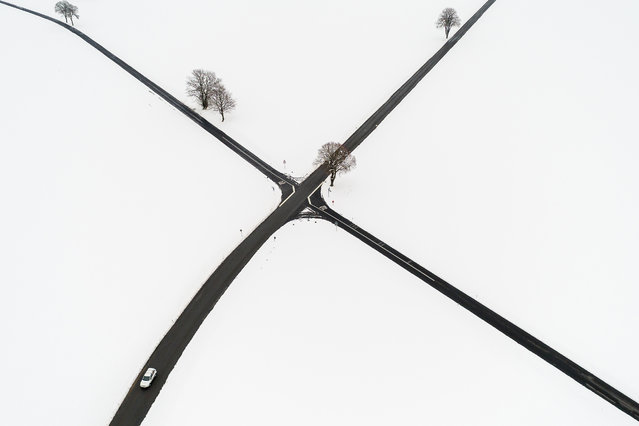 This aerial view taken on April 4, 2019 shows a car making its way next to a freshly snow-covered landscape field near Sottens, western Switzerland. (Photo by Fabrice Coffrini/AFP Photo) 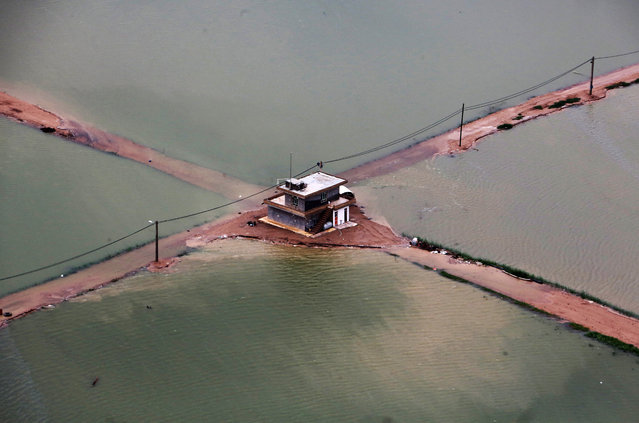 A general view shows the flooded Azadeghan plain in the village of Susangerd in Iran's Khuzestan province on April 09, 2019. Iranian authorities yesterday evacuated patients from a hospital threatened by floodwaters in the southwestern city of Ahvaz, the semi-official news agency ISNA reported. Iran has been hit by several weeks of unprecedented flooding across most of the usually arid country that has killed 70 people, according to the emergency services. (Photo by Atta Kenare/AFP Photo) 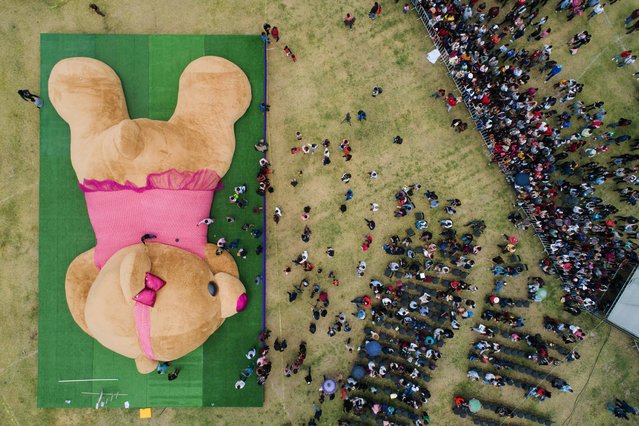 In this aereal view officials measure a teddy bear measuring more than 20 meters long and 4 tons of weight, which entered the Guiness Book of World Records as the biggest of its kind on April 28, 2019 in Xonacatlan, Mexico state. (Photo by Mario Vazquez/AFP Photo) 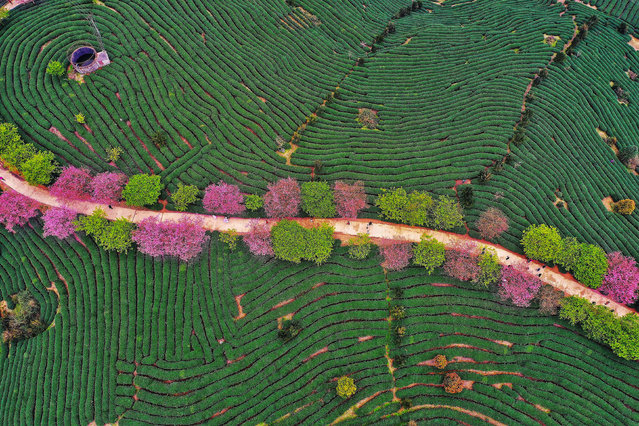 This photo taken on February 26, 2019 shows an aerial view of a tea field in Zhangping in China's eastern Fujian province. (Photo by AFP Photo/China Stringer Network) 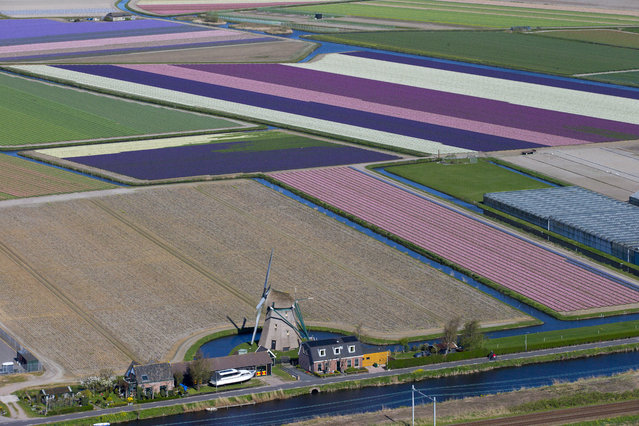 Aerial view of a windmill and flower fields surrounding Keukenhof spring park in Lisse, near Amsterdam, Netherlands, Wednesday, April 10, 2019. For years, the Dutch agriculture, horticulture and logistics industries have been refined to swiftly deliver their produce to customers in the United Kingdom. A so-called “hard” Brexit could seriously impact the supply chain with delays expected at British and European ports if Britain leaves the EU without a deal. (Photo by Peter Dejong/AP Photo) 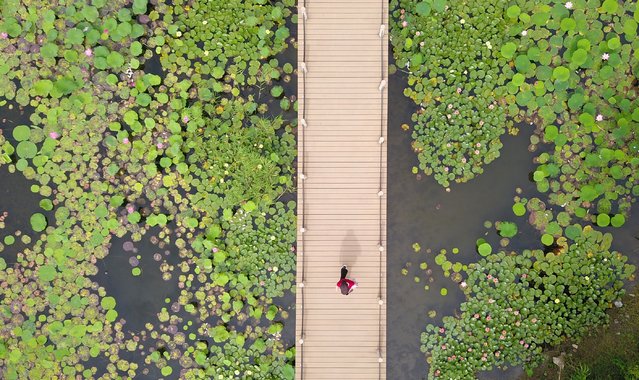 This aerial image shows a visitor (C) viewing lotus plants from a walkway at the Sanwan scenic area beside the ancient canal in Yangzhou, in China's eastern Jiangsu Province on June 17, 2019. (Photo by AFP Photo/Stringer) 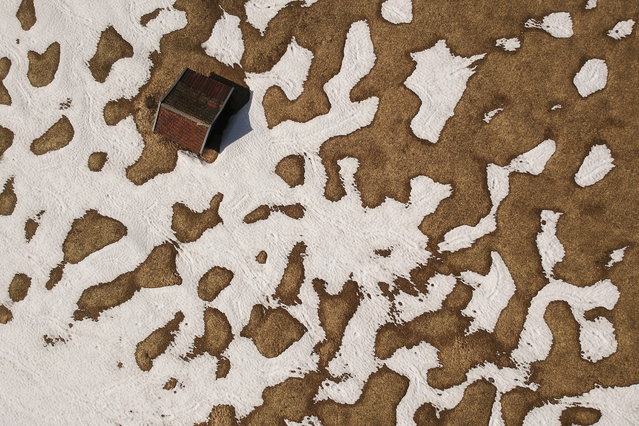 An aerial picture taken with a drone shows a barn between patches of melting snow on a meadow near Gerold, Germany, 02 April 2019. (Photo by Philipp Guelland/EPA/EFE) 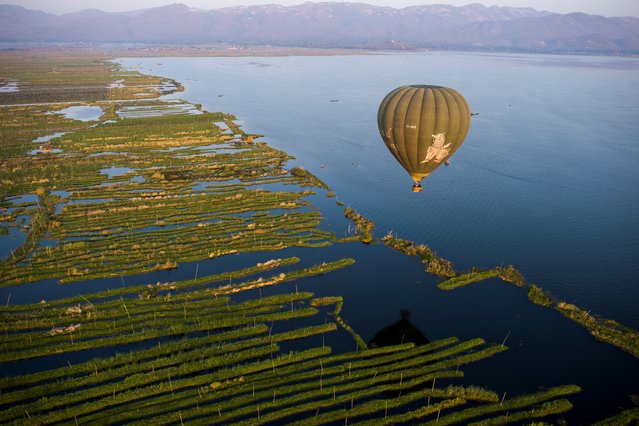 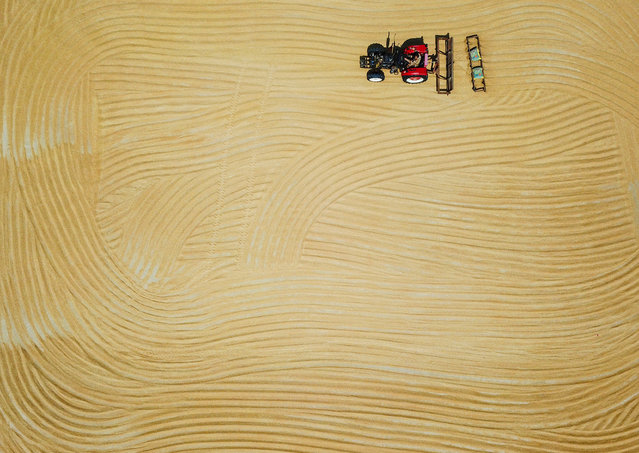