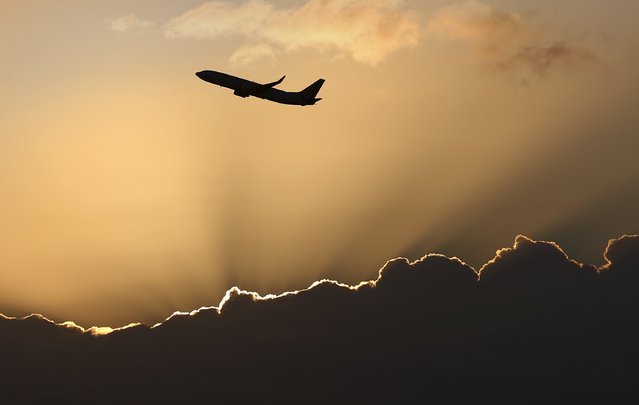 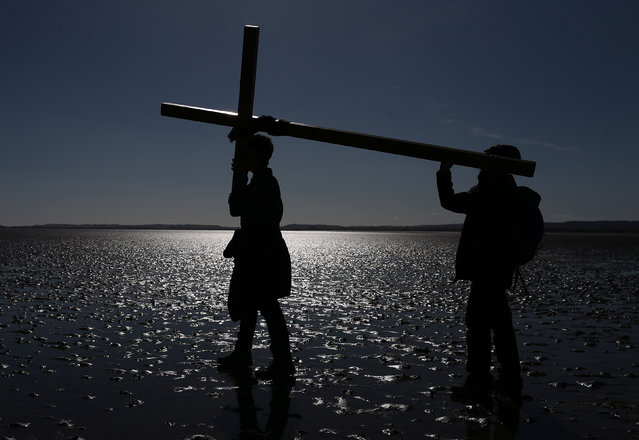 Pilgrims walk across a tidal causeway while carrying a cross during the final leg of the Northern Cross pilgrimage to Holy Island in Northumbria, Britain, March 25, 2016. For forty one years Christians have taken part in the pilgrimage to Holy Island, walking through Northumberland and the Scottish Borders, during Holy Week. (Photo by Nigel Roddis/EPA) 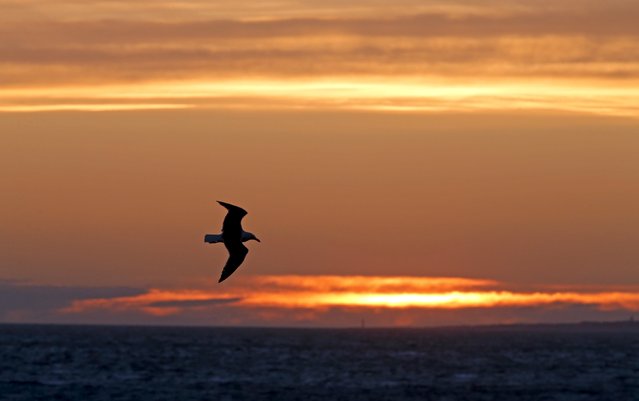 A seagull flies at sunset in Marseille, France, April 7, 2016. (Photo by Jean-Paul Pelissier/Reuters) 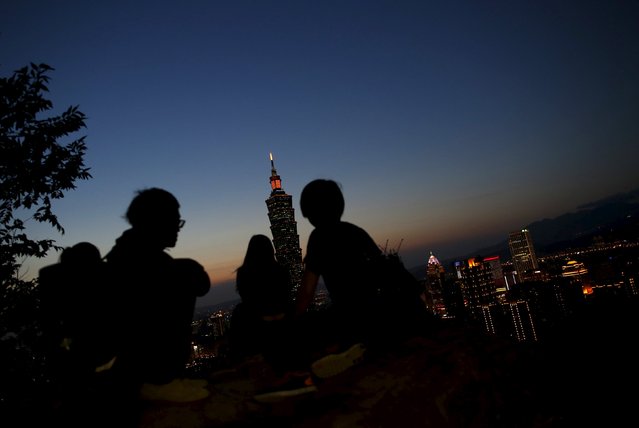 People react on the top of a rock as Taiwan's landmark building is seen during sunset in Taipei, Taiwan April 19, 2016. (Photo by Tyrone Siu/Reuters) 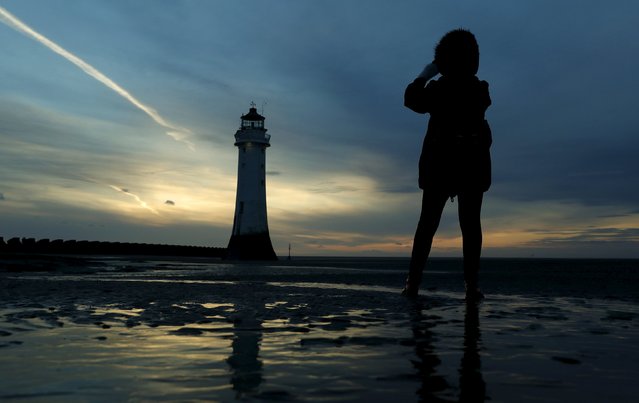 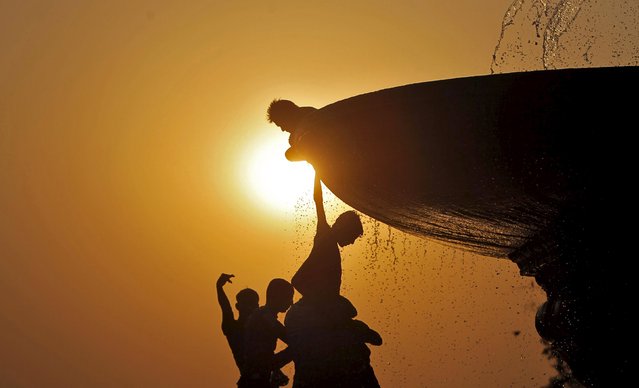 Boys cool off under a water fountain on a hot summer evening in New Delhi, India, April 25, 2016. (Photo by Anindito Mukherjee/Reuters) 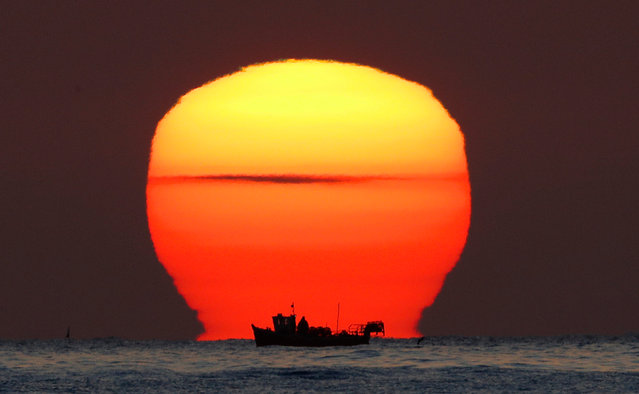 A lobster fisherman checks his pots as the sun rises over his small fishing boat in the North Sea near Whitley Bay in Northumberland, England on April 20, 2016. (Photo: Owen Humphreys/PA Wire/ZUMA Press) 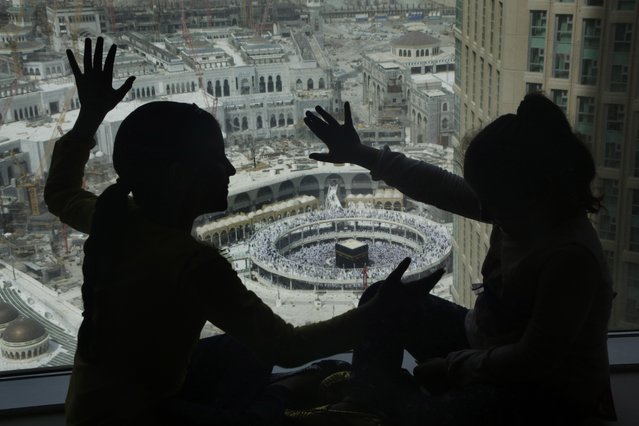 Children play at the glass windows of a hotel overlooking the Grand Mosque, in the Muslim holy city of Mecca, Saudi Arabia, Friday, March 11, 2016. (Photo by Amr Nabil/AP Photo) 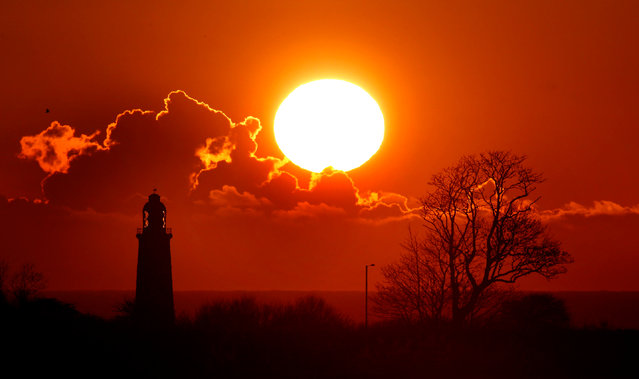 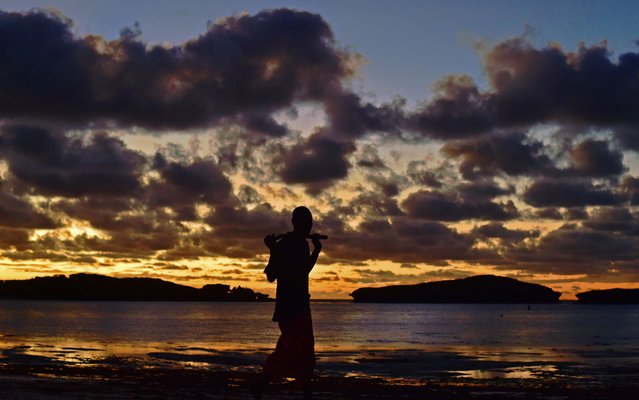 A man walks along Watamu beach, Kenya at sunrise on May 2, 2016. (Photo by Carl De Souza/AFP Photo) 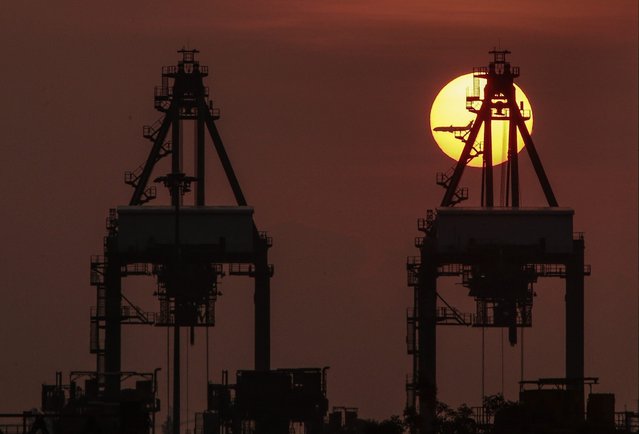 A plane flies past the rising sun at dawn, behind two container cranes at the port of Singapore, 17 March 2016. (Photo by Wallace Woon/EPA) 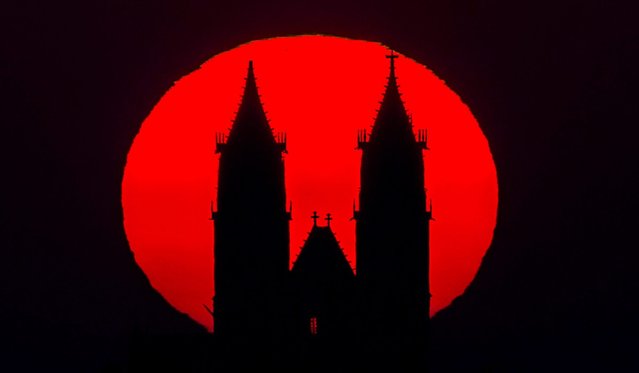 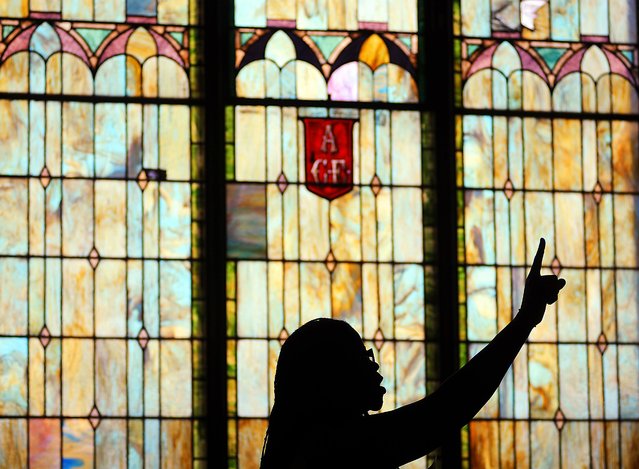 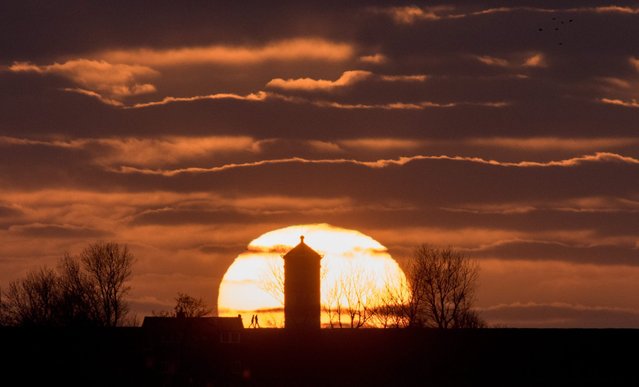 A picture made available on 21 April 2016 shows the Sun setting behind the Pilsum Lighthouse in Pilsum, Germany, 20 April 2016. (Photo by Matthias Balk/EPA) Fire crews battle a blaze in the Phoenix suburb of Gilbert, Ariz., Saturday, April 23, 2016. Evacuations have been ordered for homes near the major fire. (Photo by Cheryl Evans/The Arizona Republic via AP Photo) 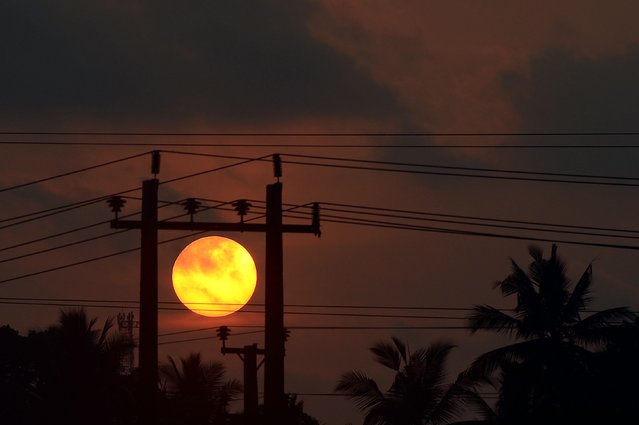 The sun sets behind the electricity wires in Colombo on March 14, 2016. (Photo by Lakruwan Wanniarachchi/AFP Photo) 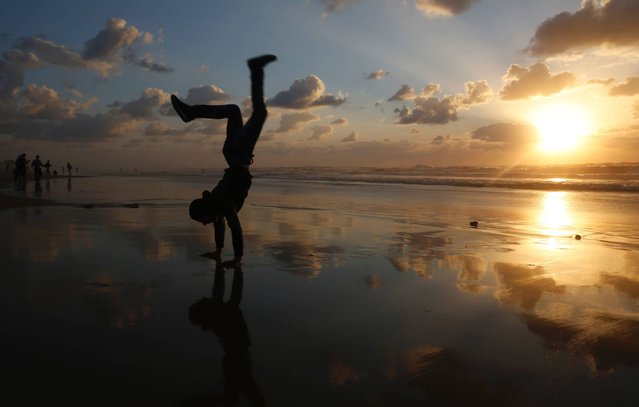 A Palestinian youth plays as the sun sets at the beach in Gaza City on March 29, 2016. (Photo by Mohammed Abed/AFP Photo) 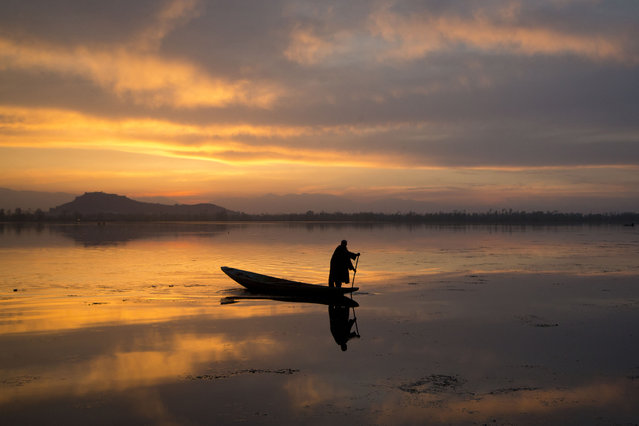 A Kashmiri fisherman rows his Shikara, or traditional boat, during sunset at the Dal Lake in Srinagar, Indian controlled Kashmir, Tuesday, March 29, 2016. Nestled in the Himalayan mountains and known for its beautiful lakes and saucer-shaped valleys, the Indian portion of Kashmir, is also one of the most militarized places on earth. (Photo by Dar Yasin/AP Photo) 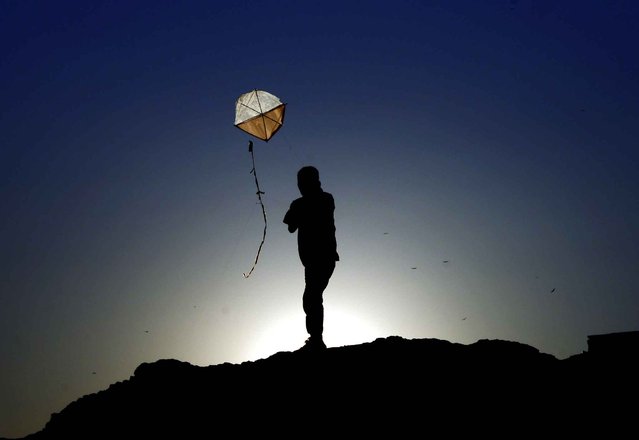 Children fly a kite before the procession for the Passion of Jesus Christ on Good Friday in the low-income neighbourhood of Petare in Caracas, Venezuela on March 25, 2016. (Photo by Juan Barreto/AFP Photo) 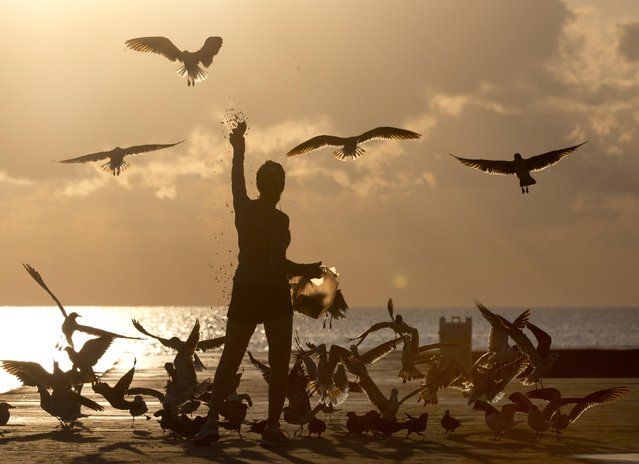 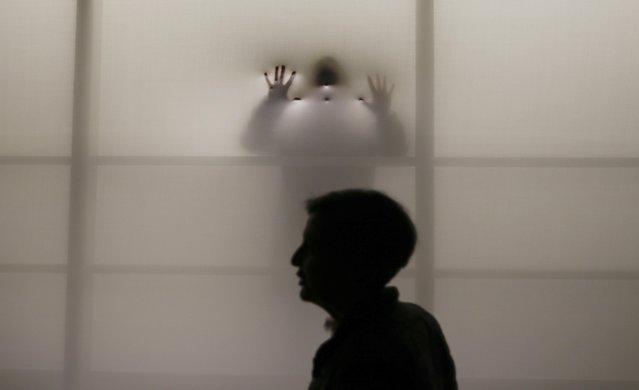 A woman touches a wall made by elastic fabric, part of the artistic installation “ Sidewalk”' by Colombian architect Giancarlo Mazzanti, at the “ Architecture as Art”' exhibition at the Hangar Bicocca, in Milan, Italy, Friday, April 8, 2016. (Photo by Luca Bruno/AP Photo) 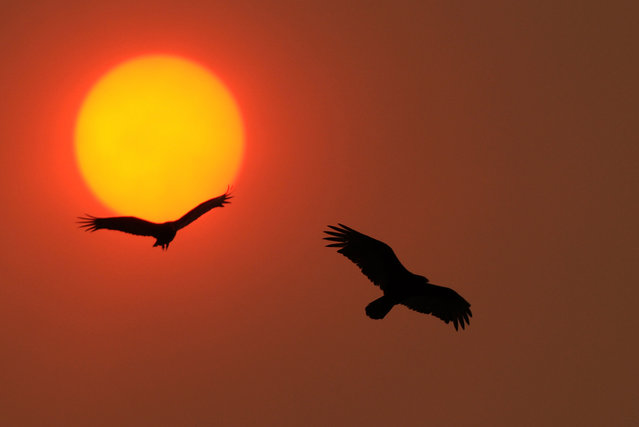 In this March 23, 2016 photo, birds fly over Salina, Kan. The sky was filled with smoke from a fire in Oklahoma that spread into Kansas. (Photo by Tom Dorsey/Salina Journal via AP Images) Storks sit on their nest at sun rise near the village of Vereskovo, west of Minsk, Belarus, early Sunday, April 3, 2016 as the temperatures dropped to 0 C (32 F) on this morning. Storks are favorite birds in Belarus and people welcome when birds settle near their houses. (Photo by Sergei Grits/AP Photo)
Edit Del
04 May 2016 12:01:00, post received 0 comments
Publication archive:
←   →
Popular tags:
All tags
Last searches: