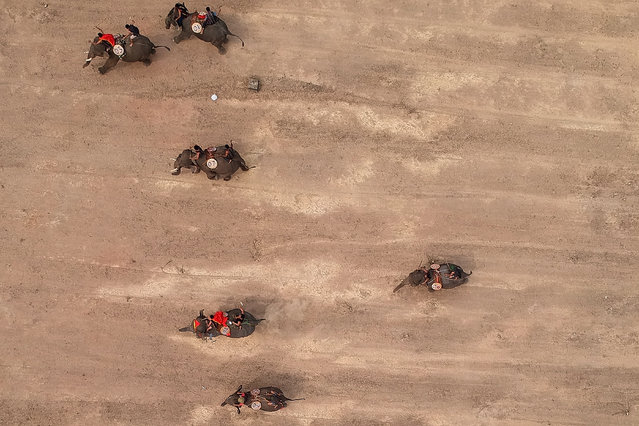 This aerial photograph shows mahouts racing their elephants during the Buon Don elephant festival in Vietnam's central highlands of Dak Lak province on March 12, 2019. Locals say the race is a celebration of the much revered animals – traditionally thought of as family members in this part of Vietnam – but conservation groups are calling for an end to the festival, which they say is cruel and outdated. (Photo by Manan Vatsyayana/AFP Photo) 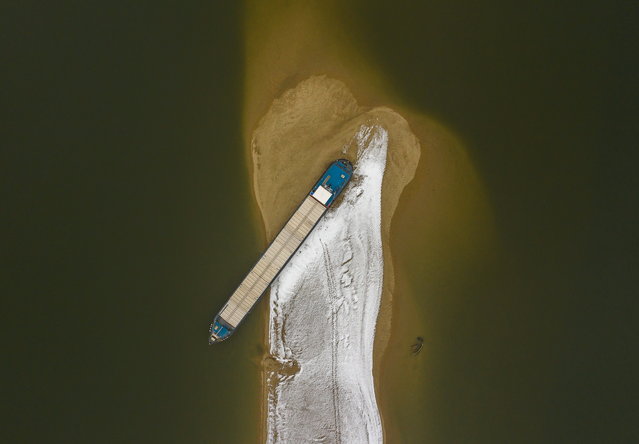 A photo taken by a drone shows the Romanian cargo ship Jess sitting aground on a sandbank on River Danube between the Helemba island and Szob, Hungary, 30 January 2019. The vessel ran aground on 17 January. (Photo by Balazs Mohai/EPA/EFE) 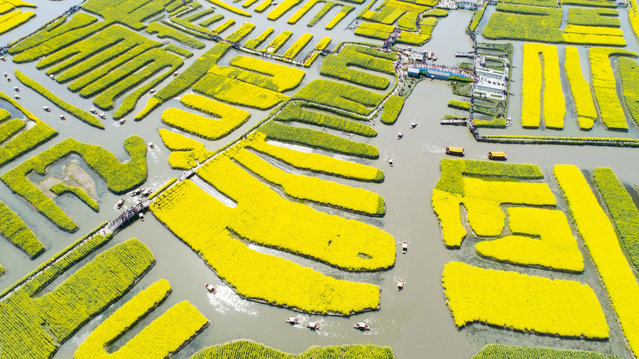 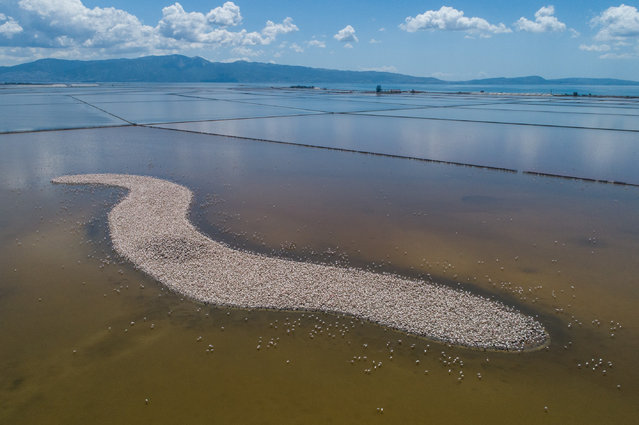 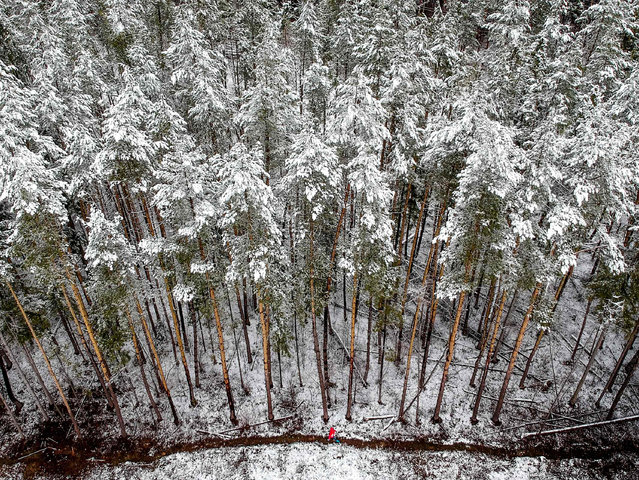 An aerial view shows a woman walking along a snow covered forest edge following a snowfall outside Moscow on April 15, 2019. (Photo by Yuri Kadobnov/AFP Photo) 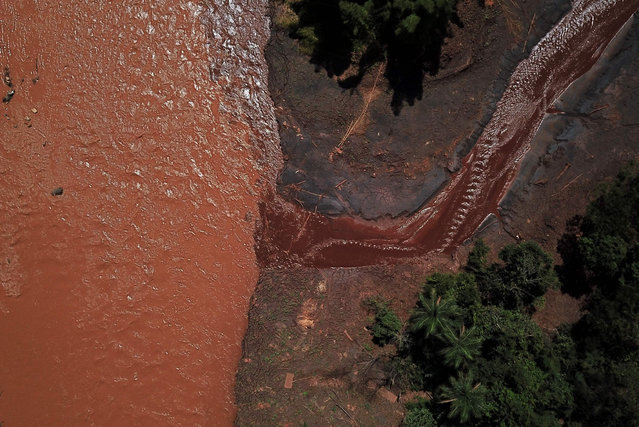 Mud reaches the Paraopeba river in Brumadinho, Minas Gerais state, Brazil on March 18, 2019, after the collapse of a dam at an iron-ore mine belonging to Brazil's giant mining company Vale on January 25, 2019. Two months after an upstream tailings dam, owned by mining giant Vale burst, spewed millions of tons of minerals-laced sludge across the countryside, Vale, government agencies and environmental groups are still assessing the impact of Brazil's worst industrial disaster on water quality downstream. (Photo by Douglas Magno/AFP Photo) 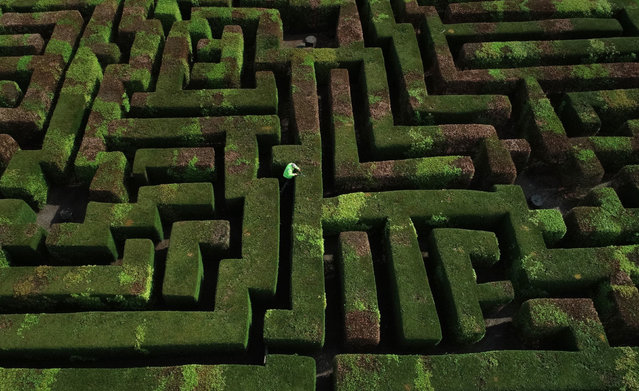 Gardener Eric Drennon tends to the maze at Traquair House in Peeblessshire, Scotland on May 1, 2019. It was planted in 1981 and is the largest hedged maze in Scotland. (Photo by Owen Humphreys/PA Wire Press Association) 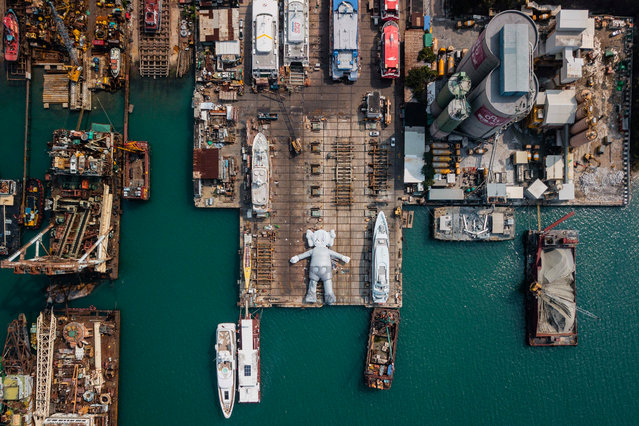 This aerial photo shows the “KAWS:HOLIDAY” “Companion” inflatable sculpture (C) by US artist and designer Brian Donnelly, known professionally as Kaws, in a shipyard in Hong Kong on March 11, 2019. Made in collaboration with locally based creative studio AllRightsReserved (ARR), the 37-metre-long (121 ft.) “KAWS:HOLIDAY” sculpture will be docked in Victoria Harbour from March 22 to 31 as part of Hong Kong Arts Month. (Photo by Anthony Wallace/AFP Photo) 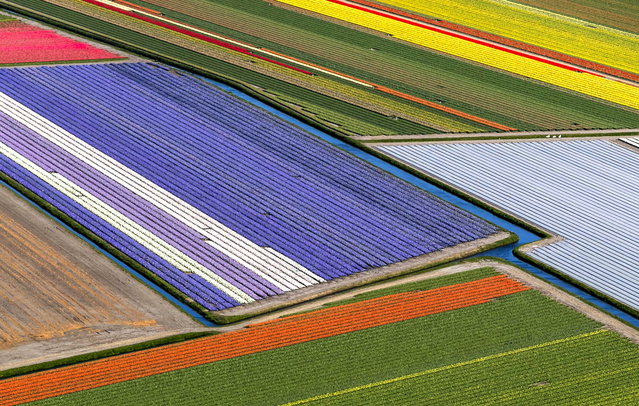 An aerial view of the flower fields of the Keukenhof in Lisse, The Netherlands, 10 April 2019. The weather forecast predicts sunny days in Lisse throughout the week. (Photo by Remko De Waal/EPA/EFE) 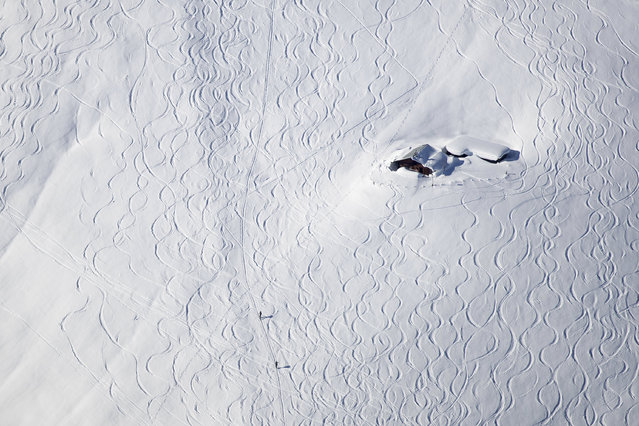 Skier make their way on a sunny day near Zell am See, Austria, Tuesday, February 5, 2019. (Photo by Matthias Schrader/AP Photo) 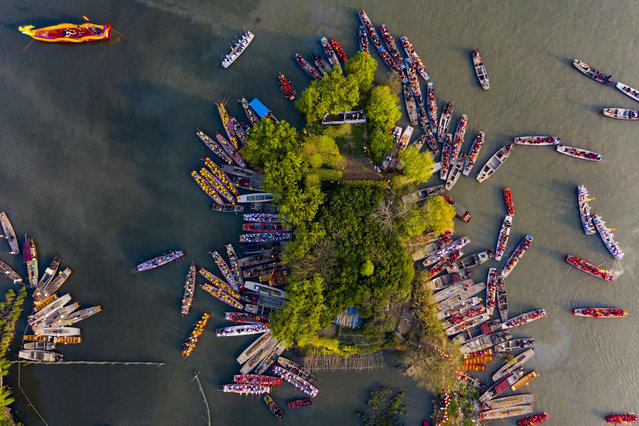 Performers on boats take part in the Qintong Boat Festival at Qin Lake National Wetland Park on April 6, 2019 in Taizhou, Jiangsu Province of China. The boat festival is held around the Qingming Festival every year, and up to 10,000 participants from nearby villages and towns, with more than 500 boats, took part in the event this year. (Photo by Tang Dehong/VCG via Getty Images) 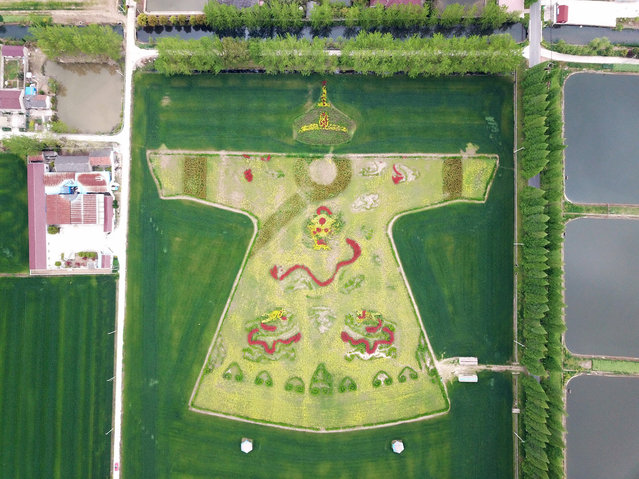 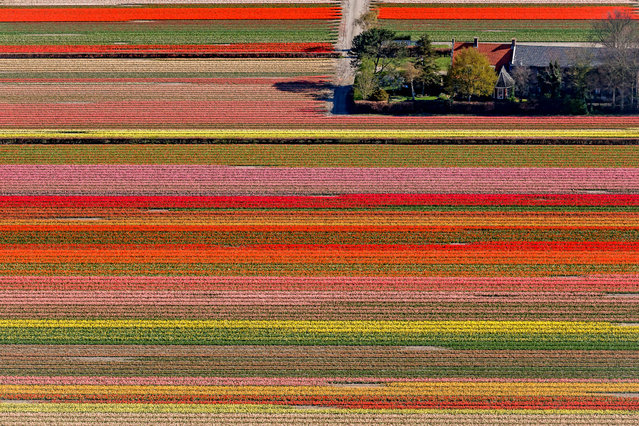 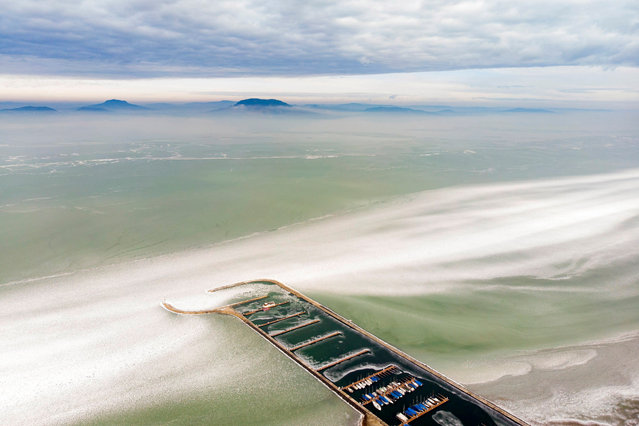 The yacht pier is enclosed with the icy water of Lake Balaton in Balatonfenyves, Hungary, 29 January 2019. (Photo by György Varga/EPA/EFE) 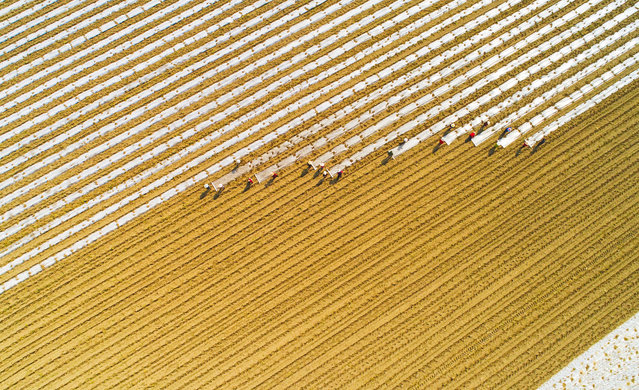 Aerial view of farmers covering corn seedlings with plastic film at a field on March 18, 2019 in Suining, Sichuan Province of China. (Photo by Liu Changsong/VCG via Getty Images) 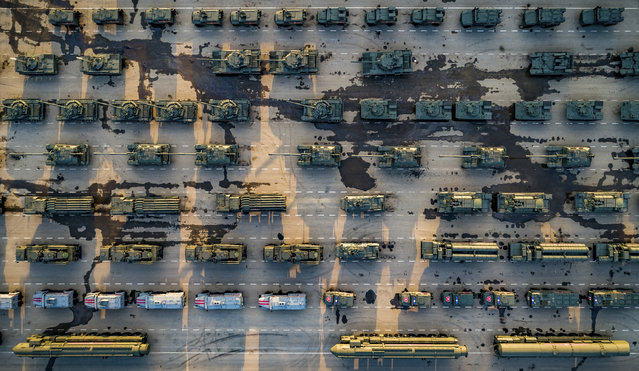 Russian military vehicles parked at a square for a rehearsal for the Victory Day military parade in Moscow, Russia, Monday, May 6, 2019. The parade will take place at Moscow's Red Square on May 9 to celebrate 74 years of the victory in WWII. (Photo by Dmitry Serebryakov)/AP Photo 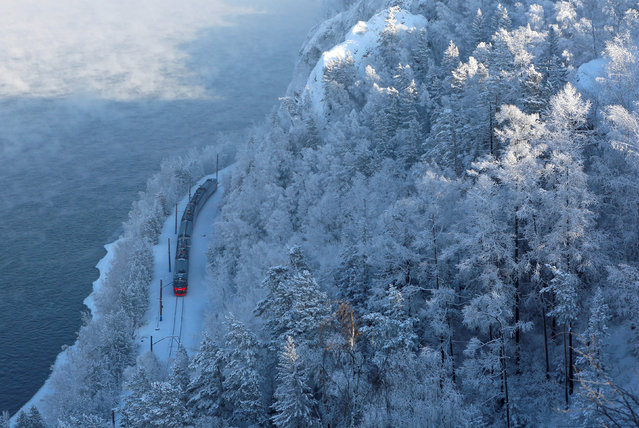 A passenger train moves along the bank of the Yenisei River in the Siberian Taiga forest covered with snow and hoarfrost outside Krasnoyarsk, Russia February 11, 2019. (Photo by Ilya Naymushin/Reuters) 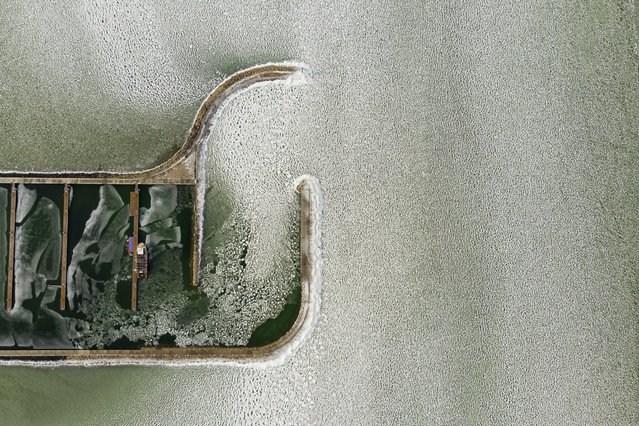 The yacht pier is enclosed with the icy water of Lake Balaton in Balatonfenyves, 155 kms (96 miles) southwest of Budapest, Hungary, Tuesday, January 29, 2019. (Photo by Gyorgy Varga/MTI via AP Photo) 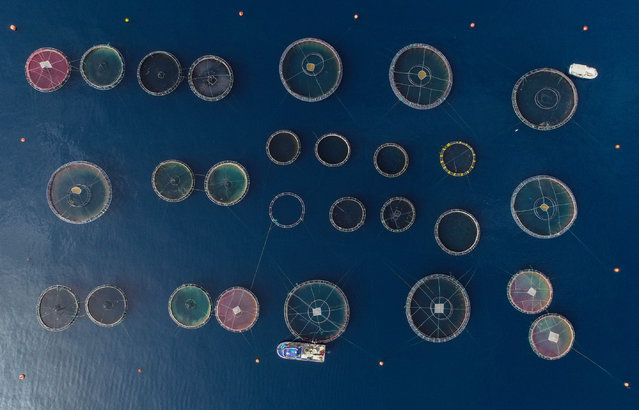 An aerial view of fish farm, raising a new breed “Egeli” fish, in Izmir's Karaburun district, Turkey on April 25, 2019. “Egeli” fish, cross breeding of sea bream and dentex, are expected to be put on sale in a year. (Photo by Mahmut Serdar Alakus/Anadolu Agency/Getty Images) 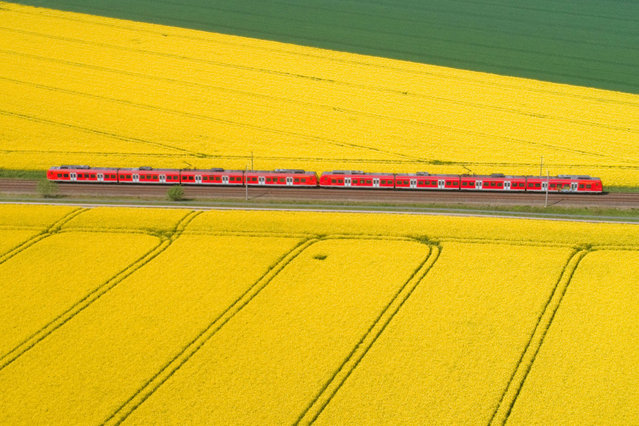