Educative Horst Wessel
“Horst Ludwig Wessel (October 9, 1907 – February 23, 1930) was a German Nazi activist who was made a posthumous hero of the Nazi movement following his violent death in 1930. He was the author of the lyrics to the song “Die Fahne hoch” (“The Flag On High”), usually known as Horst-Wessel-Lied (“The Horst Wessel Song”), which became the Nazi Party anthem and, de facto, Germany's co-national anthem from 1933 to 1945.

Wessel played the schalmei (shawm), a type of oboe popular in Germany, and he founded an SA Schalmeienkapelle (shawm band), which provided music during SA events. In early 1929, Wessel wrote the lyrics for a new Nazi fight song (Kampflied), which was first published in Goebbels's newspaper Der Angriff in September, under the title “Der Unbekannte SA-Mann” (the Unknown SA-Man). This song later became known as “Die Fahne hoch” and as the “Horst Wessel Song”. It was later claimed by the Nazis that Wessel also wrote the music, but the tune was likely taken from a World War I German Imperial Navy song, and is probably originally a folk song.

At that time, the Alexanderplatz, the centre of Berlin's nightlife, was part of the territory of Wessel's SA troop. In September 1929, he met Erna Jänicke, an 18-year-old prostitute, in a bar. Soon he moved into her apartment in Große Frankfurter Straße (today Karl-Marx-Allee). The landlady was Elisabeth Salm, whose late husband had been an active Communist. After a few months, there was a dispute between Salm and Wessel over unpaid rent.

In the evening of 14 January 1930, Wessel answered a knock on his door, and was shot in the face by an assailant who then fled the scene. Wessel lingered in hospital until he died on 23 February. Albrecht Höhler, an active member of the local Communist Party (KPD) branch was sentenced to six years imprisonment for the shooting, and was executed by the Gestapo after the Nazi accession to power in 1933. The KPD, however, denied any knowledge of the attack and said it resulted from a dispute over money between Wessel and his landlady. It is possible that Salm asked her late husband's old comrades to help deal with her recalcitrant tenant. Another version says Wessel's murderer was a rival for the affections of Jänicke. It is also possible the shooting was revenge by local Communists for Wessel's alleged role in the murder of a 17-year-old Communist, Camillo Ross, earlier in the day”. – Wikipedia 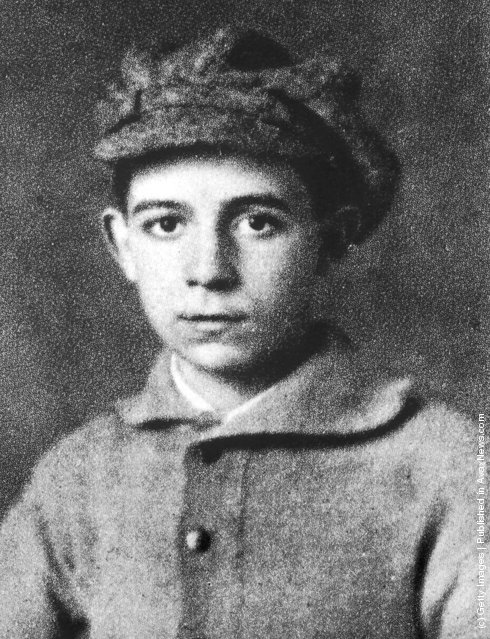 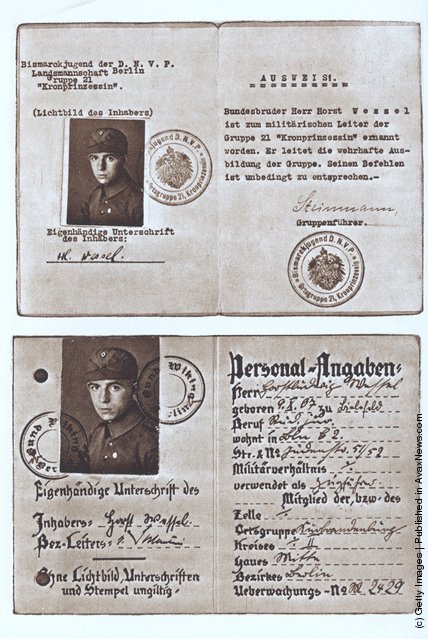 The documents of Nazi activist Horst Wessel, including his membership papers of the Bismarckjugend, the youth movement of the DNVP (German National People's Party), and the Bund Wiking or Viking League, a paramilitary group, circa 1925. Wessel joined the Bismarckjugend in 1922 and the Viking League in 1923. (Photo by Henry Guttmann/Hulton Archive/Getty Images) 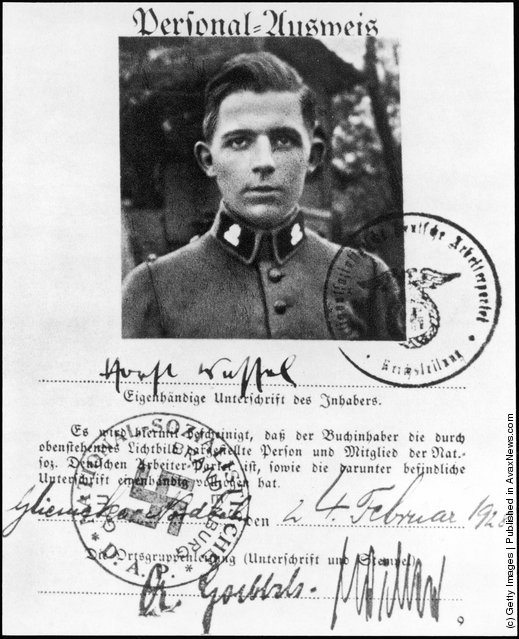 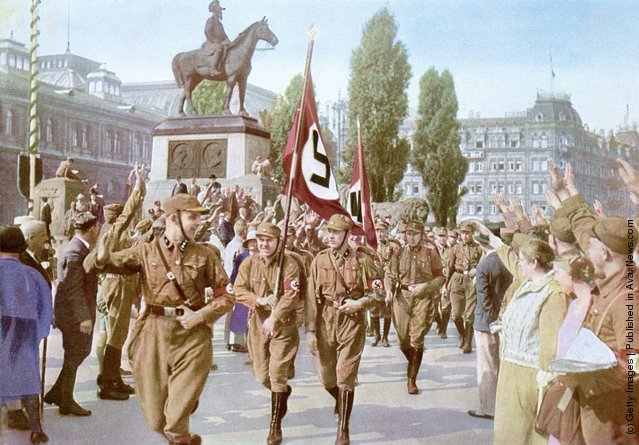 German Nazi activist Horst Wessel (left) at the head of a parade of S.A. stormtroopers, or “brownshirts”, in Nuremberg, Germany, 1929. (Photo by Hulton Archive/Getty Images) 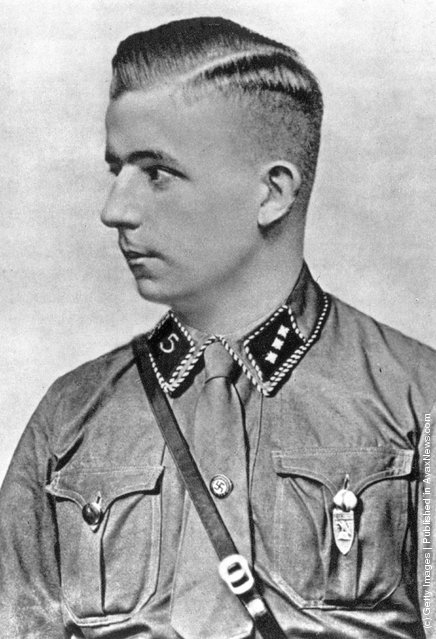 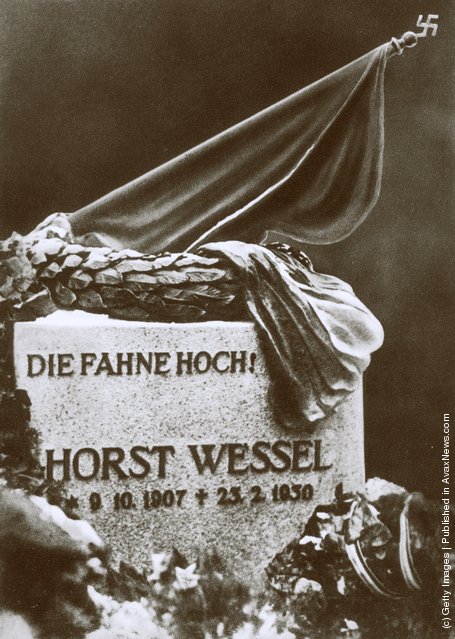 The grave of German Nazi activist Horst Wessel in graveyard of the Nikolaikirche, Berlin, 1933. The stone is inscribed “Die Fahne Hoch” (“Raise The Flag High”) – the official title of the Nazi Party anthem (also known as the “Horst Wessel Song”), to which Wessel wrote the lyrics. Photograph from a biography of Wessel by his sister, Ingeborg Wessel, published in 1933. (Photo by Henry Guttmann/Hulton Archive/Getty Images) 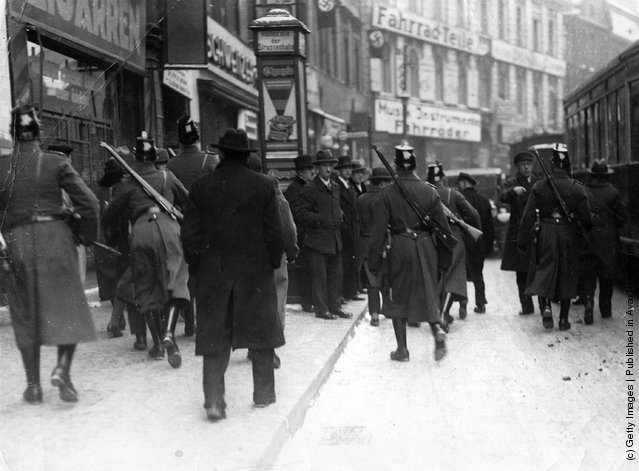 German police protect demonstrators commemorating the death of the Nazi Horst Wessel near Buelow Platz, Berlin. There were clashes between Nazis and Communists. (Photo by Keystone/Getty Images). 1933 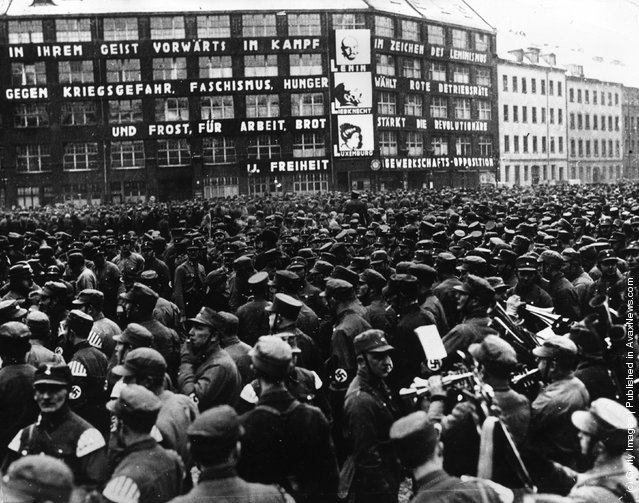