Educative Nuclear Football
“The nuclear football (also known as the atomic football, the president's emergency satchel, the button, the black box, or just the football) is a briefcase, the contents of which are to be used by the President of the United States of America to authorize a nuclear attack while away from fixed command centers, such as the White House Situation Room. It functions as a mobile hub in the strategic defense system of the United States. It is a metallic Zero Halliburton briefcase carried in a black leather “jacket”. The package weighs around 45 pounds (20 kilograms). A small antenna protrudes from the bag near the handle.

If the President (who is Commander-in-Chief) decided to order the use of nuclear weapons, he would be taken aside by the “carrier” and the briefcase opened. Then a command signal or “watch” alert would be issued to the Joint Chiefs of Staff. The President would then review the attack options with the aide and decide upon a plan which could range from a single cruise missile to multiple ICBM launches. These are preset war plans developed under the SIOP (Single Integrated Operational Plan) which at one time represented the entire joint US/UK plan for “disassembling” the USSR by means of nuclear weapons. It is unknown if it uses SATCOM (satellite communications), VLFT (very low frequency transmission) or VHFT (very high frequency transmission), although the briefcases have been seen with an antenna protruding from them on more than one occasion. Next, using whatever communications technology the satchel has, the aide would then presumably make contact with the National Military Command Center or, in a retaliatory strike situation, multiple airborne command posts (who likely fly Boeing E-4B) and/or nuclear armed submarines.

Before the order can be processed by the military, the President must be positively identified using a special code issued on a plastic card, nicknamed the “biscuit”. The United States has a two-man rule in place, and while only the President can order the release of nuclear weapons, the order must be confirmed by the Secretary of Defense. Once all the codes have been verified, the military would issue attack orders to the proper units. These orders are given and then re-verified for authenticity.

The football is carried by one of the rotating presidential military aides, whose work schedule is described by a top-secret rota (one from each of the five service branches). They are occasionally physically attached to the briefcase via a security cable around the wrist. This person is a commissioned officer in the U.S. military, pay-grade O-4 or above, who has undergone the nation's most rigorous background check (Yankee White). These armed officers are required to keep the football readily accessible to the President at all times. Consequently, an aide, football in hand, is always either standing or walking near the President or riding in Air Force One, Marine One, or the presidential motorcade with the President.

There are three such “footballs” in existence. The first travels with the President, a spare is kept at the White House, and the third is with the Vice President”. – Wikipedia 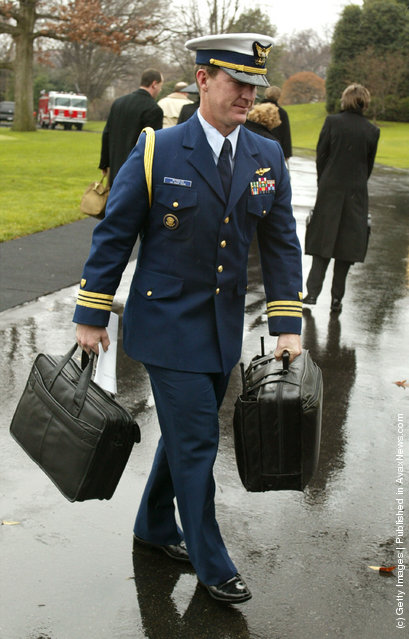 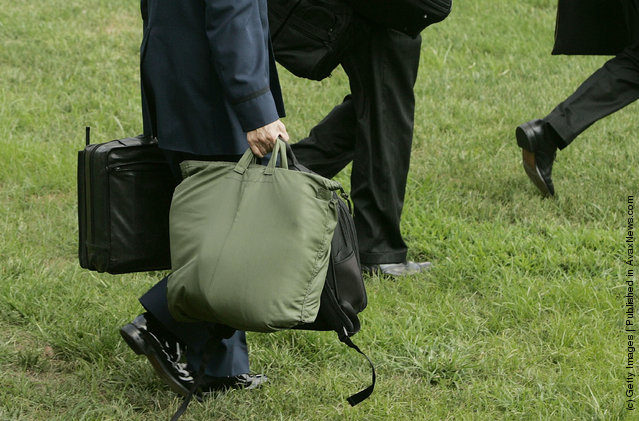 A member of the U.S. military carries the “football”, the case in his left hand, as he walks behind U.S. President George W. Bush toward Marine One on the South Lawn of the White House August 2, 2005 in Washington, DC. (Photo by Mark Wilson/Getty Images) 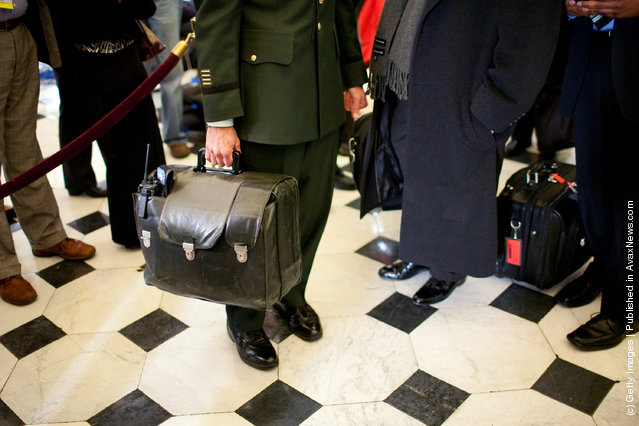 A military aide carries the nuclear football, with the nation's nuclear launch codes, through Statuary Hall as President Barack Obama arrives at the U.S. Capitol for his address to a joint session of Congress on February 24, 2009 in Washington, DC. (Photo by Brendan Hoffman/Getty Images) 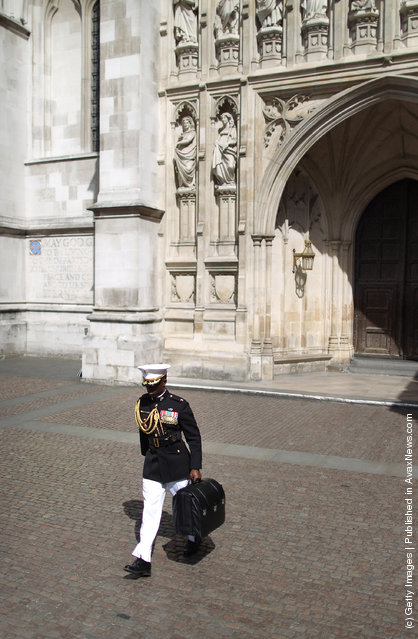