In this handout image released from the Hubble Space Telescope the Eagle Nebula is seen, April 25, 2005. Released for the Hubble's 15th anniversary. Nasa's Space Telescope has orbited the Earth for 15 years and has taken more than 700,000 images of the cosmos. This image is one of the sharpest images Hubble has ever produced, taken with the newest camera. (Photo by Hubble Space Telescope/Nasa via Getty Images). April 25 2011 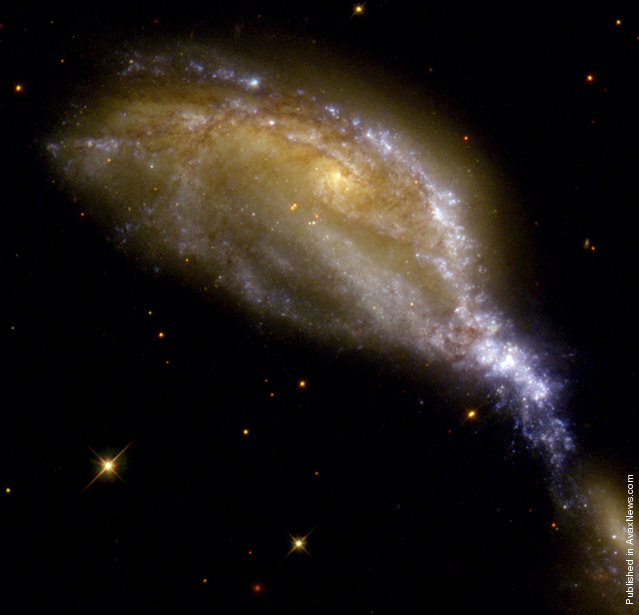 An image captured by the Hubble Space Telescope, released by NASA November 2, 2000, shows a striking example of a galaxy collision more than 200 million light year away, in NGC 6745. The yellowish center of the photo shows a large spiral galaxy with its core still intact, colliding with a smaller galaxy seen in the bright blue sections of the image. The blue light shows the distinct path taken by the smaller galaxy during the encounter, as the galaxies did not merely interact gravitationally as they passed one another, but actually collided. (Photo by NASA/Newsmakers) 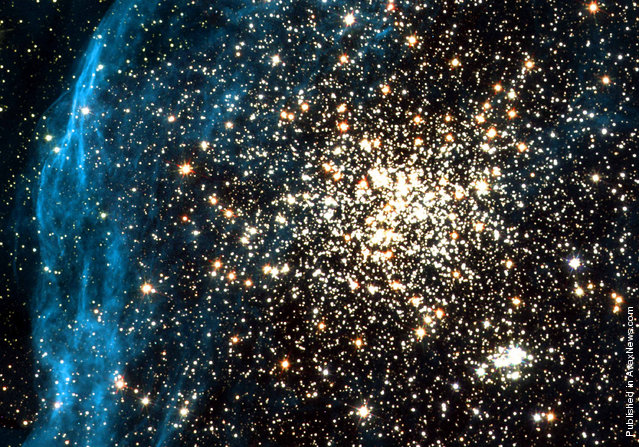 This image recorded by the Hubble telescope on July 10, 2001 shows two clusters of stars, called NGC 1850, located in a neighboring galaxy called the Large Magellanic Cloud. The photo's centerpiece is a young, “globular-like” star cluster – a type of object unknown in our own Milky Way Galaxy. (Photo by NASA/Getty Images) 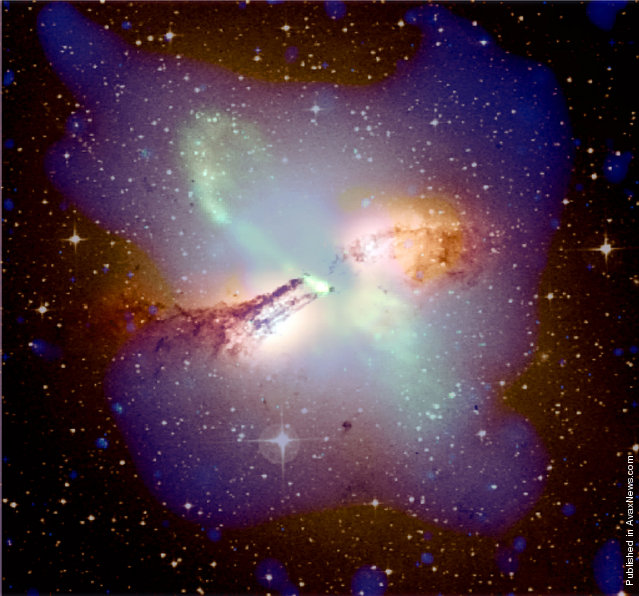 A composite X-ray (blue), radio (pink and green), and optical (orange and yellow) image of the galaxy Centaurus A is shown in this image from space. A broad band of dust and cold gas is bisected at an angle by opposing jets of high-energy particles blasting away from the supermassive black hole in the nucleus. The arcs of multimillion-degree gas appear to be part of a projected ring 25,000 light years in diameter. The size and location of the ring indicates that it may have been produced in a titanic explosion that occurred about ten million years ago. (Photo by NASA/Getty Images) 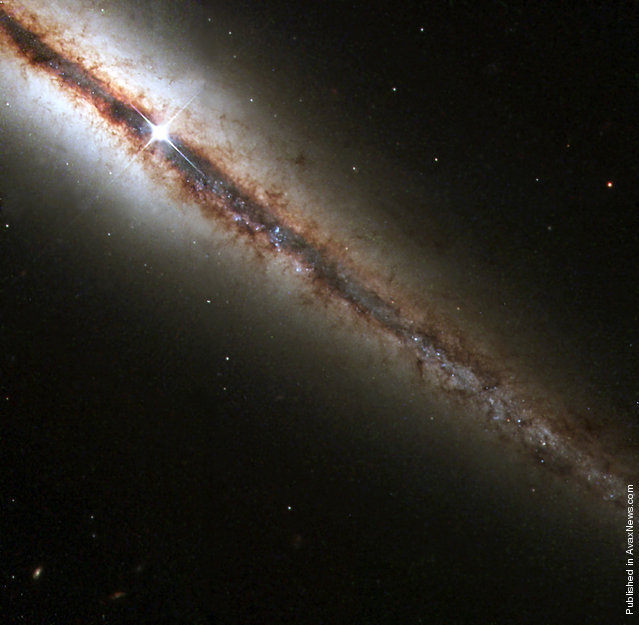 An image produced by the Hubble telescope of the perfectly “edge-on” galaxy, or NGC 4013, March 1, 2001. This new Hubble picture reveals, with great detail, huge clouds of dust and gas extending along, as well as far above, the galaxy's main disk. NGC 4013 is a spiral galaxy, similar to the Milky Way, lying some 55 million light-years from Earth in the direction of the constellation Ursa Major. Viewed face-on, it would look like a nearly circular pinwheel, but NGC 4013 happens to be seen edge-on from our vantage point. Even at 55 million light-years, the galaxy is larger than Hubble's field of view, and the image shows only a little more than half of the object, albeit with unprecedented detail. (Photo Courtesy of NASA/Newsmakers) 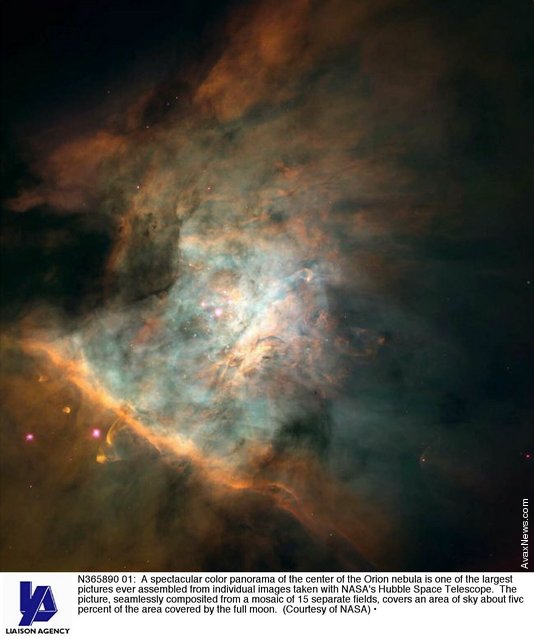 A spectacular color panorama of the center of the Orion nebula is one of the largest pictures ever assembled from individual images taken with NASA's Hubble Space Telescope. The picture, seamlessly composited from a mosaic of 15 separate fields, covers an area of sky about five percent of the area covered by the full moon. (Courtesy of NASA) 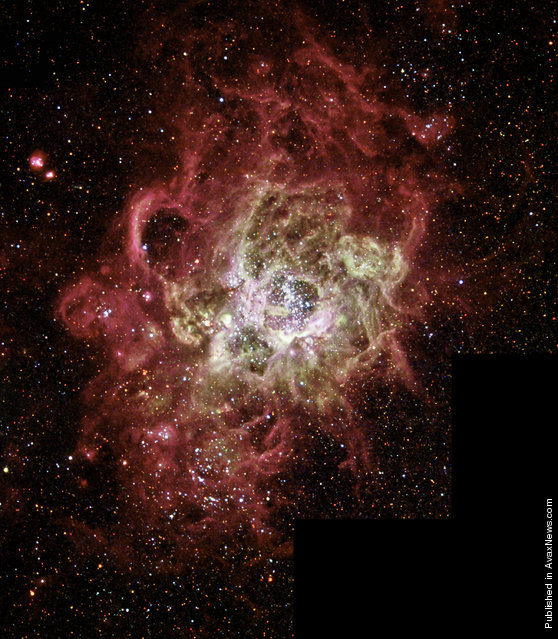 This festively colorful nebula, called NGC 604, is one of the largest known seething cauldrons of star birth in a nearby galaxy. This star-birth region contains more than 200 brilliant blue stars within a cloud of glowing gases some 1,300 light-years across, nearly 100 times the size of the Orion Nebula. (Photo by NASA via Getty Images)
Edit Del
28 Feb 2015 22:33:00, post received 0 comments
Publication archive:
←   →
Popular tags:
All tags
Last searches: